Feel 100% satisfied with your purchase -- with no restocking fees & no return shipping costs* within 30 days of delivery. Learn More
This item is currently out of stock and it may or may not be restocked.
Out of Stock
Add To ListFound on 55 wish lists 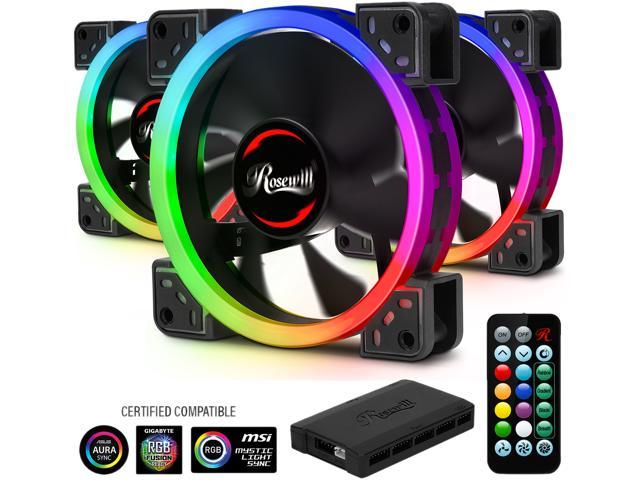 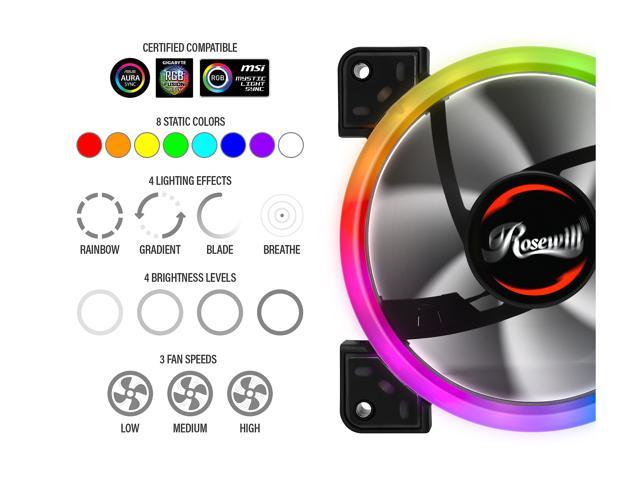 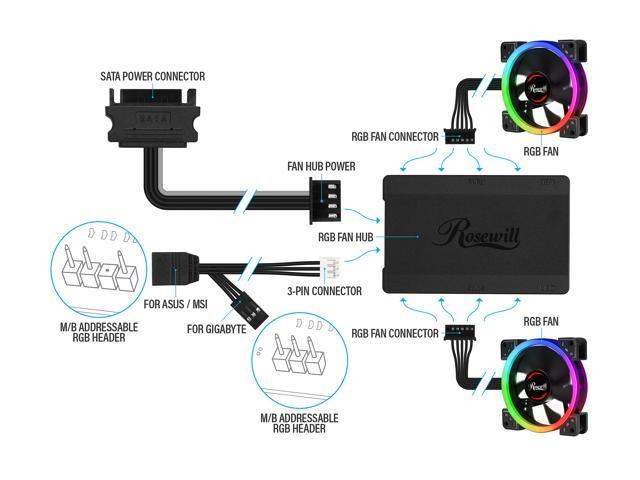 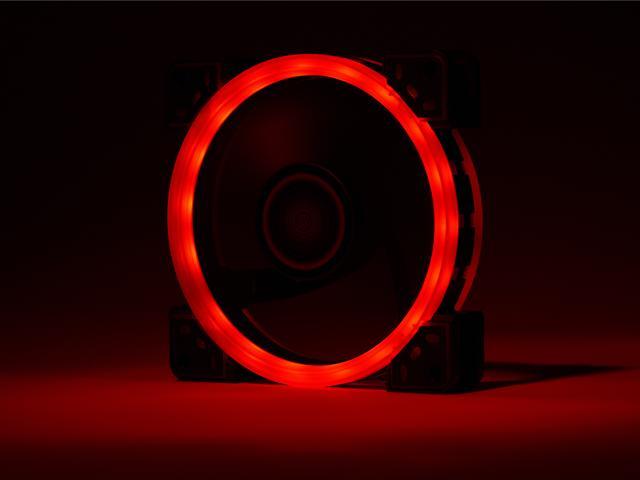 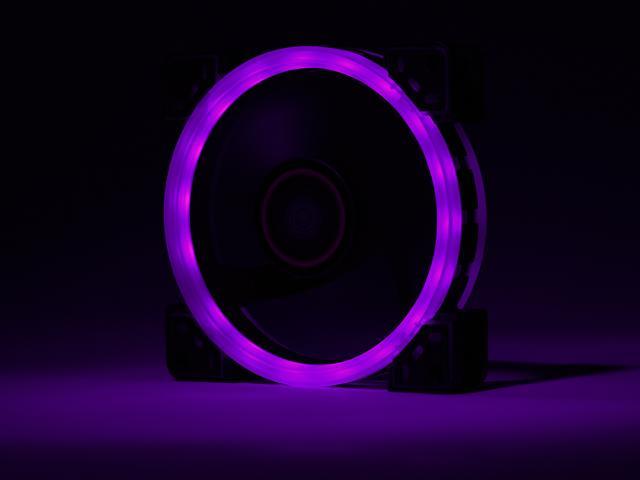 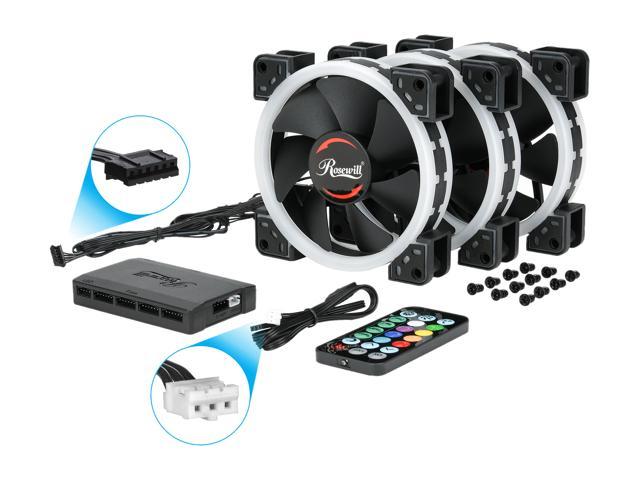 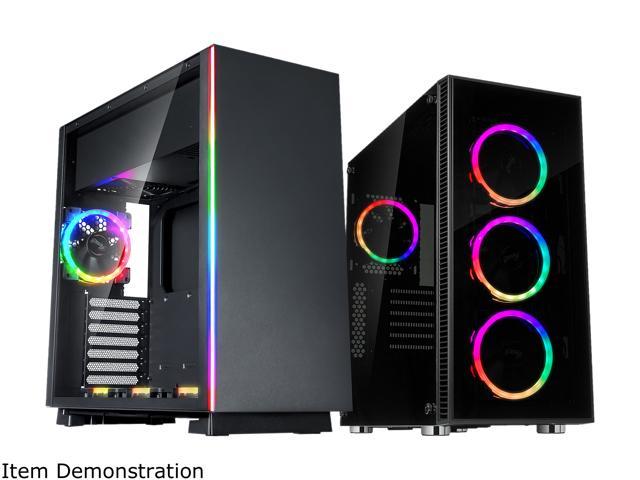 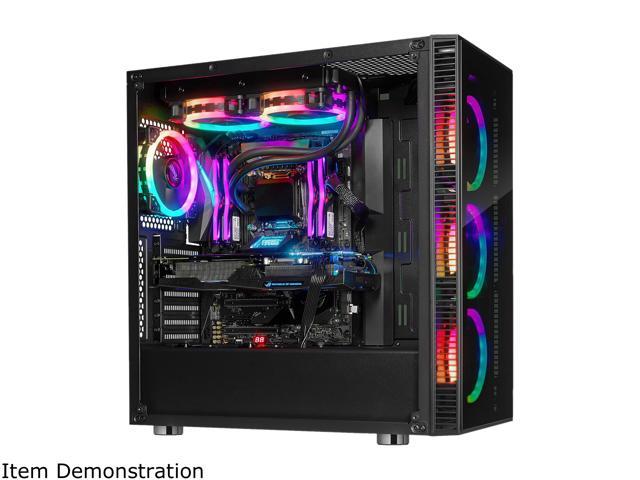 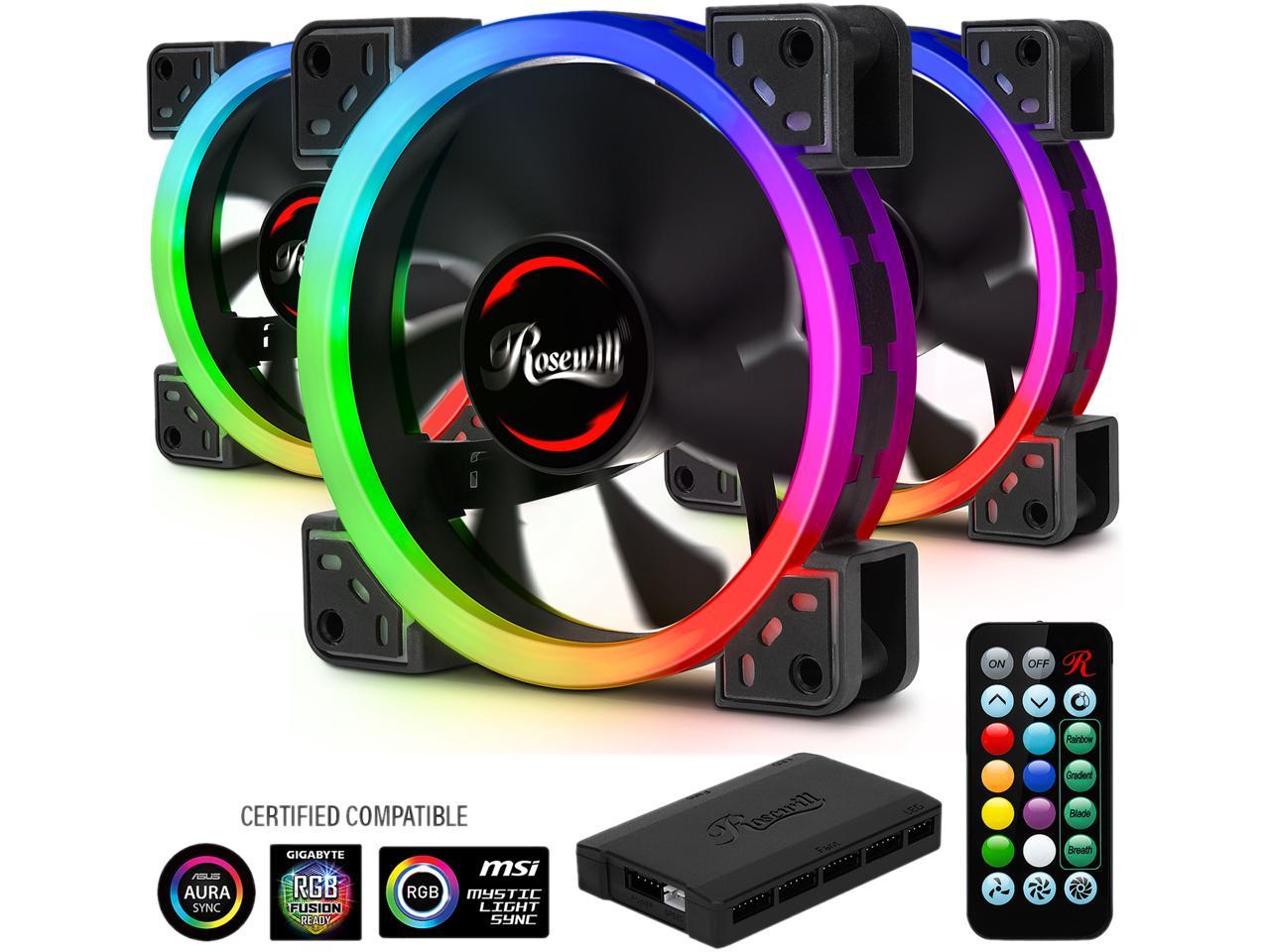 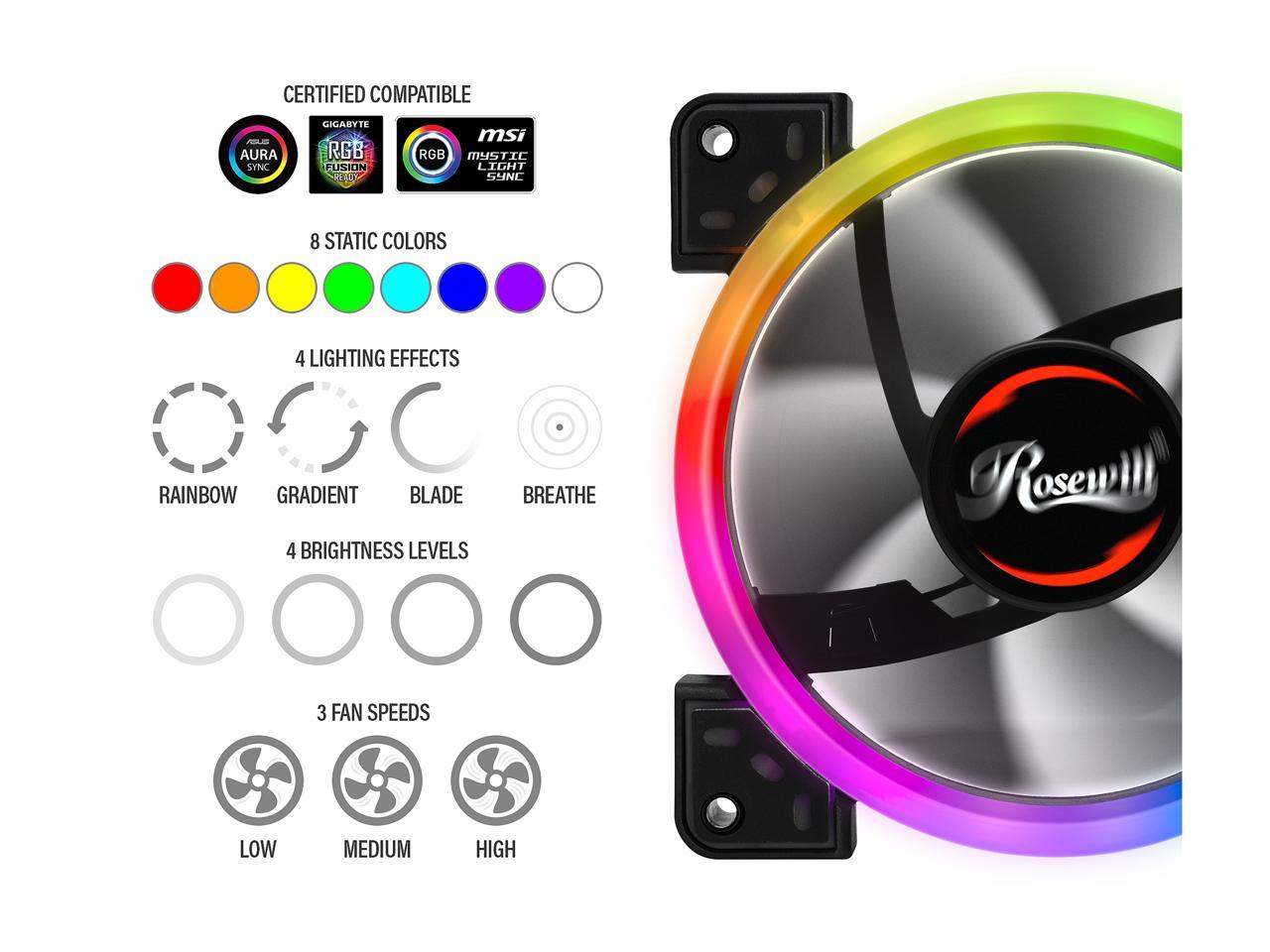 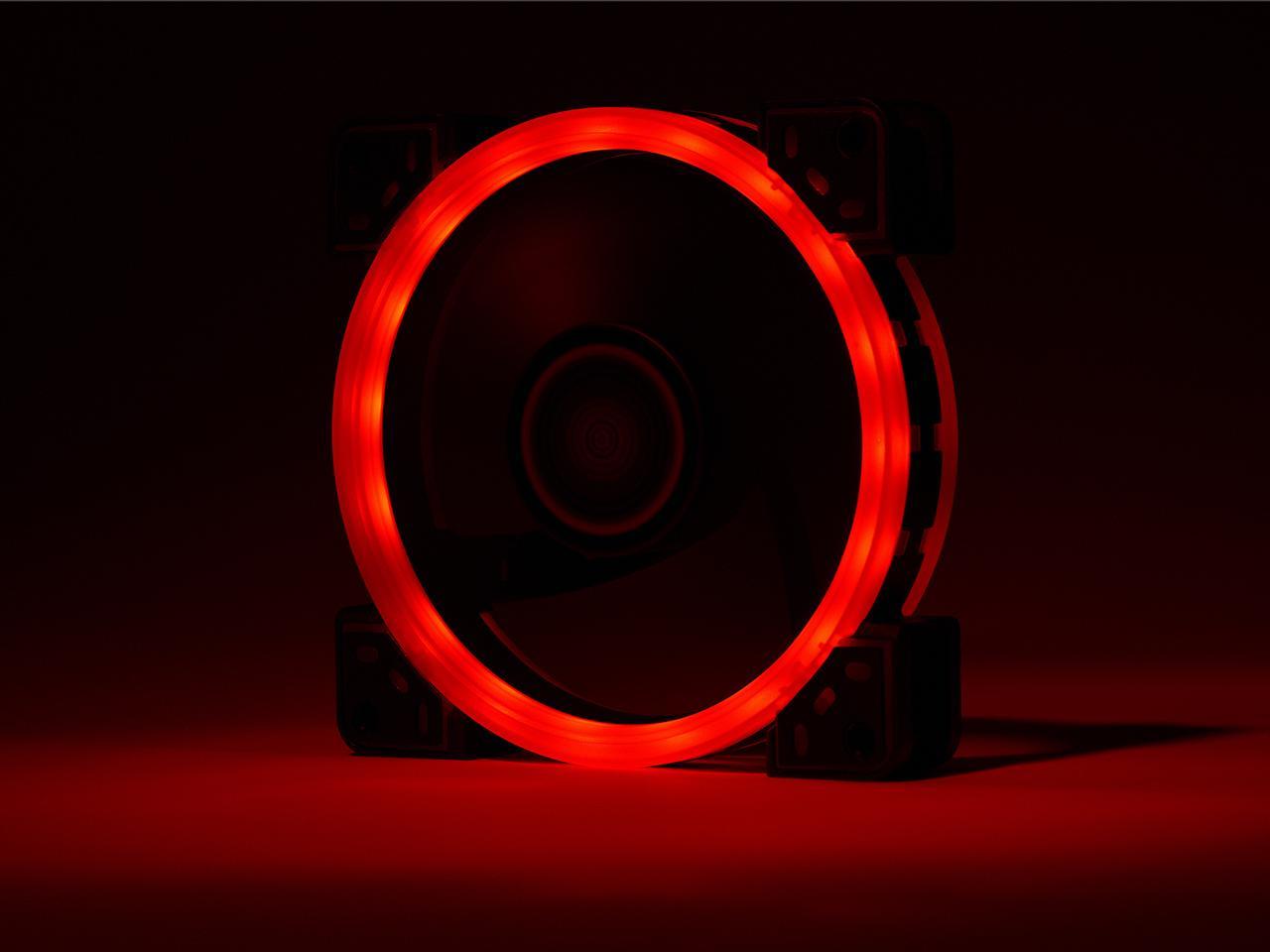 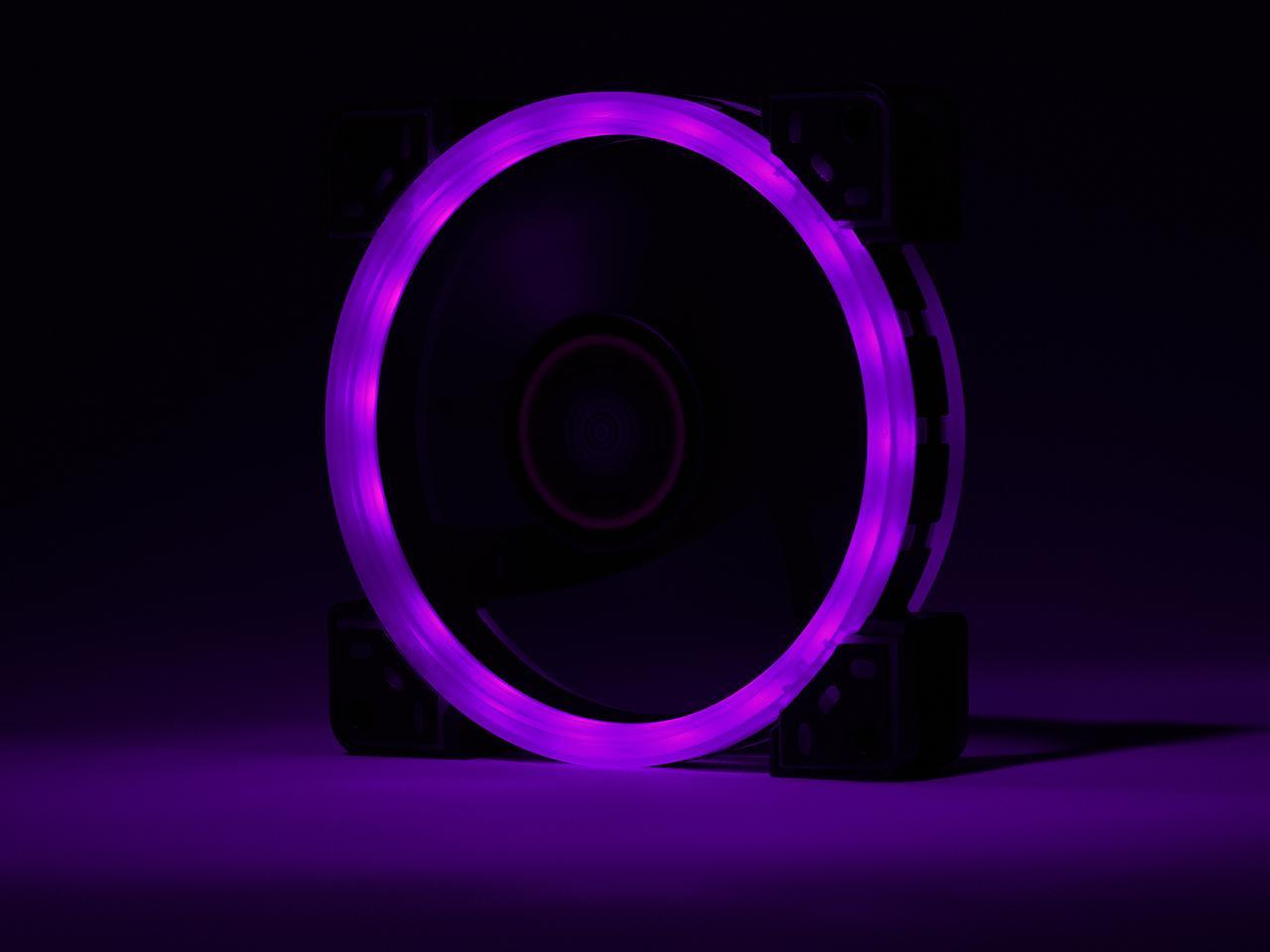 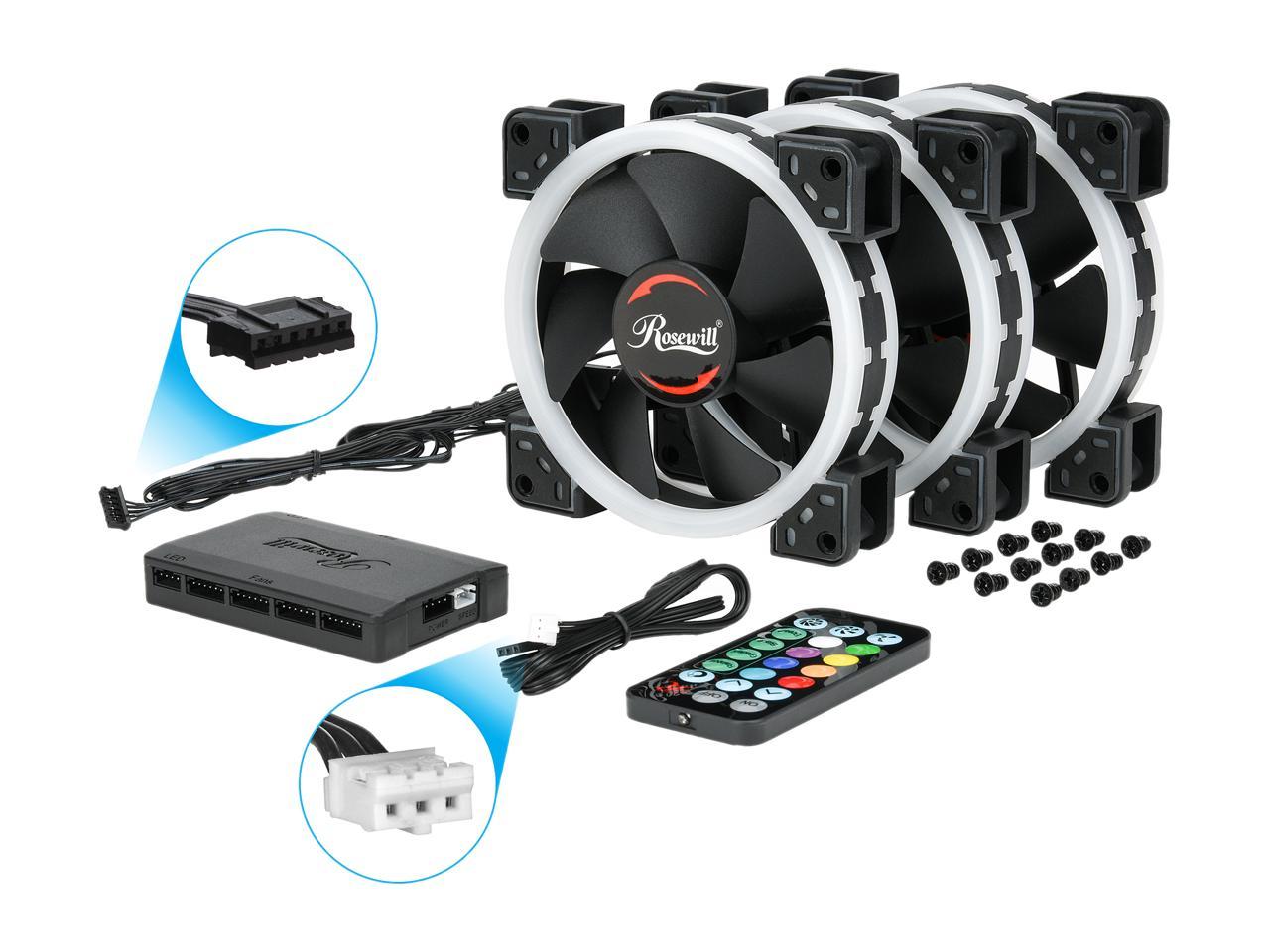 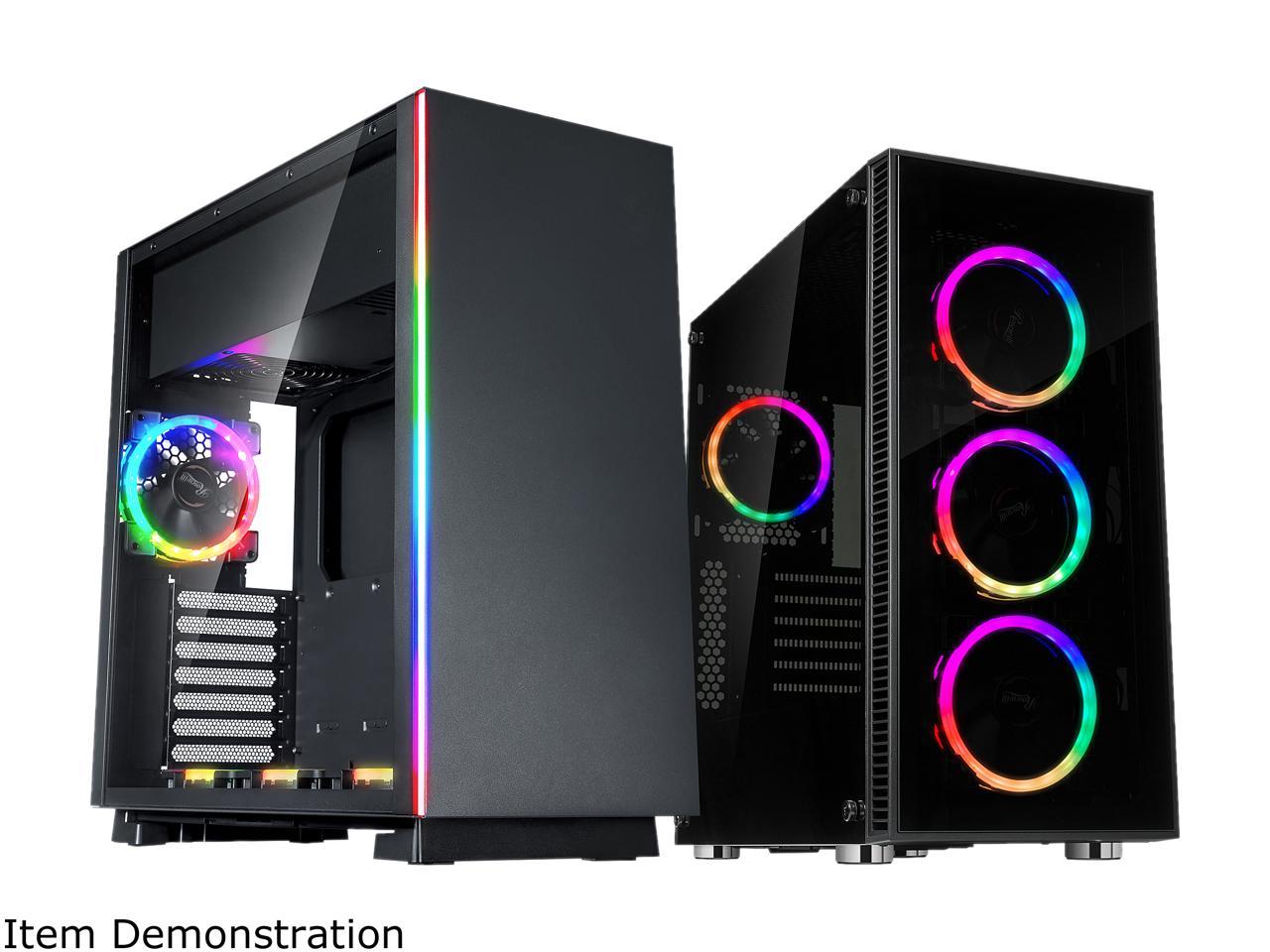 Connect up to eight fans and two LED light strips into the included hub for maximum cooling potential, increased airflow and enhanced aesthetics.

Optimize airflow and keep PC temperatures cool via the low noise, increased-lifespan, rifle-bearing, dual-ring RGB LED fans that have been designed for excellent performance and style. These fans come pre-installed inside the PRISM S500 and CULLINAN V500 case models.

Learn more about the Rosewill RGBF-S12001

Pros: Got these to finish up my 3300x build, neat that the hub is magnetic too. Oh and satisfies noice wise too (quiet)

Cons: They could be a little brighter but still work great and looks nice.

Cons: THEY DO NOT SYNC UP WITH AURA SYNC. Even though it says they do. If they did it would be 5 eggs all day.

Cons: Screws seemed very slightly short. Wish there was a 4 speed options instead of 3.

Overall Review: Software/Motherboard/Hub feature only works on new 2018-2019 Motherboards, that provide it. But Doesn't matter as long as you have the remote, all you need is a Sata Power cable. I unplugged the 3 pin connector from my motherboard&Hub, because it was causing my computer to not power up, it kept shutting down as soon as i hit the power button. Assuming because my motherboard is from 2013, and not 2018-2019 lol. So all i have plugged into the hub is the sata power cable, and default color is blue, and remote works at a pretty decent distance. Had decent stock fans, replaced 2 side panels, and 1 rear exhaust fans. Even with the new Rosewill fans @ low speed, Speccy said my temps went from between 42-46 C, down to 31-33c @ idle. Medium speed , temps were at between 29-31c for CPU/GPU , 27c for SSD High speed , temps were at between 27-30 for cpu/gpu, and 24c for ssd. so dropped nearly 15-16C @ max fan speed. Can't wait to get a 140mm front intake, and top exhaust fan. and aftermarket CPU fan. Running a i5-3570k cpu, on a cheap 44$ Biostar motherboard. 2018 , GTX 1080 GPU 7 years, and still improving in gaming style !

Cons: 3 quadrants of one of the fans was stuck on blue and, won't come back on after cycling the power.

Overall Review: I haven't called customer service yet, I will update with my thoughts on how that goes and how the replacement functions if I get one.

Manufacturer Response:
Dear Customer, I am so sorry to hear your RGBF-S12001 is defective. Please contact us with an electronic copy of order invoice and we can further assist you with a replacement of the RGBF-S12001. We do care about your feedback and will continue improving our products in future. Phone: 1- 800-575-9885 Email: rma@rosewill.com Email2: techsupport@rosewill.com Thanks, Rosewill Customer Care
Johnathon S.
Ownership: 1 day to 1 week
Verified Owner
Awesome value2/8/2019 10:08:40 AM

Pros: - They look great - Works with aura sync. No problems working with my x470f board. - Light is diffused very well within the plastic ring, you can still make out the individual LED's but it isn't that bad. - No rattling from vibration, looks like they have rubber inserts around the mounting holes. - Fairly quiet. They're not whisper quiet but they're not obnoxiously loud on their default setting. - Includes fan hub and remote. - Magnets on the bottom of the hub feel pretty strong (one magnet per corner of the hub)

Cons: - Fan hub feels kinda cheap: The internal PCB moves around ever so slightly inside it's case. - Fans use a proprietary connection from what I can tell. - Takes a bit of force to properly install the fan plugs into the hub. Had me worried that I wasn't properly lined up with the hub and possibly bending pins. In the end I got all plugs inserted with no issues. Makes me feel better knowing that the fan plugs aren't going to fall out but worried during the install lol. - Only way to control fan speed is with the remote from what I see. It runs off SATA power and there wasn't a plug for chassis fan headers. Not knocking it but would be nice if Rosewill added the option to have the fans controlled by a chassis fan header.

Overall Review: Every product has pros and cons based on needs. Overall I'm very pleased with these fans. I chose this kit because I wanted sync compatibility with my motherboard without the need for extra software. These are a great alternative to the more expensive sets. If you want good performance, awesome looking rgb and don't want to pay a premium.....I definitely recommend trying out these fans.

Pros: Beautiful led rings front and back, many settings to choose from via remote including fan speed and light modes. Quiet on the first two settings. Noisy at full speed but they push a lot of air on the second setting as it is. Very solid feeling magnetic fan hub.

Cons: Maybe I just got a bad batch of fans, or maybe it's quality control, but only one of the three fans came without issue. One fan has quite the audible bearing failure noise and would not even turn at first. I had to mount it on the back of the case to not hear it rattling. Another fan has a failed LED that flickers or presents a different color than chosen.

Overall Review: This is a great looking setup for the money. Like I stated, I may have just had bad luck. As others seem to have had great experiences with this set, I'd say buy it, as it is a great value. As I don't have the time or patience for the RMA process, I'll have to make due with what I have.

Pros: -3 speed fan -the light is awesome -easy to setup

Overall Review: -i would recommend it

Pros: Keeps my rig in the mid 60's °C on highest settings for 12 hours of gameplay. Never over heating, also fans work with my Mb MSI B550-pro so I can have my lights all in sequence together. Lights are bright and beautiful, love the look and quality.

Cons: Fans are a little loud but for the price I'm not complaining, especially with headphones on, I can't notice it at all.

Overall Review: Have had these fans for about a month and love them. They'll be my go to for any future rig or replacements.