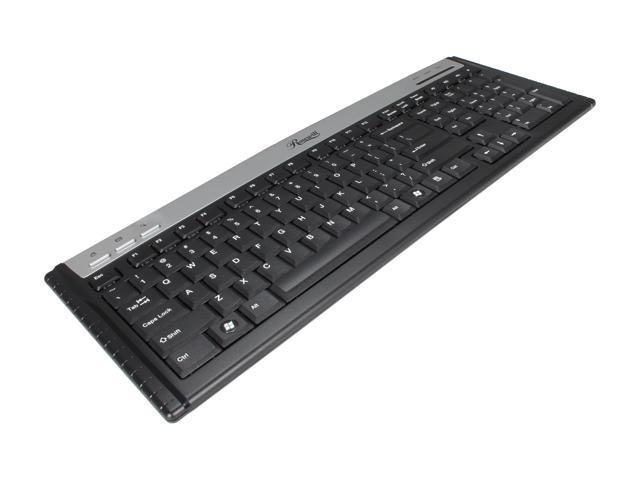 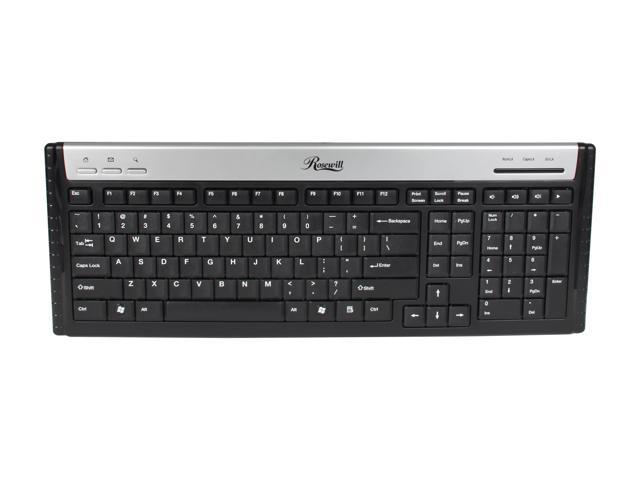 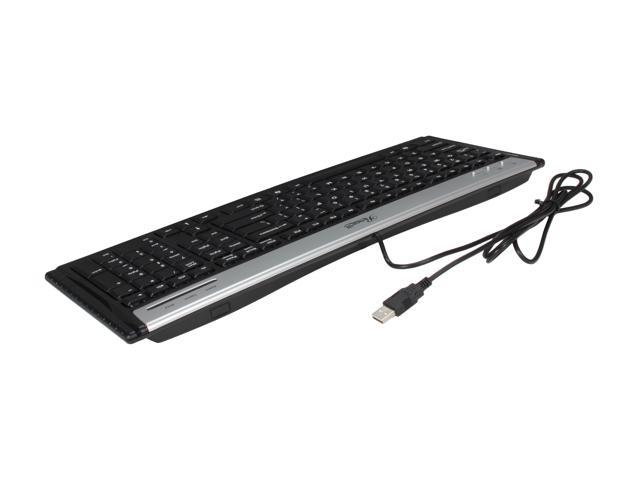 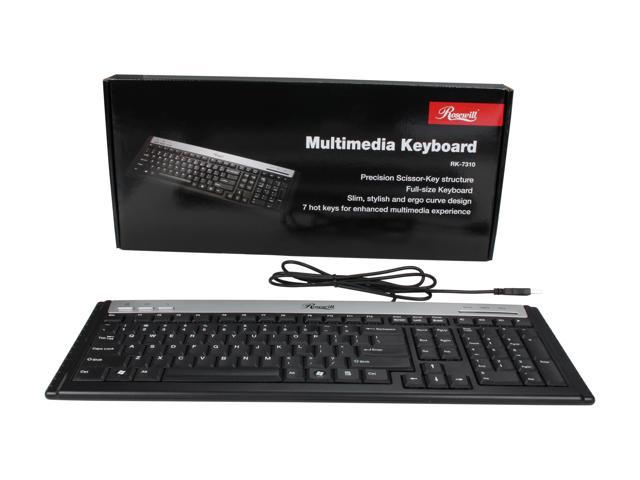 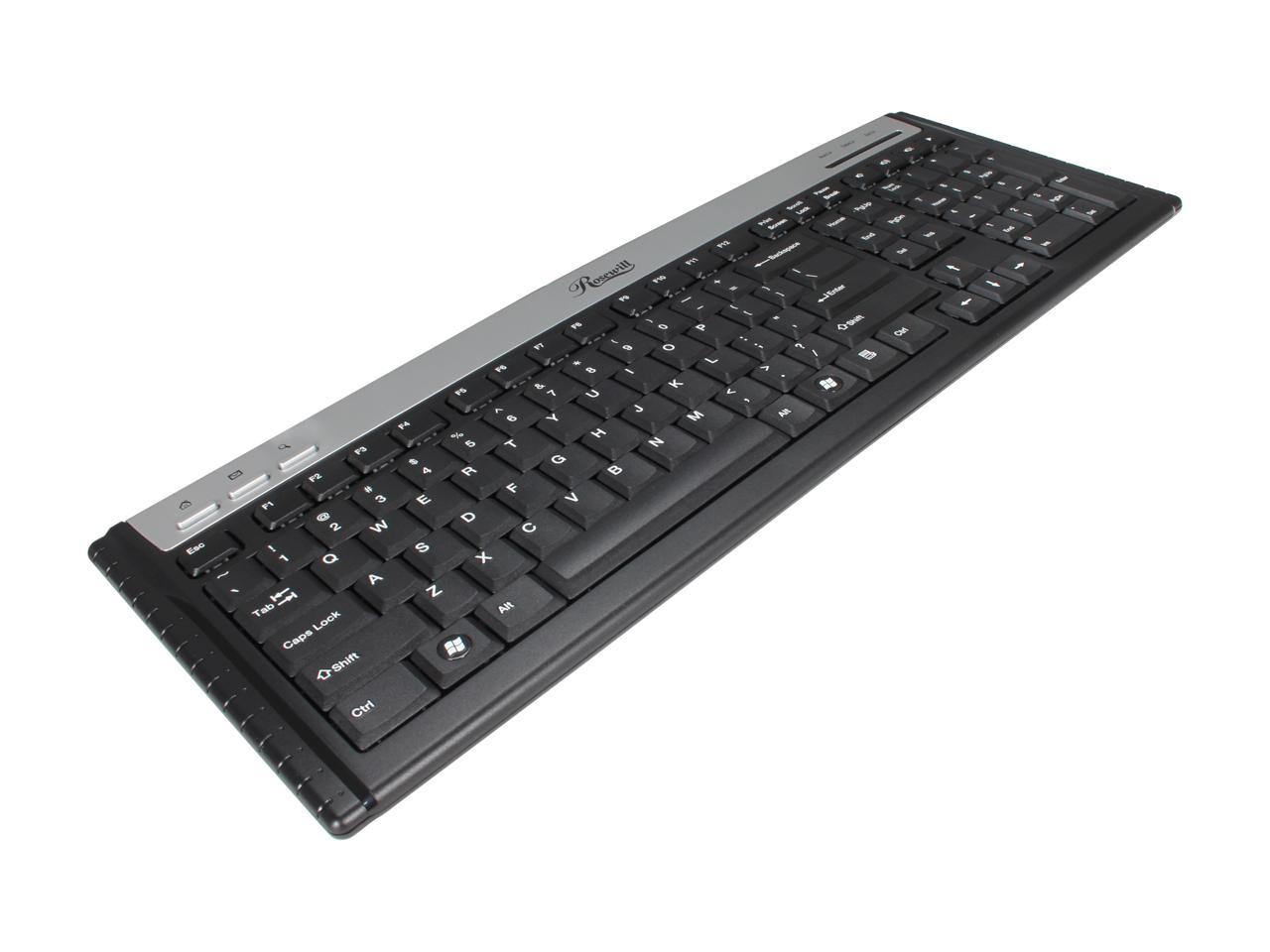 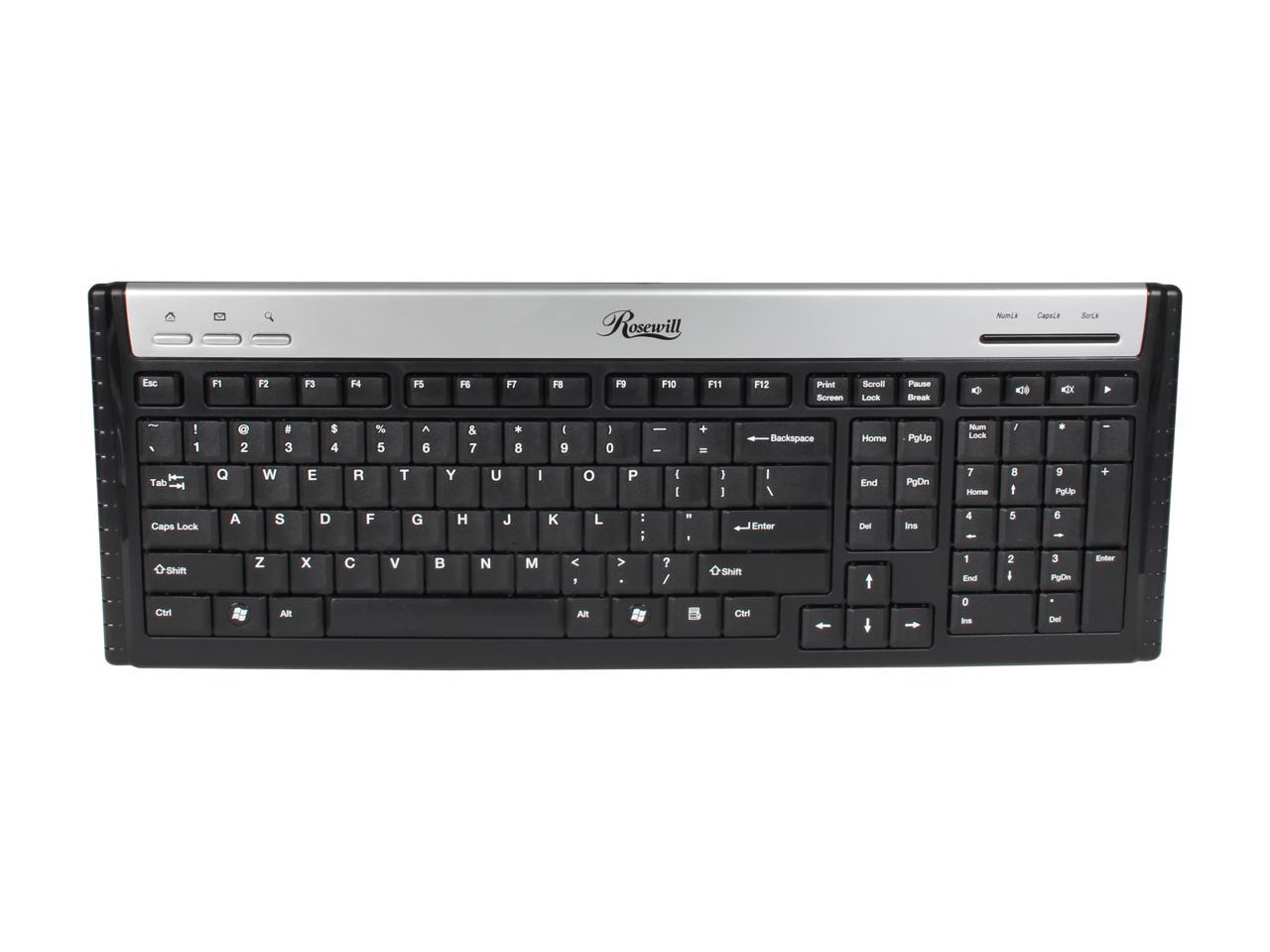 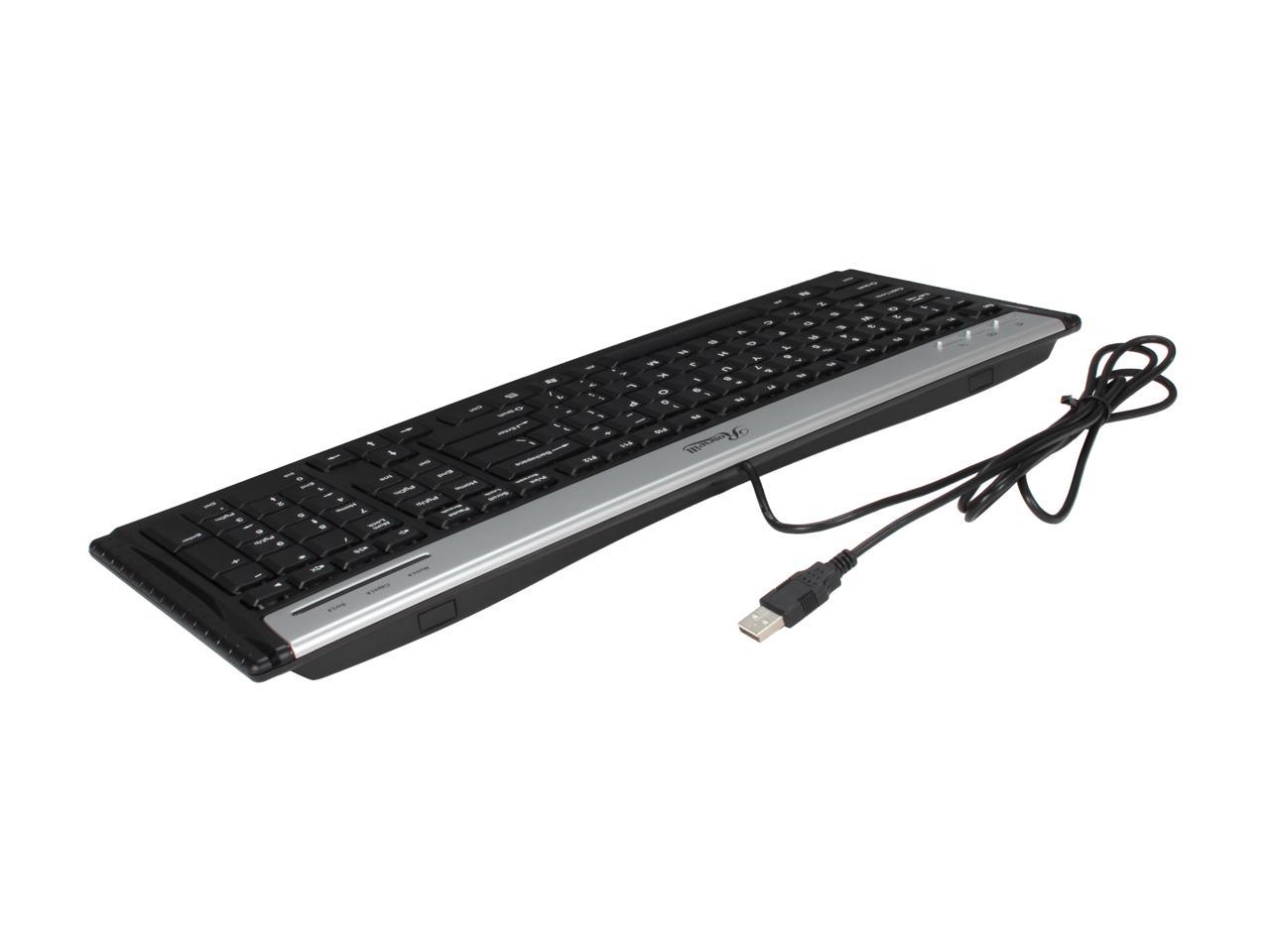 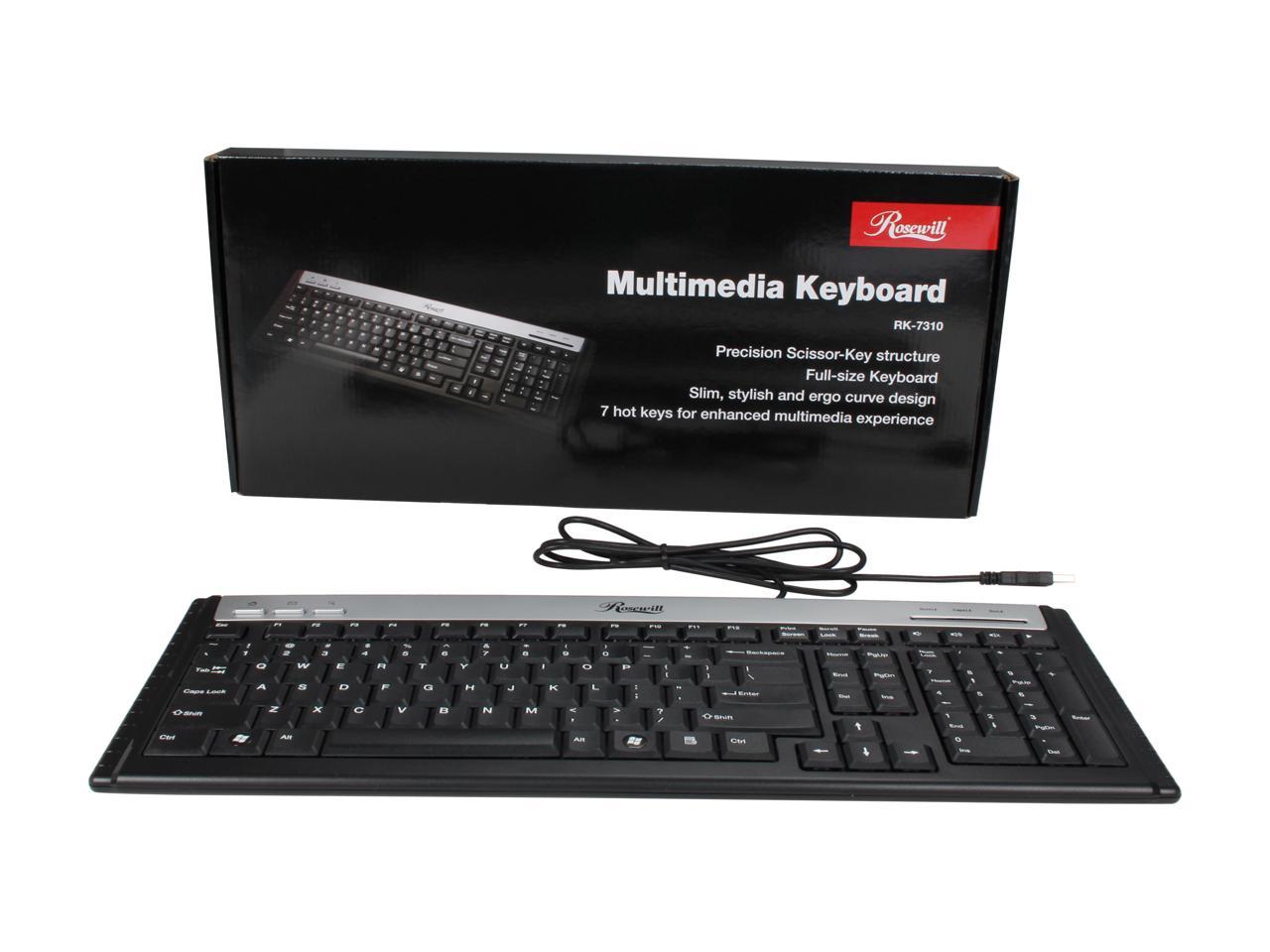 (173) Write a Review
OUT OF STOCK.
Specs
Reviews

Learn more about the Rosewill RK-7310

Pros: Came really packed in the package, thanks to NewEgg. Really nice flat design that looks and feels like a laptop keyboard. Nice click to all the buttons and feels firm in hands. Not really a cheap product for how much it costs.

Cons: Some say since the backslash and forward slash are in an odd place on the keyboard. It only takes about two minutes really get used to it.

Pros: -Very thin -Quieter than normal keyboards -Sturdy and firm feeling -Cheap but doesn't feel cheap -Fast keystroke action -Smaller footprint than my old MS Digital Media Pro -Laptop style, but feels firmer and has the full number pad which is a must -Style of the Lock lights is nice and the brightness isn't overwhelming

Cons: -Large style Enter key, placement of \ key (and the fact there are 2 inexplicably), and orientation of the Home/End/Del block of keys is odd and takes getting used to -"Media" keyboard equates to volume control and a play button -Can't reassign shortcut buttons to other things (like the email button opening my gmail) but I imagine you can find software on the intertubes for that

Overall Review: I got this because my keyboard (the MSDMP noted above) was too loud, the action was too slow, and a cat peed on it, as well as the fact I had gotten used to a Macbook keyboard while my PC was out of order. I didn't want to spend so much on the new Apple USB keyboards that are similar to the Macbook ones, and this was almost exactly what I wanted. Works great for the price, and it doesn't feel like a keyboard I'll be breaking any time soon, and if I do I probably won't be too turned off from buying it again if I needed. Took some getting used to with the letter spacing differed from the Macbook and the other keyboard but now it feels as natural as ever. Playing UT2004 just now I feel as though the quick action on the keys helps reaction time in FPS games (and others I'm sure) a great deal. Only thing I'd change is adding a lightweight software to customize the few shortcut keys but being so few in number it would be pointless.

Pros: I'm a gamer and I decided to get this keyboard even though it doesn't look like a gamer's keyboard, but it works just fine. I'm in love with slim type keyboards. Easy to type and nice and quiet.

Overall Review: They're so cheap that I might as well get another for one when the keys wear out. hehe

Pros: slim, not bulky at all

Cons: i was expecting the buttons to be similar to my laptop's. but this keyboard has spongy buttons. its buttons are not very responsive. normally, buttons don't matter much but it's everything when it comes to keyboards. not recommended.

Pros: Works for what you pay for.

Cons: Awkward placement of \ key next to left alt. Kind of an annoyance for anyone who games alot.

Pros: This board has been through it all, yet still holds together and performs as well as it did out of the box. I've dropped this thing on the ground no less than 20 times, spilled cheapo ramen on it, played some seriously key-intensive games, you name it, I probably inflicted the damage. The total damage overall has been: my secondary backslash next to the spacebar popped out, as did my F8 key, both of them due to particularly nasty falls. And then I popped them right back in, and they work fine, as if nothing ever happened. And I happen to like the clicky noises, because when I'm typing quickly, it sounds very professional to me. Not having to expend any effort to press a key also goes a long way toward never having a key stick after a year and a half of strong abuse.

Cons: It is $15? Even if it had been a bad keyboard, I wouldn't have wasted my money.

Overall Review: As the title of this review says, this was the best $15 I've ever spent. Rosewill has my trust for making bricks that work. If I was a more violent person, and got angry enough to throw this thing against the wall, I doubt it would be broken. It's taken falls that hard. So huge kudos to Rosewill for making a solid product.

Pros: Laptop feel to the keyboard which results in quiet keys. The media buttons are a nice addition for quick volume and pause/play controls. When doing quick computing, I like the number pad (I use a laptop).

Cons: I wish there were more media controls, such as song skip. Also, if you could configure the 3 function keys on the top left, that would rock. Otherwise, its pretty much good.

Overall Review: I've been using a laptop for about 4 years now, and have gotten used to the feel of scissor key style keyboards. Whenever I LAN though, I use a friends desktop for the gaming capabilities, and decided that the typical desktop keyboard wasn't what I wanted. I searched, and found this keyboard and figured I'd try it out, and glad I am that I did. I love this keyboard!

Pros: Inexpensive and light-weight, with the low-profile keys of a laptop. Despite this, the keys have a good action to them. Looks nice, despite the low price.

Cons: A "play" key (not a button) and volume controls do not make a multimedia keyboard. Luckily WinAmp has Global Hotkeys, but if you use Windows Media Player or the like then you're going to be disappointed.

Overall Review: The layout is a bit weird, but not hard to get used to.