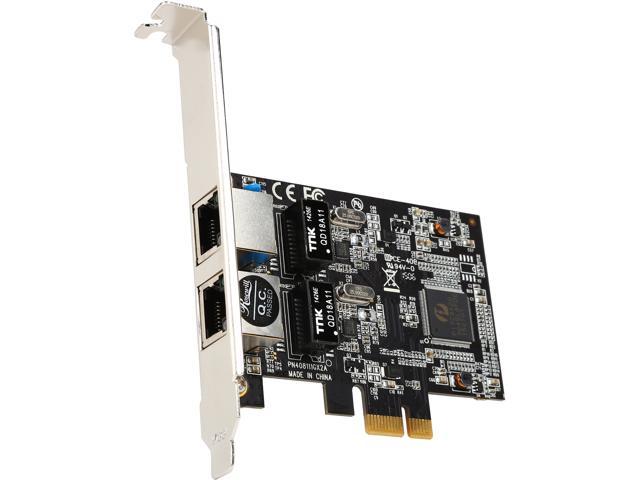 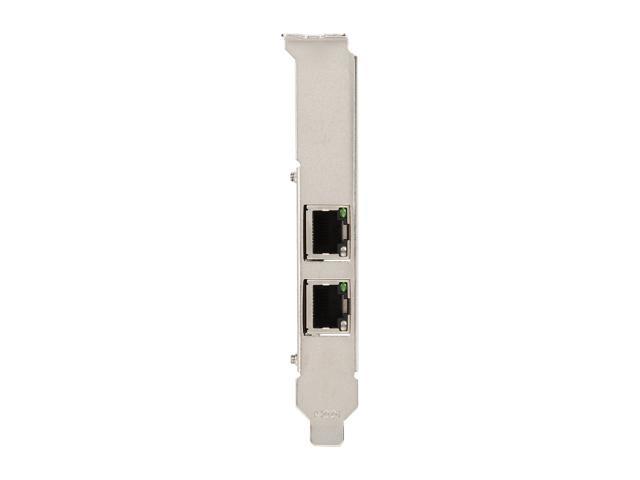 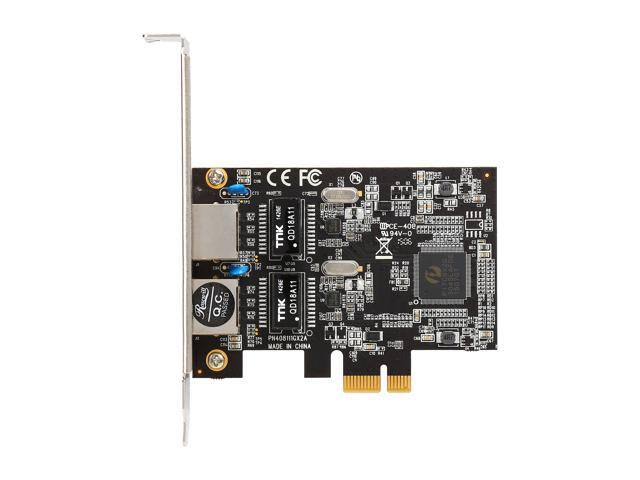 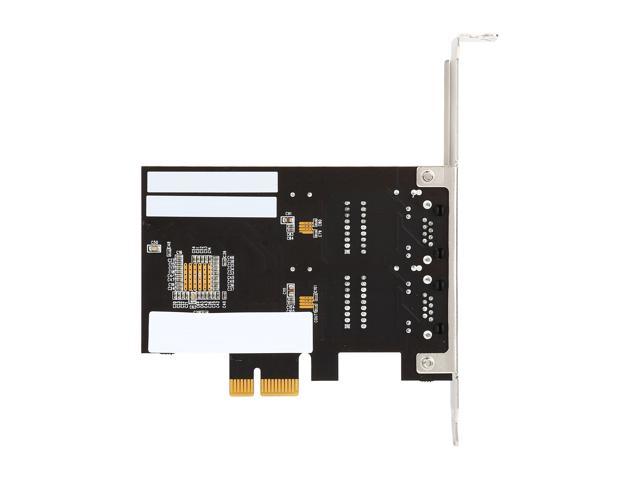 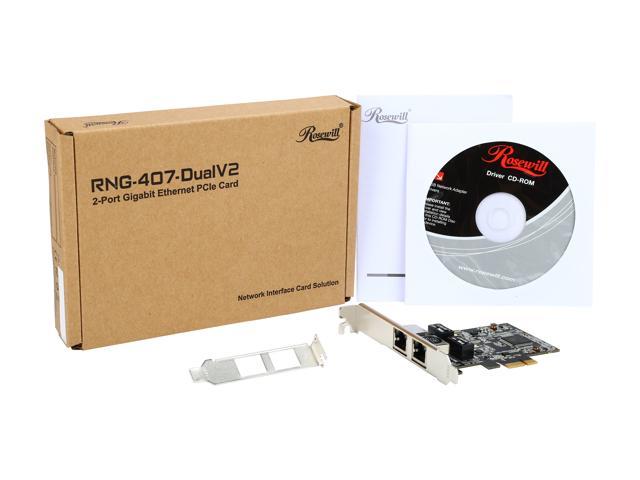 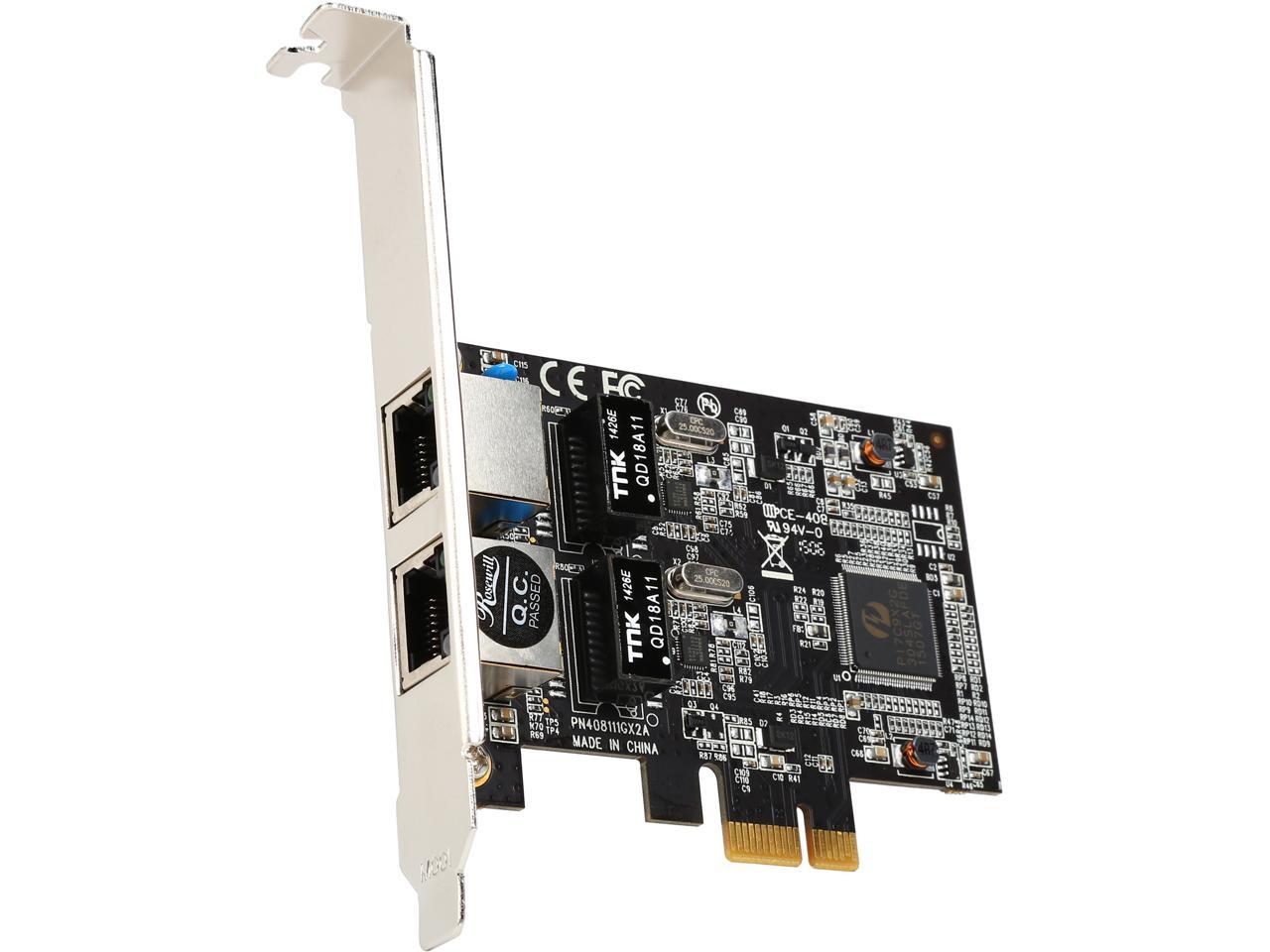 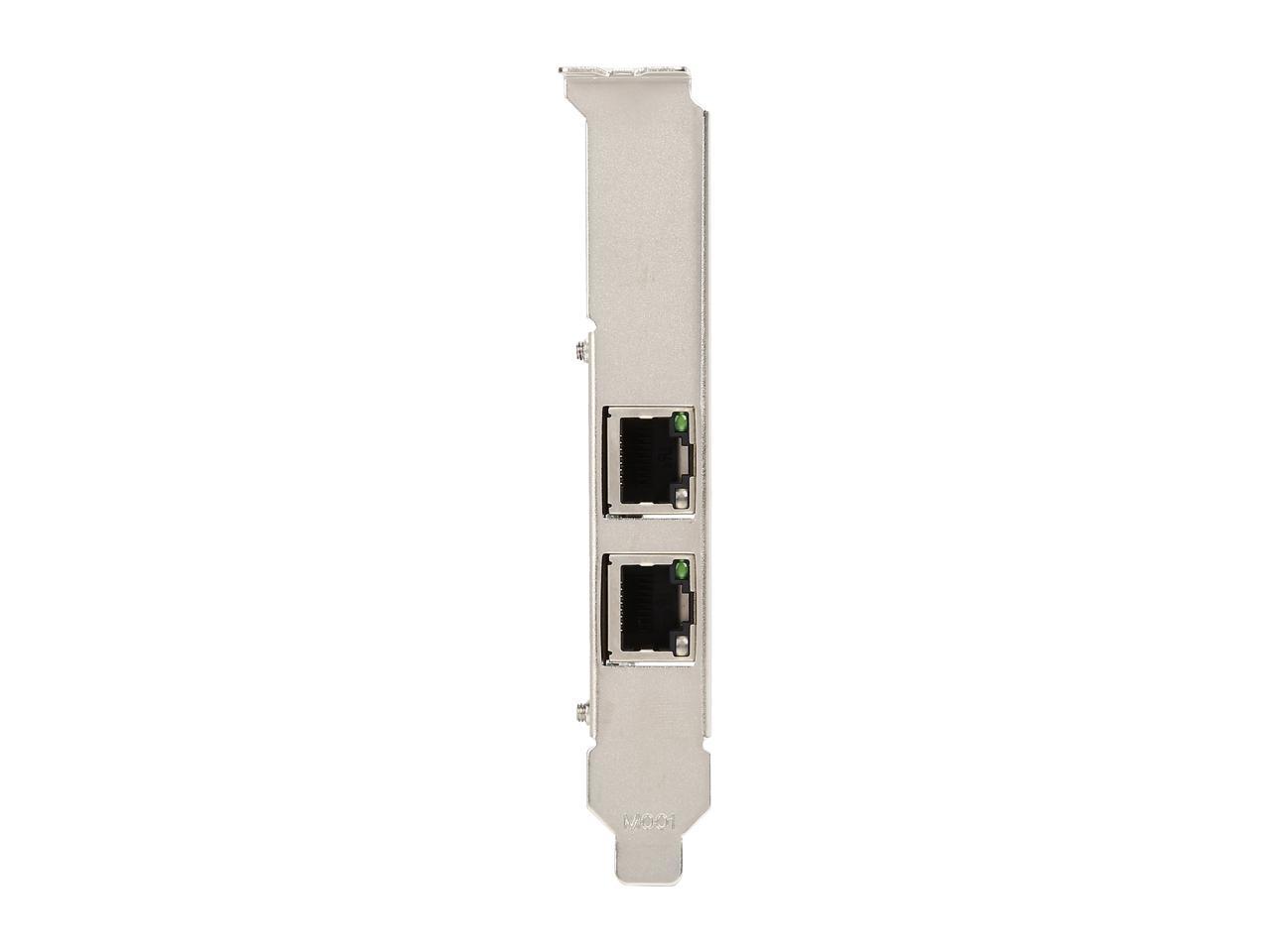 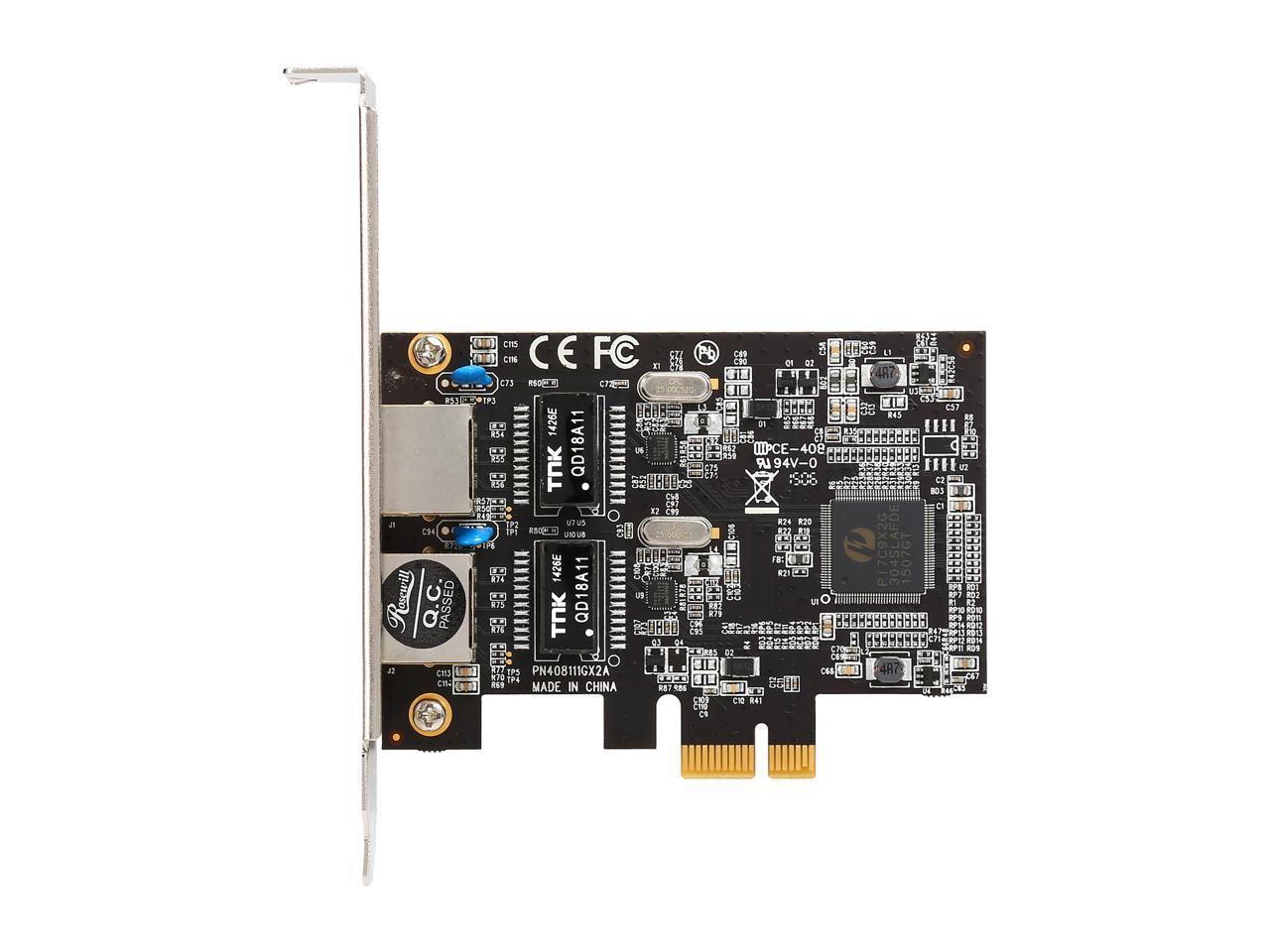 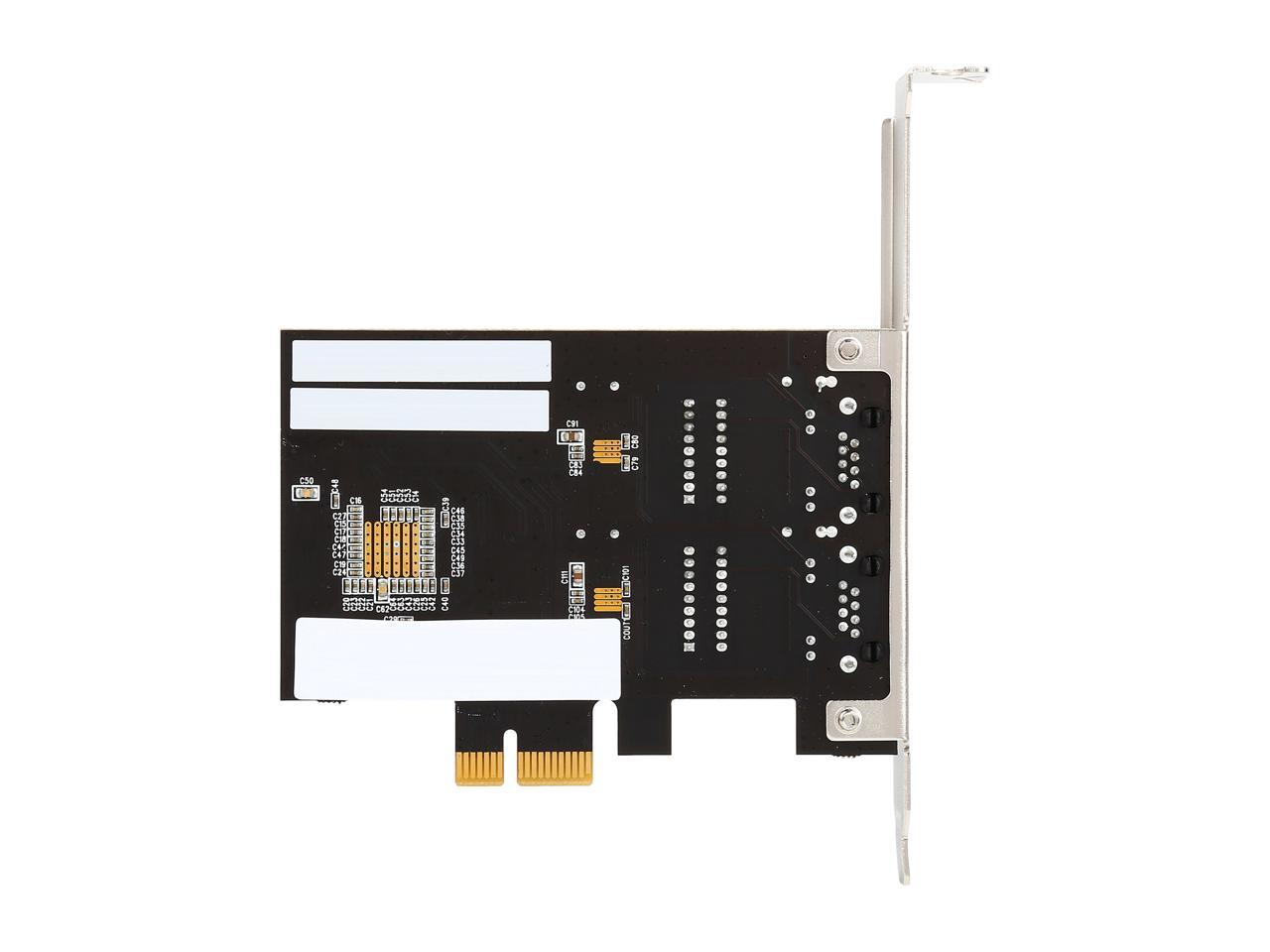 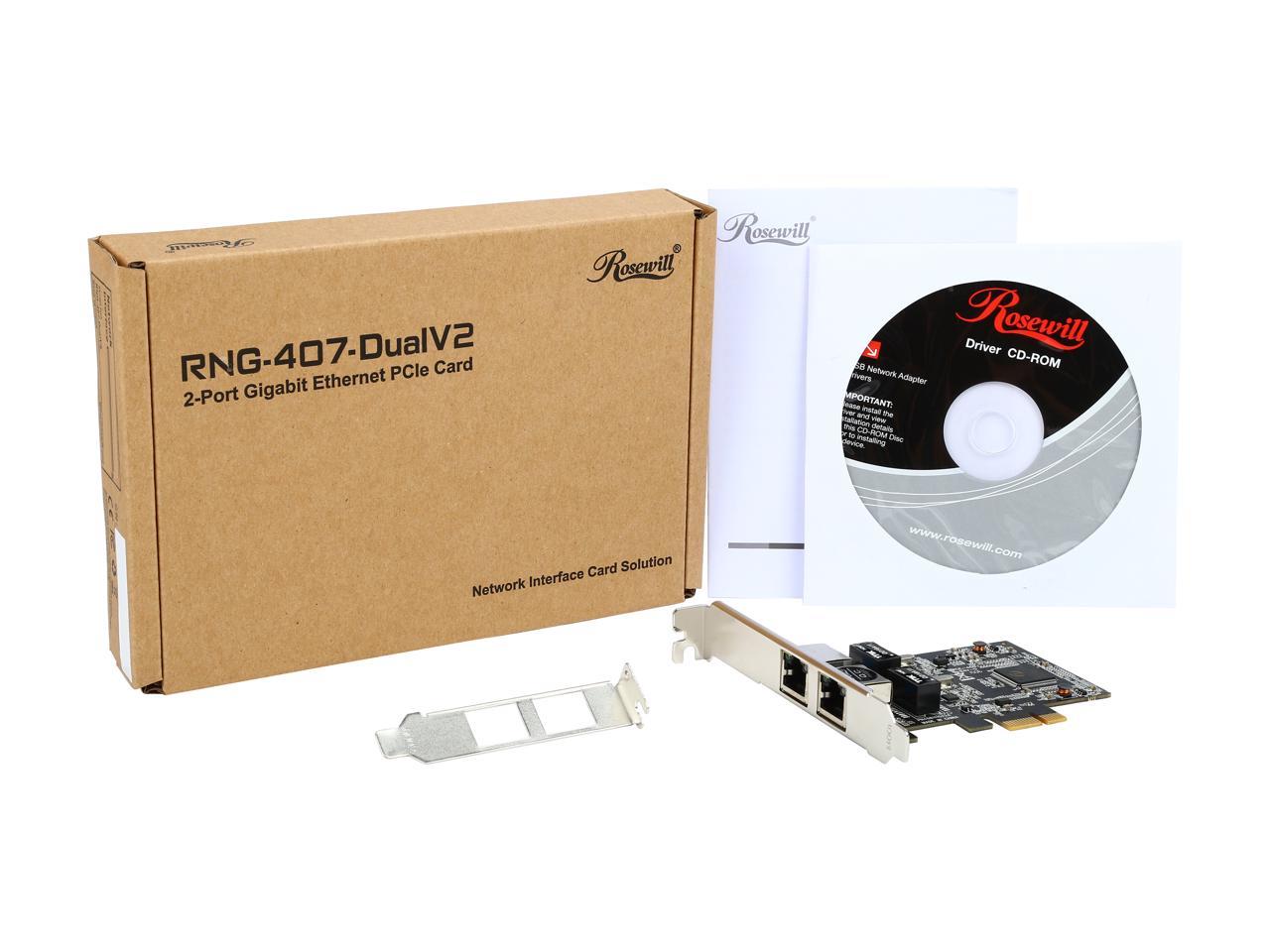 With 10/100/1000 Mbps ports, the Rosewill RNG-407-DualV2 greatly expands your network capacity, enabling instant, large file transfers. At home, the office, or on your business trip, you can work at Gigabit Ethernet speeds and instantly share your files online. Each port provides 10/100/1000 Mbps Ethernet and is fully compatible with IEEE 802.3/u/ab standards.Suitable for any standard PCI Express-enabled system, the 2-port Ethernet card supports full-duplex flow control for maximum data transfer speeds of up to 2,000 Mbps. Install the software with the
included driver CD. Install your Rosewill RNG-407-DualV2 into the desktop What’s in the Box

Learn more about the Rosewill RNG-407-Dualv2

Pros: - Fast throughput - Extra port as backup* - Comes with low-profile bracket for smaller cases - The card is a PCIe x1, so it will also fit into x4, x8, and x16 slot. (It will not fit into a PCI slot.) If you’re video card is in a PCIe x16 card and you’re motherboard has a second x16 slot, it’s possible to use that second slot, but be careful. Some motherboards will drop the x16 to x8 when both slots are in use.

Overall Review: An average user, whether at home or work, would not need dual ports. At most, having a second port would provide a backup if one was damaged and rest of the card was still good. Dual ports come in handy when you need a computer to be on two separate networks at the same time or you need to configure “teaming”. Teaming can be beneficial for heavy load servers by configuring the two ports to work together for load balancing, fail over, or link aggregation. Link aggregation combines the two ports into a one, double-bandwidth, virtual network connection. Unfortunately, this would only be an improvement on heavily used networks with managed switches which, as mentioned, is not the average home or work LAN. If you run a virtual machine environment on your computer, then it is possible to use one of the ports as a dedicated network connection for that VM. I do recommend the card if the price is right. This is a sturdy and good performing card, but don’t buy it because it has two ports thinking it will give you an edge at LAN parties. (Geek dictionary: a LAN party is a collection of gamers that physically meet in one location to establish a temporary local area network for a night of multiplayer gaming.) Testing Details: I used a tool to measure the upload and download speeds for 1, 5, 10, and 50MB files that were written to and read from my NAS. Each file size test was performed 30 times. I ran the test with my existing motherboard’s built-in 1GB Ethernet card for a baseline of the characteristics of my LAN and NAS. I then disabled the built-in and installed the dual port card in an available x1 slot. Windows 7 recognized the new card and installed the drivers. I looked at the Windows Task Manager’s Networking tab and it showed two local area connections. I left one of the ports unplugged and performed the test. The test outperformed my built-in card just slightly, but not enough to be significant. I plugged in the second port and the test results were the same as the first. Windows will only use one port at a time. Windows will failover to the other port if the one in use is unplugged. That’s a nice feature, but the odds of it being useful for an average PC is pretty low. I like to use the Windows provided driver for simplicity except for the components that I really want to perform, like video and network cards. I downloaded the latest driver from Rosewill’s site and ran the test again, but the results were the same. To be thorough, I used Realtek’s unofficial/unsupported teaming tool to test link aggregation. I verified that Windows Task Manager’s Networking tab showed only 1 network interface with 2Gbps link speed. There was no performance gains. I was wishful too but, alas, I’ve already reach the max potential of my LAN. Out of curiosity, I installed the card into my second x16 slot to see if it affected my video card. I used a GPU analysis tool to verify that my particular motherboard did not reduce the lanes to my video card

Pros: This is a dual port gigabit network card for the budget conscious buyer. It is inexpensive, functions as advertised, and is easy to setup. Sometimes you never quite know what you're getting until you try it out and are pleasantly surprised. Truthfully, I expected to install the card, boot up, and have to install drivers. However, on Windows 8 64-bit, I simply booted up and had network connectivity. The card uses two Realtek PCIe Gigabit Ethernet controllers, which are known for being inexpensive but reliable. The PCB was colored black, which is a nice versus green. The soldering and components appear to be satisfactory and appropriate with no sloppiness or defects identified. The NIC came with a user manual and a drivers CD but neither were needed as this was truly a matter of installing in a PCIe port and booting up. An additional low-profile bracket is include for the extremely tight PC case layout. See other thoughts below for testing results.

Overall Review: Testing Results: My first test is very basic. It's simply to see if the card can achieve the same internet throughput as my on-board high-end network adapter. As expected, ping was 17ms and downstream/upstream testing was 58.43/39.44 Mbps, as expected. These results were right in line with my high-end network adapter and above my guaranteed service tier for my ISP. Next, I attempted a large file transfer from wired devices through my router. The results were similarly as expected for PCIe adapters transferring data from SSDs. Ping was just 3ms and the throughput was 704 Mbps (88 MB/s). This is straight out of the box performance with no advanced tweaking of the configuration -- in other words, the way most folks will use it! In short, this product delivers as advertised performance for the budget conscious buyer.

5 out of 7 people found this review helpful. Did you?
Mike L.
Ownership: 1 week to 1 month

Pros: The box contained the card, 14 page printed manual, cd, and also includes a low profile bracket. The short PCI-express board is black in color. It is also compatible with x4, x8, and x16 slots, but would be overkill. It supports speeds up to 1000 Mbps via autonegotiation and full duplex mode doubles the network connections speed. Also supports 9K bytes jumbo frame support and Wake On Lan (WOL) Power Management. It has a typical LED configuration with green indicating 1000 Mbps and orange 100 Mbps. Installation was simple and the bracket lined up well with the case. The dual port card has dual RJ45 connections, which I connected with equal length cables to my router – but of course the cables could be of different length. Installation was simple in Windows 7 64-bit Ultimate. It was detected immediately and there was no problem with the installation using the supplied CD. The screen was slightly different from the printed manual, but no issue to determine which driver to install. I didn't try any other operating systems, but it is reported to work for most of the recent OS. In testing, the performance was at least as good as my previous configuration, but in transferring large files from my server the bottleneck was slowest elsewhere in the transmission. In the future, a second card on the Linux server and managed switch could increase the overall transfer speeds between the two computers, which could give a better indication for transfer rate increase with the dual ports. Will eventually also try on a system which uses a virtual machine VM Player to run a Windows XP network application needed for Skype phone that currently shares a single network connection. Overall, satisfied with the product.

Cons: Low impact and value for the dollar for many typical users.

2 out of 3 people found this review helpful. Did you?
Gaby B.
Ownership: 1 day to 1 week

Pros: Delivers dual Gigabit NIC ports. Popped the card into my main Windows 8 Pro PC and on start up the card worked. I mean....immediately. Plug n Play on this one all the way. Didn't have to use the provided media to install the drivers or download directly from the Rosewill site. It was working immediately upon getting past the Windows Login screen.

Overall Review: Dual Gigabit for $50 and minimal effort required aside from popping the card in. As fast and responsive as my onboard Killer Network. Motherboard is an MSI Z77A-GD65 Gaming Edition. No issues in latency running multiplayer games such as BF3 and the like. I recommend this card. Comes with a low-riser PCI bracket for a finished fit on SFF PCs.

2 out of 3 people found this review helpful. Did you?
Karen K.
Ownership: 1 month to 1 year

Pros: Very basic and simple. Installed in a server running 64bit Windows 7 Pro and started bridging the connections to virtual machines with only standard installation issues (see cons). Plugged it into an open PCIex4 slot. Plugged in the cables and everything talked to each other the way they are supposed too. With these I now have four gigabit NICS for the server which will allow me to turn my NAS and firewall into virtual machines which will help keep my clutter down and my wife happy.

Cons: I already have a Rosewill Realtek PCI gigabit adapter installed, so Windows 7 started to use the existing drivers instead of looking for new ones. But this was a simple "browse-the-CD-for-correct-drivers" fix.

Overall Review: Everything is working and I am very excited to get all virtual machines up and running.

Cons: No cons so far

Overall Review: I purchased eight of these, and installed them on various Ubuntu 12.04 LTS machines (some full height, some half height expansion slots). All are working well, each port is assigned to a different subnet for lab testing purposes. No drivers were required, just a small edit to /etc/udev/rules.d/70-persistent-net.rules to assign unique adapter names.

Pros: Thing has been performing admirably. I'm using it as a bonded interface for my Xen server at the home lab. rr-balance mode. Hasn't skipped a beat.

Cons: Doesn't have any logic of its own, so it hammers the CPU I/O. Then again, how many cards do, and for that matter, at this price? It's an eight core CPU. It'll live.