OUT OF STOCK
Sold by: Newegg
Shipped by Newegg
Price Alert
Add To Wish ListFound on 29 wish lists 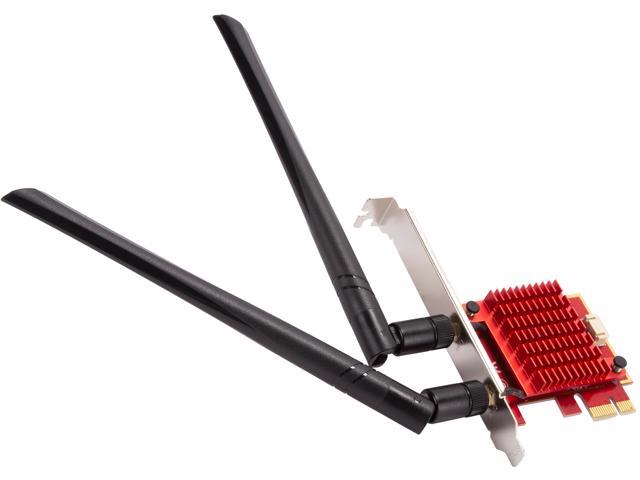 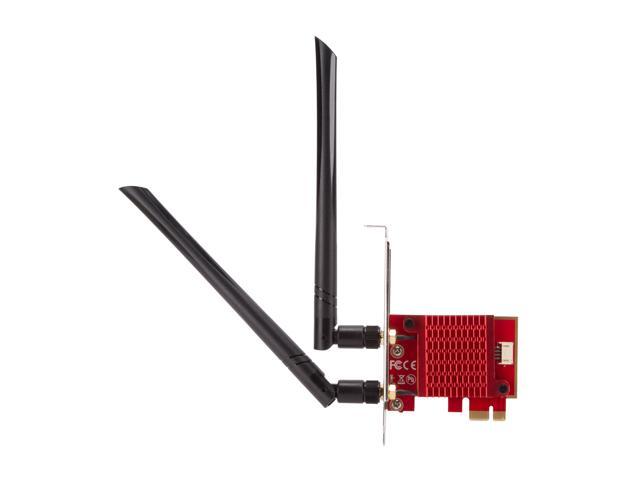 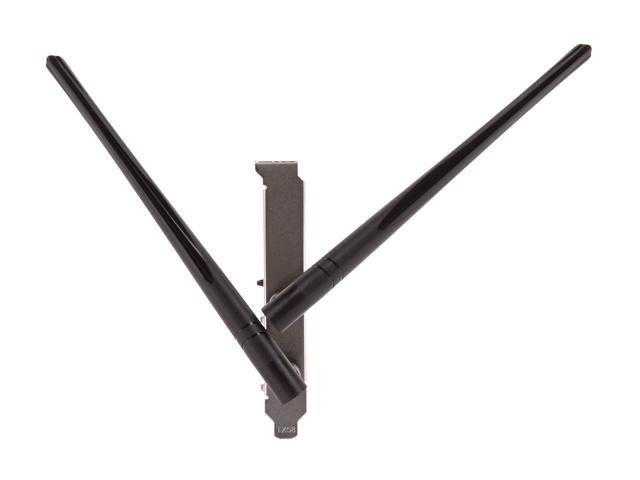 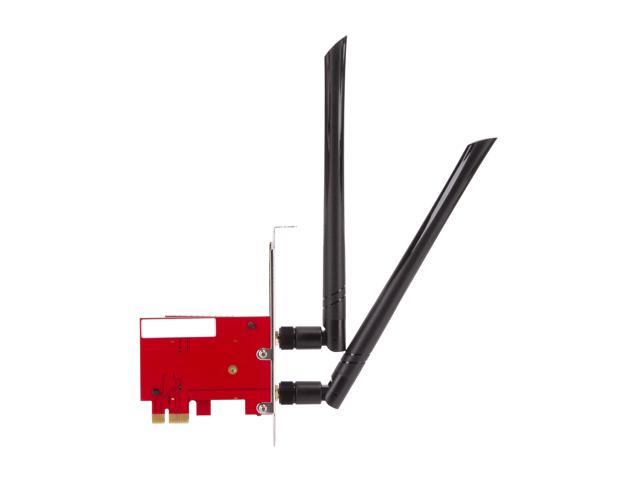 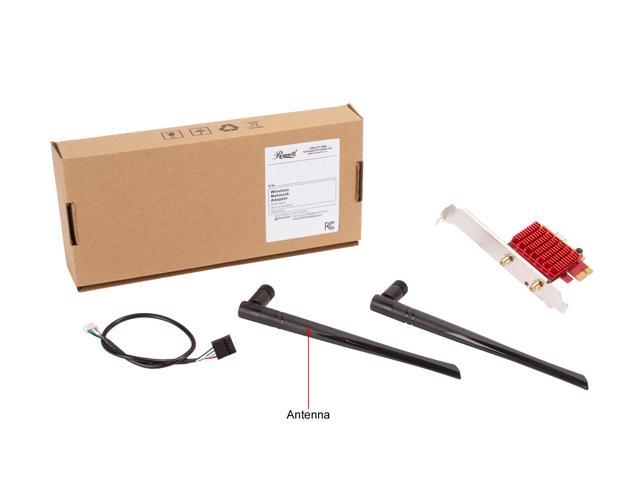 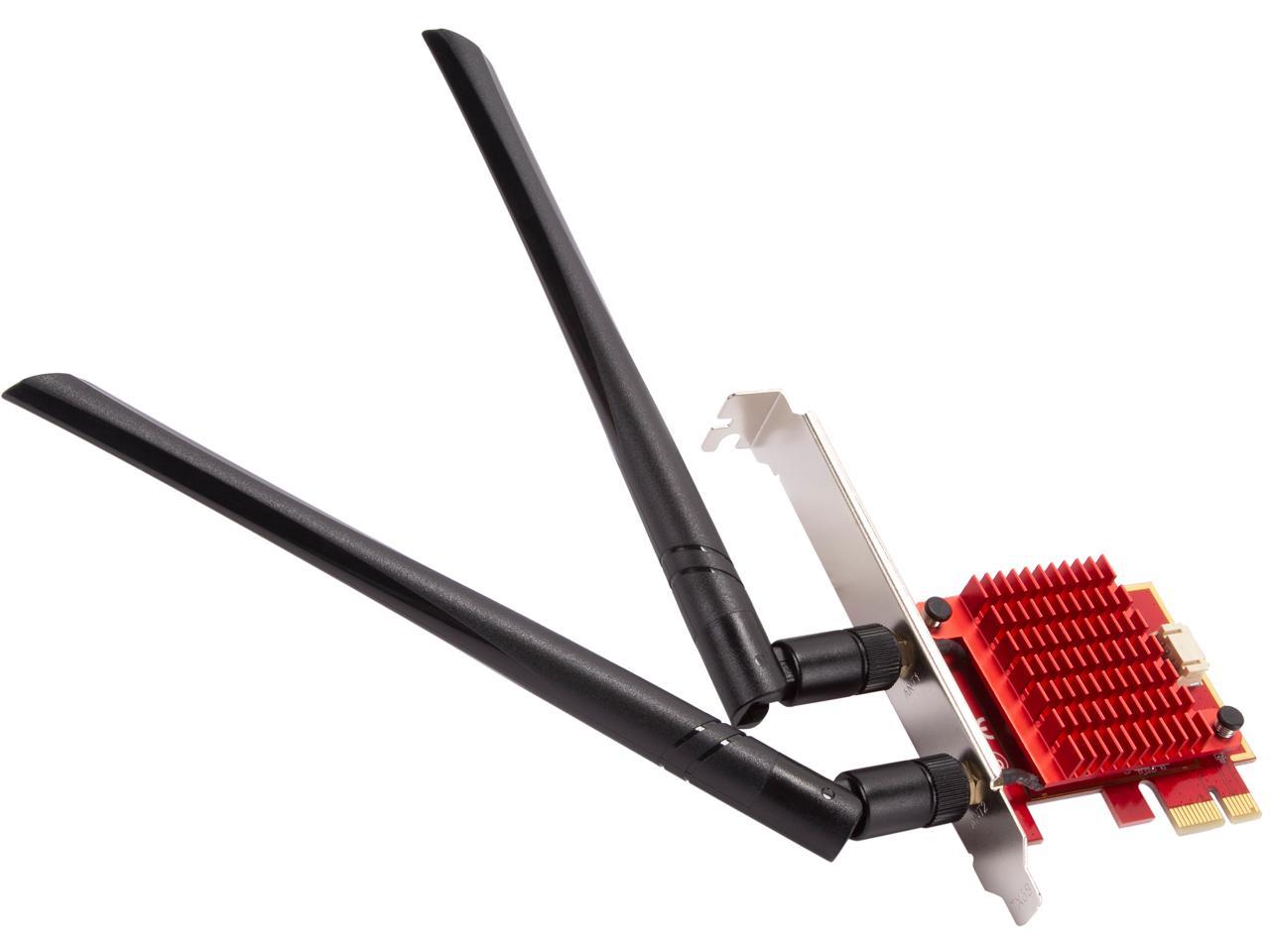 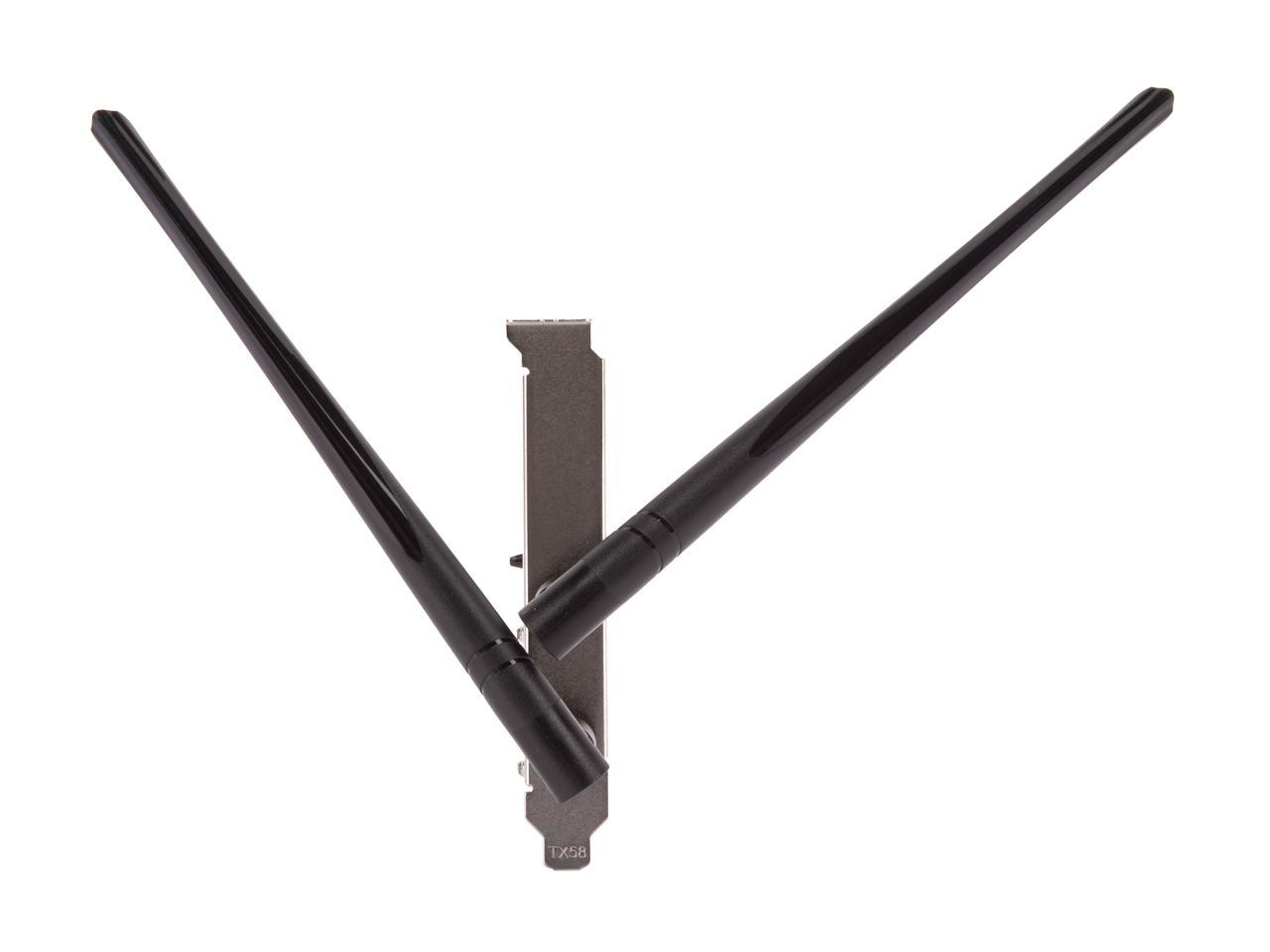 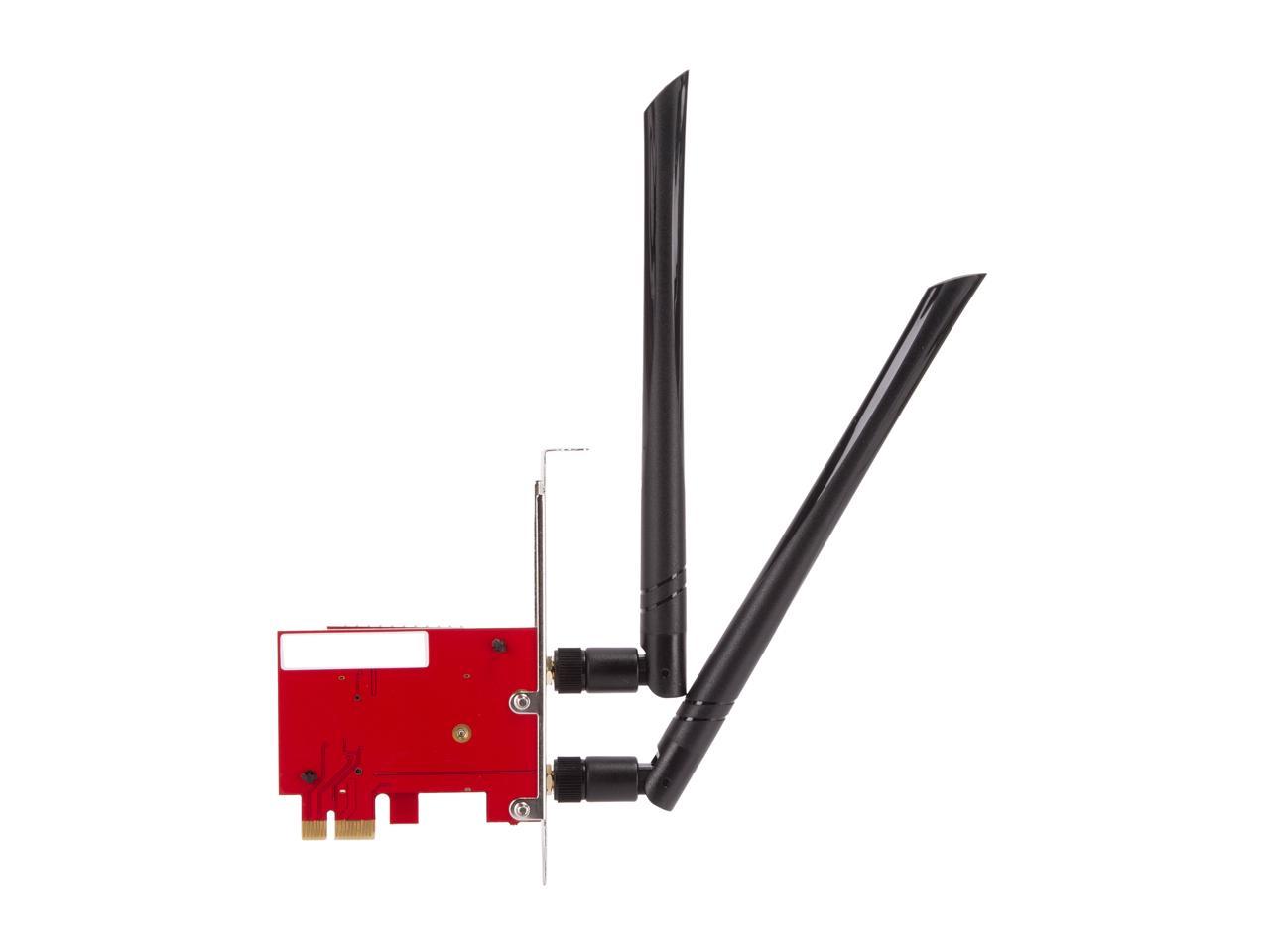 Instantly add Wi-Fi 6 (802.11ax) capability to your desktop. This adapter complies with the latest 802.11ax standards, works over 5 GHz and 2.4 GHz band, and supports wireless speed of up to 2400 Mbps and 574 Mbps respectively on each band. You'll experience smooth browsing, gaming and streaming without buffering. The Bluetooth 5.0 capability offers ultimate convenience in pairing with phones, tablets, and Bluetooth speakers to sync data and stream music.

A beefy heatsink covers almost the entire card to keep your card running stable and reliable. Dual external antennas guarantee strong, stable wireless signal. And with a PCIe x1 host interface, this add-on card is able to work with most modern PCs with an available PCIe slot.

Learn more about the Rosewill RNX-AC3000PRO

Pros: Worked on fully updated Win10 and Ubuntu 20.04.1 (5.4 kernel). Did not need to install drivers - Win10 and Ubuntu both loaded drivers automatically (and without an internet connection). Antennae seem beefy for this price point.

Overall Review: I received an Intel AX-200 (m.2 card) rev 1a in a PCIe adapter. That's what I was hoping for. They don't state that on any documentation that I could find, so there's always a chance that they'll switch cards down the road. YMMV. Windows ping RTT to router was about 4x Linux RTT. Not sure what that's about. Maybe the disk/web have optimized drivers?

Pros: - Mine shipped with a genuine Intel m.2 2230 Wi-Fi 6 AX200 card under the heatsink - Windows auto-installs Intel AX200 (Gig+) wifi & bluetooth drivers for this card - Bluetooth range is better than my Pixel phone. The card transmits BT audio through 4 internal drywall walls. Can't tell you the absolute BT transmit range b/c it transmits across the full interior length of my 2br/2ba condo. - over 5Gz AC wifi (I don't have an AX router) I'm getting about 320MB (not mbps) sustained file transfers to my server. Now that might sound low but it's identical to my WIRED gigabit transfers. This means on my particular network, I'm being bottlenecked by my server's HDD write speeds and not by this card's wifi throughput.

Cons: - Could be cheaper?

Overall Review: First things first. Unlike most ppl buying this card, I'm not really concerned with its wifi performance. I bought this card SOLELY for its Bluetooth 5.0 radio to stream audio to wireless ear buds and to connect gaming controllers to my PC. My home is cat.5e wired for gigabit which is why I don't care about this card's wifi performance. Also, I don't even have a 50Mbps internet connection, much less Gigabit internet, so there's no point in me upgrading my old AC router to Wi-Fi 6 AX needed to take full advantage of this Rosewill card. Regardless I'm happy with this cards wifi & bluetooth performance in an old-ish router over the 5Gz band. Now I've only had this card for a day but I haven't experienced any connection issues or dropouts. And the Bluetooth 5.0 radio is STRONG. It fires clean across my condo end-to-end. I'm guessing ppl complaining about poor wi-fi range or drops have bad/weak routers to begin with. Again, I don't care about wi-fi performance so I'm didn't do any extensive testing... but so far it looks perfectly fine. Regarding the actual hardware, this Roswell card is essentially a PCI-E 3.0 x1 adapter-board with a genuine Intel m.2 2230 Wi-Fi 6 AX200 card plugged into it. Because it's a genuine Intel AX200 M.2 card, Win10 auto installs drivers on 1st boot directly from Windows Update. Actually, I don't think it downloaded drivers from Win Update. I think the drivers were already preloaded in Windows' driver cache b/c installation was instantaneous. Anyways, the bottom line is this isn't some 3rd party off-brand Chinese chipset requiring you hunt down doggy drivers off the Net. If for some reason your Win10 doesn't auto-install the correct drivers, just go to Intel.com and download the drivers directly of their website. Don't go to Rosewell. Go to Intel and get the latest drivers directly from the source. If for some reason my card craps out, I'll update this review to 1 star. That's all.

Cons: Could be at least a little more explicit in their directions.

Overall Review: 2 things: 1. People claim they have an issue with updating the drivers if they don't have a disc reader. This thing uses Intel drivers so all you need to do if you don't have a disc reader is google "Intel driver support" and install the driver support assistant. Then it will automatically find the latest drivers and you can follow the wizard. 2. People are claiming they do not know what the extra wire included is for. It became apparent after reading the instructions that the network card requires USB 2.0 from the motherboard pins, which is what the wire is for. You should be able to find the location of the pin port in your motherboard manual. After plugging this in Bluetooth worked. It took less than 5 minutes to setup this thing start to finish.

Cons: you do need to connect a wire into the usb 2.0 port had to do alot of adjusting to get a good signal

Overall Review: This was more to do with my motherboard and videocard. the pcie slot was taken up since my videocard is too wide. It was great I could take the heatsink off and put it in a regular pci port. Works like a charm, and speed is very fast for 802.11 ac. I don't have wifi 6 so can't comment on wifi 6 speeds.

Pros: -It gives a connection

Overall Review: -Going to return this.

Pros: - Worked flawlessly with Windows and Linux - Much faster than the old 2.4Ghz card I was still using

Cons: - The bluetooth works but can be a bit unreliable. My Xbox controller seems to randomly disconnect when connected by bluetooth. Other bluetooth uses like streaming music to speakers works fine

Overall Review: I'd give it a perfect rating if not for the Bluetooth issue. Overall, I think this is about as good as it gets without doubling the price of this card.