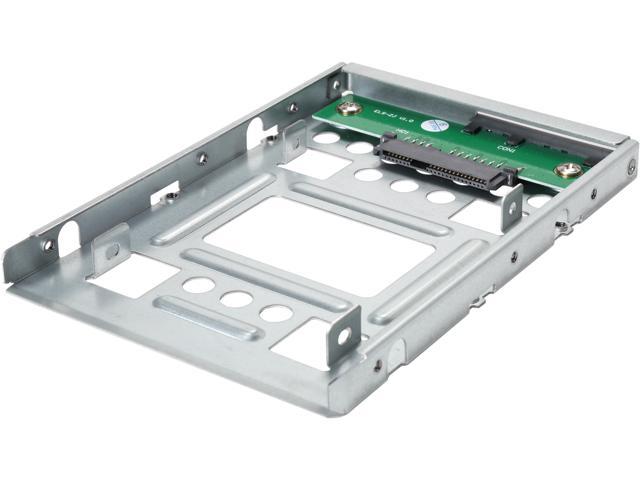 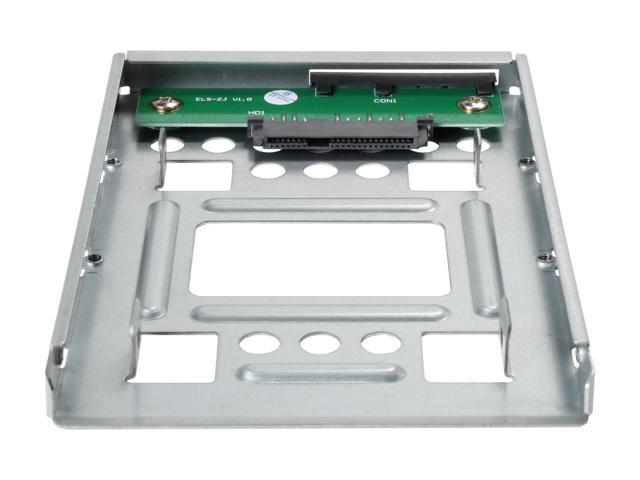 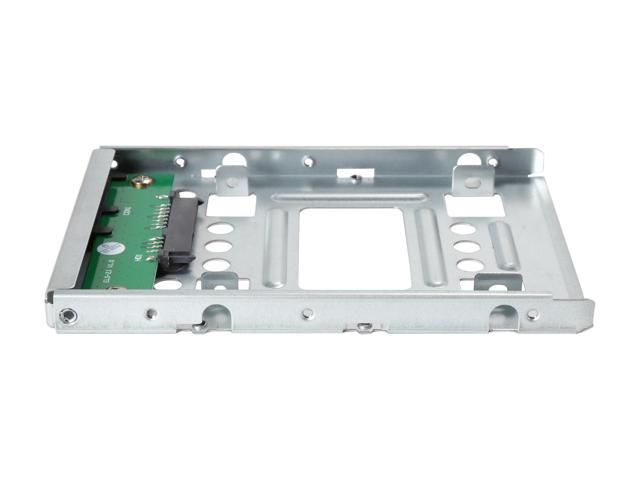 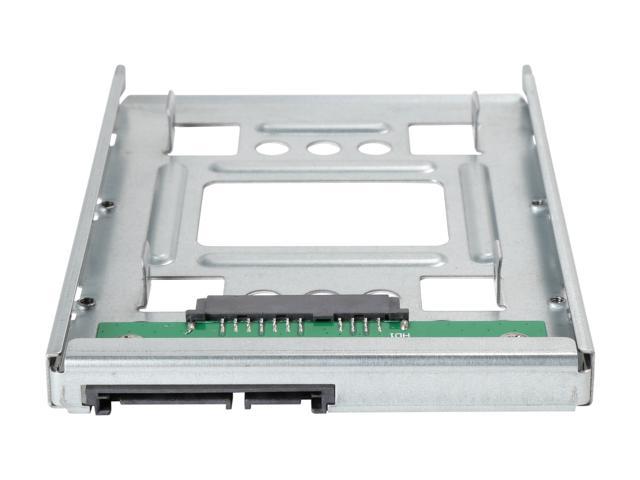 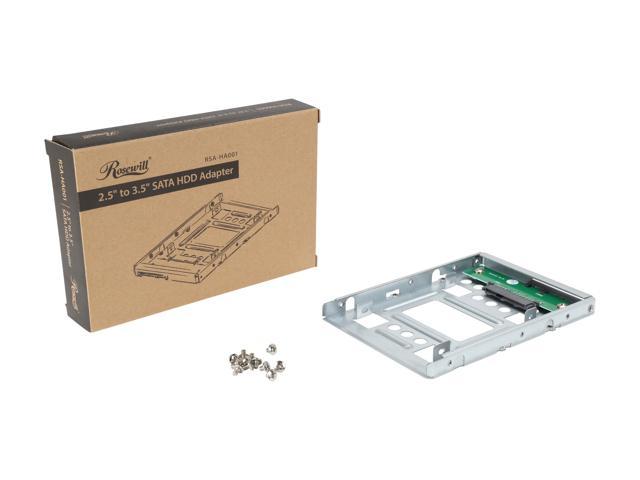 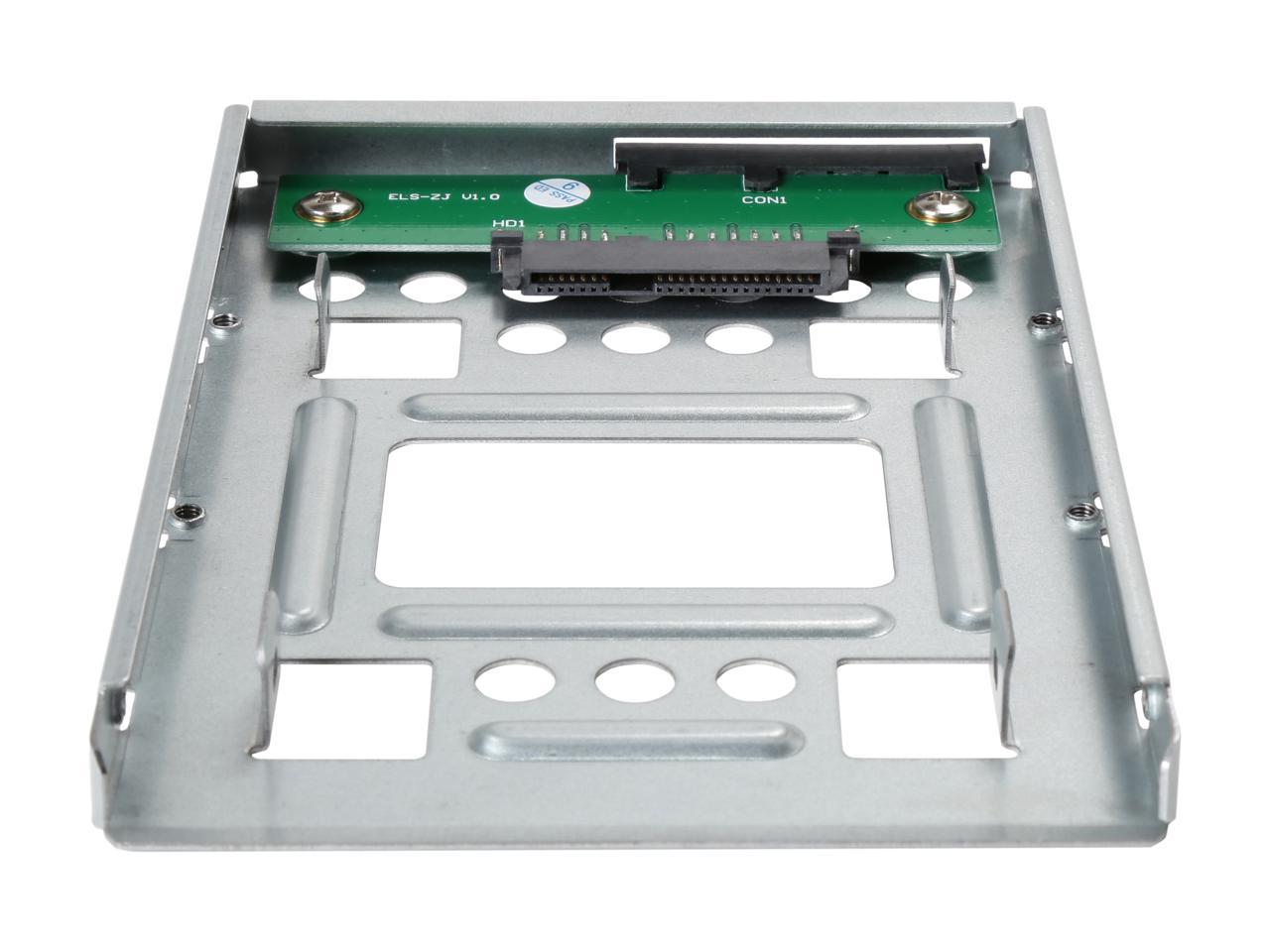 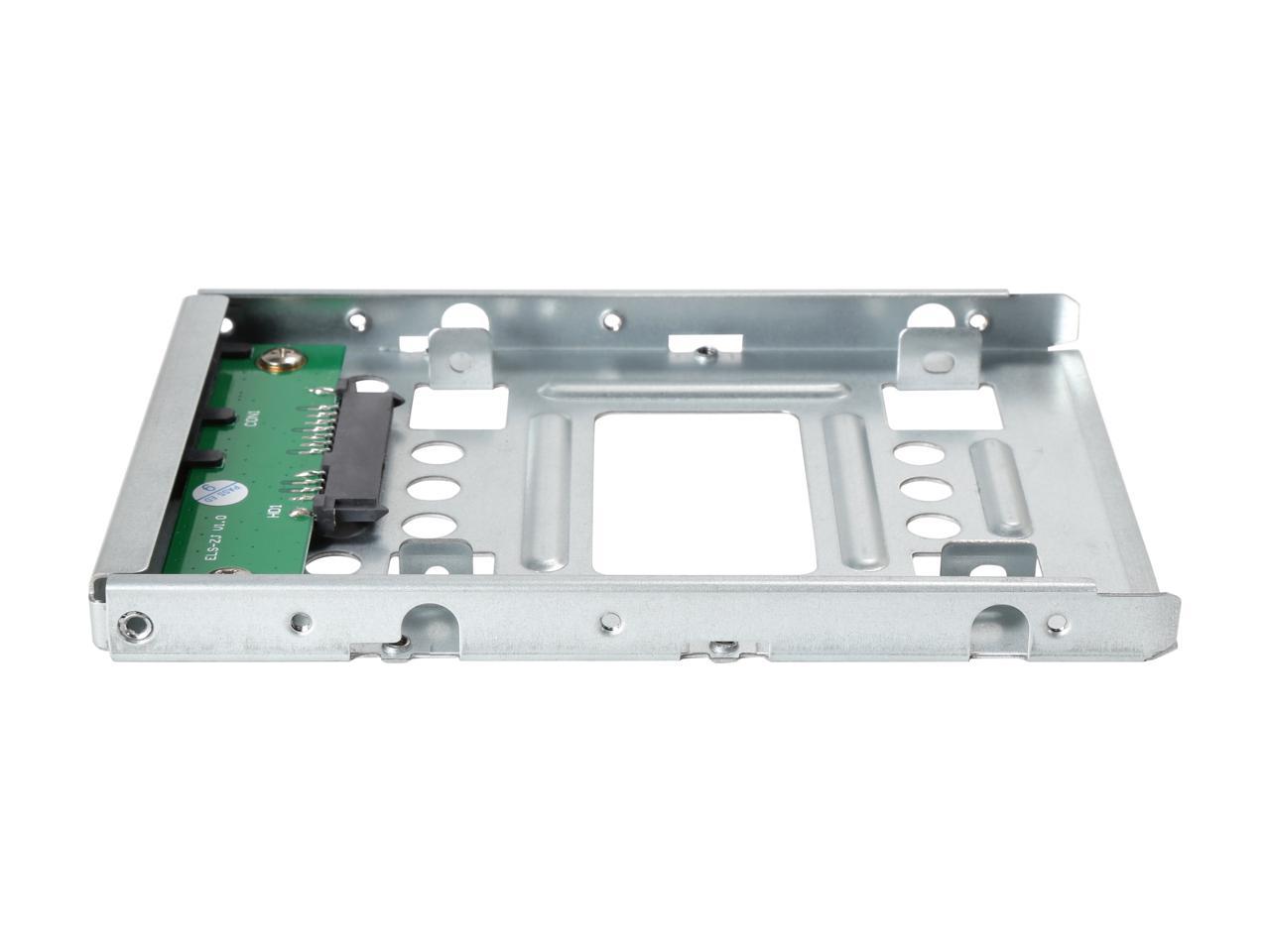 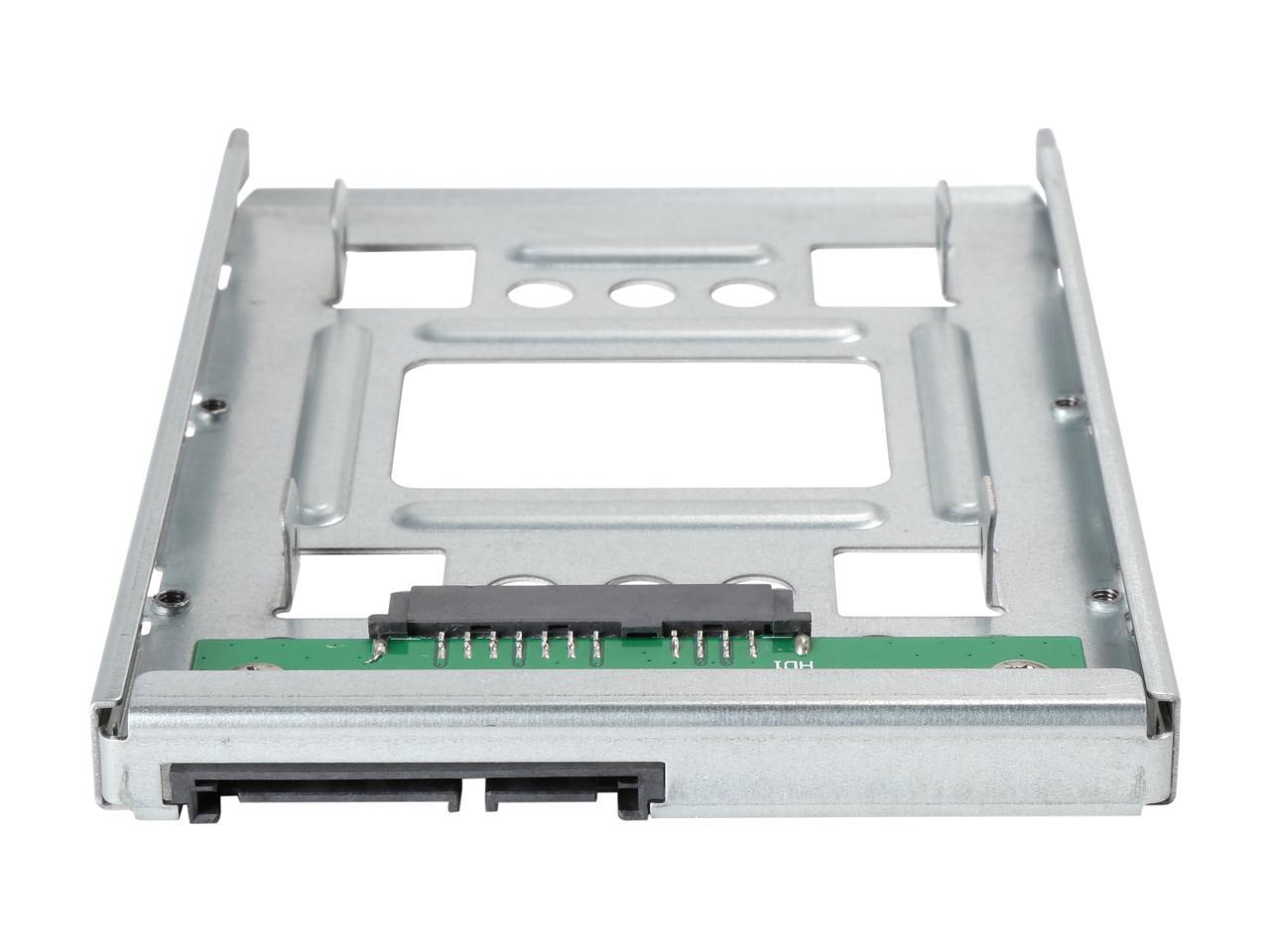 The Rosewill RSA-HA001 2.5” to 3.5” SATA HDD Adapter supports hot-swap technology. Pair it with your hot-swap capable cases, and swap in or out your 2.5” drive directly without turning off the host system.

Heat will be dissipated in an effective way thanks to its well-ventilated construction. No more heat buildup. Your drive will consistently deliver peak performance.

Learn more about the Rosewill RSA-HA001

Pros: The Rosewill 2.5 SSD to 3.5 SATA Hot Swap Bracket, which came included with my Western Digital Blue 1TB SSD was a nice free gift. And it is made of metal, not plastic. It also fits into my new build. I had an extra space specially made to put my SSD into my Be Quiet! case, but I would have wasted an entire SATA cable coming form my power supply just to reach its remote location. So this tray allowed me to use all four SATA connections on the cable instead of just one while placing it among the other HDD's.

Cons: What I did find out was that this tray is a leftover from at least around eight or ten years ago, if not longer. The holes that are drilled into it fit the older cases from that time and earlier, which had the hard drive bays located parallel, instead of perpendicular, to the side covers. The needed screws' threads are different than what comes included with modern case hardware unless, of course, your case is fully tool-less in design. Moreover, I have found that some hardware (screws, etc.) is always still useful or needful even in so-called tool-less designs.

Overall Review: I was able to find some of the old screws in my collection, but that meant that I could not use the screws that fit the rubber side rails which came with the case. So, I was forced to recreate the whole thing by using screws with heads that were too small to fit the rubber rails included with my case. I had to find washers to make up the difference in order to hold the side rails in place and then slide the tray into the drive bay before they fell off or just balked at being inserted. It took a few attempts to be successful. It worked, but just be aware that this tray might present you with a similar challenge. Since I paid nothing for this Hot Swap tray, I can't complain too much. With a little thought, I could still use it and didn't have to throw the thing away. Just know that a lot of very old "refurbished" stock that has been sitting around for years is being unloaded these days if, perhaps, they actually ask you to cough up money for some of it.

Pros: - Feels very strong - The SATA adapter can be removed from the caddy if needed

Cons: - The holes for mounting into the desktop are small. They would clearly work with the provided screws, and if that is how it is being mounted it's fine, but since my desktop has a screw-less mounting point, I had to fight to get the little pegs into the holes.

Overall Review: TL;DR - The fact that the SATA adapter is easily removable is surprising plus as not all 2.5" drives will fit perfectly. Despite the problems with mounting the caddy in, I'm happy. When I got this, I tried putting in the 2.5" drive and noticed that it didn't quite fit. I had read that that drive could have that problem (it is NOT a problem with the caddy - I tested with another 2.5" drive and it fit perfectly) but the caddy actually provided an easy solution. By unscrewing the adapter, I was able to seat in the drive in place and then I put the adapter back in and was able to lock it in place. Then, I GENTLY tightened it back in place and - presto! - the drive fit and functioned. At least, it functioned once I finally got it in the desktop... The desktop has one of those "easy" screw-less mounting things on the inside that flexes with little pegs to mount the drive. Sadly, the screw holes on the side were just slightly too small. It took several minutes of messing to get it to fit, but I did eventually manage it. In the end, the drive worked and the caddy holds it safely in place. It seems quite secure - I have no fear that it is going to come out. Quite the opposite: I'm not looking forward to removing the thing if I ever want to change out the drive. For me, it's definitely not going to be a "hot-swap" situation, as I'll be wrestling with the tower and wouldn't want it running while that happens.

Pros: Just what I needed. I have a Rosewill tower that has 4 hot swap bays for 3.5 drives. I put this adapter in one of the trays and now I can hot swap a SSD when needed. It works great and have had no issues. Before I had to use a docking station that was slower to test drives, virus scan and save customers files before doing a clean install of Windows (I have a computer repair business). My scan, transfers and Disk Function Tests are 30-50% faster now.

Overall Review: 3.5 drives just pop into my hot swap tray and there is no place for screws so I just slip in the SSD adapter in. The adapter has enough support for the SSD and won't be in long enough to bother with screws. I do recommend this product and I will buy again if I need another. I just hope it will be available for a long time.

Pros: Dimension of the adapter is of very high precision.

Cons: Mount holes are all M3 instead of 3.5" Hard drive spec. Make sure you get some countersunk M3 screws in order to mount this! on any "Hot Swap Caddie". Those screws are cheap but hard to find!

Pros: The screw holes line up as expected. Fits in the 3.5 inch slot. What else can I say?