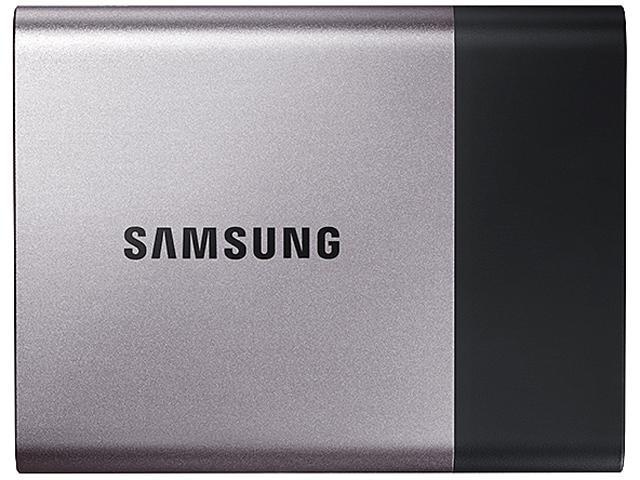 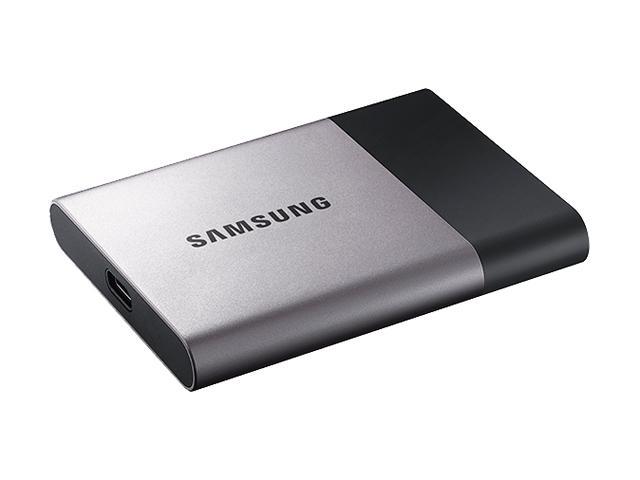 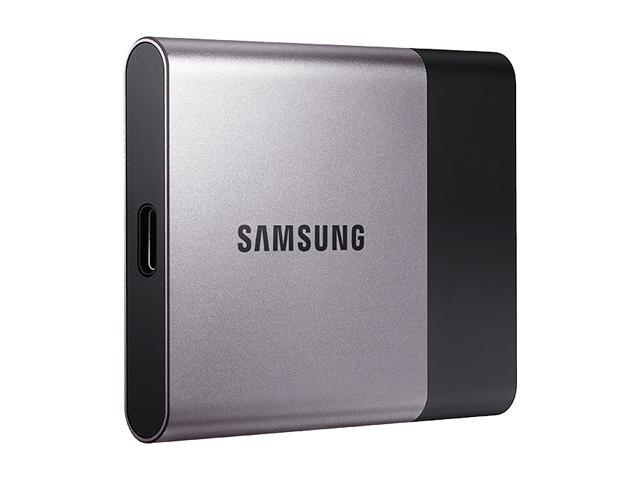 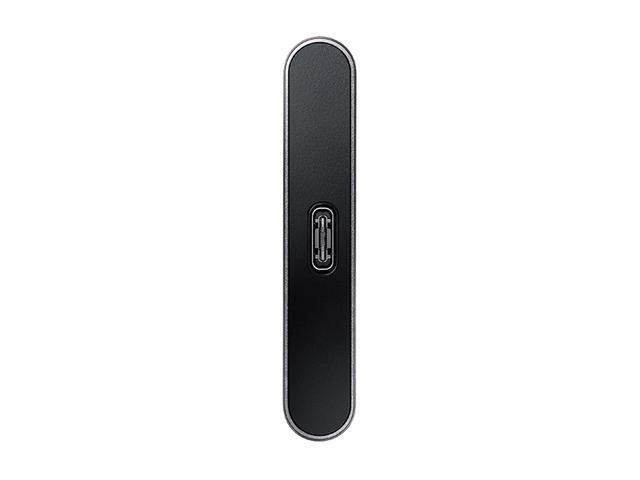 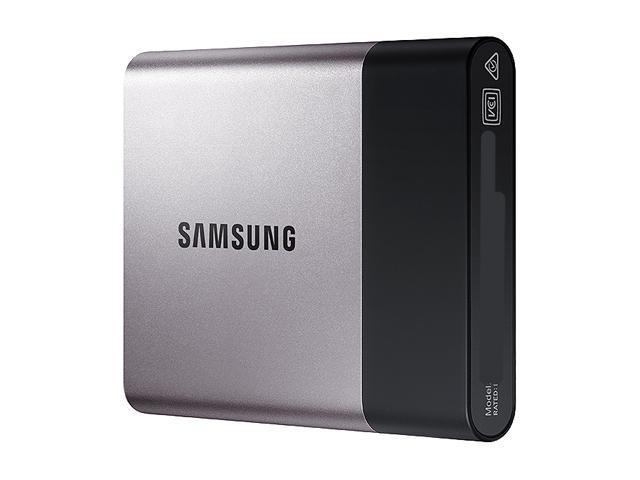 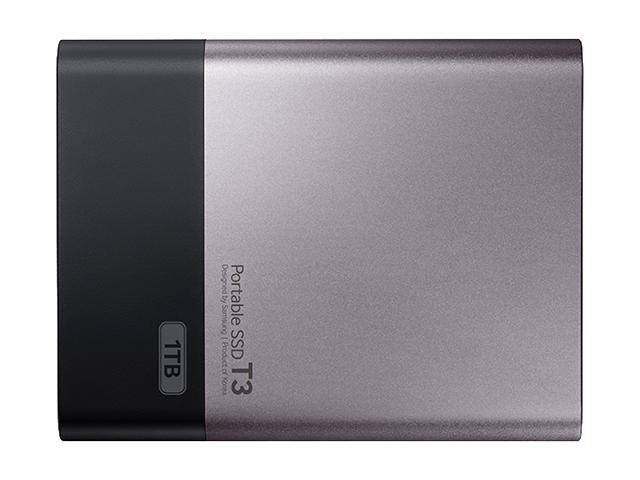 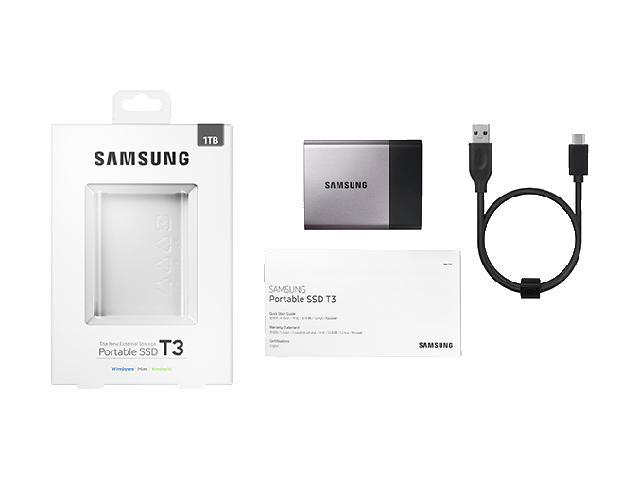 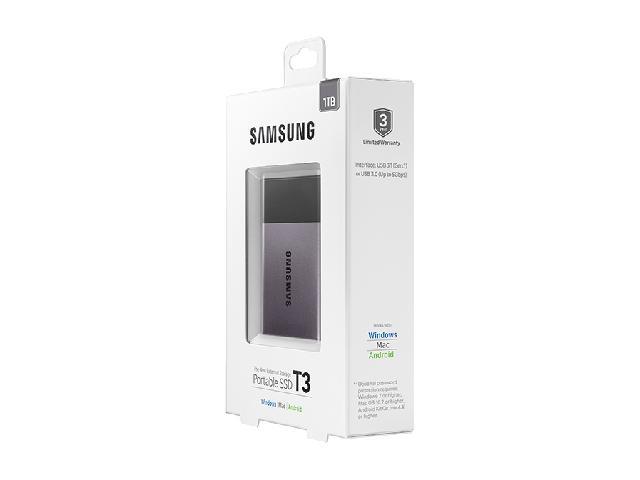 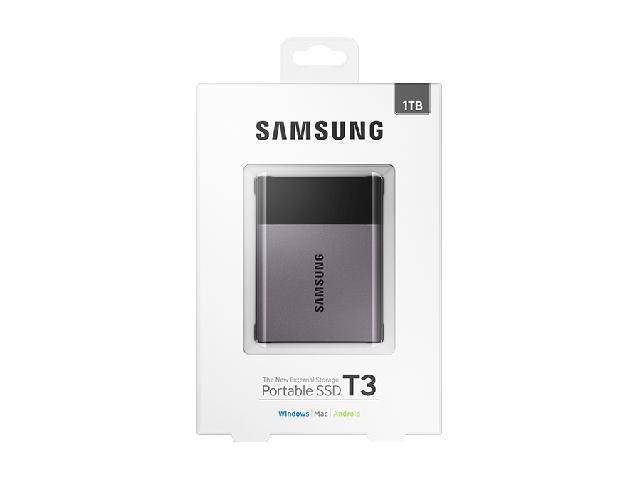 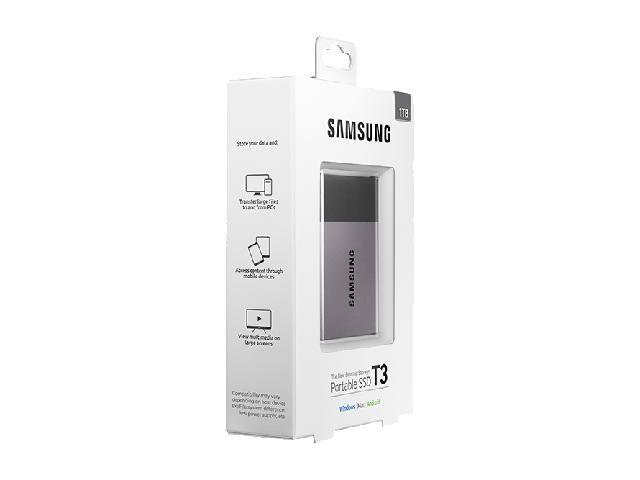 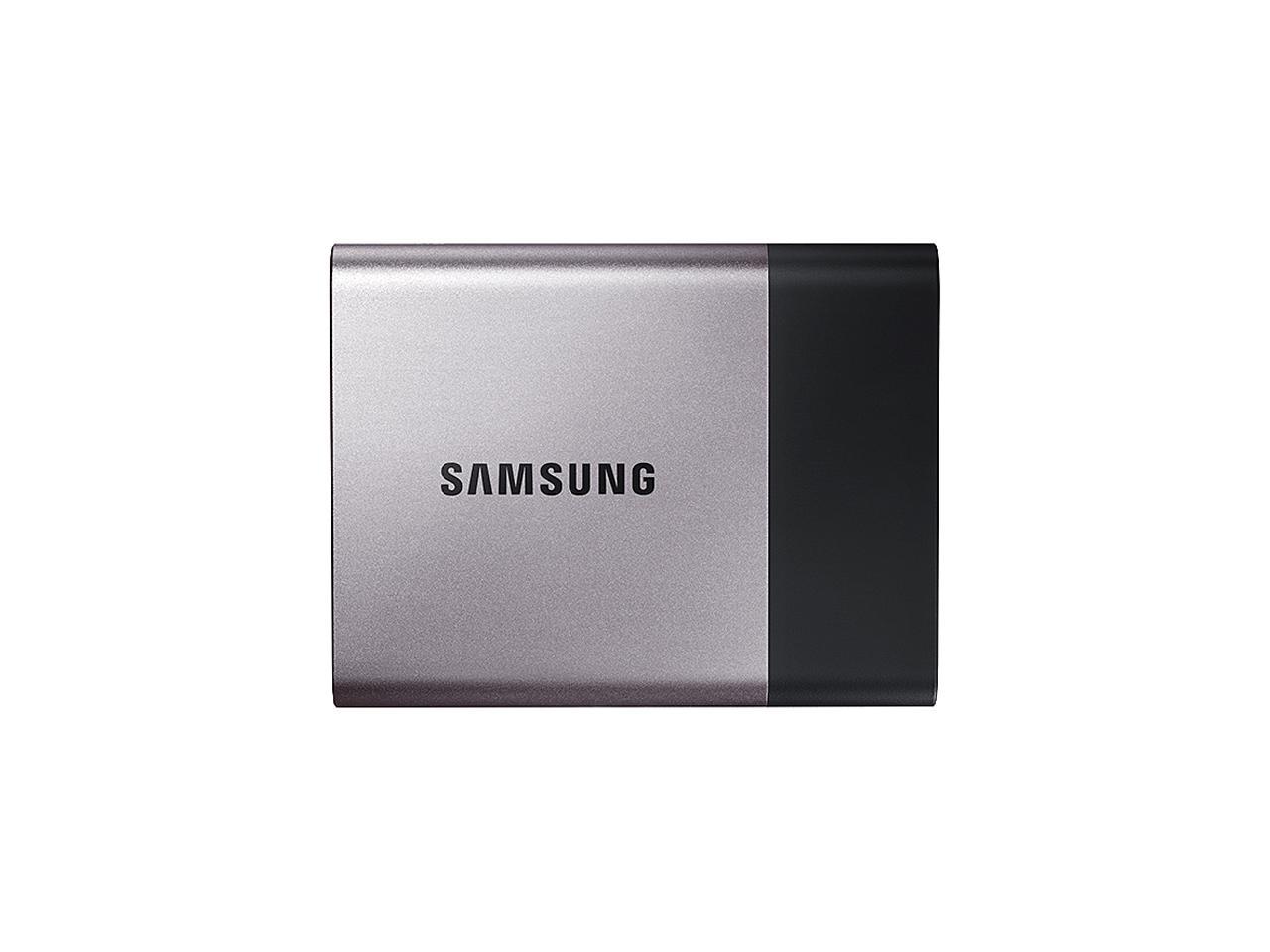 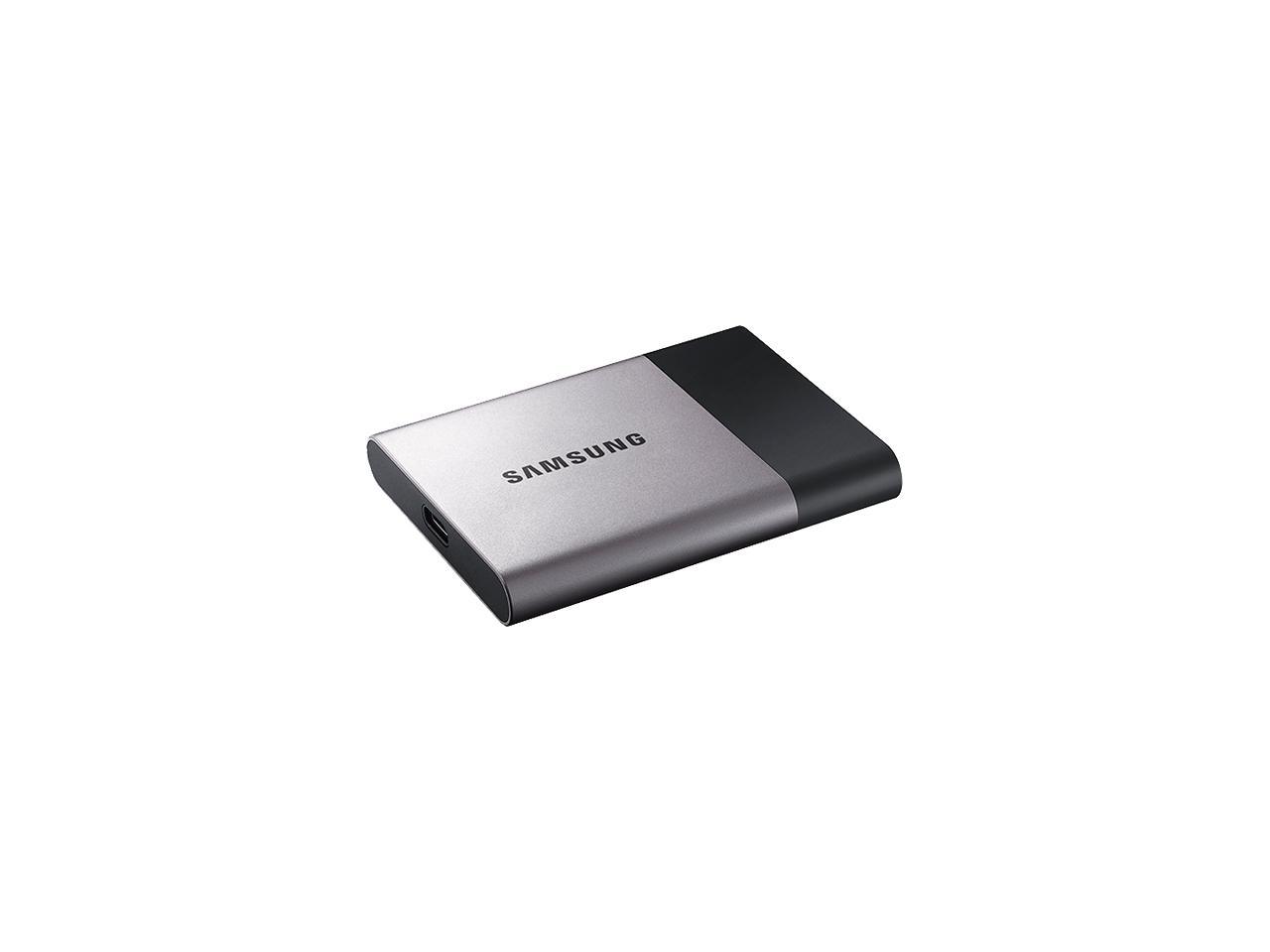 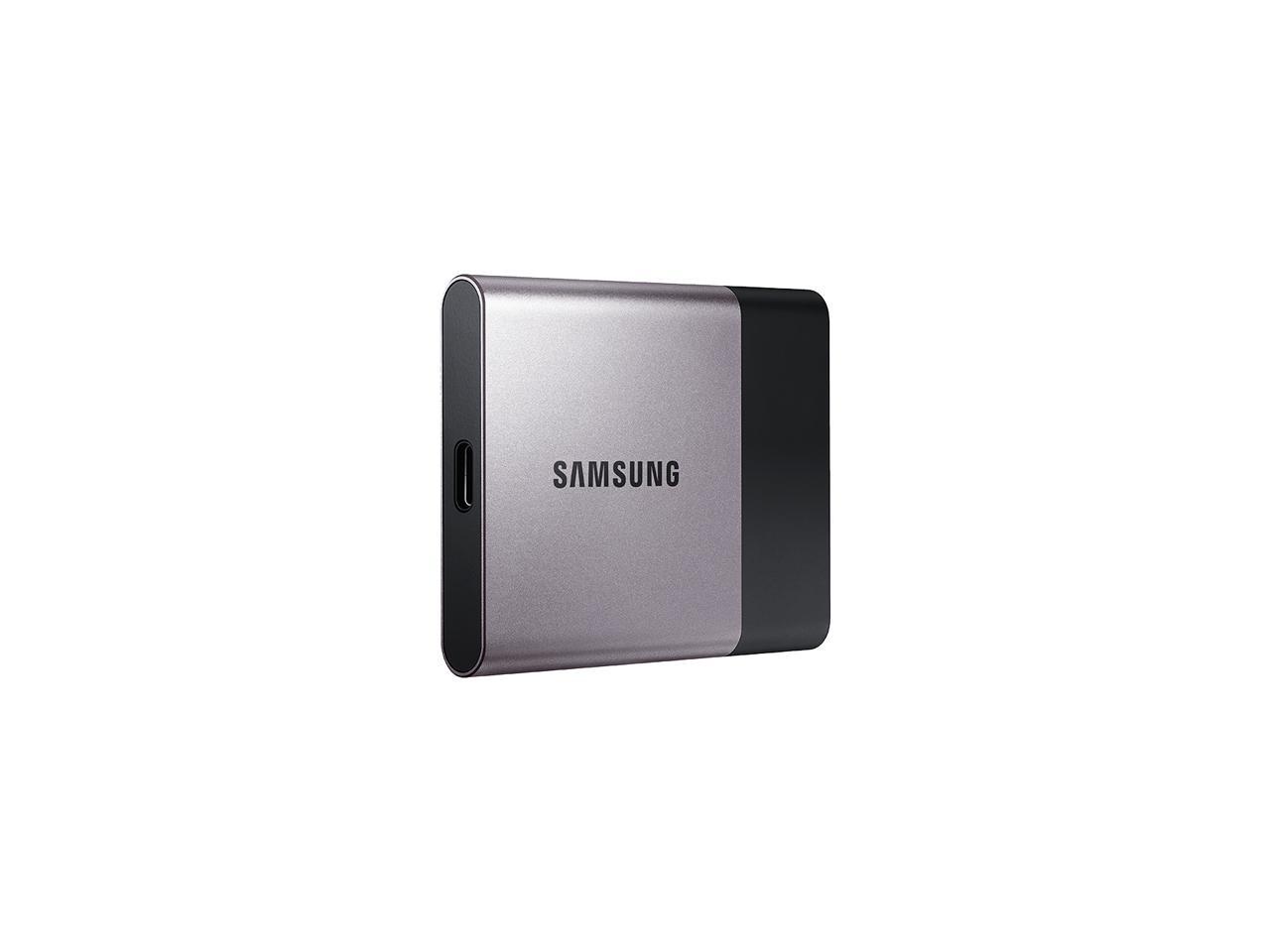 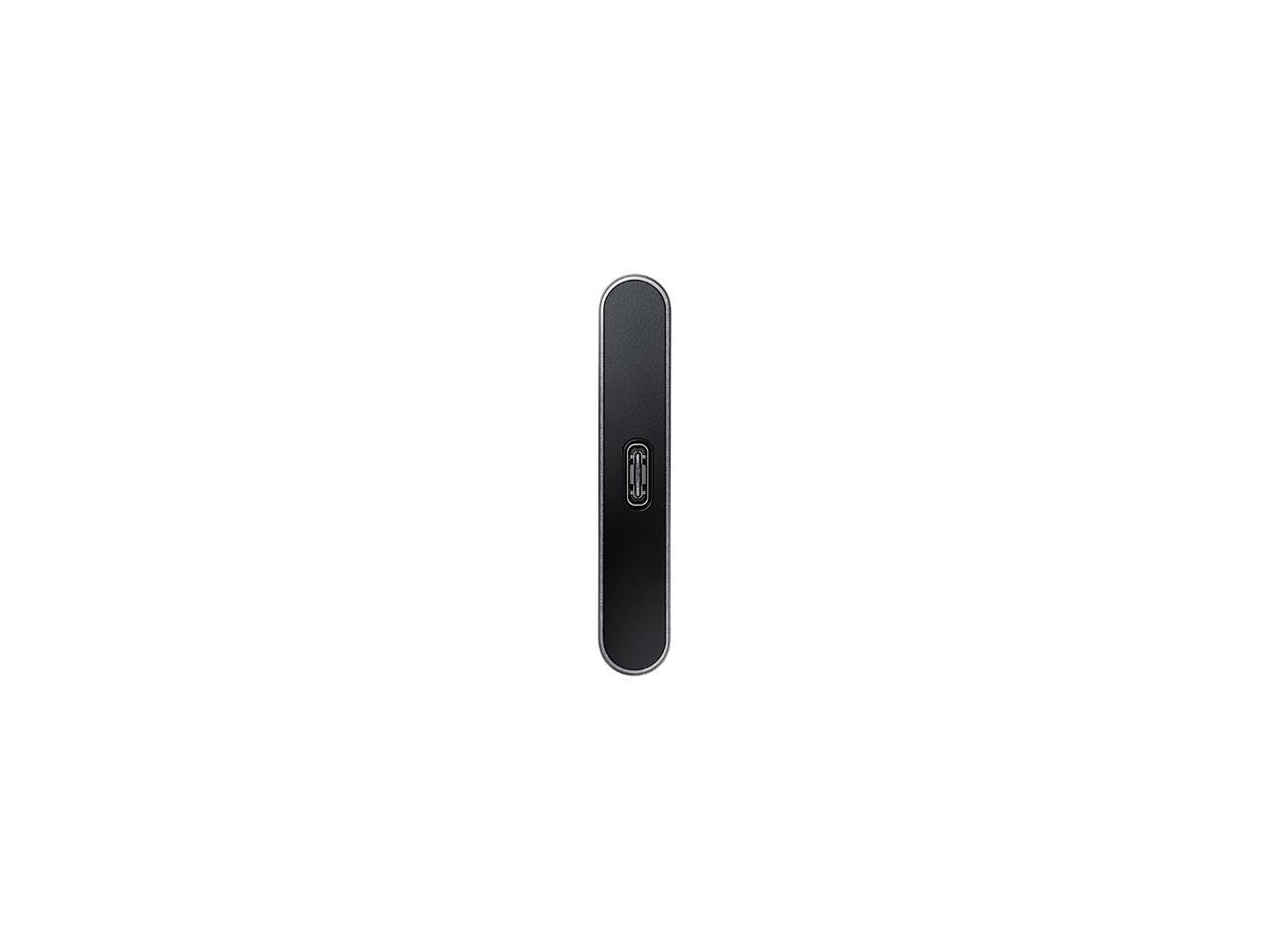 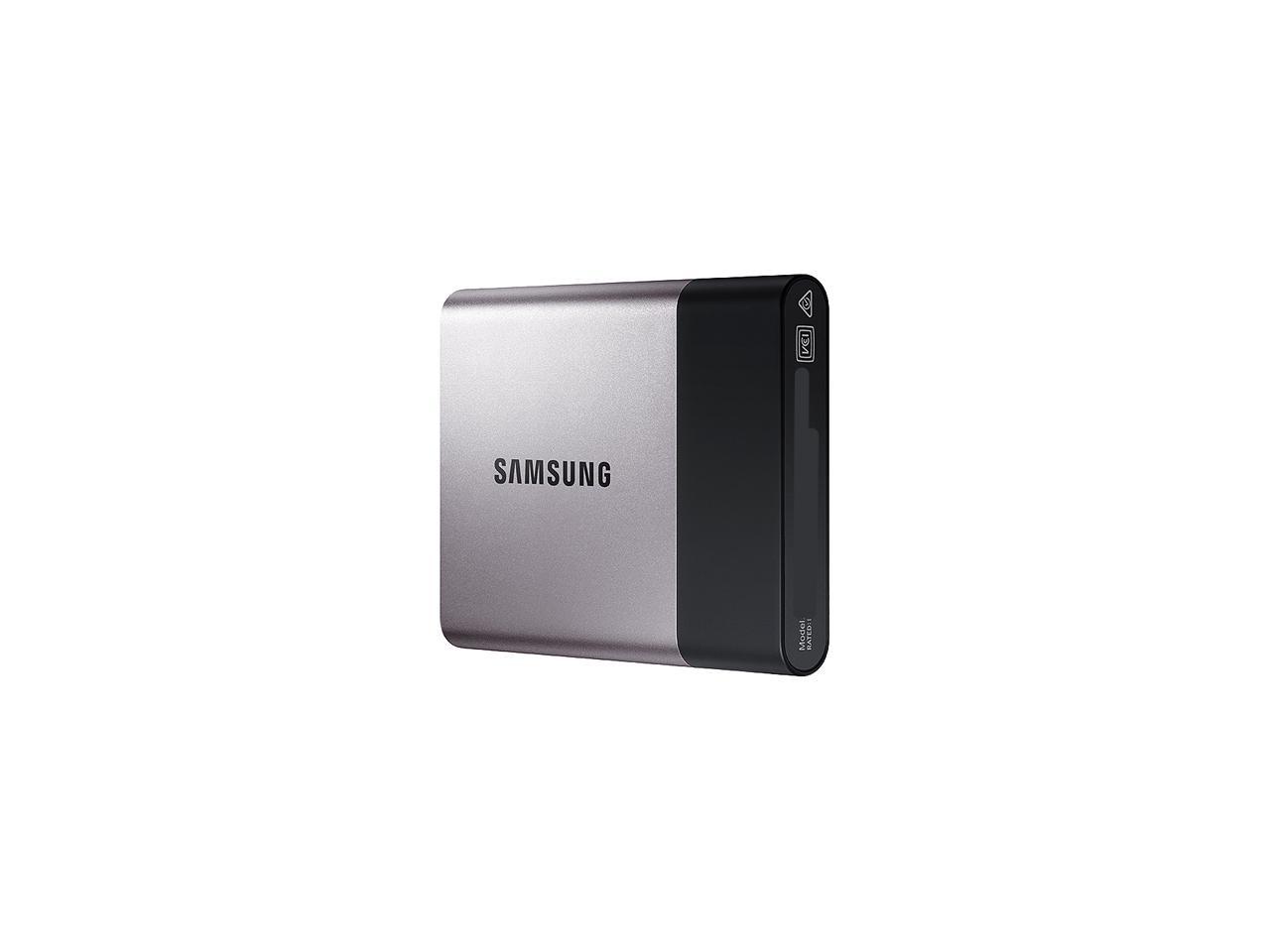 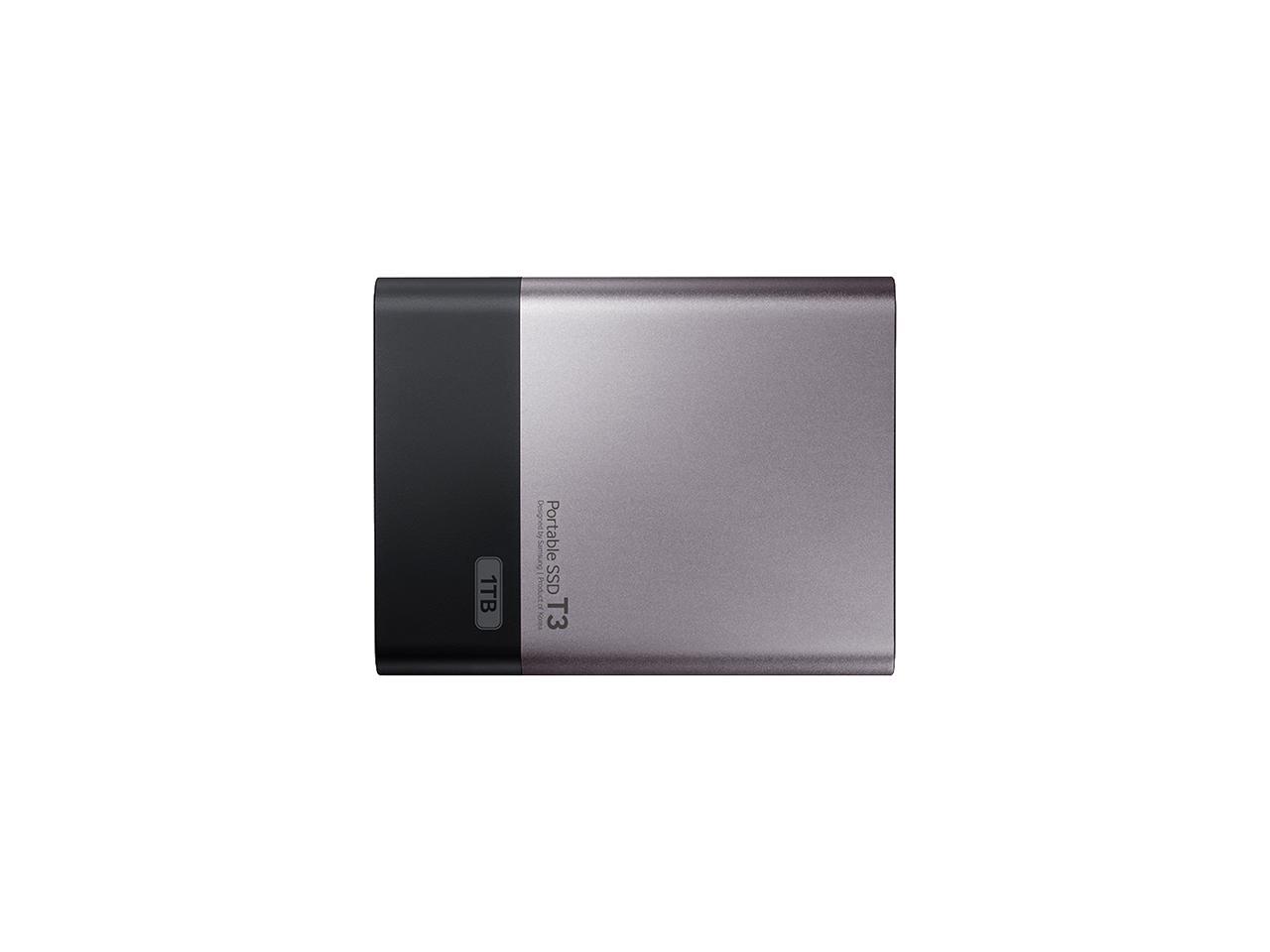 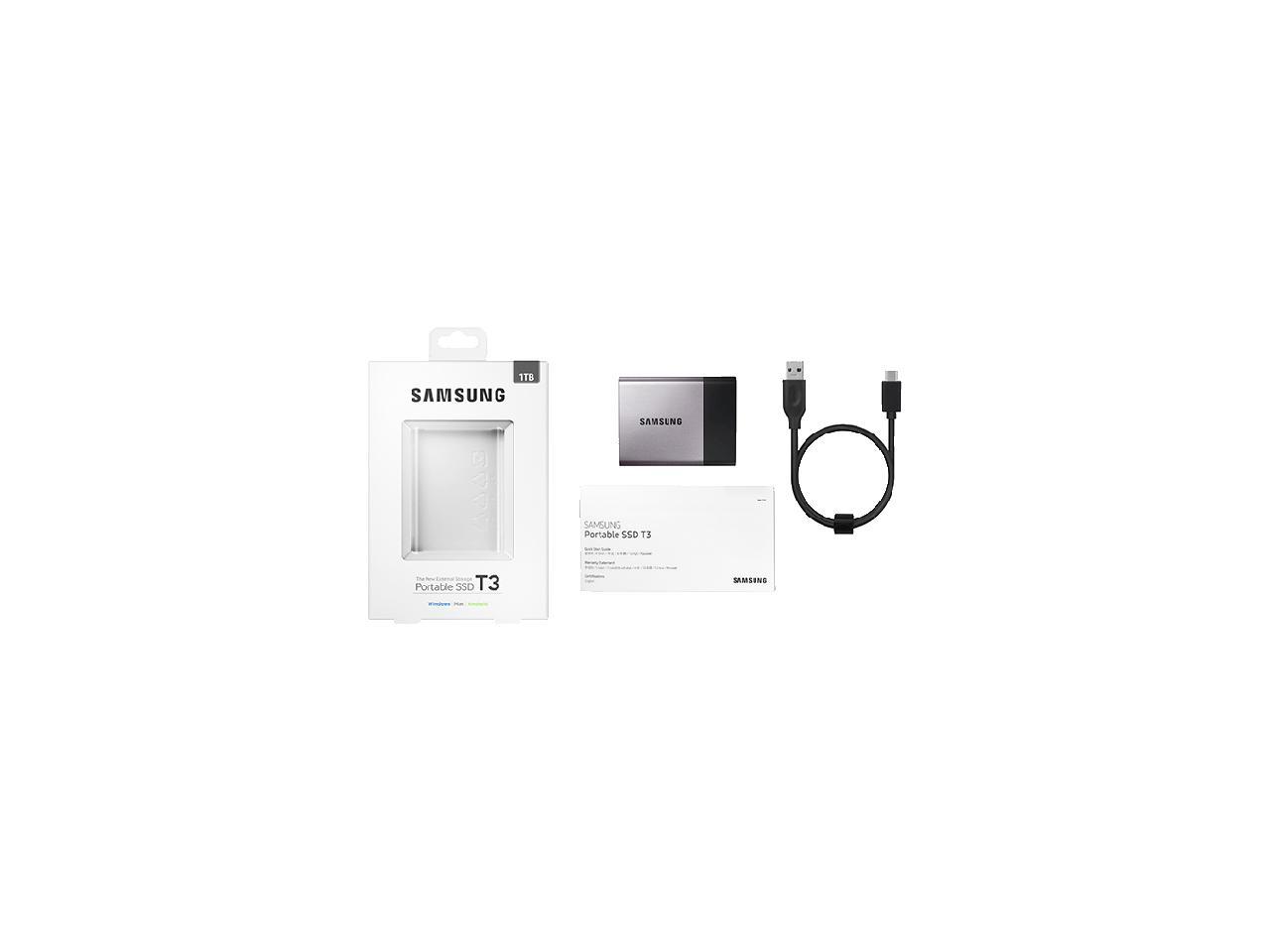 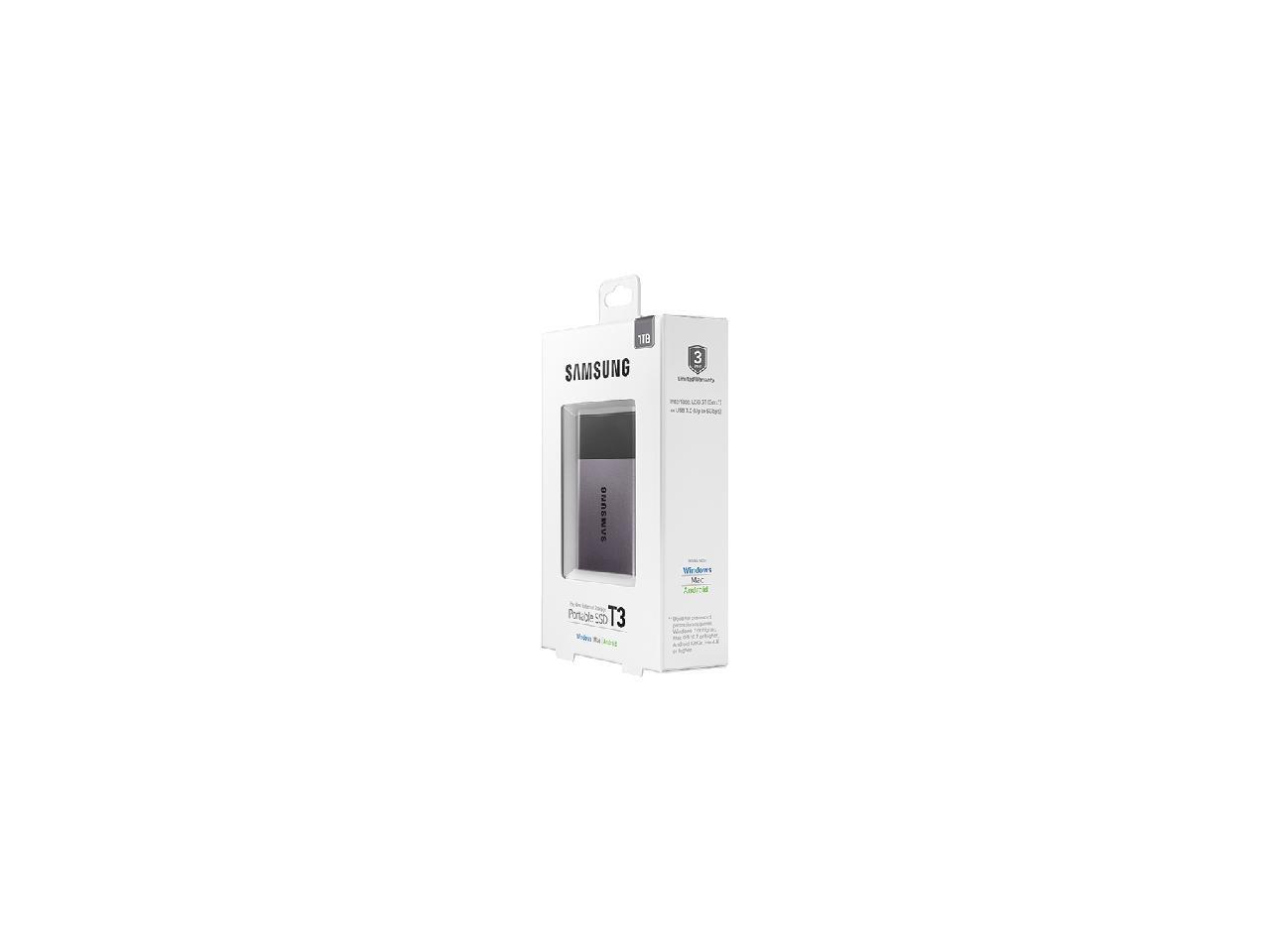 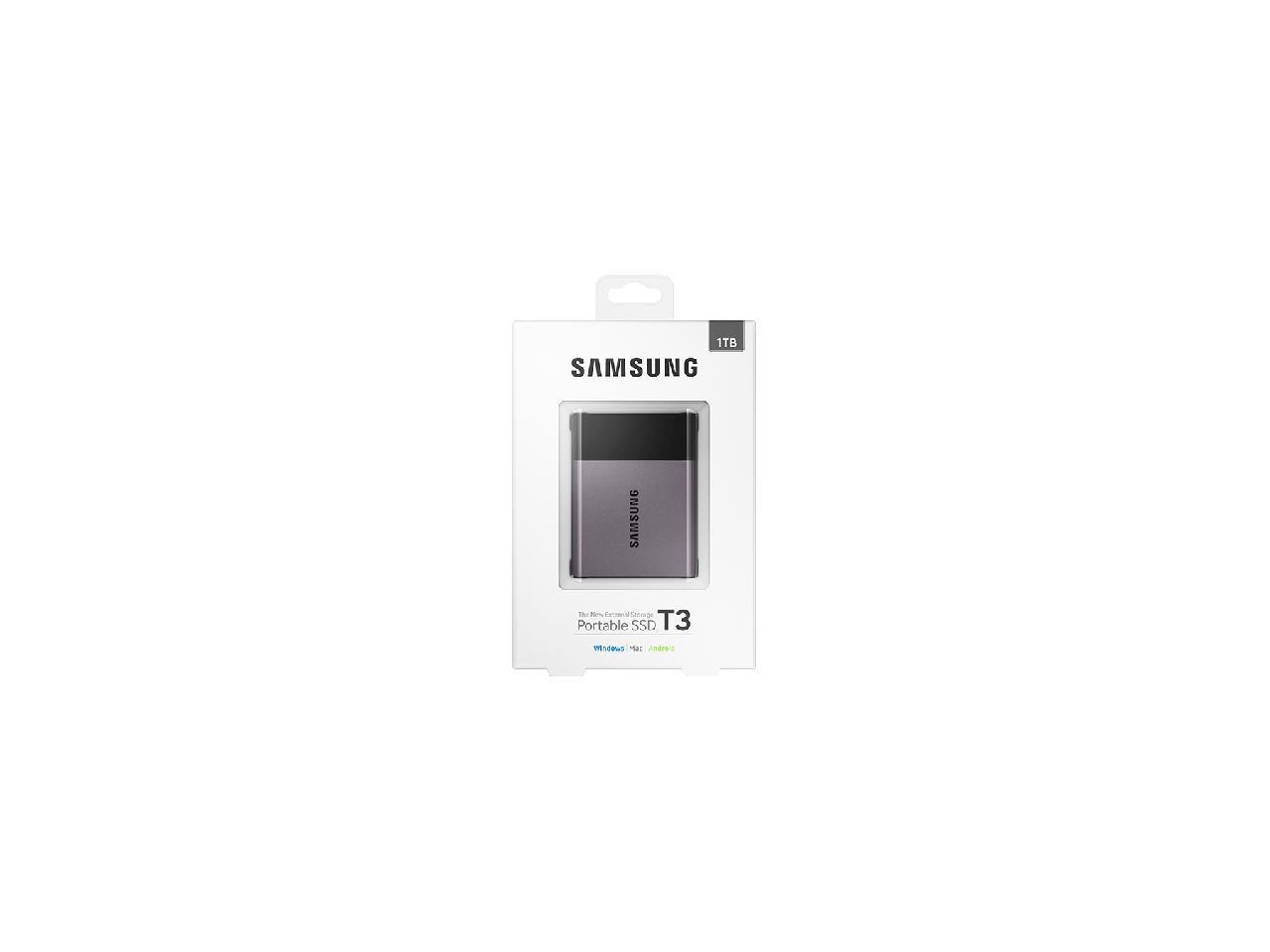 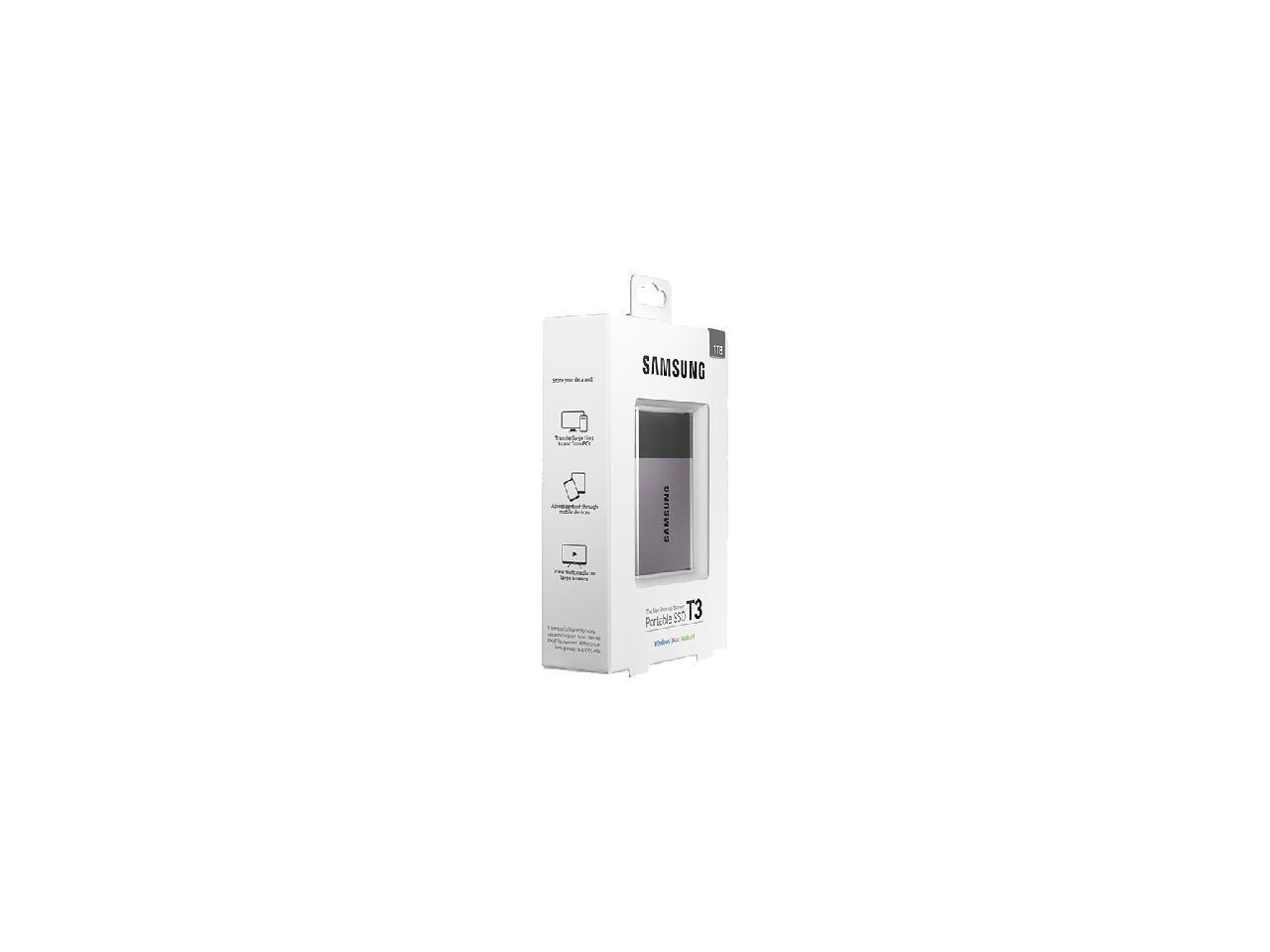 Learn more about the SAMSUNG MU-PT1T0B/AM

Pros: - Cost is great - Speed is excellent* (see other) - Small, compact design - Tons of space for all you need - Not mechanical spinning disk so much more durable

Pros: This drive will save you tons of grief on the road as it is everything you want tiny, huge, secure and blazing fast. I got this drive to store photos and video on my upcoming month long vacation and boy did it not disappoint. The build quality is excellent - full metal housing, check. USB3 speeds are great - there's no point in having 1TB if you have to transfer at 12mb/s (USB2) How fast is it? Transferring 19.8Gbs of photos and video to my Samsung 850 Evo SSD only took 1m23s! (video transferred at 270mb/s while photos took 150mb/s) Transferring to my slower Samsung F3 (platter data drive) was much slower 50mb/s and 23mb/s over USB3 The kit is just 2 pieces a USB3- C cable with velcro wrap and the drive. This thing survived planes, trains, taxis, took-tooks AND Sri Lankan humidity (which during the monsoon this year was waaaaay above 100%) The security that is included with the drive works very well and has a slick - non invasive interface that was quick to setup and requires just a prompt each time you want to access your files. The installation/security files are included on the drive.

Cons: The price does sting a bit at $300+ for 1TB of USB drive but the functionality and reliability are worth it. The drive does take a touch longer to become available on newly connected devices compared to devices you normally connect to (10-15s longer).

Overall Review: This drive has is all, size, storage, simplicity and encryption in a bullet-proof package. Samsung really nailed it on this one. I was a little weary about storing all of my photos and video from my entire vacation on just one drive but this thing held up and function as expected problem-free. The initial warning that the encryption software gives you is a touch worrying as losing your password will essentially bork your drive and require Samsung's involvement to get it back online. If you are a content producer on the go and need a solid storage solution that will get you there and back again then this is your drive.

Cons: Not that I can say, maybe a longer shielded USB 3.1 cable?

Overall Review: This is absolute the best portable drive you can possible get on the market today. I achieved a mind boggling 3.5 Gbps transfer rate on this unit? One thing one should keep in mind is that with such amazing performance possibilities, other factors in the system often becomes the bottleneck in achieving the performance potential. Battery saving features on the USB interface, poorly shielded cable, a non-optimized PCIe bus interface, a less capable internal SSD drive (this unit will absolute out perform any non-SSD internal drive), or a front penal USB port that uses an internal harness will give less than optimal results from this drive. So make sure if you want the best possible rate out of this little gem use only the included cable on a USB directly mounted on the motherboard, and use only USB 3.0 or 3.1 ports, and make sure you internal HD can keep up!! :-) This is absolute a beast of a drive in a tiny package!

Pros: - It's small and light - Casing is mostly metal - The metal casing also acts like a heatsink, keeping the drive cool - Its port is the newer USB-C type - Includes a USB-C to USB-A cable - Can be password protected with the software preloaded on the drive - The software works in MacOS, Windows and Android - Preformatted in exFAT format so both MacOS, Windows and Android can read / write to it

Overall Review: Overall, I'd recommend this unit to anyone looking for a small and fast storage device. I tried transferring a large (~70GB) iTunes library to the T3 and measured the sustained average write speed at around 394MB/s. Average sustained read was around 417MB/s. Not quite as fast as an internal SSD, but still knocks the socks of any external hard drive or flash (thumb) drive.

Pros: VERY fast USB 3.1 transfer speeds for an external drive. Decent capacity for the price, all packed up in a sleek looking case. It's a Samsung, and they make some of the best SSDs around. I've been using their internal SSDs for about 4 or 5 years now and I love them! Since it's an SSD, you don't have to worry about dropping it or knocking it off the table like you would with a traditional external hard disk drive.

Cons: The only problem I can see with this external hard drive is that the USB cord you are supplied with it is terribly short. It might be about 1 foot long at most. This can be a real problem for desktops, especially those below the desk, and even more troublesome if you need to plug it into the back of your desktop. Trust me, I have a case with no USB 3.1 front ports so I had to plug it into the back. it was bad enough I had to crawl under my desk with a flashlight to find the USB 3.1 ports, but when I have to do the same just to plug the SSD into the cord because it can't reach my desk or at least toward the front of my case where it would be more accessible, it's downright aggravating.

Overall Review: The USB port on the drive itself is the new USB Type C connection. It is nice to see these starting to be used, but since only the newest computers (motherboards, specifically) have any USB Type C connectors at all, the cord adapts to a USB 3.1 port to fit the "old" style of USB ports. It will be a while yet before technology migrates to the new Type C connectors, as they are not backwards compatible like previous USB connections have been, but not having to flip the cord over when it doesn't fit the first time is a thing that I look forward to. In case you were wondering what's tucked away inside, it appears to be an mSATA Samsung 850 Evo. I can't say that it is easily removed from the case to use as an internal drive, however. In fact, I never completely got it out, though there are reviews on various sites showing the T3's opened up for the world to see what's inside. If for some reason that was your plan, you better stick with buying an internal drive. I performed a couple of tests on this SSD, both benchmarking it with CrystalDiskMark as well as testing and timing a real-world data transfer, writing to the SSD on both USB 2.0 and 3.1. My average results are as follows: ---------- USB 2.0 (results are in MB/s) Seq Read: 41.70 - Write: 44.48 512K Read: 41.15 - Write: 44.13 4K Read: 12.87 - Write: 15.07 4K QD32 Read: 27.69 - Write: 27.85 A real-world transfer was a little slower, but not far off from the average speeds of the benchmark at exactly 40 MB/s. ---------- USB 3.1 (results are in MB/s) Seq Read: 435.1 - Write: 395.5 512K Read: 402.8 - Write: 385.6 4K Read: 25.83 - Write: 40.93 4K QD32 Read: 143.6 - Write: 159.5 As you can see, there is a world of difference between USB 2.0 and 3.1 in the benchmarks. A real-world transfer averaged out at about 263.16 MB/s on USB 3.1, showing us once again that it is slower than the benchmarks, but it was still several times faster than USB 2.0, which is still a win in my book. ---------- I think this is a nice external SSD for the price and would recommend it, but I would also suggest adding a longer USB 3.1 to USB Type C connector to your order if you plan on using this with anything other than a laptop.

Pros: - Setting up the drive is very simple. When you first plug in the device you will find that there are 3 security files, one each for Windows, Mac or Android, so you can password protect the information that you intend to store. This is another bonus if you are planning on traveling with this drive. - It can be password protected, with AES 256-bit protection advertised. - No Power Cord Needed - Just as fast as a Samsung 850 EVO internal drive (that's what's inside so that's not a surprise) - Dropped it from about 6 feet or so about a dozen times and noticed no impact to performance at all - NAND flash memory = bueno

Cons: - 3 Year warranty seems to be short for a storage device at this price range.

Overall Review: - First of all, the disk activity LED is about useless. It's on the same end of the drive as the connection port and that end of the drive will not normally be facing the user. And even if that end is facing you, the LED is so dim that is difficult to see, especially in bright light. - The drive is very thin and very slippery. It could use a couple of bands of nonskid to help it stay in place better. - Finally, I would've liked some sort of carrying pouch for it, as it is a portable drive. - If you want to achieve best performance with USB-C cable, make sure you have a USB-C cable support at least 5Gb/s transfer speed. And some cable like Apple's USB-C, Google's USB-C, Anker USB-C they only support 480Mb/s which is USB 2.0 standard for data transfer.

Cons: There really are no Cons

Overall Review: I believe the device has a 3 year warranty

Pros: After a month of usage, I am thoroughly impressed. The T3 portable drive is awesome. SAMSUNG makes quality NAND and I expect this to continue providing awesome performance for me. Using Windows 10, I saw read/write top out around 430MB/sec, and small-file write speeds hit respectable performance. I have taken it to work and back every day for about a month now, and have seen no issues or decline in performance. It's also shock-resistant so I don't have to worry about its safety when I carry it in hand in static environments, especially in the winter time. This is also a great choice for a portable drive to use as external storage for your laptop.

Overall Review: This drive is a lot lighter than I had expected. It also appears to be a revision to the T1 model, providing a new casing and the switch to a USB-C connector. The cable provided is USB-C to USB-A, so it will work on your current legacy USB connectors.