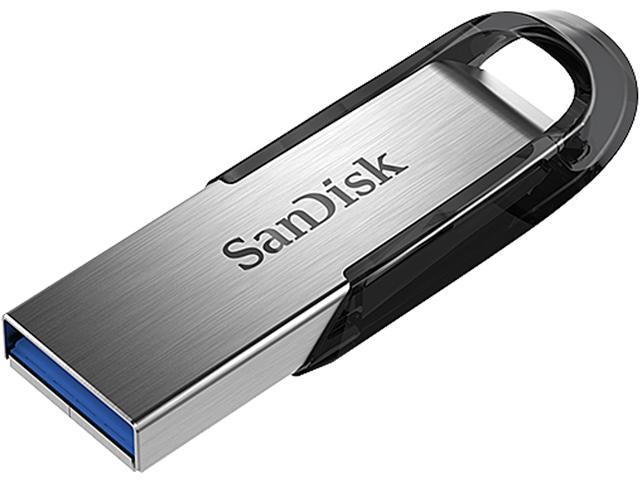 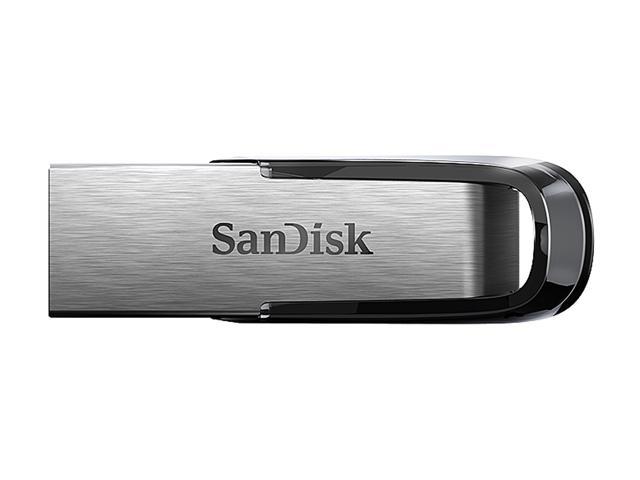 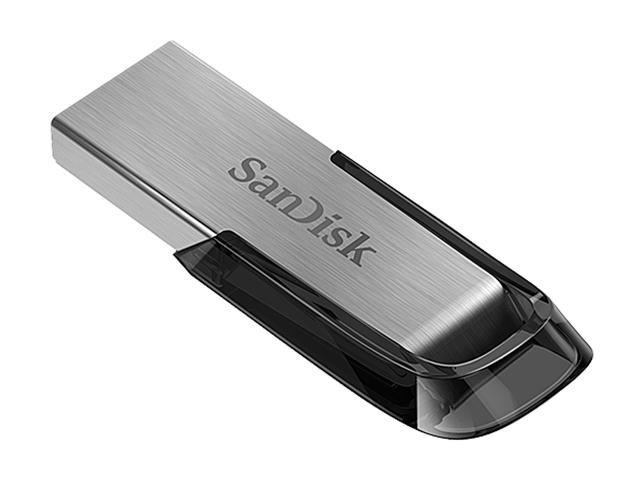 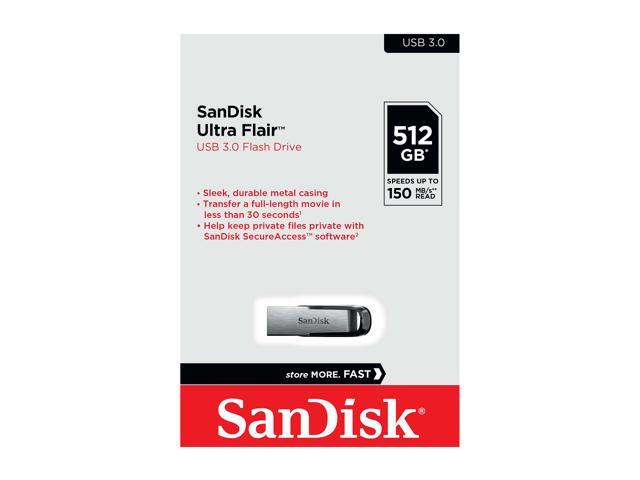 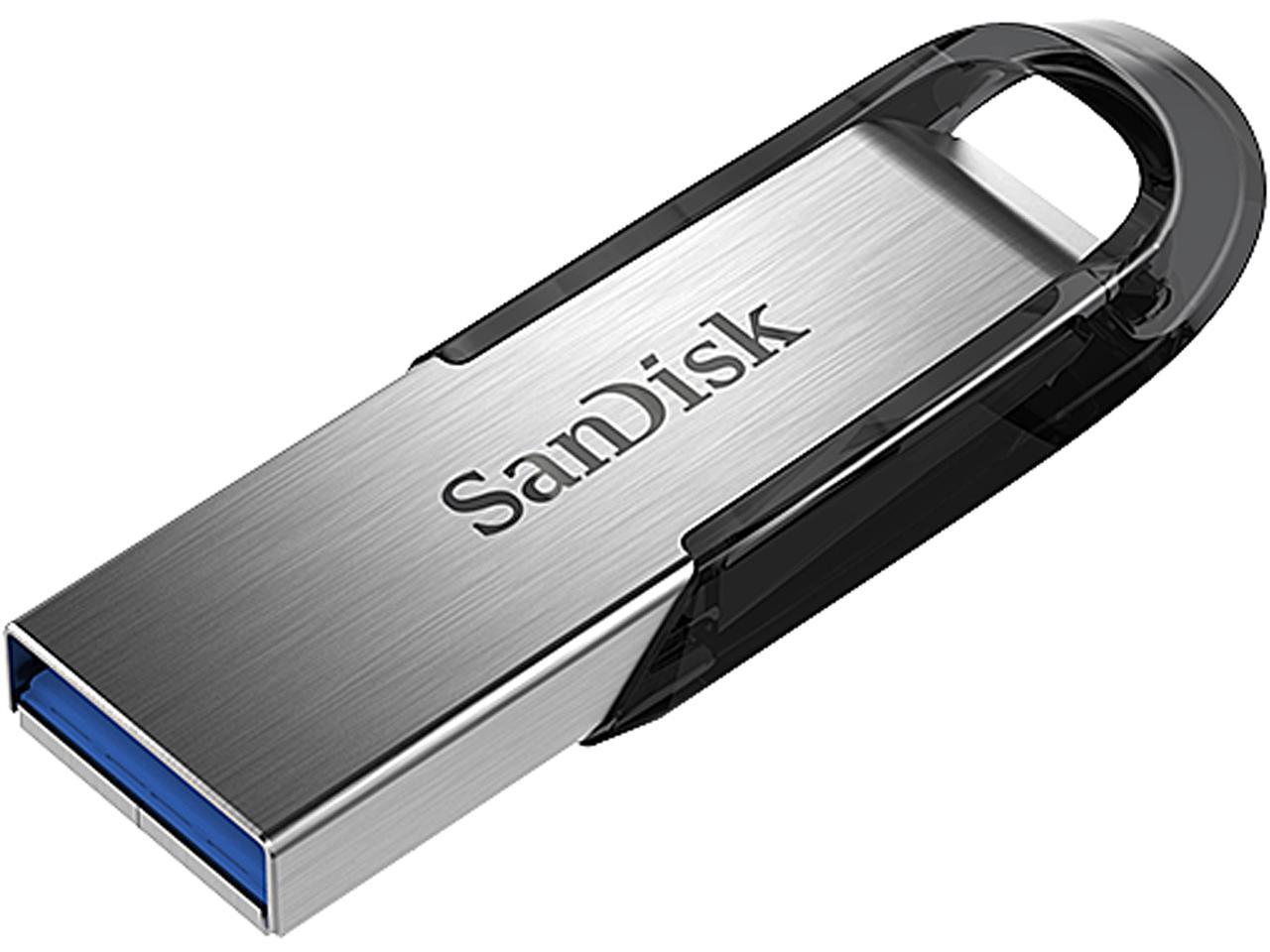 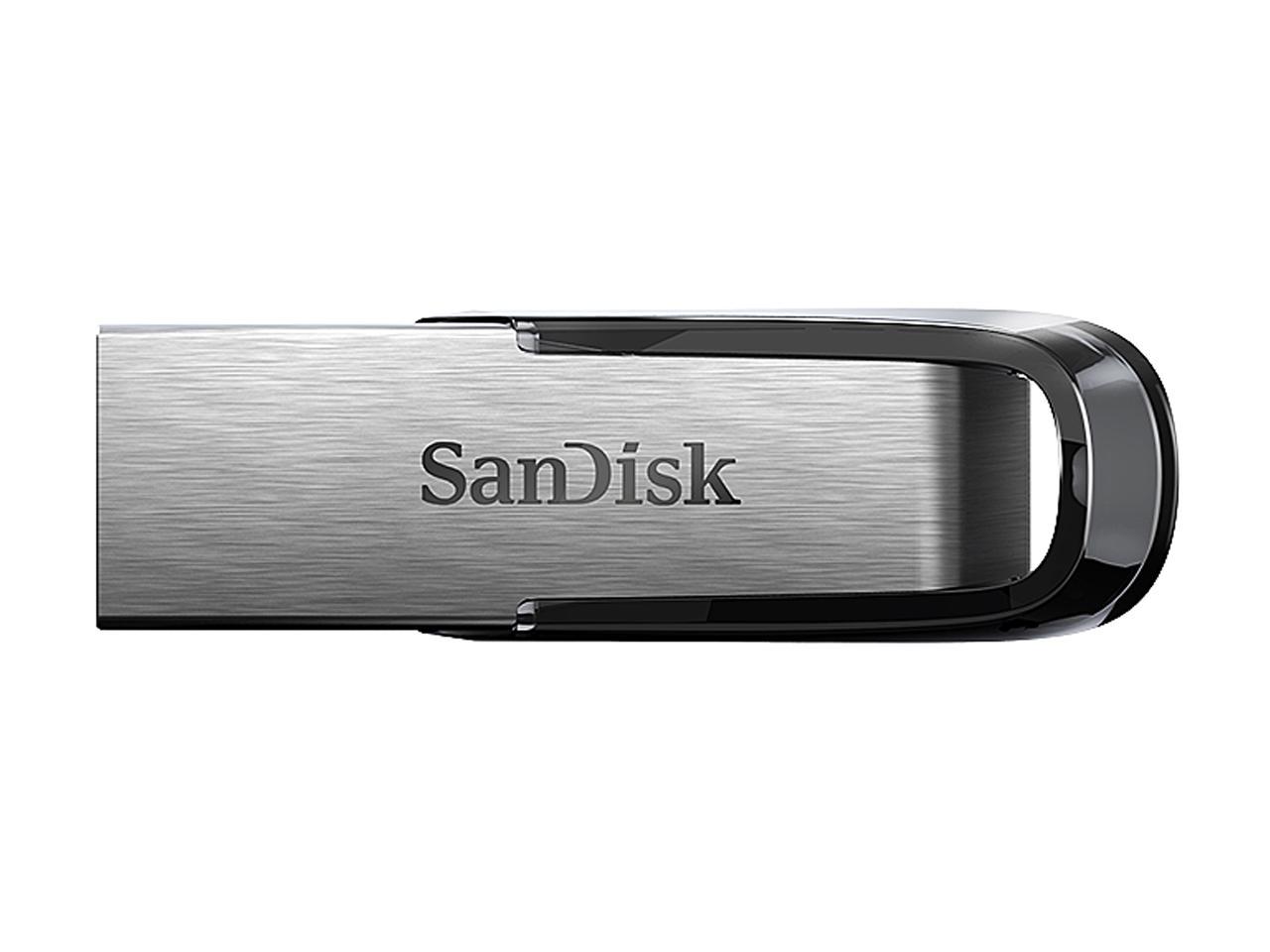 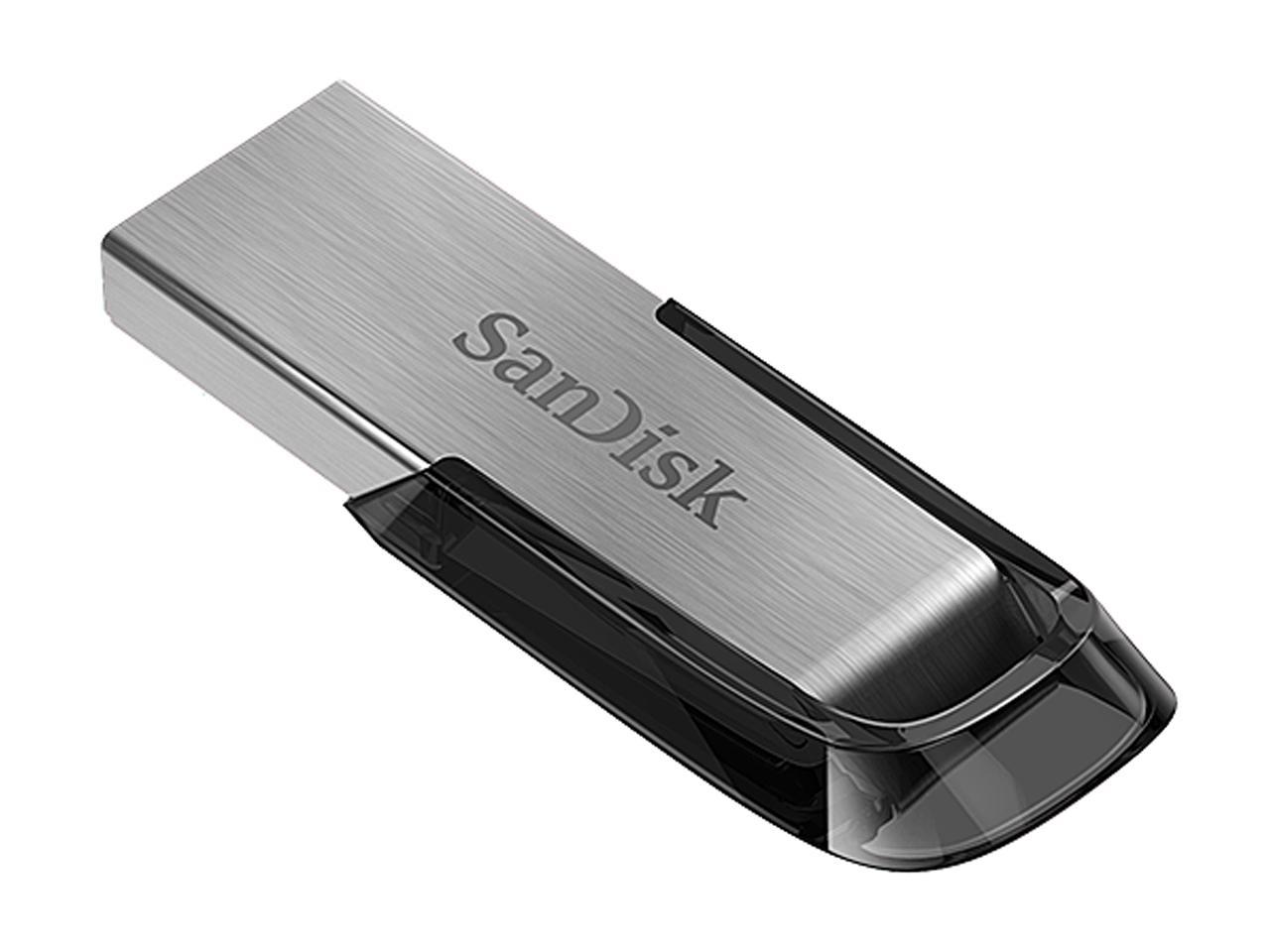 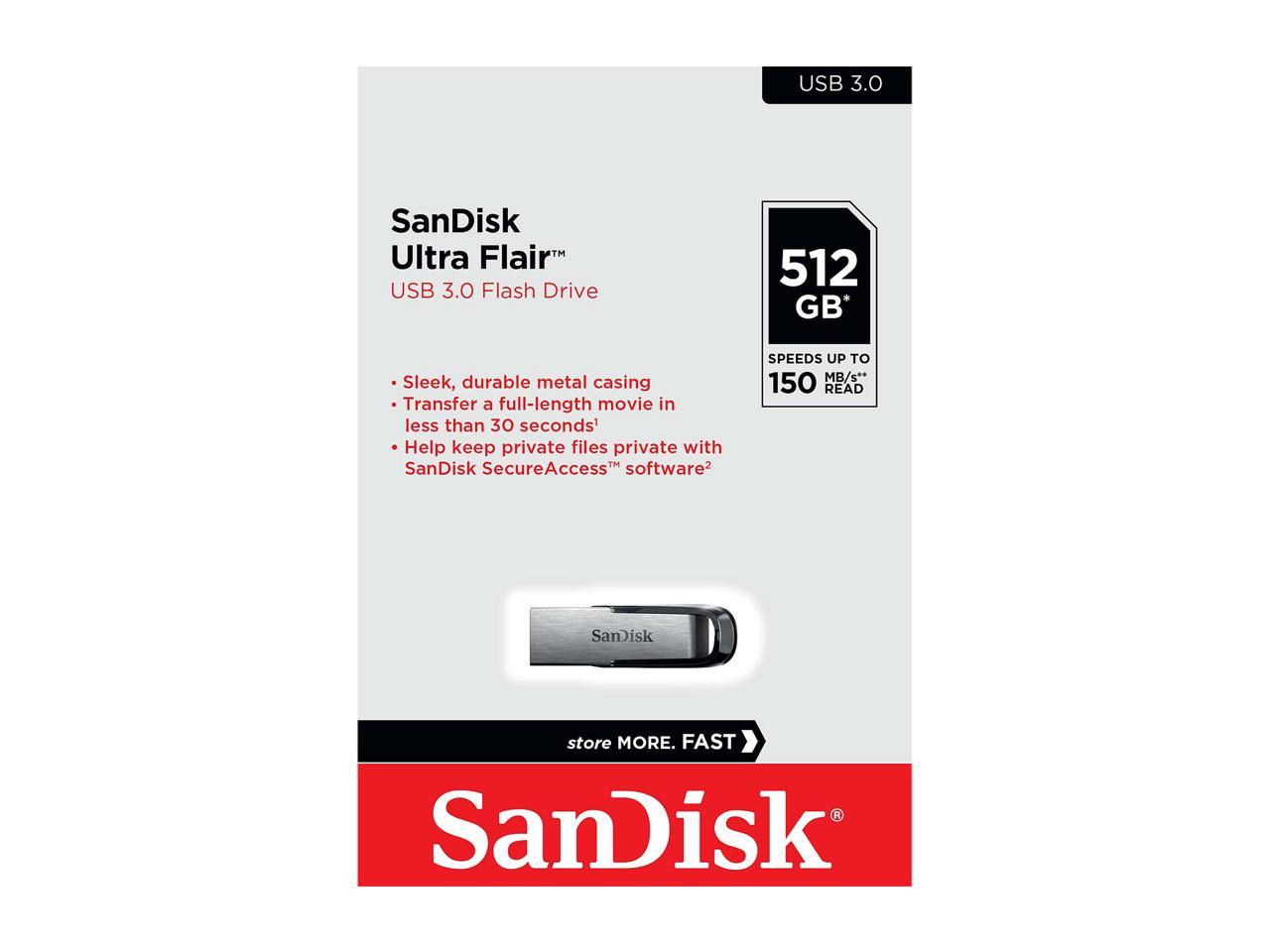 Pros: Still putting it through the wringer, but this Ultra Flair is standing up pretty well to the gamut of small file transfers and running a Windows Vista VM. According to Crystal Benchmark, this flash drive - when plugged into a USB 3.0 port with no other USB devices being used - is capable of Sequential Read = 125 MB/s (QD32 and QD1) Sequential Write = 43 MB/s (QD32 and QD1) Random Read 4KiB = 4.3 MB/s (QD32) / 3.6 MB/s (QD1) Random Write 4KiB = 2.2 MB/s (QD32) / 1.8 MB/s (QD1) Compare the Random Read/Write values to a regular 7200rpm hard drive (a Toshiba MD04ACA) Random Read 4KiB = 1.6 MB/s (QD32) / 0.73 MB/s (QD1) Random Writes 4KiB = 1.8 MB/s (QD32) / 1.8 MB/s (QD1) This flash drive's Random Read performance far exceeds that of a fast SATA platter drive by a factor of 2.6 for QD32 reads and 4.9 for QD1 reads. Random Write performance is only slightly better by 19% for QD32 and identical at QD1. This makes these flash drives as good as (if not better in certain situations) as old fashion hard drives, especially if you're using them as a boot drive or VM drive like I did. I get slightly faster boot and loading times on my Windows Vista VM than I do on my MD04ACA. Sequential writes could be better, but sequential reads are on par with most portable external hard drives. However, because of the inherently faster random read capability of flash drives, this drive will feel nimbler. It's a nicely packaged drive with real aluminum covering most of the drive's body. It's significantly more portable than a portable external hard drive.

Cons: Less than 2 minutes into reformatting the drive for the first time before a benchmark, this Ultra Flair thermal throttled and disconnected. The metal cover is almost too hot to touch (think metal teaspoon in a freshly brewed cup of coffee) and it needs a minute taped to a used can of compressed air to get the temperature back down again. I really wish there was an internal temperature sensor that could be read with a hardware monitoring software like HWiNFO or Speccy. I'd love to see how much of a difference clamping an Intel CPU cooler onto this flash drive would make. I suspect it's thermal throttling that causes sustained writes to drop from a peak of 50 MB/s down to 16 MB/s. This can be hooked onto a keychain, but the loop for that is made out of plastic. In fact, half of the back piece is made out of the same plastic they make dollar-store hair clips out of. As with all gadgets encased in plastic, be gentle with it. The price to size ratio isn't in this flash drive's favor compared to portable external hard drives. In fact, you can pick up a 1 TB portable hard drive for roughly twice the cost of this flash drive. To get the same capacity with an Ultra Flair (this 128GB version is the highest capacity model Ultra Flair) , you'd need to spend almost $100 and stripe or JBOD them together. While that sounds like a fun idea, you can buy a 2TB portable hard drive at that price and not worry about a single faulty flash drive destroying all of your precious work. If you are a speed addict, then a SATA SSD in a USB-to-SATA or eSATA enclosure might be best for you. A cheap 120-128GB SSD is only $10 more, won't overheat, and will go way past the read and write speeds of this flash drive. I wouldn't recommend faster flash drives unless you like burning your fingers.

Overall Review: I don't normally publish IOPS figures because merely stating those figures is meaningless without being able to control the size of the packets and latencies involved during the measuring. Different packet sizes and Queue Depths will lead to markedly different IOPS figures, and I don't have a benchmarking software or arrangement to measure all of those factors anymore. I'm not complaining about getting 20 MB/s under the advertised read speed because that's the nature of buying electronics. They may be made in high-tech facilities with margin of error measured in microns, but the random nature of, well, nature means that not all devices will perform consistently with each other. Like with CPUs, flash and SSDs can overperform its stated specs or underperform: it's all in the luck of the draw. I'm not seeing any behavior that would indicate flash or controller failure, either. Like almost all modern flash drives, this came formatted in exFAT from the factory, which may cause compatibility issues with older Unix-based OS. It's better to format it in FAT32 (which limits you to 4GB transfer files) or NTFS for maximum compatibility with those OS. And depending on how large the sector sizes are during the format (I think it was 4096kB from the factory), your file size on the drive versus its reporting file size may differ. Don't be alarmed by a 1.7 MB file taking up 1.72 MB on the drive, that's because of the size of the sector chosen during the drive's formatting.

Pros: For only $10 I can't complain. Only needed it to put Windows on a new drive. It feels solid though and fits in snugly.

Overall Review: Wish it came with a cap for the end so it doesn't get stuff inside when in my pocket. No biggie though.

Pros: A bog-standard little flash drive. Does the job.

Overall Review: Bought this to temporarily back up some files while I upgrade to an SSD. Transferred about 80GBs of data. I didn't test the read/write speeds, but it didn't take long. Some reviews say it gets almost painfully hot to the touch during long writes, but mine only got slightly warm, barely above room temperature.

Cons: - At first the write speed was 25 MB/sec, but then dropped to around 10MB/sec. I guess you get what you pay for. I won't argue with the convenience, but I wasn't aware that some USB 3.0 storage devices aren't build to allow the full transfer speed. I guess larger USB thumbdrives work faster. - Over a long write, it does get very warm to the touch.

4 out of 4 people found this review helpful. Did you?
Manufacturer Response:
Hi Anonymous, I am Jose from SanDisk® Global Customer Support Team. We regret to hear about your experience. We would like to know more about your issue in order to isolate the possibilities. Please feel free to contact SanDisk® support at 1-866-SANDISK with the Case ID: 5301395 or submit a support request at www.sandisk.com/support. We will certainly assist you towards an appropriate resolution. Thank you, Jose, SanDisk® Support.
Mitchell D.
Ownership: 1 week to 1 month
Verified Owner
Fast but it heats up easily12/5/2018 9:01:44 PM

Cons: I use it for storing videos then watching them on different devices. After playing a 20 min video, it gets noticeably warm to the touch. Its never hot enough to burn you, but it is surprising how warm the USB drive actually gets.

4 out of 4 people found this review helpful. Did you?
Manufacturer Response:
Hi Mitchell I am Sam from SanDisk® Global Support Team. We regret to hear about your experience. We would like to know more about your issue in order to isolate the possibilities. Please feel free to contact SanDisk® support at 1-866-SANDISK with the Case ID: 4962058 or submit a support request at www.sandisk.com/support. We will certainly assist you towards an appropriate resolution. Thank you, Sam, SanDisk® Support.
Kristopher B.
Ownership: 1 day to 1 week
Verified Owner
Well, its a thumb drive fast to read and slow to write large files7/20/2019 4:59:54 PM

Overall Review: About what I expected, however I was hoping for a little fast write speeds on USB 3.0, 10 MBps is pretty slow I get 100+MBps write speeds to a WD passport

3 out of 3 people found this review helpful. Did you?
Manufacturer Response:
Hi Kristopher, I am Jose from SanDisk® Global Customer Support Team. We regret to hear about your experience. We would like to know more about your issue in order to isolate the possibilities. Please feel free to contact SanDisk® support at 1-866-SANDISK with the Case ID: 5412147 or submit a support request at www.sandisk.com/support. We will certainly assist you towards an appropriate resolution. Thank you, Jose, SanDisk® Support.
Jason M.
Ownership: more than 1 year
Verified Owner
Small, Fast, Lots of Space, No Indicator Light2/14/2018 5:15:39 AM

Pros: -Increadibly small. I've rarely encountered a smaller drive. -Decently Fast. The USB 3.0 is very fast compared to USB 2.0. Not blazingly fast like the newer USB 3.1 or C, but still good. -Plenty of Space. On Windows 8, it registers as having 111GB. I've ended up using it mainly as a storage device, rather than a mobile one, as 100+ GB is not insignifcant for me.

Cons: -The lack of an indicator light. I didn't think it would matter to me, but it turns out that feedback from flash drives can sometimes be important. Such as... -Sometimes I need to insert the drive 2 or 3 times to get it to register. It seems to be worse on older computers, but it occasionally happens on my desktop as well. This isn't unique to this drive, but the lack of an indicator light makes the problem worse. Not a huge issue, but annoying. -Easy to lose. While the size can be a plus, it prompt me to fashion a makeshift lanyard for the drive, as it was quite easy for me to lose it.

Overall Review: -Depending on the user, I could see this device as a good choice for always-in storage on a desktop (or possibly laptop or tablet). The small size and lack of an indicator light keep it out-of-the-way. I'm maxed out on USB 3 ports for my desktop, but if I had one to spare, I'd probably keep mine in 24/7.

Pros: Worked on my MacBook

Cons: Won't open on my Dell

Overall Review: I just purchased a Dell XPS 13 and nothing happens when I plug in this flash drive. I know it works because it opened on my Mac, but the PC won't even recognize the fact that something is plugged into the USB port. Anybody able to help?