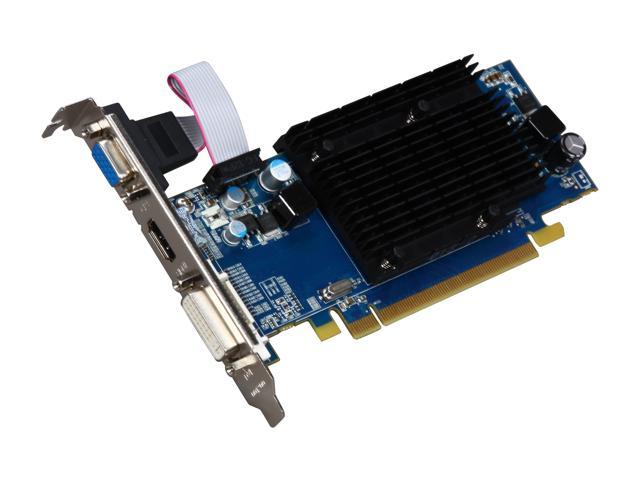 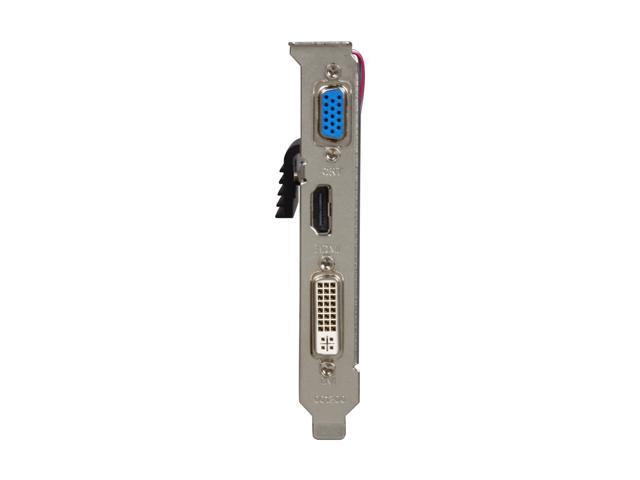 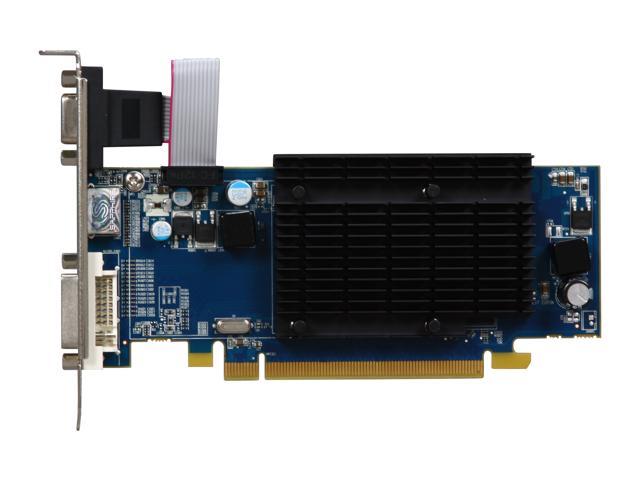 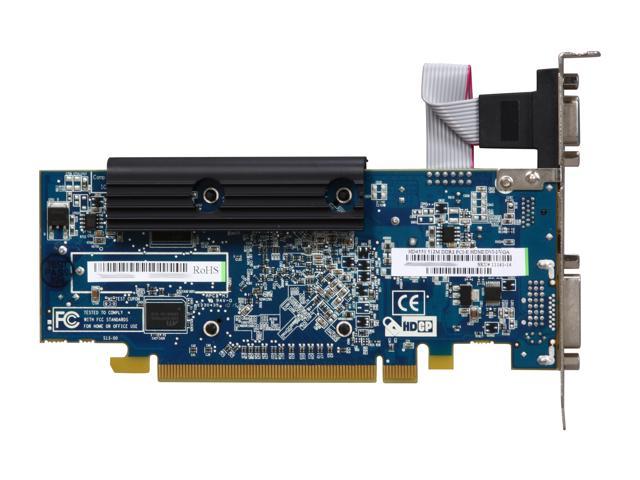 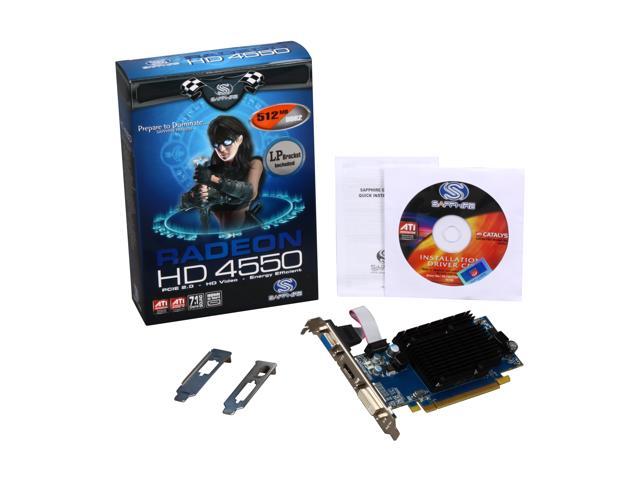 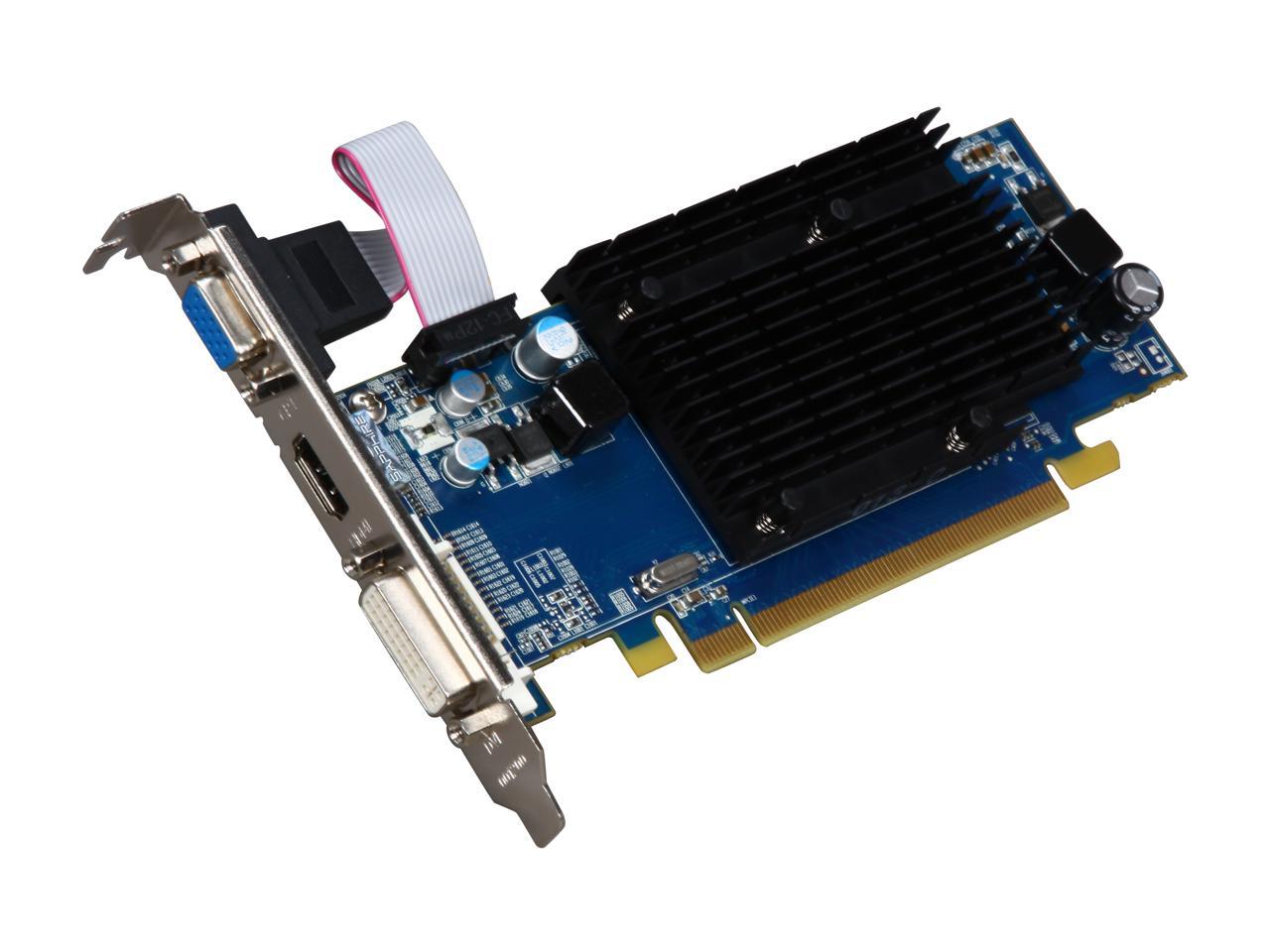 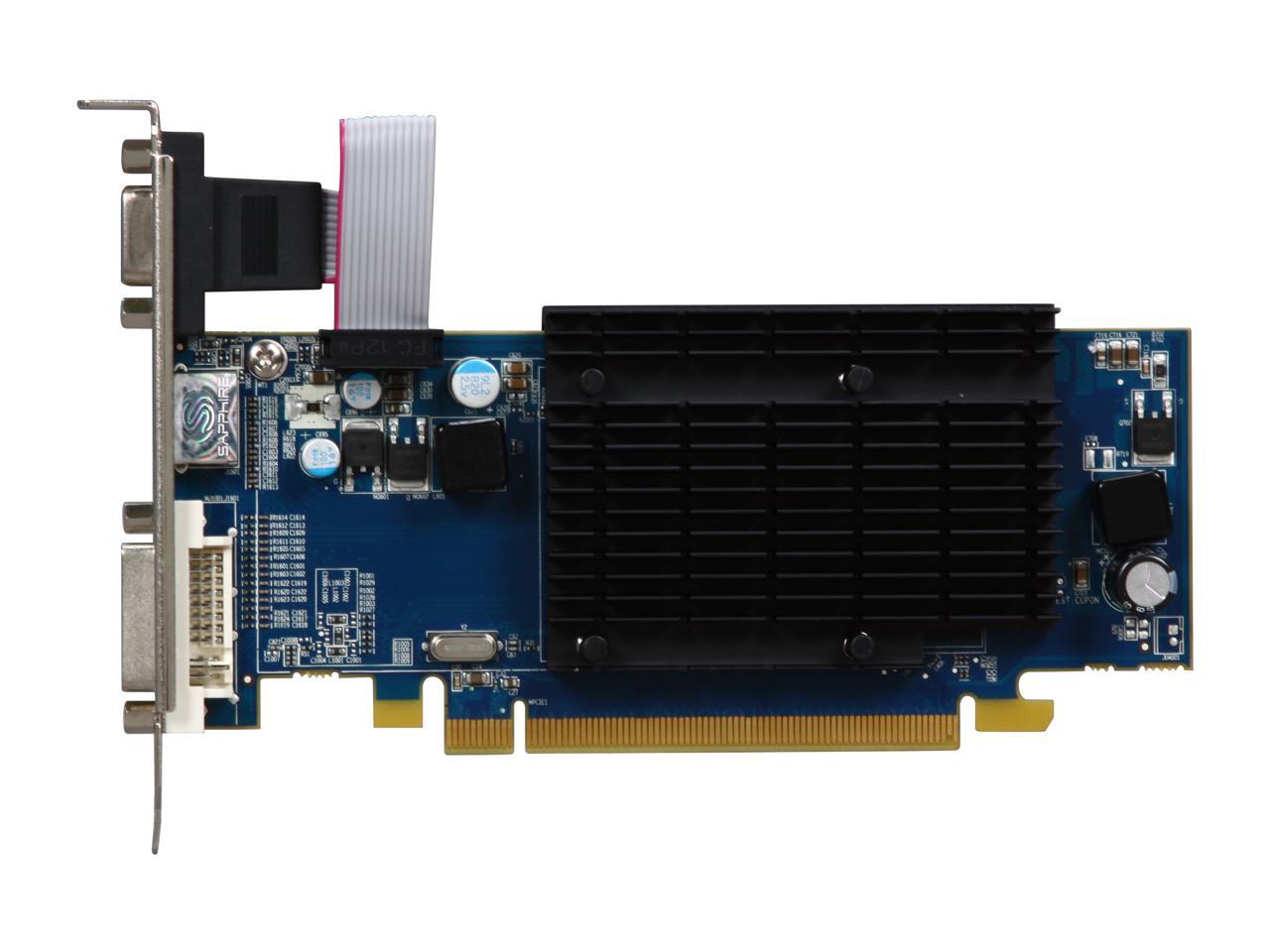 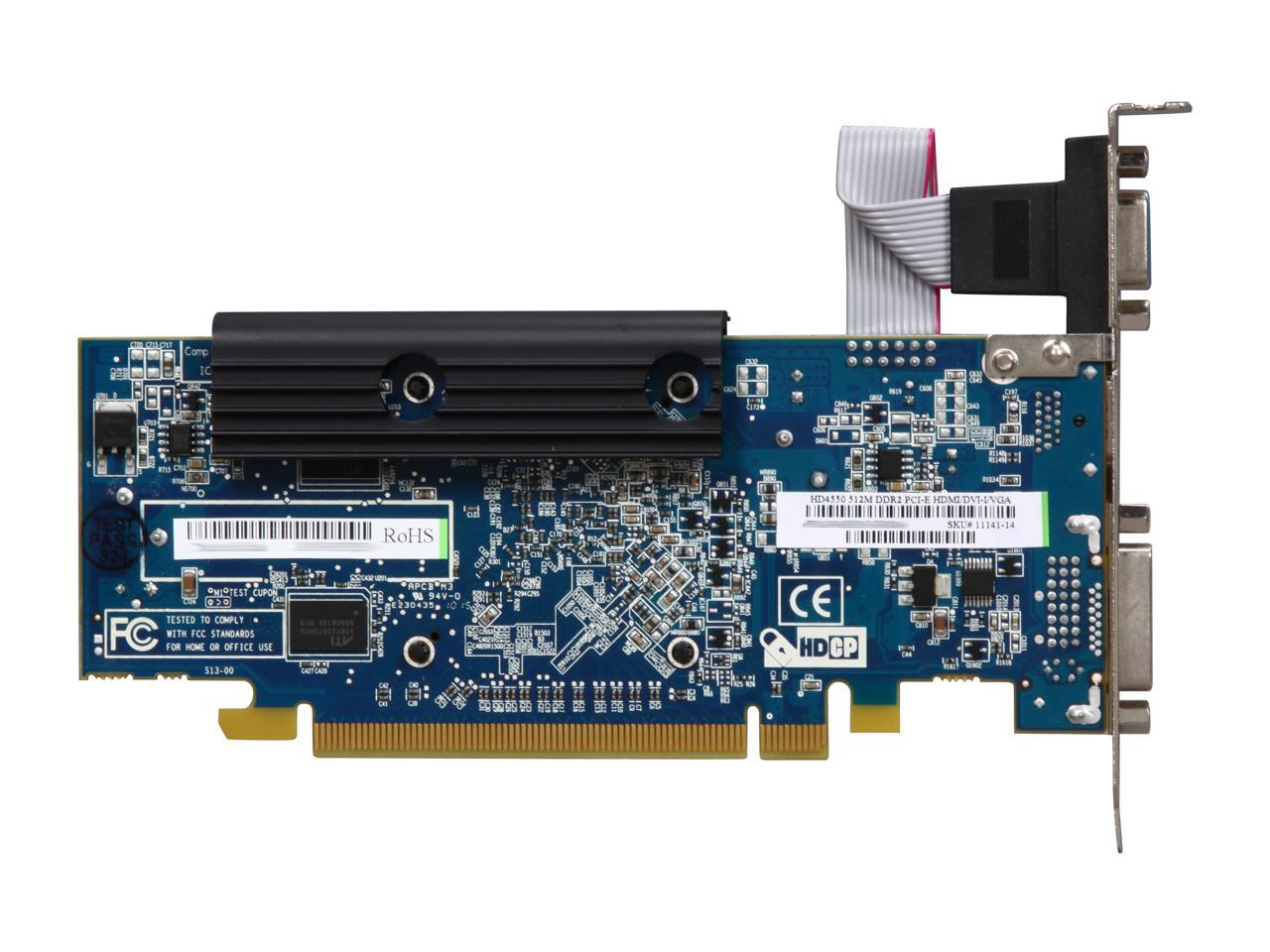 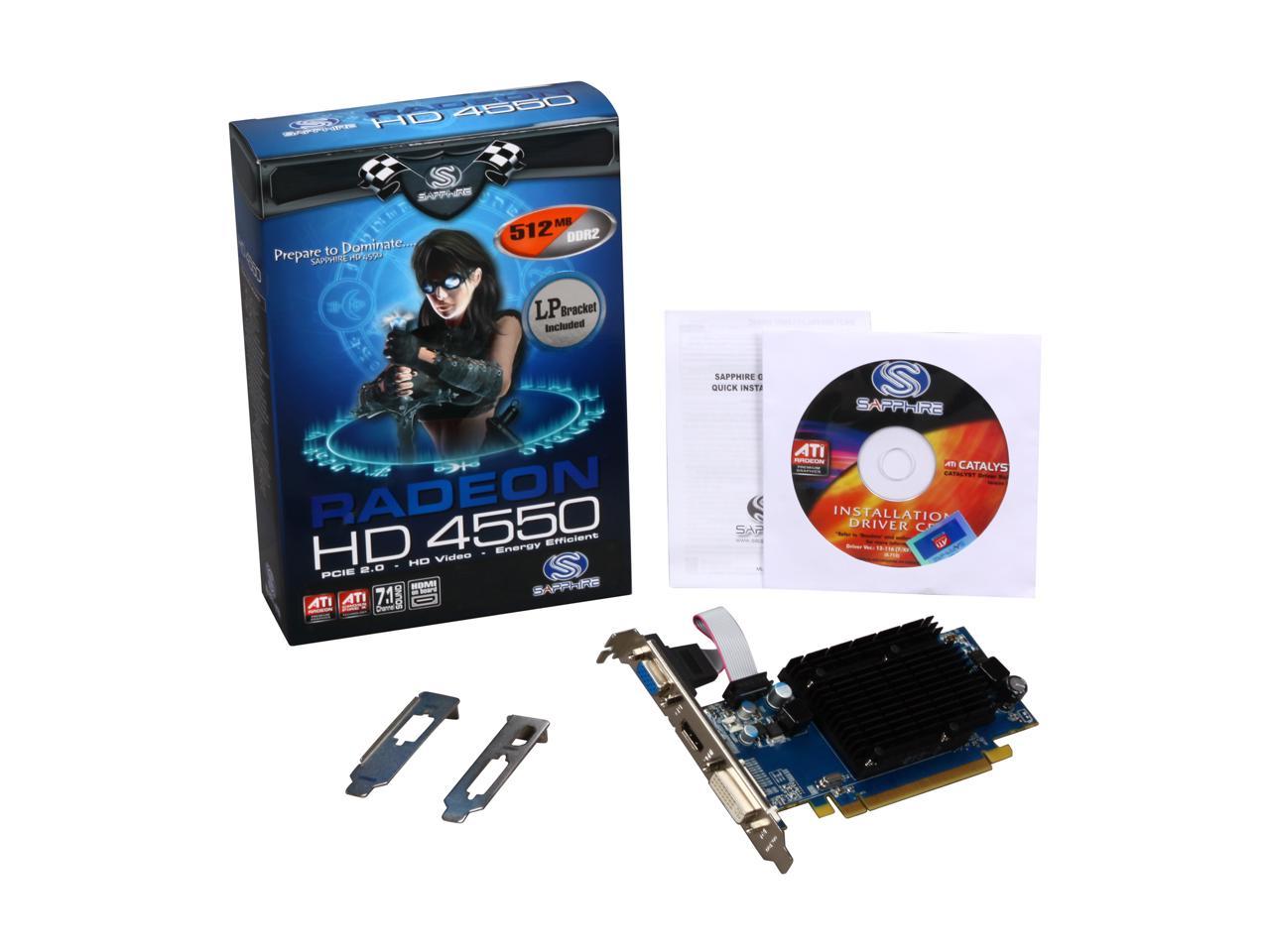 Pros: Bought this just to get off of integrated, wasn't expecting anything amazing as far as games but it holds it own.

Overall Review: Being fan less and having it in a HTPC case with one fan upfront pulling air out isn't a problem like I thought it would be. Even under load in CS:S or TF2 it doesn't come close to over heating. Easily overclocked to 640GPU/480memory, still brings manageable temps. This is perfect for running games on lower resolution screens decently. Very satisfied, especially for the price. My low power build: Foxconn M61PMV AM2+/AM2 CORSAIR XMS2 2GB Sempron AM3 140 SAPPHIRE Radeon HD 4550 Western Digital Caviar Black 500GB hec Black 0.7mm Thickness SECC Steel 7K09BBA30FNRX Micro ATX Media Center 300W Power Supply / HTPC Case

Cons: Company of Hero's crashed twice. No biggie. I think it's just a RAM flaw. [It was taking up 1.6Million K's, the most I've seen any EXE take up] And if you go to places like "Can you run it" etc etc [Tells you if you can run a game], it reads your card as a 4350. Probably self explainable, since 4350 is partnered up with the 4550. Otherwise. NONE. Perfect card.

Overall Review: Card is flawless. Happy with my purchase.

Pros: This was bought in 2010 for a replacement to a 2007 PC on which a video card burned out on. Sapphire makes good quality video cards, it worked out of the box, and did what it was suppose to do, slight advantage over other 4500 to 4600 cards I saw.

Pros: I got this because my older computer's onboard video couldn't drive a 22" screen with more than 1 or 2 webpages open and it works flawlessly. Window's Experience Index changes Graphics: 3.3 to 3.7 Gaming graphics: 3.0 to 4.6 Memory: 5.8 to 5.9

Cons: none that I have found so far

Overall Review: The memory increase was from no longer using RAM to aid graphics. Do research on how to disable your onboard graphics before you start installation Don't expect a miracle I can now play CIV IV with graphics all the way up, I can run google earth smoothly full screen at 1680 x 1050 (max for screen) with Flash web pages open

Pros: Installed easily. Was functional after googling the overscan issue and tweaking.

Overall Review: It is just outdated and slow. Even after paying $5 after rebate, I won't use it in this machine. I actually may never use it, with the 15% restock fee and the cost of shipping it is not worth sending back.

Cons: its not a 5770 rebate will take a few months

Pros: WOW the HTPC setup is now complete. Have an older DDR2 computer with a pathetic onboard video chip. This card slips in and in 10 minutes all 4 downloaded updates are complete from the Sapphire site with seamless efficiency. Wish all transactions worked this way. Old setup had picture tearing and chop when panning from side to side. Now with 1080 HD clarity the pans are smooth and chop free, the 7.1 HDMI is an added plus for theater sound. Card itself uses very little resources - that's good cuz my PSU is pretty much maxed!

Cons: Could have been free.

Overall Review: For an aging system this has no downfalls. Should have done this first when going HTPC. This is not a gamer card so don't try to treat it as such ... for pure HD streaming from something like Netflix, this is the answer.

Overall Review: First connected D-Sub VGA could not display at monitor native resolution depite loading current control center driver. Then try DVI and bam everything just worked automatically and the display is much better than onboard vga chip intel 945gm.