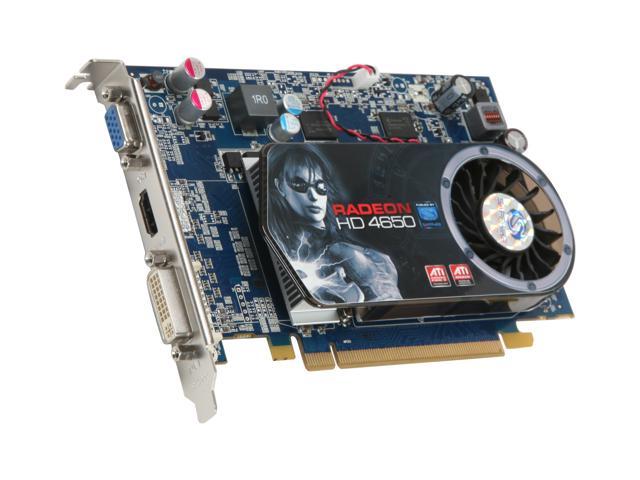 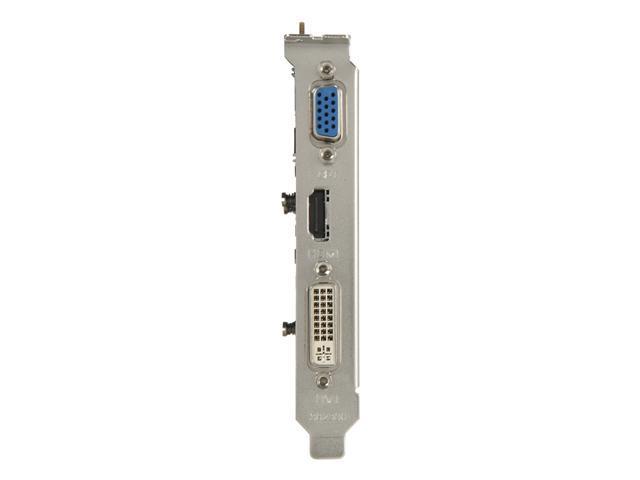 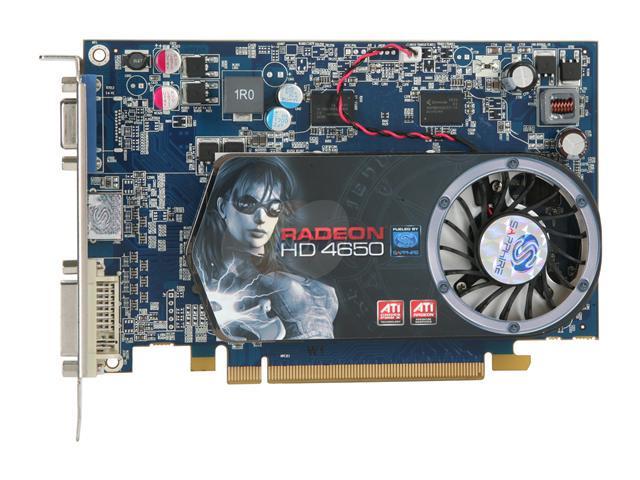 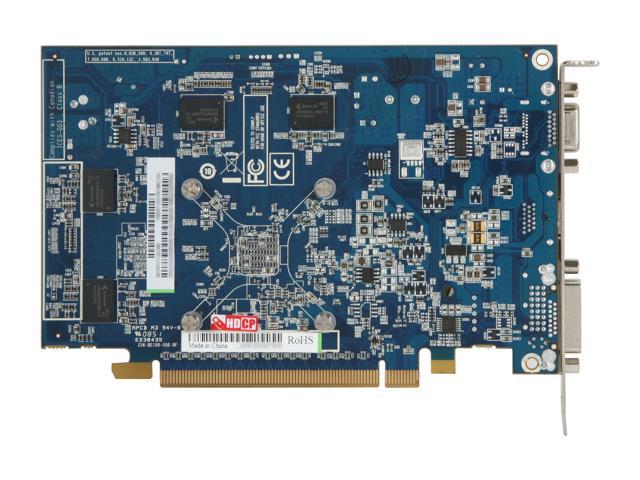 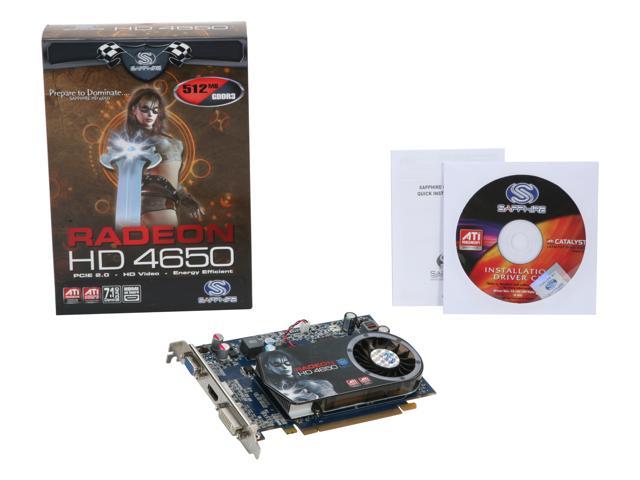 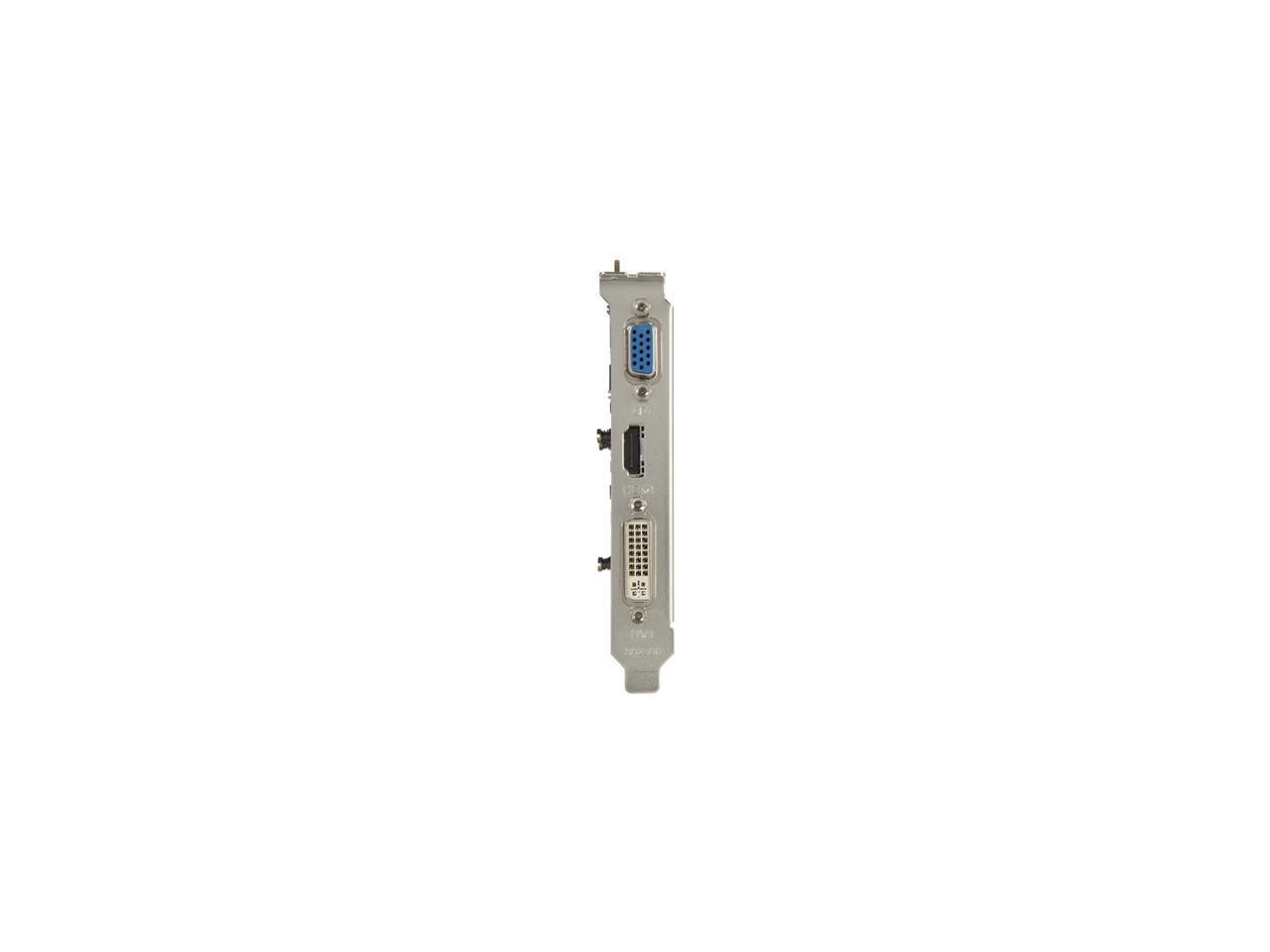 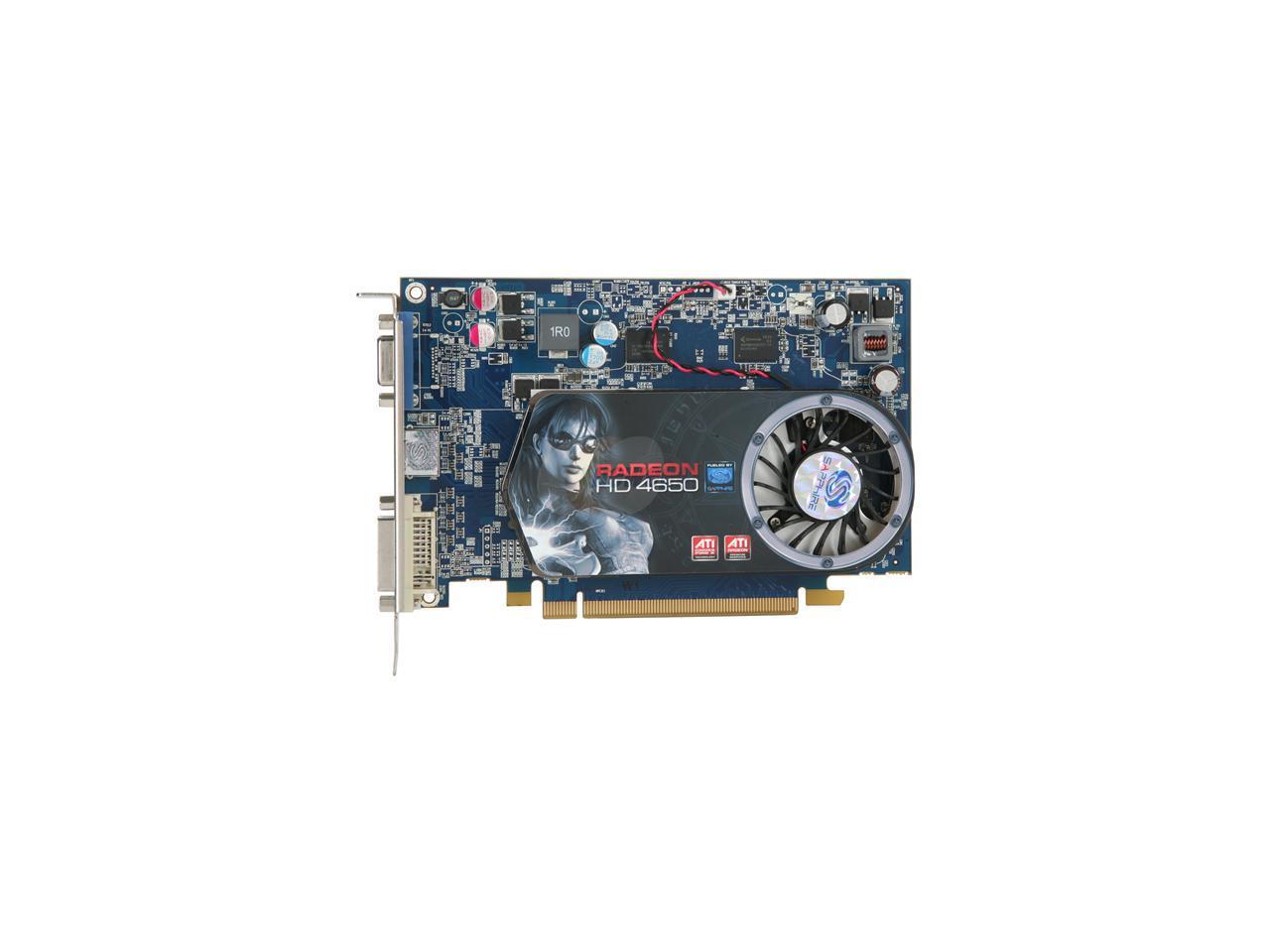 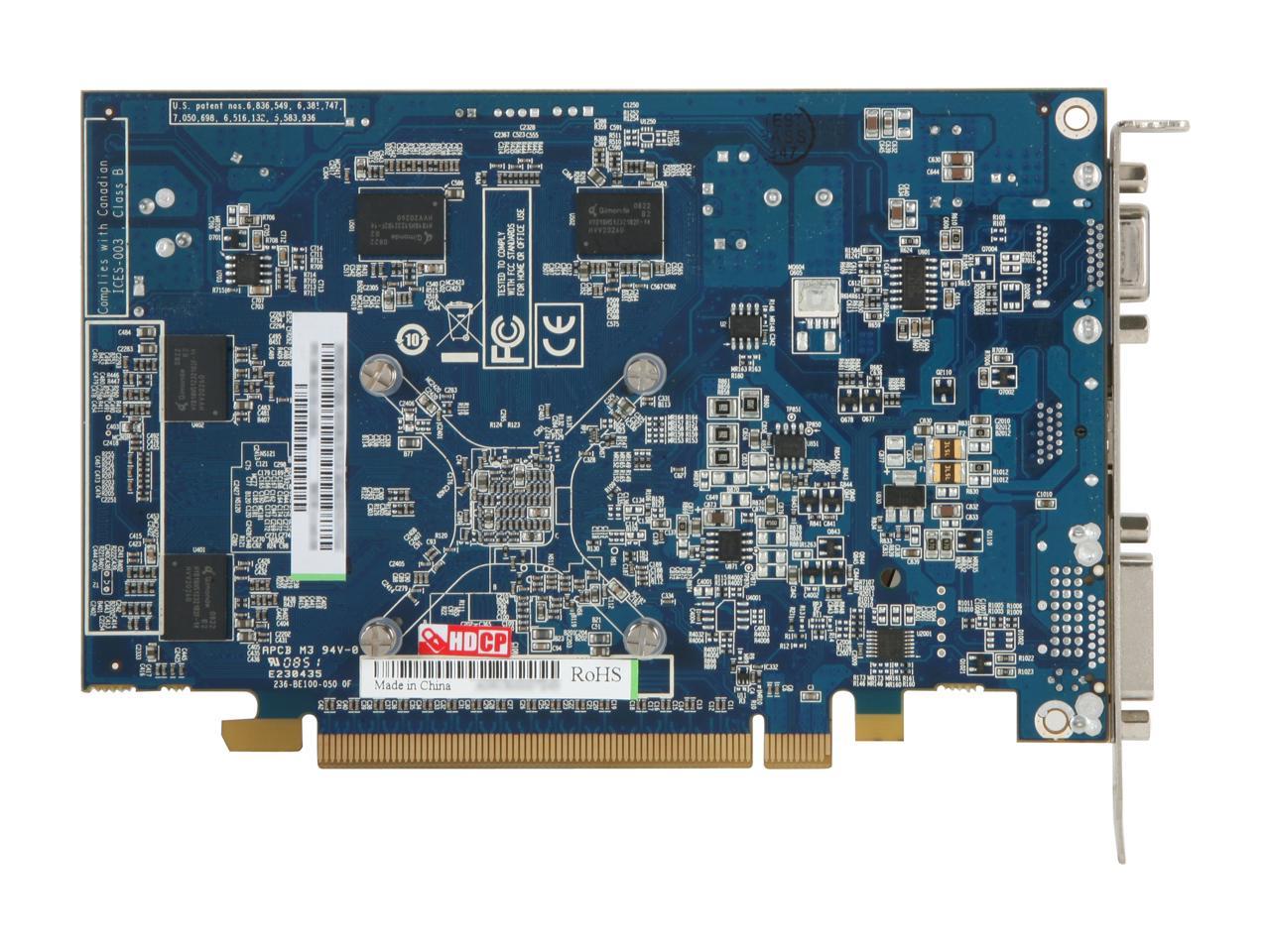 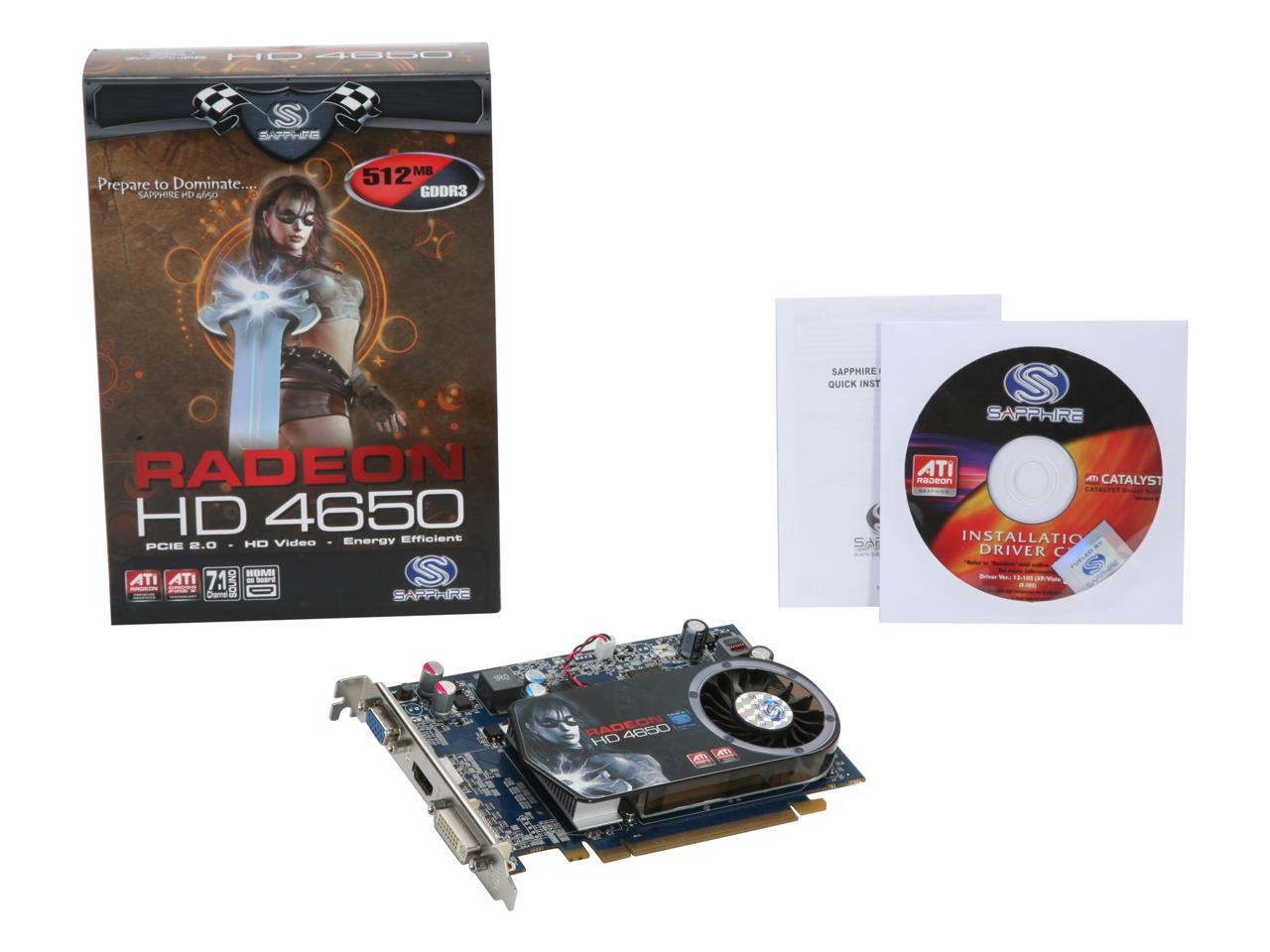 Pros: Small in length, HDMI, VGA and DVI, no extra power needed, and is whisper quiet. Got about 7,000 marks in 3dmark06 @ 1280x1024. 512mb of GDDR3 128bit memory. Nice color reprodution as well. Obviously this card is not meant to be maxing out the latest and greatest titles, but it WILL play them at decent resolutions at medium/low settings.

Cons: Would have been nice to see some accessories in the box, but at this price you can't really complain.

Overall Review: Nice card for a HTPC, or even a low end budget gamer.

Cons: It is very loud while doing any gaming.

Overall Review: The loudness doesn't bother me as I use headphones while I'm gaming but it may bother others.

Pros: Inexpensive, good value. Fan is quiet enough at desktop and even while gaming (case has fairly good ventilation); even while gaming fan doesn't go above 20-30%. Not the fastest card on the planet, but very solid for $50 (much better than DDR2-based 4650s). Idle/desktop power (at wall) only went up 10-15W vs 780G integrated gfx (AM2+ board).

Cons: If the fan spins up to 50+% (observed via forcing in CCC, haven't observed during gameplay) it is noticeably louder than anything else in my machine. Not obscene, but if you've spent $ on getting a quiet CPU fan, low RPM case fans, etc might be something to consider.

5 out of 5 people found this review helpful. Did you?
Margaret D.
Ownership: 1 week to 1 month
Verified Owner
Great Pricepoint for Decent Performance6/8/2009 5:10:51 AM

Pros: 512MB GDDR3, HDCP Compliant card for the cheap. Runs most of my games at 1440x900 mid-high settings with 50= FPS, others low-mid, such as Crysis, but what can one expect at that resolution for the cheap? Runs fairly cool, uses far less power than the Radeon x1900GT it replaced, and outperforms it by 2-3 times as much. Fan is at 60%, and can't even hear it over the 8cm exhaust fan, or the fan on the processor heatsink.

Overall Review: I've gotten a bit paranoid of heat, as that's what killed my older Radeon, so I've got a high-powered 22cm metal bladed fan blowing into the case whenever I'm gaming. Side panel is off, and PCI blanks are removed. I never once seen the GPU heat go past 28c, even after multi-hour gaming sessions.

Pros: On a system with a decent processor, This allows you to pretty much play any game you want. Your not going to be setting FPS or quality records, but who cares? It's just as fast as my old HD 3870 for only 50 bucks! And you don't need to upgrade to a high end power supply to do it either!

Cons: Not alot of extras with it, but who cares? 50 bucks!

Overall Review: Really a great deal. If you wanna game, but don't have much cash, this should allow even an older system to play games decently. It's for all general purposes an HD 3850/70

Pros: Well well well.. ATI managed to convince me that their stuff wasn't all junk. I am seriously impressed by this card. Looks great, runs great. It is -not- loud at all. Maybe if your case is paper thin.. I can hear my hard drive over the fan, and my case is approx 18" from my right ear, at the same height...

Cons: Not really a con for the card itself: ATI's Control Center is a pain to navigate for an old nvidia-head like myself, but I suppose I'll get used to it.

Overall Review: ATI made a believer out of me, with this card. Half the price of a nvidia card with similar performance... My next upgrade will likely be another Radeon. (And I've used nvidia -only- for about 5 yrs)

Pros: Received the card a few days ago and it works great. With my rubbish power supply, 250 watts, this thing is able to run normally. I can play cod4 and WoW on medium/high settings at 1024 x 768 which is all I need.