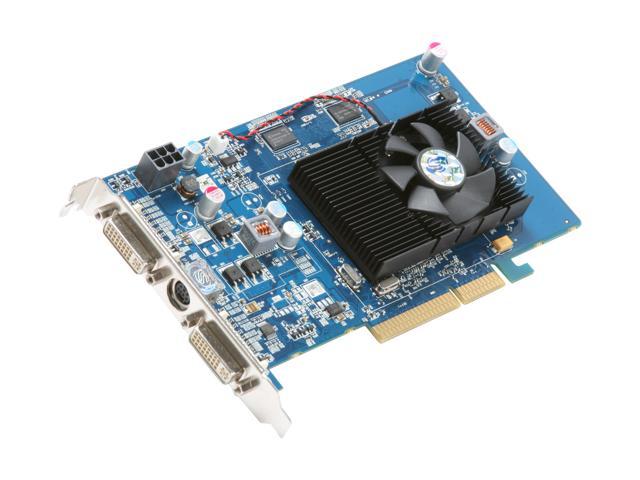 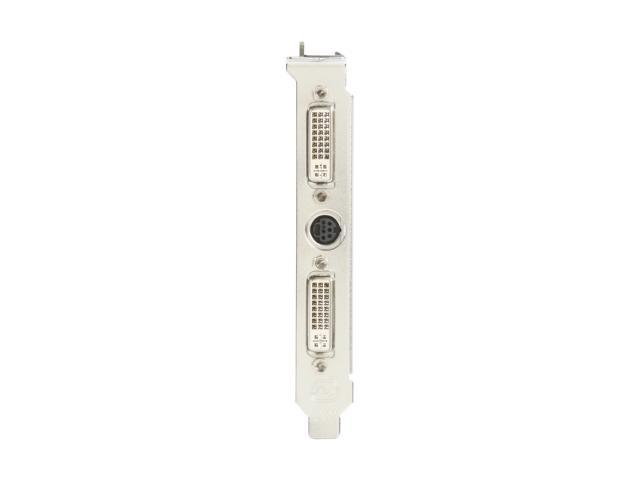 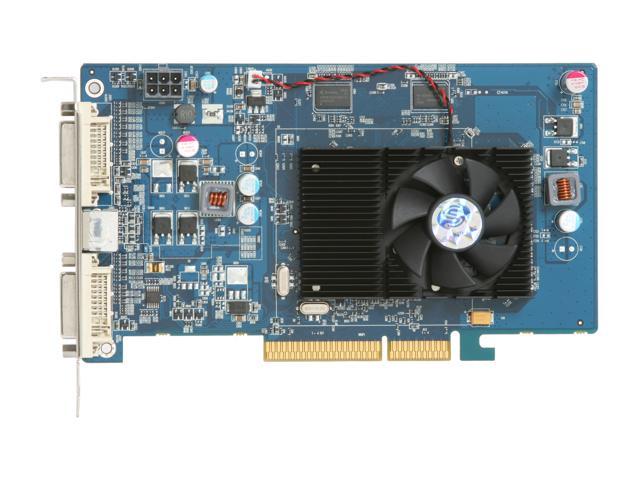 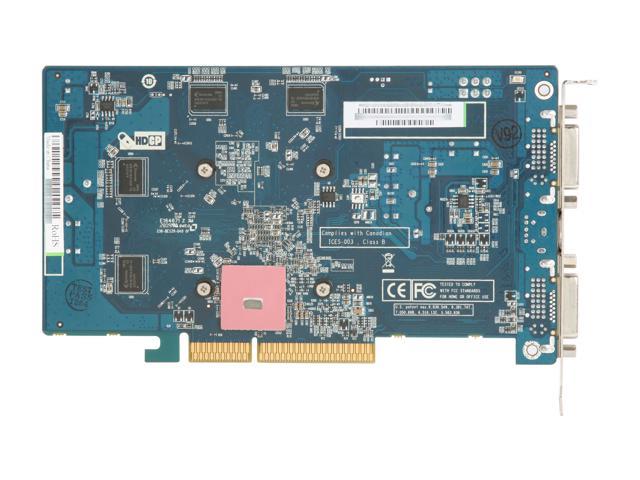 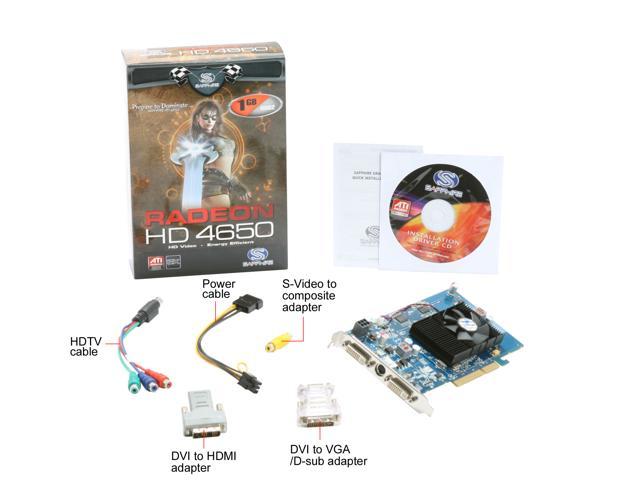 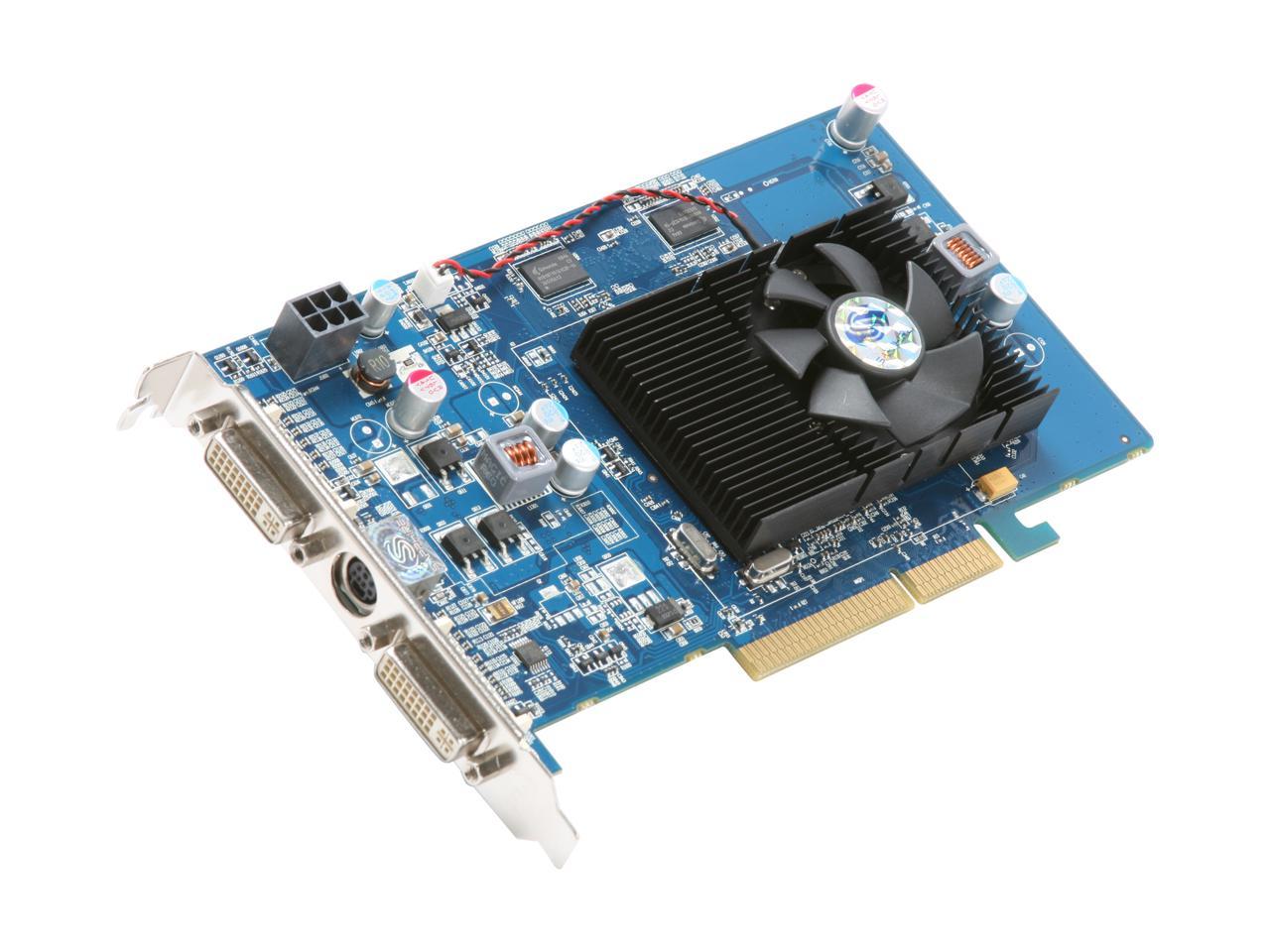 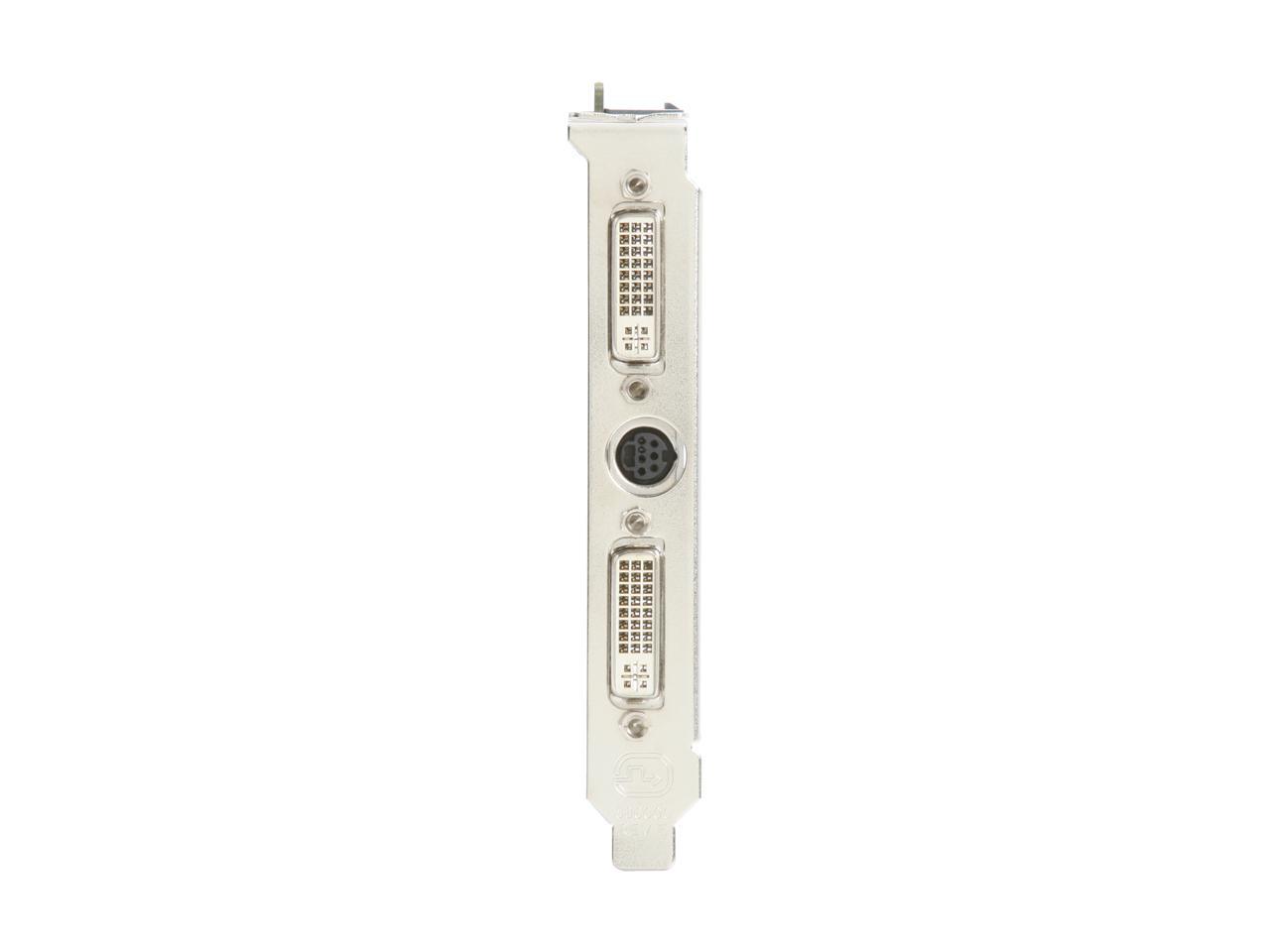 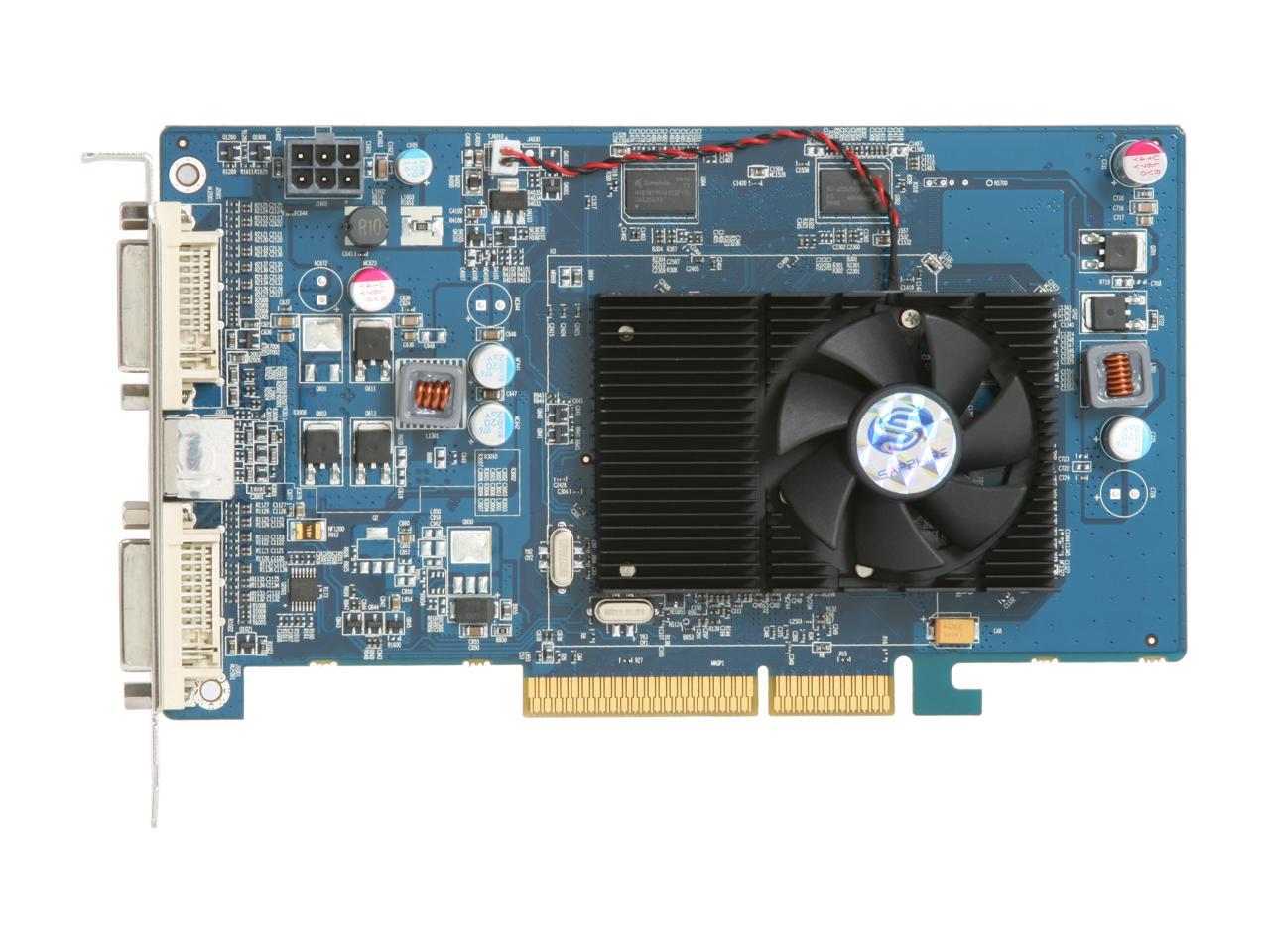 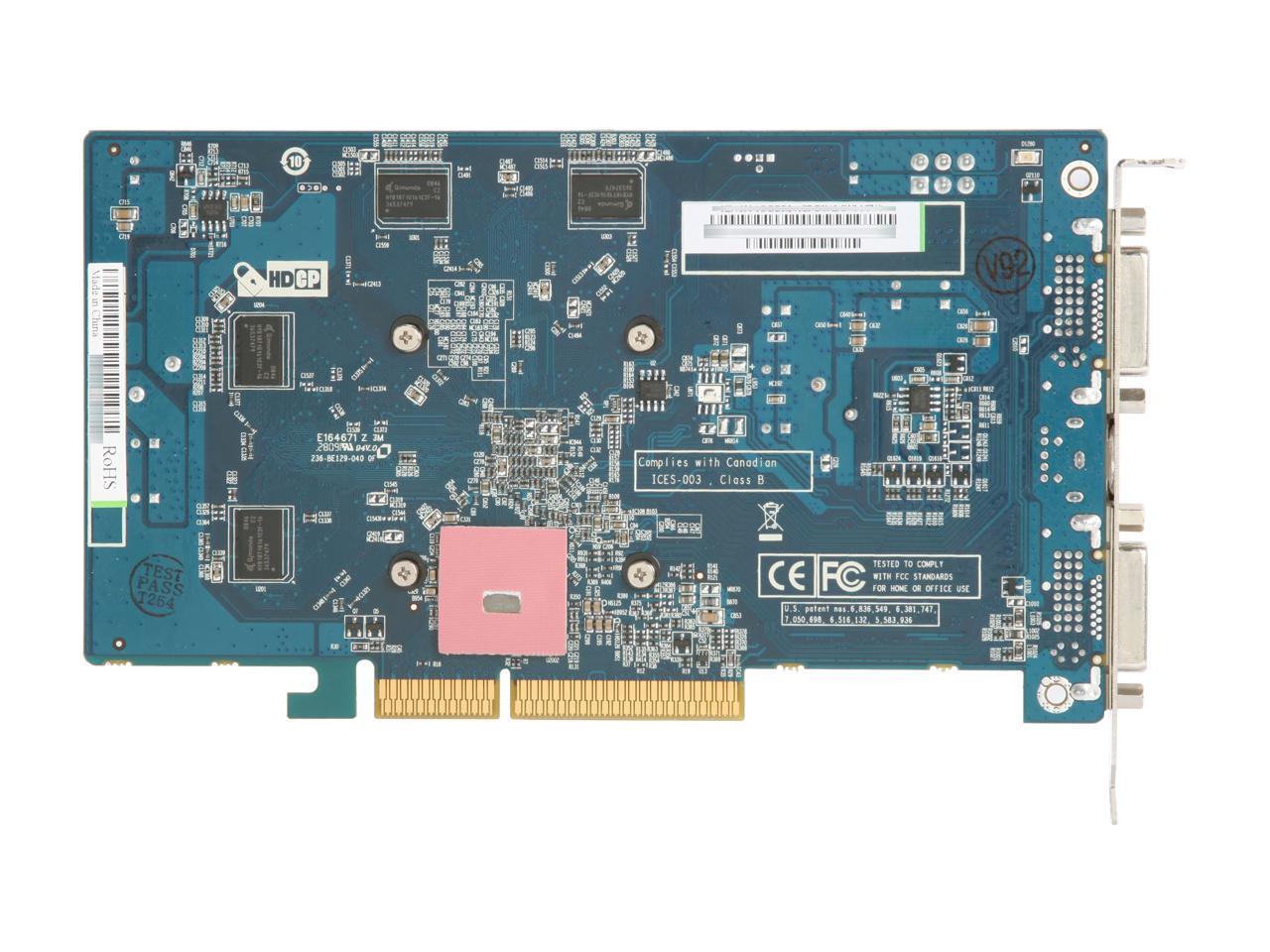 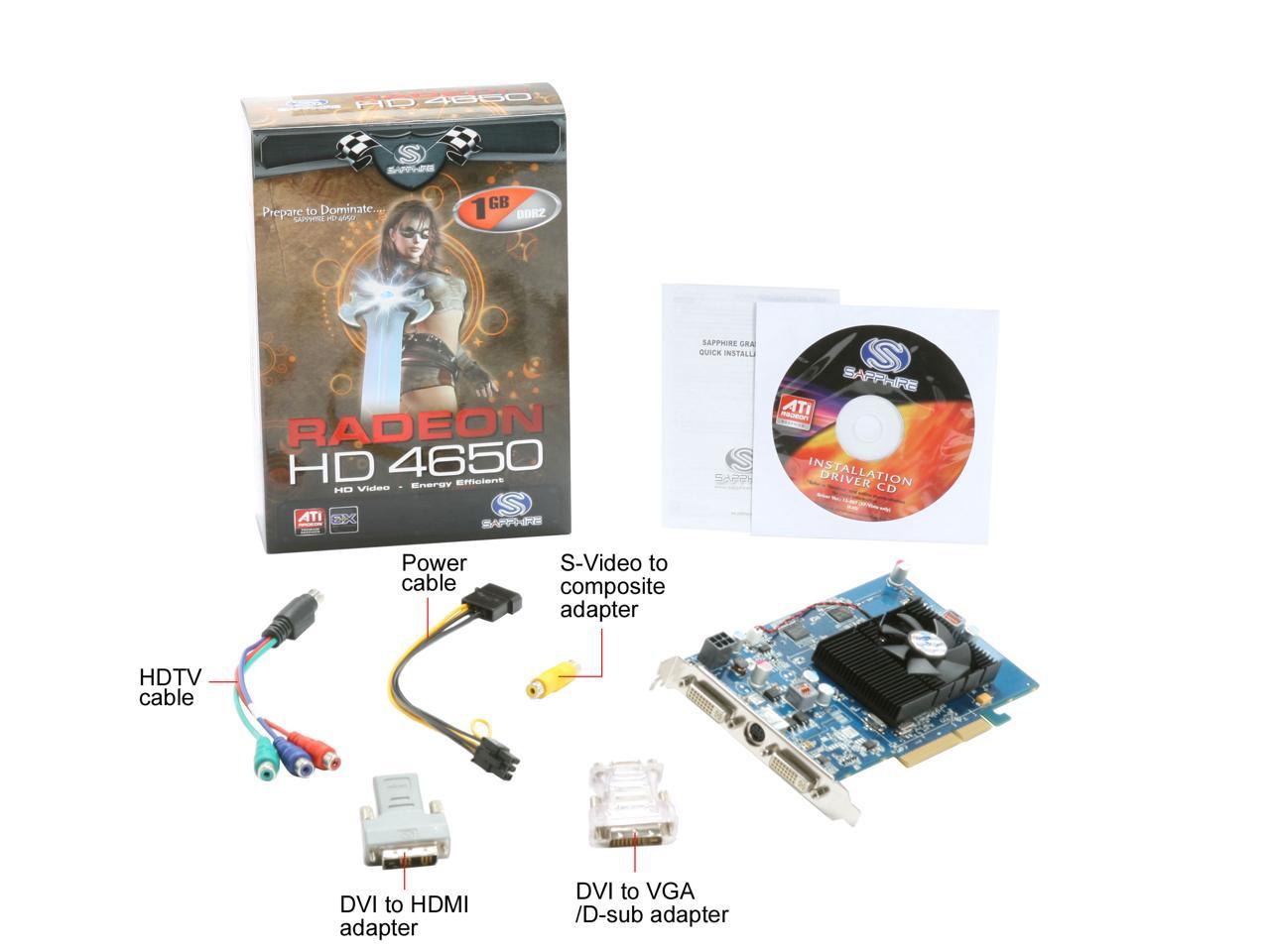 (44) Write a Review
OUT OF STOCK.
Specs
Reviews

Pros: ***** This card replaced a Radeon 9800Pro in a Dell 8300 (I didn't upgrade the PSU),...after doing a bit of researching, the 4650 would actually draw less power than the 9800Pro,..order placed! The main reason I went with Sapphire is because I'v had good luck with them in the past & they have sorted Catalyst 9.8 AGP drivers. The install went fine (the 6pin is in a ridiculous place, double check your system to see if it'll fit). No problems with drivers or CCC to overclock, (currently running the 615mhz core ~ 540mhz DDR2) After testing, I backed the core down and upped the RAM OC,..this gave better results for higher quality settings. To heavily OC the core on an AGP card will just give you extra heat...... I have a 120mm Yate Loon fan blowing down on the card to add cooling. Giving it 5 eggs because this has been a super fun project without issues,....keep that AGP system runnin'

Overall Review: ~ The efficiency in modern chips will give people the ability to upgrade to a card like this (I didn't need a new PSU) The Sapphire 4650 AGP consumes less power than my 9800Pro, while 3X the performance!! Sapphire Catalyst 9.8 AGP http://www.sapphiretech.com/presentation/downloads/download_index.aspx?psn=0006

Cons: Power plug placement is odd. It interferes with any other PCI card with some height. Would be real problem if you didn't have free slots to move card down one.

Pros: Don't be afraid of upgrading. Just trash the CD. Go to ATI and download latest AGP Hot fix for Windows XP if you are still using XP. Real smooth install. Don't have any games just office type 2003+ apps plus some photo software. No problems what so ever.

Cons: ATI's web site for Catalyst package with drivers. Just pay attention. Download the HOT fix package for this card. Can't give any advice for Vista or Win 7.

Overall Review: Upgraded from Sapphire X1650 card which worked just fine. Did this just to see if it would work on old Abit KD7-RAID mobo with solid state caps, AMD Athlon XP 3000+ CPU w\3 GB RAM, 6 X 250 GB Maxtor HD's, 4+1 USB card, 2 Lite-On Optical drives, floppy w\card reader, HTO Striker 7.1 sound card, 52n1 addition card reader, Leadtech PCI TV\FM card, Samsung 960BF monitor, plus a bunch of external USB devices. Win XP w\SP3 with all updates. This is the last hardware update for this old system as I've maxed it out. May not have current software that will really test this card but even with old stuff some things are liitle smoother especially TV card when moving window across desktop. Also, card appears to use less power and runs cooler and fan so far is quiet. I agree with comments that it's a little expensive but that's a personal choice for old systems. Realize this video card is overkill for my needs but hey I got it to work with no problems. Newegg rocks!

Cons: I tried to install the latest HotFix first and got BSOD on restarts. It was "IRQL_NOT_LESS_OR_EQUAL". And if it wasn’t that one, it was a BSOD STOP on "ati2mtag.sys" – a file installed with the HotFix. I spent two days trying different BIOS / Install combination, do some on-line research, then more different configurations. But always BSOD. But one post said he could only get the CD to install the drivers, so I gave it a try and it worked the first time. It's Catalyst version 9.8 with adapter driver date of July 2009, but some files within are actually newer. After all the pain of trying to get the HotFix to work, I'm content where they are now. The 'HotFix' was supposed to support XP, but it may have been more Windows 7 centric. I fought the urge to also upgrade to Win7 during the struggle. Maybe later when I have several days to spare ;^) For Dell 4600 owners like me, unless you truly know how to get a recent 'HotFix' update to work, stick to using the included CD.

Overall Review: I previously tried to use a Radeon HD 3650 AGP card with no luck - it would shut down the system before boot, and if I got it to complete a boot, there was no signal to the monitor. Nothing I tried would work. Very frustrating. I already had DVI/digital monitors, so no conversion to VGA. And I also maxed out the RAM to 4 GB, and bought an Ultra 550 Watt PSU. Sapphire recommends 400 watts, and the card requires a PCI-E power source (hence the included cable). But the Ultra had PCI-E connectors, so that worked nicely. All told, I spent $245 upgrade for each Dell. I priced MOBO/CPU upgrades and bargain kits, but this was the best value under my circumstances. I recommend it for Dell 4600i owners.... just use the included CD. And the time the system takes to boot is a little longer, but overall performance for everything is mucho mucho better. The only BIOS changes I made were AGP Aperture is now set to 256 MB, and Primary Video Controller is AGP (vice Auto).

Pros: This card worked fine in my ASUS P4P800 motherboard and on Windows 2003. I needed a dual DVI AGP card for my KVM switch and this worked great

Cons: I contacted Sapphire support and they told me this: ATI does not offer driver for this card in 2003 server OS. I still bought the card and even the ATI installer installed the XP drivers on 2003.

Overall Review: Gave only 4 eggs because of the lack of support from manufacturer

Pros: Relatively inexpensive way to keep your AGP machine relevant. A great find! -DirectX 10 and Shader Model 4.0 support make a huge difference for older machines. These are two factors that often make newer games unplayable, period, on old video cards. - Narrow profile; only takes up one slot. Card is not too tall or long; should fit comfortably in most cases. - Low power consumption and does not generate a ton of extra heat. - Comes with 6-pin to molex power adapter -- really helps if you have an old power supply with no PCIe power cables - Has DVI output only, but comes with VGA-to-DVI adapter included. They really thought of people with old systems when they put this card out.

Cons: Getting the drivers installed was an absolute circus of one software problem after another. The drivers on the CD did not work out of the box, failing to recognize the card -- and it took several tries and downloads of different driver versions before something worked. I don't think this was all the manufacturer's fault ... more like a lot of older machines are just cranky about recognizing new hardware. As long as you know that going in and you're prepared for the possibility that you may have to spend an evening or two fighting with it, you'll be happy with the end results. Took off one egg here because although it eventually worked fine, a little better documentation would have been nice, given all the possible issues that can happen. Also noticed the 6-pin power connection was in a weird place, basically on the wrong side of the card. Wasn't an issue for me, but double-check that nothing will be in the way on your machine.

Overall Review: Specs recommend a 400W power supply, but this card has been running just fine on a 350W unit in my Pentium 4 system. It really sips the power. Was a little worried about heat because it has a tiny fan and my case has so-so ventilation, but it hasn't been a problem at all. Installed a Thermaltake Smart Case Fan adjustable up to 70 CFM just in case I needed better cooling, but I haven't had to turn it up even close to full power.

Pros: Brought a Dell Dimension 8300 back from the brink of death. I can easily play modern games on high settings with no hiccups. Didn't need to upgrade the 305W power supply either. No driver issues on XP, but that's all I've tried.

Pros: This is in an older system (specs below). I was running a BFG Geforce 5200 Ultra. It ran World of Warcraft with low - fair settings reliably, but wouldn't run newer games at all (Steam type games like Left 4 Dead 2, Team Fortress 2). Now I'm able to turn the settings in all of these games, WoW included, up to high.

Cons: A little pricey but now I'm able to have a "spare" computer for when people come over to LAN/WAN.