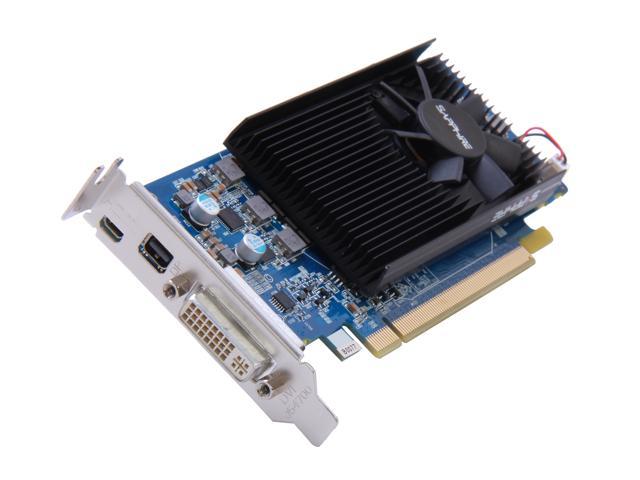 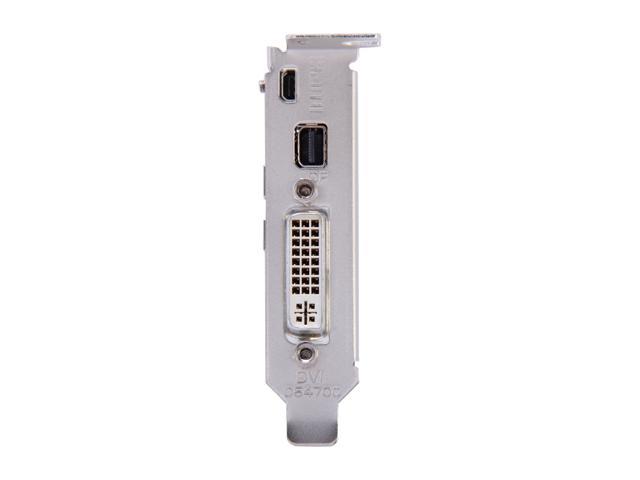 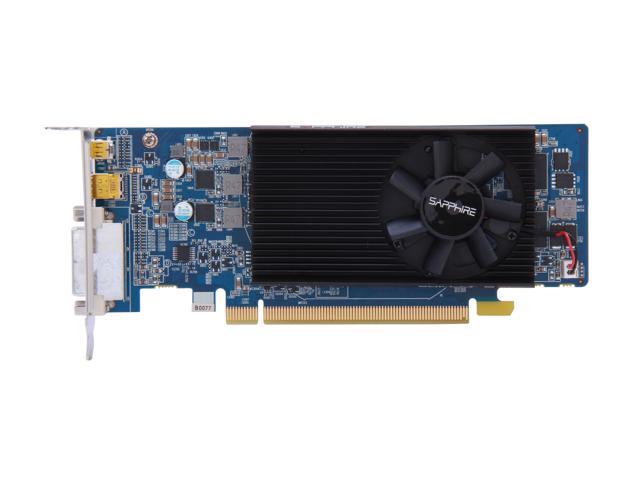 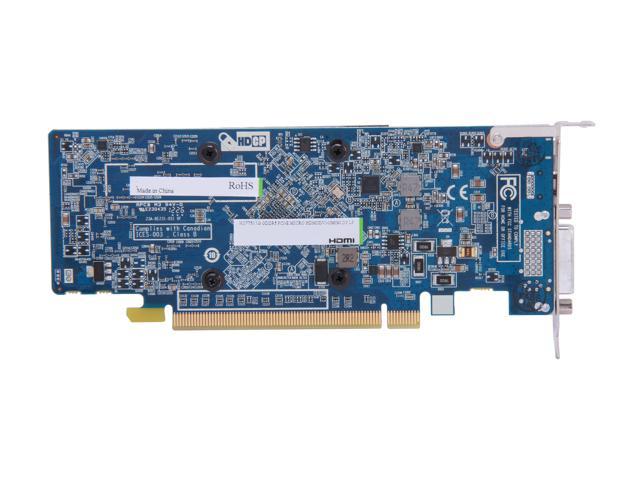 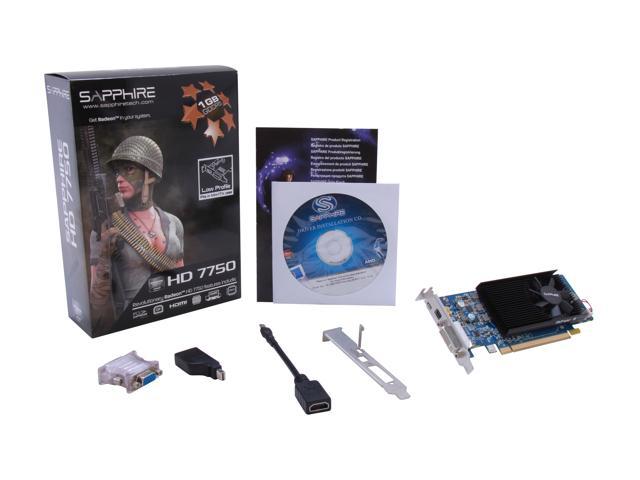 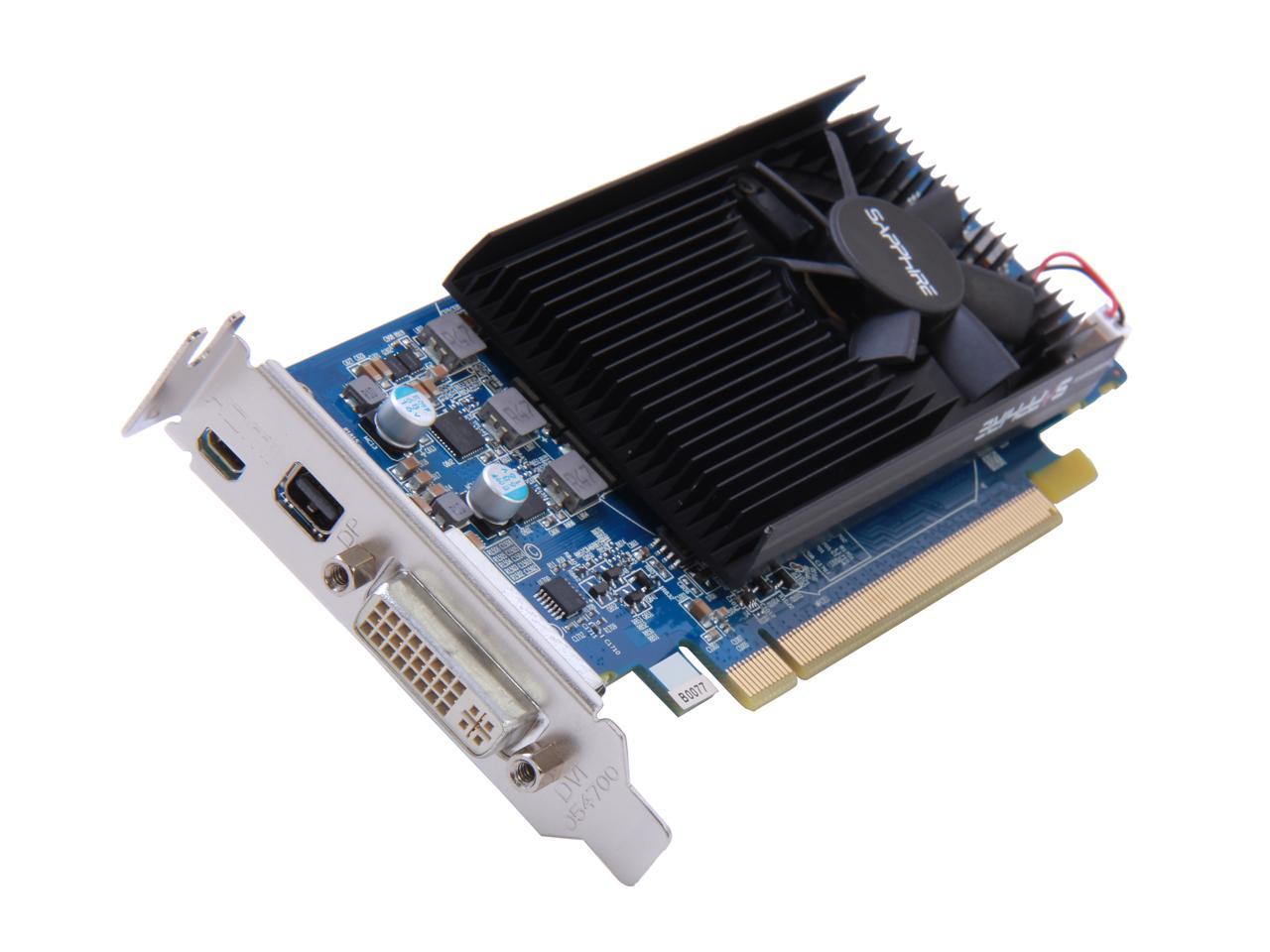 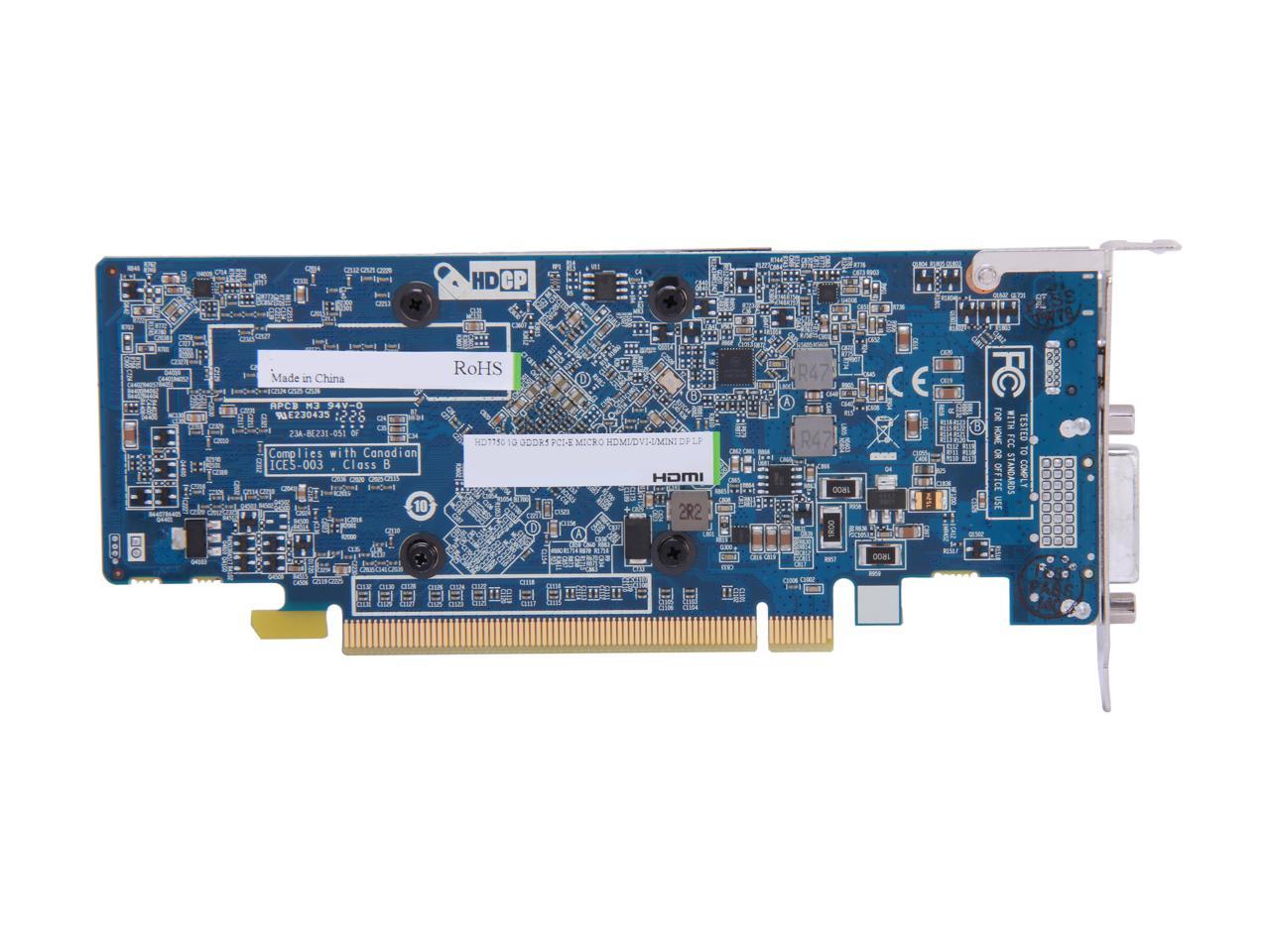 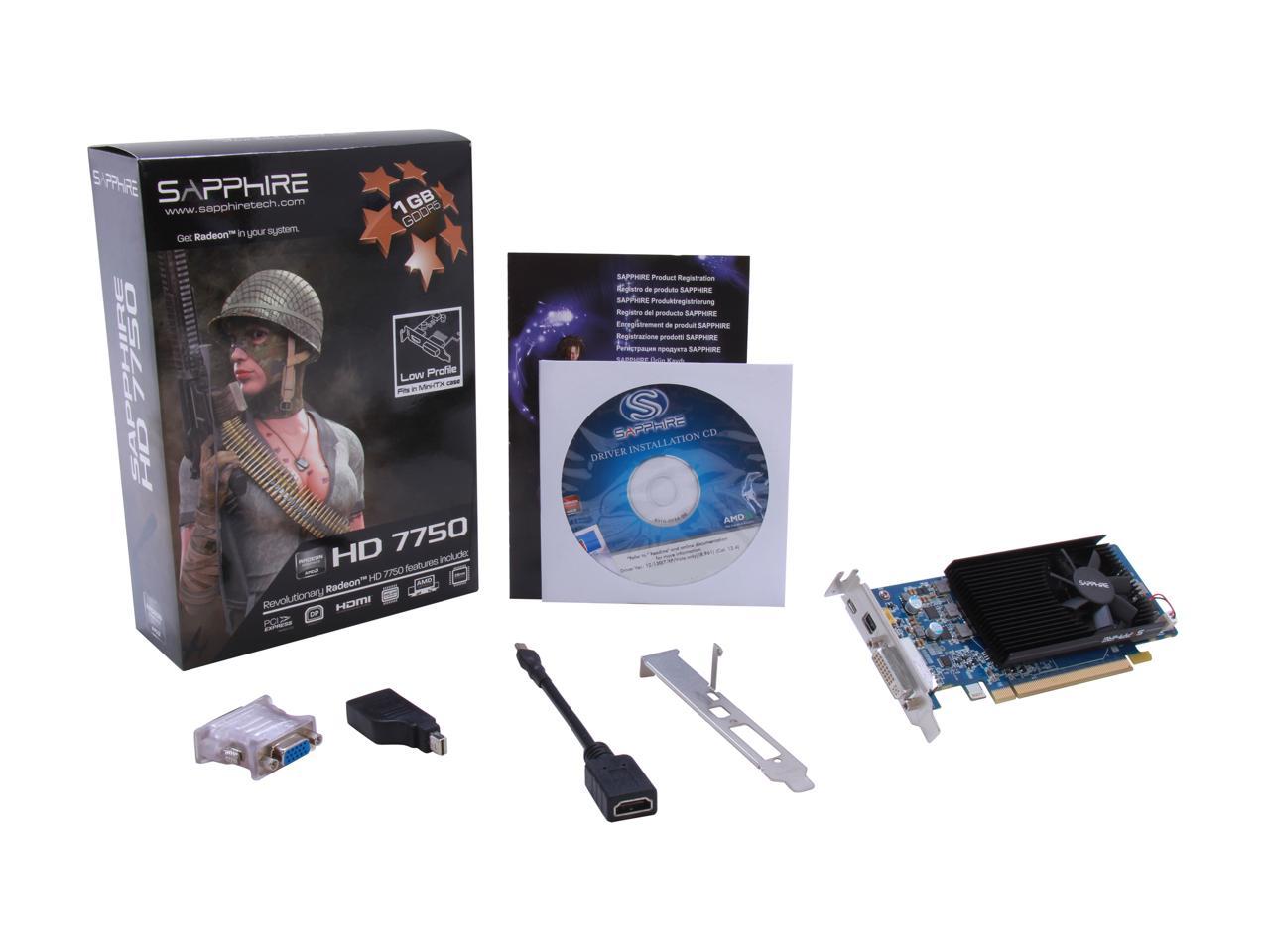 (83) Write a Review
OUT OF STOCK.
Overview
Specs
Reviews

The SAPPHIRE HD 7750 1GB low profile model is based on the highly acclaimed Graphics Core Next architecture from AMD, and retains all the features of the HD 7700 series but in a truly low profile format. Many low profile cards use a cooler that is actually larger than the PCB format, and cannot be used in slimline cases. The SAPPHIRE solution uses a specially developed single slot cooler with an efficient ball bearing fan and heatsink design that truly follows the low profile format. This makes it ideally suited to applications like HTPCs or installation in even the slimmest styles of mini-ITX cases.

Performance is the same as other implementations of the HD 7750, with core clock speed of 800MHz and 1GB of GDDR5 memory clocked at 4500MHz (effective). Output configuration is very flexible, including multi-monitor support for AMD Eyefinity. Its Dual-Link DVI-I, HDMI and Displayport outputs are all mounted within the low-profile backplate. This has been achieved by the use of mini-DP and micro HDMI sockets. A set of Mini-DP to DP, micro-HDMI to HDMI, and DVI-I to VGA adapters are all supplied with the card, as well as both low profile and standard height backplates.

Pros: If you are looking at this card, then you are in the market for a half-height, single slot, low power card that can play games with decent frame rates. At this time, it is the fastest card on the market that meets that criteria. This card benchmarks faster than the 9800GTX+ I was using less than two years ago. Amazing. To make it even better, it requires very little power and it gets it all through the PCIe port. I have it installed in an Antec ISK 310-150 ITX case. Yes, I am running the entire system including this card on a 150W power supply without any issues. Even better, the fan is very quiet. It does spin up to full speed when you first power up, but it slows down shortly after and is nearly inaudible. While gaming, the fan is noticeable, but you don't really notice it over the sounds of the game. During a FurMark run, the card maxed out at 69.0°C.

Cons: The only con I can think of is the mini-HDMI port which requires an adapter (bundled) to use. When you get this small though, there just isn't enough room for a full size HDMI connector.

12 out of 12 people found this review helpful. Did you?
Gentry B.
Ownership: 1 week to 1 month

Overall Review: I was looking for a good card for a small case. My plan was to find something just as powerful but double the VRAM. However I ran across this little beauty on sale. Retail price is fine (I would still recommend it), but a sale price I could not pass up. Current rig: [i7-4770K, 4GB DDR3 1600, HD 7750, 240GB SSD SATA3, 3D-BR drive, IN WIN Mini-ITX case]

Pros: Fit in an old Dell Optiplex 760 with no further upgrades required. Made this a viable gaming machine, playing most games near max settings at very playable frame-rates.

Overall Review: My card overclocks with AMD OverDrive to 930mhz core with no increase in voltage and stock cooling. If you're trying to squeeze some gaming life out of an old machine - this is the card you're looking for.

Pros: I bought 2 of these cards to upgrade my wife's computer and mine so that we could play Guild Wars 2. After installing the card and updating the drivers both computers were delivering a solid 30+ fps with GW2 set to max settings across the board at 1920x1080. Computer Specs: Dell Inspiron 580s slim case with 250w power supply Intel i5-650 3.2GHz 6GB DDR3 memory Sapphire HD 7750 1GB DDR5 low profile card

Overall Review: Even with this card running in a PCIe 2.1 slot it is performing fantastically. Overclocked to 925MHz/1250MHz added an additional 5 fps.

Pros: Quality build. Quiet. I have always had a great experience with Sapphire cards and stick with the brand. Does not require external power. Works fine with lower wattage power supplies.

Cons: The full size 7750 from Sapphire did away with the cooling fan, going instead with cooling tubes and fins. The low profile card has a cooling fan. It is quiet however, even under load.

Overall Review: Another Sapphire card that I think is great. I recommend the brand. You can run this card on slim Dell desktops with 250W / 300W power supplies without issue. The card draws only 55W directly from the PCI-E slot. I am running mine on a slim Dell Inspiron. This card provides only a slight boost in performance over the Radeon HD 6670.

Pros: Easy to install - quiet - fast. Updated drivers from CCC was so so easy!

Overall Review: Installed on my Dell Optiplex 755 sff - Windows 7 Home Premium 64bit - 8gb ddram (crucial) - WDC WD500AAKS. Be sure to change the video BIOS setting from Auto to Onboard/Card or you wil get the dreaded blue screen. Windows Experience index went from 3.1 to 7.4 (wow!)

Overall Review: Needed a dedicated solution for my newest HTPC build. Core of the box was an A10-5800k on an MSI board. On-chip graphics were great, but I wanted more, so I added this card. The difference in performance was not so big on benchmarks, but noticeable in actual use. Now my HTPC box will stream ANYTHING without a hiccup or pause, it will play BD-R natively at 1080p with the CPU and RAM barely over idle, and the loudest part of the system is the ODD and PSU fan (14Db). She games mid-range, and absolutely devours encodes/decodes. For the money, you can't get better.