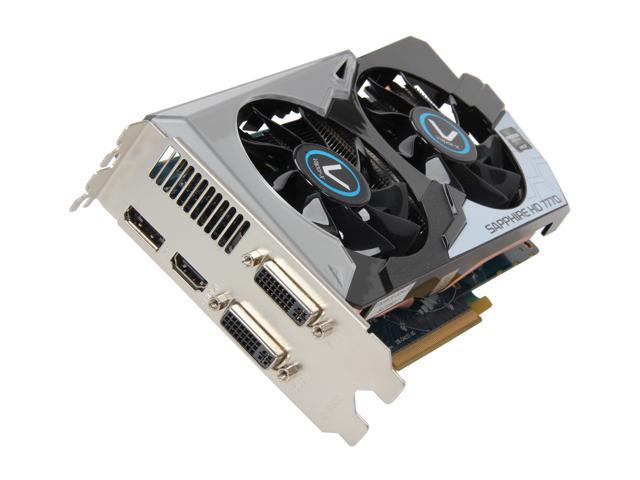 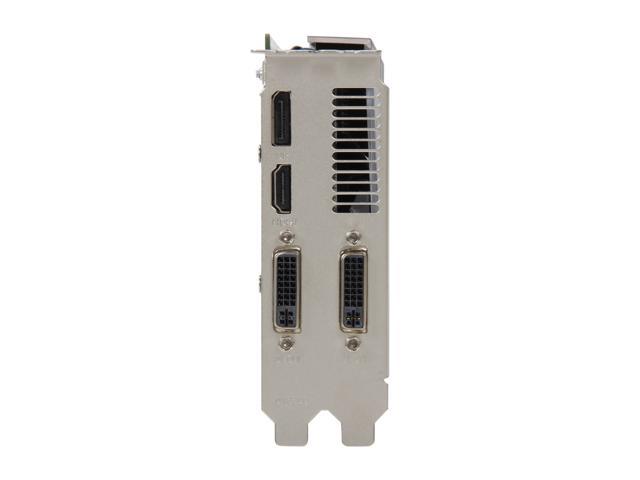 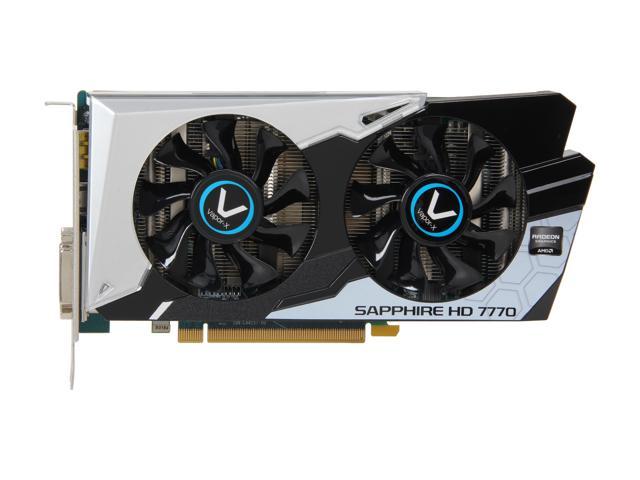 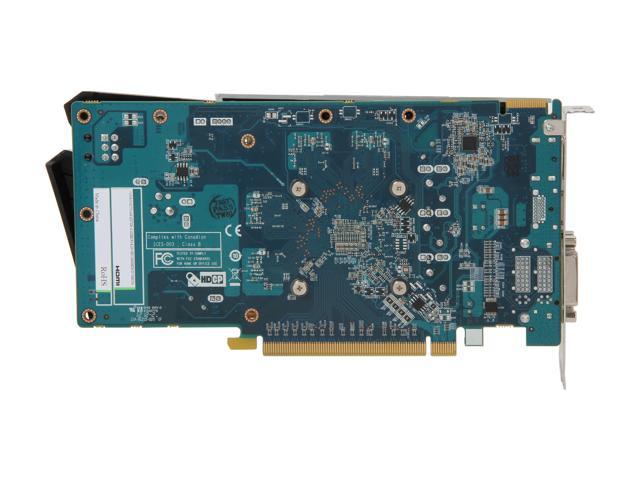 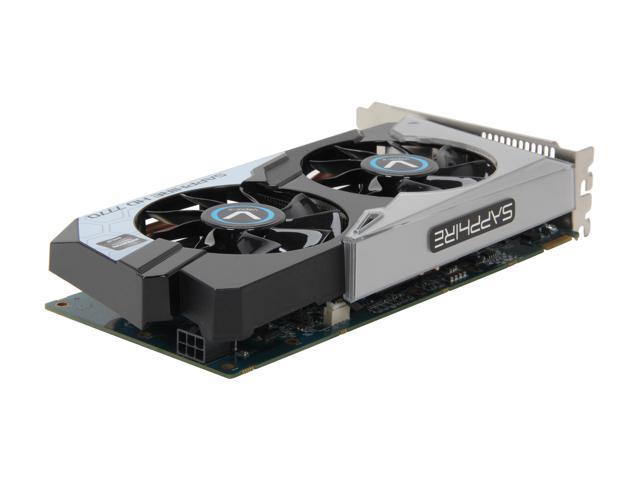 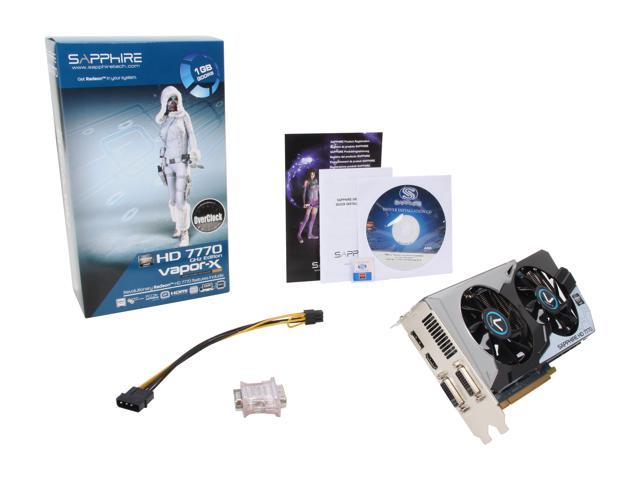 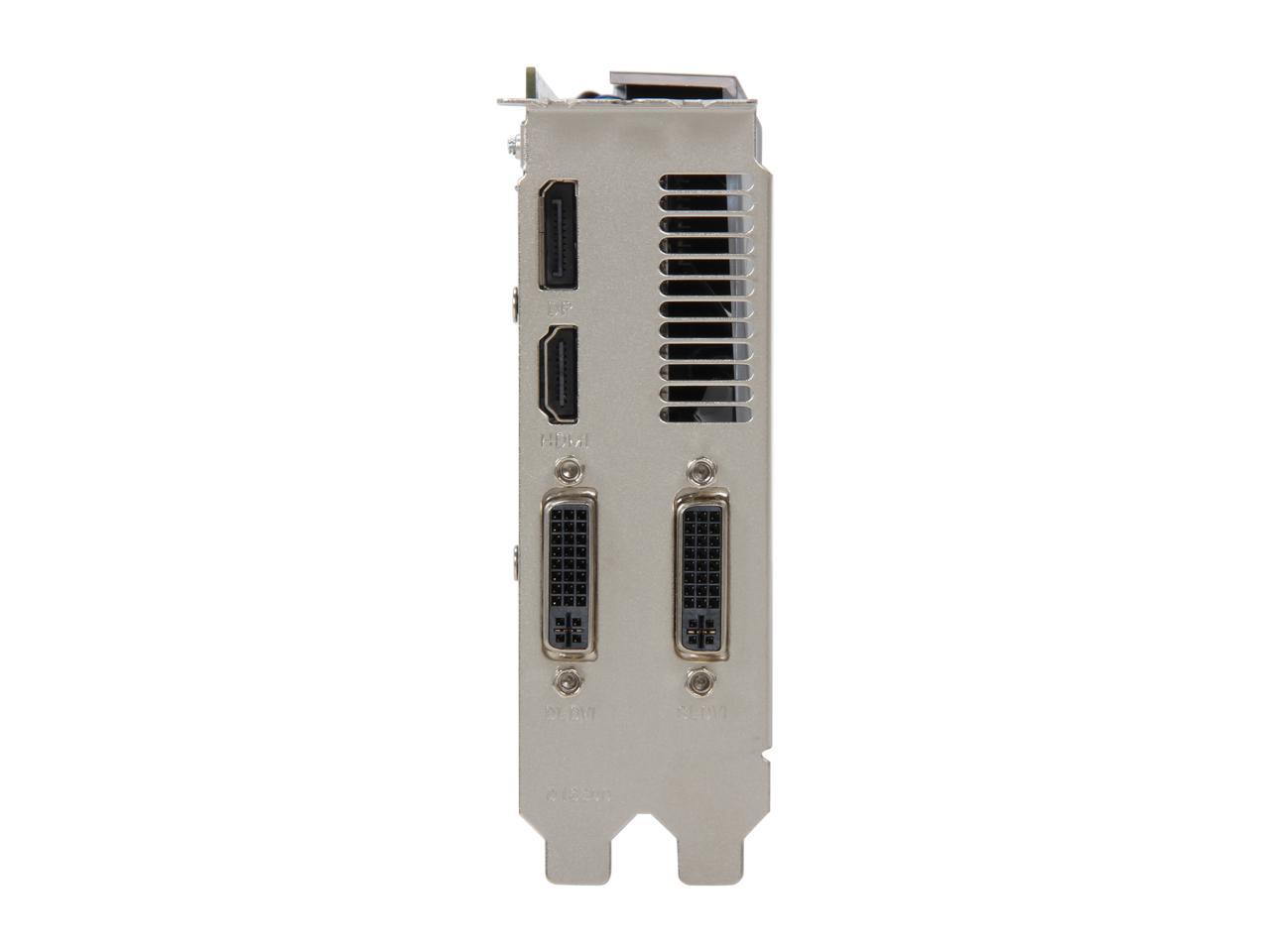 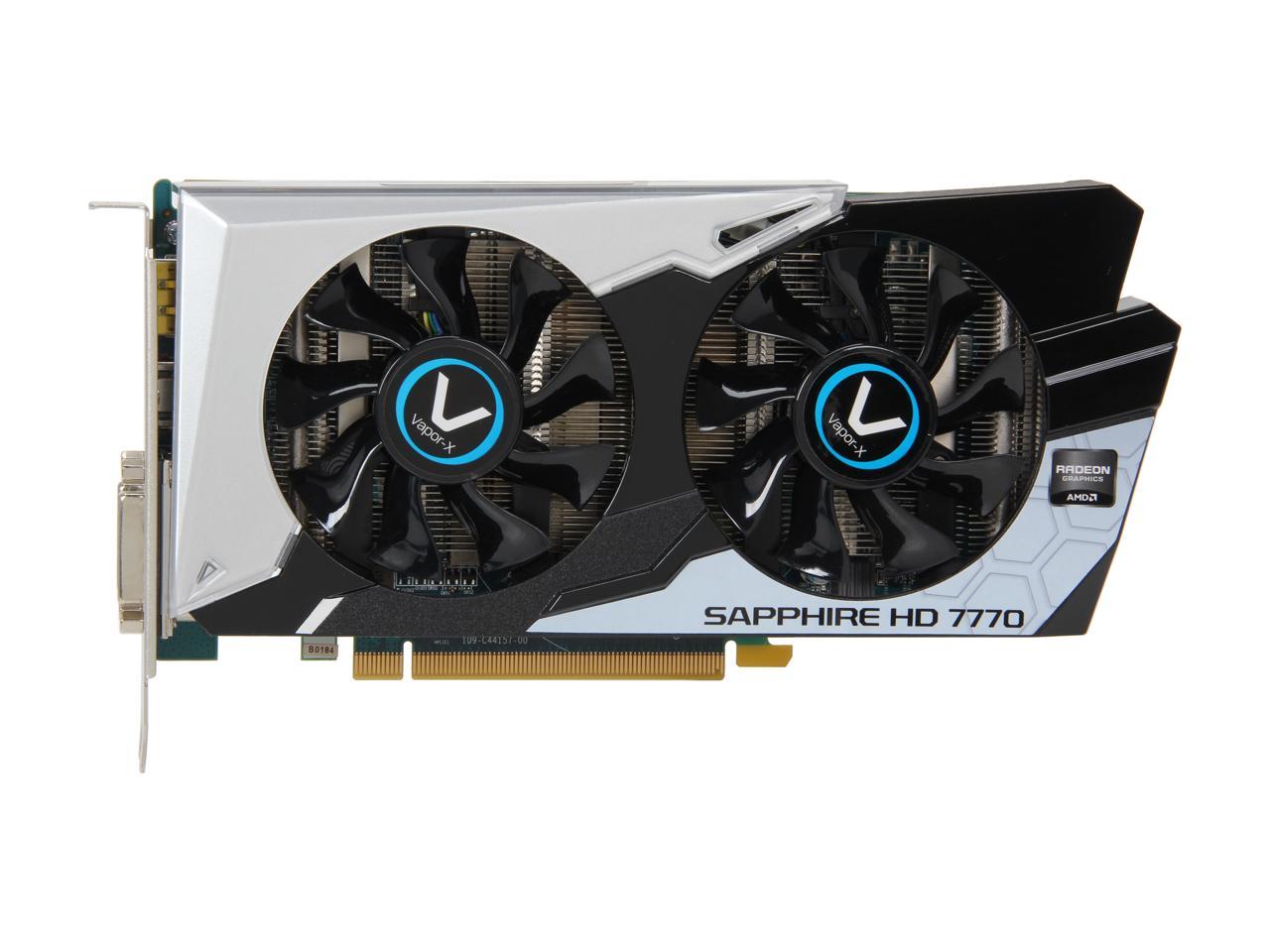 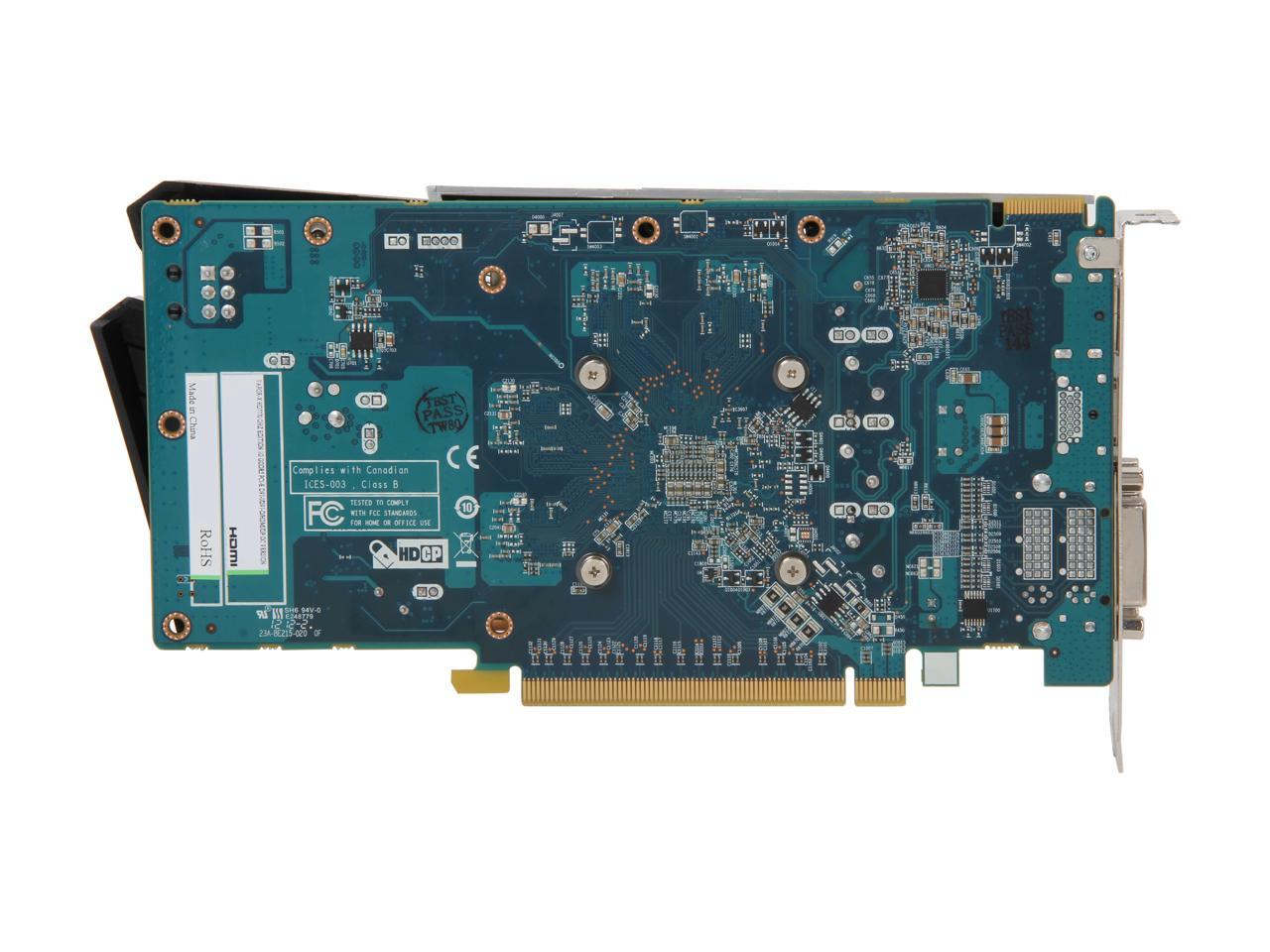 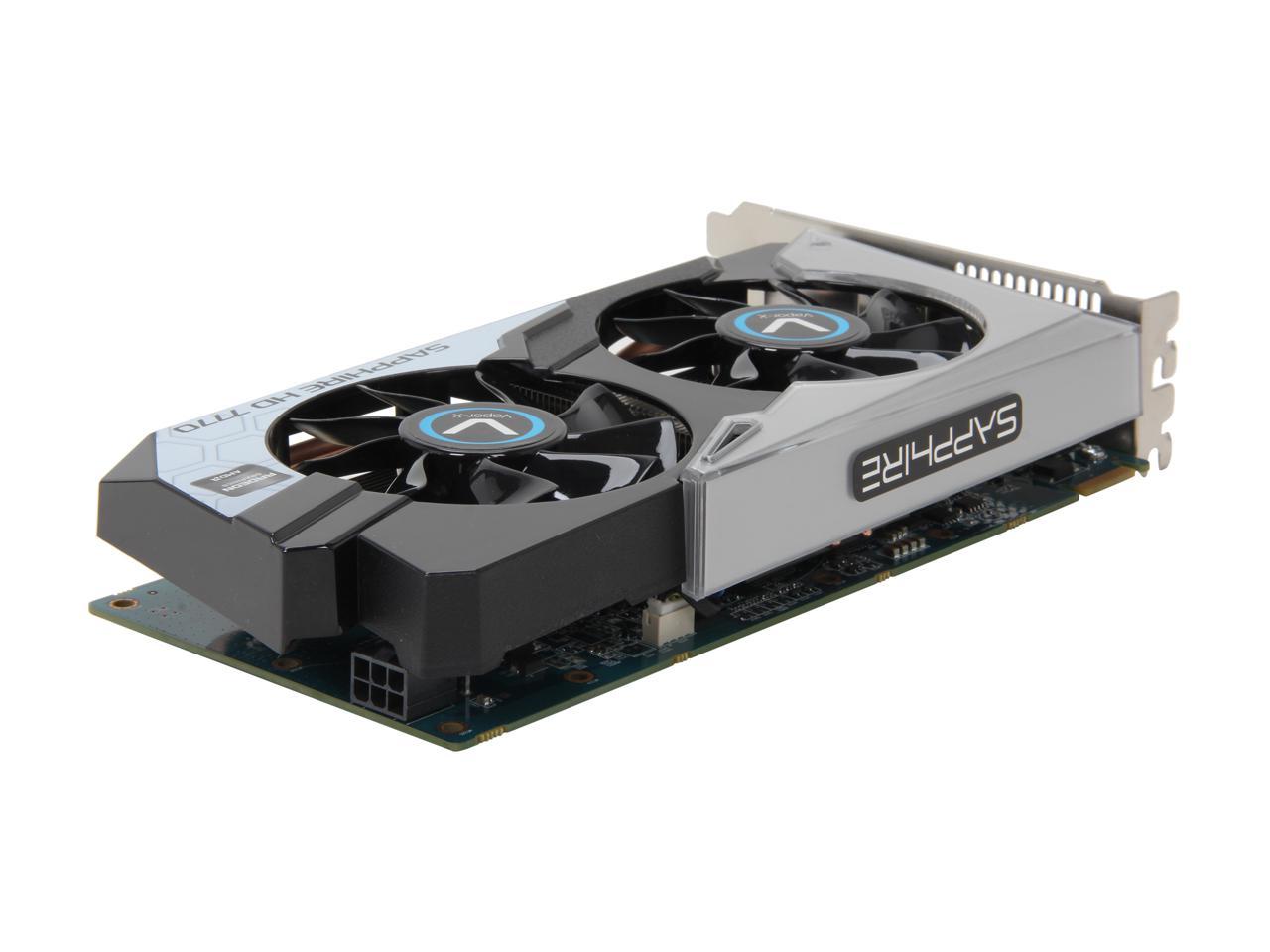 (103) Write a Review
OUT OF STOCK.
LOADING...
Overview
Specs
Reviews

A great blend of performance and value, the SAPPHIRE Vapor-X 100358VXL VGA card brings your gaming experience to a new level in the latest DirectX 11 titles with strikingly realistic visual and environmental interaction. It's based on the cutting-edge 28nm architecture and built around 1024 Stream Processors with 1GB/128-bit GDDR5 memory, and is factory overclocked with core clocks of 1100MHz and memory clocks of 1300MHz (5.2 GB/s effective) to maintain an exemplary performance.

Pros: I went from a 9600GT to this, and I'm pretty happy so far. I managed to snag this just before it sold out again, and for a card that's sold out often, I'm surprised there aren't more reviews. Not only did this card cut down on my power consumption, it also cut back my CPU usage during most games by taking a load off my CPU's shoulders. It's quieter and cooler than my 9600GT too, but roughly twice the power. My games run great (for the most part) and now I have access to DX11 features, which is the biggest reason to upgrade to a new card.

Cons: I HATE that I had to take an egg off, because I am very happy with this purchase; it is a great bang for the buck BUT as others have said: DRIVER ISSUES! I know that it's a very new card and drivers should improve, but there have already been a few instances where this card stutters on games that my 9600GT ran perfectly smoothly, and there is no excuse for that, and I've already had a could Blue Screens of Death, along with some other weird graphics glitches. I really wish I didn't have to take an egg off because once the drivers are fixed this card is great, it's a good investment, but I can't give 5 stars to a product that has caused BSODs on a computer that is otherwise stable and NEVER had a BSOD.

Overall Review: It's a great bang for the buck. I wouldn't spend any more on a graphics card for the power I get out of this thing. If I do need more power later, I'll run two of these in SLI as it's cheaper than a 7870. The 28nm transistors really make it energy efficient and bring down the heat. Despite the driver problems, I still recommend this card over any other, because driver problems can and will be fixed in the somewhat near future, while buying an older card because the drivers have been perfected seems like a decision I would regret. I'll probably be using this card for the next 5 years, so in the long haul it's a good decision.

Pros: Slapped it right into an ASUS Crosshair V Formula, installed drivers and updated, BAM! dual screens. Not taking advantage of EyeFinity, so I won't talk about it. Plays Diablo III no sweat, and many older--but still more modern--games without any issue. Had one blue screen (not 'of death') but that was me fiddling around inside my case like a derp. Price is so good, I'm going to buy another just to Crossfire them. DVI to VGA is nice for older monitors, and works great with no washout. Looks really cool, too bad there are not waterblocks for it though. GHz edition, so it's got faster clock speeds.

Cons: Has been running fantastically for the past month with no other issues than described above. Didn't come with a Crossfire bridge, but that's obvious from the pictures. DUR. I got 2 with my Mobo, so meh.

Overall Review: Purchased 8/3/12, received the next Tuesday. Speedy delivery as usual from Newegg. RATE THE PRODUCT, not your customer service experience or shipping experience.

Pros: Very, VERY, clean and epic looking card. My jaw was on the floor as I unboxed it and installed it into my computer. Threw it into my rig and install the drivers. Immediately started up Skyrim, ultra settings, Constant 60 frames. I was blow away, my previous card being an MSI Radeon HD 5570. I just installed my card about 10 hours ago and i've been gaming non-stop since then. All I can say is: I am satisfied beyond what I was expecting. Sapphire will find themselves getting money from my direction for years to come.

Cons: After about an hour of playing Battlefield 3 at Ultra settings on a hot summer day, the fan was so loud and annoying I had to put my headset on.

Overall Review: I would recommend this card to anyone looking for a card that is in the $150 range and wants a quality experience. You get the best experience for your money with this card.

Cons: not a 7870 or above card somewhat large (may cover SATA ports on older m-atx boards)

Overall Review: Overall a great budget friendly and power friendly card. Runs the RE5 demo benchmark (variable benchmark) on max settings DX9 with resolution at 1152x864@85hz (CRT) at an average of 144 fps on windows 7 x64. Runs CS:GO at the same resolution setting with max settings otherwise (minus full screen MSAA) at ~250 fps online.

Pros: The HD 7770 Vapor X is the elite of the 7770 series. It is also overclocked by the factory. This card runs very cool, and quiet under full load. It handles games extremely well. Any game developed before 2012 the settings will max out, except for rare circumstances. The Card bears two fans and needs only one PCI-E 6 pin connector. This card also is easy on a Power Supply. A simple 500 watt power supply is all that is needed. As for the comparison between this card and the HD 6850, I would recommend this card. This card is cooler, requires less power, and with new drivers and updates it is on par if not better than the HD 6850. It is also silent. As a bonus they threw in a VGA adapter. This is a steal for 125 US dollars.

Cons: The only minor nitpicks are the size, locked voltage, and drivers. The card is somewhat large. Be sure to have a nice control over the cables in your case. The size is not very large, but can pose a problem to smaller cases. The biggest con is the locked voltage. You cannot overclocked the card. This is not a large problem due to the card being overclocked by the manufacturer. The drivers can be confusing to beginners. If you can avoid downloading from the disc. Use the drivers from the website. All in all these are very small flaws.

Overall Review: This card is great for beginning system builders. It is cheap, simple, and strong for every modern game. Do not expect this card to be able to display on the maximum resolutions, highest settings on demanding games with 5 monitors going. This card can run eyefinity, and is in the mid end category. This card is exceptional and deserves recognition.

Pros: Can run most games and programs at great rates. Has not crashed, overheated, or anything of the sort in my many hours of high usage tasks. Also stays very quiet even under load.

Cons: None at all so far.

Overall Review: Fantastic card all around. Highly recommend for people getting into building PCs.

Pros: This card performs well. I'm running it in a pci-e 2.0 slot but i haven't seen the fps drop below 40. I play Mw3, hitman: absolution, skyrim, dirt 3, max payne 3, assassins creed 3, arkham city, Bf3, and gta iv all in 1440 x 900 and on max settings with the exception of tessellation and anti aliasing which are set to medium settings. Great card for the price.

Cons: I read about the bsod (blue screen of death) issue with these new ati drivers but i didn't think it would happen to me. lol but it did. It happened once within the first five minutes of installing the drivers and once about 3 weeks later. No problems since.