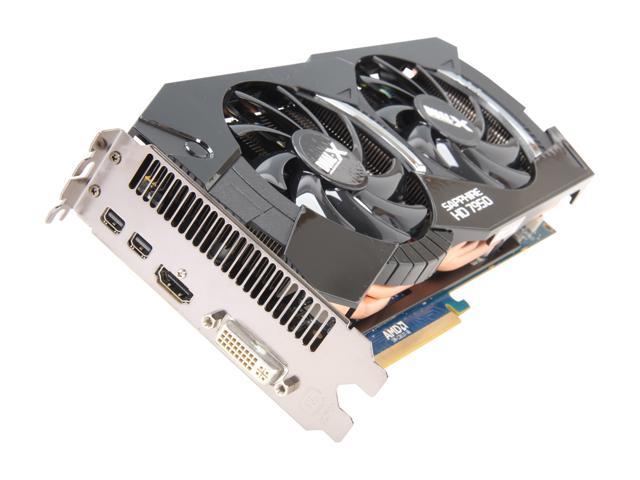 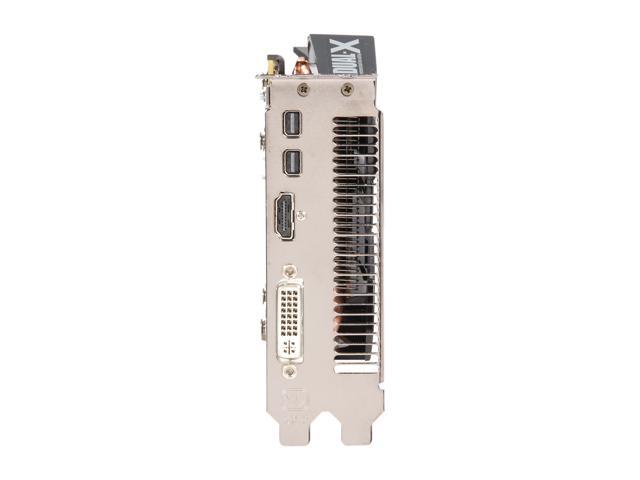 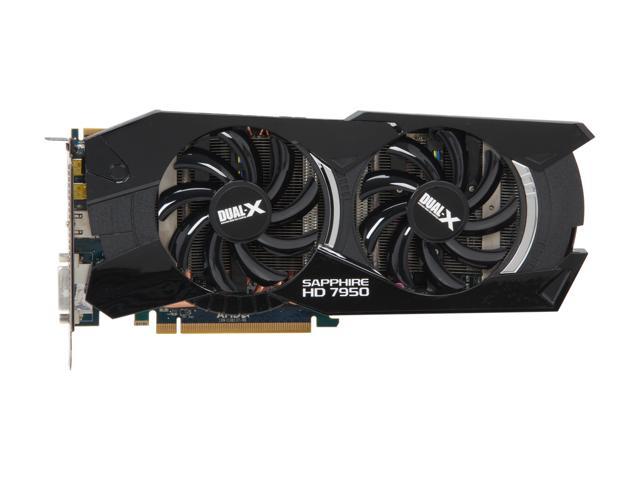 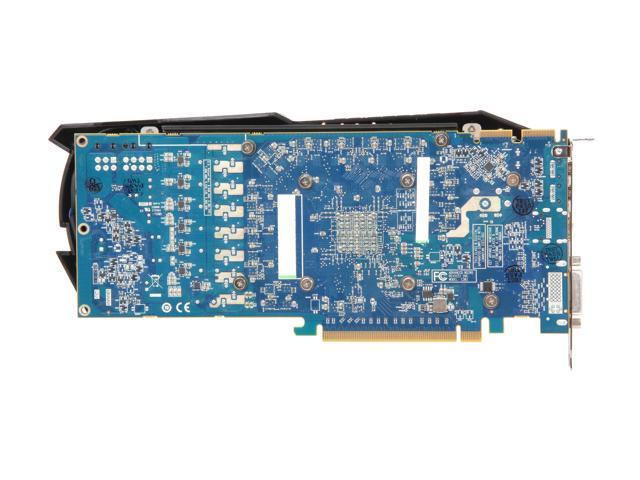 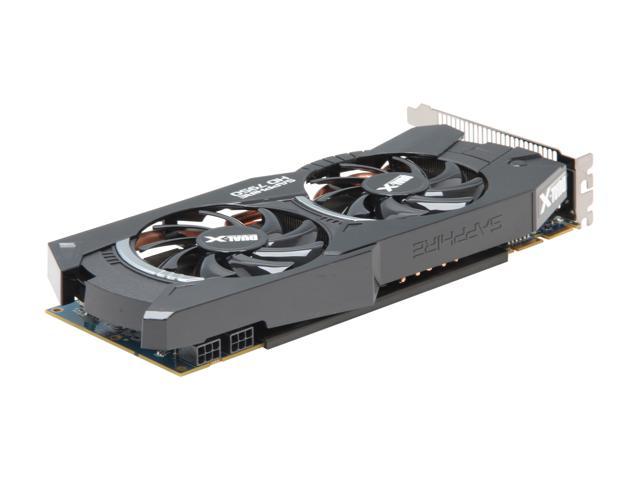 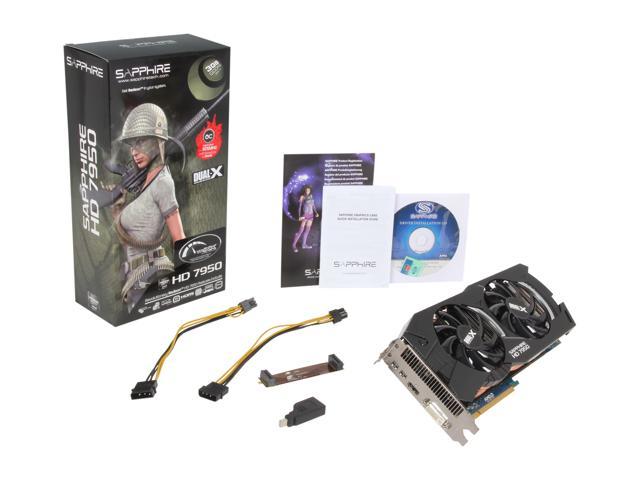 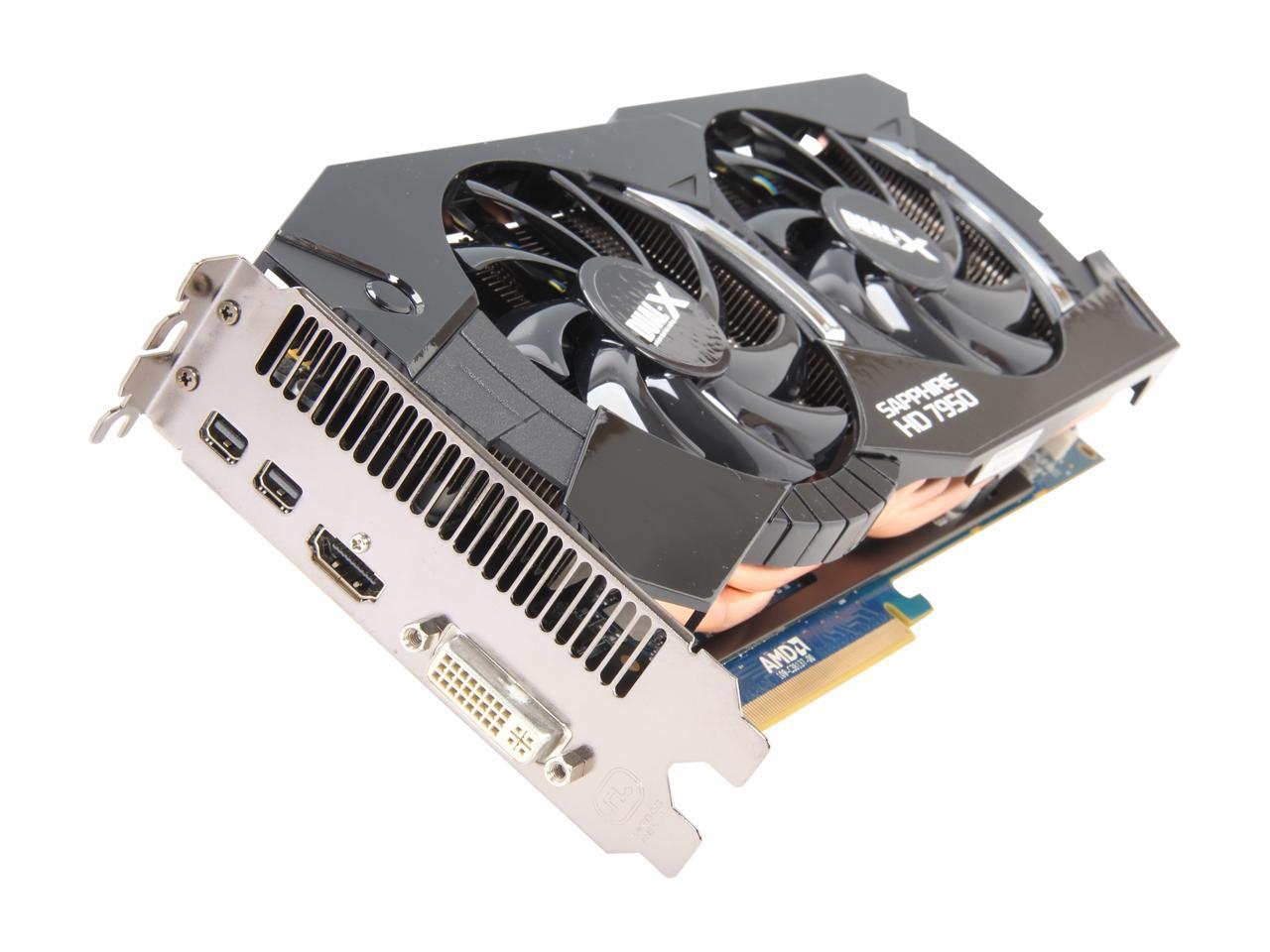 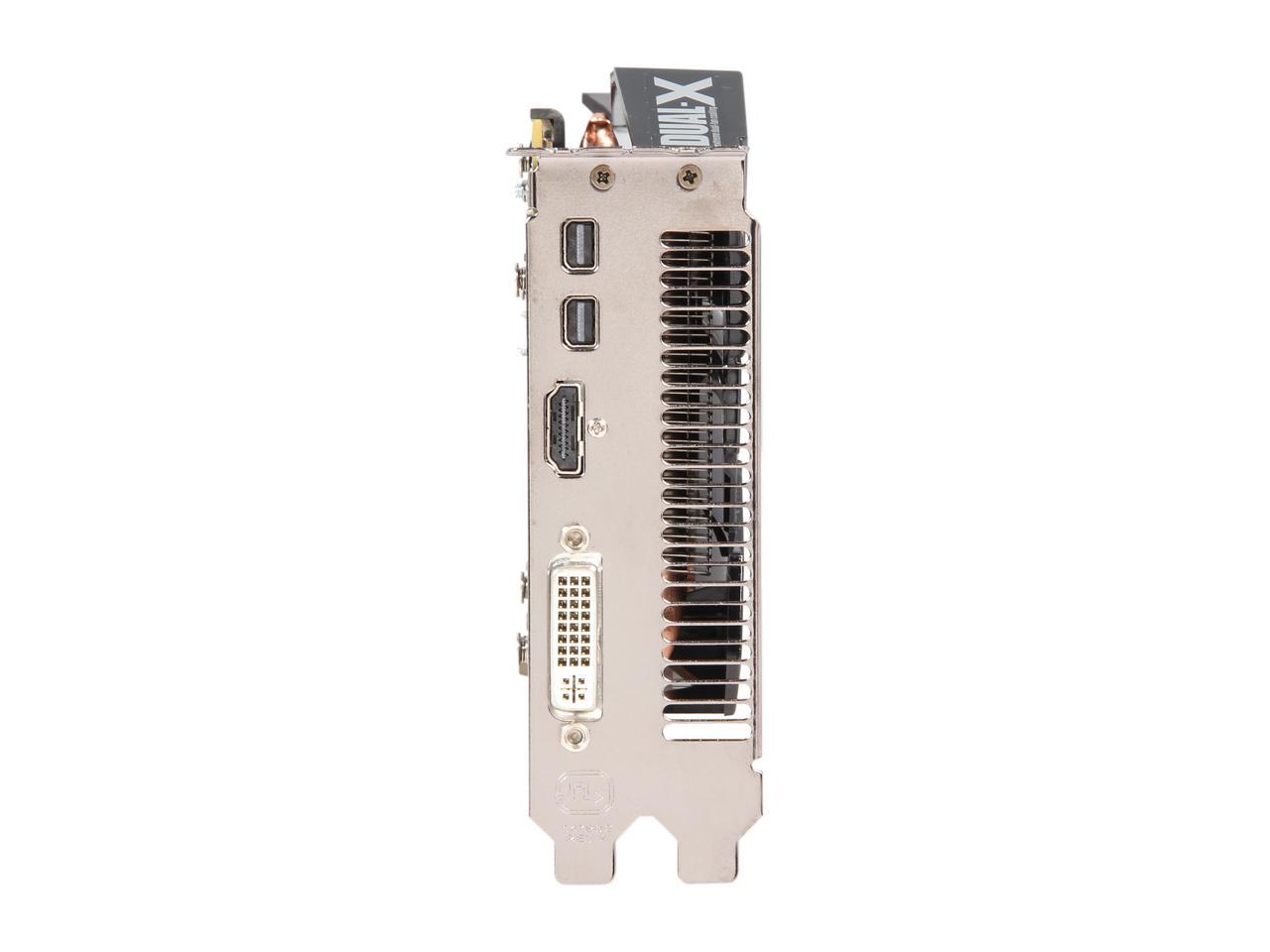 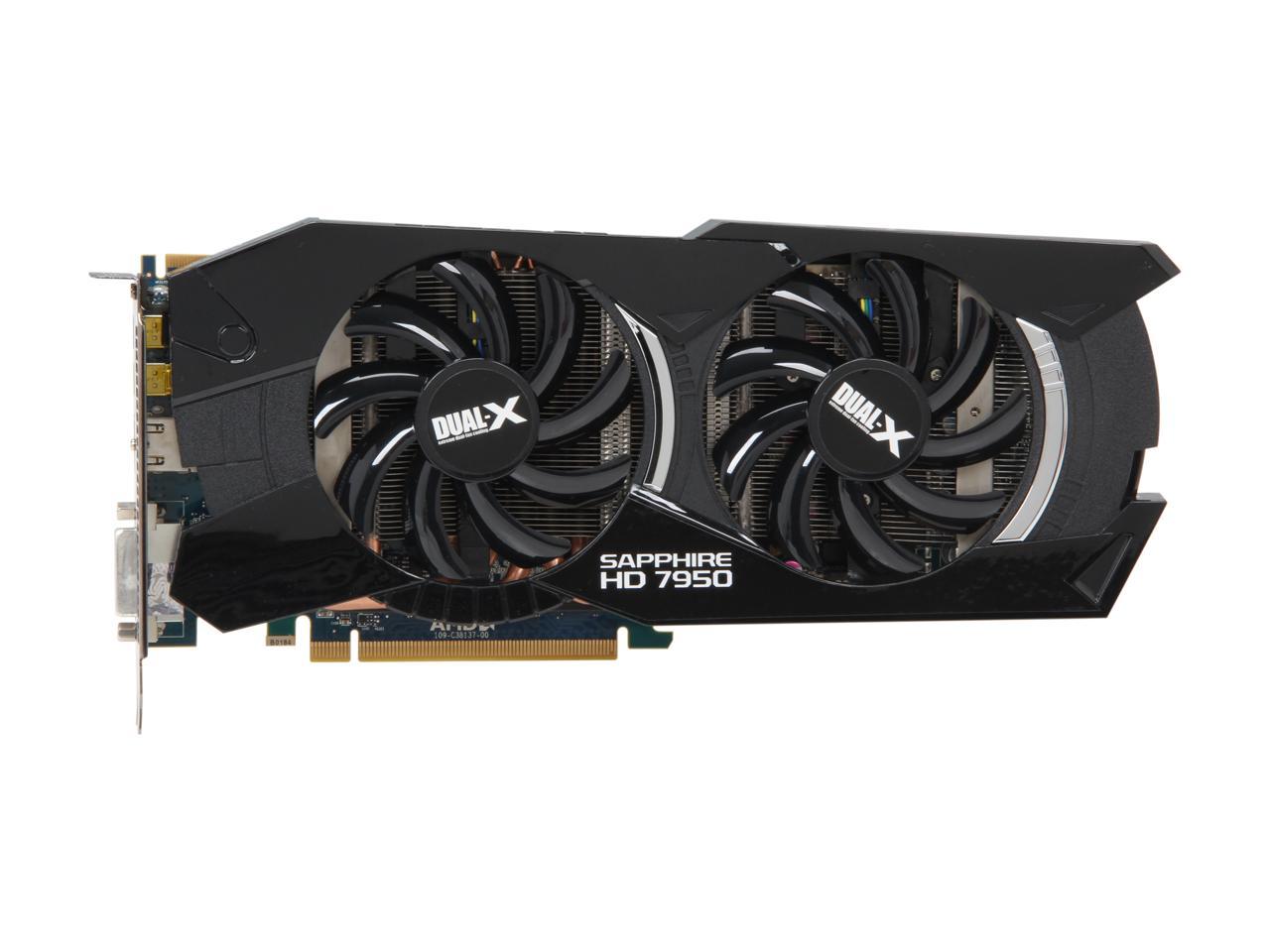 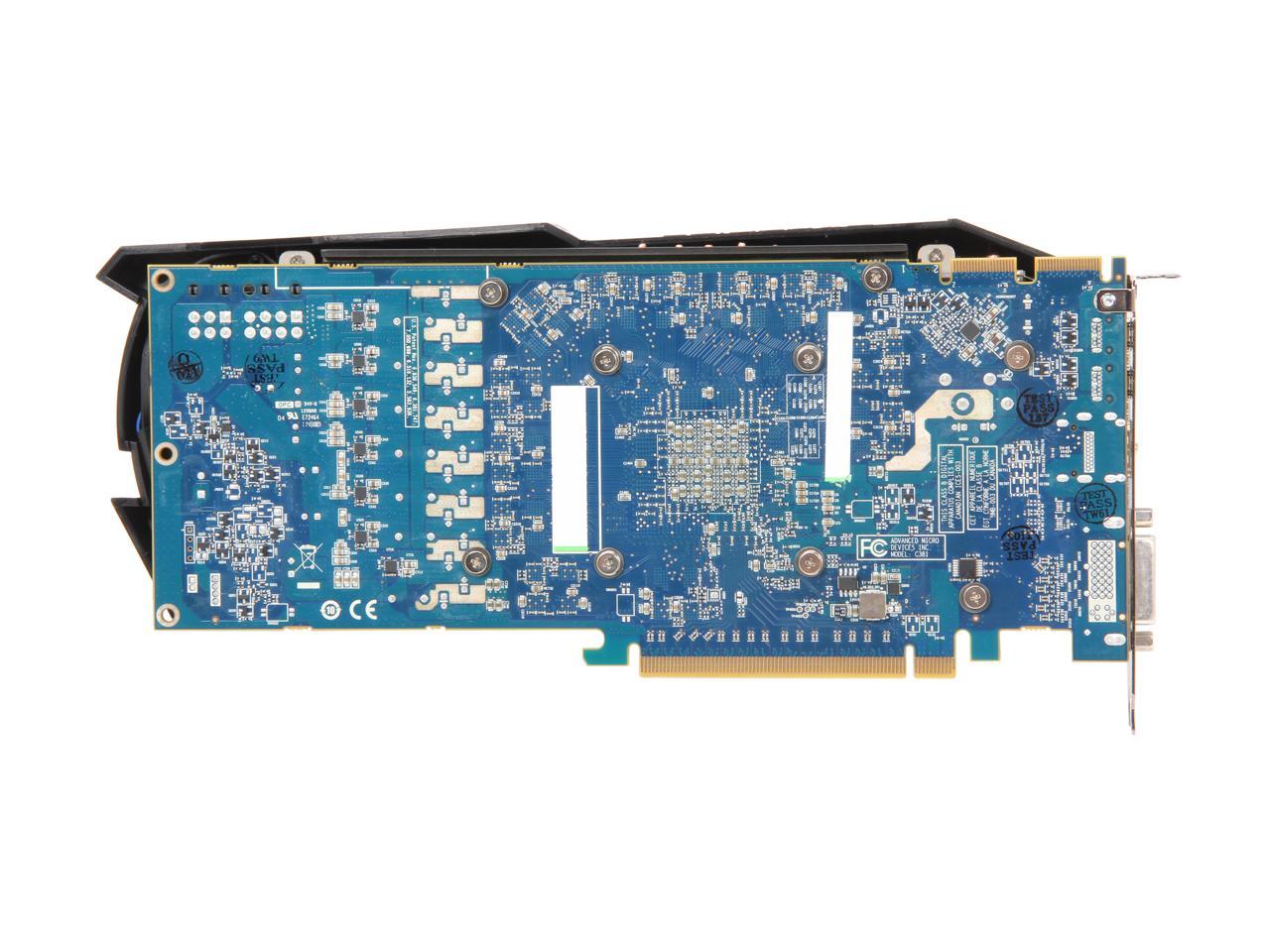 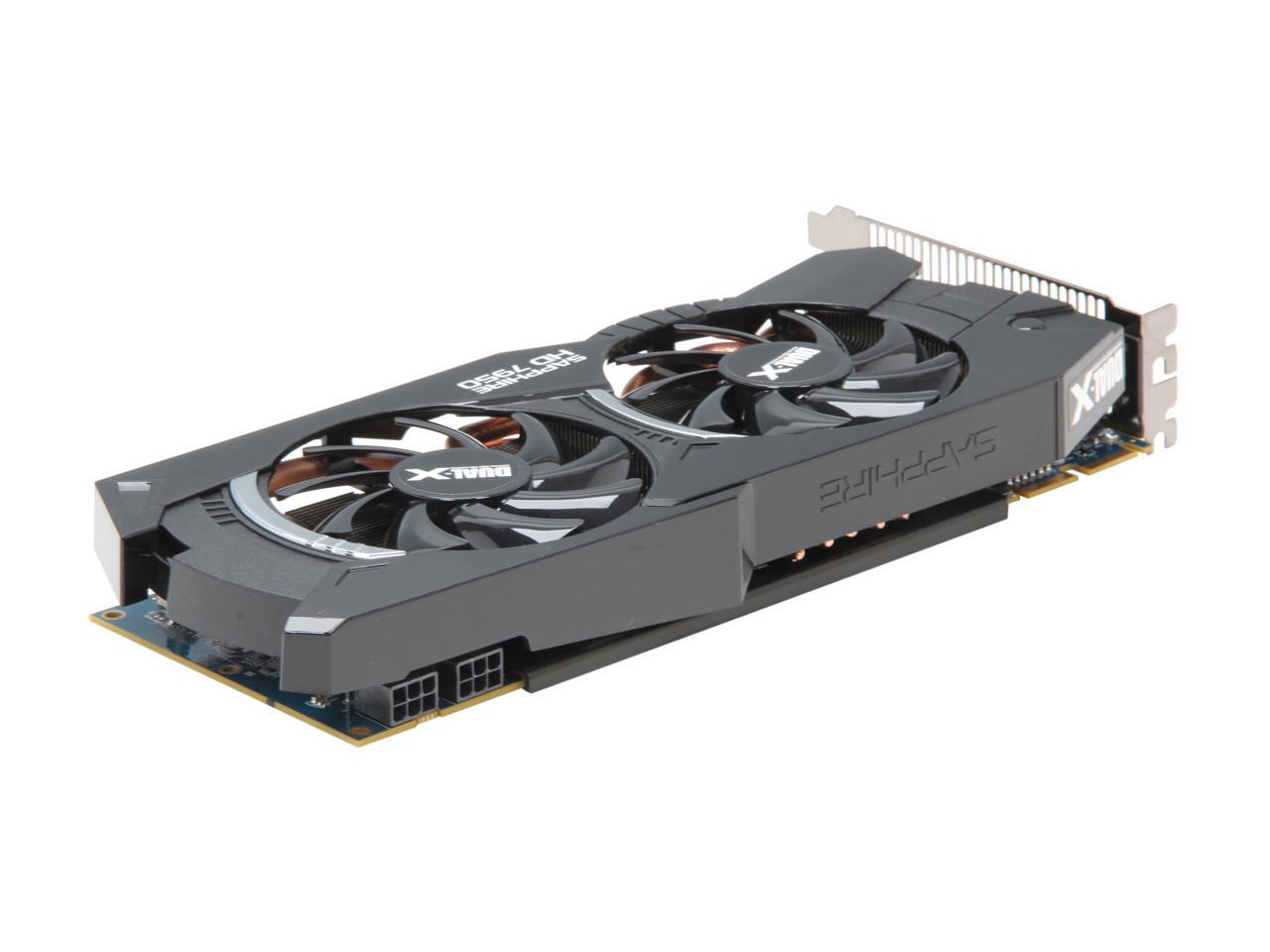 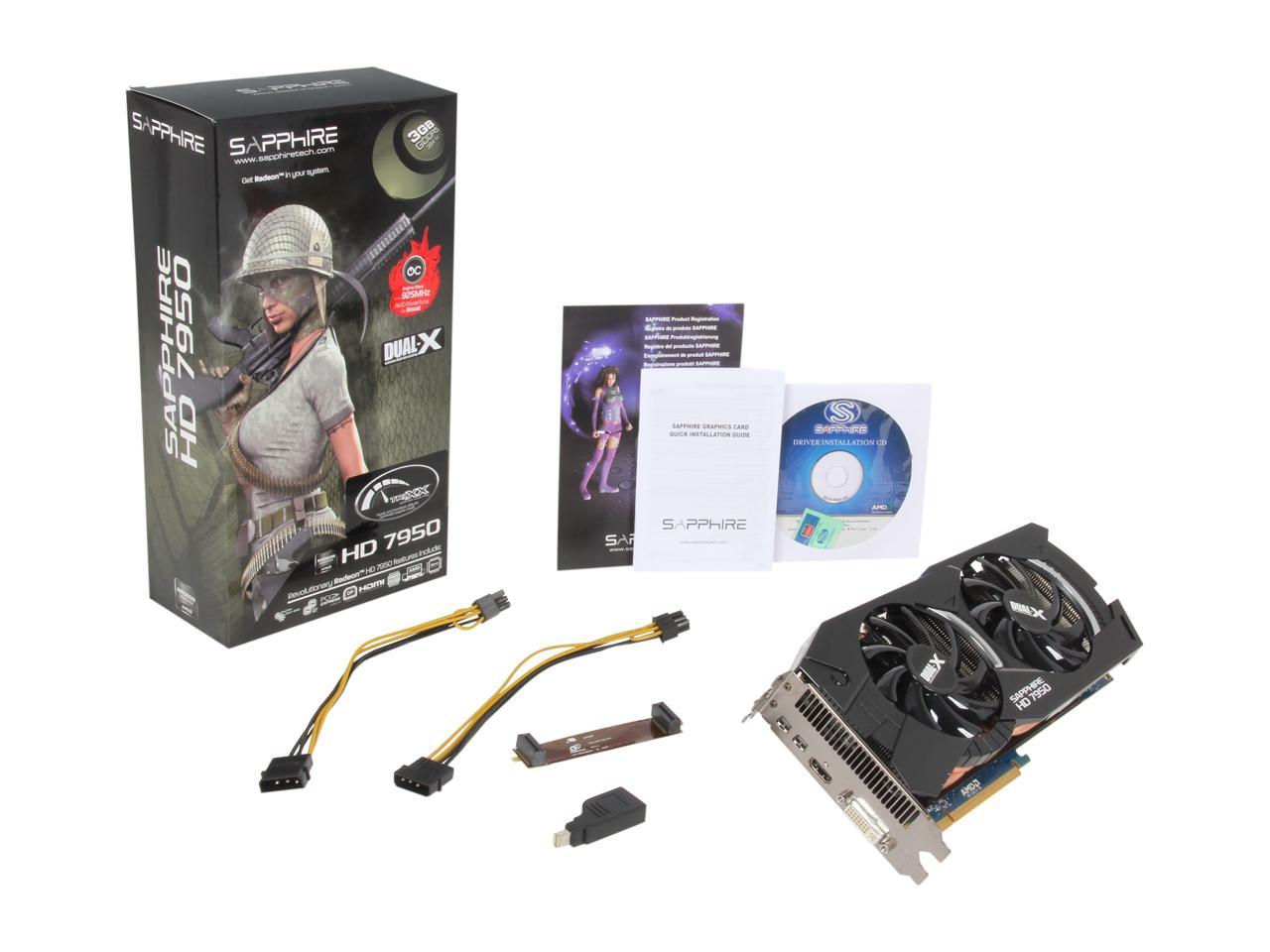 (225) Write a Review
OUT OF STOCK.
Overview
Specs
Reviews

The benefit of AMD PowerTune technology (with Boost) now comes to the SAPPHIRE HD 7950 3GB with Boost Edition graphics card. With PowerTune Dynamic Boost, you can enjoy faster clock speed of up to 925MHz which is 75MHz higher than the 850 MHz standard clock speed. Besides, the Radeon HD 7950 GPU offers graphics bliss with other advanced innovations including 28nm GCN (Graphic Core Next) architecture, Next Generation AMD Eyefinity Technology, AMD HD3D, AMD ZeroCore Power technology and more. SAPPHIRE's Dual-X thermal solution delivers optimal cooling performance and ensures stable performance even when battle heats up. With SAPPHIRE TriXX utility, you can tune the key parameters for maximum performance.

Pros: +Runs extremely cool and quiet. So far, my temps have never broken mid 60s. +Overclocks extremely well. On stock voltage (1.125), I am running at 1100 core / 1450 memory totally stable. I haven't tried going further but am sure that this card can go much further based on the results thus far. +12.11 drivers are great, absolutely dominates BF3. At my oc settings, my card is outperforming a stock GTX 680 in battlefield 3. I am getting an average of 100+ FPS at 1080p on auto settings. On ultra, I average between 70 to 80 fps. FPS measured using FRAPS. +Sapphire Trixx software is very user friendly for overclocking and for setting manual fan speed curves. +Within approximately 5% of the 7970 when at the same clock speeds according to Hexus .net +Can exceed stock 7970 ghz edition performance levels when overclocked properly (although a 7970 ghz edition can also oc) +Three free games that I would actually care to play +Bang for the buck +Sapphire is a top notch board maker. I was an Nvidia guy before, but even I knew that Sapphire was high quality and specifically looked for this brand when switching over. +Uses less power than a 7970 My settings in Trixx: GPU Clock: 1100 Memory Clock: 1450 Board Power Limit: 15% (20% is max)

Cons: Minor, but consistent with what some owners have noted, I on very rare occasions get a flicker of the screen when the card is in 2d mode. Note that this only appears to happen to monitors running at 120hz, so probably not an issue for most people, and it happens so infrequently (sometimes hours apart) that it doesn't bother me at all. Just be aware that this issues is not to be confused with signs of overclocking instability (so don't back off your overclock if you only get a minor flicker when in 2d mode and have no other issues, you are fine).

Overall Review: Overclocking is incredible with this card. I am amazed. I have never had a computer part that overclocked this dramatically with no hint of instability. I was originally in the market for a gtx 670 until I saw the latest benchmarks with these cards, especially when overclocked. When overclocked, the GTX 670 really seems to struggle to keep up per the benchmarks/reviews online (just look it up). Tip for overclocking: You will want to adjust your power slider upward incrementally while logging your clock speeds in GPUZ. At 1100 core / 1450 memory and the power slider at 10%, my card was throttling back the clock speed at times, which I could only tell when reviewing the GPUZ log. So, I adjusted to 15% and boom, no more throttling, and I still have an extra 5% of headroom before I would need to start voltage tweaking. As an example of how much throttling can hamper your overclock, my 3dMark11 performance score was at 7000 when at 10% power. It jumped to 9800+ when at 15% power. Another popular overclocking tool is MSI Afterburner for those looking for something other than Trixx. To monitor temps, core clocks, and memory speeds, voltage usage, etc., download GPUZ and click on the "Sensors" tab at the top. Then look toward the bottom of the screen and click "log to file". It will prompt you to save the log. Then, play a game or run a benchmark and observe the results. Reviewing the log is extremely helpful when finding optimal overclocking settings.

Cons: It's very big so make sure you have a very long mid tower or a full tower. MEASURE BEFORE YOU BUY. This card needs 11 inches from the beginning of the PCB to the end of the shroud. The power connectors connect at the top rather than the side so you don't need any extra room on the side. No cons other than the size.

Overall Review: Upgraded from my incredibly noisy (but still impressive) XFX Radeon 5830. I put it in my Rosewill THOR V2 full tower case and it has plenty of room. There's a good 3 inches between it and the HDD cage. Only running at PCIe 2.1 bandwidth speeds because of my aging mobo and cpu (Asus M4A87TD-EVO, Phenom II X4) but I don't think 3.0 bandwidth would make that much of a difference.

Pros: - Price/performance ratio is on the money. I paid $289.99 for it ($269.99 if I ever get around to doing the rebate) right here off of Newegg. - Fantastic performance. The only game it has struggled with at maximum settings is Crysis 3. It is, however, capable of playing the game on a mixture of medium and high settings at 1080p and maintaining a constant 60 FPS. Every other game, such as Skyrim, plays at maximum settings at 1080p at a constant 60 FPS. - Excellent cooling. Depending on the ambient temperature, the video card typically does not exceed 68C under load. The highest I've gotten it is 74C. Well within normal limits. - Superb "overclockability." Without even trying, I got this card up to 1150 GHz core and 1575 GHz memory at 1.25 volts. However, the performance gains are minimal, since there aren't many games that stress it. I've decided to keep it at stock settings for now, with decreased voltage. - Multiple outputs. The card sports a DVI port, an HDMI port, and two Mini DisplayPorts. This is a breath of fresh air, even if it isn't necessarily a new feature in video cards or exclusive to this card.

Cons: - AMD drivers. Admittedly, they're not awful and are improving with each release. But some frame latency issues persist in the vanilla driver settings (although there's an easy fix for that - described below in "Other thoughts"). Although it's fixable, it still rubs me the wrong way that it continues to be a default issue. - Coil whine. Really only noticeable under two circumstances: whenever a game has an FPS count way up in the thousands or whenever I am using the WEI tool. I play my games at 60 FPS and I only use the WEI tool once to evaluate my setup when I add new hardware. In any other situation, coil whine is not present. Plus, almost all video cards have coil whine these days, so it's hard to knock the video card specifically for that. - Noise. The fans will get a little loud past 50%, but if you set up an effective fan curve, they shouldn't spin much faster than 50%. My card stays nice and cool in my case, and I'm sure it will for most people, but if you happen to have to ramp up the fan speed, it probably won't sound nice.

Overall Review: - As far as the driver and latency issues are concerned, there are multiple fixes available. Enabling dynamic vertical sync via RadeonPro software is one way. Limiting FPS manually to 60 using software such as MSI Afterburner is another, should RadeonPro fail to do the trick. This alleviates the issue entirely. Still, though, the fact that AMD has been aware of this issue for months now (see link at end of section) and it still exists as of the 3/15/13 drivers (haven't tried the 3/19/13 ones yet) and can only be fixed with third party software irks me somewhat, which is why I knocked the product one egg. For those curious, I found the issue to be most prominent in indoor settings in Skyrim. Other games didn't seem to be as affected by the issue, or to a much lesser extent. Some people may not even be sensitive at all to the issue. Overall, though, this video card is a fantastic choice. You get truly competitive, top-tier performance at a reasonable price. This card really does ram horns directly with the GTX 670, which is priced considerably higher than this card. AMD drivers are continuing to improve, enhancing the value of the card. Highly recommended. (Link: http://www.legitreviews.com/news/14814/)

Pros: Runs all game on ultra settings smoothly Has two fans which result in a extremely cool gpu

Cons: Really big but this is to be expected. Contant Artifacts in game but ill fix this later

Overall Review: FIRST TIME BUILDERS READ PLEASE.Please dont be a noob and make the mistake i did. I used this card on my first rig ever and didnt realize it took two pci-e cords coming from the PSU to power it. I wasted to much time trying to figure out the problem.

Pros: Probably best value video card out there, I'm running everything save for Crysis 3 maxed out @ 1080p, the only thing I turn down on Crysis 3 is anti aliasing and anistrophic filtering, and those are still at 4x!!! This thing is very quiet, I've never worried to much about noise, but this thing runs whisper quiet, mid game!!! and I've had my case side off since I installed it and I can still barely hear the system! This card is simply a great bang for the buck, and about all most gamers will need. Newegg was great as well, the card shipped same day and arrived the next day!!!

Cons: The only con I can think of is what I keep hearing about the free game offer. Simply put, if something happens and you have to rma the card, newegg deducts $170 from the price of the card for the games if you want your cash back and not a replacement, first $170 is very excessive for 2 games, second you didn't ask for the games and they are supposed to be free!! It would feel like a double rip to have a defective card and get half the price deducted for supposedly free games that you didn't even ask for. I've had mines for a little over a month now so any rma now would be with manufacturer anyway. It's just a warning though as my card has performed better than I could have hoped for since I've had it.

Cons: The card is long and heavy! Not really a con but make sure your case and motherboard can support this video card's size and weight.

Overall Review: I design PC boards and computer systems for medical equipment for a living so I am used to looking at this sort of stuff on a daily basis. Its nice to see quality work.

Pros: Plays every game on high or ultra settings no problem. I bought this for a water-cool setup so I didn't keep the heat sink on their long even though it looked decent running.

Overall Review: I took it a step further and water cooled it. The Trixx wouldn't let me overclock any further than Catalyst would. Now I used the MSI Afterburner software to unlock voltage so I could overclock it to 1250Mhz/1600Mhz with 1.250v and the card never breaks 46c with any game on my 1920x1080 screen. :)