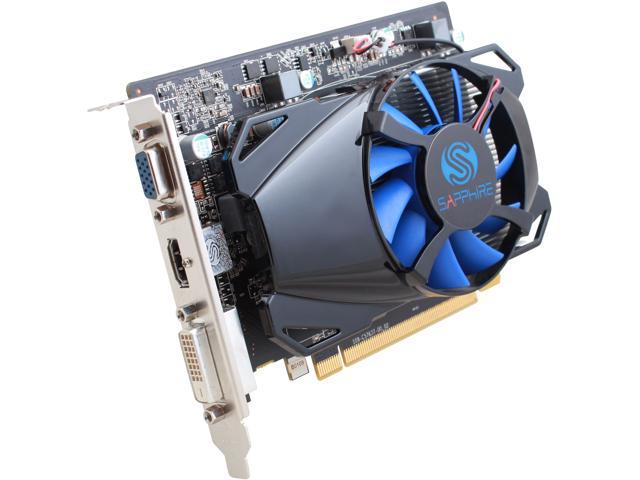 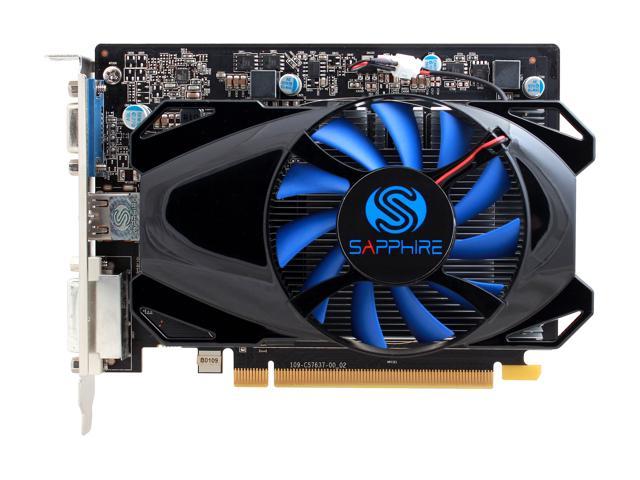 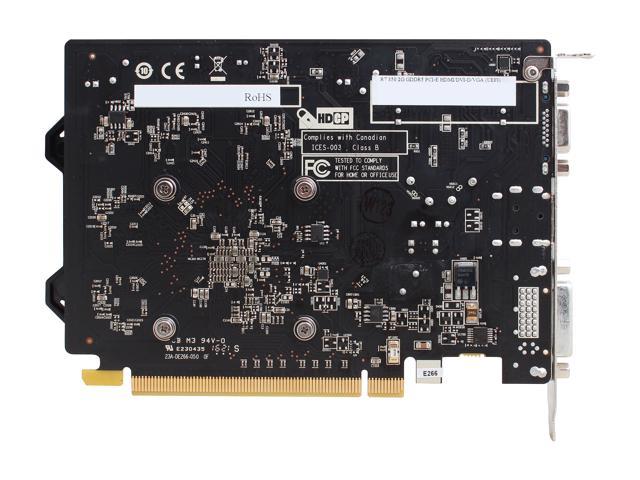 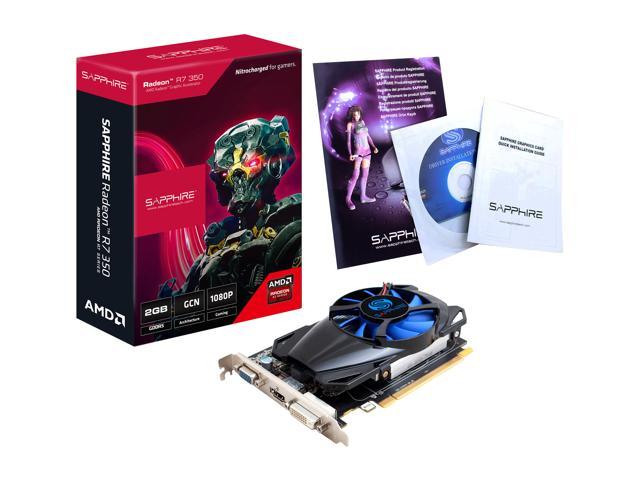 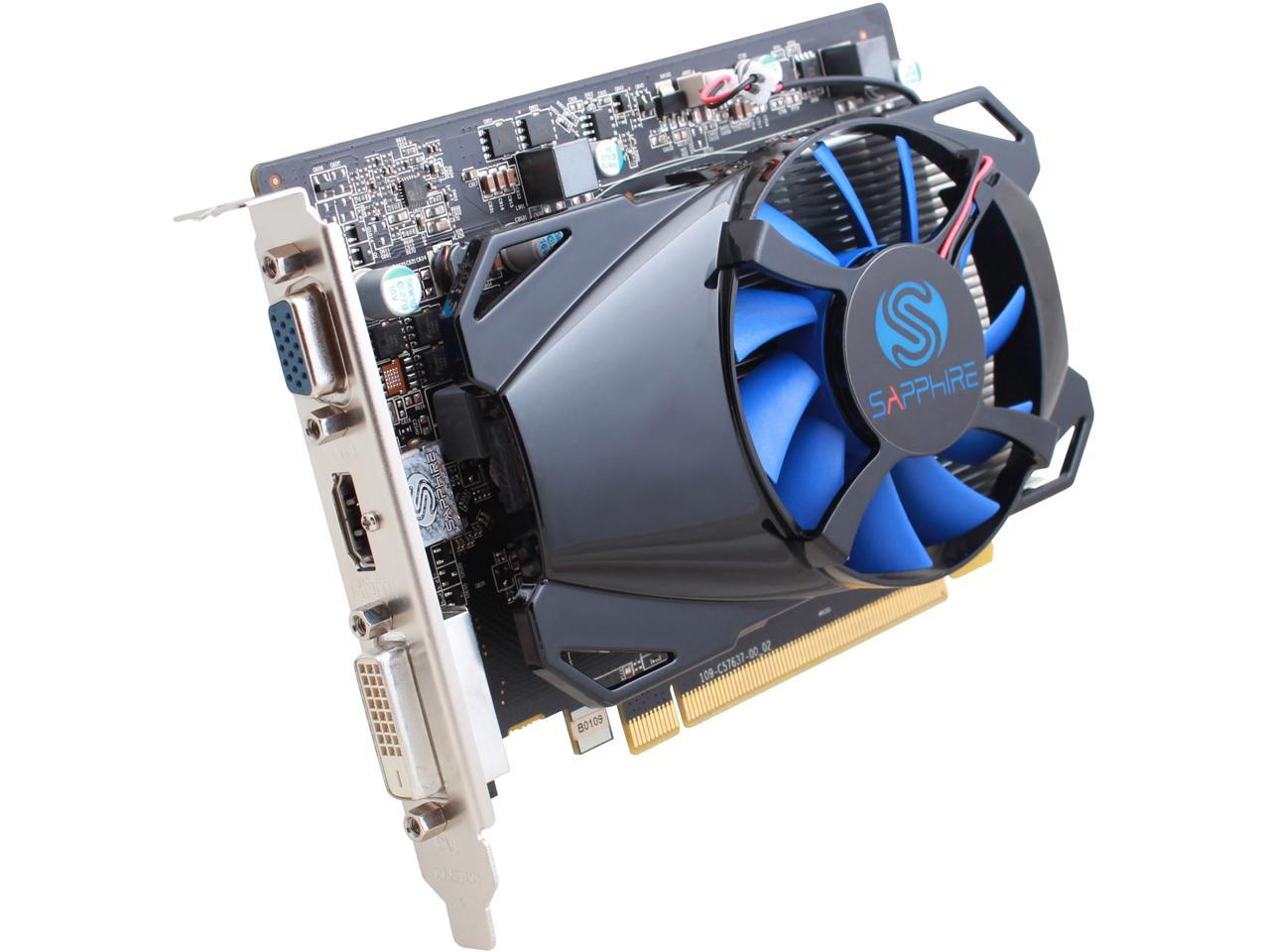 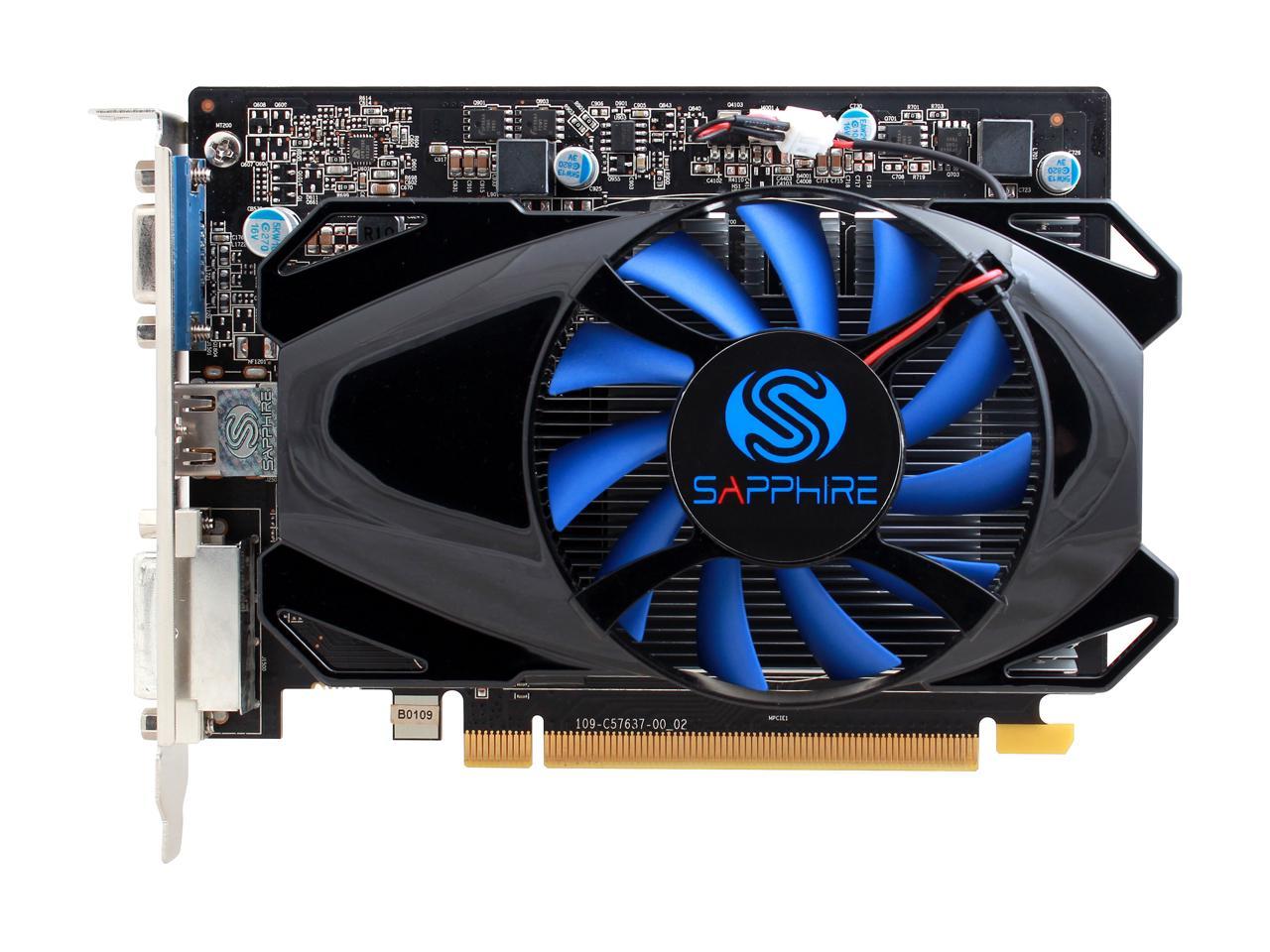 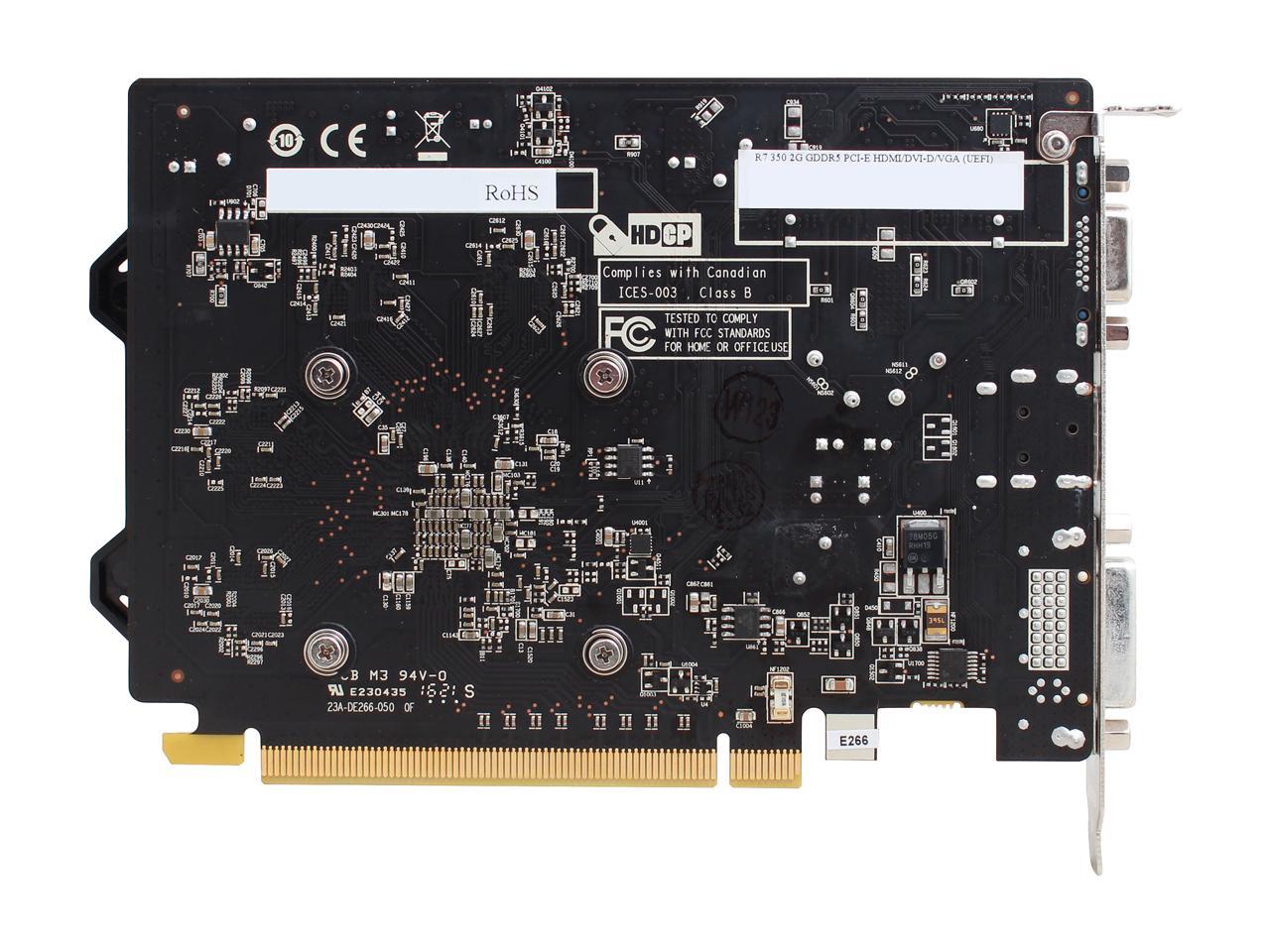 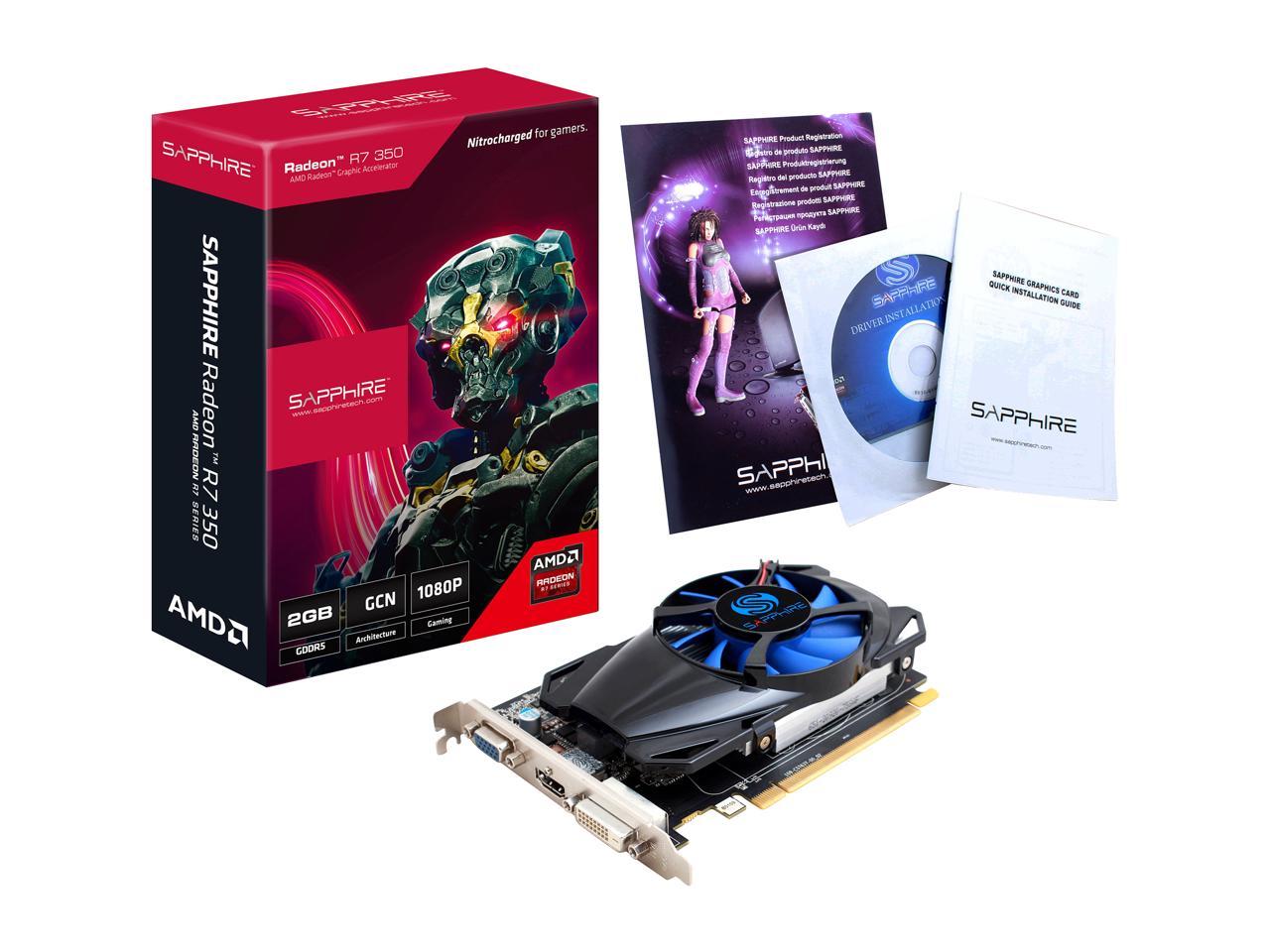 Dominate, warts and all. The SAPPHIRE Radeon R7 350 Video Card is built on the highly acclaimed AMD 28 nm GCN architecture, with high graphics performance to power consumption ratio. It is capable of rendering popular online games at high settings with visual realism that doesn’t sacrifice performance. And no tearing or stuttering. Coupled with support for DirectX 12 and OpenGL 4.5, it gives you everything you need to enjoy games today and tomorrow.

More graphics, less power. The AMD CrossFire technology harnesses the power of multiple GPUs for extreme, high definition gaming and 3D image quality. With AMD ZeroCore Power & PowerTune technologies, you can optimize the balance between performance and power consumption of your system by adjusting the engine clock during runtime of the card.

SAPPHIRE Radeon R7 350 Video Card is designed to deliver all the benefits of Microsoft Windows 10 OS and bring new computing experiences to life. Allows your AMD Radeon GPU to consume virtually no power when in idle state. It also controls additional GPUs in AMD CrossFire technology mode to consume less when it is not in use.

Cons: Only 128 bit but still better than the nvidia 64 bit offering in the price range.

Overall Review: I swore off ATI cards after they dropped support for their legacy drivers for Linux. However, I finally gave in after I compared other video cards in the price range. The card I almost got was the Nvidia Geforce GT 730. I decided to go with the Radeon due to more bandwidth. Great card for the money and it runs great so far.

Cons: Non for the price it is at.

Cons: - None For a budget card, this is a great pickup. However, if you are looking to game above 1080p, you'll need to move up.

Overall Review: I needed to upgrade from my older HD3850 with 512 DDR3. I know the polaris chips are out there now, but I didn't need that power yet, and didn't feel like spending $100 - $300 for a card that I wouldn't utilize. I picked this card up for about half the price of what the RX460 is selling for. I play older games and didn't need the more powerful cards out there. I've got a digital camera capable of taking 4K video. I wanted to be able to display that on my TV. This will allow that (through HDMI). This was a good option for GDDR5 and the price. Other cards in this price range were DDR3 or incapable of displaying the 4K content.

Pros: purchased two of them on sale. great performance per dollar

Cons: nothing negative about them

Overall Review: I bought two of these for 50.00 each. both are running now in pc's. The windows 7 machine is paired with an AMD FX-4300 with only 1066mhz system memory. It will run World of Warships around 40-65 fps. The Windows 10 machine has an Athlon X4-860K running stock plus 1866mhz system ram and will run World of warships at 45-70 fps. Niether card had any problems with drivers or other issues. Whats not to love?

Pros: I mean come on for $50 dollars, don't expect to slaughter triple A titles at max settings 1080p. Maxes out CSGO at over 100 fps even with a cheap cpu and rocket league maxed at 60 fps and dota 2.

Cons: Nothing for that price

Overall Review: i upgraded a computer with a sapphire hd 7750 (11202-96-90G) a year ago and wanted to upgrade another computer with something equivalent. tried a msi r7 250 which looked equivalent in specs / "on paper" (little faster gpu, but ddr3 instead of gddr5), but it was underwhelming / i was unimpressed, especially for roughly the same price as the aforementioned hd 7750 (ie $55 on sale / after rebate). i bought this knowing it was essentially the same gpu as the hd 7750 (cape verde), but clocked a little faster and 2 gb gddr5 instead of just 1 gb. and accordingly so, it performs a little bit better on benchmarks (10% higher fps), but generally unnoticeable on games. and it was even cheaper than the r7 250.

Cons: -Runs on Linux, but barely. Open source drivers are usable but not for any game. amdpro driver claims to be the fix but it just makes games playable at lowest settings possible. -Not a good Budget Steam Machine candidate (Not knocking an egg off though because it is to be expected for an AMD graphics product

Pros: 1. literally the exact same thing as an rx 460 but half the memory. 2. supports crossfire. 3. small easy to fit in pretty much any case 4. the cost

Cons: none that I can think of

Overall Review: I've seen a few other reviews by people both on newegg and other sites saying that the fan spins up then stops, and that they don't get any picture. I had the same problem at first too. but that is a common mistake I've made on both builds. it's highly likely those people forgot to connect the eatx12 power cables to the area by their cpu. sometimes those cables are also labeled as cpu which tends to throw people off because some people don't realize the cpu needs power too. that's often related to other display problems such as thinking the psu is DOA. etc. hope this helps and keeps people from RMAing something that isn't broken.