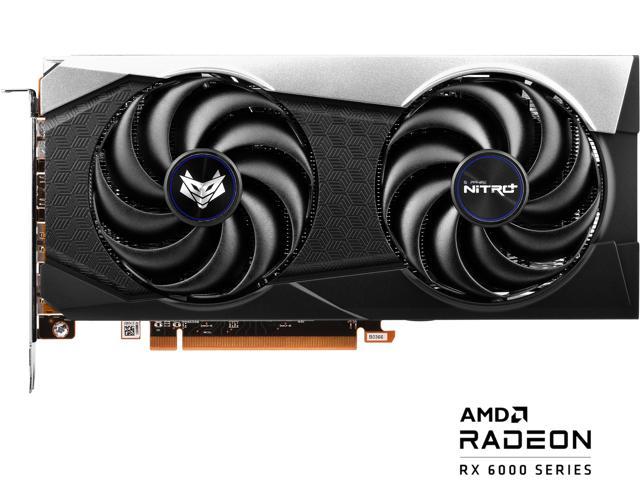 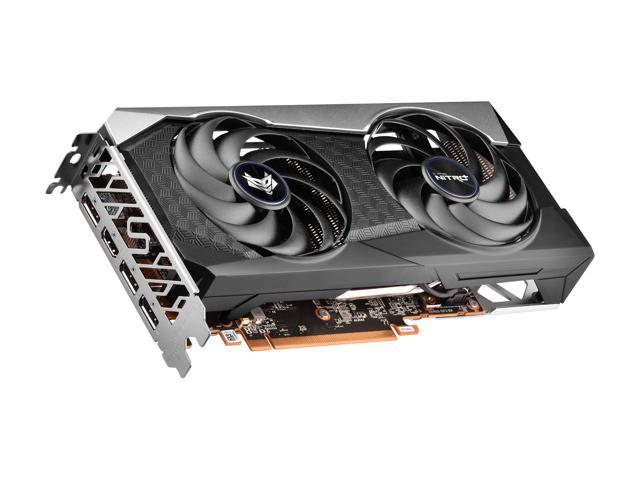 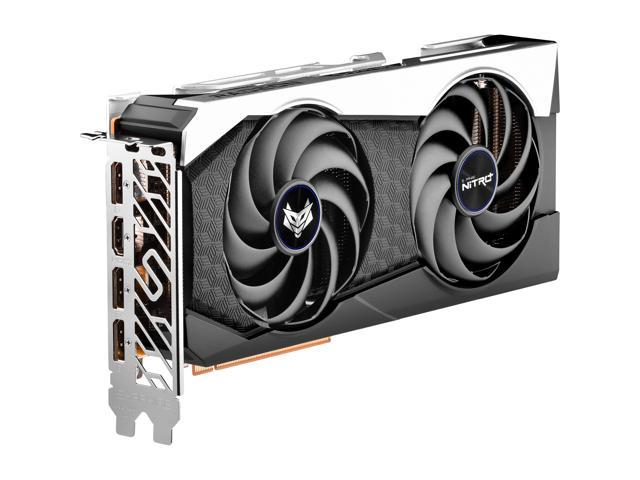 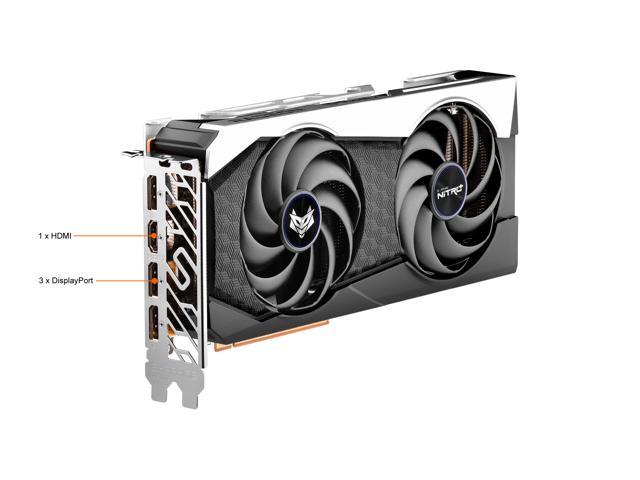 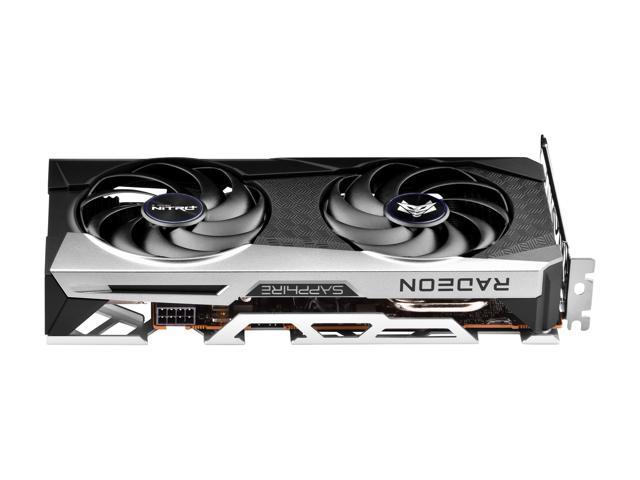 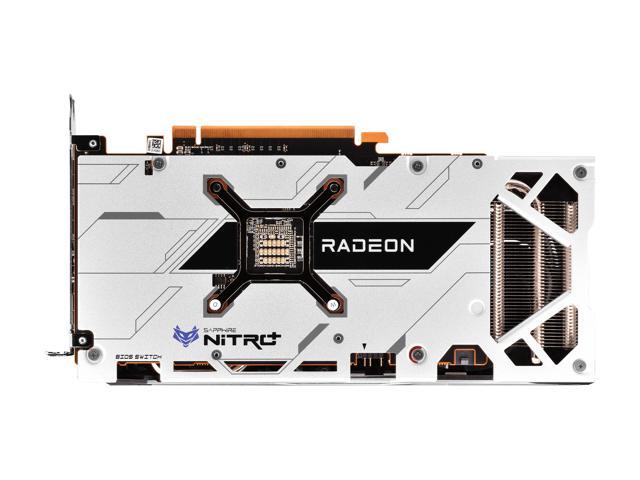 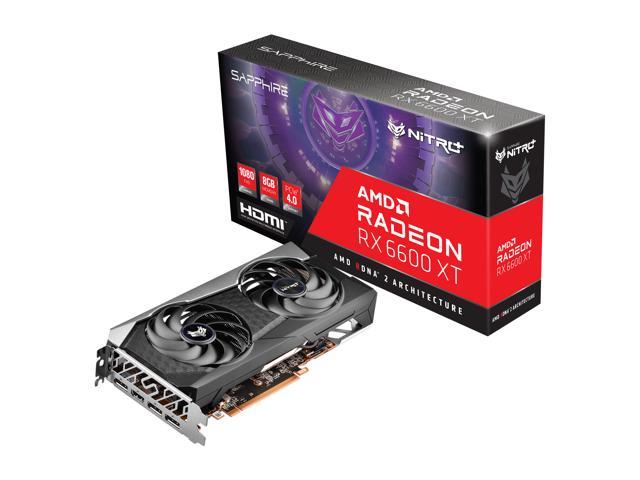 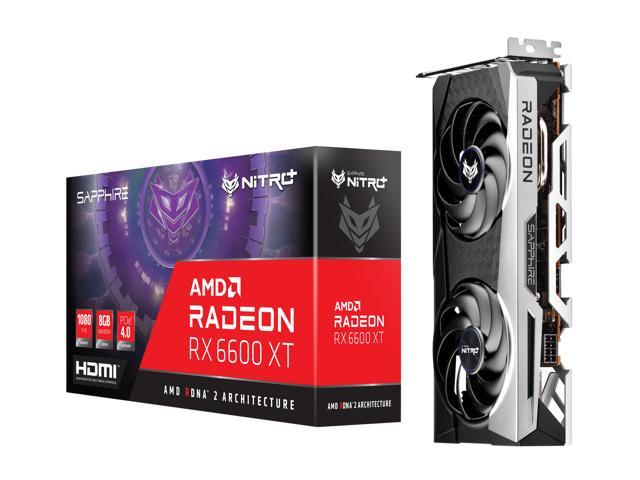 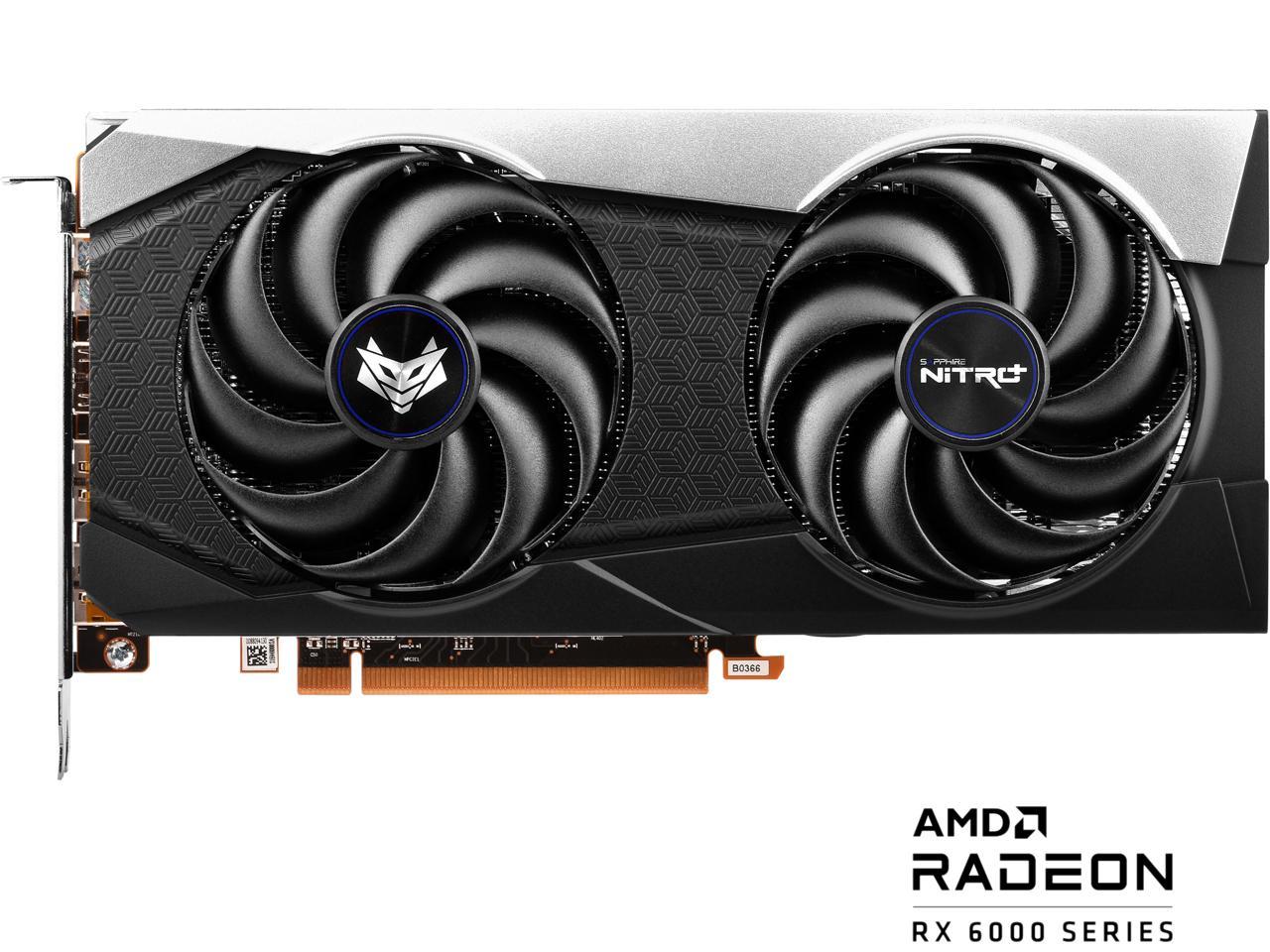 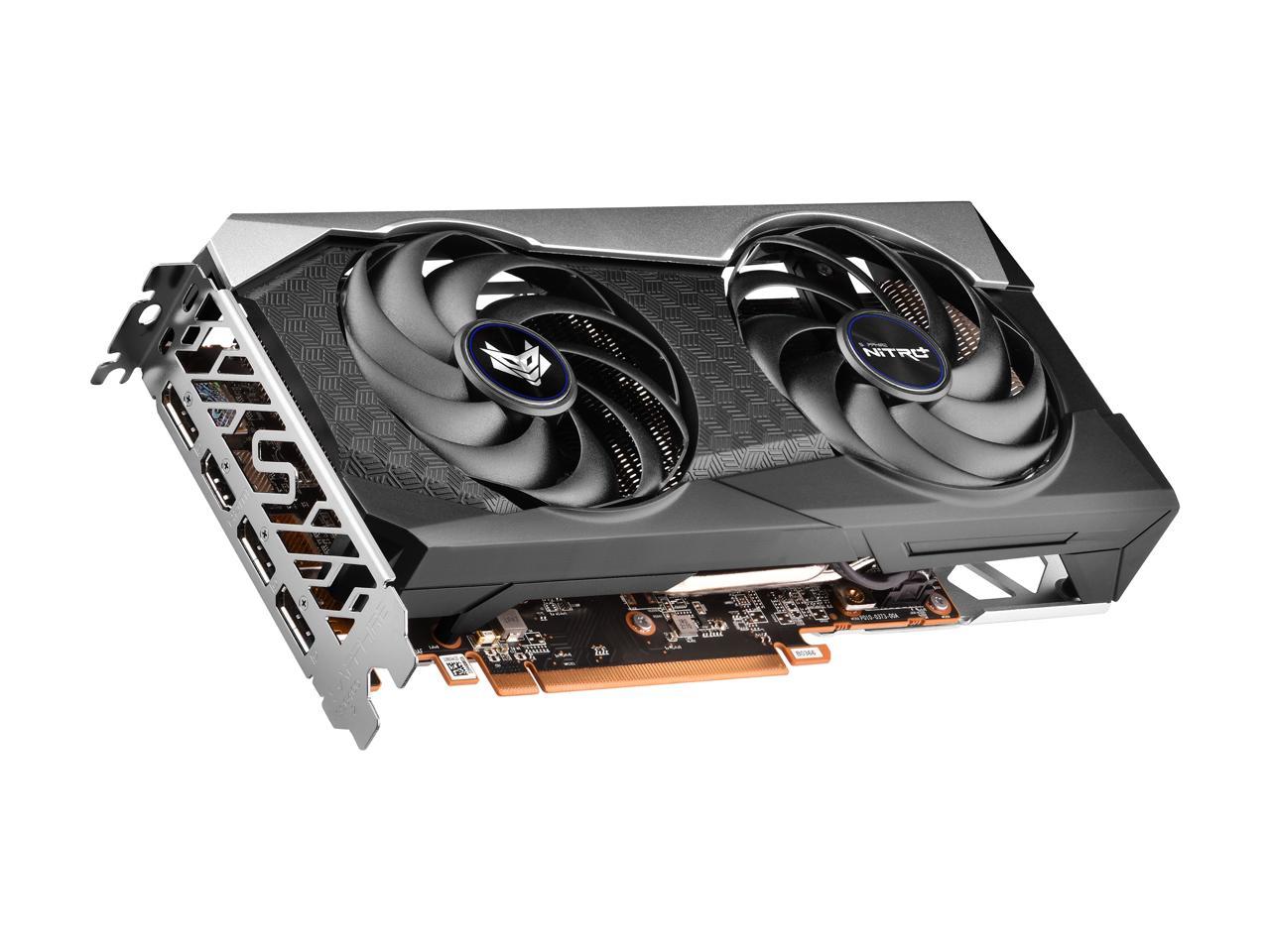 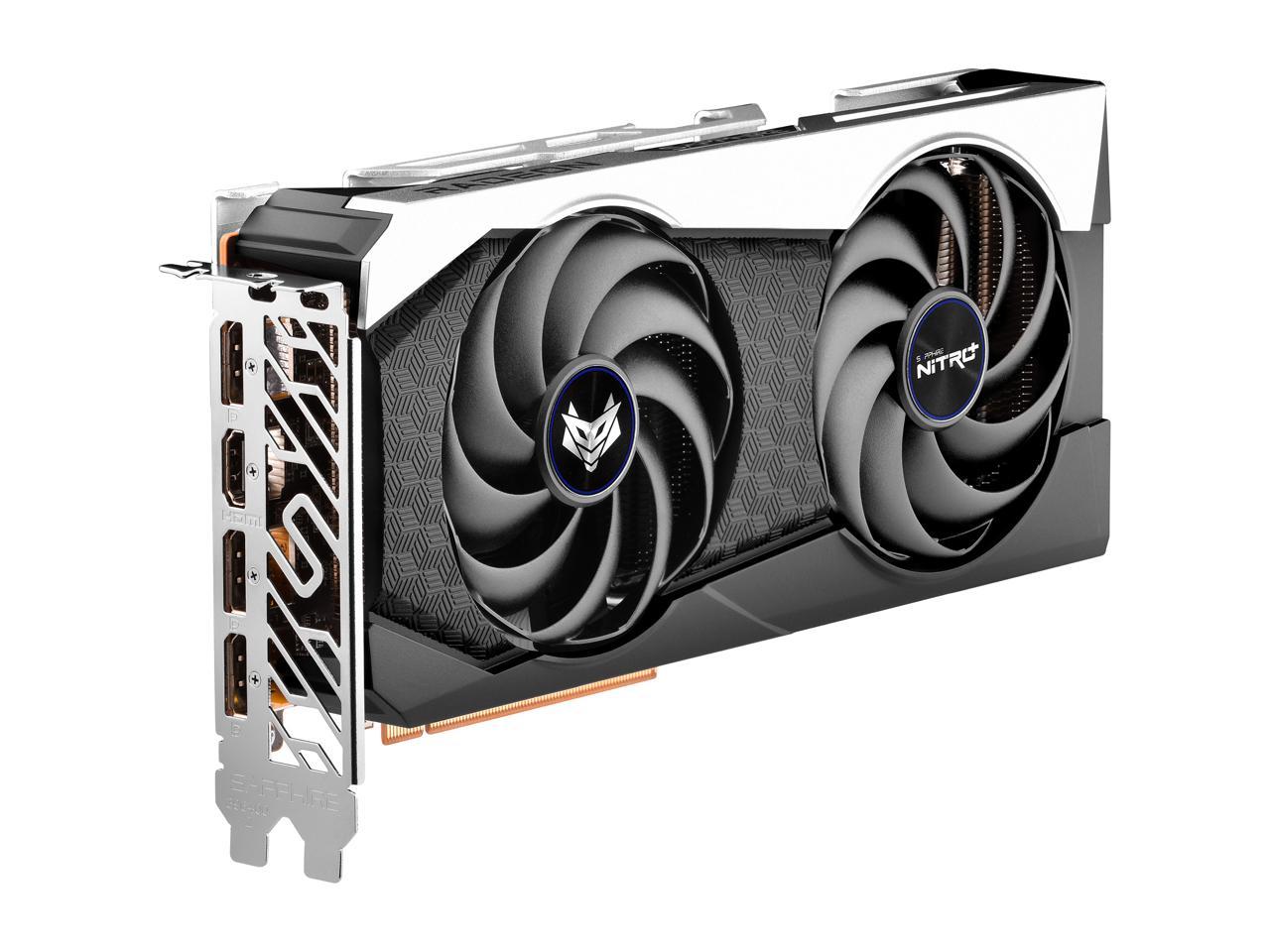 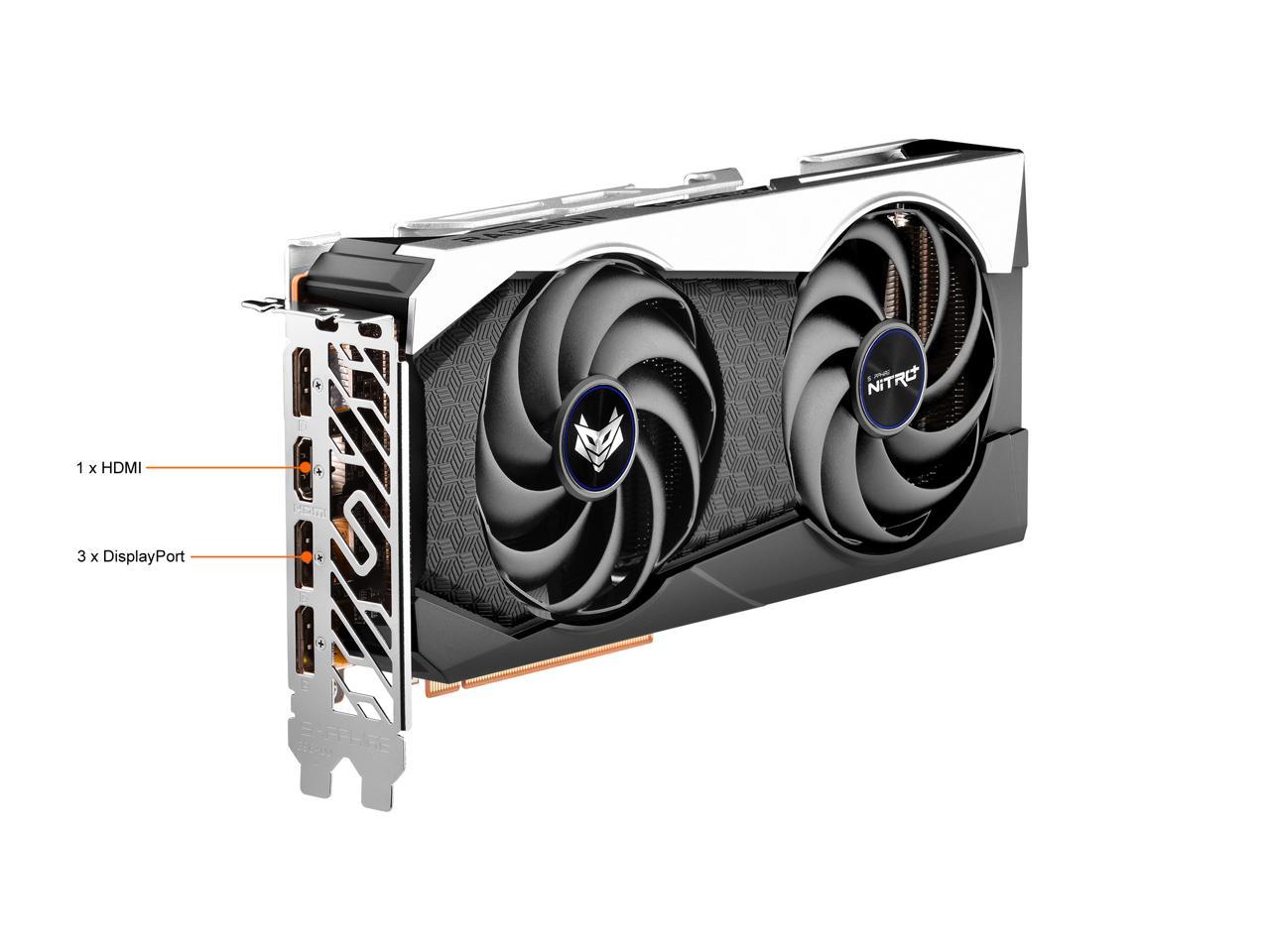 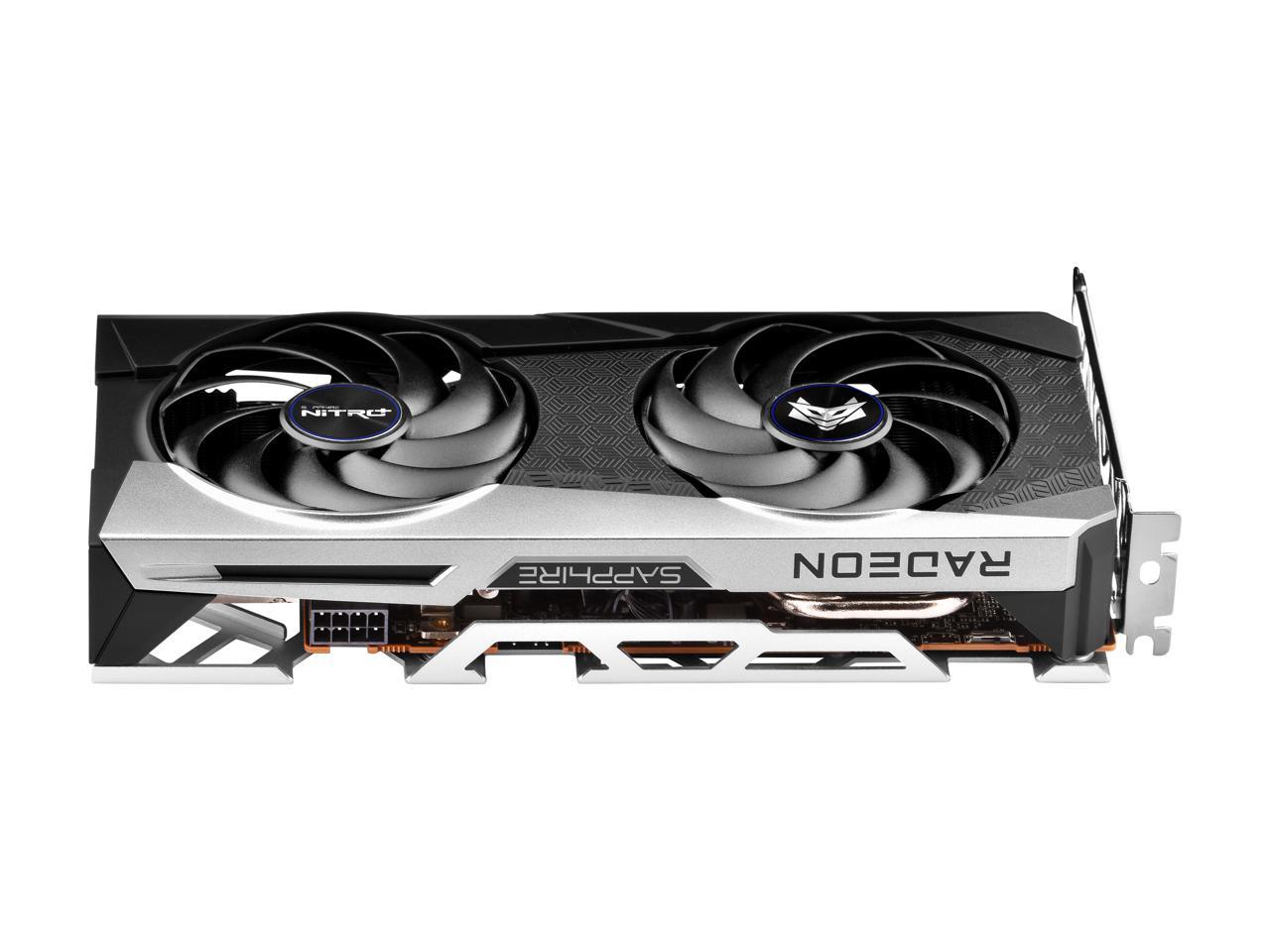 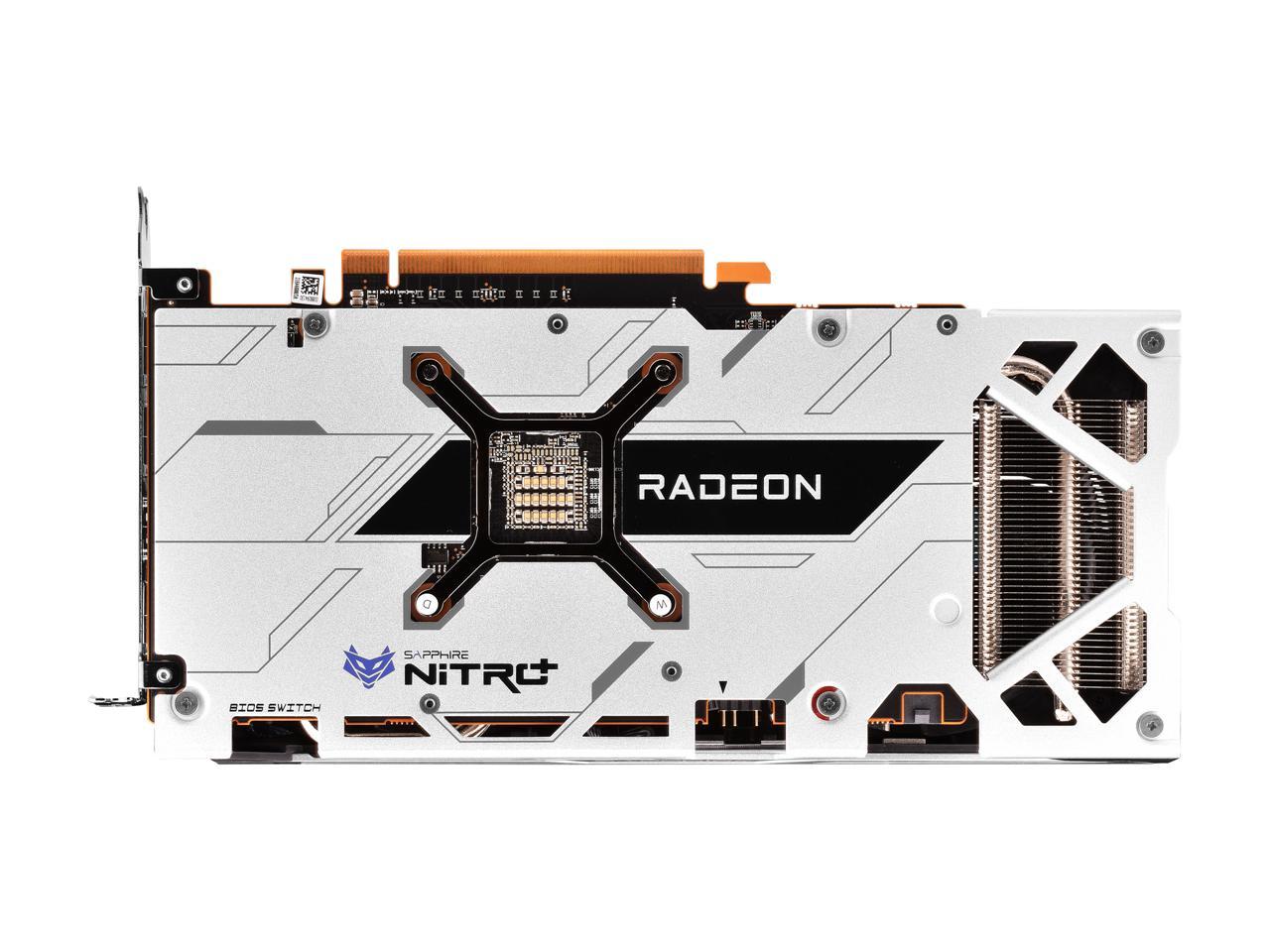 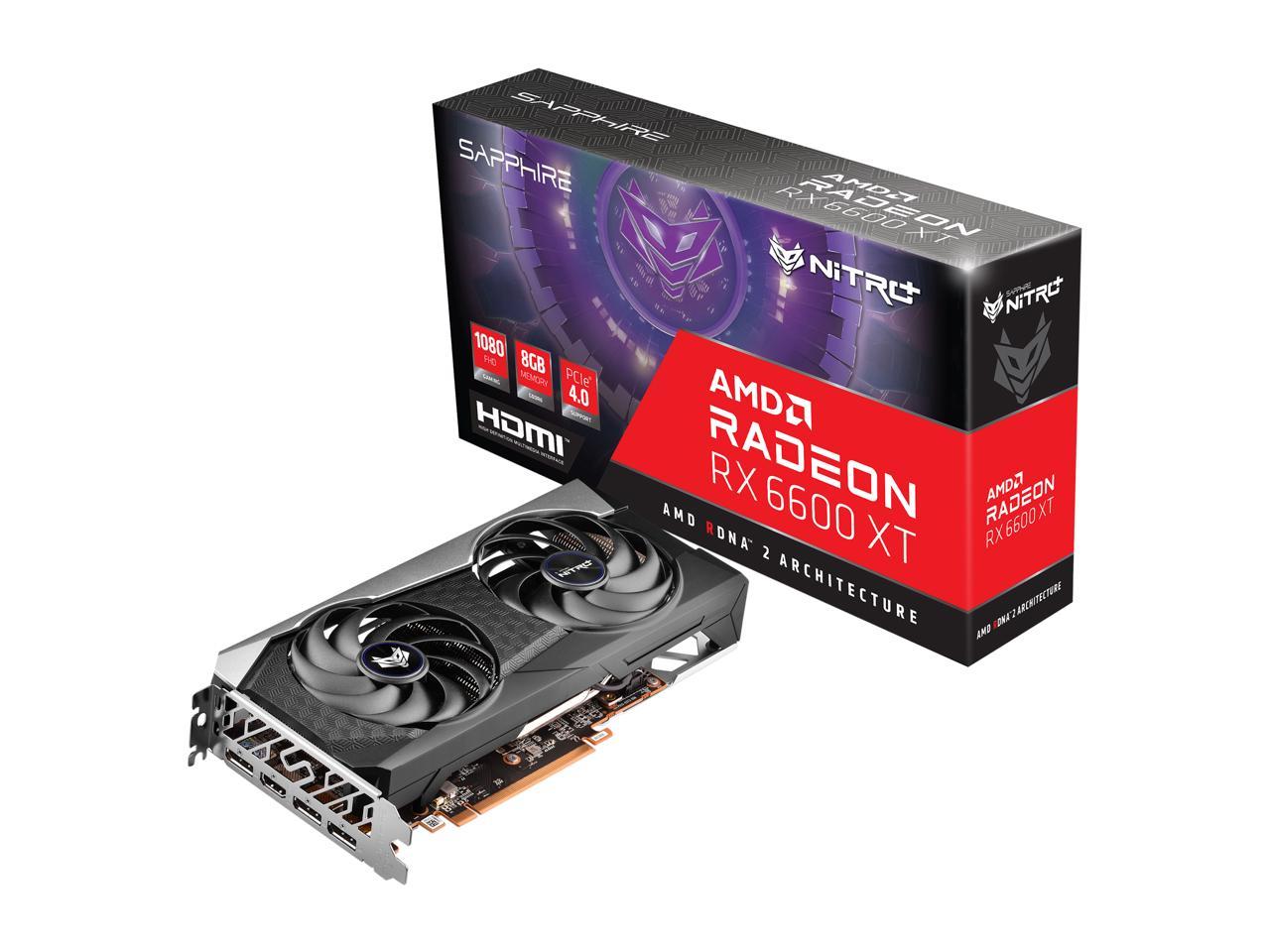 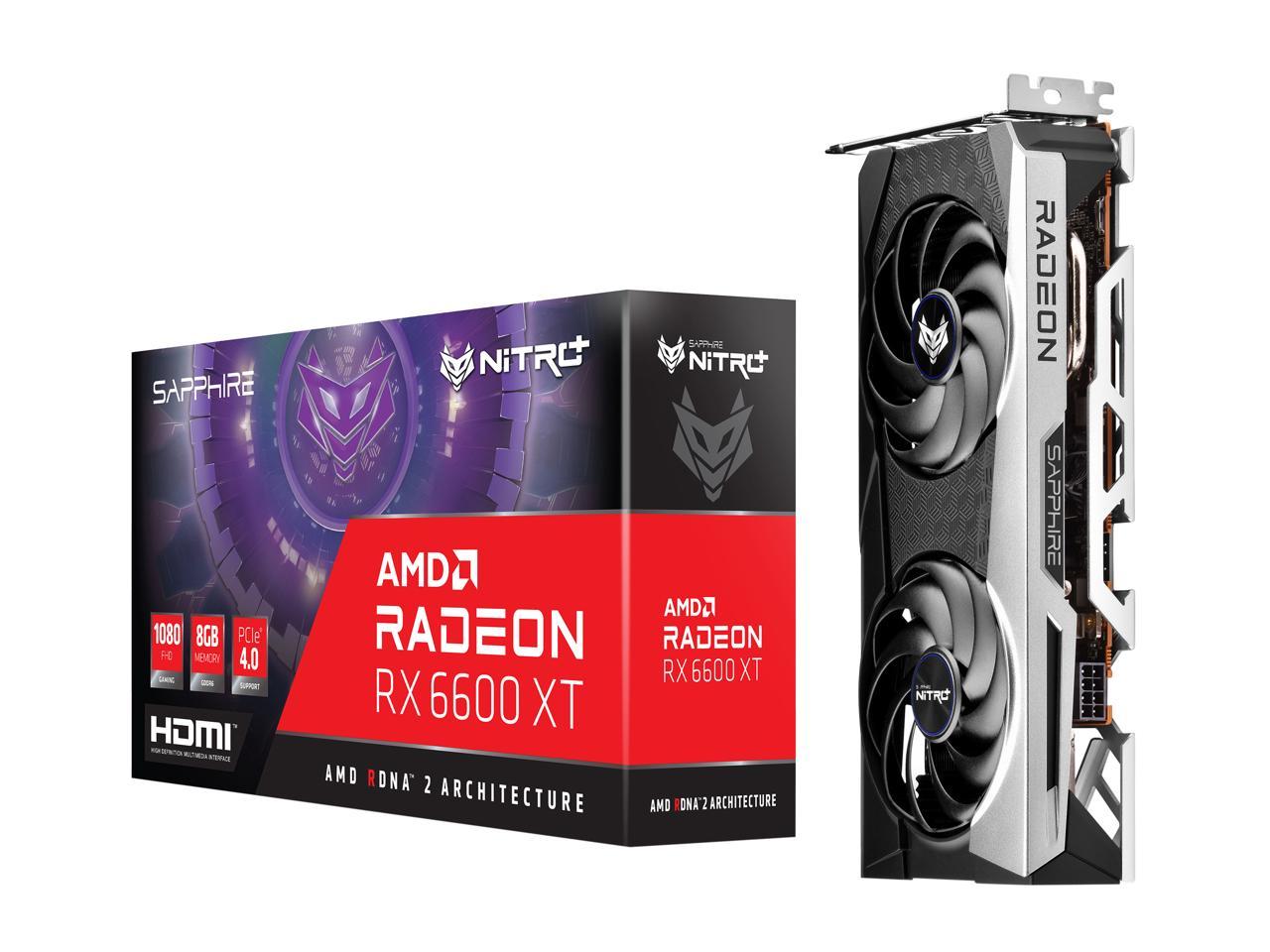 The AMD Radeon RX 6600 XT is engineered to dominate 1080p gaming. This PCIe 4.0 card is powered by AMD RDNA 2 architecture, and incorporates an array of advanced technologies to optimize your gaming experience by sharpening images, reducing input lag, and minimizing frame tear.

This SAPPHIRE Nitro+ model is factory-overclocked to 2428 MHz Game Clock / 2607 MHz Boost Clock (2359 MHz / 2589 MHz for reference card). With dual powerful yet quiet fans on the front, a reinforcement backplate, and an eye-catching RGB illuminated logo, this card powers your next dream build that stands out in every way.

Switch from performance mode to silent mode or back using our TriXX software for a quick and easy switch between your dual BIOS modes.

Personalize the look of your NITRO + card with its built-in ARGB.

The WAVE Fin Design reduces friction when the wind goes into the fin module resulting in a reduction of the wind cut noise.

The new hybrid fan design combines the quietness of a traditional axial fan design and strong air pressure of a blower fan design to generate an improvement in the downward air pressure through the fan while keeping the fan noise low.

Robust VRM Cooling and independent memory thermal modules work in tandem to remove heat efficiently and effectively across all sections.

Overall Review: With the GPU shortages was very happy to score this on NEWEGG Shuffle on launch day. Used this GPU to upgrade my wifes rig. So far the GPU runs great. The 6600xt give you equal to or better then a 5700xt depending on resolution. At 1080p its faster by 8-11% on average. At 1440p it trade blows vs the 5700xt wins some loses some or ties but does it at way way less power consumption. The SAPPHIRE nitro+ offers great cooling, cool LED that can match case lighting if setup, it offers very high clocks for a 6600xt while still only needing the 1-8pin power plug. Cooling is great (the 6600xt is an easy GPU to cool). Like most of you trying to get a GPU, let alone close to MSRP in these times is tricky. Im very fortunate. Over this card preforms extremely well. Me and my wife both game at 1440p on 165hz. So we go from PUBG, Fortnite, Apex, POE, D3, fall guys, valheim, Minecraft we bounce around. Her GPU was lacking before but trying to get any GPU near MSRP has been tough. This GPU gave her a huge uplift, and combined w Newegg shuffle got it a a great price. Overall long short. Great GPU if you focus on rasterization performance. Very power efficient, and runs extremely cool. Give you better than 5700xt at 1080p and trades blows at 1440p. So my wife rig going from 1060 3gb to this have a huge boost. Like all you out there good luck scoring a GPU at reasonable price/markup in these times its a battle out there If you are gaming at 1080/1440p this is a great GPU. Great clocks, cooling and LED on the Nitro+.

Cons: None I can think of so far

Overall Review: I bought this to upgrade my dying 290x that kept crashing my old rig and since I was building a new rig needed a more reliable and modern GPU. Using userbenchmark to score my new build comparing my old gpu and new gpu I get a 51% performance increase and it is very noticeable while gaming. Price is a little high but comparing it to the scalper market it's a steal at MSRP. Once the rest of the current gen cards go back down (if they ever do) the price might be a bit high. Would recommend this card at MSRP if you are upgrading from older gen GPUs.

Pros: Very Lightweight! Fans stay OFF in default Bios mode until 50+ C 1080p pro! Card design is an A+ for me Delivery ETA was on point! (Nothing to do with the product itself, yeah, but a plus regardless)

Cons: Just a smidge of coil whine, because thats honestly the only thing I can think of thats wrong with this card

Overall Review: Coming from a heavily used RX 570, this card is crazy! The 570 I used had fans running all the time, and they got pretty noisy, so the lack of fans on this card until higher temps is a yes please for me. I play on 1080p, VSYNC for 144Hz, and so far everything Ive thrown at it has been at that 144 mark, no stutters. As Im writing this review the day of installation, realizing problems may occur later, but first impressions are awesome! For those interested, my specs: Ryzen 7 5700G 16GB DDR4 @3200MHz MSI MPG Gaming Plus Mobo 550 Watt Bronze+ PSU 2 M.2 Samsung SSDs and an RX6600XT, obviously. So far the only game thats brought framerates maybe below 144 is DCS Steam edition, using default graphics settings (whatever those are, I barely know how to fly in the first place) as for the other two games Im mainly playing, they are not super demanding, the games being R6 on very high and War Thunder(who plays that game? Me apparently) on Movie+ quilty (not SSAA for anyone who plays WT and is wondering, that setting drops it to ~80 when still on movie, but hey its rendering in 4k so understandable.) Oh also apparently the Sapphire logo lights up! I didnt know that until I hit the power button but yeah it looks great. The photos for this card make it look like the backplate is solid white, its actually a reflective silver/aluminum, looks nice at night in the dark with RGB above it. Also matches my tower cooler. Youve made it to the bottom of the review! Congrats on reading the word vomit. First big purchase thru Newegg, dont regret it at all.

Overall Review: not regretting buying it so far

Pros: Great quality and design. Very efficient card wattage wise. I would put this card on par with my ROG Strix 6600 xt. Theyre very similar in quality. Has Argb header for you rgb lovers.

Daniel K.
Ownership: 1 month to 1 year
Verified Owner
Welll priced for the current market and amazing looks and performance1/20/2022 8:39:09 AM

Overall Review: See title. Packaging and install were good, too.