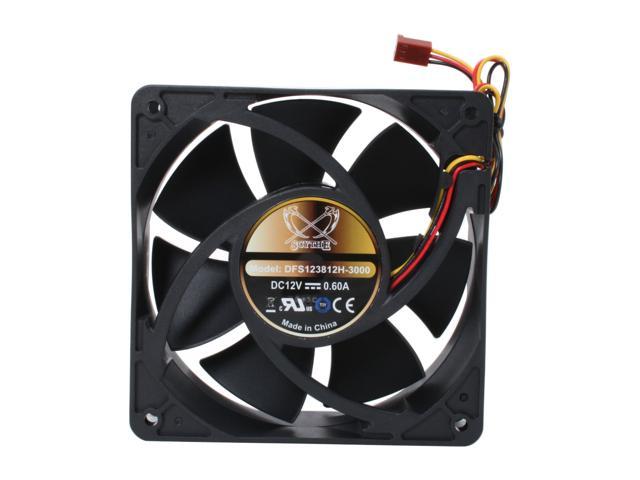 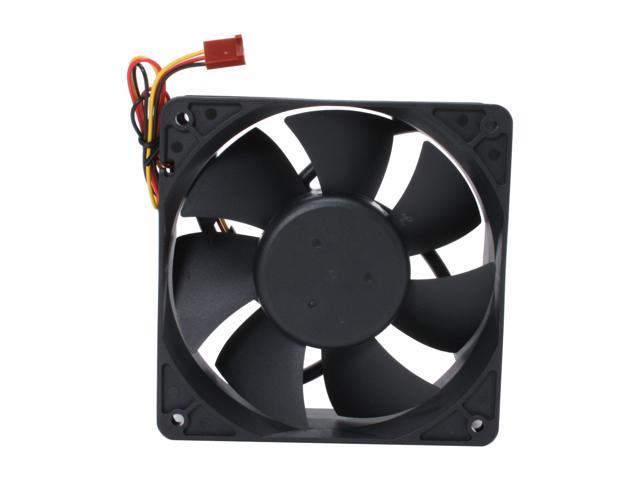 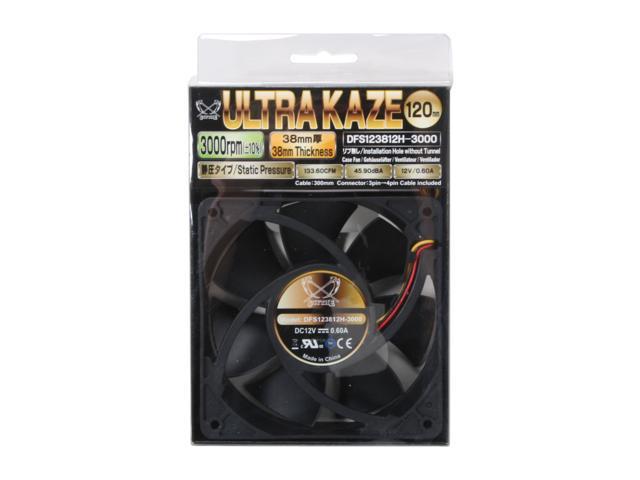 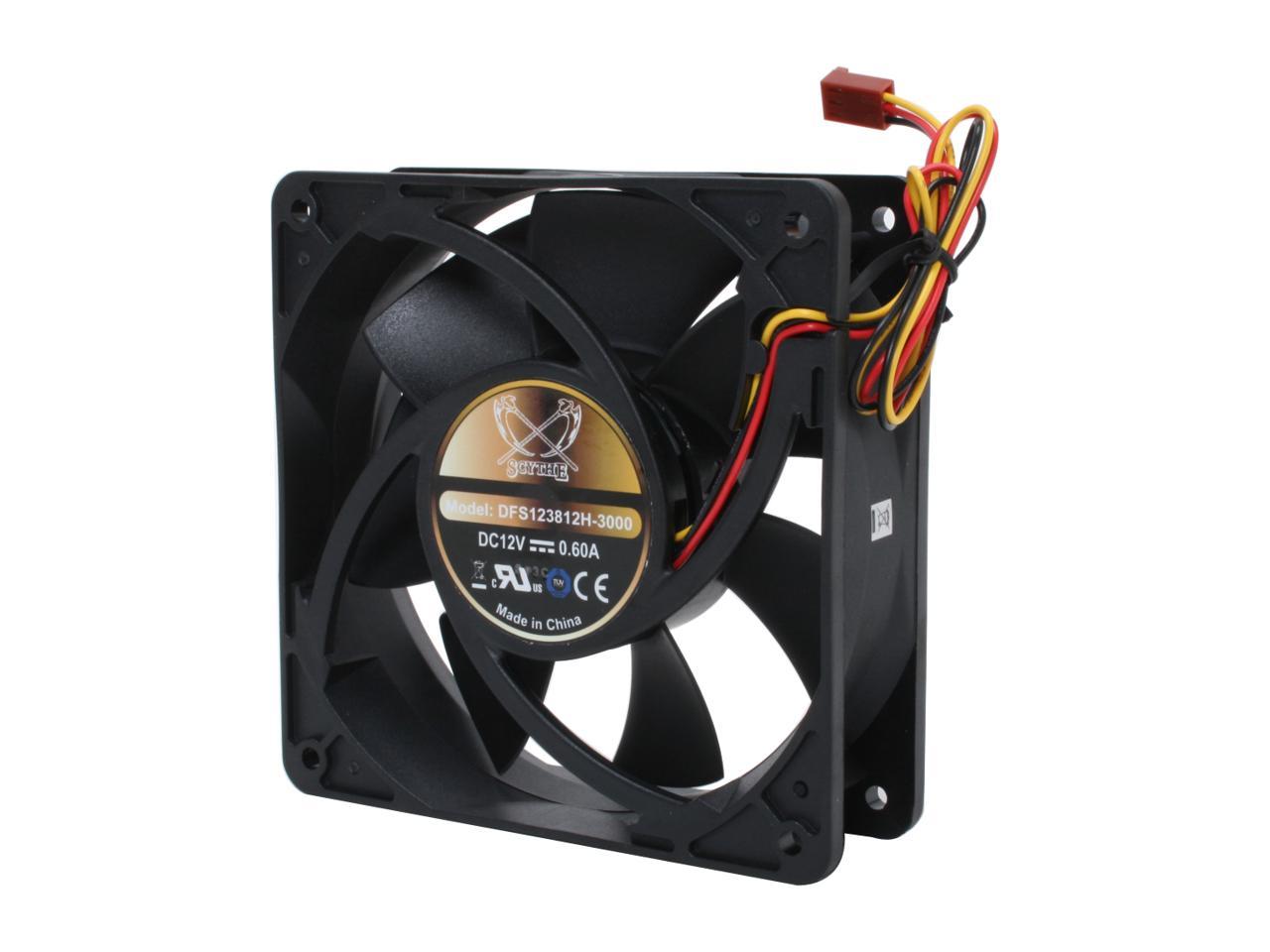 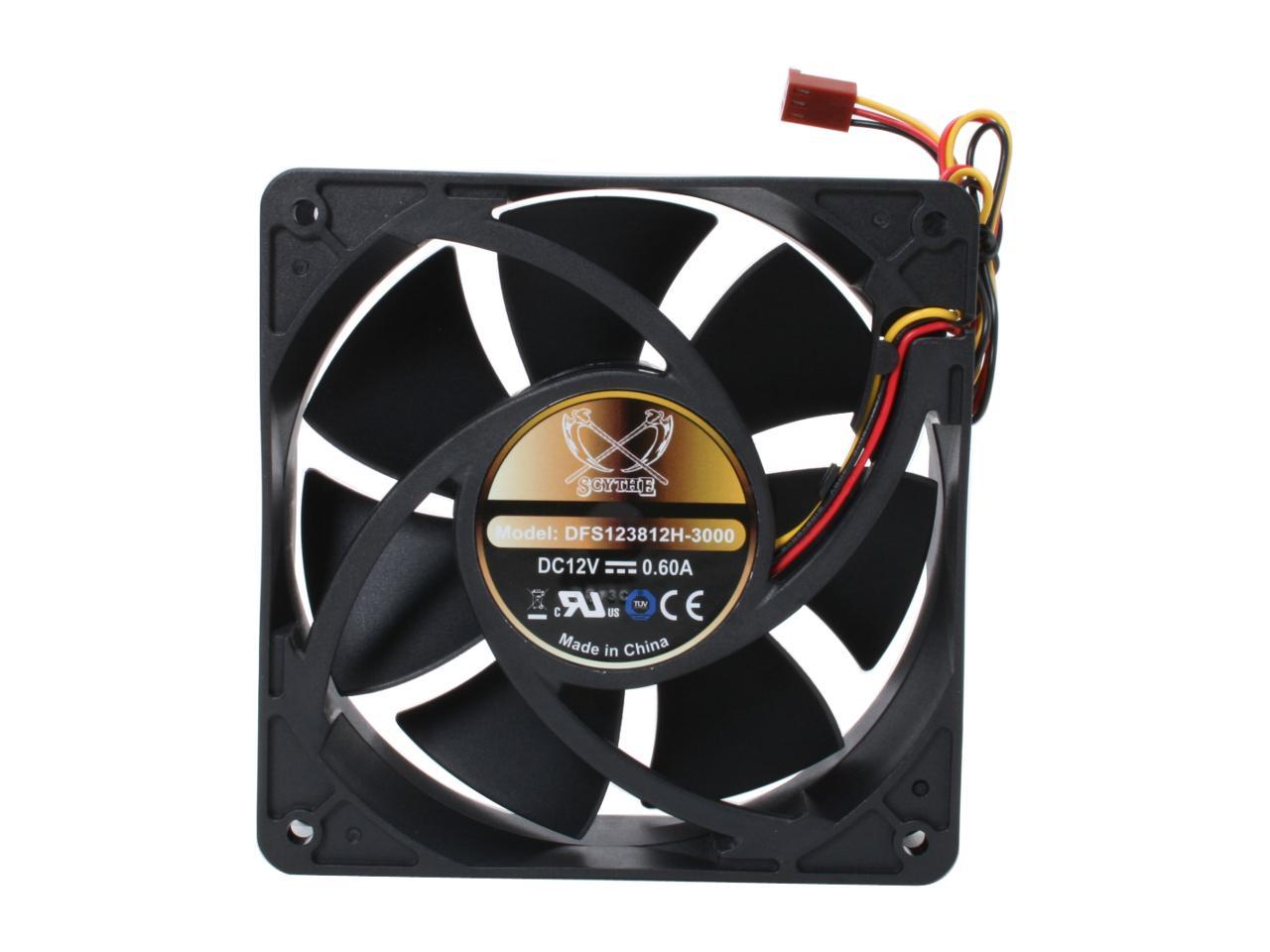 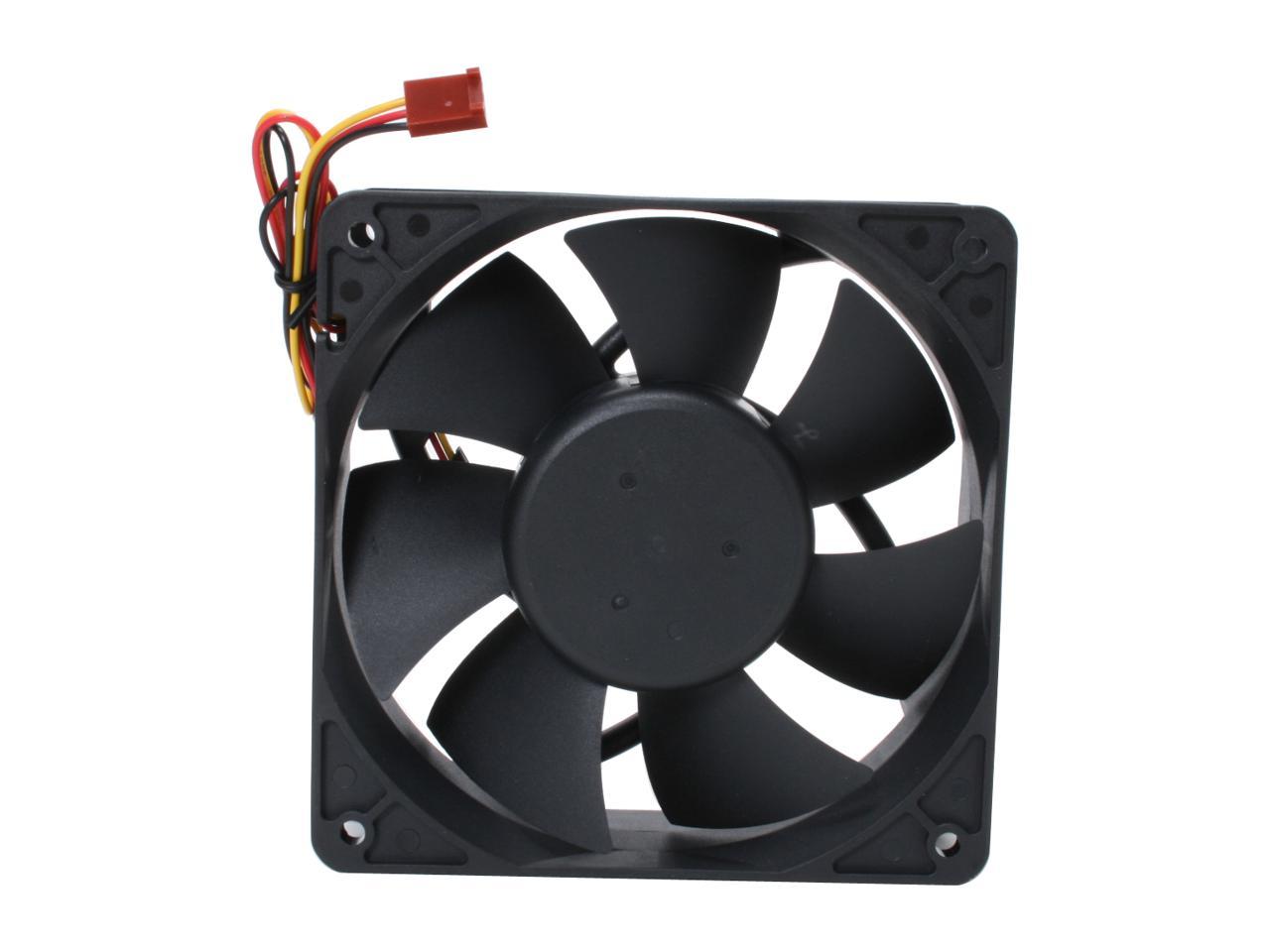 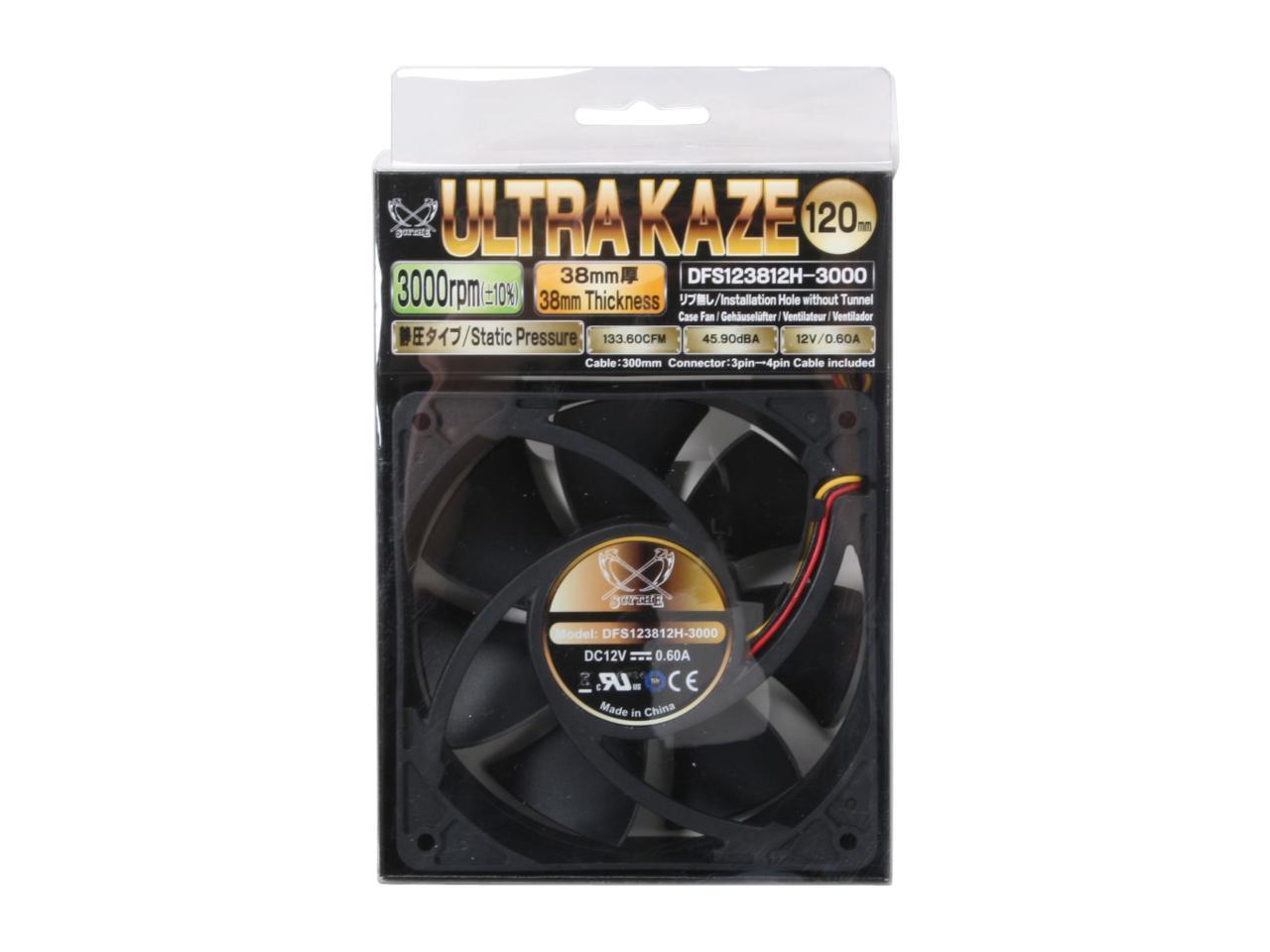 Pros: Moves a decent amount of air without too much noise; fairly cheap

Cons: Doesn't move as much air at full power as I expected, but it is also quieter than I expected so I figure it balances it out.

Overall Review: Using this on a fan controller as my case's main exhaust; seems to be doing well so far. We'll see if it's still running in 1-2 years...

Pros: Piece of cake to install, as most fans are. Plugs directly into motherboard with 3-pin connector, which (in theory) allows you to adjust the speed anywhere from 0-3000 RPMs. 3000 RPM fans ain't no joke. This thing is a freaking tornado. Blows as hard and as loud as one too. The noise isn't too bothersome. It's definitely noticeable going from a near silent fan to this though. You get used to it after the 3rd day though.

Cons: I would put the noise it makes here, but that's to be expected from a 3000 rpm fan. No cons so far.

Overall Review: I tried to use SpeedFan to adjust the fans speed, but it didn't work for some reason. It's recognized in SpeedFan, shown as spinning at around 2990 rpm, but the speed is unchangeable for some reason. It's probably something to do with my mobo. I'll have to look into it some more.

Pros: ...Title explains... Had it for 2 years as a rear exhaust. Still kickin'. If you have a baby or a small child and they put there face near this, There cheeks will flap.

Overall Review: Luke, I am you faatthherrrr.. Try that with this fan... :) Had this thing taken apart, lubed it up. You really don't have to but probably drops the dba by one. Just prolongs the fan. I've always had Scythe fans in my case. I don't knock an egg off for them being loud. I knew that when I bought them. Surround sound drowns them out. Also drowns out the lady. :)

Pros: I just installed this baby on my TRUE120 Extreme, and this thing keeps it so much cooler than my previous Scythe S-Flex! It took my i7 idle temps (3.8Ghz) from 42C to 33-35C. JUST FROM INSTALLING A FAN!

Cons: Not a problem for me, but noise may be a problem for some people. You can always turn the RPM's down. NOTE: Don't stick your finger in the blade. It took a hunk of skin from me :(

Overall Review: I keep my RPM at 3000 because it provides the best cooling and isn't loud enough to be bothersome for me. My PC sounds like it's about to fly away O_O

Pros: Amazing drop in temps. I put on my case door that has built-in vents. This fan is crazy fast and lowered my temps 10c-20c for almost all of my components. My CPU's temps are now 20c lower and my Adaptec 5445 RAID card (that outputs insane heat) is down 20c as well. My motherboard and hard drives also dropped some good temps too.

Cons: Very Loud. Sound really does stand out. I knew this before I bought it so I'm not complaining. Obviously, a fan that has this kinda speed and CFM is going to spin fast and make some noise.

Overall Review: I have other Scythe fans and they are silent so I know Scythe had no choice but to let this fan make some noise. Reminds me of when you walk into a data center. All you hear are noises just like this. After a while you just get used to it like it's part of your environment now. You can't buy expensive CPU's, $1000 dollar RAID cards and expensive hard drives without having cooling them down. So many things can go wrong. From parts going bad quick, dying early and/or reducing their life span. My next build might just be water cooled since I don't want to have 4 of these fans running in the same room. Then it my be annoying. I can tolerate one since I know it's keeping my investment safe.

Cons: They are 5 years old and still work so none

Overall Review: I used 4 of these in a server build 5 years ago. I have not had a single failure! This is even with the server sitting in a small closet. They are connected to a fan controller and they only spin at 1100 RPM most of the time. This seems to be less then half of their operation speed. Even at a low RPM they move alot of air. This is good because it is almost silent!

Pros: Very high amount of airflow. One of the most effective I've found for droping temps of a case without droping a lot of change.

Cons: You must have room to mount this, almost double the thickness of a standard.

Pros: pumps a lot of air! and they are quite if you turn down the speed!

Cons: when on full blast my case flies around the room like an airplane, cause i have 2 of these things, so be careful ;)