Purchases from these Sellers are generally covered under our Newegg Marketplace Guarantee.
357 Ratings (73% Positive)
Sold and shipped by: Mac Marvel's MarketplaceContact Seller
Ships from United States.
357 Ratings (73% Positive)
On-Time
Delivery
80.39%
Product
Accuracy
78.71%
Customer Service
Satisfactory
74.17%
View All Seller's Reviews
This item is currently out of stock and it may or may not be restocked.
Out of Stock
Add To Wish List 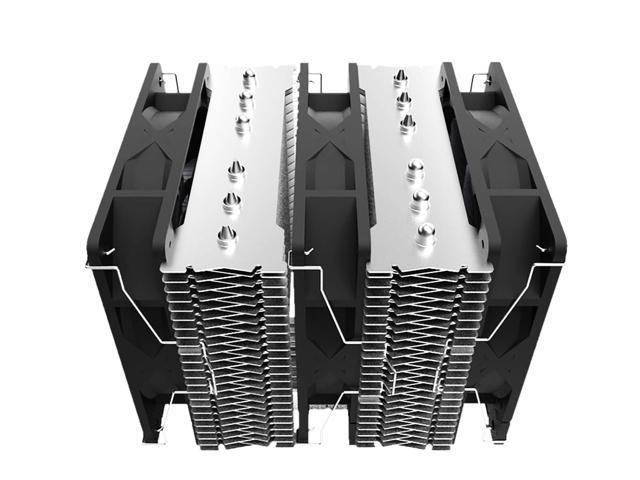 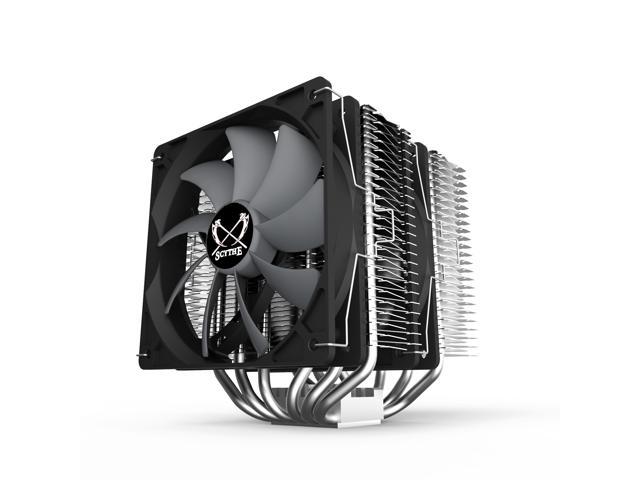 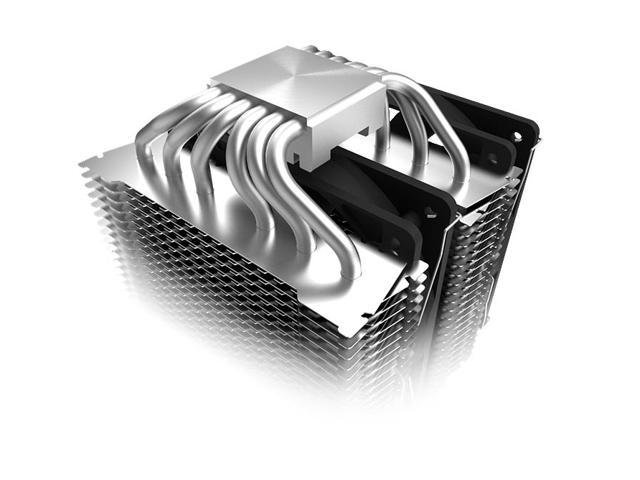 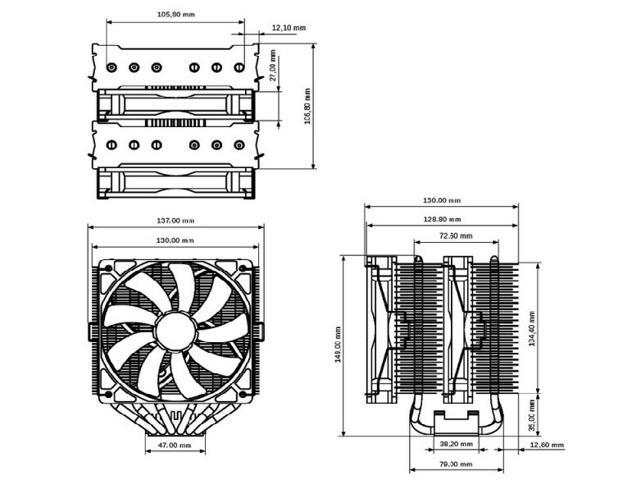 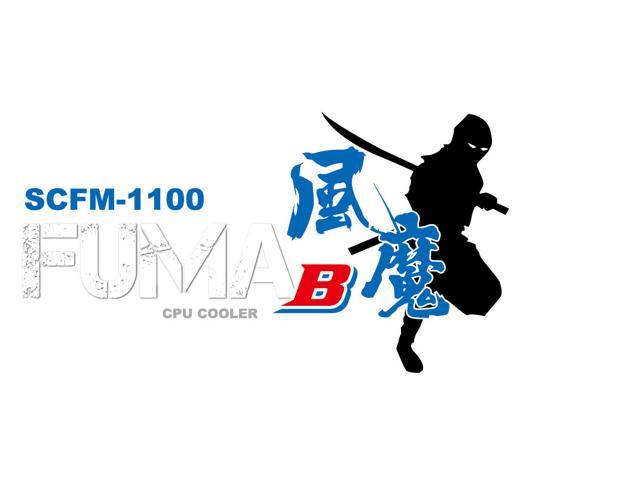 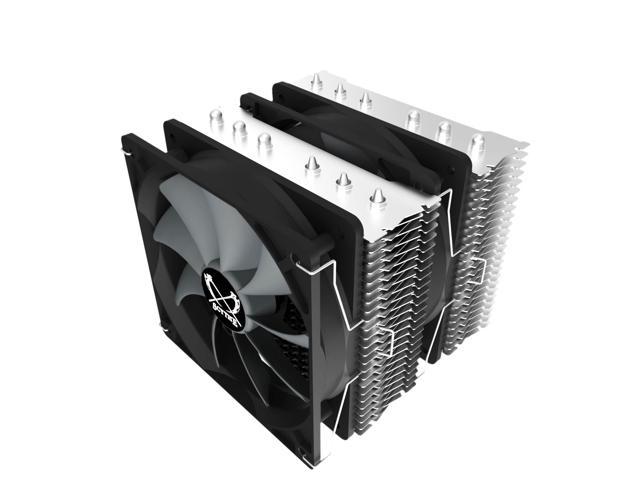 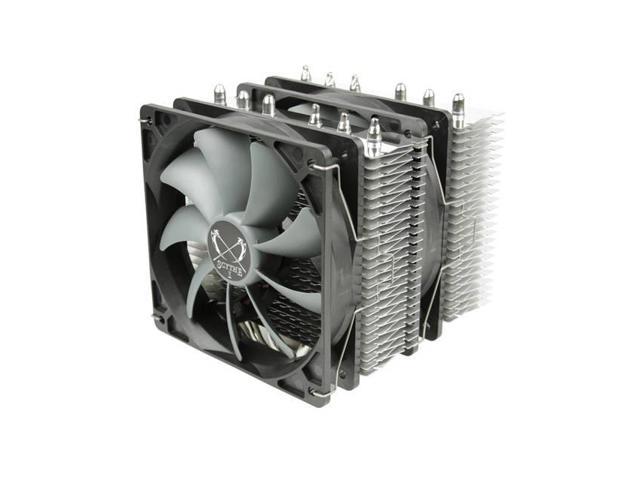 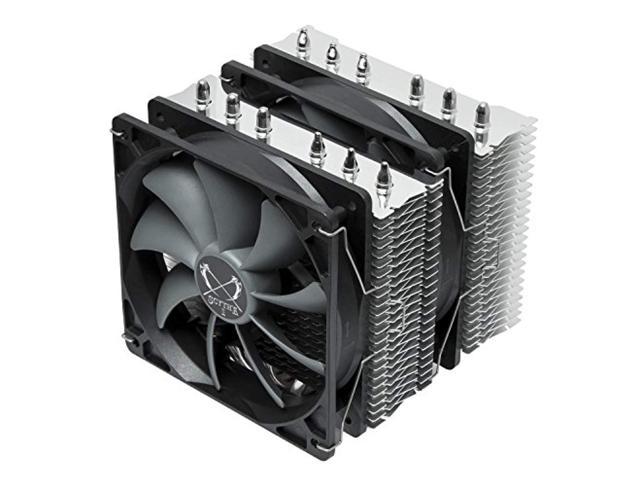 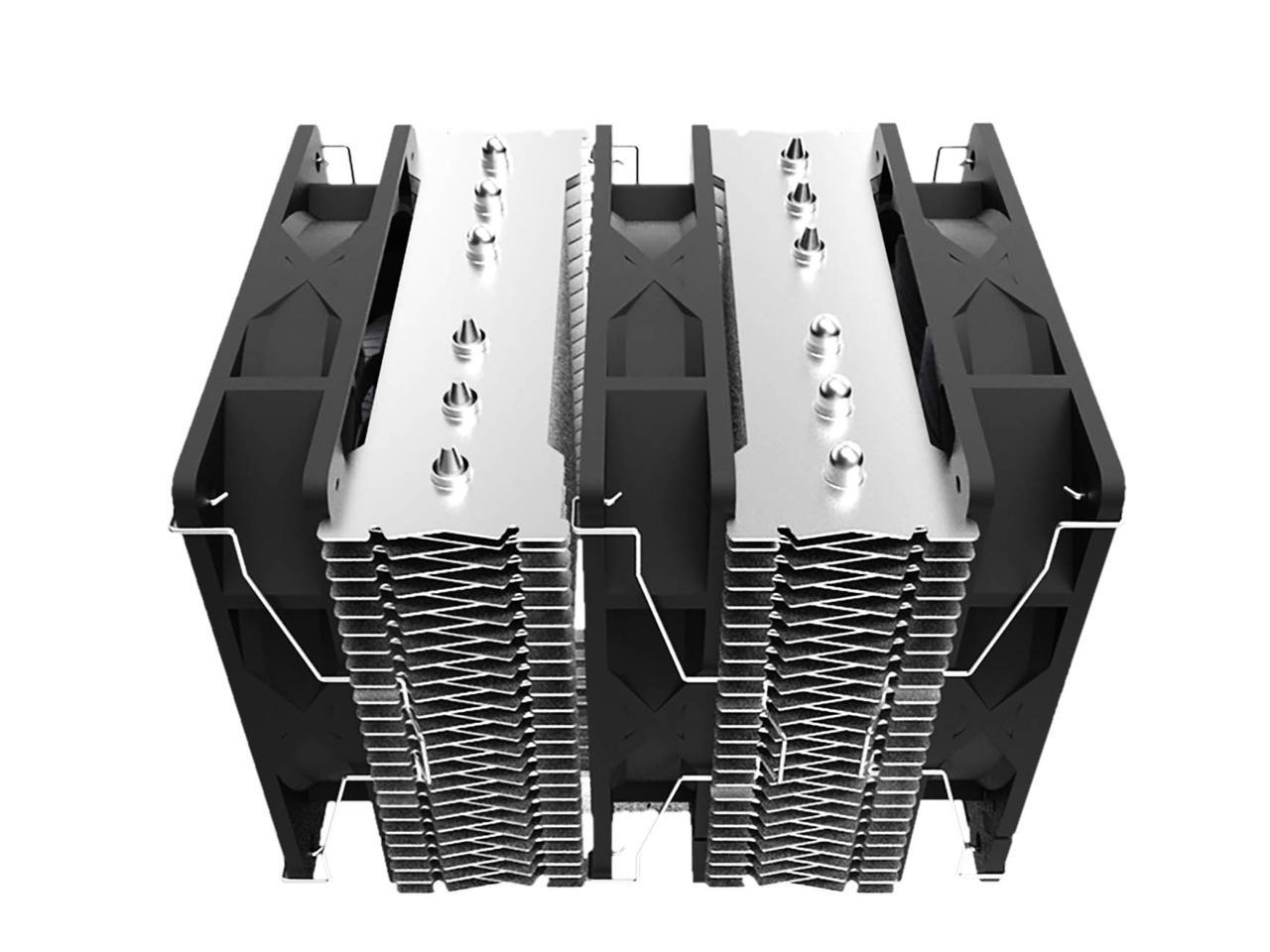 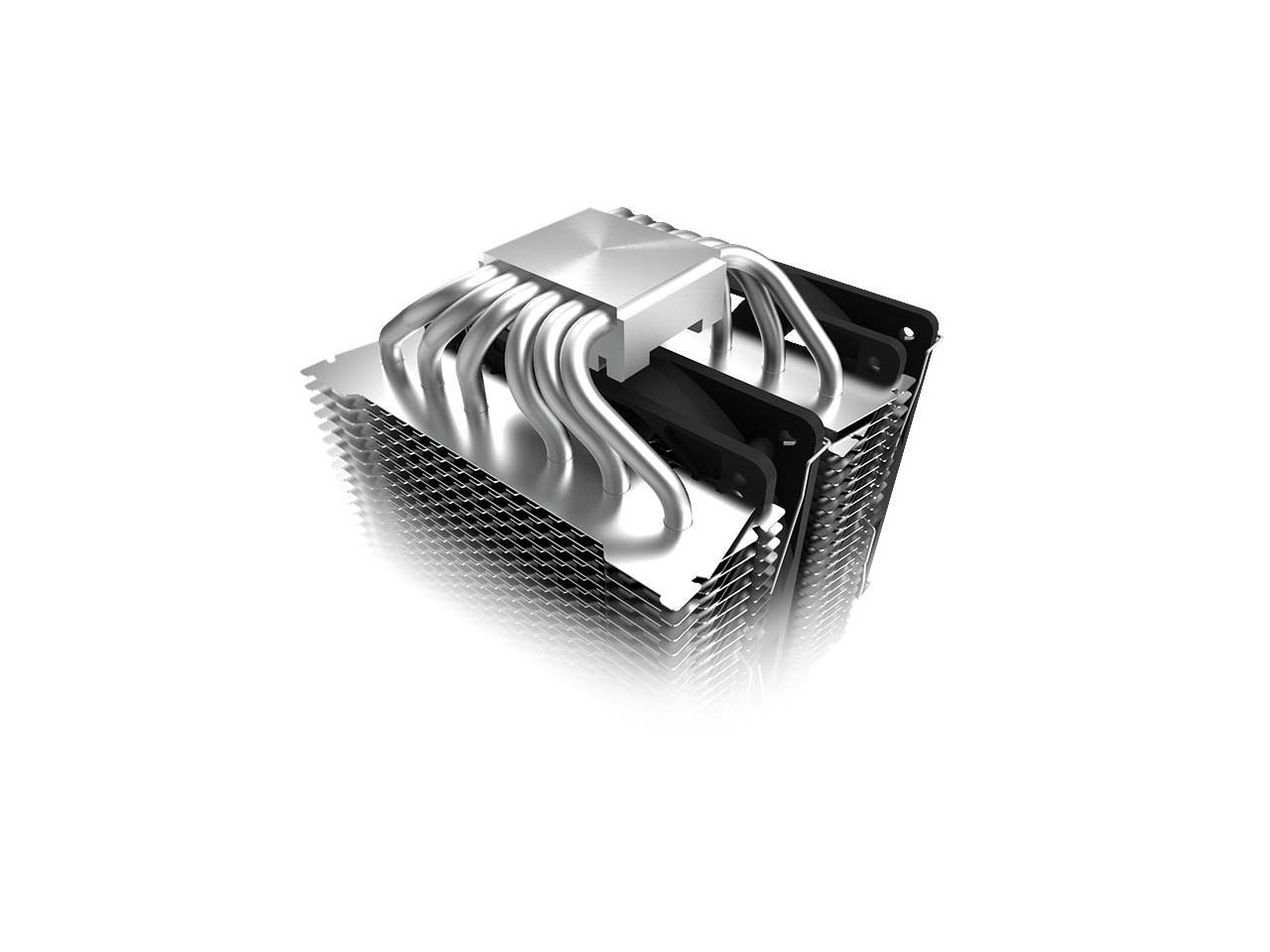 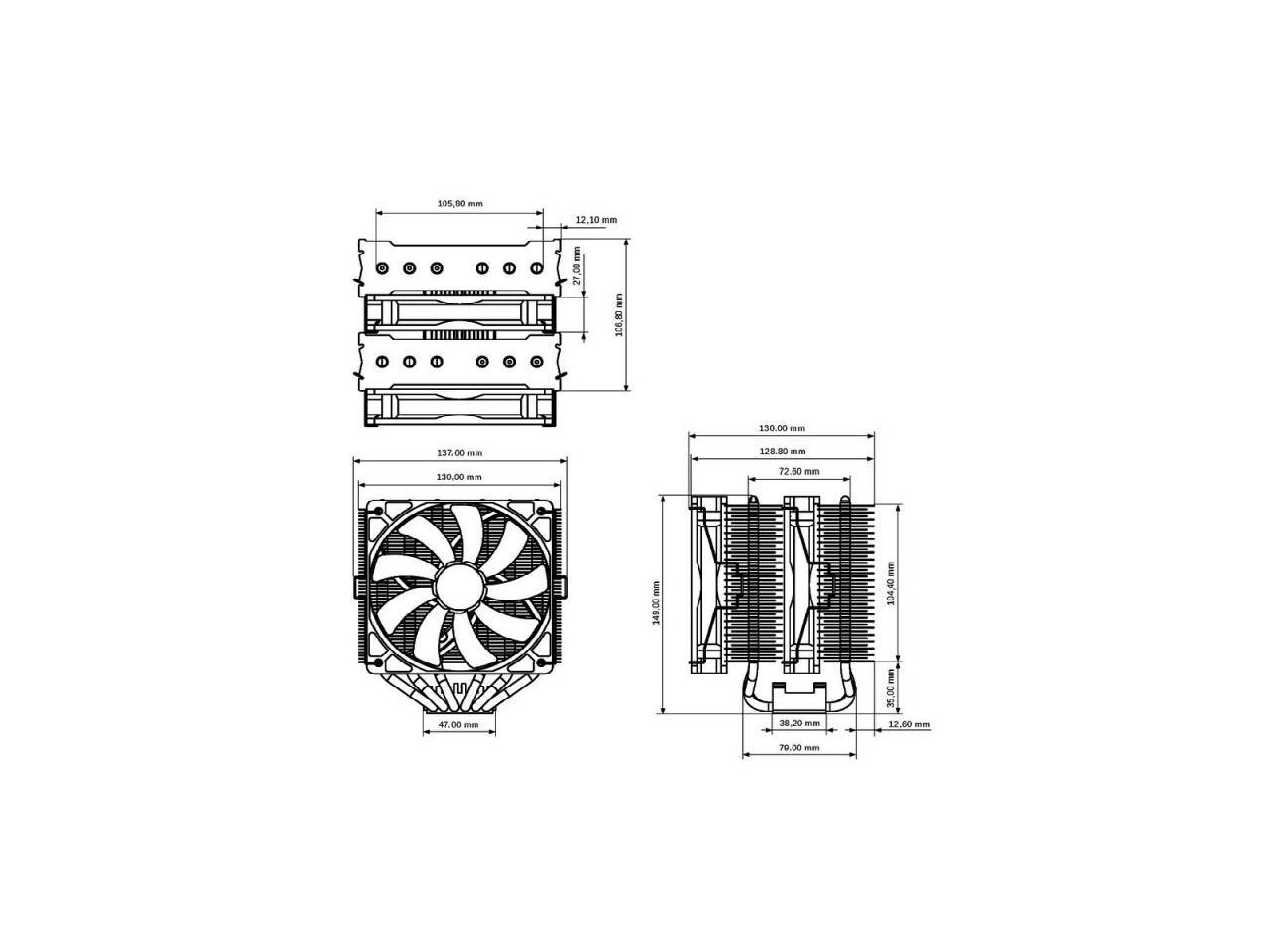 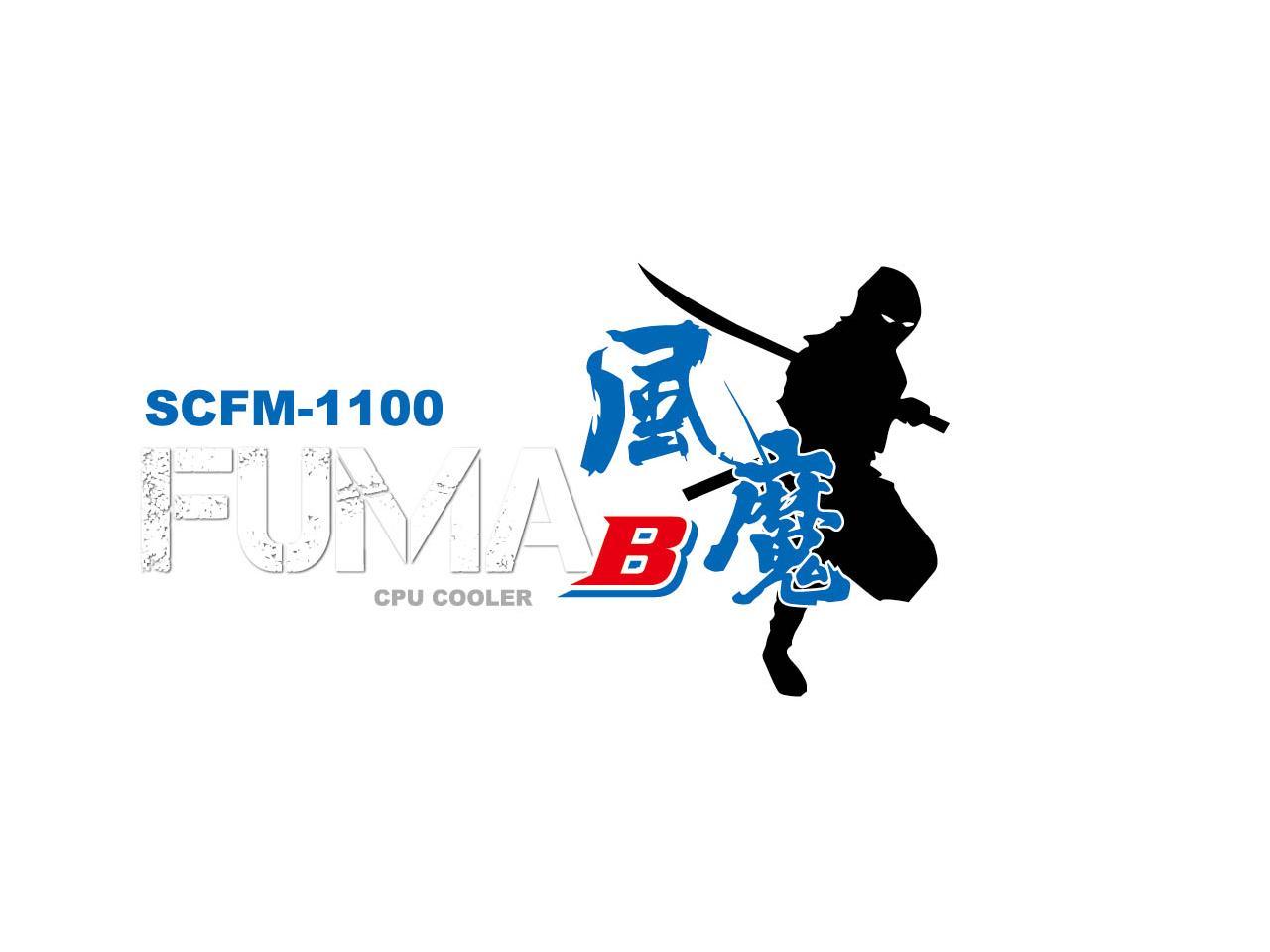 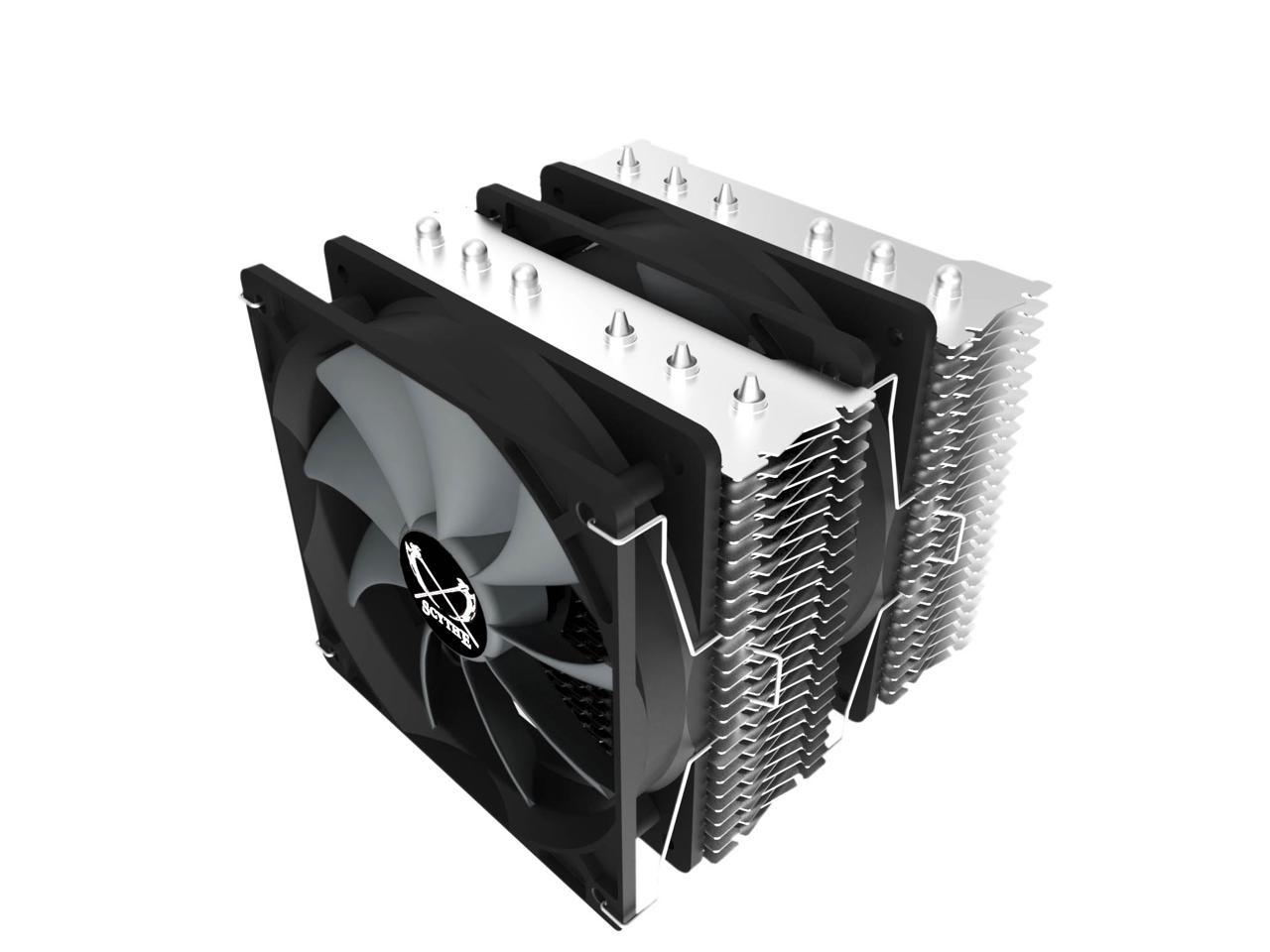 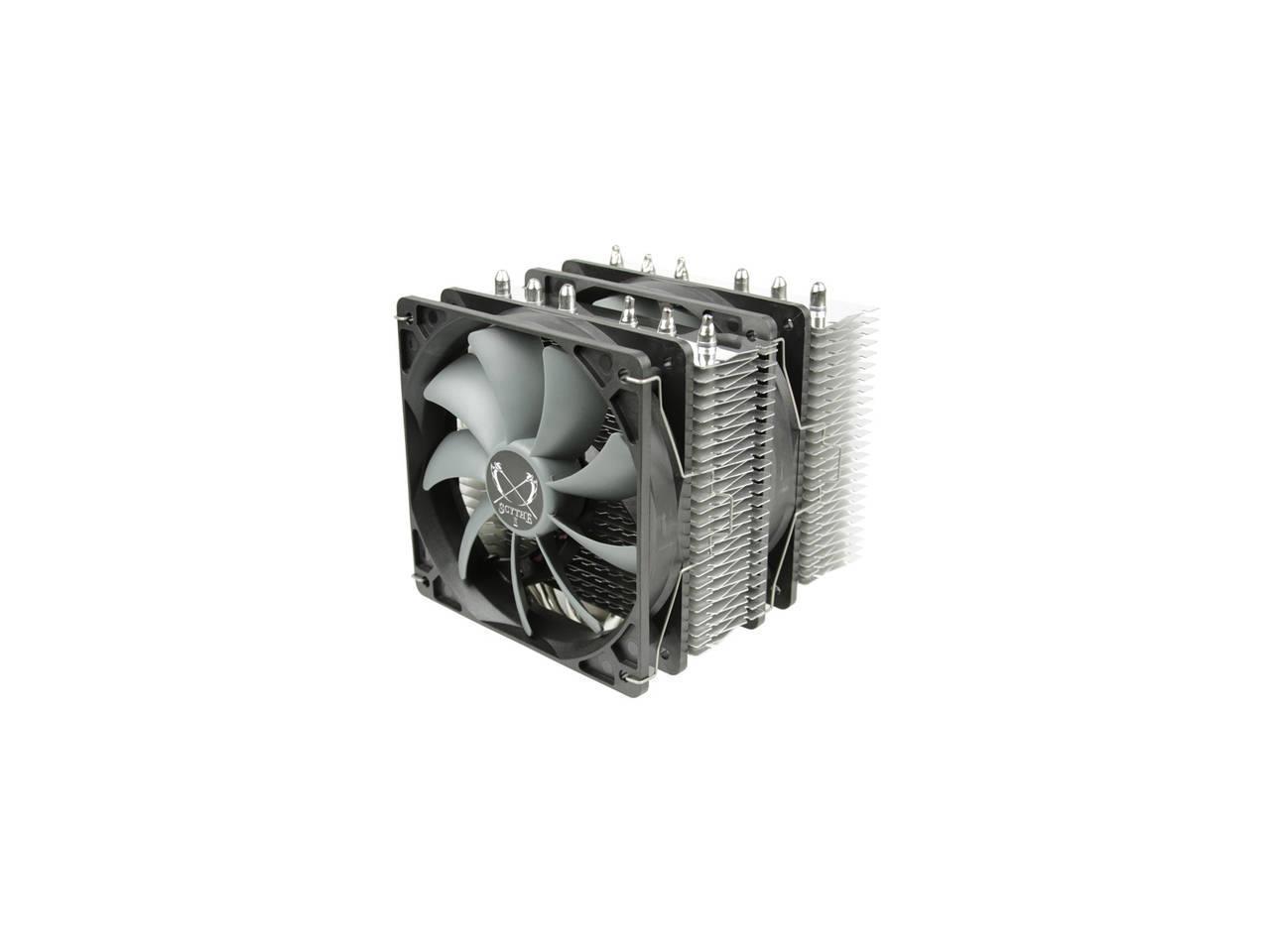 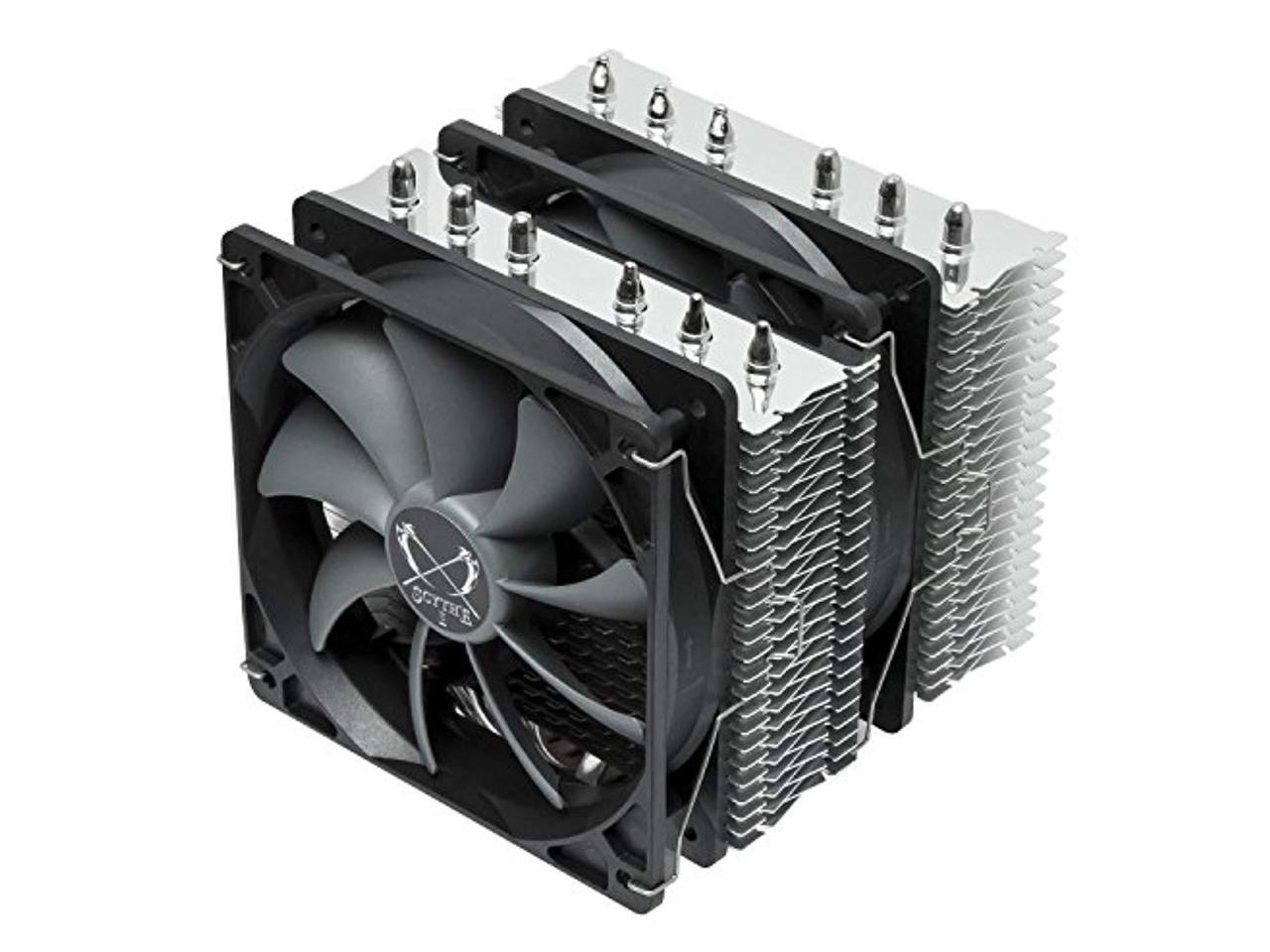 (12) Write a Review
OUT OF STOCK.
Ships from United States.
Most customers receive within 4-8 days.
LOADING...
Overview
Specs
Reviews Tracing its roots back to renowned Mine 2, Fuma was kept smaller without sacrificing performance. Countless hours spend on testing and optimizing formed a cooling device measuring 149 mm in height. To compensate the smaller surface, our researchers put a great deal of effort in tinkering a new baseplate design as well as redrafting the fin structure. Putting considerable effort in optimizing these two areas, a new twin tower CPU cooler with compact measures providing high-end performance was created. Fuma is made of two towers connected via six heatpipes to the baseplate. The twin-tower structure prevents mutual heating of the heatpipes while enhancing heat dissipation to the fins. FUMA is designed for the use of up to three fans to generate maximum airflow. Included with Fuma are two Slip Stream fans, a series valued by its' customers for many years. It is characterized by its' small fan hub enhancing the air flow. Overall Review: 10/10 would by it again, especially if i can find a way to get it attached to my Dual Socket G34 board!!

Cons: The size causes it to block off one of my memory slots, had to move fan up on the heatsink to allow clearance for a second slot.

Pros: Easy to install, sturdy, holds onto the cpu/mobo tight enough (yet gentle). Most importanly, it keeps temps really cool - running prime95 when ramped up, the temps only got into the 50s. It's huge.

Overall Review: Not a con as this could also have to do with my mobo size, but the outer fan covers one of the slots for the RAM, so it has to come off (just the fan) to take the RAM stick out. No biggie. This is a replacement for a CM EVO 212 I had that didn't quite fit correctly (even with the X bracket for the AM4/Ryzens). Love this cooler and don't feel I have a need to go to water.

Pros: This is a HUGE cooler. I expect it to do a great job cooling my CPU it certainly is big enough.

Cons: - This is a HUGE cooler. Call it a rookie mistake, but I purchased it along with the ASUS PRIME Z370-A II LGA 1151 and when the fans are installed correctly, it blocks off 2 of the RAM slots. With the removable fans, I just mounted it slightly higher than the RAM chips and it seems to work fine. Just be aware of that. - Only minor gripe for those with any type of OCD. The sticker on the visible fan was slightly off. Its not noticeable before assembly, but once it spins, the fan blade appears like its wobbling. Its one of those things that if someone points it out to you, its all you can see.

Pros: this is the best cooler you can buy hands down , overclock.com did some testing and its right up there with the EK Predator AIO. i am overclocking my I5-6600k to 5.1GHZ at 1.512Vcore and the max temp in XTU utility is 79C , ambient temp is 72f. I have messed with many coolers within the couple past years but this one tops them all. It beats the NH-D15 for a fraction of the price. Along with almost all of the AIO's you can buy except EK. Which the temp difference is only like 1-2c I am also using 2 noctua fans and MX4 thermal paste.

Cons: You have to make sure you tightened everything very good when installing or else you will get lack luster results. That is the reason why some temp tests you see floating online isn't good. You dont have to worry about the heat sink bending skylake processors as this version has springs on the screws.

Pros: Obviously not a fair comparison based on the price, but that's the only thing I can compare it too. 212 evo @ 1.35-1.4v Ryzen @ encoding a 1080p handbrake video = 90c in the initial 5 minutes easy. Fuma hovers around 73c for the entire 20 minutes. Can still reach upto 80c from spikes though. Both at default fan speeds.

Cons: The quality isn't amazing. It seemed to be packed well enough, but I'm pretty sure no one quality controlled the actual product. The heatsink requires a little bit of re-bending if you want to be able to fit the middle fan in.

Overall Review: Using it to cool a ryzen 1600x at 1.35v mainly. My cable management is somewhat lousy due to cramped Deepcool Tesseract case, so I can't quite put the fan in the front area due to cables. It might have better cooling then. Lowest temp from cold boot is 32c. Lowest temp from pc being on a while is 38c. Temp measurements taken with hwmonitor.

Pros: This is an EXCELLENT product overall. I have a Ryzen 7 2700 and I did some testing with this cooler and was impressed by the value. At 1.4v and 4.2GHz, this cpu got up to a max of 73C after a 10 minute-all core stress test in CPU-Z. Granted, this is without the GPU dumping any heat into the case, but aside from rendering videos, it would seem rare that you would have the CPU at an all core load and the GPU making significant heat. Now normally this cooler is whisper quiet, but with this extreme test it spun up and got noticeably loud. I'm not really aware of any coolers that can really be that quiet at 1.4v on an 8c/16t CPU, so I'm not faulting it there. I did a render test of a 4k file using this CPU at stock speeds and an AORUS RX 580, and the max temp was in the low-mid 50s, all while staying very quiet. I also noticed that since this cooler keeps temps much lower than the stock wraith spire, the CPU was able to PBO to higher clocks for single thread performance in gaming. The stock clock is 3.2ghz, but I was seeing a consistent 3.75-3.9GHz in gaming which helped me get some higher frames. I was pleasantly surprised by that and was not expecting it. Another pro is that this cooler has good clearance. I have a Cougar MX330, a relatively shallow case, so I couldn't fit a Noctua or a BeQuiet in here because of clearance issues. This fit no problem.

Cons: It was a bit tricky to install the middle fan, I actually had to bend the cooler slightly to get it to fit. I thought that could have been better-designed, but it wasn't a huge issue at the end. Also, this is nitpicky for the $43 price tag, but this is sort of plain looking, almost industrial cooler. The one nifty visual thing I noticed is that if there is a light shining on the sticker, it makes different shapes depending on what speed the fan is going. I kind of would have liked to have had an illuminated logo or something on top of the cooler (even a simple white light that says Scythe or something), but if not including it was a cost-saving measure then I guess I support it.

Overall Review: Final analysis- excellent performance at a great price. Would recommend 10/10 times if you need an effective and inexpensive air cooler.