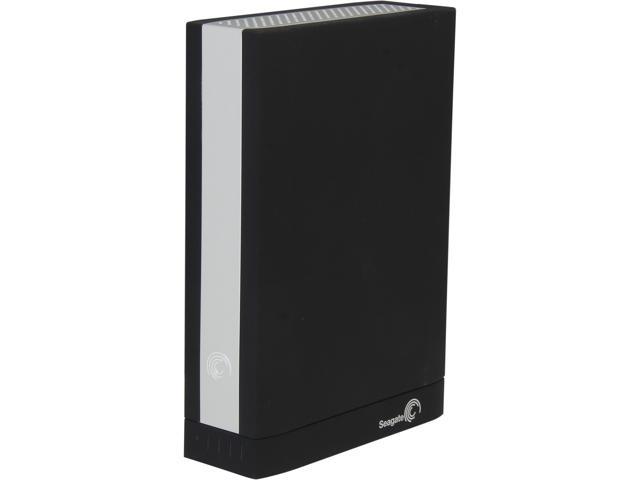 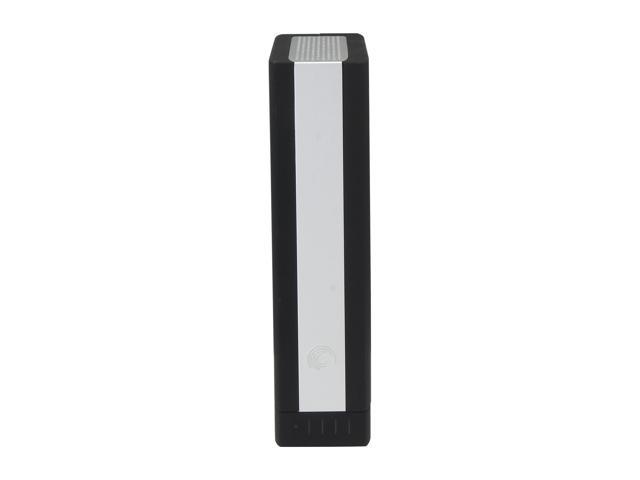 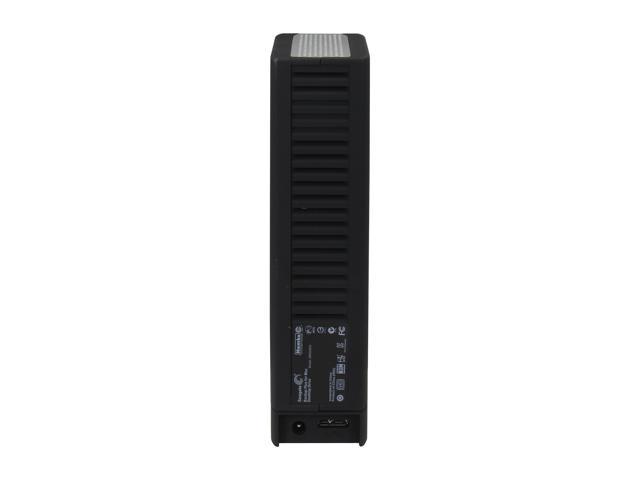 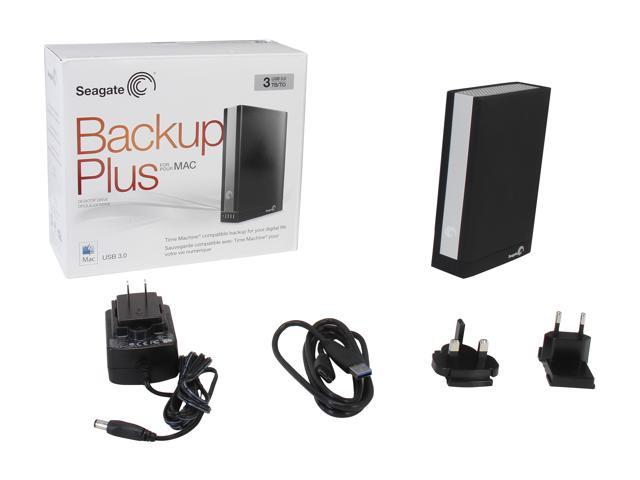 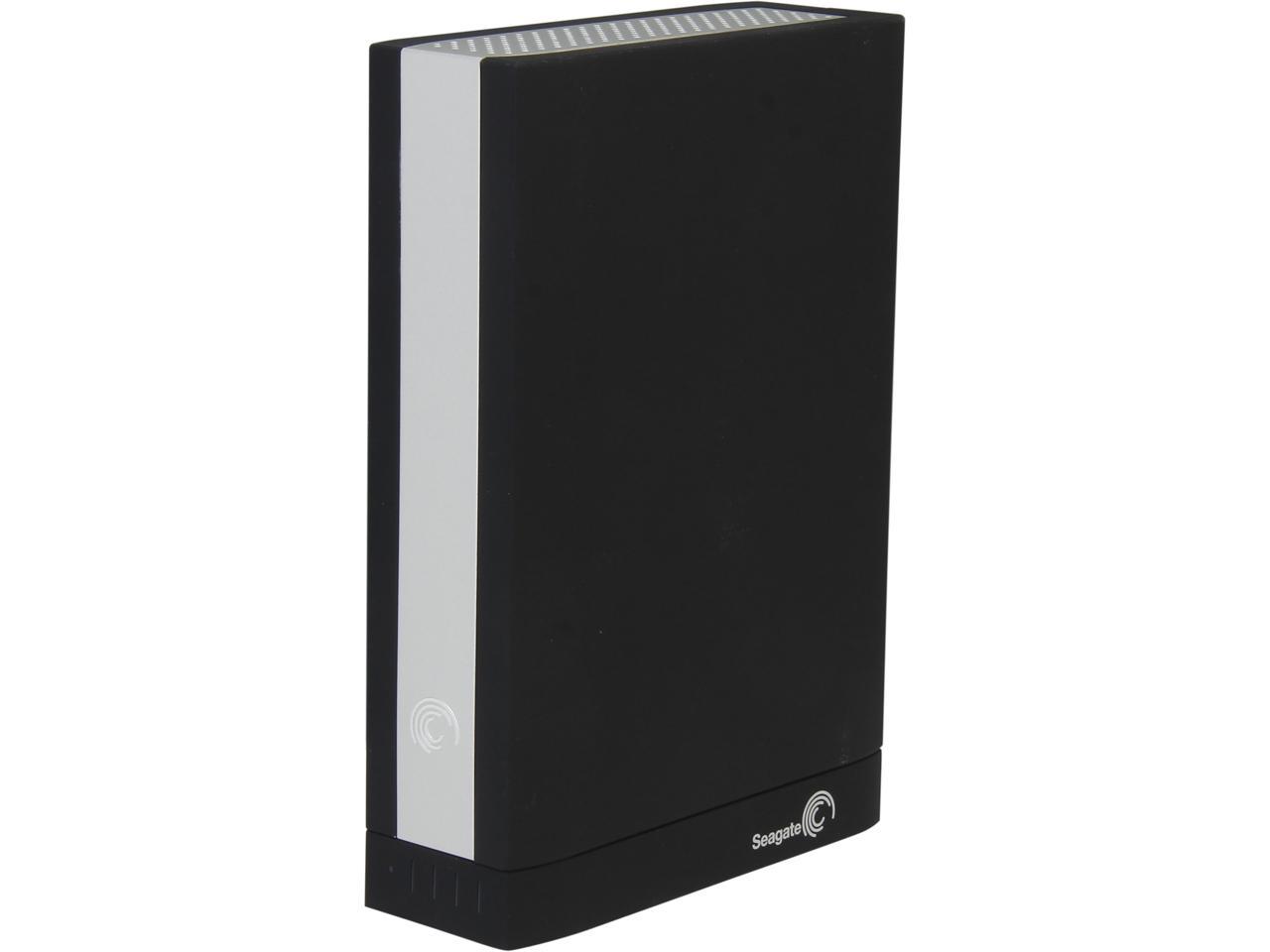 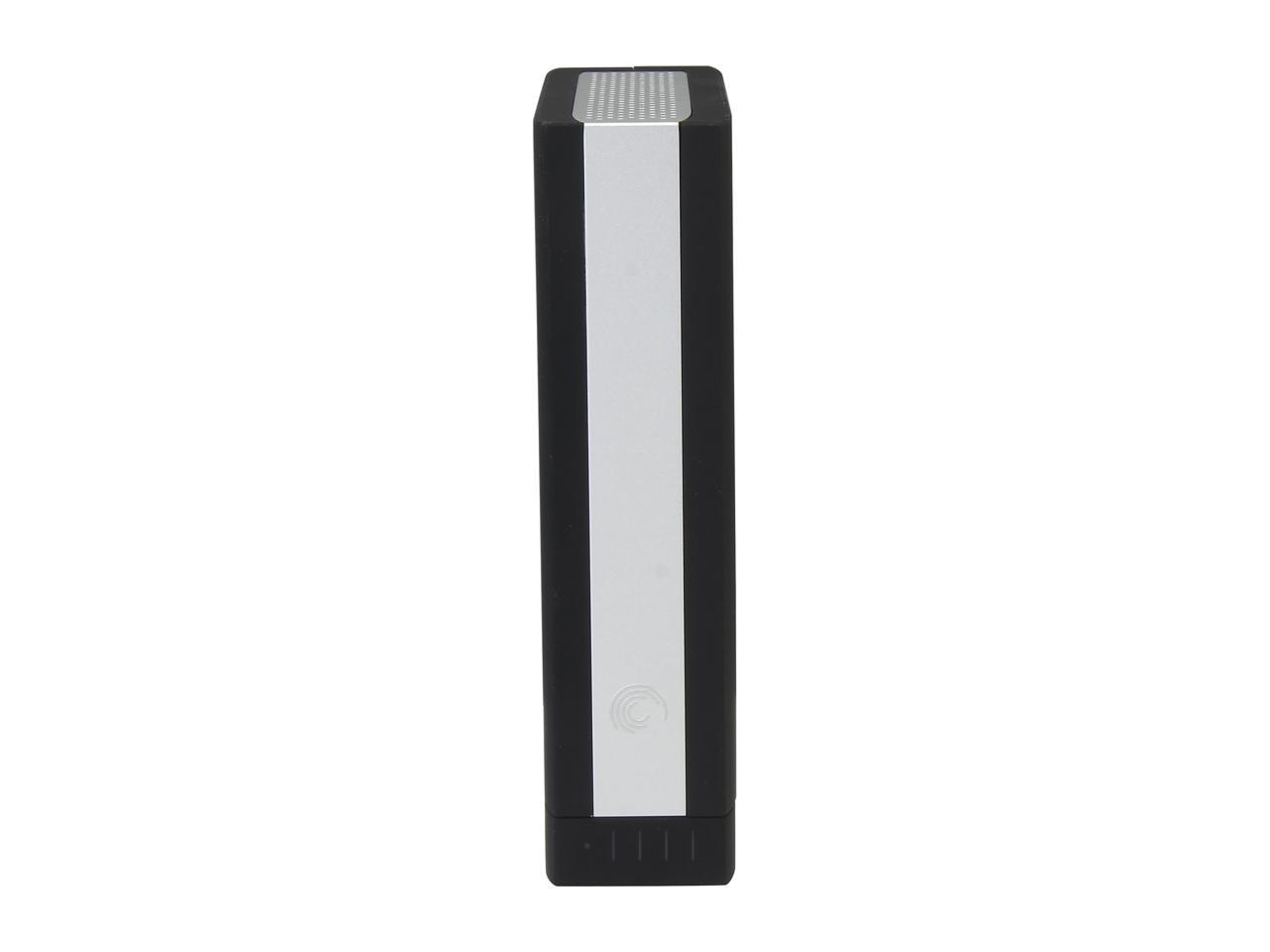 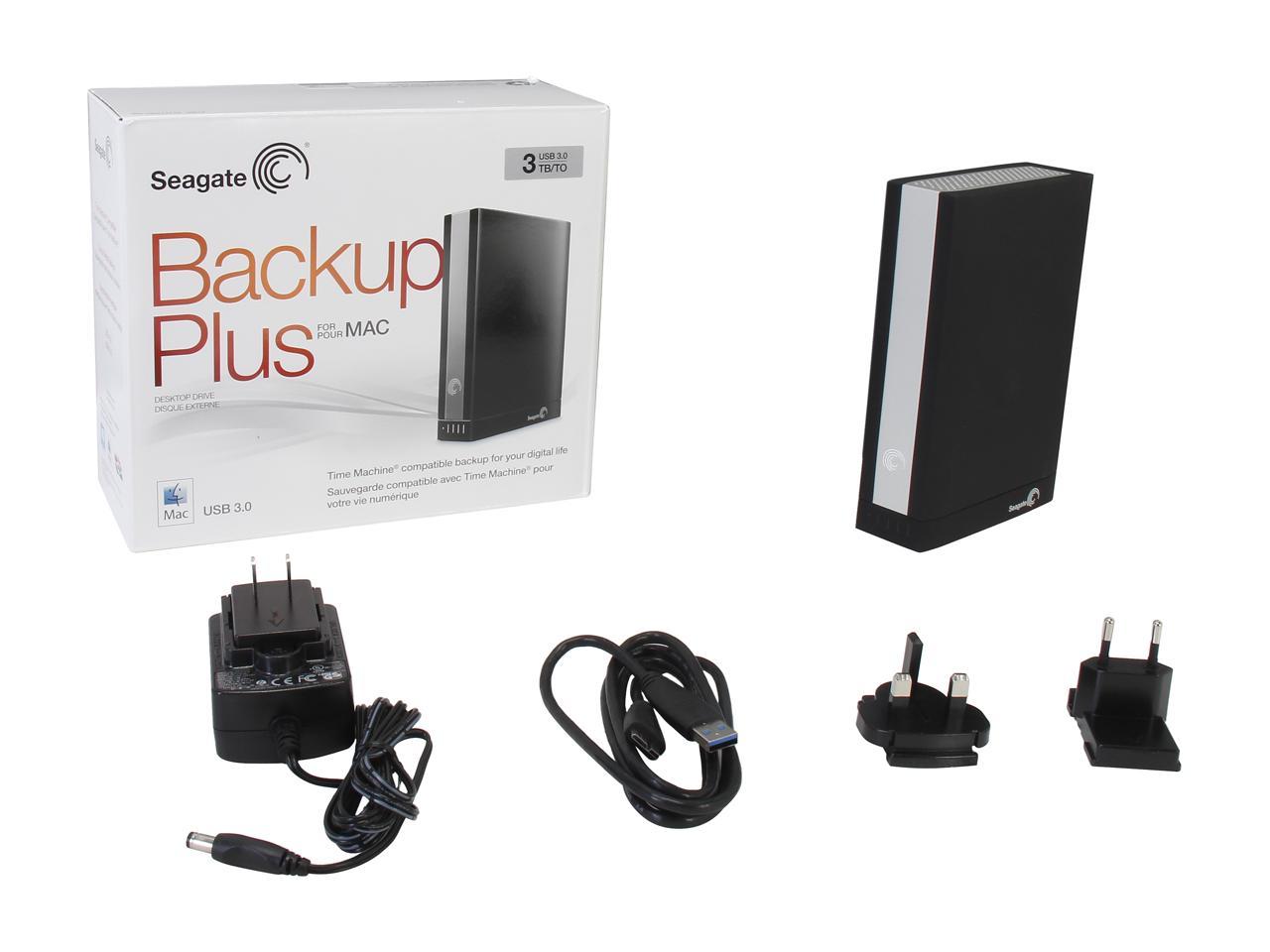 Learn more about the Seagate STCB3000901

Cons: - Drive is noisy (see other thoughts) - Large power connector, takes up bulk connector slot on my UPS (or two of the standard sized slots)

Overall Review: TL;DR version: it's loud enough to be annoying The product documentation clearly states that there is a 2 year warranty; newegg product page lists a 3 year warranty. The drive is loud. The noise is comprised of two components: the drive itself and the vibration generated from the 7200 drive it contains. It seems that the drive itself causes excess vibration that the tiny rubber feet on the enclosure cannot compensate for. Additionally, it sounds like there is a fan inside somewhere, but once I opened up the enclosure there is no fan to be found. My conclusion is that the noise is from the high spindle speed of the drive. When this item placed next to my homebuilt NAS with 3 HDDs, 2x 120mm fans and PSU fan; this unit is louder than my NAS. For my living room/HTPC setup, this is unacceptable; I can hear it whining from across the room. Since I got this for a decent price, I decided to open up the enclosure and check out the internal HDD to see if it can be salvaged. Basically you just need to pull off the bottom and then use a screwdriver to carefully separate the two halves of the top enclosure. Inside I found a 7200rpm ST3000DM001 drive, originally manufactured over a year ago (Sept 12). Once I popped the drive into my NAS and sealed up the case, the noise was muffled to an acceptable level; in fact it was as quiet as my other old barracudas. As a bonus, I was able to drop in an old 1.5TB barracuda LP SATA HDD into the enclosure I just ripped open. Once I plugged it in, Win 7 recognized my old HDD (including data) instantly. So I guess I gained a fanless external USB 3 enclosure out of the deal. The loud noise and vibration disappeared with my old HDD in there, which is a 5900 rpm drive. Since I'm pretty sure I just voided my warranty, only time will tell if this was a good idea. I bought two of these; both successfully passed Seatools long generic test on the first attempt. -1 egg due to the noisy drive, which is a design flaw IMO

Pros: - Fast - Auto off after several minutes which is nice for energy conservation - Portable, taken on my travels around the world - Works

Pros: Dependable and fast. I have 2 of these drives in a raid 0 array, 3 X 2TB Seagates also in raid 0, 1TB Hitachi (Failing) and a 1TB external 2.5" Seagate. I build computers as a hobby, 100's if not into the thousand range. I have learned alot in doing so and stand by Seagate. These drives when raided preform close to the speed of an SSD. The 2TB version is however slightly faster.

Cons: None, still running like a champ with 6TB of data on them.

Overall Review: Will buy another.

Cons: --Useless back up software that came with it...needed an internet connection to update software upon PC installation... else Windows 8 would not recognized it. -No base to hold it upright... gets knocked down easily...ex..vibration. -Bottom part feels like it will fall off. -Flimsy built. -Bulky build -Bulky power adapter. -Noisy.

Overall Review: Maybe it was meant more for a mac than a PC. Costco had it for cheaper than Newegg...Would have returned it but I was too lazy. Used the software to set up the backup. It stopped in the middle and when I tried to restart itt...it says the drive was not recognized and all the backed up data was no longer recognized either. had to do a work around. If you're not tech savvy...Save yourself the trouble and get a different drive.

Pros: Drive was Mac-formatted out-of-the-box, just plugged it in and it was ready for use. The drive for me is reasonably quiet (certainly quieter than other enclosures I've used). The enclosure finish is actually nice too, a little bit softer plastic than most, and the indicator lights on the front are not so bright as to light up the entire room.

Cons: I got some "drive unmounted" errors during a large file copy to the drive - these errors were mentioned in reviews on other web sites. I went to the Seagate site and downloaded a firmware update for the drive, and that update seems to have resolved the issue.

Overall Review: I haven't particularly checked the transfer speeds - I'm using this as a Time Machine backup drive and to store some media files, so quick access isn't super important for me. But for that usage, at least, it seems to be just fine. This is on a 2011 iMac, using USB 2.0 (the drive supports 3.0).

Pros: Well im using this on a windows 8 machine not a Mac. It works great though you need a special driver download from the Seagate website in order for it to be recognized in windows.

Cons: no real cons to report

Overall Review: if you want to use this to store images that require you to run outside of the windows environment it won't work. However the work around for this is to install all the software you want to keep from Seagate and reformat the drive to exfa

Pros: Backs up regular files, but i/o errors on restores. And oh, by the way you will never be able to do a Windows system image backup. No wonder they are dumping these. Its Glyph for me from now on. I'm on the motherboard USB port, so its not a hub thing, just poorly designed for windows.I've been in IT Unix admin for twenty years although its mostly Linux now.

Cons: Cannot take a system image of windows 7 even if you format the entire drive, and make partitions lss than 2TB. What a scam.

Overall Review: The customer should be made aware of these system images limitations.

Overall Review: I plugged this into my Mac and started Time Machine, but the drive kept disconnecting. I came here to write a scathing review, but I found the review by Acrobat who had the same problem and fixed with the firmware update. Thank you, Acrobat. Still, the drive shipped unusable, so I dinged it one star. I don't have a USB 3 Mac yet, fortunately it is backward compatible with USB 2. It's slow, but still very usable for backup. My primary backup drive is FW800, so two drives will have to fail before I even notice the speed of this one.