OUT OF STOCK
Sold by: Newegg
Shipped by Newegg
This item is currently out of stock and it may or may not be restocked.
Out of Stock
Add To Wish ListFound on 31 wish lists 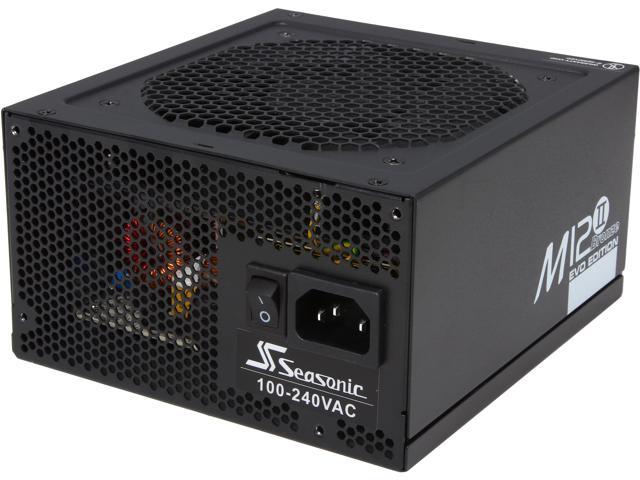 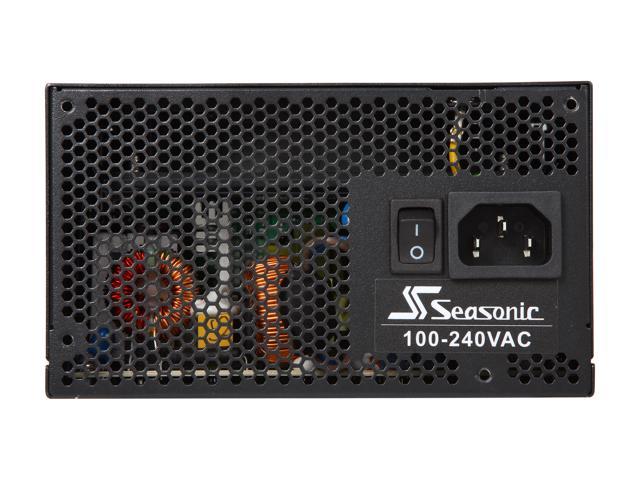 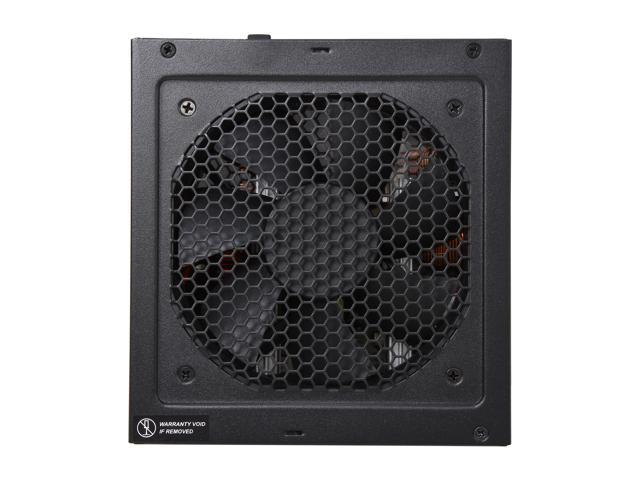 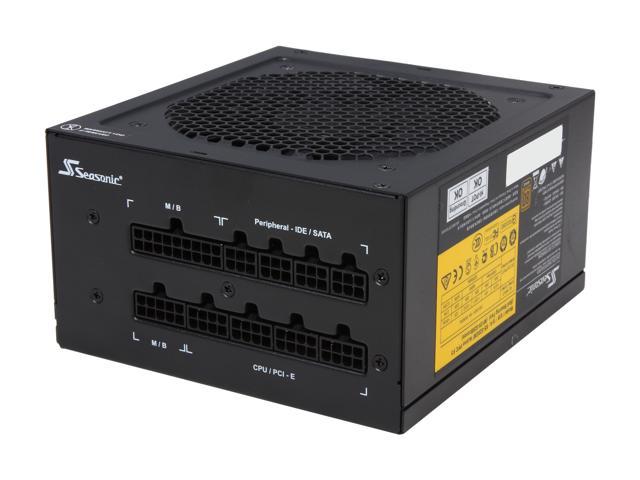 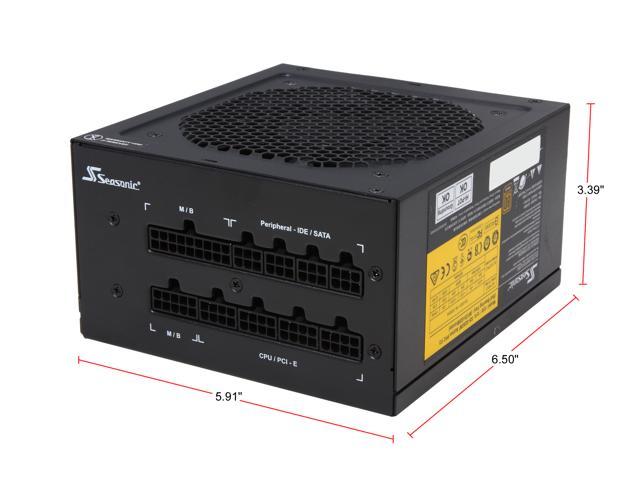 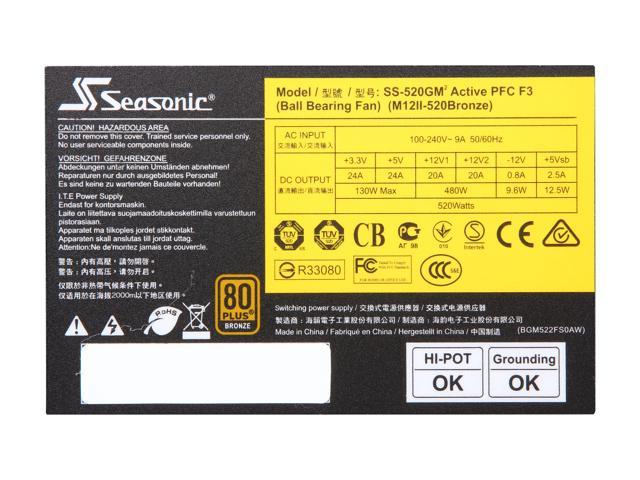 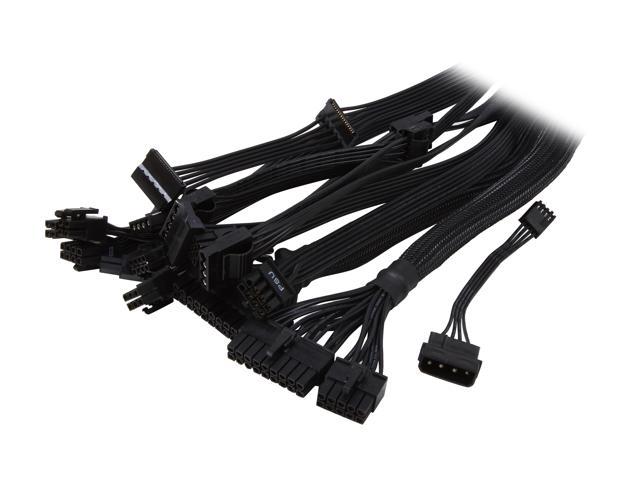 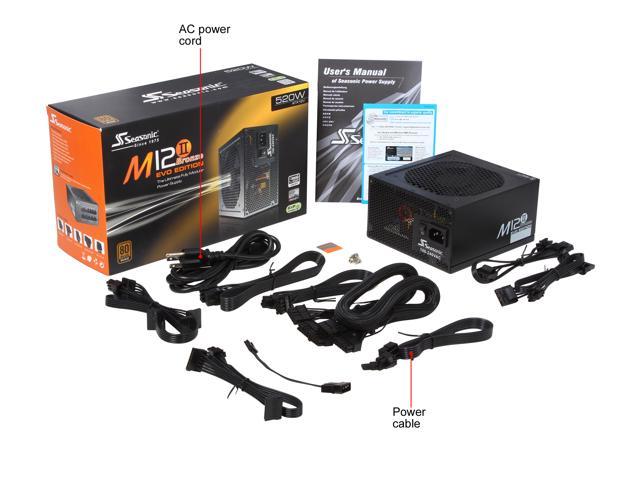 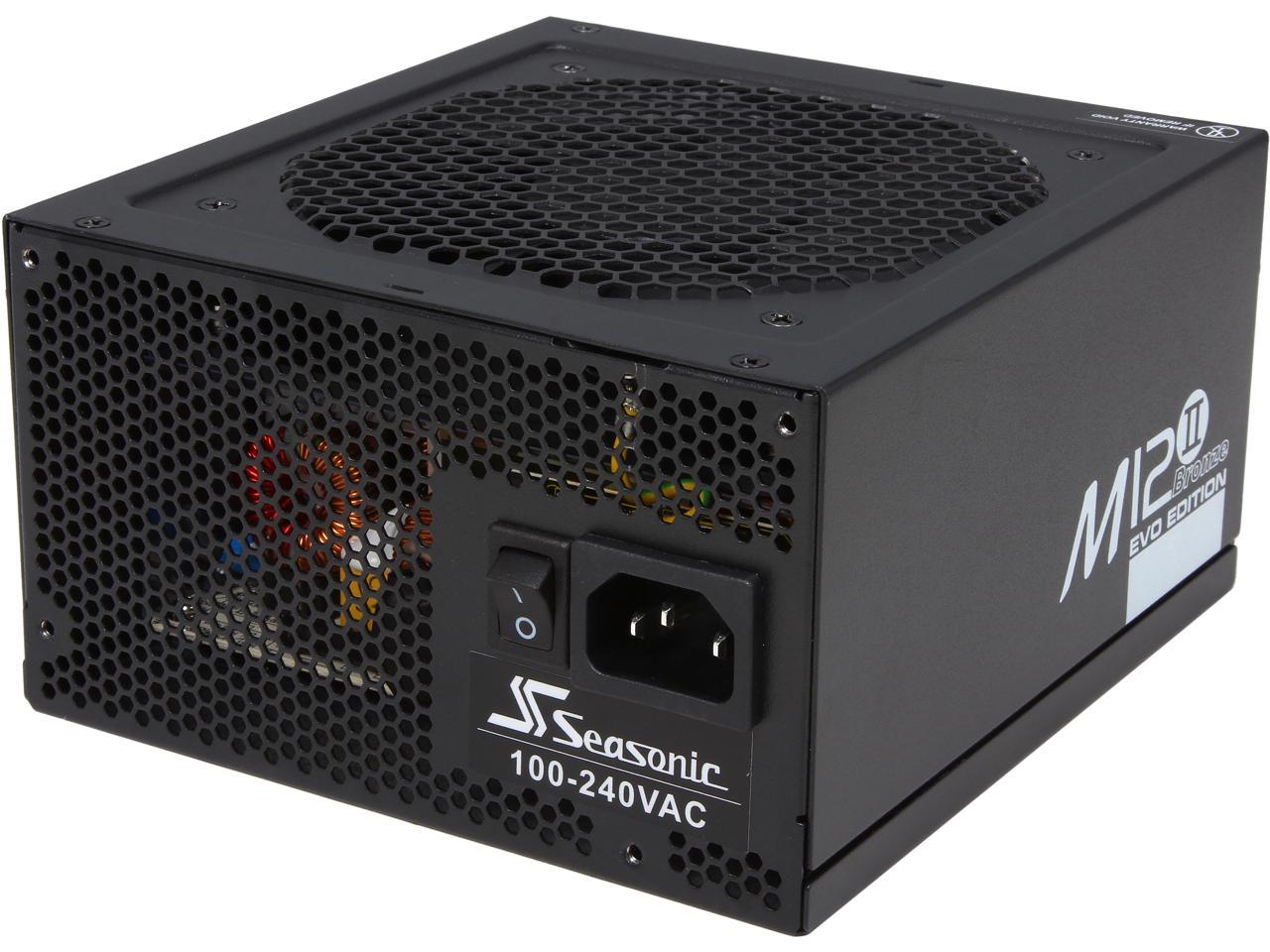 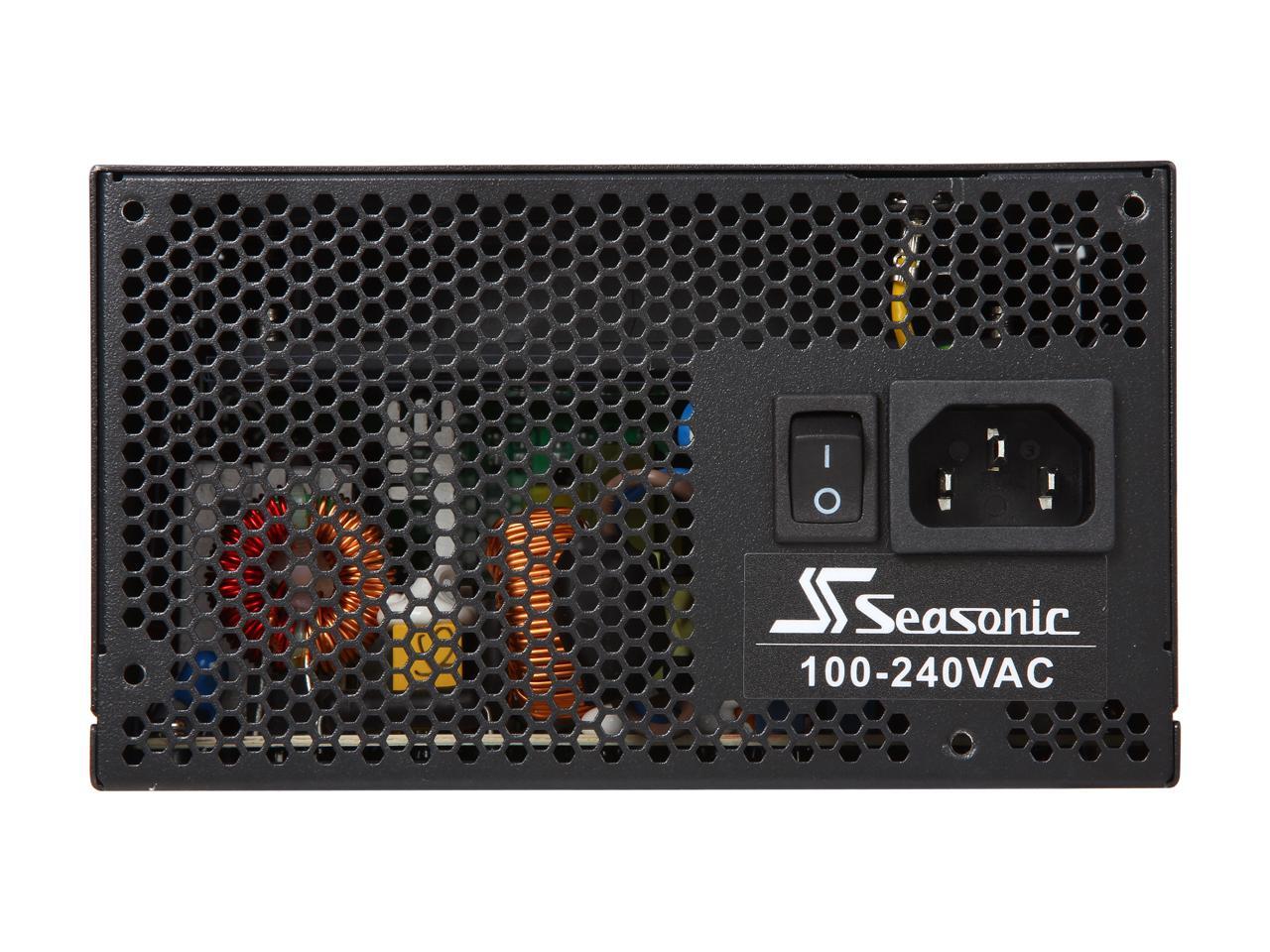 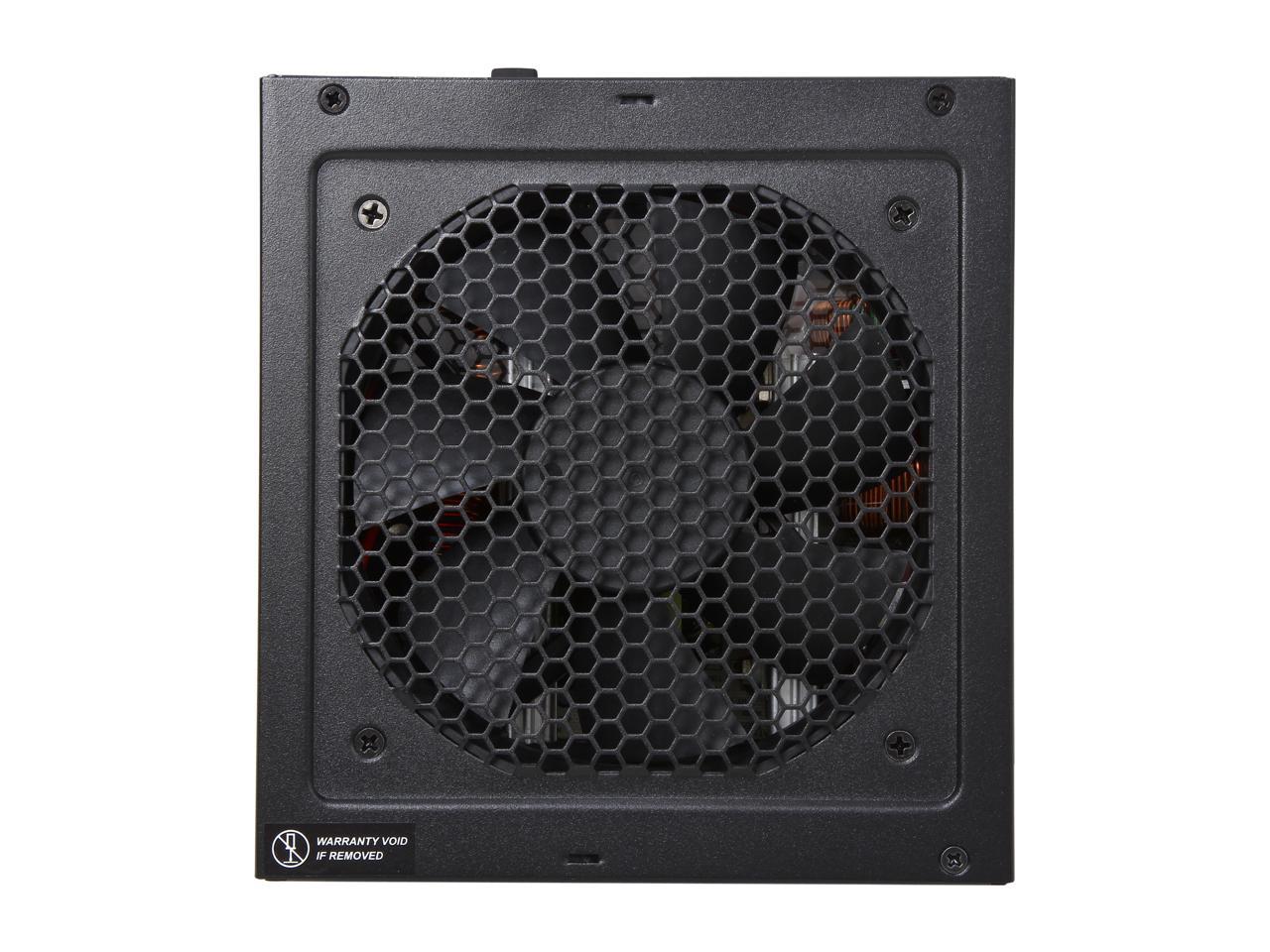 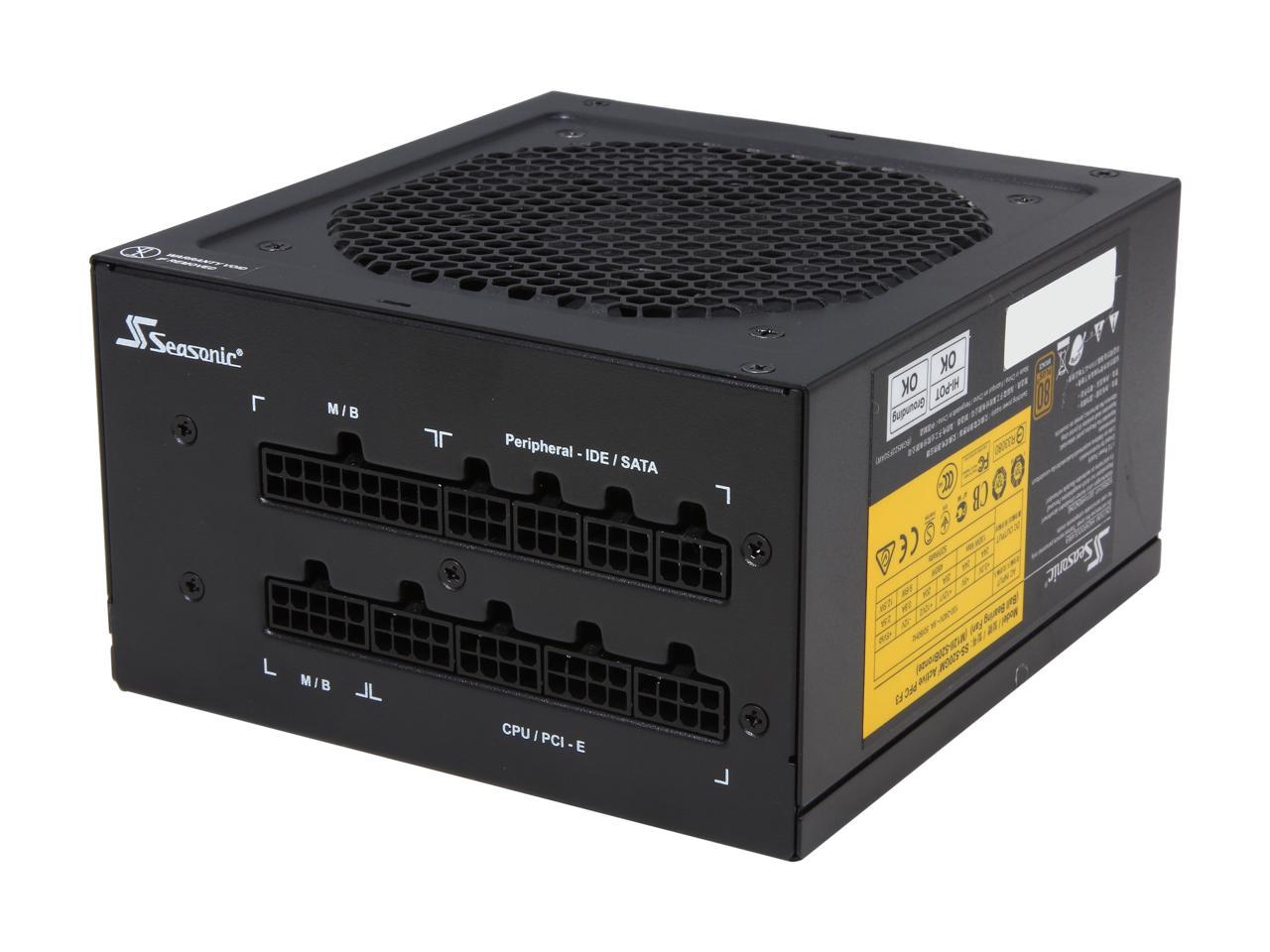 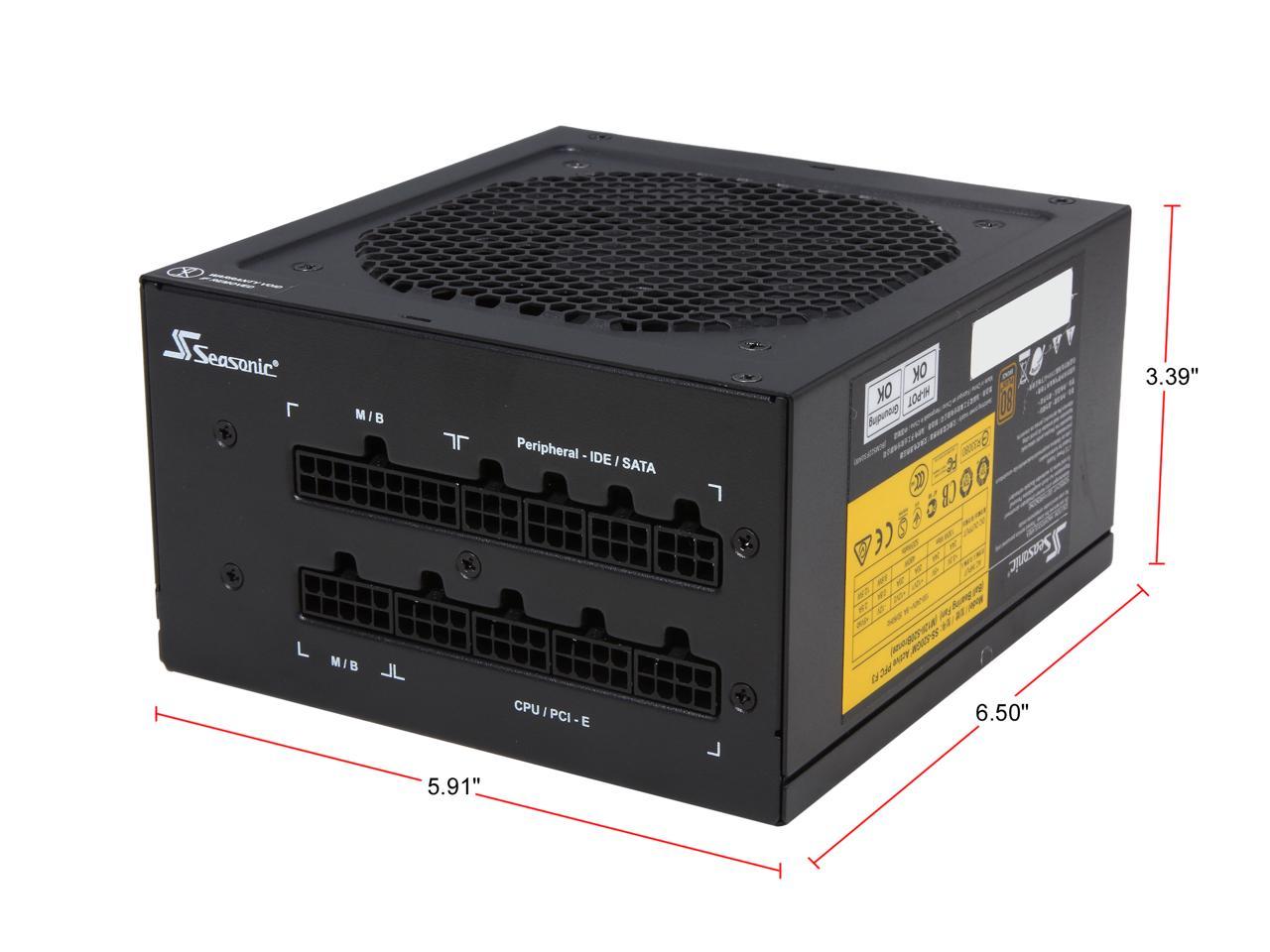 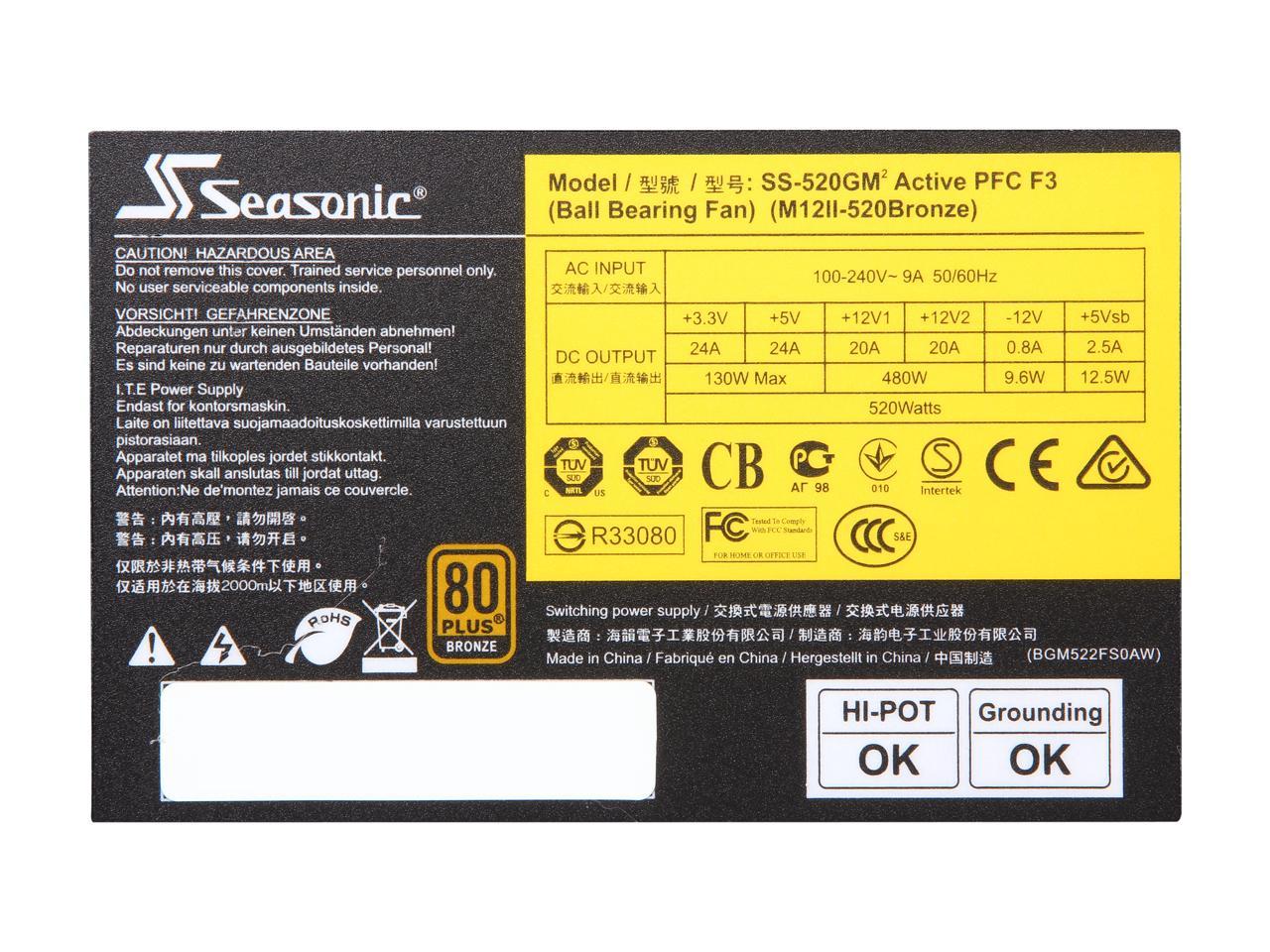 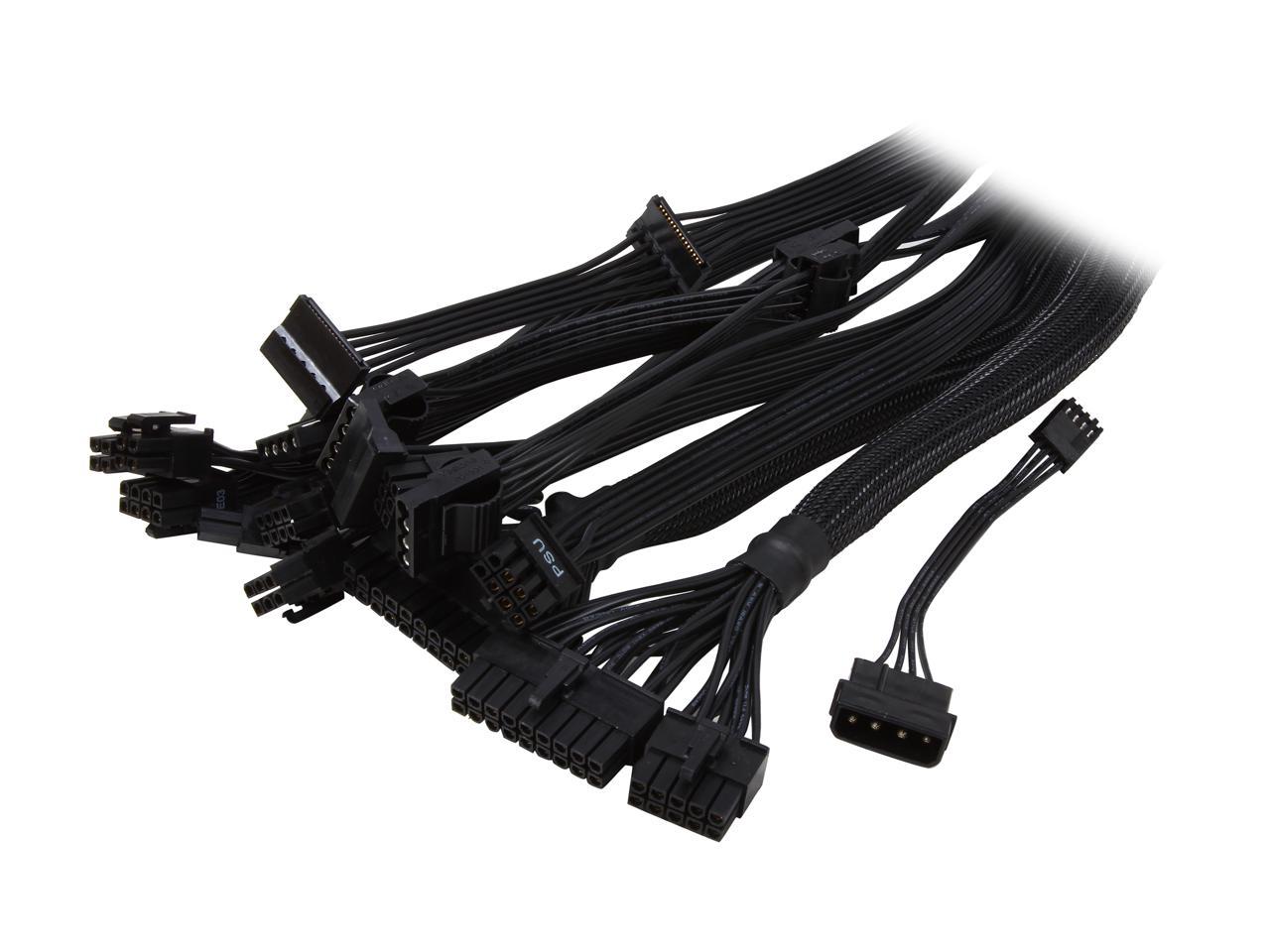 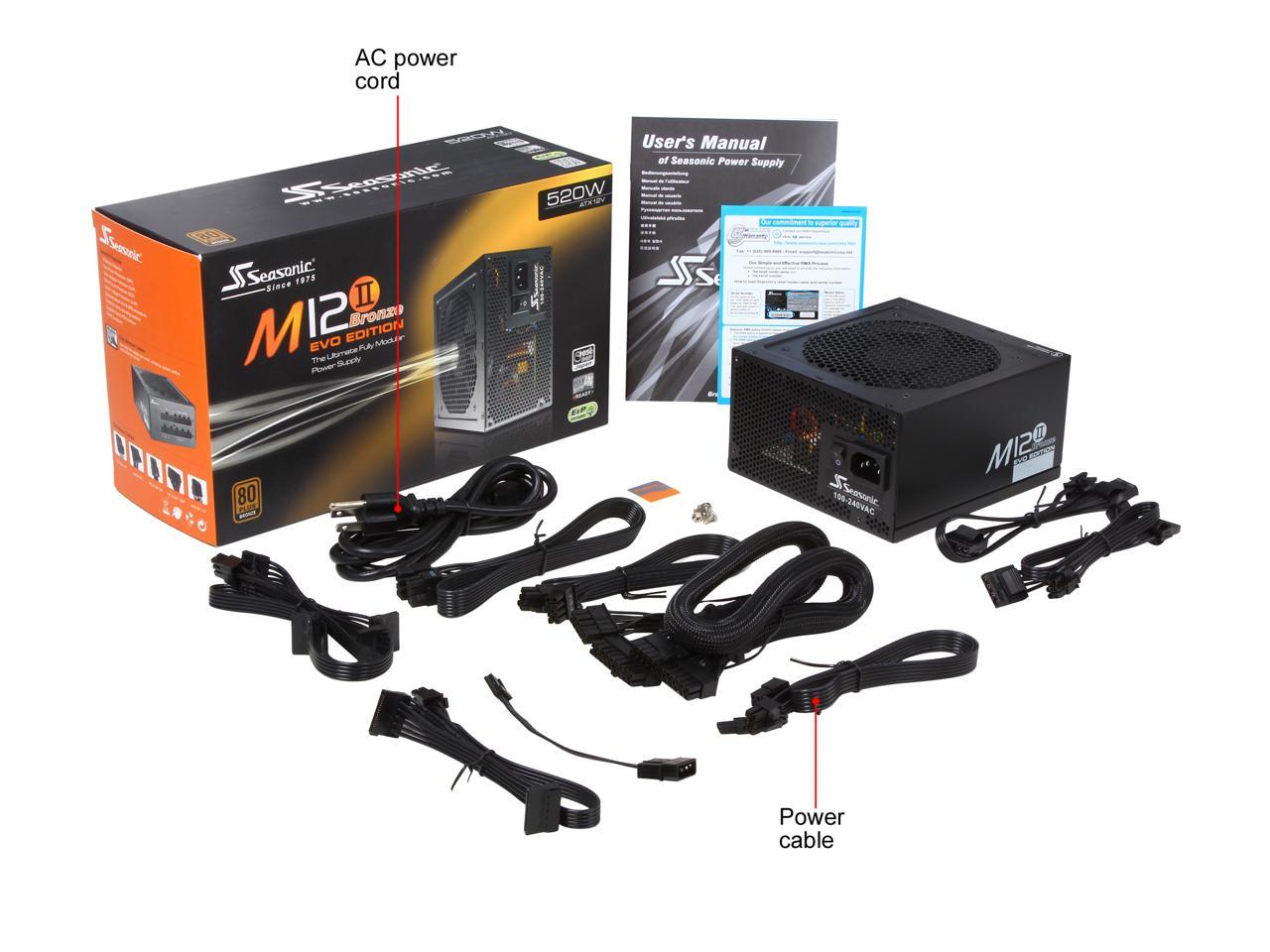 SeaSonic Electronics launches the M12II "Bronze" Series, the new and upgraded version of the M12II Series in response to the growing demand and anticipation for more energy-efficient products. The M12II Bronze Series inherits the same output and wattage options as well as the superb quality and ultimate silence from the M12II Series. The M12II Bronze Series, available in 520W and 620W, offers buyers with a mid-range power output solution with cable management to meet their exact system needs—cable management is now made easier than ever.

While upgrading in efficiency, the M12II Bronze Series maintains an advanced design and quality components from the past M12II line. Such designs and components including Double Forward Converter design, Smart and Silent Fan Control and highly reliable Japanese-brand capacitor also boost the overall performance in stability and silence. The M12II Bronze Series is available in a standard ATX Form Factor and in wattages that are beneficial for a PC system. With the all-in-one cabling design and EPS connectors, the M12II Bronze Series is geared to support IPC and server systems and as well, both 6P and 8P PCI-E connector for latest and high end dual graphic cards. Moreover, the modular design also provides a flexible solution for orderly cable management.

The M12II Bronze Series is made reliable by featuring safety regulations such as Over Voltage Protection (OVP), Short Circuit Protection (SCP), and Over Power Protection (OPP). Major safety and EMC directives and as well, the environmental certifications RoHS and WEEE increase safety and usage reliability for the users. Pros: It's a 80+ certified 500 watt+ modular PSU from a reputable company, what's not to like? The 24pin cable is plenty long even for the newer tower cases with PSU mounts at the bottom. The modular design aids with neat wiring. Two 6pin pcie plugs (one with optional 8pin) will support any current video card without the need for an adapter, and will handle lesser multi-card configurations. Having owned one for less than a week, I obviously can't rave about reliability of this particular unit, however over the last decade, at work and home I've used many Seasonic products, and every last one still works. Like pretty much all Seasonic PSUs, this one is very quiet in operation, and very simple and gimmick free in design.

Cons: The 12v rail is divided into 2, and I can't find any documentation as to which plugs use which rail. I'd assume that the two PCIe plugs would be separated, but without opening up the unit, which voids the warranty, I can't be sure how it all works. This info would be nice to have to help insure that we don't overload one rail while not using the other.

Overall Review: The biggest problem with Seasonic has always been their prices, so it was nice to find a good solid modular unit for under $100.

Pros: * Was able to plug everything in and it work * Super quiet * 4+4pin reaches CPU plug (but had to go over GPU, unless you have a extension) * Floppy connectors are on a splitter, as they are useless on a modern system since you can't install a floppy drive as the motherboards don't support them * Comes with a SeaSonic bag to store your spare wires in * Case sticker * 4 black screws * Power cord * 5 year warranty * The non-modular version gets 80%+ even under 20% load, so I assume this one does also * I got a deal on this :) More other thoughts: If you want to route the EPS12v/ATX12v power behind your motherboard tray look at 12-198-024 or 12-200-496 (newegg search) Asus M4A79XTD EVO AMD Phenom X4 965 Asus ENGTX550 Ti DC G. Skill Ripjaws DDR3 1600 12GB Corsair CSSD-V30GB2A WDC WD5000AAKX SeaSonic M12II 520 Rosewill CHALLENGER Cooler Master Hyper 212 Evo See eggxpert thread #837565 for why I made this purchase, my signature for link to pictures of rig

Cons: * No solid capacitors, the icon is misleading (all solid will would not work BTW) * The cables could have been done better (see other thoughts) * 8 pin is not modular (if it were they could have made it double as a extension cable for the 4+4pin) * There is probably only one 12v rail, as there is only one on the non-modular version (see review by jonnyguru, google it) * Seemed like the sata plugs were upside down on the wire, as if it was meant for a top mount case, took some creativity to make myself happy with it * No way to tell if it was open box or not, but nothing was missing, most companies use a tape like sticker or seal the box in a cheap plastic, was I sent a open box product? nothing was missing :? * The sticker is bigger than a cpu or asus sticker and looks best on a white case * Wish there was 1 molex on a sata cable, as I only needed one for my fan controller * They could have covered more of the wire with the mesh sleeve * Now cost $85.98

Pros: All the sites mention SeaSonic as one of the best Good Price Free Shipping Rebate (I hope) Full Modular

Overall Review: What I appreciated the most was the ease with which the cables attached to the PSU. They don't fit loose they just don't take so much effort my hands get pained The unit is as quiet as I would have hoped

Overall Review: I picked up this power supply while on sale. It is fully modular and comes with all flat ribbon-like cables, with the exception of the 24pin being sleeved and round, thus making it easier to hide and tuck these wires in cramped quarters behind the motherboard. Have been using this for a few months now with no issues.

Pros: - Fully modular. This was my first time working with a fully modular power supply and it is definitely worth it, makes life so much easier. - Super quiet - Really easy to install, fit perfectly into my case, and didn't have to consult a user's manual at all it's clearly marked on the PSU what plugs into where. - Good selection of cables, everything I needed and lots of spare stuff I didn't need but may need in the future. And the cables seem good quality I don't have any fear of needing to replace any of the cables at any point - Great price, comparing it to other similar units this one seems to have the best bang for your buck.

Cons: - Not really a con, the only thing I would suggest is plug the cables you'll need into the PSU before installing the PSU into the case. I didn't think to do this and I believe my life would have been a little easier if I had, though installation was still a breeze in any case.

Overall Review: I've only been using it for a few weeks at this point so I can't comment on reliability, but I've heard good reports from others and it's definitely been performing as it should thus far.

Pros: Great price. I do music production and with my old PSU that came with my computer case, it would get loud especially near the end of its life. Installed this SeaSonic. Its super quiet. I did alot of research before buying one and found SeaSonic to be a reputable brand.

Cons: None at the moment. Unless it starts making noises this thing is A1!!!

Pros: If your looking to get a good quality PSU and plan on using only 1 discreet powerful GPU at the most this is a great choice. 520watt is more than enough for beastly 680 and 7970 rigs even, just not enough for SLI. It's whisper quiet - I have it on a open frame bench case beside me too.

Cons: None I can think of(considering this price range) and I've seen many PSU's in my day.

Overall Review: My buddies who work at nearby PC hardware stores tell me Seasonic PSU's get returned defective the least which implies reliability. This was quiet and did what I needed. Active PFC and 80plus give ease of mind.

Overall Review: Everyone always recommended Seasonic so I can see why.