Feel 100% satisfied with your purchase -- with no restocking fees & no return shipping costs* within 30 days of delivery. Learn More
Price Alert
Add To ListFound on 8 wish lists 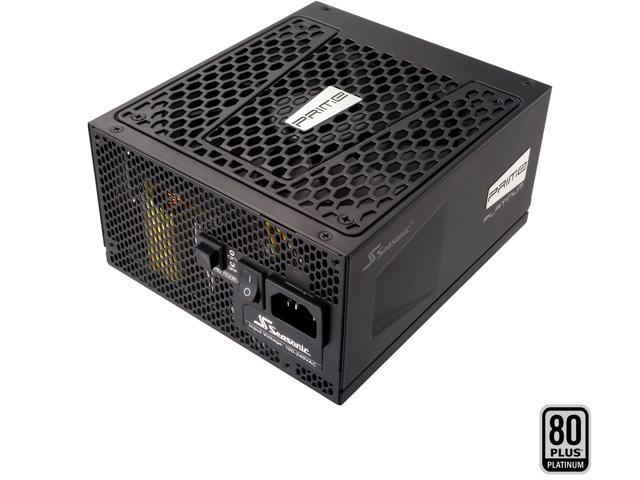 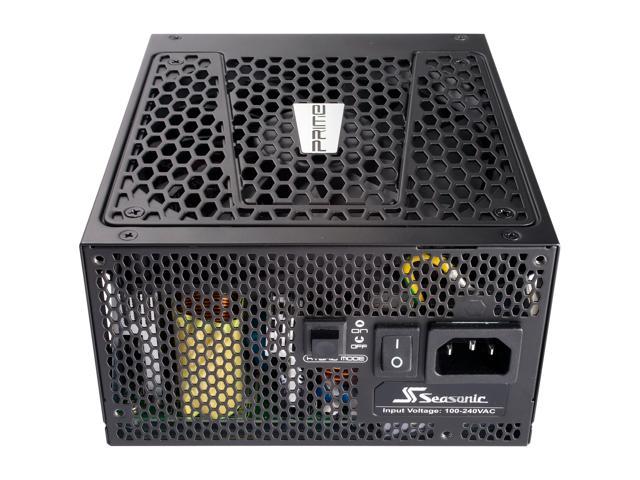 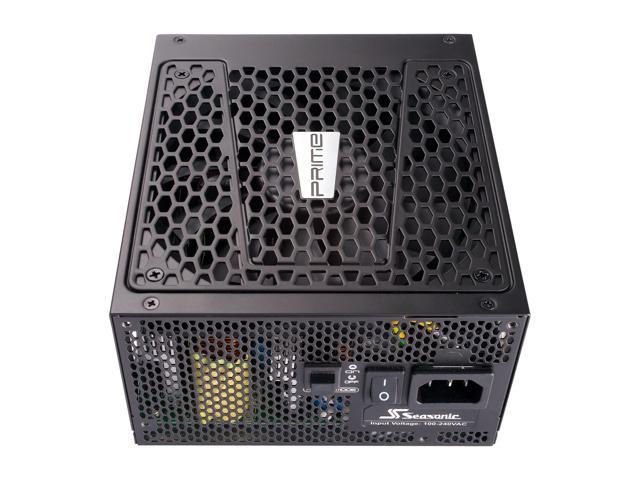 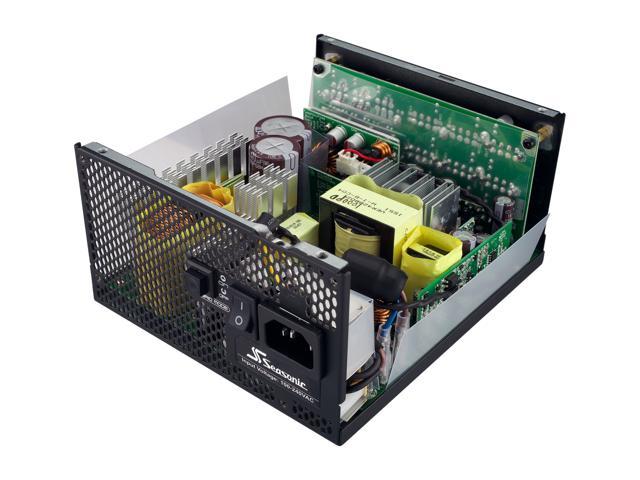 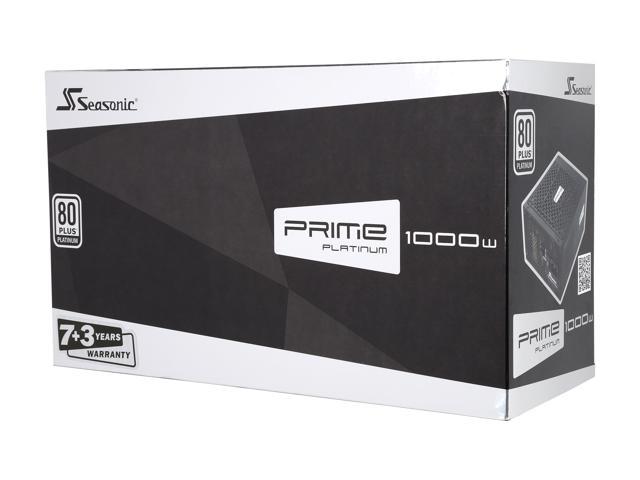 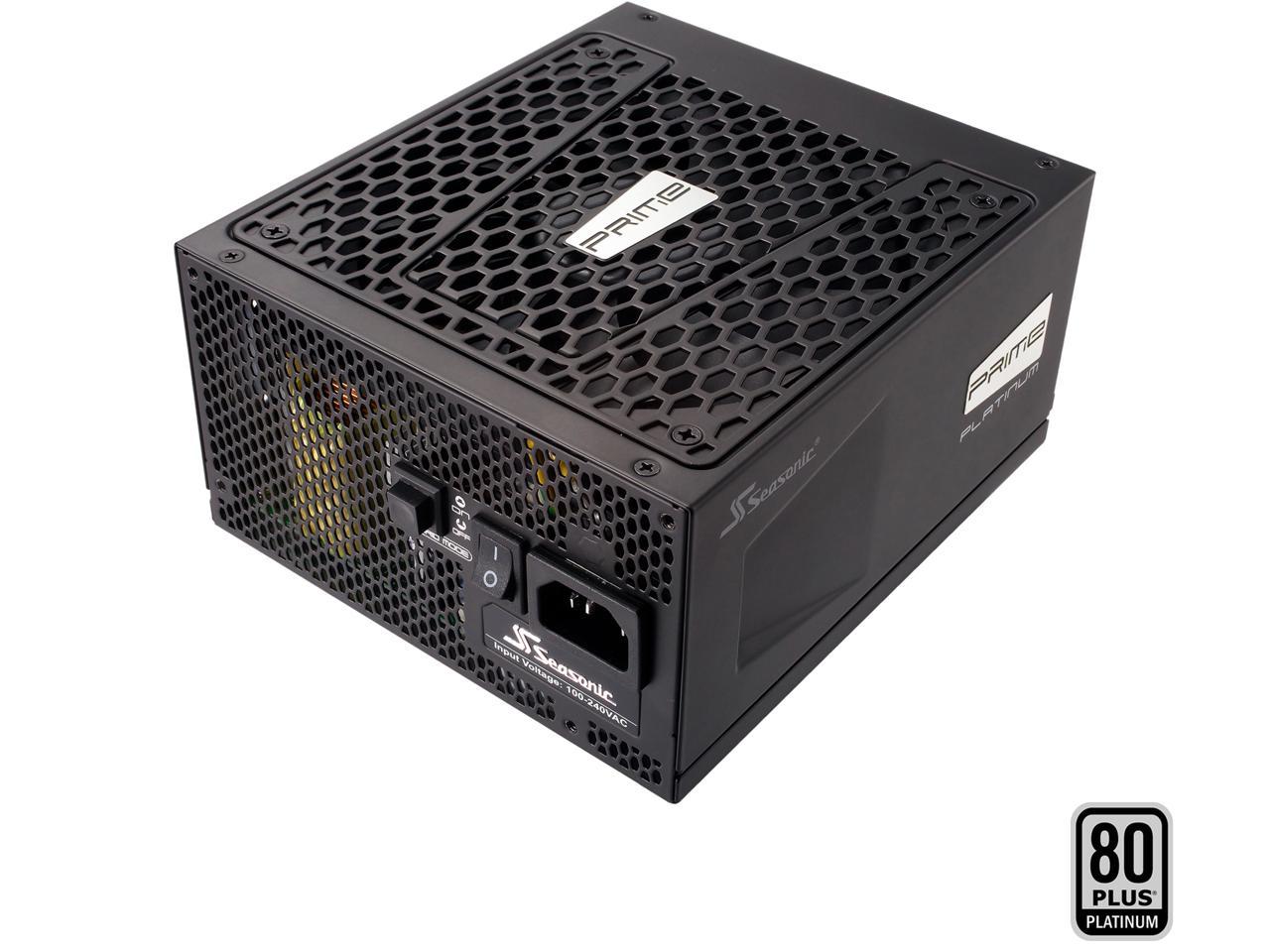 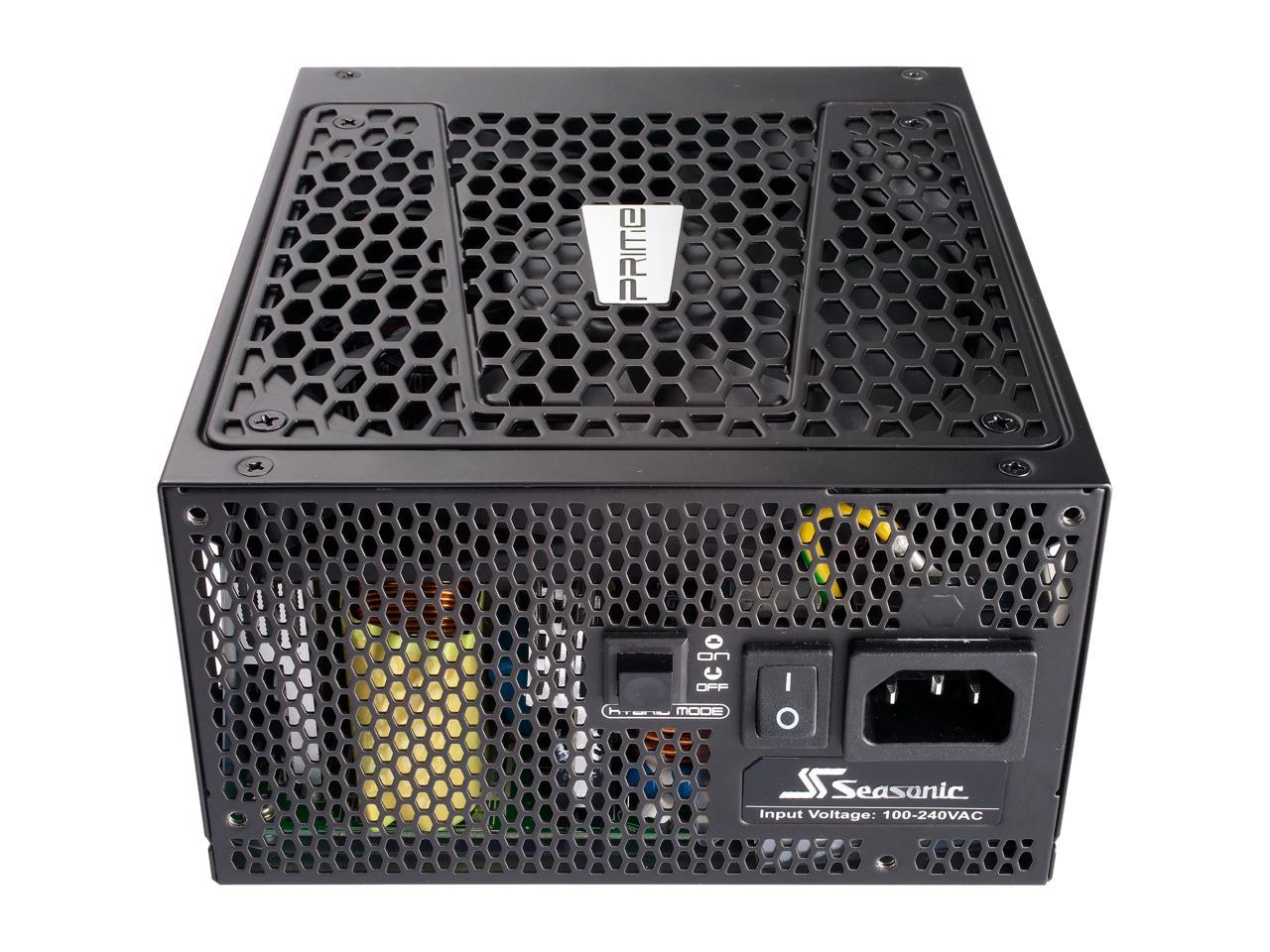 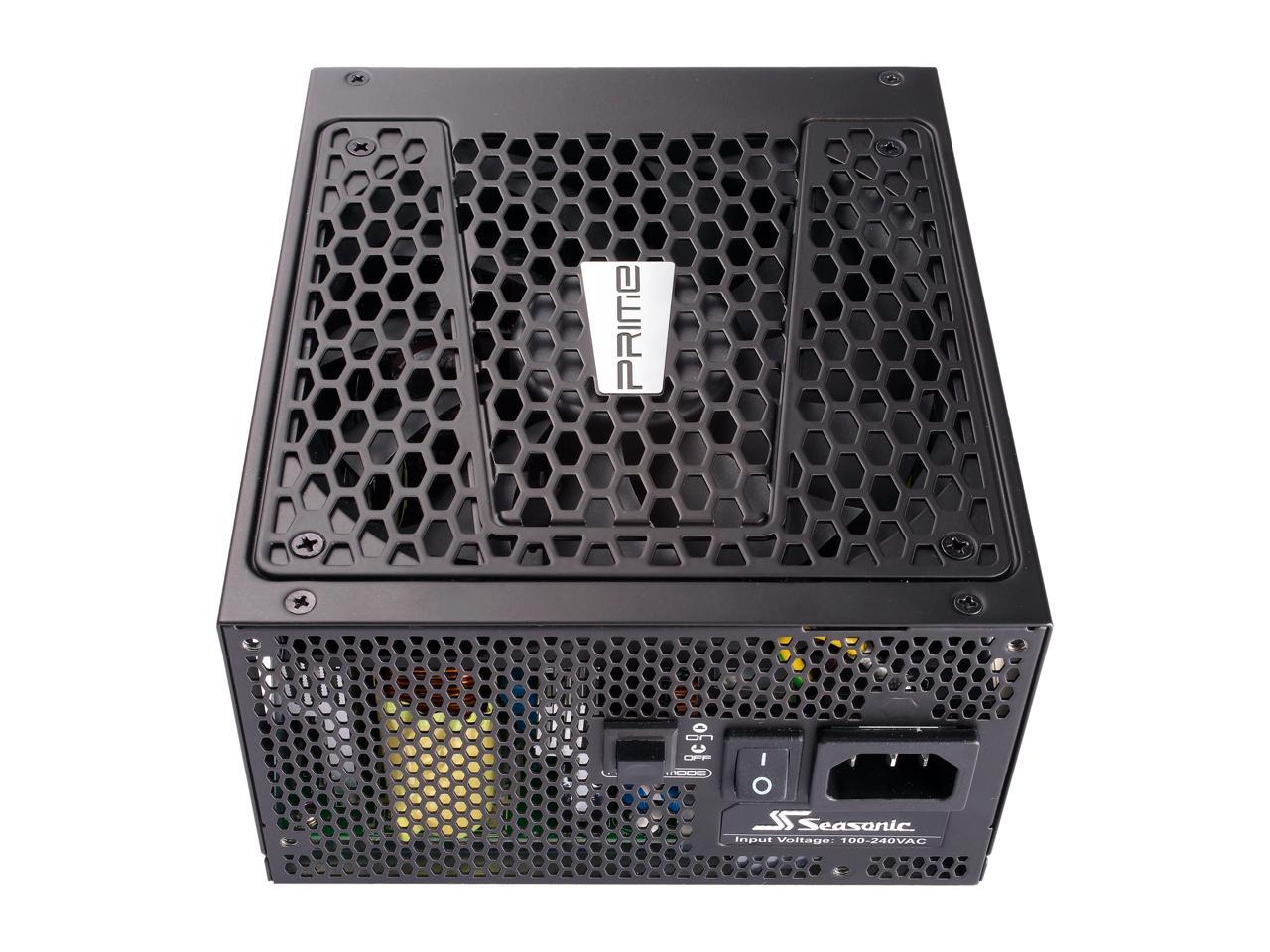 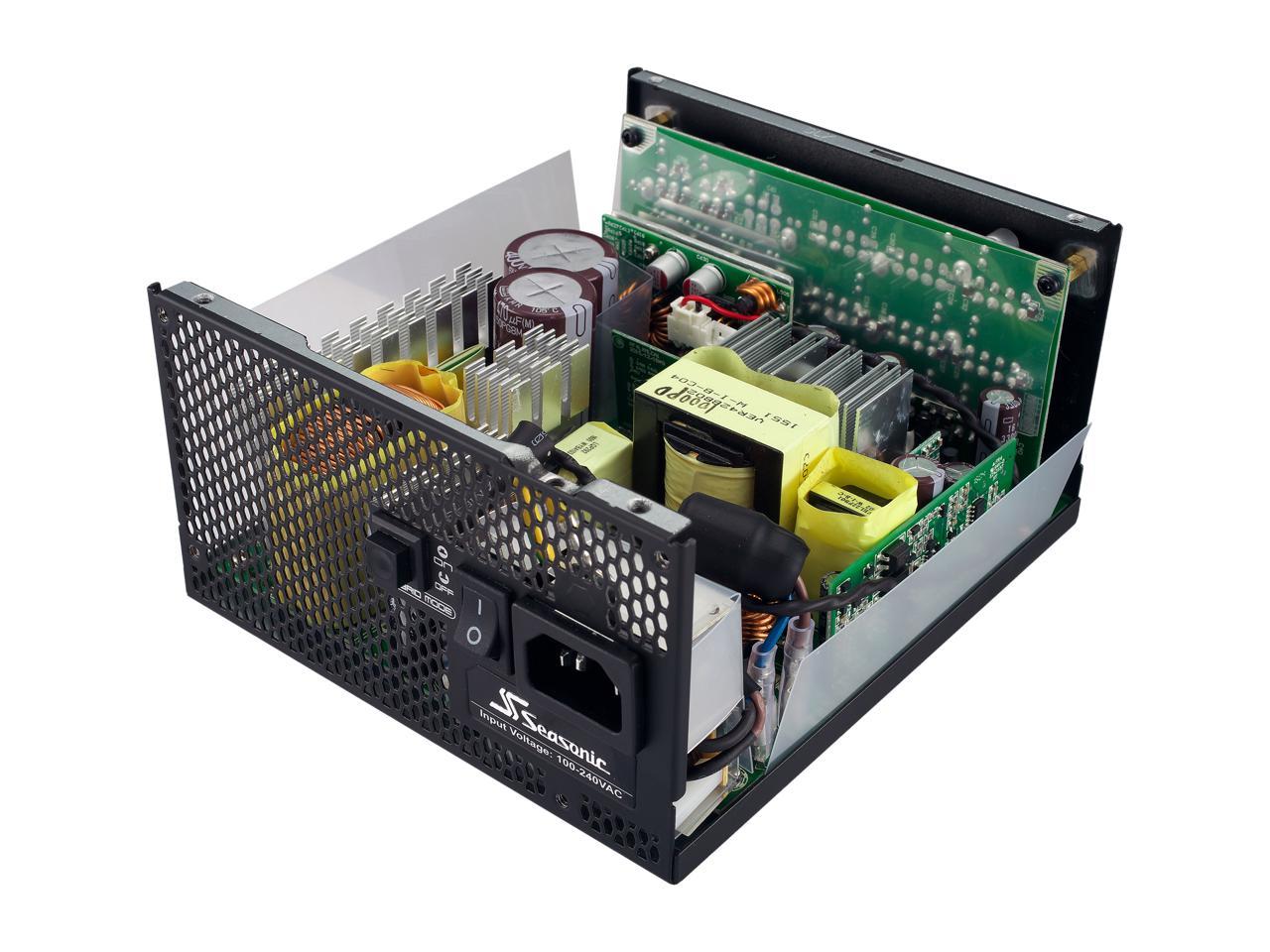 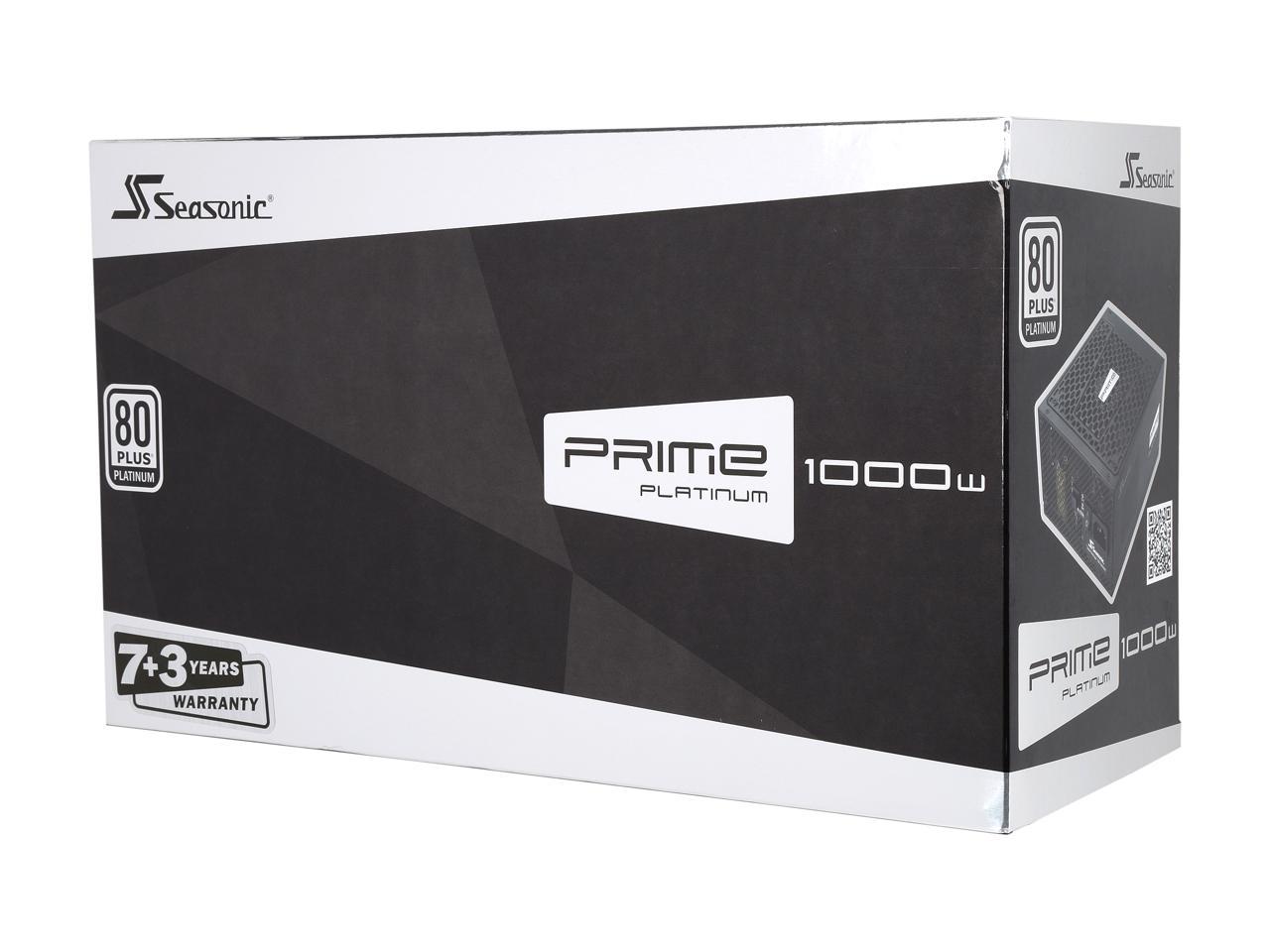 Pros: Packed well, surrounded by foam and PSU was in a felt bag. Additional pouch supplied for cables that are not being used. Velcro straps were also supplied. Quite, modular, good quality cables, connectors and nice looking.

Cons: Only issue I had was clicking sound from fan on initial power up. Found heavy sheathed cable inside of power supply hitting cooling fan. Open grille and was able to move wire enough to be out of the way of the fan. No further issues. Subtracted one egg for this issue.

Overall Review: Purchased this for a new build. The PSU comes shipped in a felt bag, kind of overkill but at least it wont get marred during shipment. Intake grille looks nice and it is shame to hide it when PSU is mounted fan down.

Pros: Fully modular, ultra-low voltage variation, hybrid fan bearing design. From my experience, unbeknownst to the user, the PSU fan will die, then the components on the PSU will run hotter and age faster, leading to a shorter PSU lifespan. I routinely check my PSU to make sure the fan is running. On the Antec TPQ-1000 I had for nine years I replaced the fan on year seven. Perhaps my the Antec I was using never did supply clean power, because I was never able to hold 4.6 GHz with HT on while stress testing. I opted to run it at 4.6 with HT off. But these days programs and games are finally being optimized to take advantage of multiple cores; with some games being optimized to discern with core is virtual.

Cons: According to the manual you have to fully power down to switch between fan modes.

Overall Review: A fully-modular, platinum-rated, 1000 watt PSU with a 12-year warranty for approximately $200 is a good deal to me. If my budget were really small I'd opt for a gold-rated 750 to 850 watt PSU. I like to have headroom when it comes to wattage, but I'm certain my system would run with a 750 watt PSU. Never go low-quality on a PSU; you don't see the lack of quality until something goes wrong, and at that point, you have to scratch your head as to whether it's your PSU. You're probably thinking, "2600k and this guy's buying a $200 PSU?" My motherboard, CPU and RAM are the only vintage components in my build. They prove to be more than enough when coupled with an Intel 750 serious 1.2TB PCI-E SSD and an Asus RoG Strix 8GB 1070. Perhaps Intel's response to Ryzen will be something worth upgrading to.

Manufacturer Response:
Hello Jesse, Thank you very much for this very nice comment and story. We are glad that we could make your overclock now possible and that your PC is fully working for everyday's use. About the manual, if you can scan and email us at newegg@seasonic.com the mistake, we will correct it because you don't have to shutdown your PSU in order to change the fan mode. Thank you for your trust in our product and brand. Best Regards,
Matthew S.
Ownership: 1 week to 1 month
Verified Owner
Top notch full modular PSU4/28/2017 6:03:38 AM

Cons: Minor nitpick, when I was removing the protection film over the prime logo it came off and I had to put the logo sticker back in place.

Manufacturer Response:
Hello Matthew, Thank you very much for your feedback. We made our best to release the best series ever and we are glad that you like our PRIME Platinum. We are sorry for the PRIME logo and if possible, please send us an email about it at newegg@seasonic.com. We do care a lot about this kind of detail. Thank you. Best Regards,
Anonymous
Ownership: 1 week to 1 month
Verified Owner
Great power supply, Silent!3/17/2017 6:15:37 AM

Pros: -Sturdy feeling unit with quality connectors. -Most of the modular cables are sheathed: 24pin atx, 2x 8pin CPU and PCI-E -Silent. Loudest part of my system is my blower style video card at idle. -Very rarely does the unit run its fan during my usage that I'm assuming as I've never seen / heard it run. (hope it does work!) -Despite mounting it fan down (back is upside down) there is an understated "prime" logo that does face correctly inside the case. A nice touch. Seems that no matter how its mounted its not blatantly un readable -Voltage rails have been extremely stable. I have been able to OC my 6850k to 4.6GHz with a VCore of only 1.305. (had it just under 1.3 but didn't want to run the risk of only trusting synthetic benchmarks) Part of that is certainly some luck with intel's silicone lottery and the Asus mobo. -Overall very happy with the voltage stability, efficiency, and silence of this Prime series PSU

Cons: -Only downside is that the sata and molex cables were not sheathed with the same black mesh of the others. -All the individual cables are back regardless of type. This can make things more difficult when making custom sheathing runs.

Overall Review: I would definitely recommend this product and purchase it again. I would like to see the included modular cables pictured in future advertisements. At the time of purchase(and writing) NewEgg, Seasonic or anyone else at the time did not have any pictures up so it was a blind purchase in that sense. Since the main visible cables are in fact sheathed with black mesh I am happy. Overall Great Product!

Manufacturer Response:
Dears, Thank you for your comment and sorry for this issue with your power supply. It may happen that one unit will fail and we are sincerely sorry about it as we always do our best to provide the best product. Thank you and sorry for the inconvenience it may have caused. Sincerely, The Seasonic team
alain.riv
Ownership: 1 week to 1 month
Verified Owner
return and refund6/1/2021 2:46:43 PM

Pros: I was refund for psu and thank you great job and happy

Overall Review: happy have to consider to buy when i Need Something

Pros: -It's a SeaSonic! -Quality -Reliability

Pros: This might be overkill for my PC but it is totally worth it. I wanted a product that lasts and can withstand my game play. The power supply came wrapped in a protective bag and long enough cables. Installation was simple enough. Not to mention I get to receive a free speaker. Score! Outside the box there was a sticker saying I can automatically receive some free Bluetooth speakers if I follow the steps marked.

Cons: So far I have no complaints

Overall Review: I would recommend this product, there is no such thing as overkill if your budget permits.