Top Rated
1,407 Ratings (84% Positive)
This badge confirms that this seller has high ratings based on customer satisfaction and on-time delivery. See More
Sold and shipped by: Mega Retail StoreContact Seller
Ships from United States.
1,407 Ratings (84% Positive)
On-Time
Delivery
91.81%
Product
Accuracy
92.02%
Customer Service
Satisfactory
84.84%
View All Seller's Reviews
This item is currently out of stock and it may or may not be restocked.
Out of Stock
Add To List 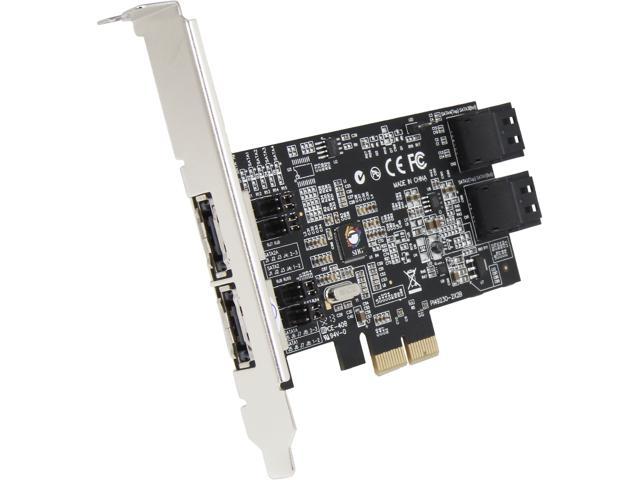 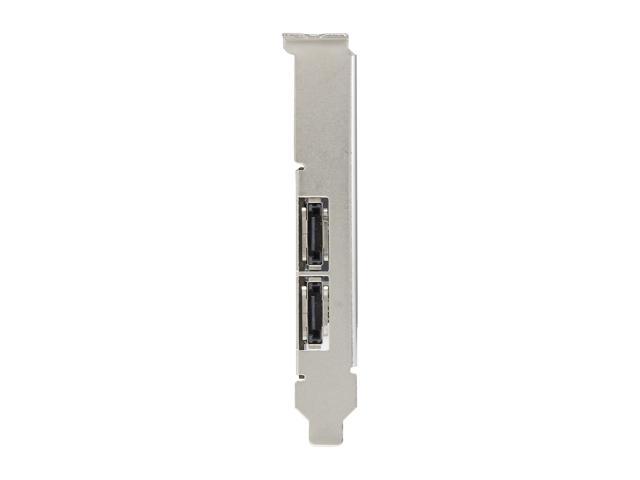 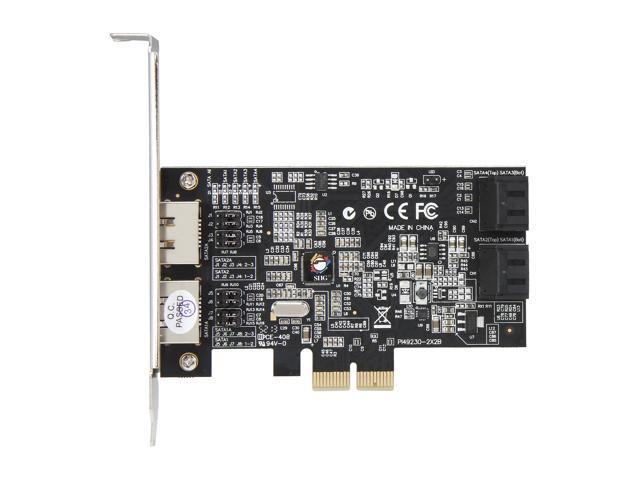 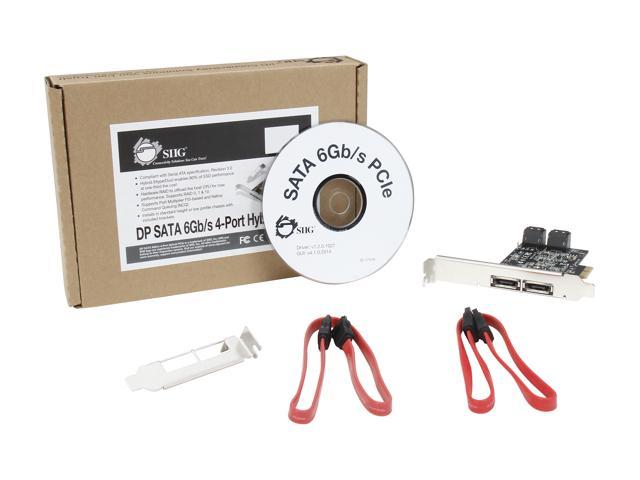 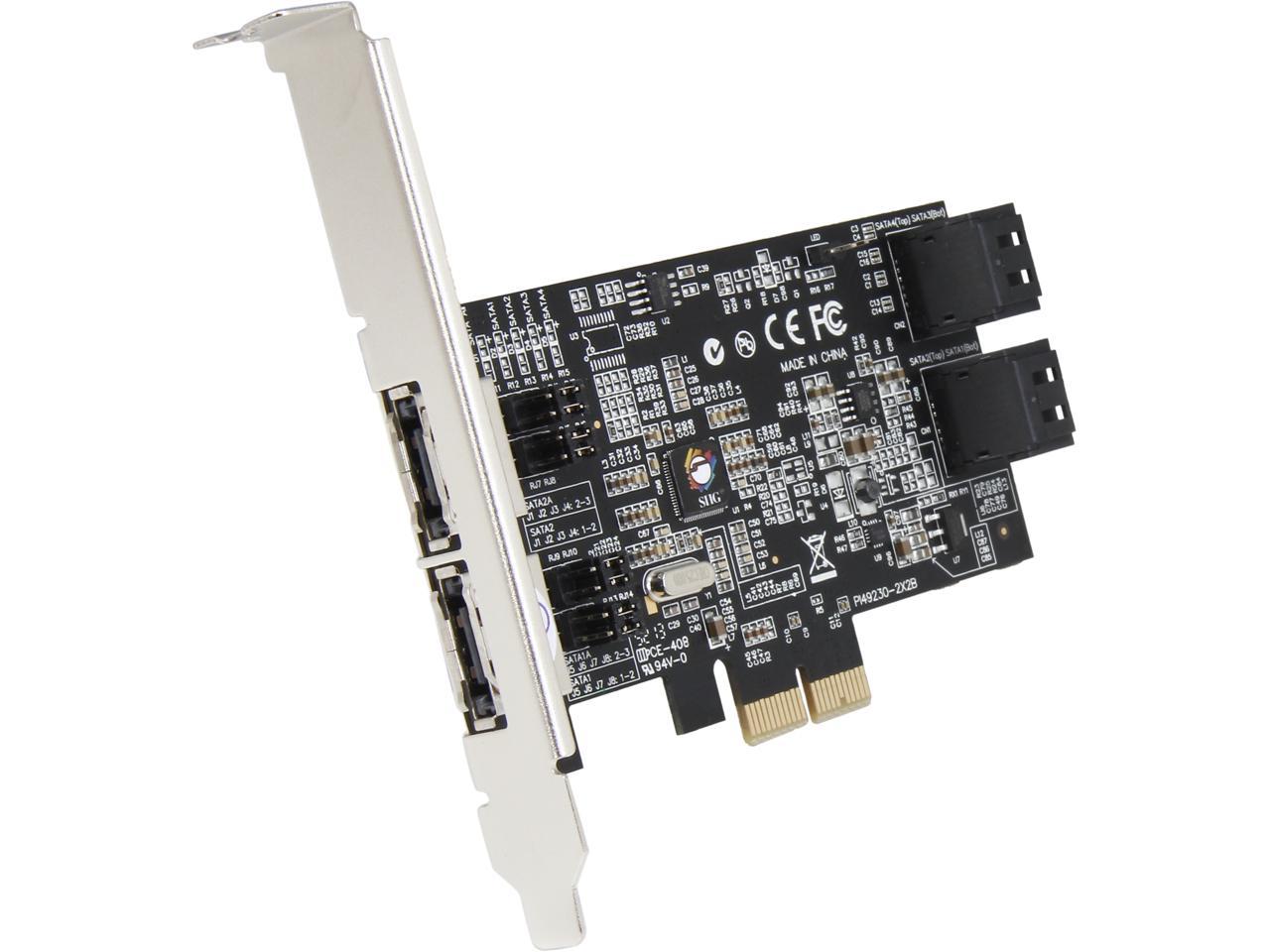 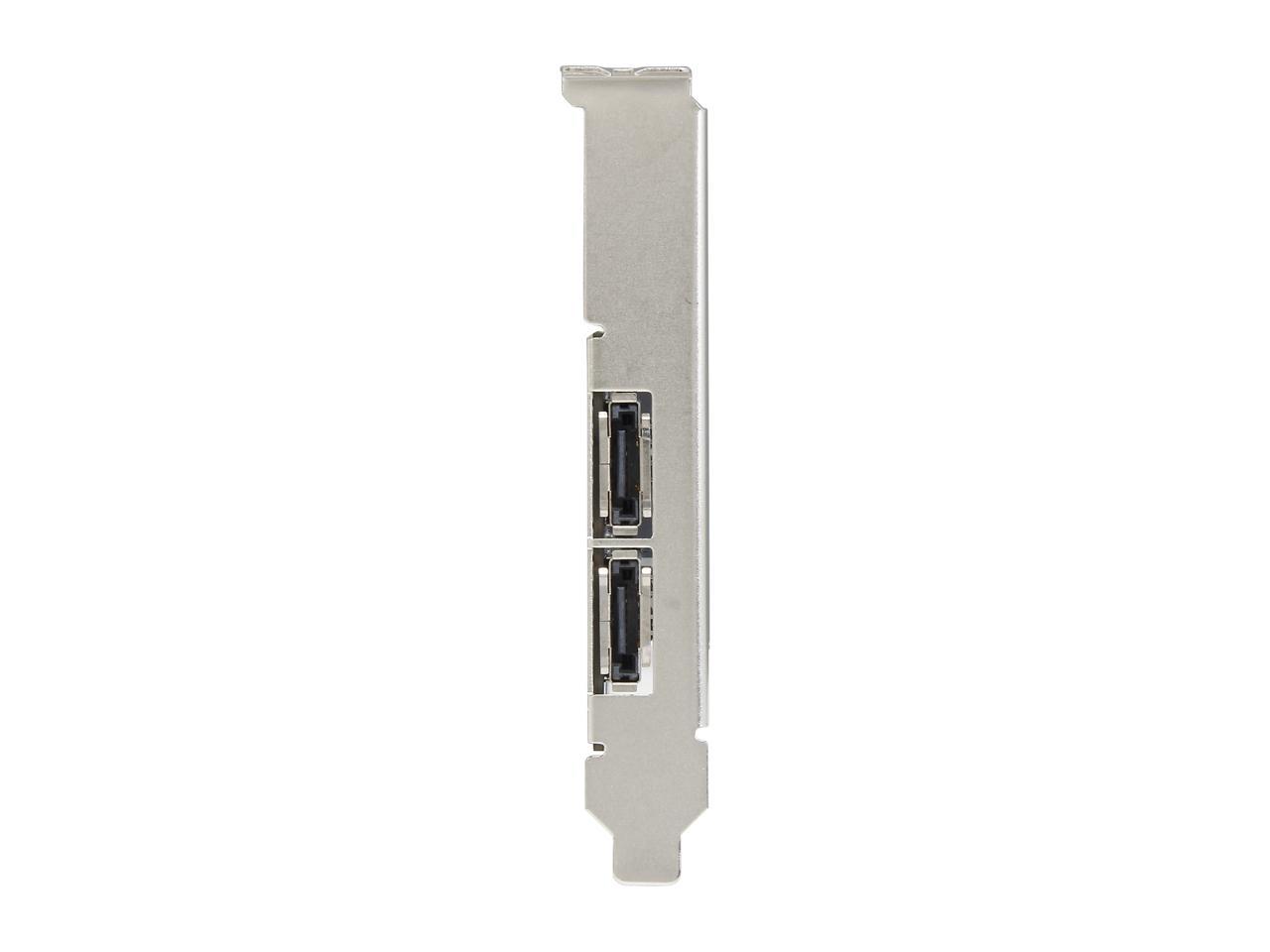 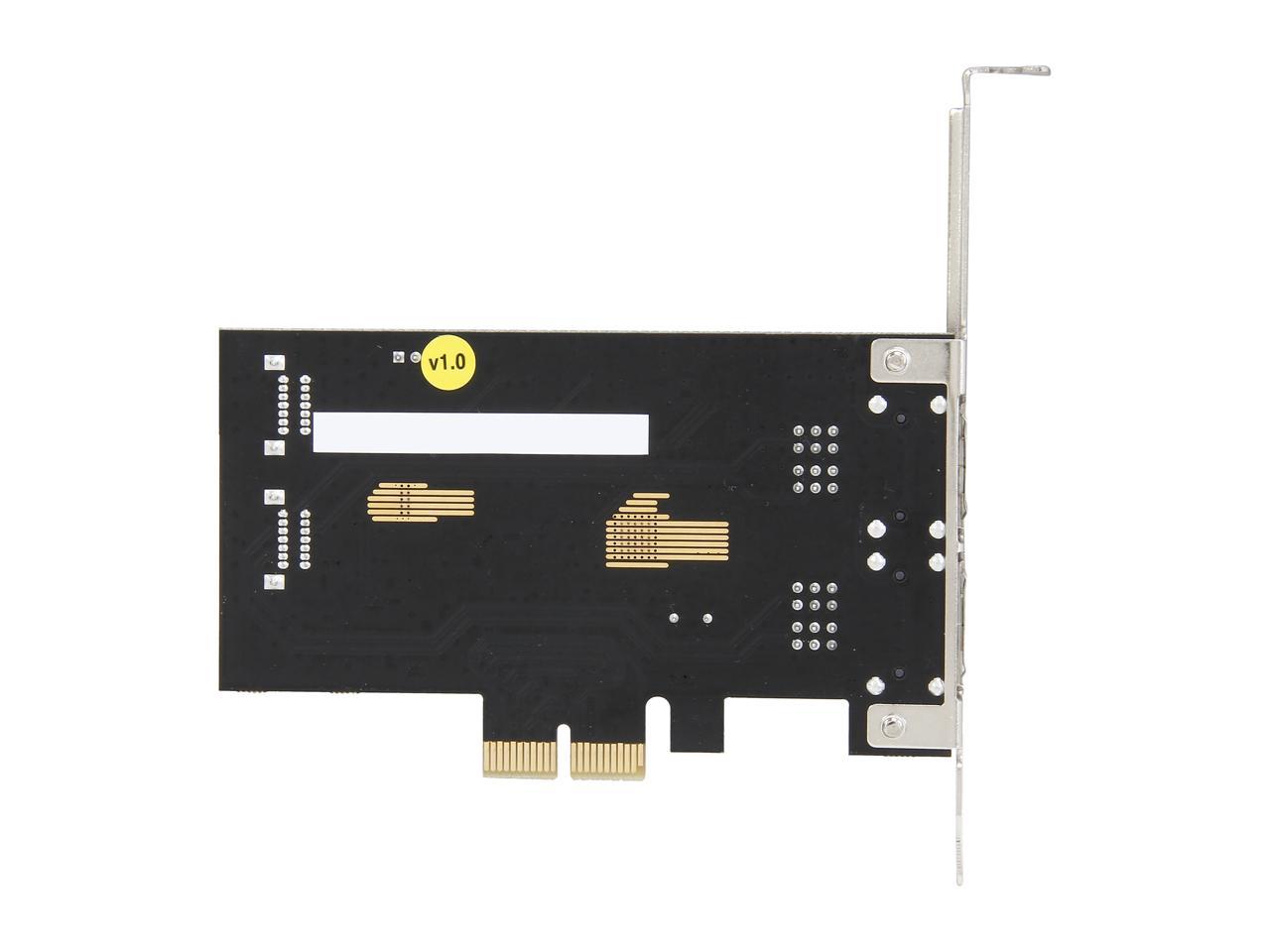 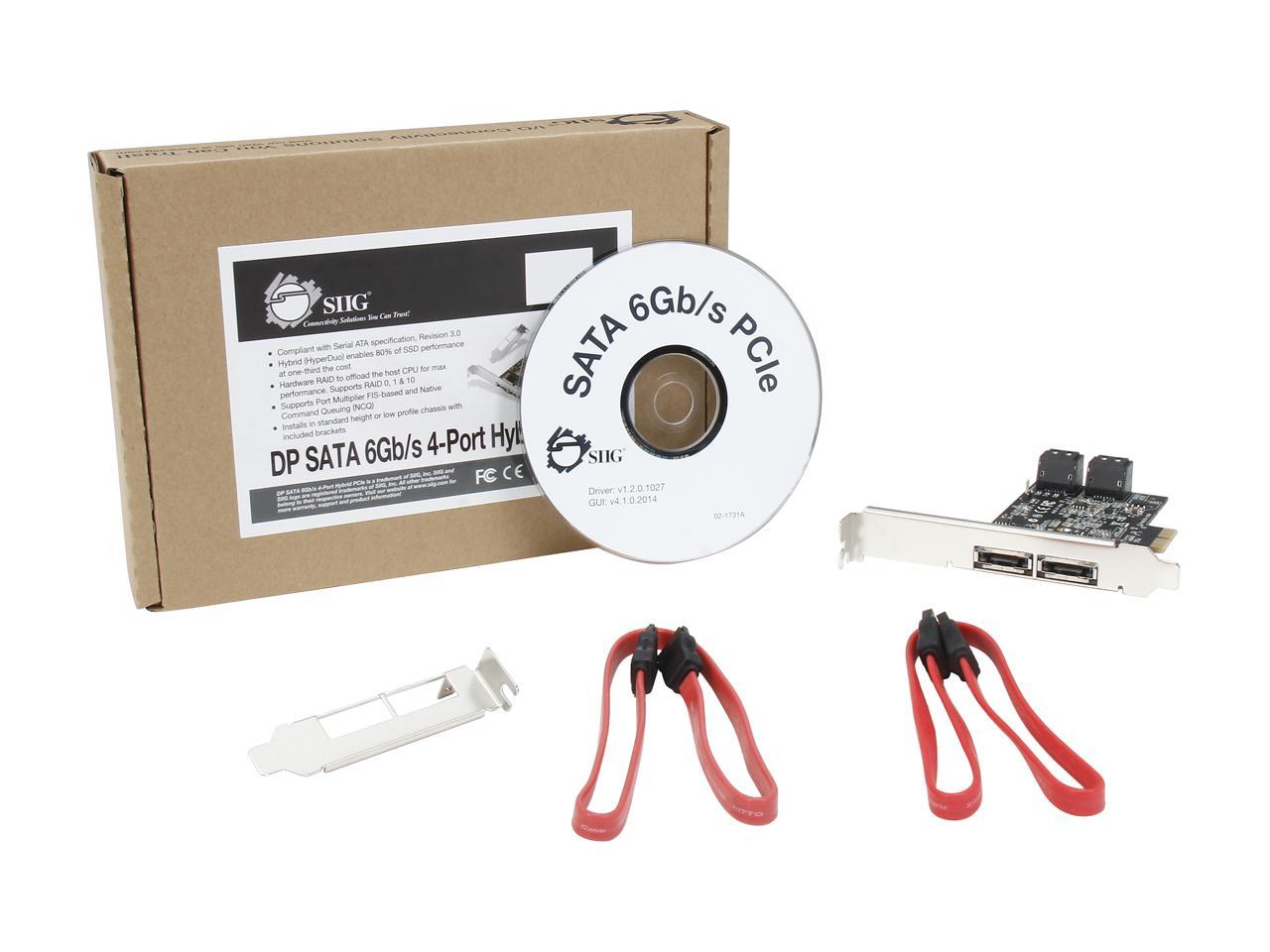 SIIG's DP SATA 6Gbps Four-Port Hybrid PCIe is a high performance, cost-effective hardware RAID (RAID 0, 1, 10) SATA host controller designed to enable SSD performance at less than 1/3 the cost. It is embedded with the latest breakthrough HyperDuo technology to work flawlessly with the leading 6Gbps HDDs and SSDs. It enhances system performance by significantly reducing system boot-up time while allowing data to be stored on the high capacity SATA HDDs. With the built-in fully-automated HyperDuo technology, this Hybrid PCIe SATA controller can help customers benefit from the high performance of SSD acceleration and high capacity of HDD data storage. Pros: For what it is designed for; FAST! Keeping in mind it will not ever reach the full 6Gb/s XFR Rate a true native SATA III Port can deliver but it does give 33% increase on SATA II [At least on my GA-X58A-UD5]. But not all 4-Ports are equal.

Cons: Was utilizing Port-0 for the OS with other 3 Ports for various devices namely; PageFile located on SSD, Applications on SSD & Personal Data located on SSD. Noticed a decline in response time of OS as compared to other Ports Devices, Performed ANVIL test and found Port-0 was inferior compared to other 3 Ports. Contacted SIIG & they agreed to replace with me footing S&H bill to them.

Overall Review: Once SIIG was presented with my test they readily accepted fact I had a somewhat malfunctioning 4 Port card & presented me with RMA immediately. 5 eggs for SIIG.

Pros: * Both eSATA and SATA on one card * eSATA ports support port mulipliers (multi-drive enclosures) * PCIe-x2 instead of x1 means it has the bandwidth to saturate 1.5 6Gbps SATA ports, which means it shouldn't be possible for the card to be a bottleneck unless you are putting multiple SSDs on it.

Cons: * Looking at the card, you might think you could use all 6 ports -- but the eSATA ports are each used *in place of* one of the SATA ports -- you have to jumper the card to pick one or the other from each pair, so only 4 ports total are available at any time. * The silkscreened labels on the board for enabling each of the 2 eSATA ports are not that obvious and intuitive, and there was no manual pointing them out. * Requires at least an x2 slot (which I don't think exists?) so you generally end up putting it in a x16 slot. Might as well make it x4 to support maximum throughput of multiple SSDs.

Pros: Easy to setup, small, easy to fit into smaller cases. Flexibility of 2 internal, 2 external, or 4 internal, marvel chipset. Works in Windows 7 and Ubuntu (desktop and server) 14.x, and uses x2 PCI bandwidth. Works in x4, x8, and x16 slots (make sure your x16 slots are NOT graphics only ports, haven't found any like this, but be aware).

Cons: Does not appear to work well with onboard controllers

Overall Review: I have used this card in a Windows 7 x64 desktop with Intel DX58SO, 4 internal, 1x port used with a backup drive, 1x port used for Intel 240GB 530 SSD as boot drive, and 2x ports used with a 2x 2TB WD black mirrored (Raid 1) setup data drive. It worked and was an improvement (slightly) over the onboard Intel controller/components on the DX58SO (which were only SATA 2). This is a PCI Express 2.0, x2 interface, so make sure your motherboard can support a x2 2.0 interface. Now, onto the bad which may or may not apply to you. After upgrading my wife's computer to new equipment that had native SATA 3 support and RAID, there was no need for this card. It was given new life as a controller on an ASUS Rampage motherboard, E8400 processor, 8GB of ECC RAM with Ubuntu 14.x server (media server) to expand the motherboard's 6x SATA2 ports with 4x SATA3 ports. I put the OS/SWAP drive on the SIIG card on an SSD, along with 3 of my most used/best drives attached without RAID. Transferring between the devices on the card worked perfectly, no issues. But, whenever I did long/large transfer from the card to the motherboard SATA 2 ports/drives or vice versa, I would get an error and the drives in the server would no longer be accessible in the OS (can't remember if it was the SIIG controller, the motherboard, or both controller that appears to be hosed up and spewing errors when I tried to access a drive) and I would have to bounce the server. Now, since the card doesn't officially support Ubuntu by SIIG documents, but according to other reading, the marvel chipset on the SIIG card is supported in kernels newer than 2013, it should not have been an issue. In any case, I ditched the card from use in the media server and spent proper money buying REAL HBA cards from a well know manufacturer for that type of product. To be fair, when I ditched the SIIG controller in favor of 2x 8 port HBA/RAID cards, I also ceased using the motherboard SATA 2 ports. So, without further testing, the problem could have been with the motherboard controller not playing well with the SIIG - that's a possibility I have to concede. For that, I removed only one egg. SIIG has always made good products, and I would use SIIG again, of course, this is a Marvel chip for the controller and they are widely used in motherboards and OEM solutions without issue. According to the current info on the SIIG site, Windows 10 natively supports this card (drivers not needed), Windows 7 and 8 drivers are available there. I don't see officially a Windows 10 GUI download on the SIIG site, but you could probably use the Windows 7/8.x version - not sure about that. On the issue of the Control + M to enter the BIOS. I had this issue too, but I solved it. I can't remember how, but I think the problem was until you add 2 drives to the controller, the RAID BIOS won't show up and it will just remain an HBA. Don't quote me on that, but I stirred on that for a long time and the documentation didn't say that as a requirement. Also, one last item to consider. The nice thing about using a card like this for RAID as opposed to a motherboard port (beside speed if your motherboard only supports SATA 2) is that when you take this card from computer to computer, your RAID volume should survive and be completely compatible with whatever you put it in (data drives only, but boot drives might work too). Sometimes, changing motherboards from one manufacturer to another using different RAID controller chips from different manufacturers, the RAID volumes have to be redone. So if hardware upgrades and RAID migrations of data volumes are important to you, addon RAID cards become a nice luxury - imo :)

Pros: This has been providing a RAID 1 volume to my Fedora box for three months. Write performance is much better than software raid.

Cons: I have not found a way to pass through SMART data or even get a volume health report. I will have no idea if a disk has failed.

Overall Review: Early Linux driver problems have been resolved. It worked out of the box for me using the ahci driver.

Pros: Works great so far. I'm using this with a 500GB Samsung EVO SSD as a scratch disk for video editing. Originally that drive was connected via a 2-port SYBA SATA card and the throughput was limited to about 200MB/s. Now, I consistently get 480+MB/s. MB is a Rampage III Extreme and all 8 existing SATA ports are used as: RAID 1, 10, and BD drives Windows 7 Ultimate 64 Primary applications: Adobe Premiere, Media Coder and After Effects CC

Cons: Arrived with the metal tab on one eSATA port mangled but after a bit of fiddling with needle nose pliers it seems usable

Overall Review: TIP: I did not use the included CD and instead went directly to the SIIG website and downloaded the latest drivers prior to the install. According to SIIG, if you're running Windows 10 you don't need manually install their drivers as Windows 10 provides them.

Pros: Supposedly allows 6Gb/s SATA III on my old SATA II mobo. Supposedly does something to work with or be compatible with my hybrid HDD's for benefit from the SSD cache presumably. Has hardware RAID feature.

Cons: Blue screens on every third boot. Blue screens four times per day while in use, new O.S. install, (Win 7 pro x86_64). Kernel dumps point to this driver. No patched or upgraded driver available. Using two new 4TB SATA III hybrid drives purchased with this (in RAID 0). Partitioned to 1.8GB for Windows - remainder reserved for file storage. Ready to throw this thing away and replace mobo, cpu and ram, get a proper Areca HW RAID controller. This thing just didn't work for me on this system. It's a Marvell chipset.

Overall Review: No web configurator, just BIOS configurator. This thing is probably not a good choice for anyone seeking a hardware RAID controller. I am disappointed with it.

Pros: I am running Windows 10 on an SSD and wanted to add an internal storage drive. I shut down the computer, installed the card, booted into the card's BIOS via Control + m right after my mobo BIOS, and then configured the array. Simple as that. Then I went into disk management in Windows and formatted the new drive to GPT (MBR is for 2TB or less NTFS, whereas GPT is 2TB + NTFS). The instructions are great, however, I wasn't installing Windows 10 so I didn't need them.

Cons: None at this point.

Overall Review: I originally bought a Syba card but the Marvell chipset was incompatible with my mobo integrated Marvell chipset. Now this card, which was $30 more, did the trick. Also, the warranty on this card is better.

Pros: I'm not sure what everyone is complaining about but I saw all the bad reviews and felt compelled to add my two cents; I've had mine for about two years working with four Western Digital Se drives in a RAID 1+0 configuration and have never had it fail or cause me other problems, and unlike software RAID I really don't have to worry if the underlying OS can support the RAID setup since this hardware RAID card will expose the underlying disks as one single hard drive. Being exposed as one drive at the hardware level is really convenient when switching back and forth between Windows and Linux, and particularly on Linux since the drive is seen as a /dev/sd* disk rather than numerous odd named disks like with software RAID.

Cons: Marvell tray monitor software seems rather unstable and reading the SMART status of the physical disks is somewhat cumbersome.

Overall Review: I would recommend this to anyone looking to get into RAID without spending hundreds of dollars, and you will notice a significant performance difference at a fraction of the price of a equivalent SSD setup. At this price point it might be a good idea to buy two or three as a backup just in case, or otherwise regularly backup important data, which is what prompted me to come back here and see all the reviews I mentioned earlier because I'd like to buy a couple more for just-in-case.