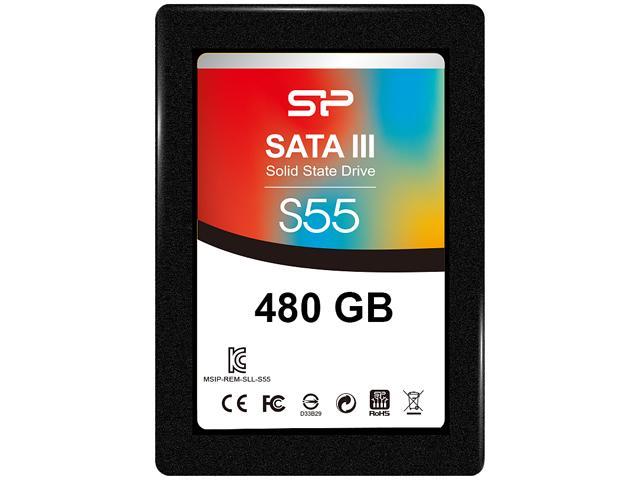 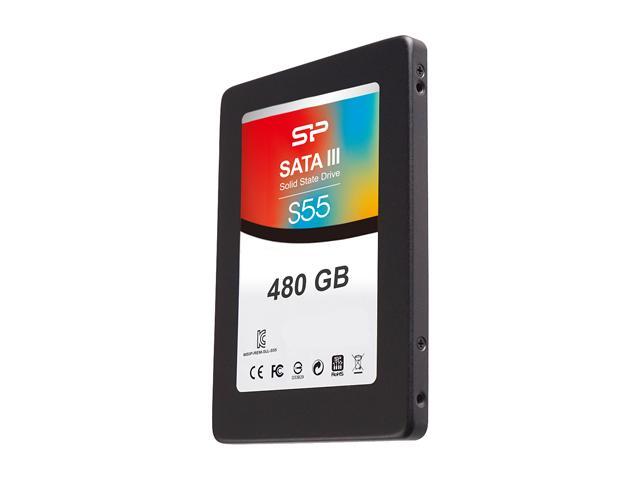 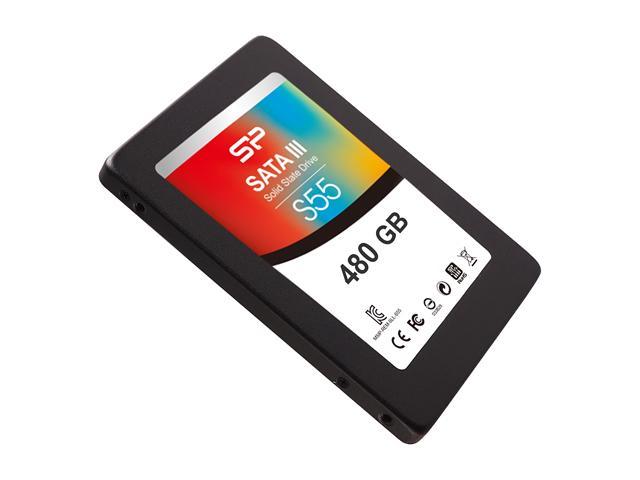 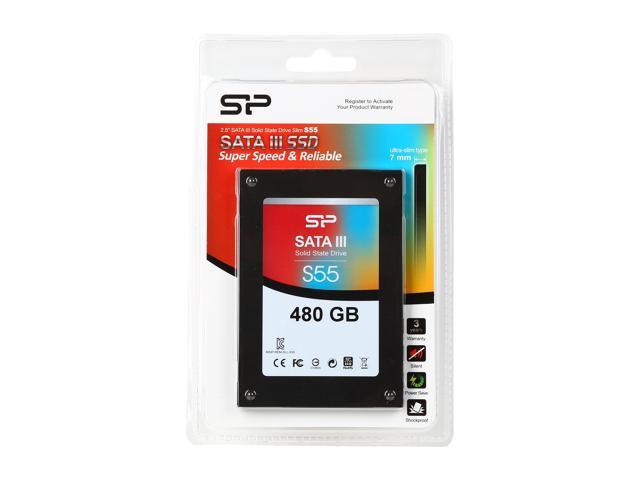 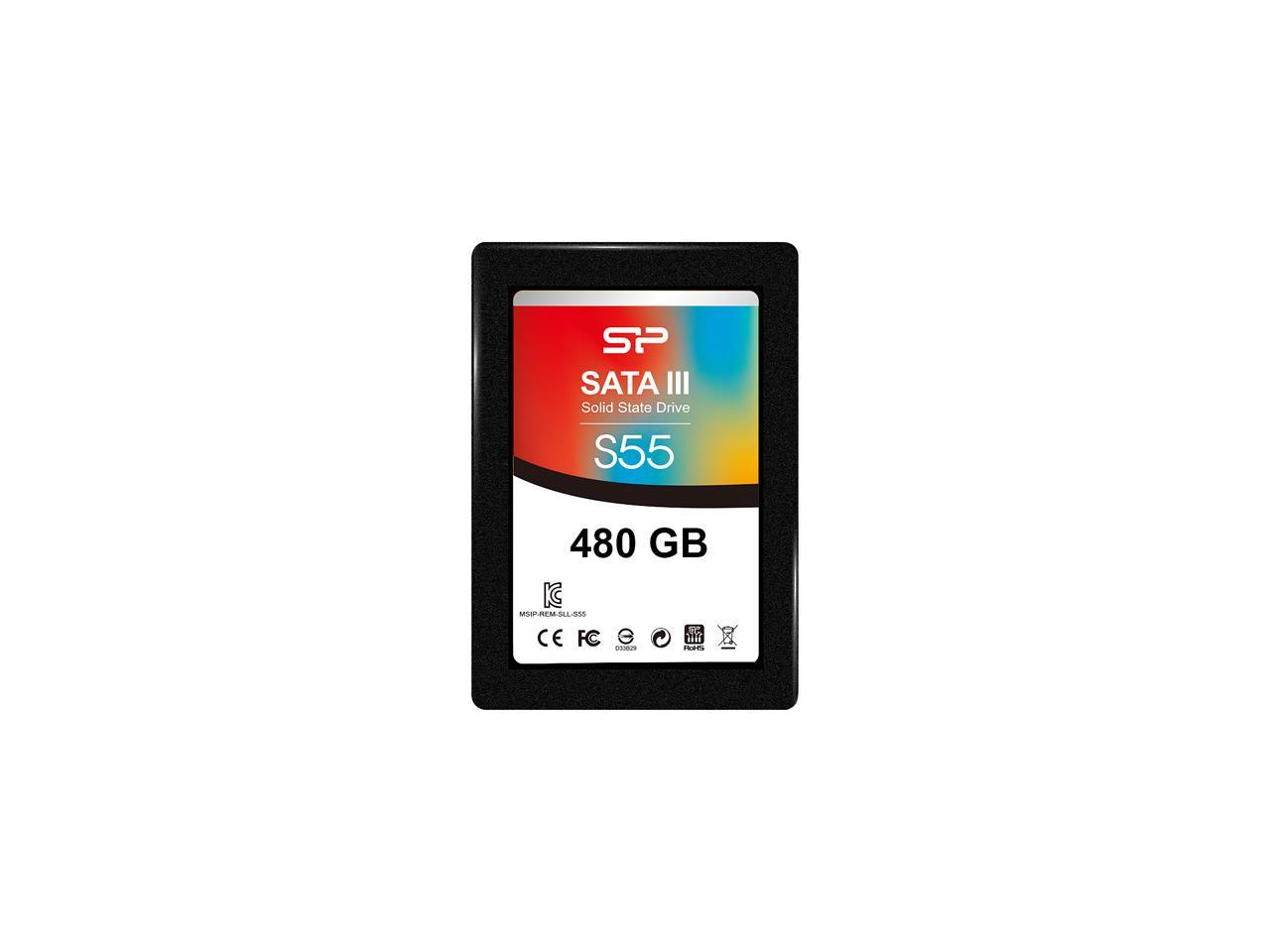 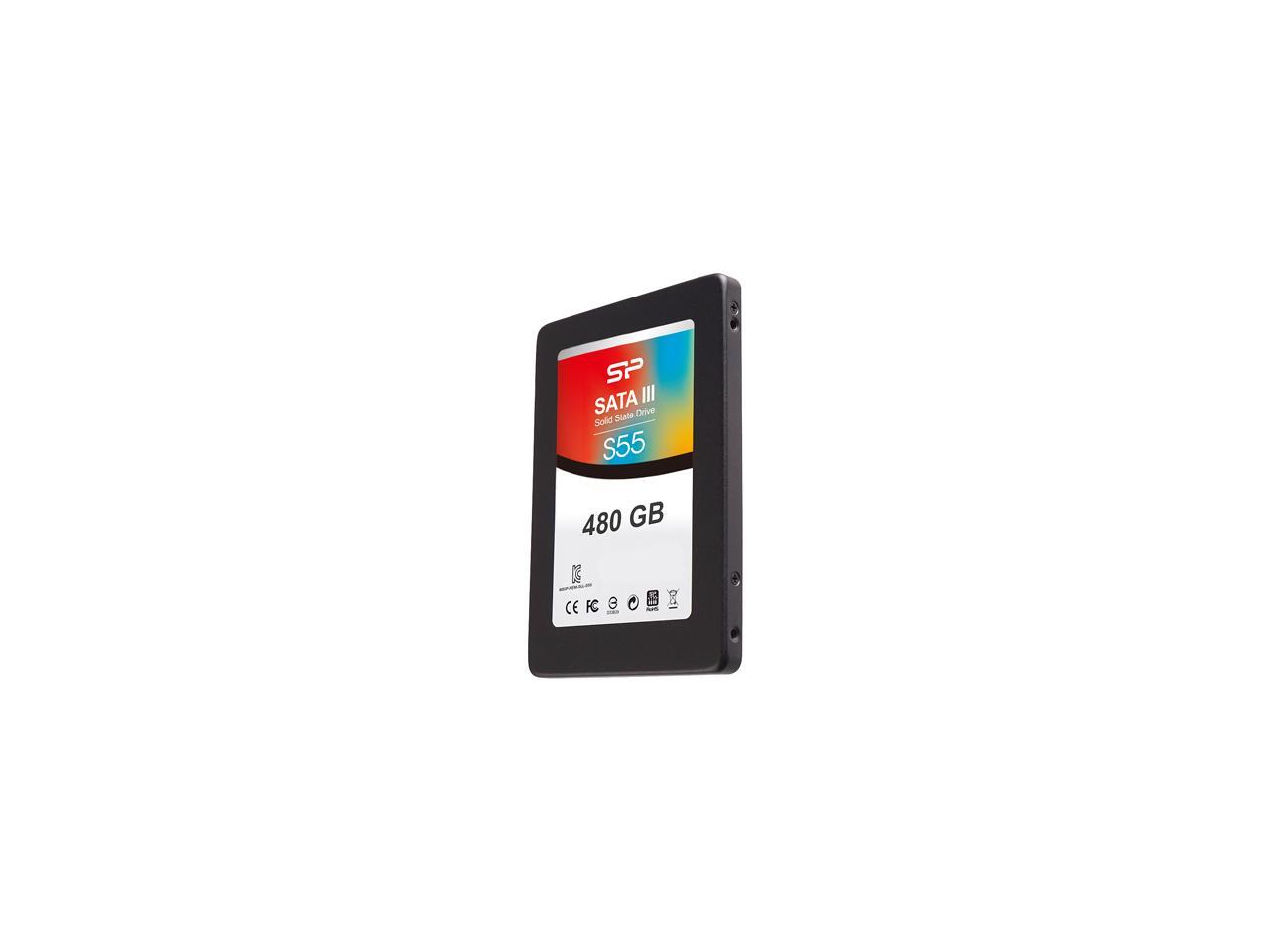 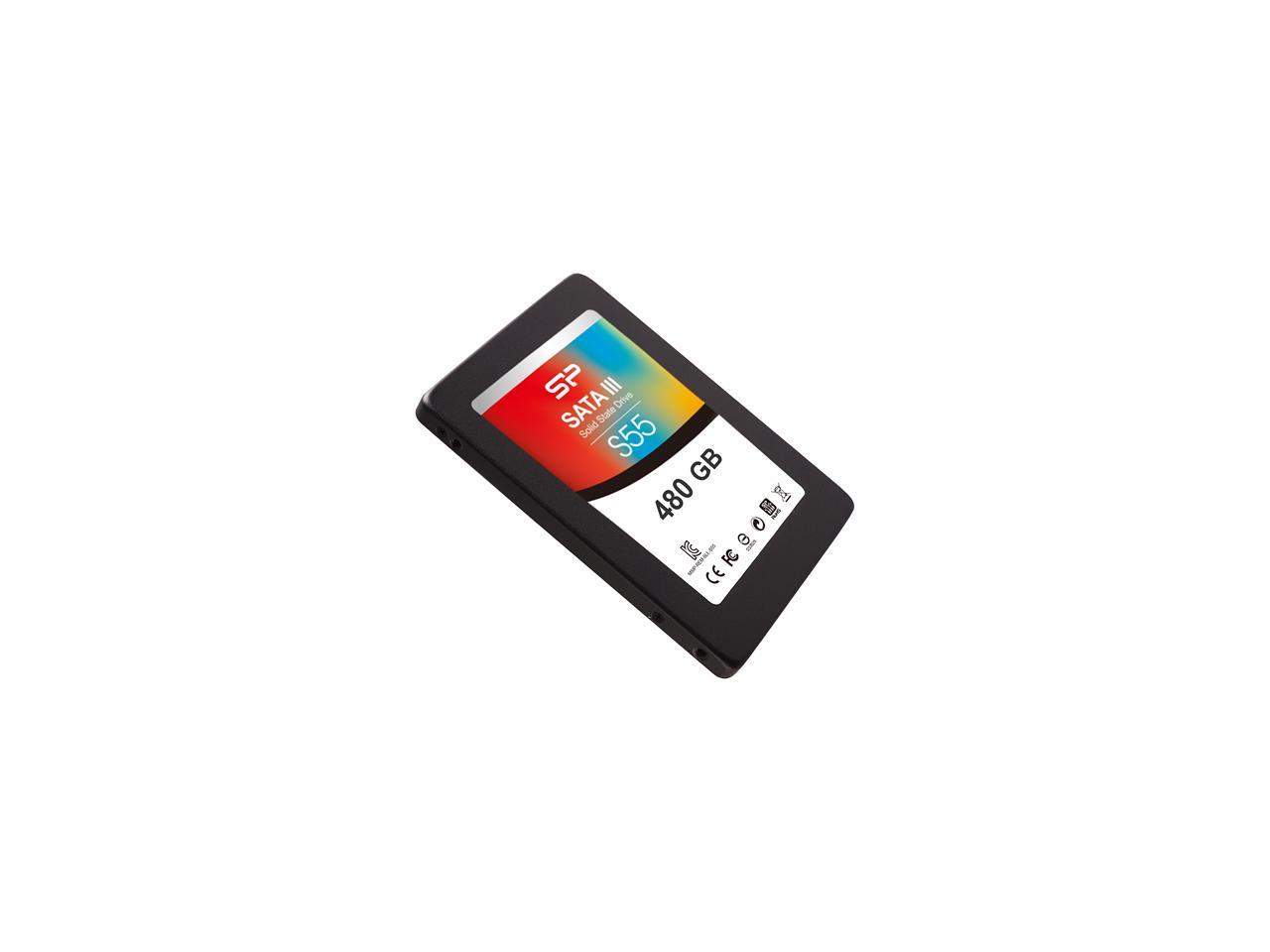 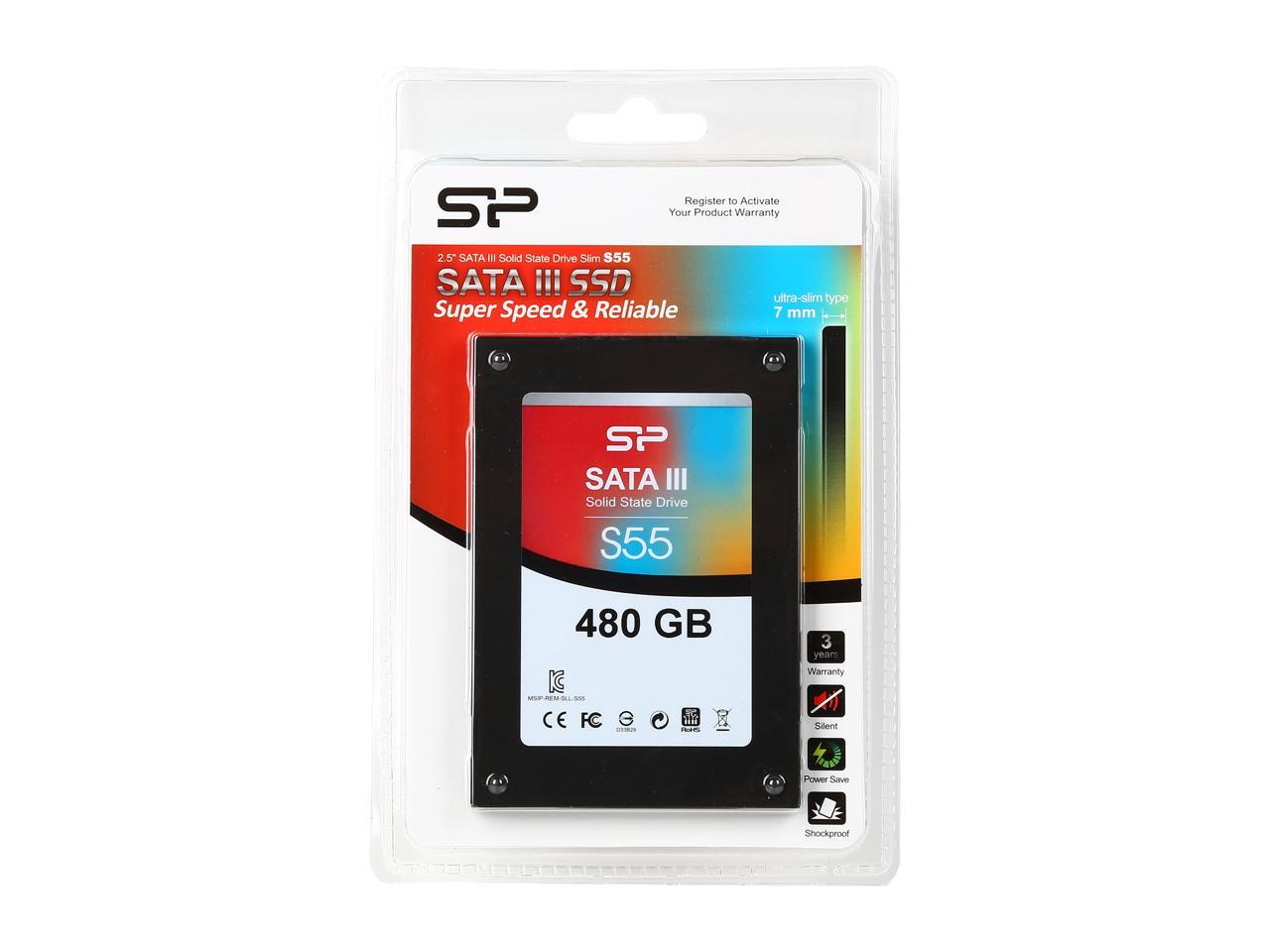 (511) Write a Review
In stock.
Ships from Hong Kong.
Most customers receive within 5-23 days.
Overview
Specs
Reviews
The Smartest Choice for System Upgrade
Experience faster boot-up and operation on your PC with the new Slim S55 SSD. It delivers everything you'd expect in an ultra-small, durable package: high-speed data transmission, maximum reliability, noiseless operation and low power consumption. It's sure to be the smartest choices for users who are looking to upgrade their system to a SSD.
SUPER-HIGH SPEED
The S55 is able to deliver incredible performance, reaching 540/510MB per second in read/write speed (CDM), providing "instant-on" responsiveness in your computer system for high-performance computing. COST-EFFECTIVE UPGRADE SOLUTION
Offering incredible performance at a surprisingly affordable price, it is no doubt that S55 is the superb choice for users who are looking for a cost-effective upgrade solution. TRULY A TIME SAVER!
Still wasting time booting up or loading your computer? It’s time to get rid of your old hard drive and switch to the SP S55 SSD. Powered by SATA III 6Gbps interface, the SP S55 is able to boot up your computer and launch applications within seconds. YOUR PERSONAL OFFICE ON THE GO
Featuring the latest SATA III 6Gb/s interface and advanced controller, the S55 provides the remarkable performance, which is ideal for heavy-duty users who are required to process large files and multi-tasking programs.

SLIM AND VERSATILE
Featuring an ultra-slim form factor measuring ONLY 7mm in width, the Slim S55 is the ideal choice for any system upgrade. Due to its small size, the Slim S55 is a versatile option that can be an easy and instant upgrade for any notebook, ultrabook, Home Desktop, or DIY Home Budget build.

WE CARE MORE ABOUT YOUR DATA
If a new disk contains one or more bad blocks, this may cause irreparable damages to your system. However, the SP S55 is built with Bad Block Management, which continually monitors and replaces bad blocks, keeping your system in good condition and prolonging the lifespan of your SSD. This is why the S55 offers a lower capacity than other SSD's, we have sacrificed capacity because we care more about your DATA!

Cons: 3 year warranty No software for cloning, monitoring or tweaking No frame thickening disk. A vendor, to provide a product at the lowest price must make decisions about parts. Do you really want to buy a package of the cheapest of everything? The pro reviews always crack open the SSD to report on the controller. In the 480 GB S55 there may be a Phison. SP doesn't give out this data that I can find on their web page. Why? TLC. Web Chat is still not available. Phone support is not toll free

Cons: If other SSD manufacturers don't want to lose money due to too many competitors, stay out of the SSD market. It's not worth it for both consumers nor manufacturers. No one wants a crippled SSD when there are cheaper and better alternatives. People will do more research when faced with too many SSD choices. I wasn't able to update the firmware nor make the SSD utility work and I am not surprised given I am using RAID and the lack of third party company knowledge.

Overall Review: Using RAID involves tweaking the bios, loading the Intel RAID driver during Windows installation and possibly using DiskPart. I installed the latest bios firmware and RAID driver before I did anything. Based on experience despite what you read on the reviews, the rated speed in the specs are fair indicators of expected performance especially comparing to other similar drives. The drive probably will still have 100% SMART health status after more usage, which is expected.

Pros: This SSD performed very well for me, I saw an average read rate of 280.2MB/s and average write rate of 163.7MB/s on my benchmark tests. The SSD seems to pull a faster write rate for awhile due to a write cache, writing at over 260MB/s for about 40% of my benchmark period, then dropping to around 85MB/s.

Cons: I haven’t found anything negative to say about this SSD, I am hoping for longevity and this may encourage me to check out other Silicon Power products in the future.

Overall Review: Even at its lowest write speed, this SSD is still faster than a traditional hard drive by far. SSD’s are a great way to provide a performance boost for your computer by reducing the amount of time spent waiting for reading and writing of files. I have personally been switching everything except my largest storage over to SSD’s to enjoy the speed benefits. Seeing the positive performance of this Silicon Power drive at a very low price point, I may buy some more SSD’s from them in the near future.

Pros: I was impressed by this drive's performance. Running CrystalDiskMark I was able to get 521 MB/s sequential read and 473 MB/s sequential write. These are a bit below the advertised speeds of 540 read and 510 write, but in practice it performed better than more expensive drives (like a Samsung 850 EVO). The SSD is definitely responsive, and should prove to be a huge upgrade for anyone still using a regular hard drive.

Overall Review: Depending on your SATA controller you may not get advertised speeds out of this SSD. When I initially plugged this into my motherboard I connected it to a SATA 6 port using a Marvell 88SE9172 controller. Everything worked, but I was getting considerably lower speeds out of this drive compared to the advertised speeds - 362 MB/s sequential read and 230 MB/s sequential write. This was much slower than the other SSDs in my system. The firmware was up to date, my drivers were up to date, but still the speeds were not as advertised. Eventually I tried connecting this to my motherboard's standard SATA controllers and that resolved all my issues. So be careful which port you plug this drive into - as it can be picky!

Pros: The biggest pro is the price point at which you can pick up one of these SSDs...at least at the typical sale price. In addition, the drive installed seamlessly. A simple jump into Disk Management and it was up and running in less than 2 minutes. When I installed the 240gb S55 I spent more time grabbing a sata cable (only to find a spare in my case already!) than I did provisioning the drive. But I truly cannot state it enough...I love how fast and easy this drive installs vs every other HDD that I've installed in 40% of my customer builds. After that, you're getting into pros of SSDs and not pros of this SSD, things like quicker speeds, better reliability, quietness, better power efficiency. However, that said, it is a great option for someone on a budget that wants to move into an SSD with large storage space.

Cons: There are a few minor cons...that don't really detract from the value of the SSD, but should be noted. This came in the dreaded hard plastic shell packaging. Every SSD i've bought in the last 5 years comes in cardboard packaging. It was a little annoying to have to find scissors... The packaging was not sufficient to protect the drive, so you're at the mercy of your shipping provider. It was literally a sheet of maybe 50 mil plastic that was protecting it... The warranty was only 3 years, seems to me most of my recent SSDs were 5 year warranties. I did spot check and only 2 of 5 SSDs that I clicked on were 5 year warranties. I'm guessing since I typically buy enterprise drives for customer machines is the reason for the additional warranty. But even w/ that said, 3 years is on the low end of warranties. I know it's not a huge deal, but the plastic used in the drive felt cheap. Granted you're not buying it to rub it all over your body, you're buying it to store data...and store data it does. But felt it work noting under the pretense that if they are cutting costs & using cheapo casings it might also lend true for the nand they're using too. Firmware upgrades were not pleasant and overly laborious. Advertised speeds are marginally slower than other SSDs in this segment.

Cons: Crowded market in the SSD space in this price range. Can't really think of any since I haven't had any issues in the couple weeks I've been using the drive...see other thoughts

Overall Review: This is a solid upgrade for someone looking for a new or replacement drive, or anyone looking to boost the performance of a computer that is currently running a mechanical drive. I wanted an SSD to speed up load times, and boot times of my laptop. It's only a couple years old, but the mechanical drive is really really slow, and it's obvious that it was affecting the general performance (sluggishness at times, mostly). This drive was priced right, so I gave it a shot, and couldn't be happier. The read/write speeds are well-within advertised range, and the one thing that was dragging down the performance of my laptop down is no longer an issue! My laptop has only one hard drive bay, so I had to weigh the option of keeping my 1TB drive, or giving up most of my storage in lieu of performance. In the end, I didn't have to choose! There are universal caddies that fit into your optical drive bay perfectly. So it was simply a matter of removing one screw, pulling the optical drive, and inserting the caddy (with SSD inside). I now have a 240gb speed demon for a boot drive, and 1TB mechanical drive for storage - can't beat it! This drive is fast, inexpensive, and has a decent warranty - get it!

Pros: -No-frills design & packaging -Good value -3-year warranty without a premium price to go with it

Cons: Minor Con: As described in the Other section, I use SSD System drives and mechanical drives for storage. In this case, I have 3-2TB WD Black Drives in RAID0, which easily has a transfer speed of 250 MB/s. Yet, when I transfer files between the system & storage drives, the transfer slows down to ~100 MB/s and, as I look at other reviews for the S55, I see I am not alone. I suspect the controller is the culprit. Something to be aware of/Minor Con: As with many SSDs these days, there are no extras with this drive, not even a plastic shim to make it thicker if needed. Because some laptop mounting options depend on the thickness of the drive being a certain amount, make sure you plan ahead with this drive.