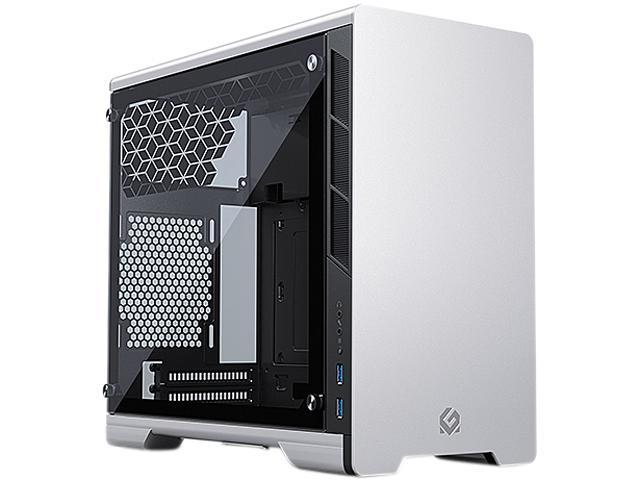 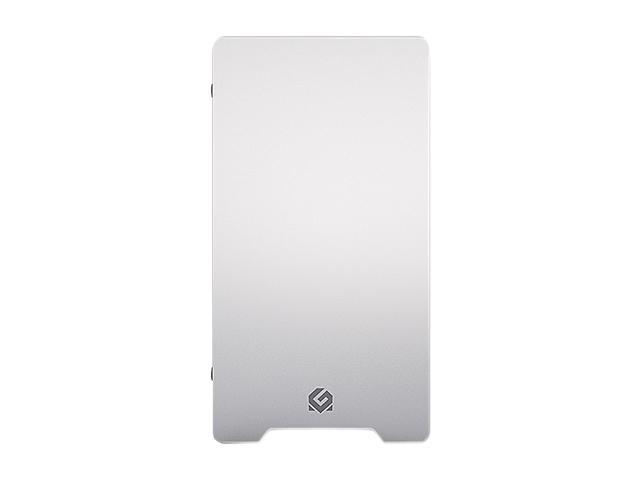 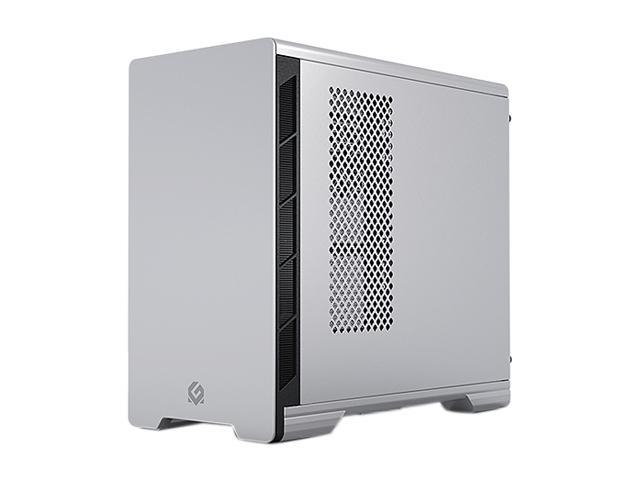 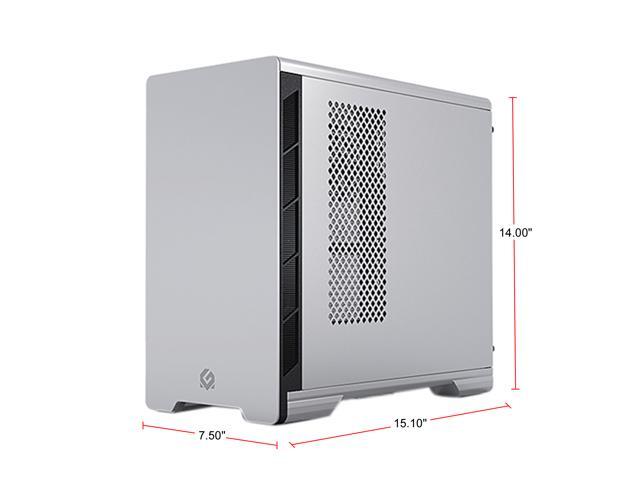 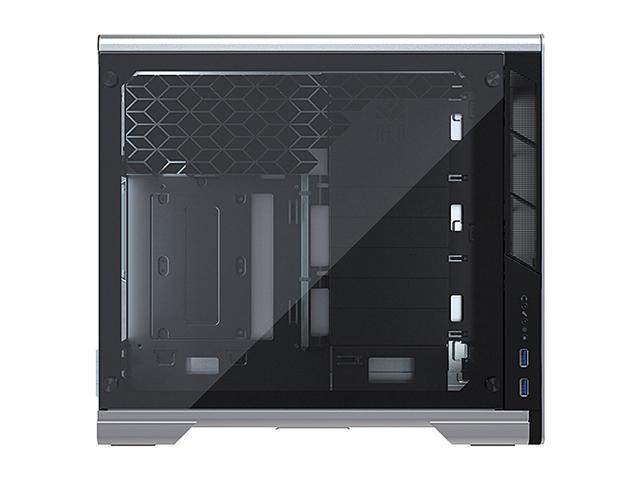 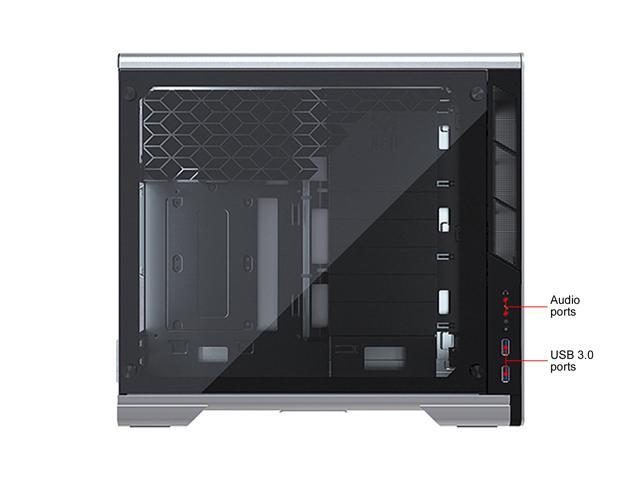 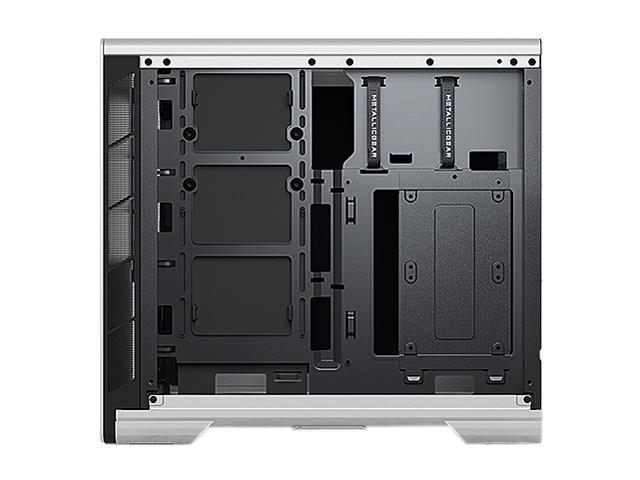 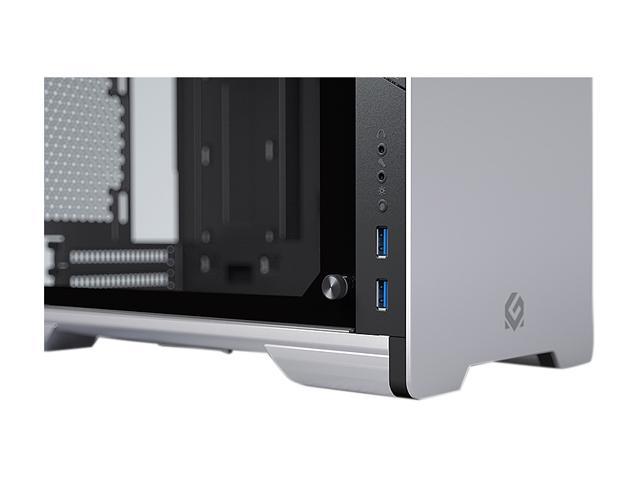 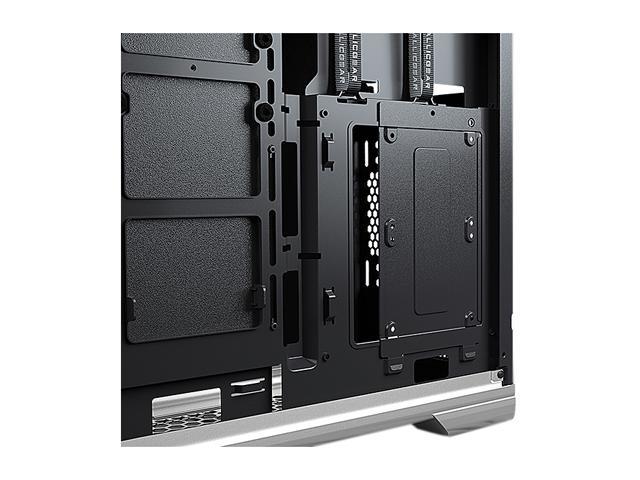 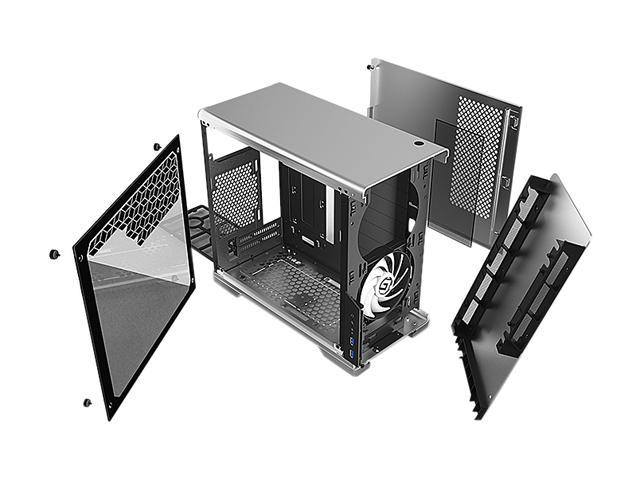 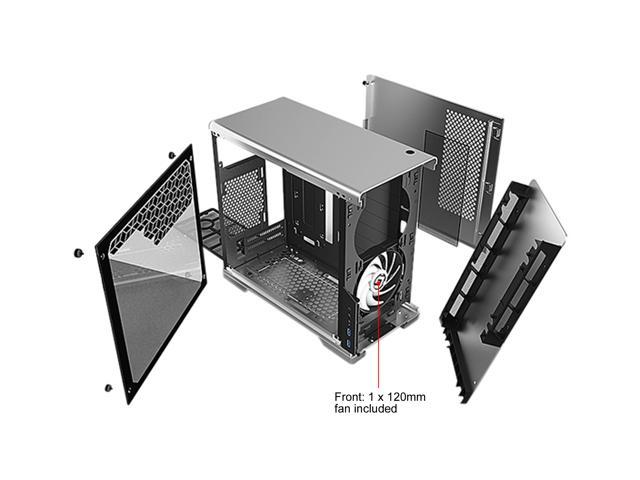 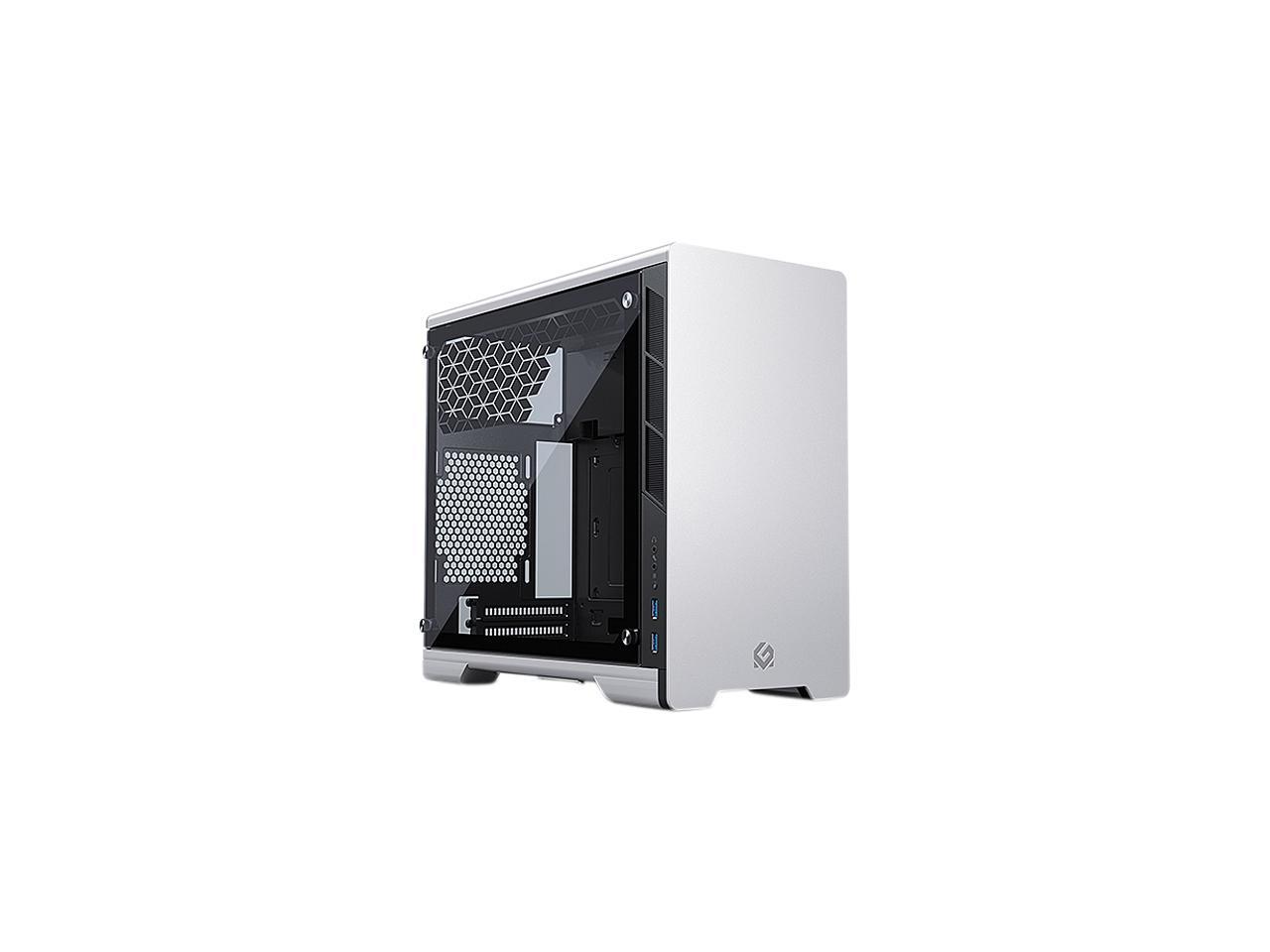 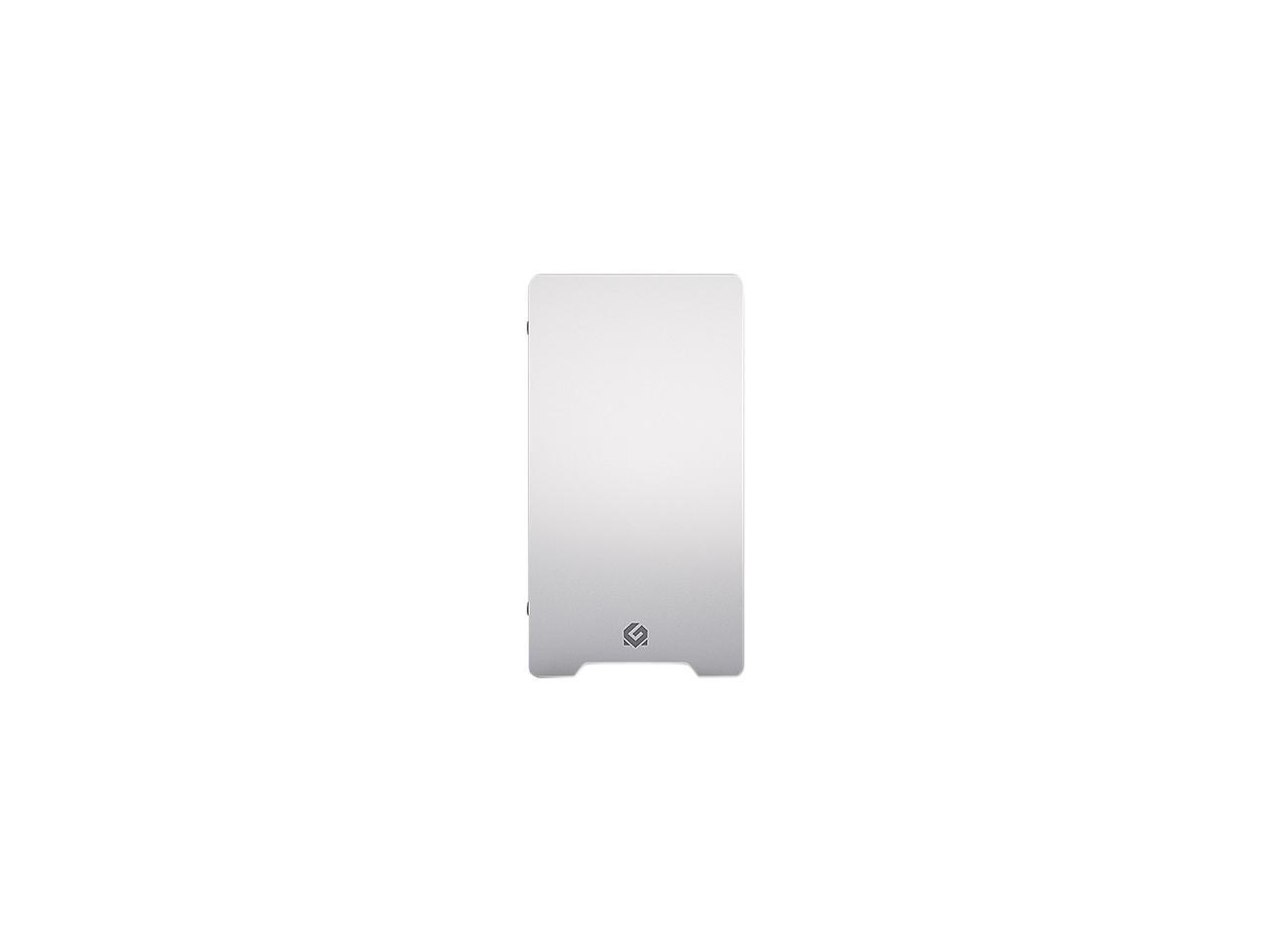 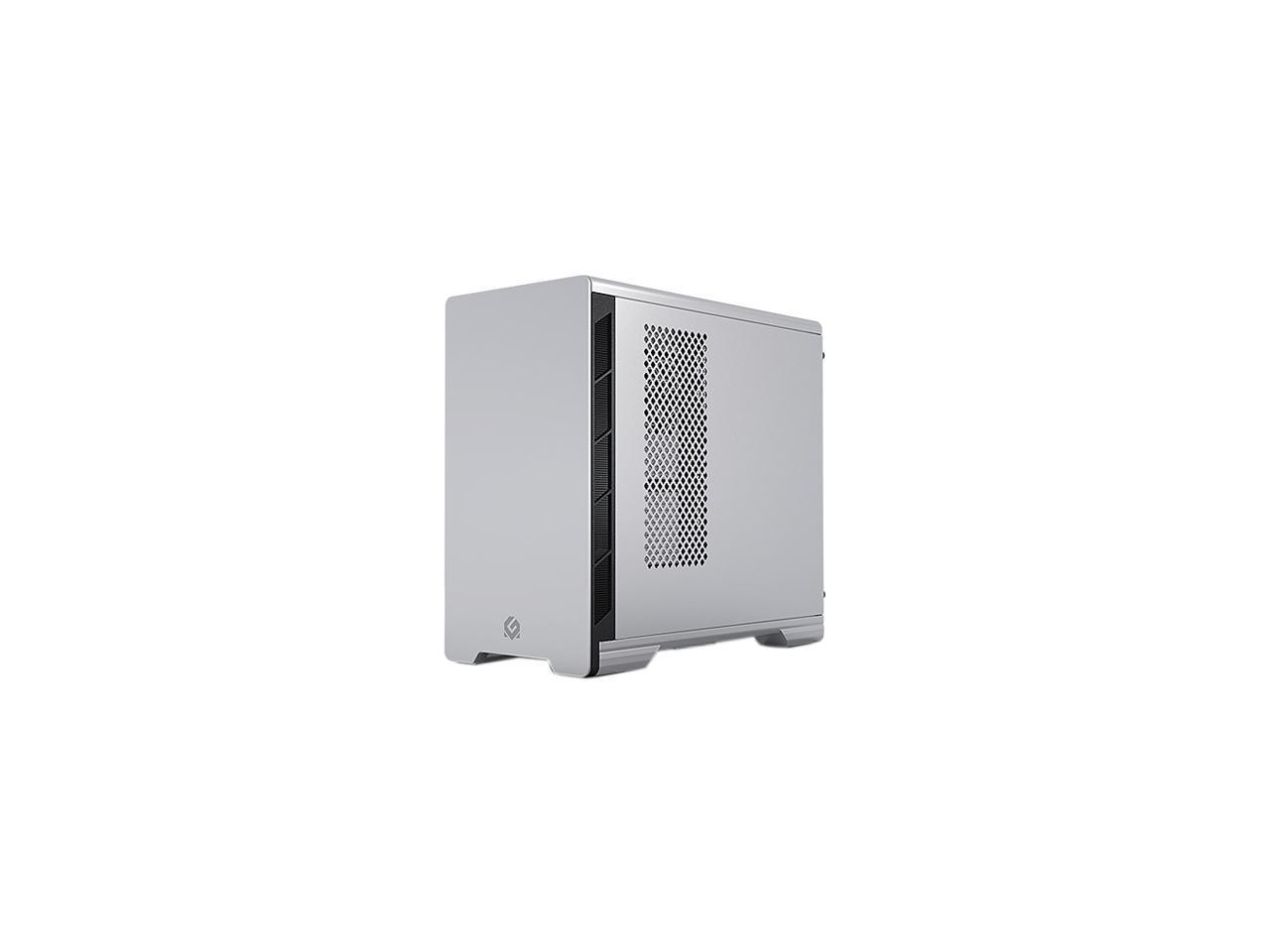 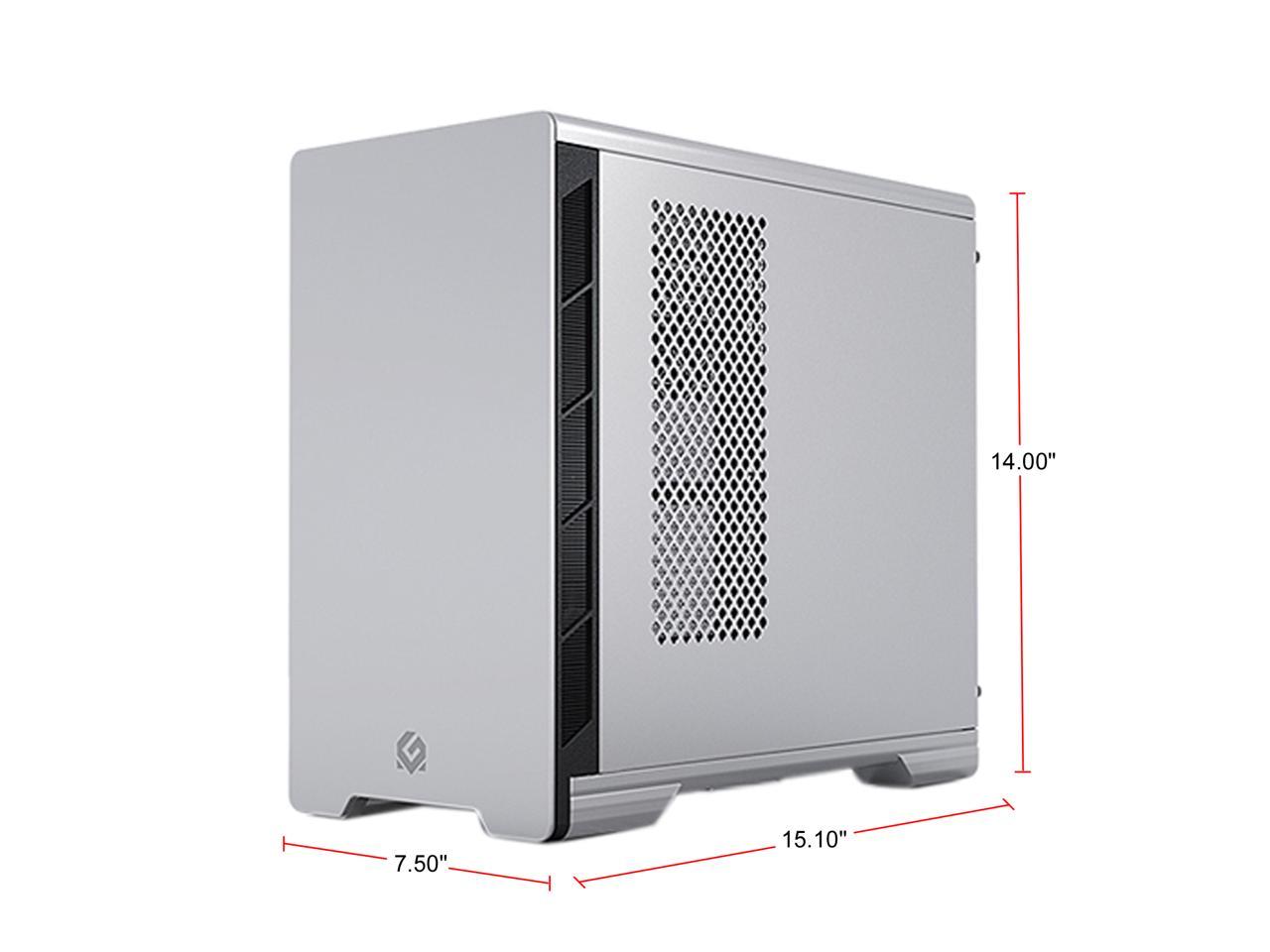 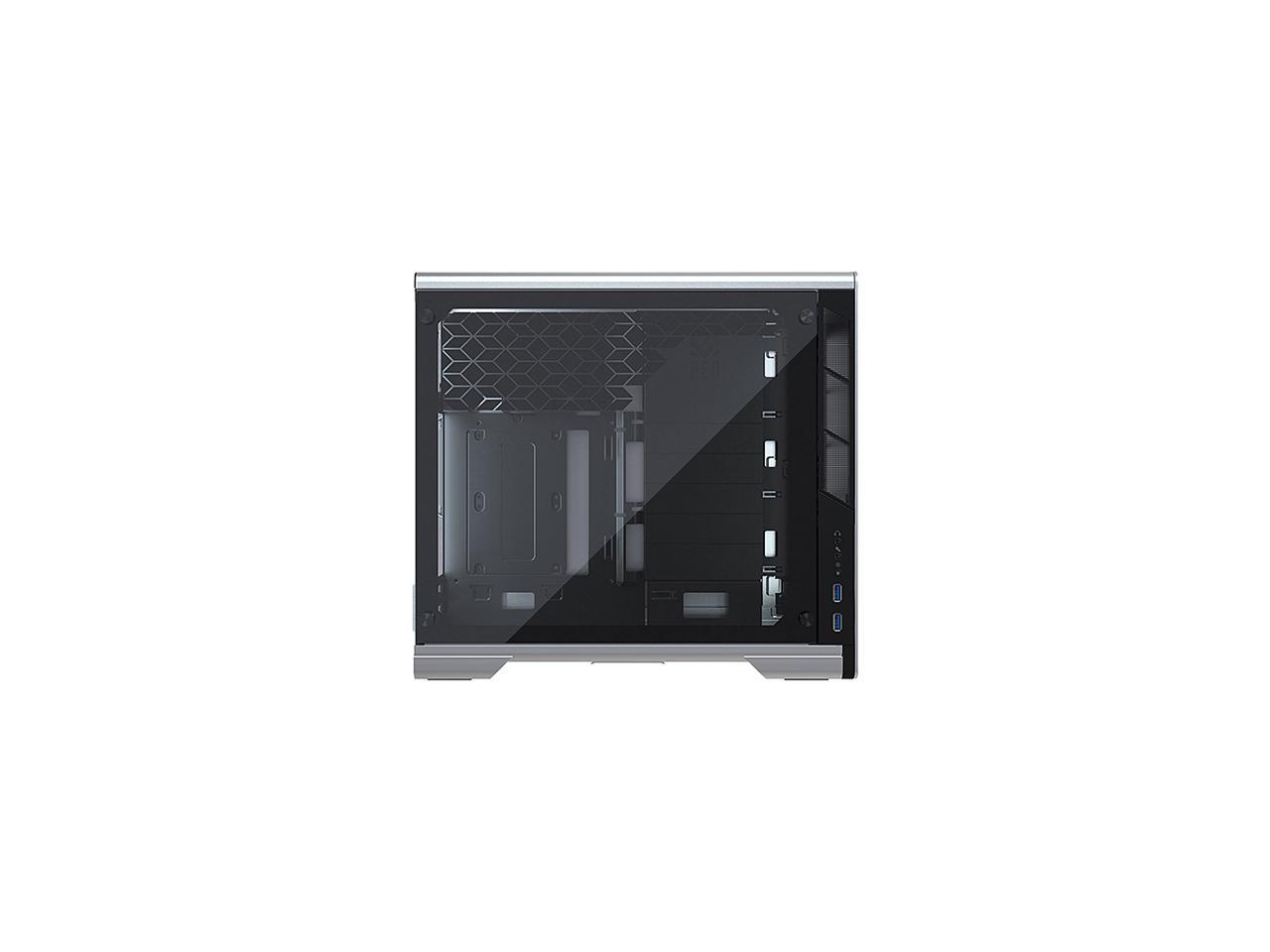 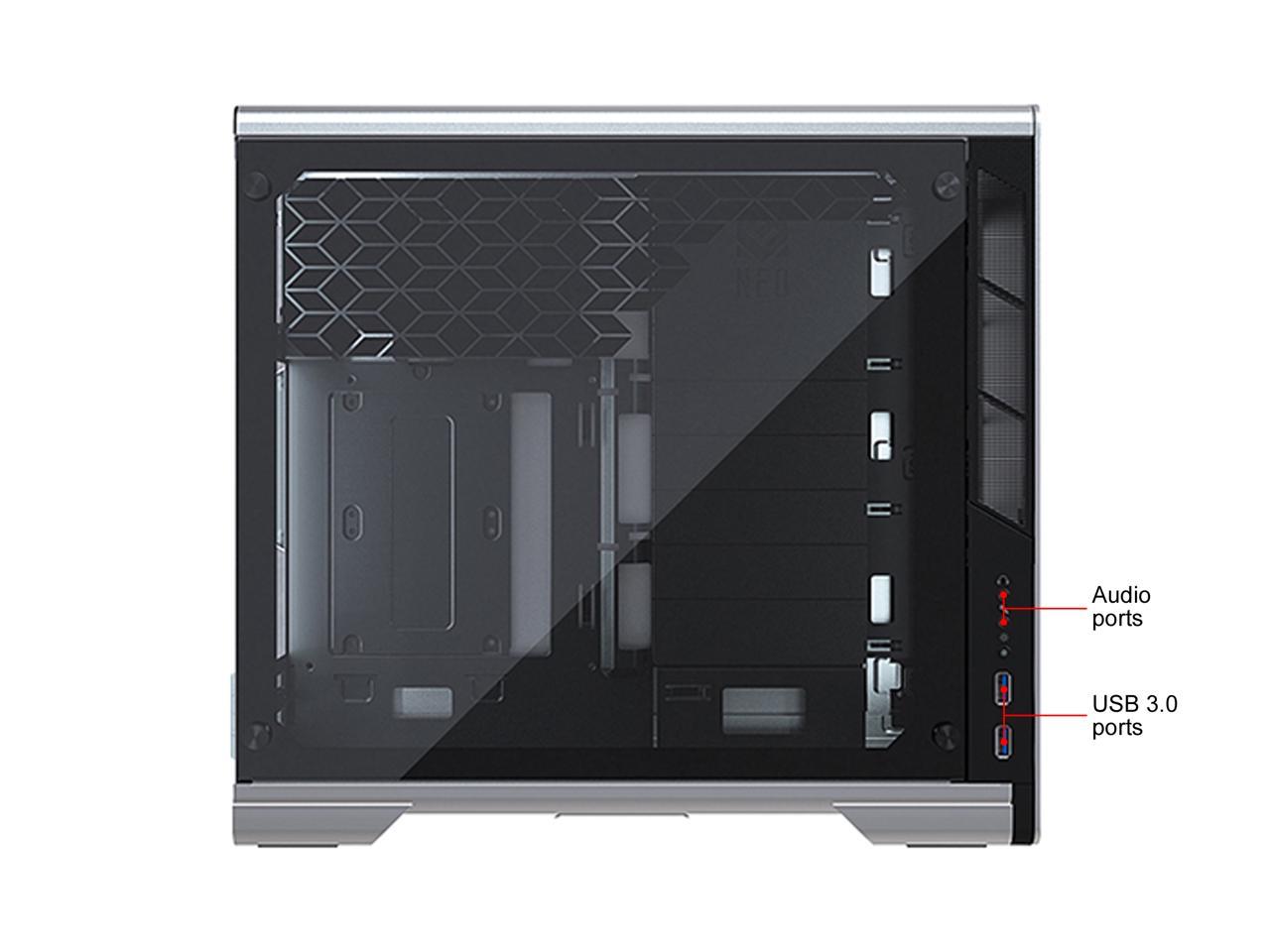 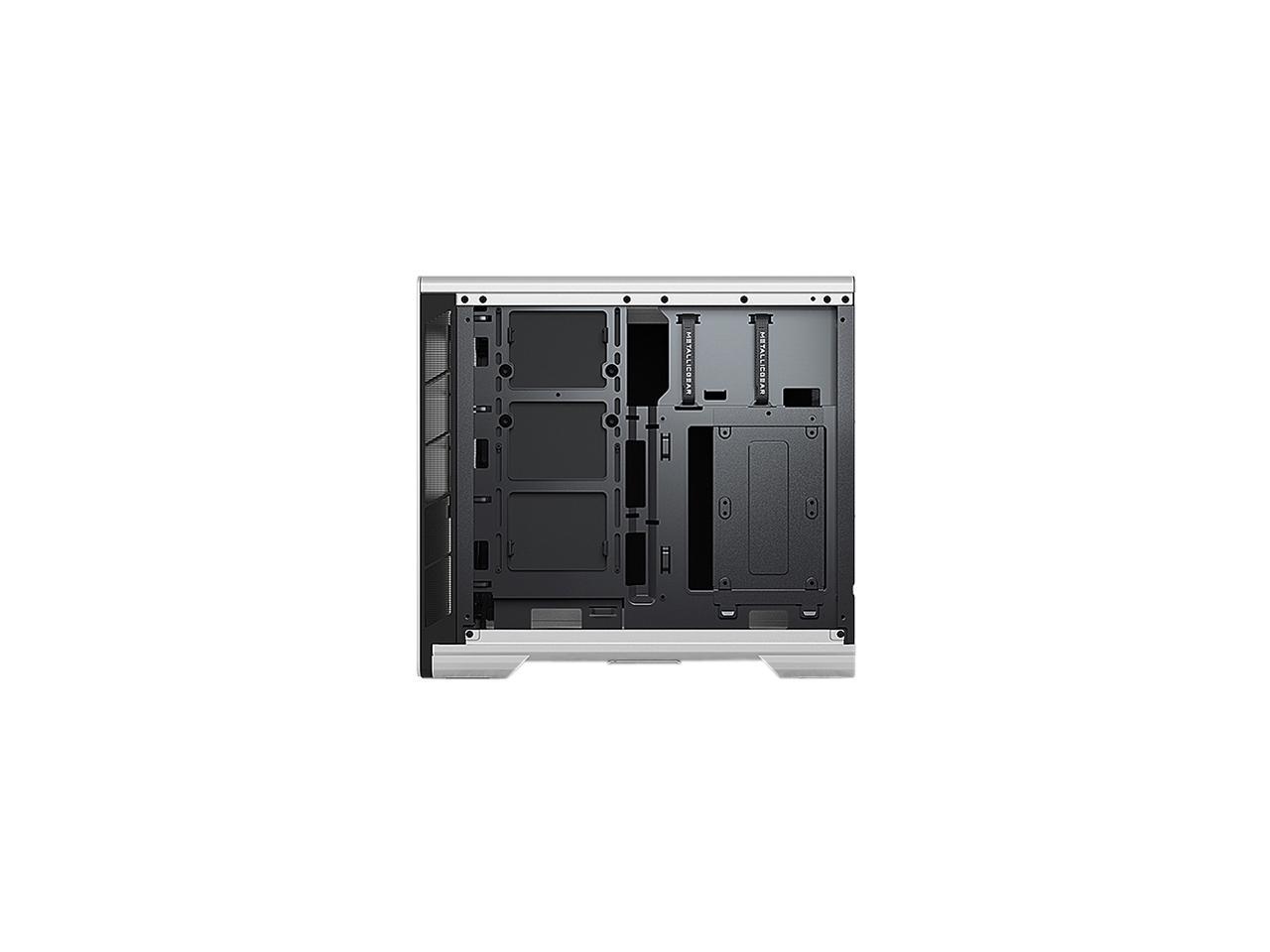 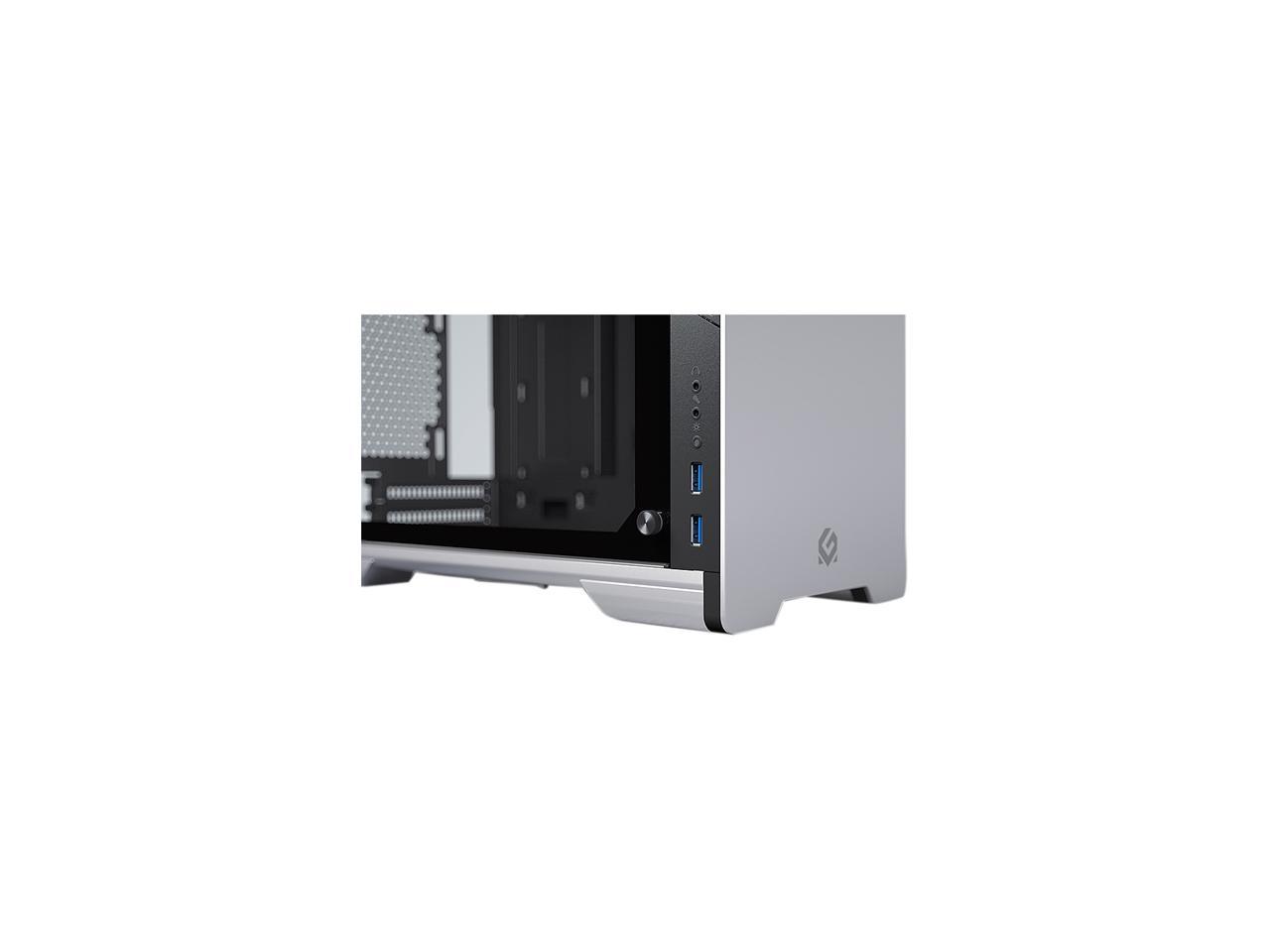 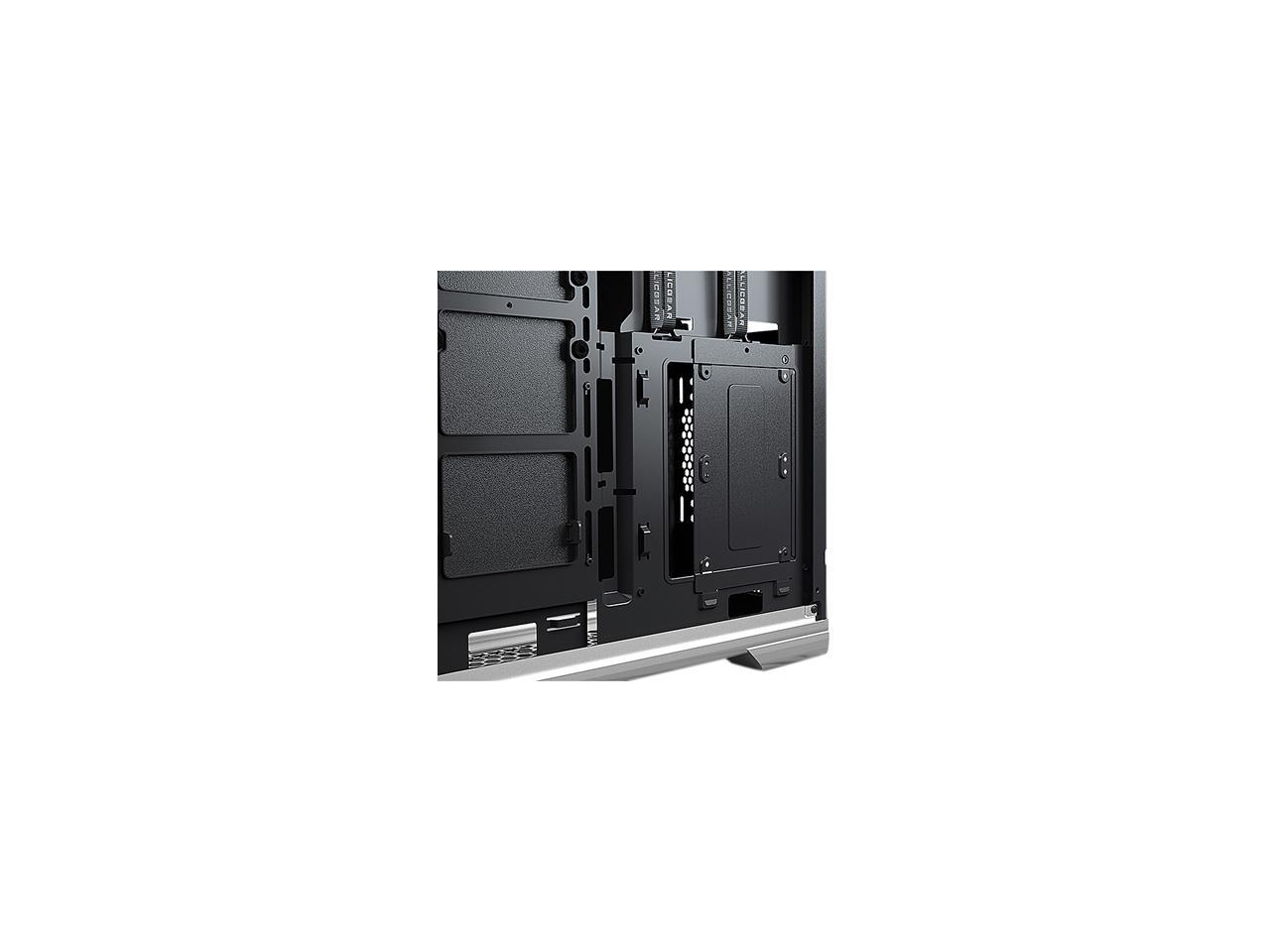 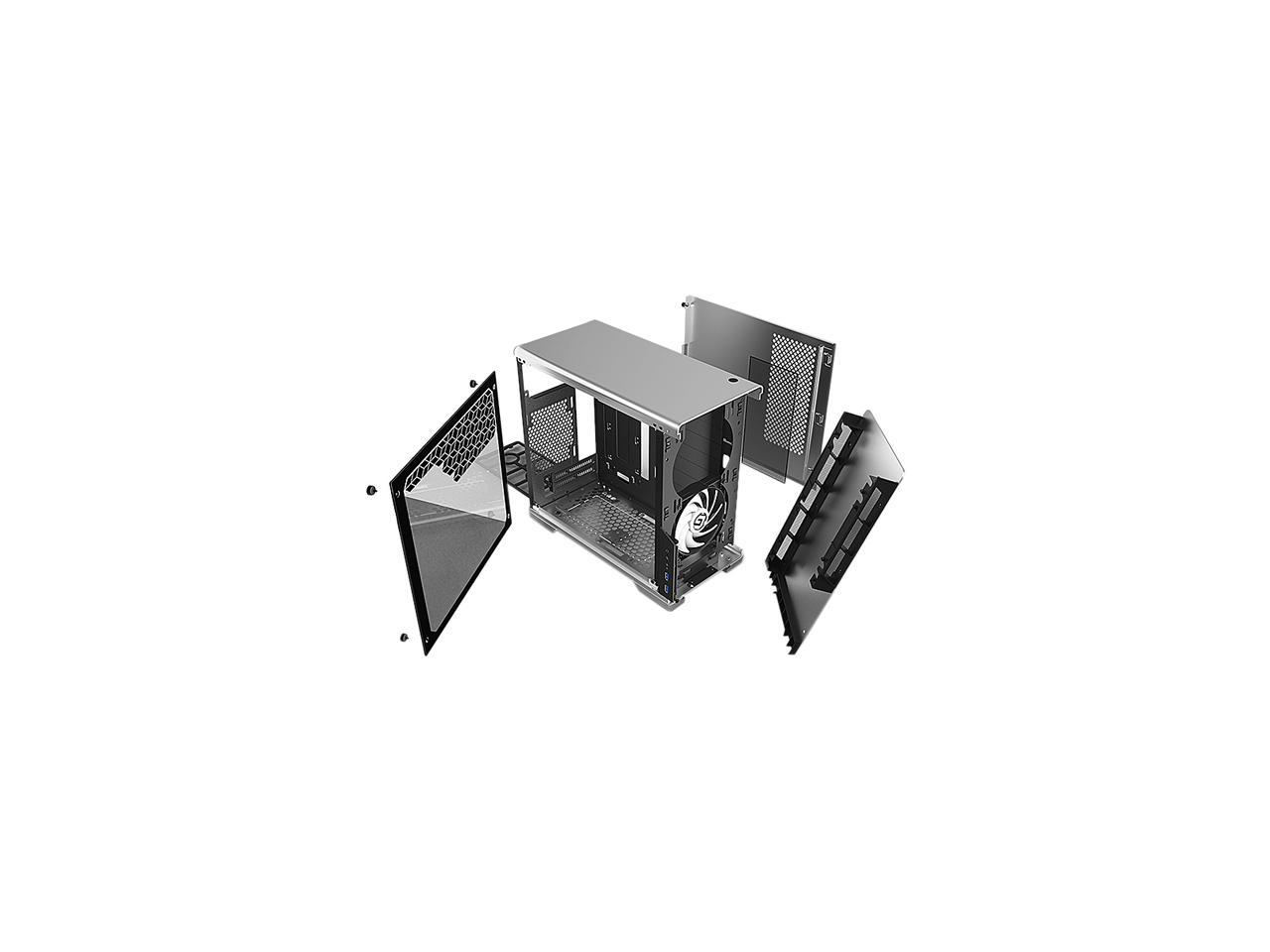 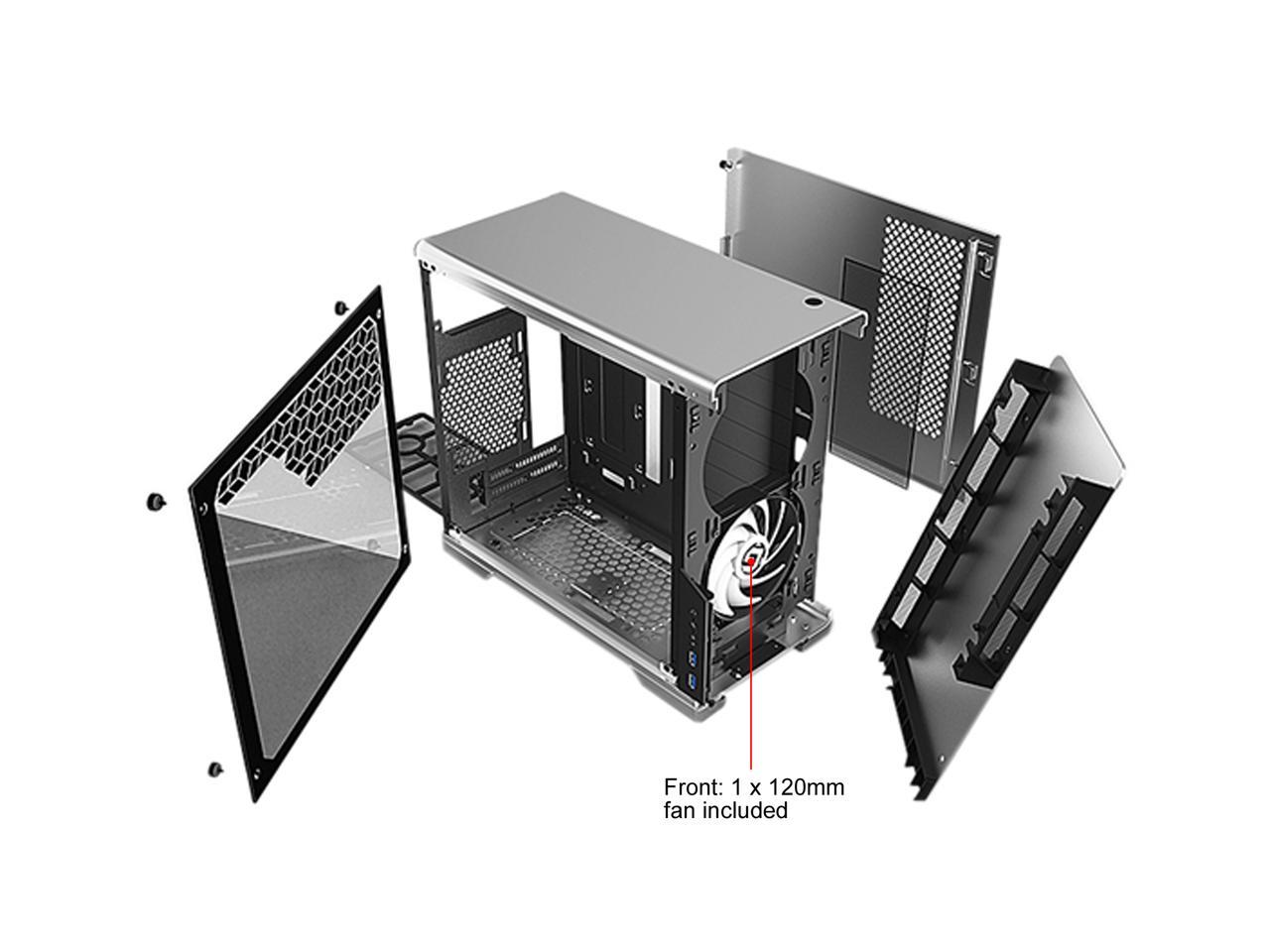 The MetallicGear NEO Mini V2 is a compact mini-tower that features aluminum panels, tempered glass, space-efficient design and clean cable-management support. The compact size of the NEO Mini still offers plenty of storage and full-size hardware support. The NEO Mini can support up to 280mm AIO for water cooling and has RGB-lighting integration. Cable management is easy with plenty of space and velcro straps. Closing the integrated cable cover keeps the interior and exterior clean and tidy.

While maintaining a compact mini-tower size, the NEO Mini offers plenty of storage and full size hardware support thanks to its space-efficient interior design. The NEO Mini has the capacity to install an array of different cooling options in the front, side and rear of the chassis. Thanks to the optimised chassis design, the front of the case sports improved airflow & dust filtration vents to maximise cooling efficiency.

Pros: - Elegant, modern and sleek design - adequate space for all parts (I wouldn’t put a 3.5” HDD though as I think it looks ugly and ruins the aesthetic; the panel or just two more fans look better imo). - Great build quality especially for the price! - Supports adequate-to-great airflow depending on your config.

Cons: As others have noted- cable management is a REAL challenge! Especially if you plan on using RGB, which usually means a splitter and a lot of finessing/improvising to get that panel to close. I always recommend mocking your layout with twist ties and then finalizing with zips. I ended up using both. Even with the very few modular cables I used for my PSU, it is absolutely tight in there. Veryyy slight bulge on the bottom that I’m really trying to not let trigger my OCD. A bigger cable management compartment would really solidify this as a true champion. You can see my cable layout in the photos. It took a lot of time and patience. There’s a lot going on back there.

Overall Review: Great ITX case if you’re good with cable management or plan on building a simpler system. Patience is key. My build has an RTX 2070, Ryzen 7 3700x and three RGB fans. Temps are normal and it looks great. It would be cool if they made another version with maybe some kind of cutout in the front of a design or a frosted window to show off the front RGB some more, but I think minimalism was the goal here. It’s a dope case. Just wish there was some more space in the cable management compartment.

Overall Review: - Does not fit 160mm CPU cooler (NH-D15). I measured 158mm max before touching the side panel glass.

Cons: Very little room for cable management behind the motherboard.

Overall Review: I would absolutely recommend this case. Just know that the cable management is barely adequate. I would like to have more accommodation for 3.5" drives. Just the fact that a full size PSU fits in a sleek case like this is very impressive.

Cons: - Not much smaller than the micro-ATX case it replaced - I'm not sure about the airflow - Having the power button on top while the other controls/ports are on the side is kind of weird - If you like RGB, this might disappoint - Instructions aren't all that great

Overall Review: I chose this case with the intent of building a relatively small mini-ITX build. I also chose it for how it looks - I really liked the clean silver aesthetic, and am quite happy with the looks now that I have it in hand. I probably should have paid more attention to the dimensions, but it's not quite as small as I hoped it would be. It has almost the same footprint as the micro-ATX case that it replaced. Considering there aren't a huge number of mini-ITX motherboard options out there, maybe having a micro-ATX case that is about this same size would provide some additional flexibility. Nonetheless, for my needs, it's fine. For reference, the current setup includes: - Asus ROG Strix B550-I Gaming mini-ITX AM4 motherboard - AMD Ryzen 5 2600X CPU with stock Wraith cooler - 16 GB of G.Skill Ripjaws DDR4-3200 CL16 memory - EVGA GeForce GTX 1080 Ti SC Black Edition video card - Seasonic Focus Plus Gold 550 Watt ATX power supply - (2) bequiet! Silent Wings 3 140mm fans (installed in the front) - Samsung 970 Evo Plus 500 GB NVME SSD Installing my components and building the PC went smoothly - there aren't any sharp edges that are concerning, and cable routing wasn't problematic. I like to hide the cables as well as I can. There are certainly enough ports to poke through from the backside to minimize visibility of most of the cables. The silver cover that can be removed to install two side fans is nice for hiding cabling, although if I wanted to install two fans there, that would certainly leave things exposed and I'm not sure how that would look. The two cables that I found were a bit disappointing as far as hiding them goes are the front audio panel cable and the video card power cable. The front audio panel cable is pretty typical, as the location of the pins on the motherboard tends to not work especially well with the video card, anyway. The video card power cable routing isn't as tidy as I'd like because the video card is at the absolute bottom of the case, so I couldn't run the cables under and up to the connector. It's just kind of hovering above the video card at the moment, right in the air flow. For reference, the video card I have installed in there right now is an EVGA 1080 Ti, which is a fairly big card, but not massive, either. I think I'm going to get some semi-custom 6-pin and 8-pin PCI-E power cables for the card, just to make it a bit tidier. This is probably not a deal breaker for most people, but when a case has a window, I figure it should have tidy wiring. Getting back to the airflow for a moment, this aspect of the case is interesting, and I'm not sure if it's good or not. Having the power supply directly above the CPU, combined with the 120mm rear fan directly behind it seems to be decent placement, although I don't know if the heat generated by the GPU and CPU will have any negative effect on the PSU. You can have a total of 4 fans on the front half of the case - 2 in the front and two on the side. I have two 140mm fans installed on the front to draw air in, with the 120mm fan on the rear and the PSU fan to draw air out of the back. Getting air out of this case seems to be the bottleneck, with the ability to have quite a few CFM coming in, but not nearly as much going out (especially if you are using a PSU like I am that has a hybrid mode and can turn off the fan under low loads). The front fans have to draw in from the sides, which seems somewhat limiting, and if the two 120mm side fans were installed, it seems like that could get kind of turbulent. I am using the stock AMD Wraith cooler, which ends up not being especially well-oriented, either. I think I might look into a CPU cooler that would draw the air from front to back, like a Noctua NH-series or bequiet! Dark Rock Pro or something like that (assuming they would fit). I'm probably overthinking it - everything seems to be running just fine so far, as far as heat management goes. I'm not overclocking the CPU (which is a 95 Watt TDP part), so I'm not necessarily introducing an issue there, but if someone wanted to overclock or was running a notoriously hot CPU I think they might want to look elsewhere. I thought the placement of the power button was a little weird, in that it's just up there by itself on the top of the case while the USB ports, mic jack, headphones jack, and manual RGB control button are all at the bottom left side. Finally, if you like RGB, this implementation is quite minimal. I think it's nicely subtle out of the box and it's set up so you could add some LED strip lights, but it seems like they went through a lot of work/expense to install what amounts to basically providing power and controls to a couple of LEDs at the front bottom of the case. I know I'm being pretty nitpicky, but overall I'm happy with the case and its contribution to the overall system. I'm looking forward to spending more time with it!

Cons: -Would have preferred a bottom PSU layout. But this does get better GPU ventilation.-A lot of space in front for extra cooling. I feel this case is made to appease a lot of people instead of one market so it does not use space as efficiently.

Overall Review: I would highly recommend this case for anyone looking to build a powerful ITX gaming PC. It has plenty of room for a large 200+W CPU air cooler. It also has space for virtually all of the top end GPUs. It took me a while to find a 2 slot ITX case that could fit my 3070 OC Ventus that takes up about 2.5 slots of space. It also has easily accessible front and side panels and decent cable management.

Pros: Fairly easy to install all my parts.The detachable SSD mounting panel behind the motherboard is nice, makes the rear M.2 slot accessible without tearing the whole thing apart.Some RGB included.The front panel I/O are on the window side of the case making them easy to access while the case is on the desk.

Cons: Have to choose between a full size HHD or an AIO radiator, and the panel that decorates that spot is one piece. If it were possibly two pieces or I could use it to cover my full size HHD it would be better.I made a partialy-modular PSU work, but I'd reccomend using a fully modular PSU with flat cables for best cable management. Round PSU cables are a bit bulky for the back cover

Overall Review: Nice mini-ITX case, looks great with RGB stuff installed, and fits nicely on my daughter's desk. The included fan went into my PC because I replaced it with 3 RBG fans, so win-win there

Cons: little to no room for cable management

Overall Review: Would recommend but be aware if you are adding anything extra cable management becomes tough very quick

Pros: This case looks great! I love the power button on top, the temper glass left side, the forward USB ports, and the many vents and easy to remove panels. Every piece is high quality and well designed.

Cons: The case is abour twice the size it needs to be. If you're looking for a very small form factor build, then I would look elsewhere.

Overall Review: I highly recommend this case to anyone who appreciates quality and good design.