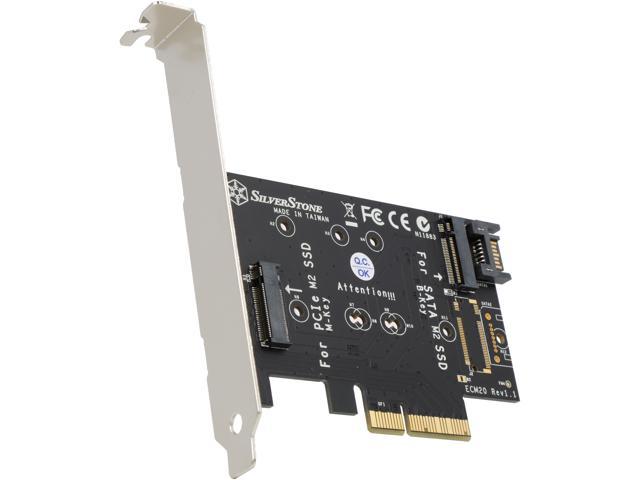 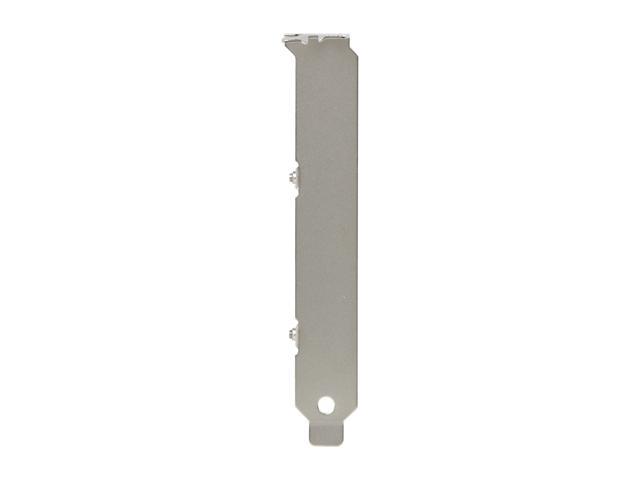 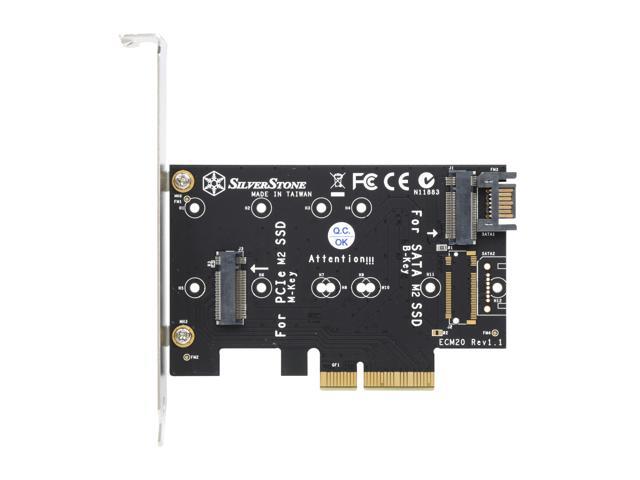 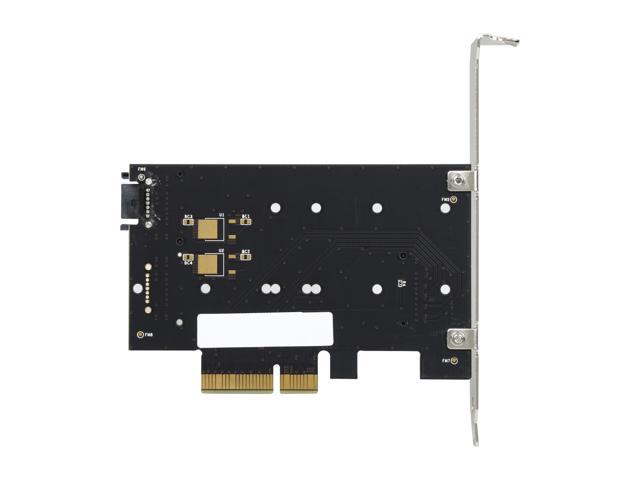 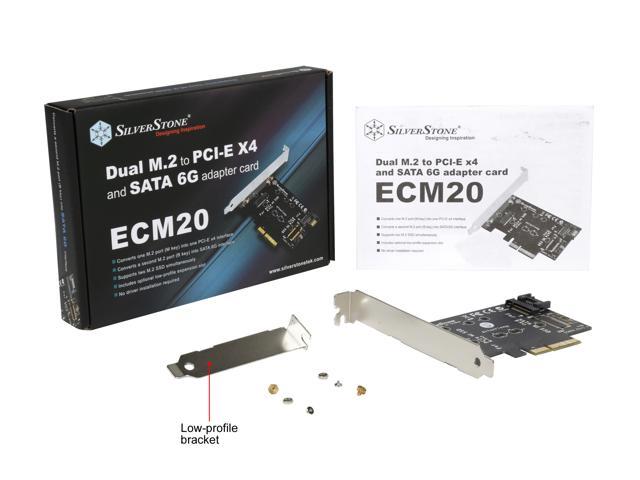 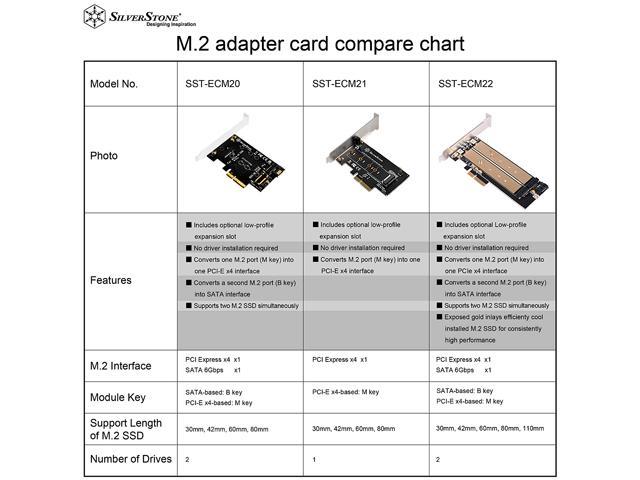 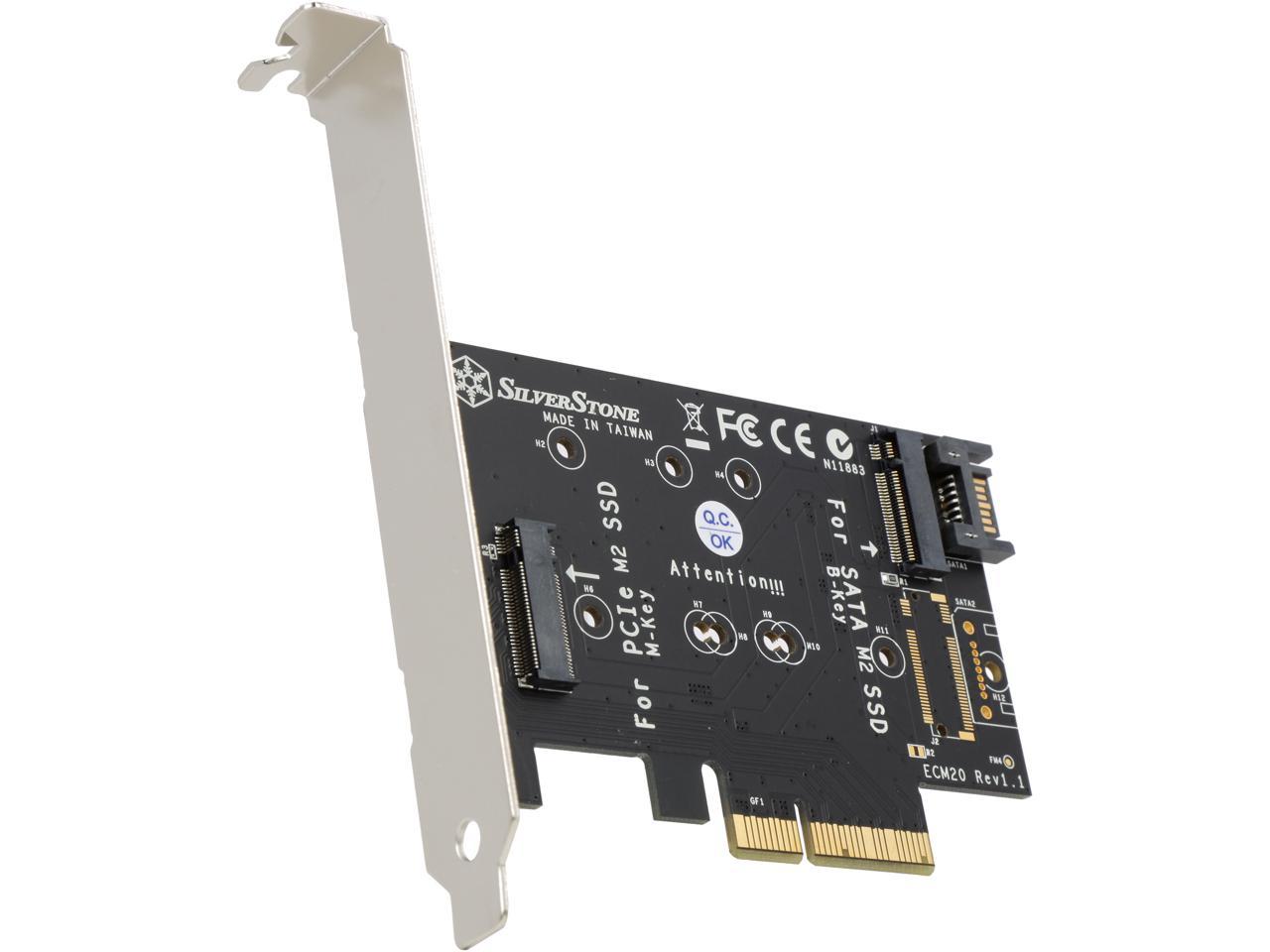 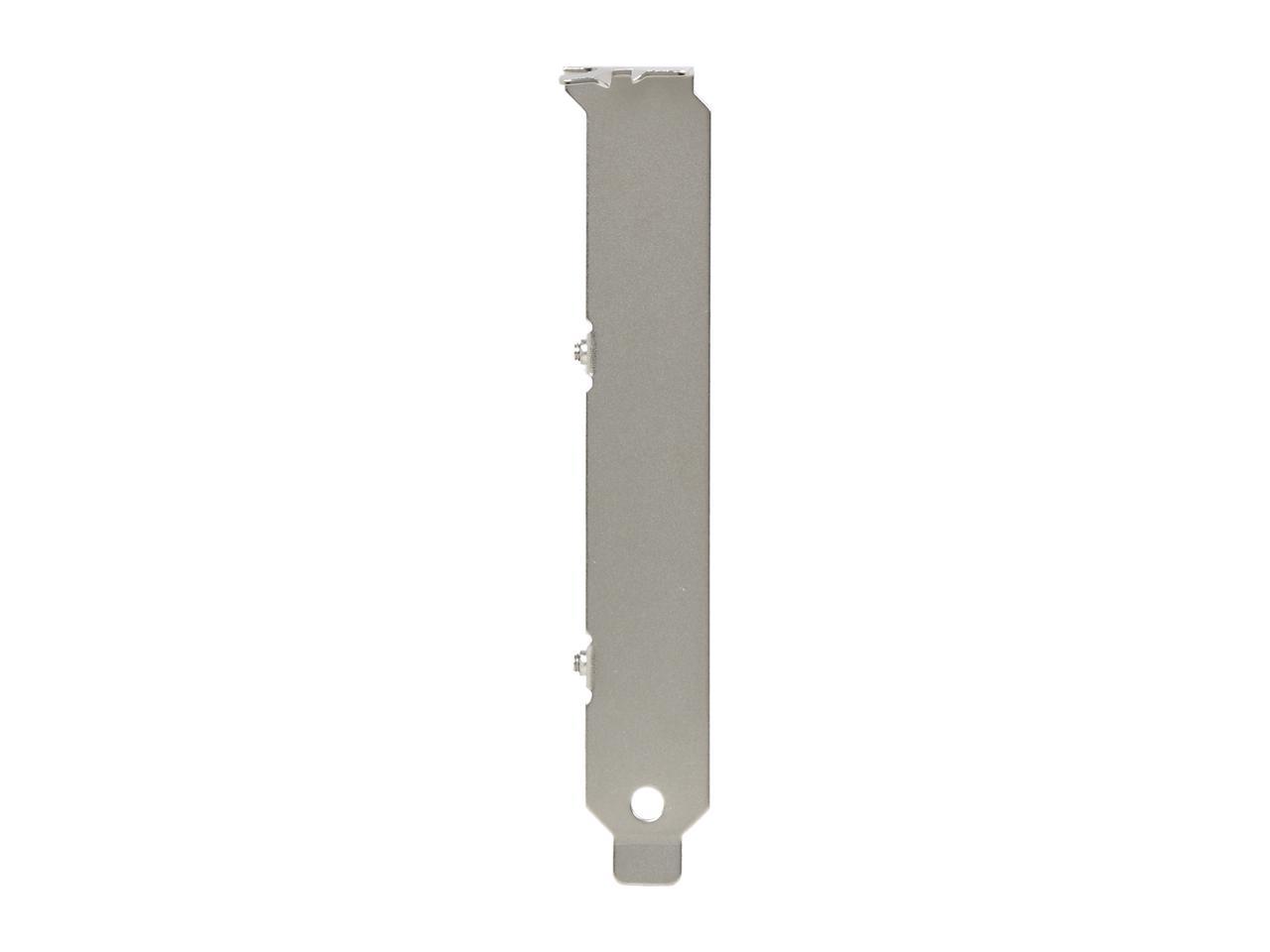 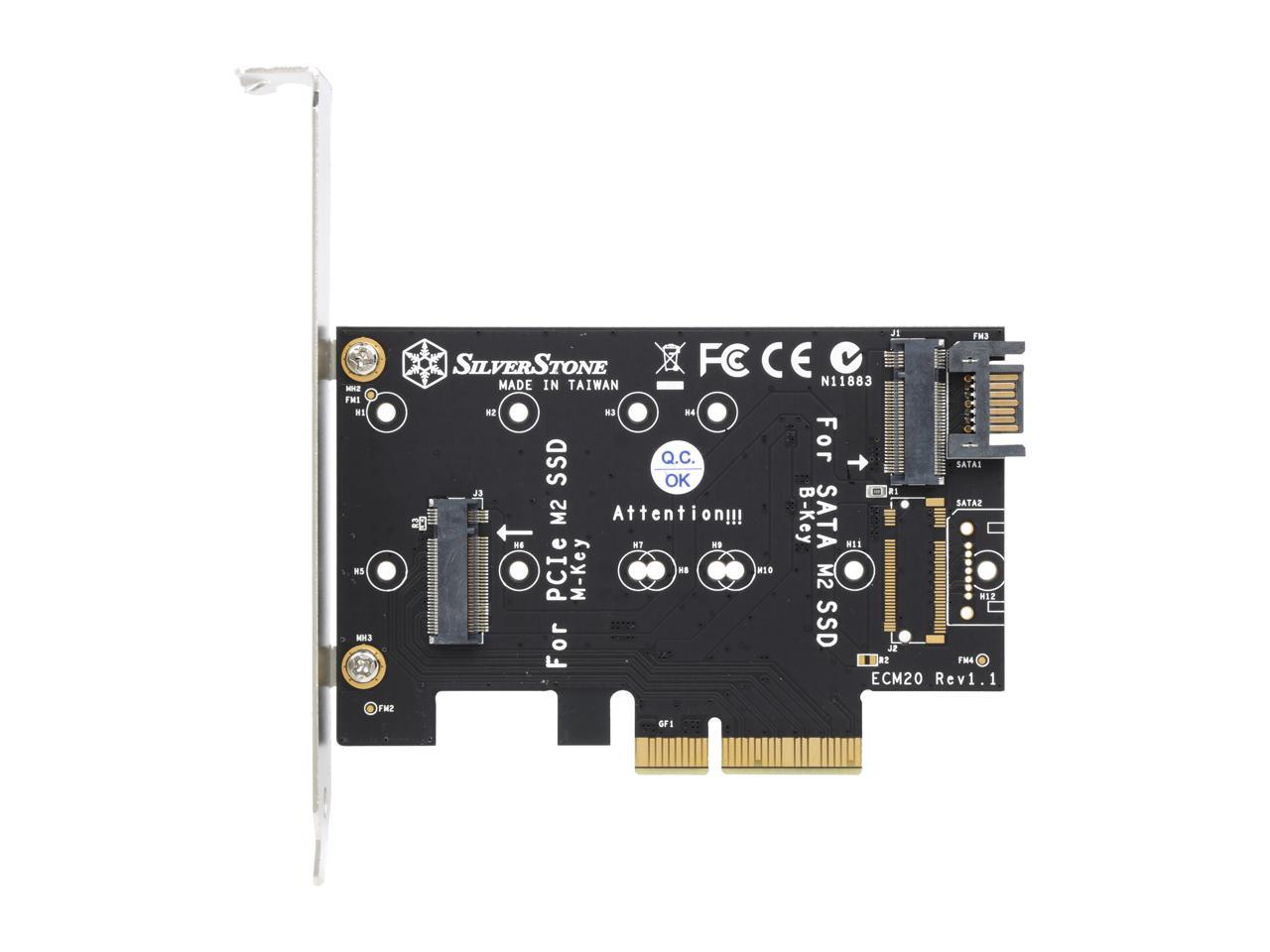 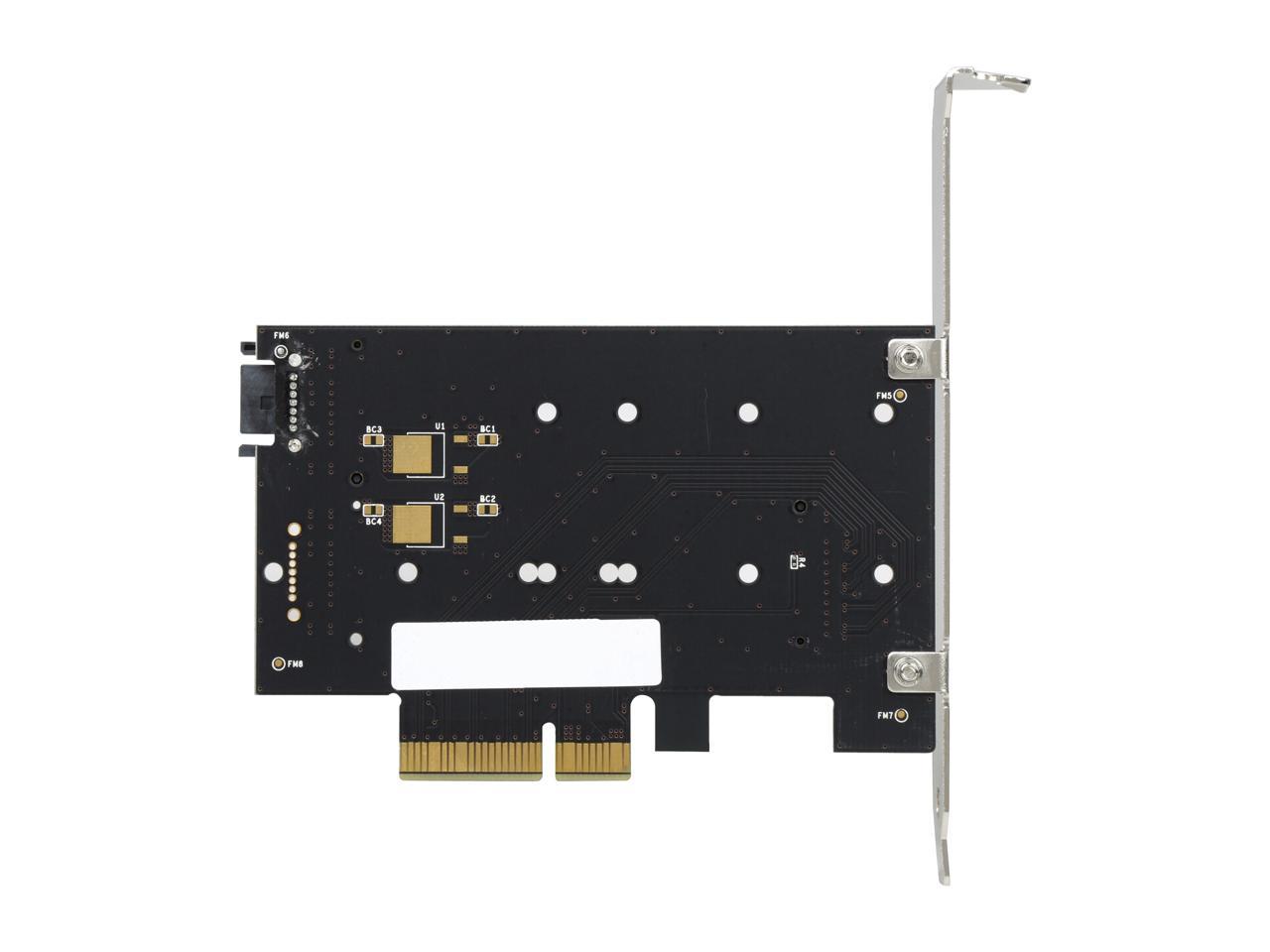 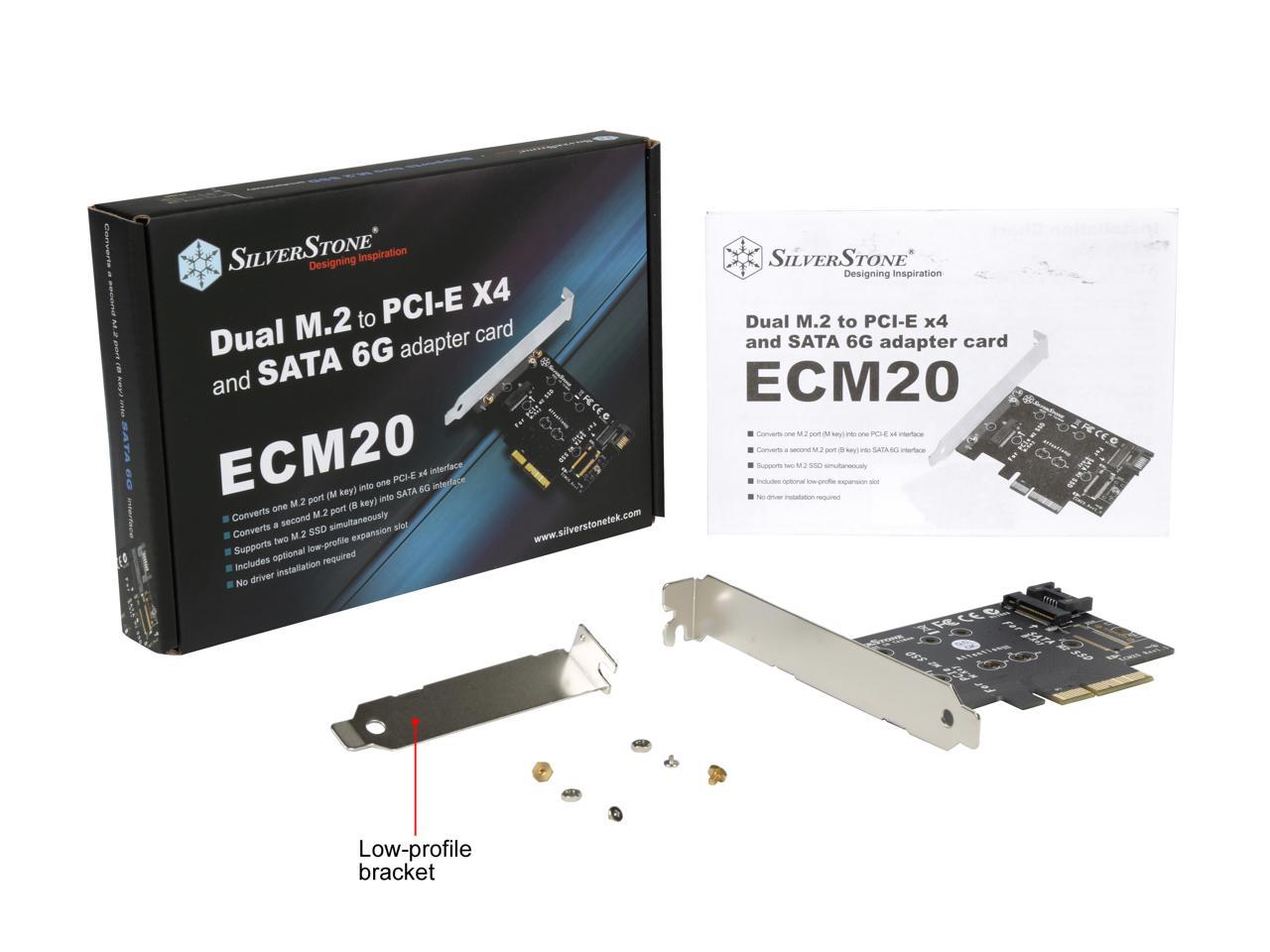 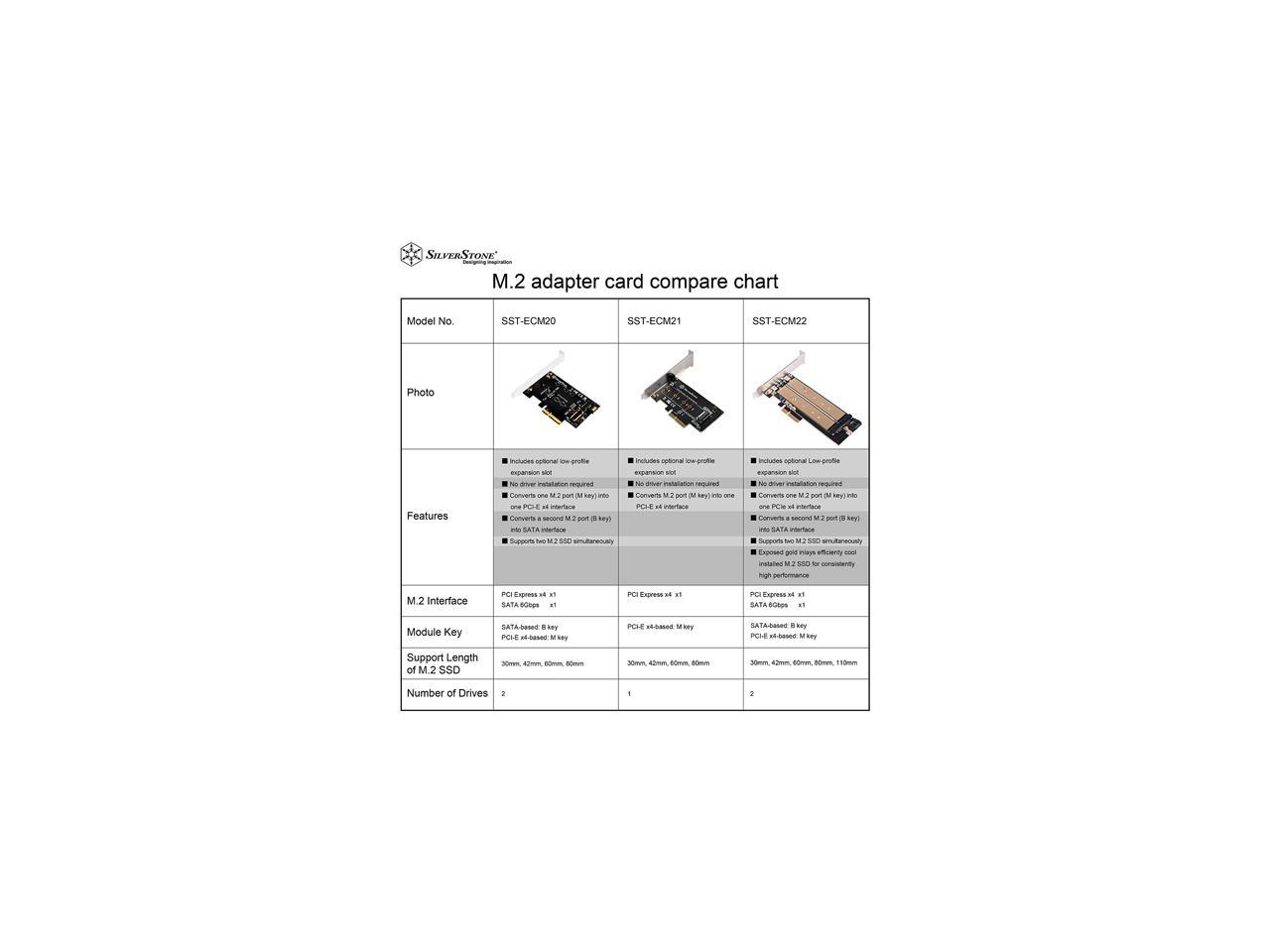 No driver is required. You only need to plug it into the PCI slot of your motherboard. Connect it to the motherboard with a SATA 7-pin cable (not included) if you need to use the B key port. Converts a second M.2 port (B key) into SATA interface Learn more about the Silverstone SST-ECM20

Pros: allows you to add one NVME M.2 SSD and another SATA M.2 SSD to you system and doesn't cost a lot. Short bracket included if you have small chassis, mounts and screws are included for two drives.

Cons: You can only use drives as mentioned in "Pros" above, meaning you cannot use two of the same type of drives together. And if you use just one it needs to go into specific socket, i.e. NVME SSD will work only in "M-key", and SATA drive will only work in "B-key" and you will have to use SATA cable. Since you must use SATA cable when using SATA type M.2 SSD, then probably cable should have been included, but again, this is fairly inexpensive unit so this can be forgiven.

Overall Review: If your motherboard does not have M.2 slot or you need additional M.2 sockets to add to your system, this is a very good and rather inexpensive addition. Just know the limitations. I used it to add SATA3 M.2 drive for extra storage to my computer using Widows 10 and it works well so far.

Cons: The con is my WD drive in now obsolete for loading new maps in games. Waiting for your friends to load gets annoying.

Overall Review: Defiantly recommend it if you need one more M.2 slot.

Pros: Easy to install and get setup as long as you read the directions thoroughly.

Cons: Everything is not always intuitive.

Overall Review: I have read some complaints about this card, however mine worked fine right out of the box with no issues.

Overall Review: If you have a lab box that doesn't have onboard SATA III I highly recommend getting this card and using it to control SSD storage for you.

Pros: -Simple and strait forward. -Even works with PCI 2.0

Cons: -None I can think of

Overall Review: I paired this with a SAMSUNg 960 Pro 1TB M.2, in order have an SSD other than the 160GB Intell M25 SSD from many years ago which was getting full and hard to manage. I'm only using this for my games, that I had scattered throughout my many drives, so I didn't need to boot from it. Even for an old rig, this card enabled me to get a "future proof" SSD that will keep me going. Great work!

Pros: Here's why the device also gets a 5 Star rating: After knowing the information stated in con and pro section of this review, the device does exactly what it is supposed to do and it does it well. Once you understand the SSD devices it facilitates, this is a great device.

Cons: Here's why the device gets a 1 Star rating: In a world where there is confusion over NGFF (Next Generation Form Factor), M.2, NVM (Non Volatile Memory) Express / NVMe, any manufacturer of a device such as this should go to the extra trouble of making things very, very clear. And Silverstone does not fully complete that task. In fact, even the grammar / spelling of the label printed on the circuit board is incorrect. The board has labels indicating / referring to M2. M2 is not the same as M.2. The proper way to refer to a slot that was previously known as a NGFF (Next Generation Form Factor) is M.2 (not M2). This is just one more indication that the people that did the documentation, labeling, box printing, etc. never had a good conversation with an engineer that knew what the card did.

Overall Review: The rating for this product is an attention getter. Within the context of what it does, it deserves a 5 Star Rating. Whoa! Hold on! I know, weird to give it a 1 star and then the first thing I do is change the rating to a 5. Both are legitimate ratings. The reason for this dual rating and the way it is presented here is as stated before: This review is an attention getter. And that begs the question attention for what? Well read on. Here's a very important item to know about this item which is never explicitly stated: The M.2 socket, closest to the PCIe edge plug / slot, labeled "For PCIe M2 SSD, M-Key" REQUIRES that an NVMe SSD be inserted into this slot. A "regular" (AKA an NGFF SSD (a bit of a misnomer) or more accurately a non or pre NVMe SSD) will not function in this slot. The slot furthest away from the PCIe edge plug / slot, labeled "For SATA M2 SSD, B-Key", will facilitate NVMe and NGFF / non-pre NVMe SSDs. So in the end, kudos to the engineers and big slap on the wrist for everyone involved in the documentation and most especially labeling of the device.

Pros: -Works great for someone(this guy) that buys an m.2 drive an misses that it's a SATAIII drive and not PCI-E because the two m.2 slots on my mobo were only PCI-E primary. Long story short this card allowed me to use my mobo's 1x4 SATA port and use the drive as secondary storage. D'oh averted. Packaging is pretty nice for the product (my first Silverstone purchase) and even comes with screws and hardware for fastening down the drive(s). The manual included is also very well done.

Cons: - minor - to use the screw to fasten an m.2 drive you first have to screw in a two piece nut/screw for the screw to go into.

Overall Review: -I would recommend absolutely. grateful this even exists.

Pros: This is a great adapter to use either an m.2 NVMe or an m.2 SATA SSD.

Cons: For some odd reason I couldn't get the card to do the advertised 4 PCI-E lanes. The card only ran at x2. Bought a completely different adapter elsewhere and it gets all 4 lanes.

Overall Review: If I could figure out why the card only does x2 and not x4 it would be an excellent adapter. I bought 2 other adapters each from different companies and they both do x4. Not really sure why this card could only do x2.