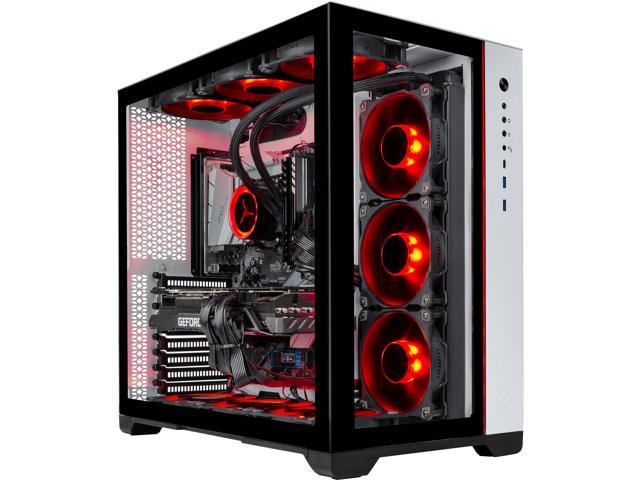 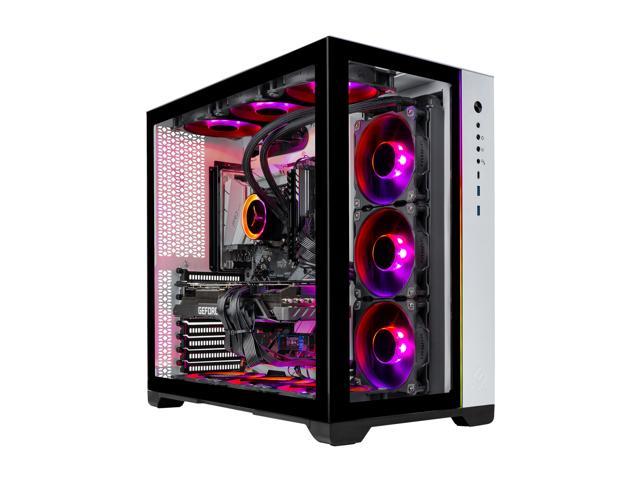 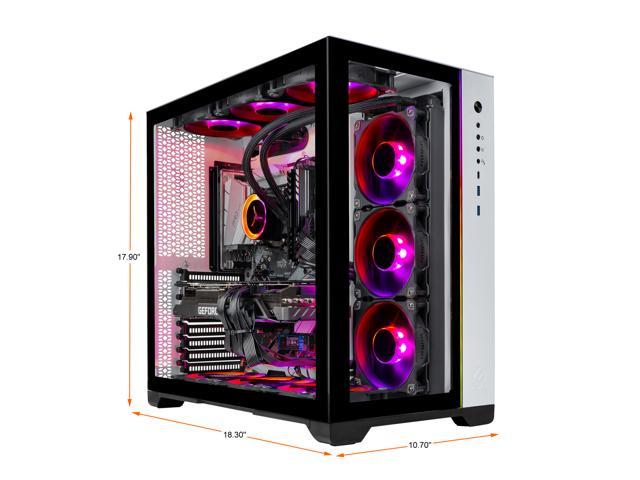 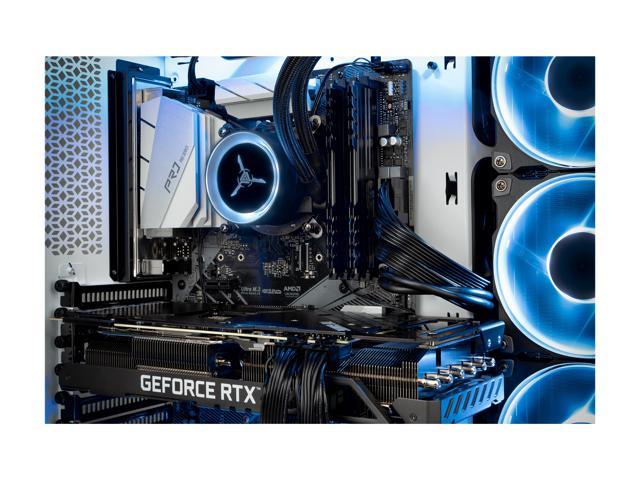 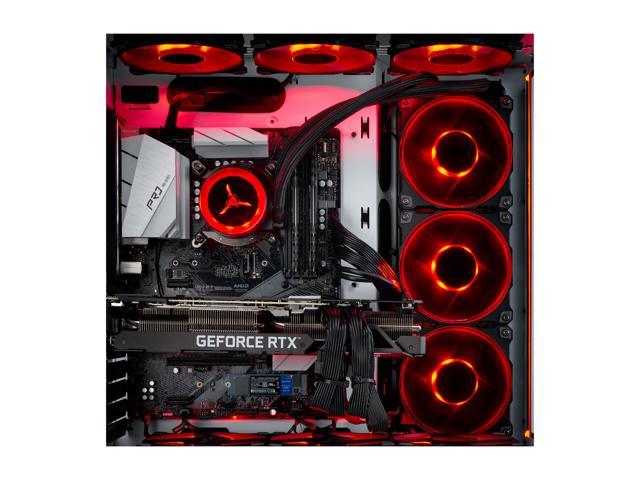 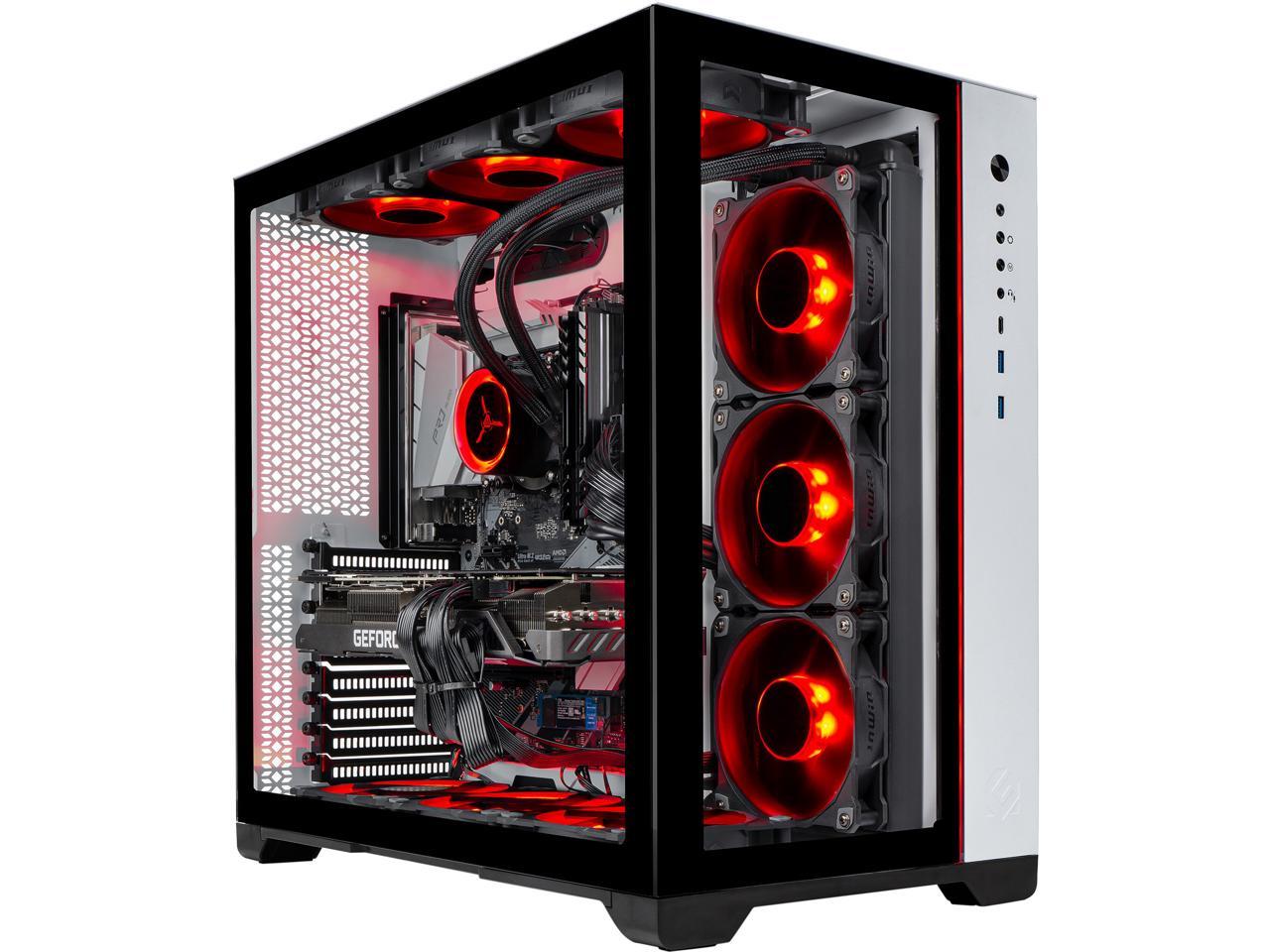 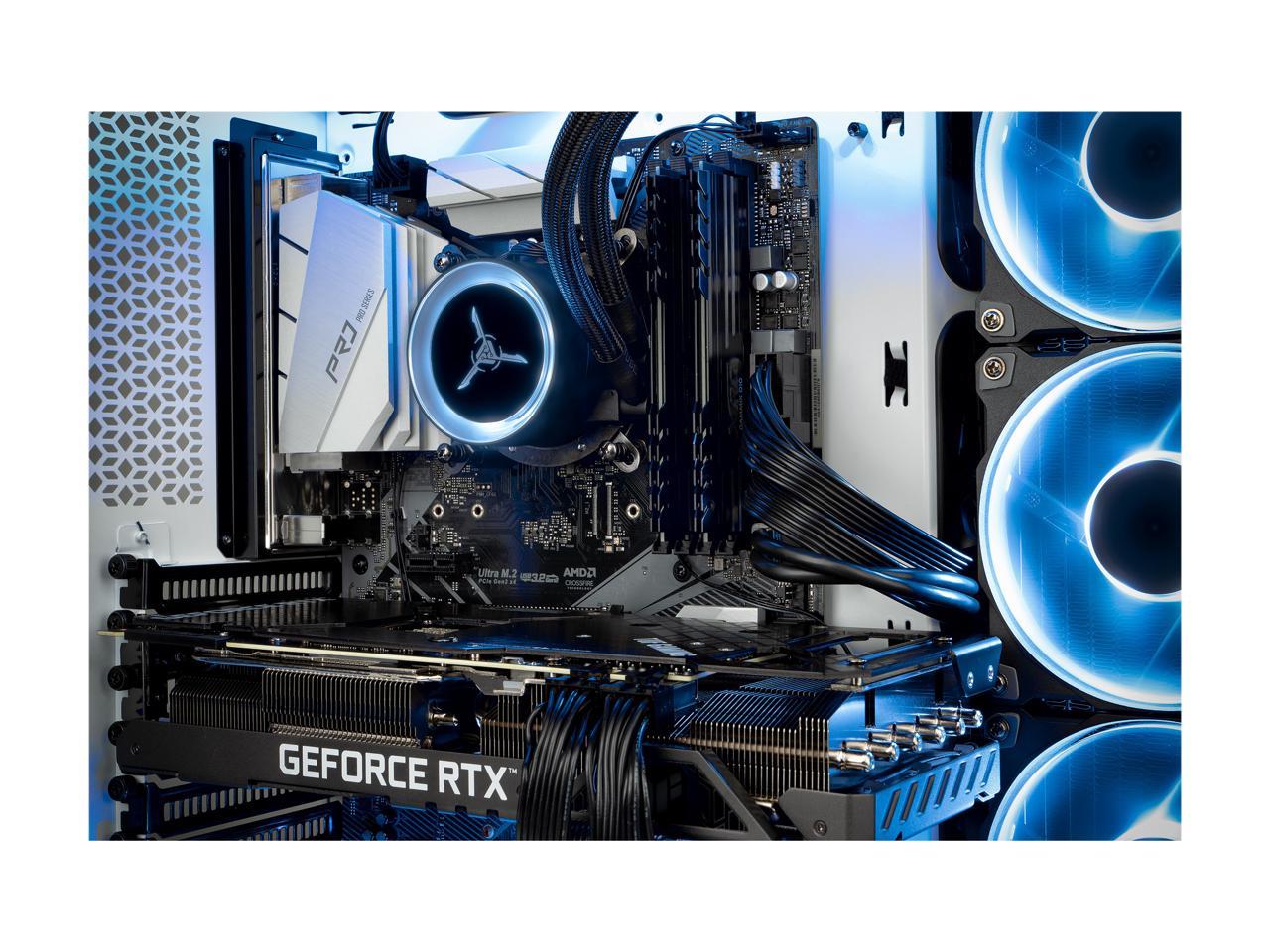 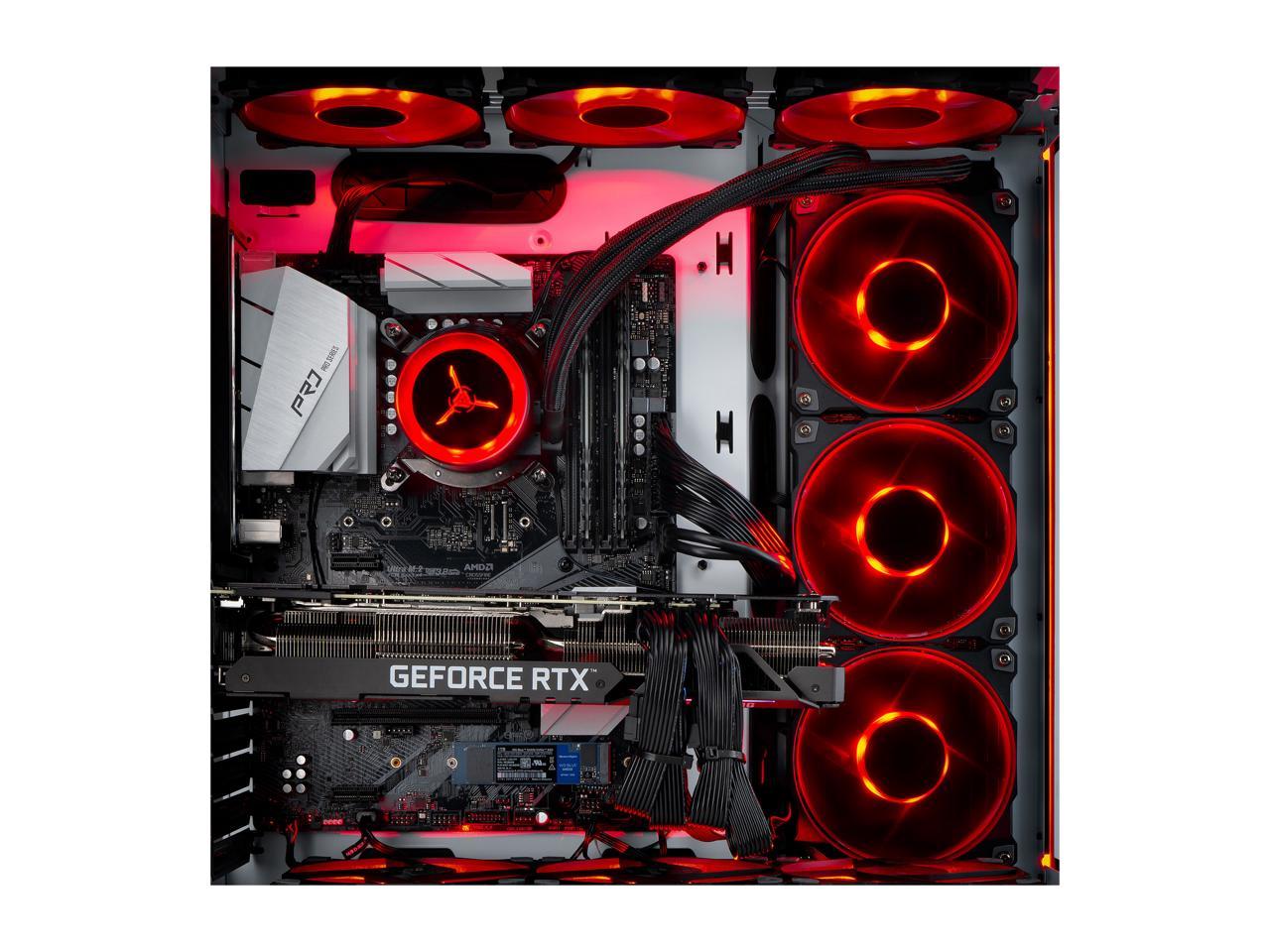 A formidable performance beast that dominates everything from surfing and socializing to 4K gaming and intensive multitasking. The Phanteks Metallic Gear Neo Qube case presents a look of jewel box, which, when paired with RGB liquid cooler and RGB fans, delivers a clear and attractive view of this premium build.

With up to 5.3 GHz Turbo speed, 10 cores and 20 threads, the Intel Core i9-10900K processor supercharges your new PC build and enables incredible experiences and productivity for gamers, content creators, and mainstream users. Shatter the performance barrier and enter the realm of immersive 4K entertainment experiences and play the latest gaming titles like never before. Or simply get work done in less time by supercharging the latest business productivity applications for a higher level of collaboration and productivity.

The GeForce RTX 3090 is a big ferocious GPU (BFGPU) with TITAN class performance. It’s powered by Ampere—NVIDIA’s 2nd gen RTX architecture—doubling down on ray tracing and AI performance with enhanced Ray Tracing (RT) Cores, Tensor Cores, and new streaming multiprocessors. Plus, it features a staggering 24 GB of G6X memory, all to deliver the ultimate gaming experience.

Learn more about the Skytech ST-PRISMII-0144-NE

Cons: - Power Supply is beyond garbage. The Apexgaming AG-850M would not supply power to SATA drives and in fact killed every SATA drive I attempted to install on the system (all verified on stable system prior to use). The system was also crashing during heavy load on several games. I have now installed my old, stable Cooler Master 850W power supply and the system not only doesn't crash, but SATA drives mount properly. - I am currently trying to get a replacement power supply from Skytech, but communication has been dreadful. The one technician I have spoken to was great, but tech support requires an appointment with minimum two days lead time, and replacement parts have not been shipped in the 4 days since my appointment. No word yet on whether I receive any compensation for the damaged hard drives. I am currently attempting to replace the control board on one and RMA the other (which was just purchased).

Overall Review: - Would not recommend due to dubious parts and poor customer service experience. - If you have this system with ApexGaming PSU, beware and seek replacement immediately. I have never heard of this brand, likely for a reason. My 15 year old Cooler Master is stable as can be.

Pros: Everything works that came.

Cons: Missing mouse that it was supposed to come with but more importantly missing wifi antenna.

Overall Review: As expected yet missing parts isn't good for such a price tag.

Overall Review: I really tried to love this prebuilt, i was exited to turn it on and be blown away, as soon as i turned it on, first red flag appeared, several fans rgb wasnt turning on, including the aio rgb, i tried to ignore it, to see if the rgb mode button on the case helped, nothing, tried the controller for the rgb box, nothing, booted up the pc, it was fine, tired asus software to control rgb, nothing, i then went and opened the case to see that the rgb boxes were faulty and one of them had the top shell backwards, i really expected that for the amount of money i payed i would have gotten a solid working system with the best quality parts, but this is not the case, i also wasnt a big fan of the 3090 that came it came with, visually and performance wise, i got the pny uprising one, and it kinda looks cheap, and performs subpar compared to most 3090s, overall, Im disappointed that it did not meet my expectations, considering the amour of money spent.

Cons: Quality Control (RGB light for one of cooler fans was not working) *fixed myself by plugging into different fan port on switch Pricey (current state of market) Ram only 16gb and no RGB *switched it out with ram I had Corsair vengeance 4x16gb 3600 sticks with RGB No storage but always could add if I want to

Pros: Worked beautifully as is, out of the box. Packed well so that nothing moved in shipping, and it's as fast as a scalded mountain gorilla. Good, high quality parts.

Cons: There is a massive flaw that makes this the worst PC I've ever had. There's a blinking yellow LED on the power supply that I CAN NOT turn off. It's pulsing slowly no matter what - when the PC is sleeping, even when it's flippin' powered down. The only way to turn it off is to unplug the computer from a power source. I can't just slap some electrician's tape over it, because it's buried in the case and there's no external access...but it glows through all the ventilation holes and lexan windows. This is a massive pain in the rear, and it's really bright - so I absolutely have to do it, or it will keep me up all night. I hate it. I loathe it. It's making me crazy.

Overall Review: I wouldn't buy this machine again, and I wish I could return it, all because of the unkillable blinking LED on the power supply. It's not a failure or breakage - it's working as intended. It's just that, the way it works SUCKS. The workaround is a huge pain.

Overall Review: Great case, actually like it a lot more than I thought I would, really roomy and plenty of space, plus just looks pretty nice, and I'm not even a big LED fans, just bought this thing for the 3090 honestly.

Cons: - Poor cable management, ESPECIALLY behind the right side panel.- On the AIO, cables were tangled through the pump mount and VRM heatsink.- Front USB C was not even connected to motherboard.- RTX 3090 missing clear support bracket which comes standard with GPU.- Motherboard M.2 heatsink missing - removed to install SSD then never reinstalled.- HP RAM faulty - failed MemTest86 and MemTest Pro.- No paperwork for any component provided.- No additional hardware from motherboard - mounting posts and screws for M.2.

Overall Review: Great looking machine, awesome case, plenty of fans. Should have been able to crush any simulation/game attempted. It was able to easily run triple 1440p monitors at nearly 160fps on nearly maxed settings in iRacing --- but the problem was due to the faulty PSU, it was causing the machine to crash constantly in various points during the simulation.Given the availability and pricing of PC components these days, it was a convenient way to get a decent setup.NewEgg was great to work with on the Return/Refund.Build Details on this Specific Machine:Phanteks MetallicGear Neo Qube White with (9) 120mm RGB fansASRock z490 PG VelocitaIntel i9 10900kCoolerMaster ML360 Mirror AIOPNY GeForce RTX 3090 24GB XLR8 Gaming REVEL EPIC-X RGB Triple Fan EditionHP V6 16GB (2 x 8GB) DDR4 3000MHz1TB WD Blue SN550 NVMe SSDApex Gaming AG-850M 80+ Gold 850wIf you get this PSU, be on the look out for failures as my experience is not isolated... I wanted to love this build, but without functioning correctly, I simply could not. Good luck if you purchase this machine.

14 out of 16 people found this review helpful. Did you?