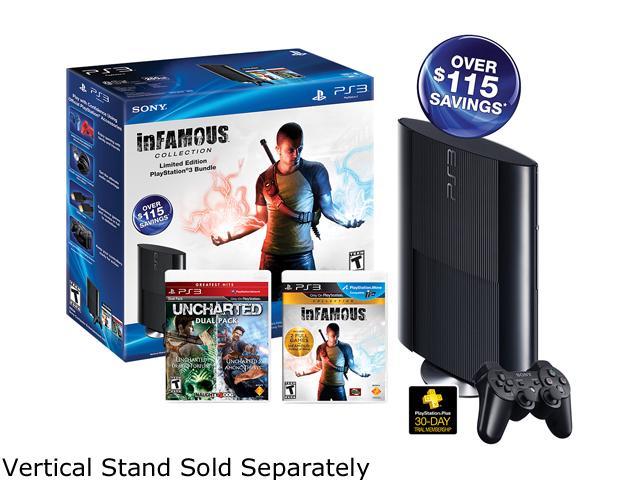 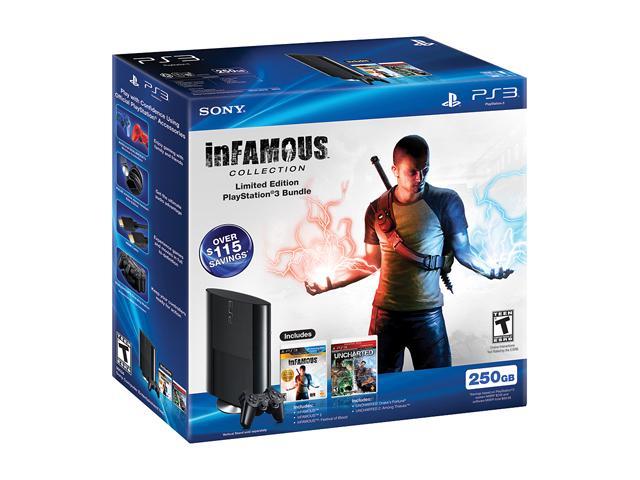 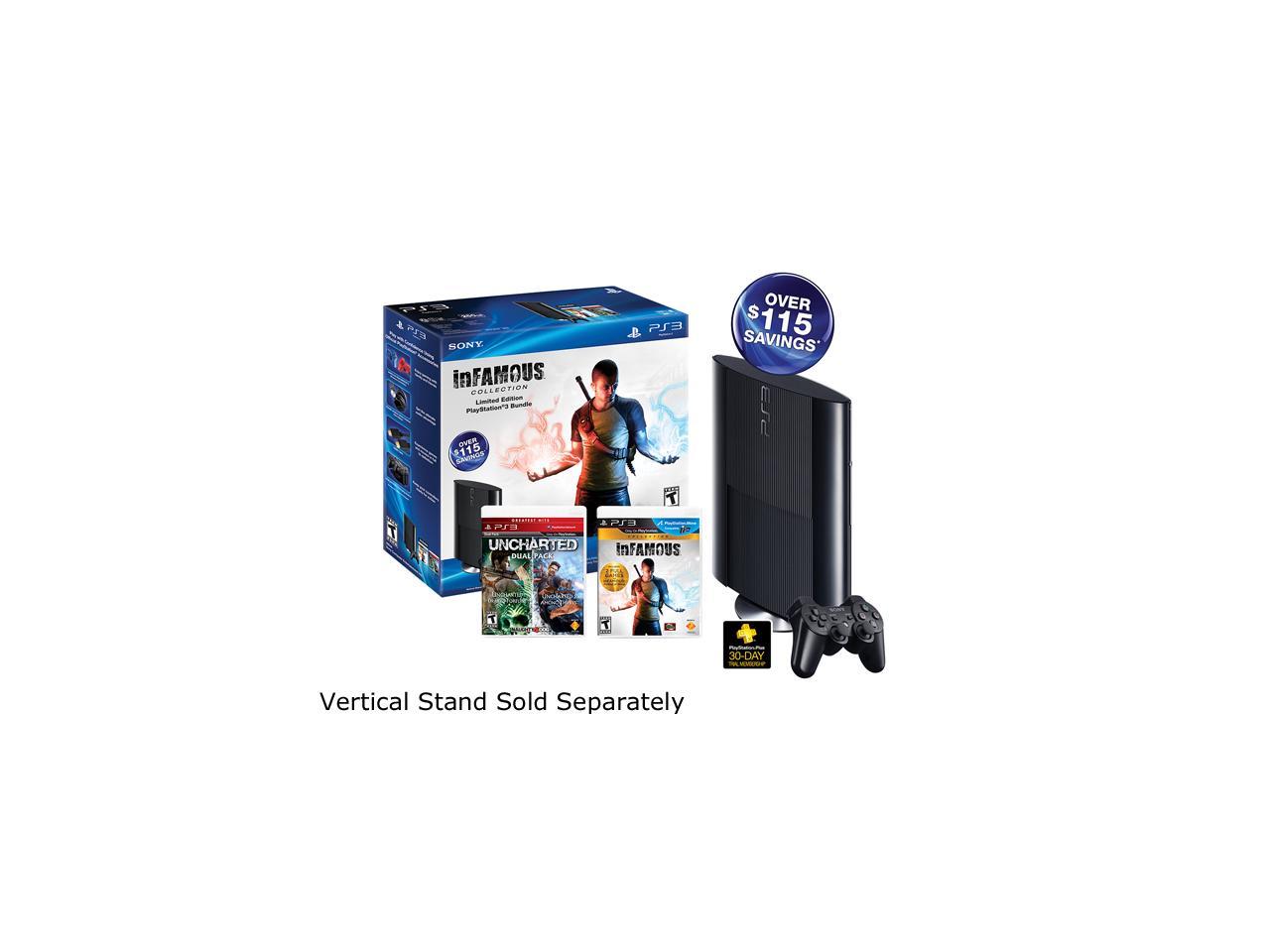 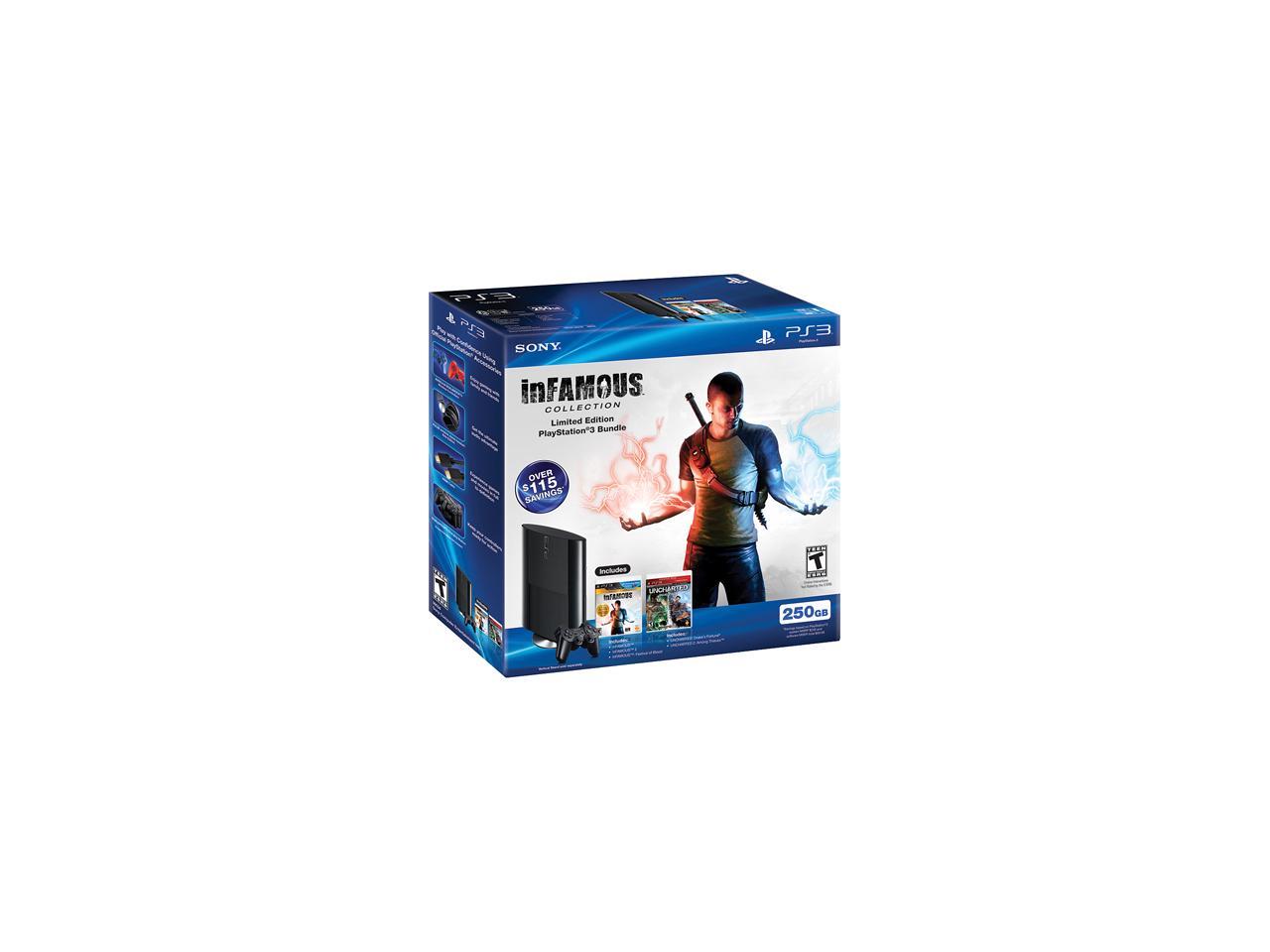 (19) Write a Review
OUT OF STOCK.
LOADING...
Specs
Reviews

Pros: It's really a great bargain for the price! Got it before it went out of stock on Thanksgiving. Four games and a console for $200? Great buy!

Pros: I purchased this bundle as soon as I saw it become live on Newegg. I just bought a new TV (no-name brand 42" LED, fairly good picture for just under $200) so obviously, I need a bluray/dvd player. I figured I would knock out two birds with one stone and get this PS3 bundle. I have been wanting a PS3 for a while, and if you have been looking for one, then I sure hope you saw this while it was in stock. Four games (or five - not sure if that other Infamous game is a full game or just an addon) along with the 250GB Super slim PS3. I did not like the look of the first slim, this one looks much better.

Cons: As with most great deals, it wasn't free.

Overall Review: Bottom line: If you want to play games, yet have a great multimedia device, the Playstation 3 is the right choice to make. However, if you aren't as interested in the games, you can probably hook one of the older PS3s for less than $100. Especially if you're like me and have tons of PS2 games that you can't play because of broken consoles ;)

Pros: Best Blu-ray player & gaming system. Comes with 5 great games (Festival of Blood is a stand alone Infamous title for those that don't know). Bought it for my parents since they dont have a Blu-ray player yet, but also have an older 720p projection TV that does not have HDMI in. Component cables & Optical Audio are the next best option, but most current Blu-ray players do not have Component out (only HDMI & Composite). PS2 & PS3 have the same proprietary connector which you can connect Component cables to. Also, my parents probably won't use it for gaming, but the option is there and will give me something to do if I am bored at their house. So I'll just sell the games since I already 100% ed them and use the 30 day PS+ trial to add to my subscription

Cons: it could come with component & hdmi in box

Pros: Can't complain. It was a really good deal considering the four games.

Cons: The games do not come in any plastic case, only in a cardboard sleeves. The build of the PS3 is not as aesthetic as other PS3 models, but it still works.

Overall Review: Great for the price.

Pros: Nice looking, stays relatively quiet, possible to get game out if PS3 bricks, comes with some great free games

Cons: Makes some funny noises sometimes, mostly when laying down.

Overall Review: It's a PS3 which means its pretty sweet

Pros: First and foremost, FREE ONLINE PLAY! Great to be back on playstation since my ps2 died long long ago. Much much better exclusive games. Like the patches and updates for games automatically. Nice size 250gb hdd. Wifi blutooth bluray. Infamous is great almost beat the first, nice high action packed game. Uncharted is like the tomb raider that never was. Nice story, graphics are amazing, little repetitive gameplay throughout but great none the less.

Cons: The charger cable length is pathetic at best. Only 3ft! I'm in front of a 50" screen that sucks when you run out of power and have to charge. Also why I got a second controller.

Overall Review: GET YOUR PS3 NOW ITS WORTH EVERY PENNY!