Top Rated
2,908 Ratings (90% Positive)
This badge confirms that this seller has high ratings based on customer satisfaction and on-time delivery. See More
Sold and shipped by: 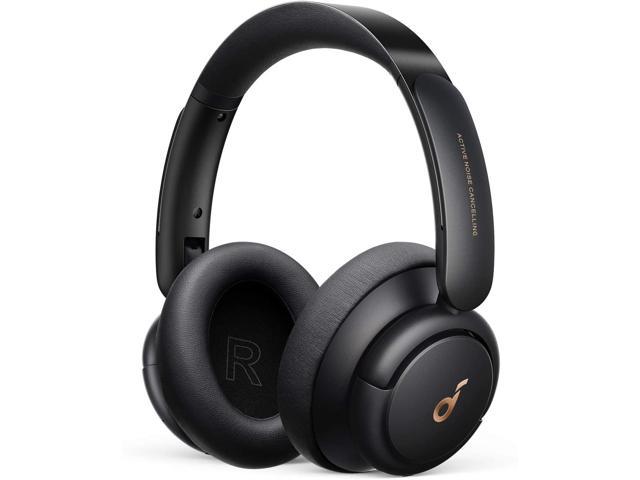 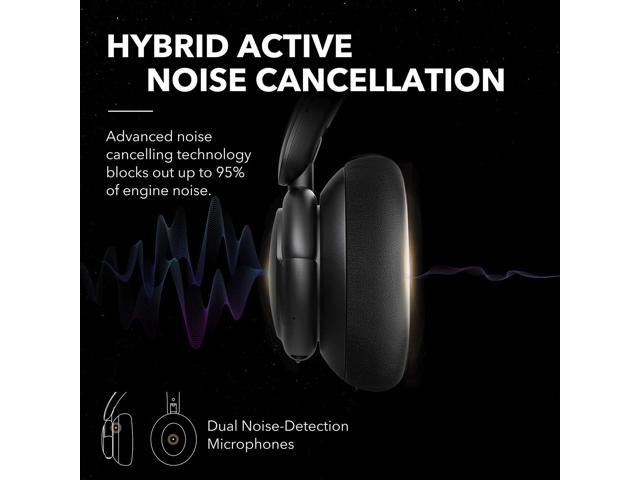 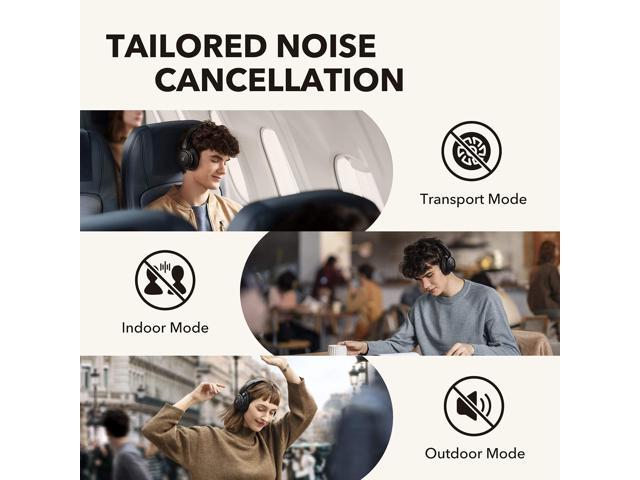 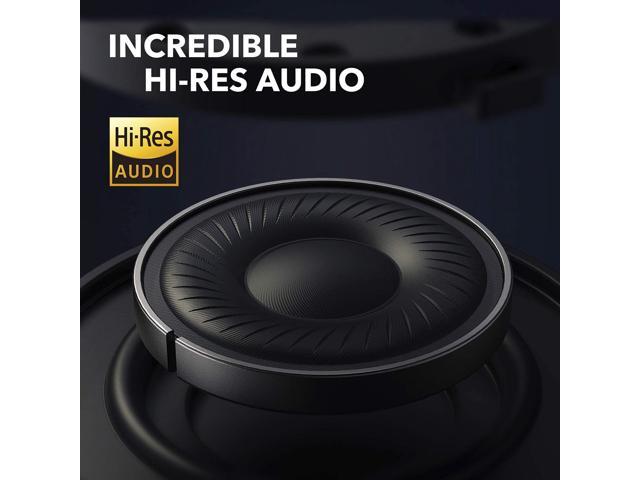 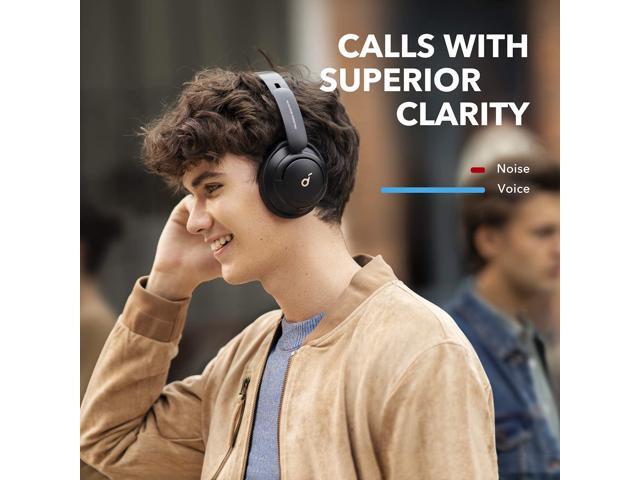 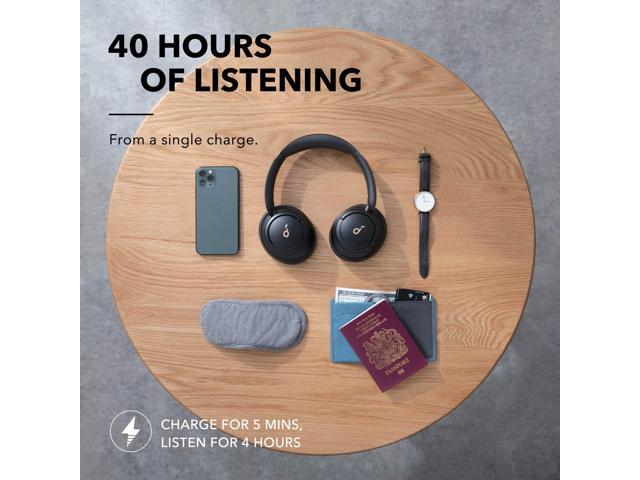 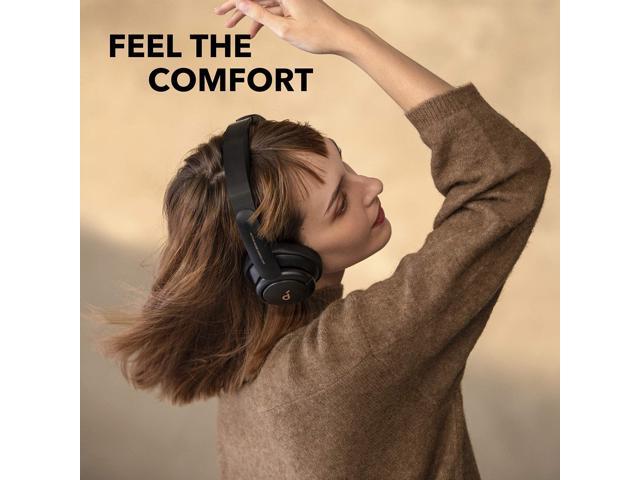 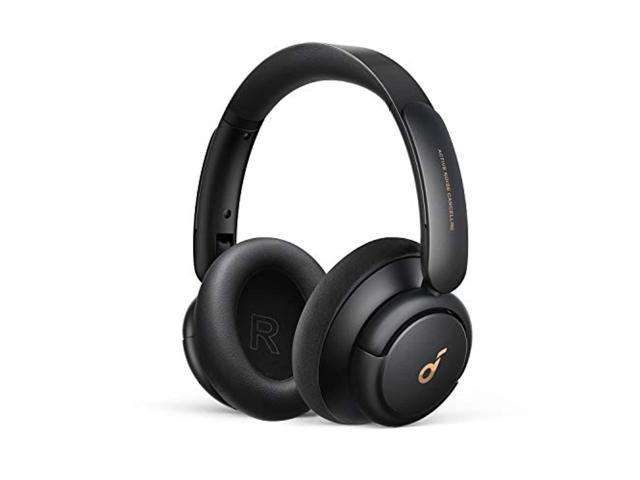 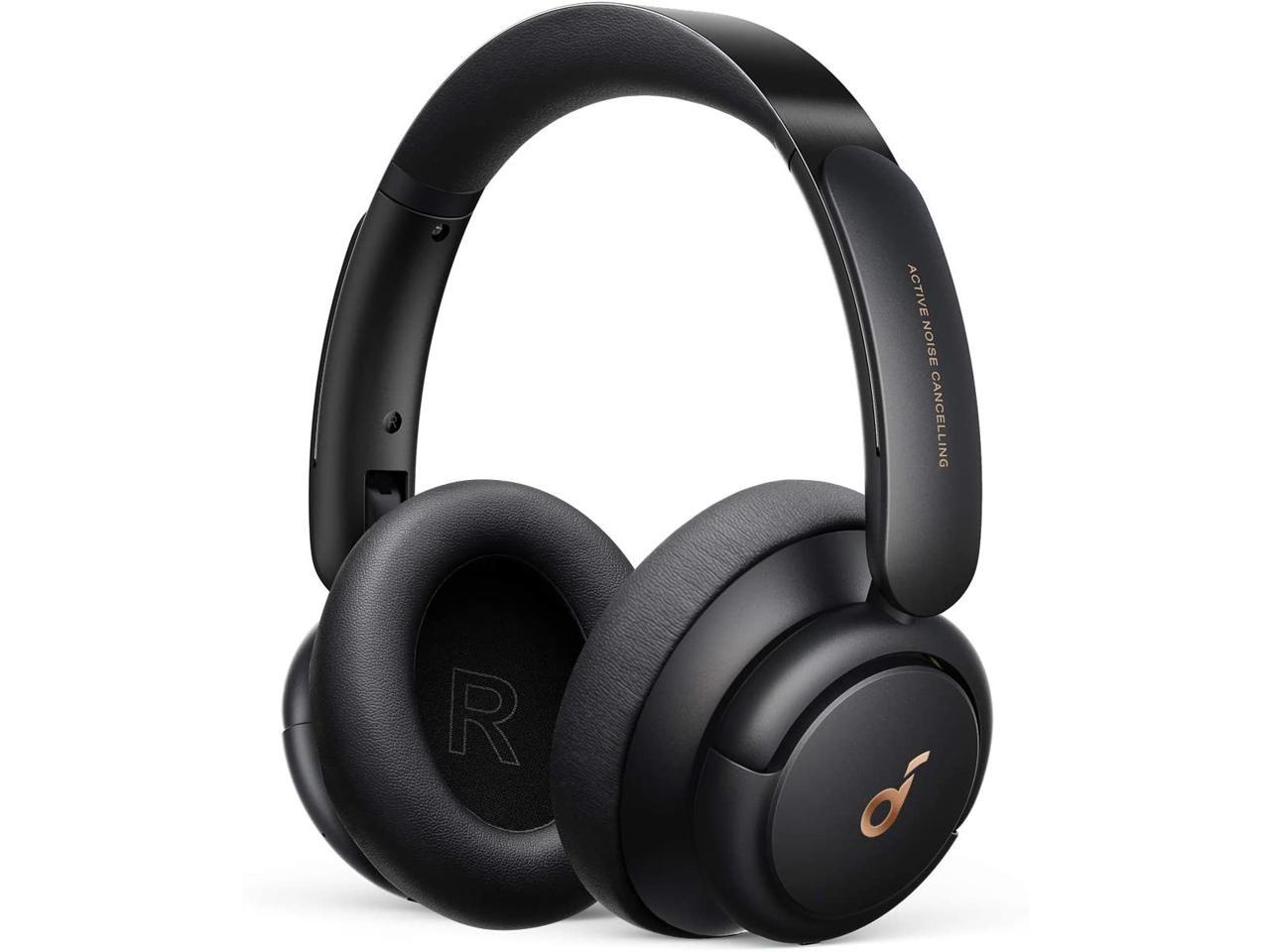 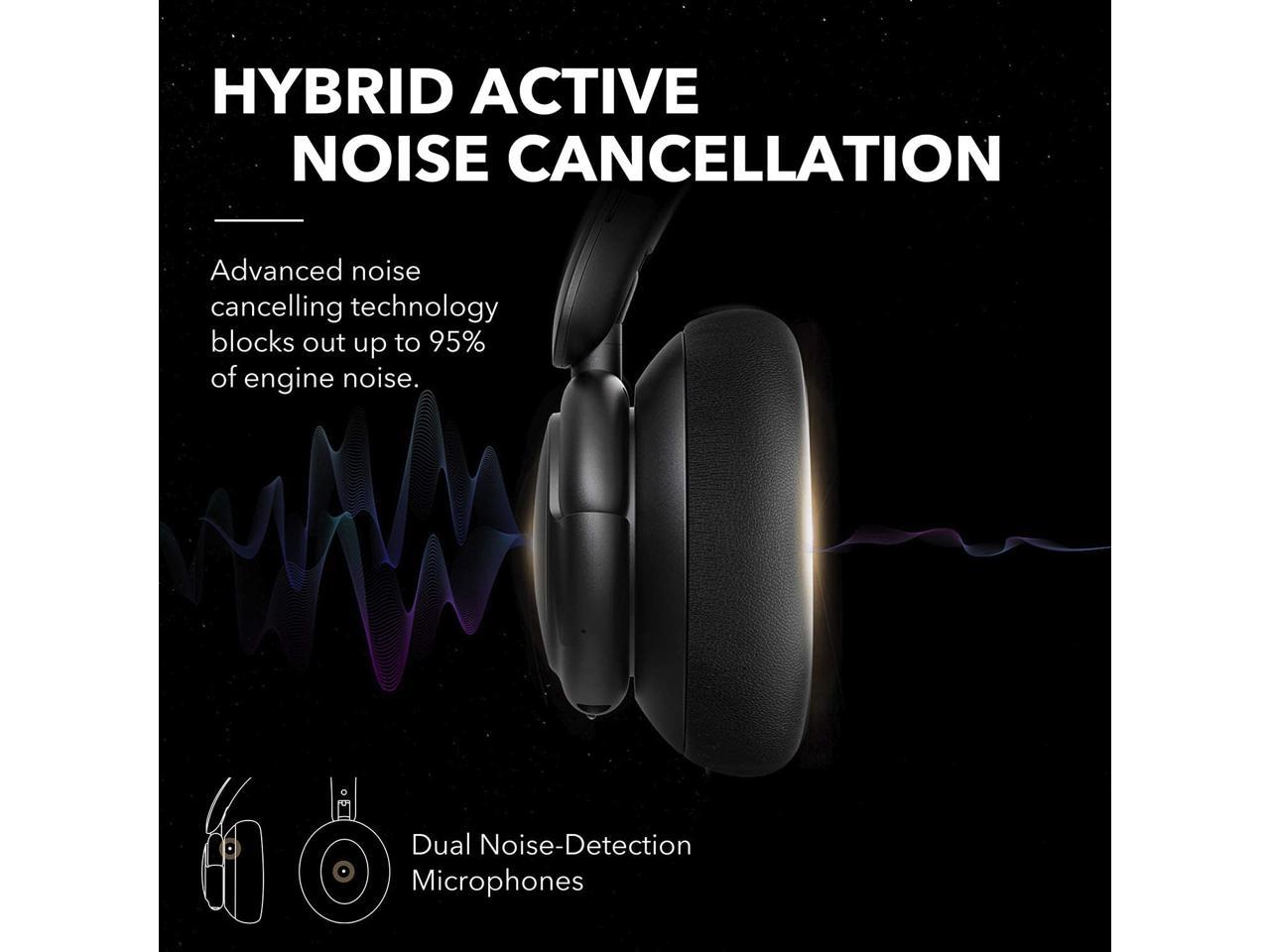 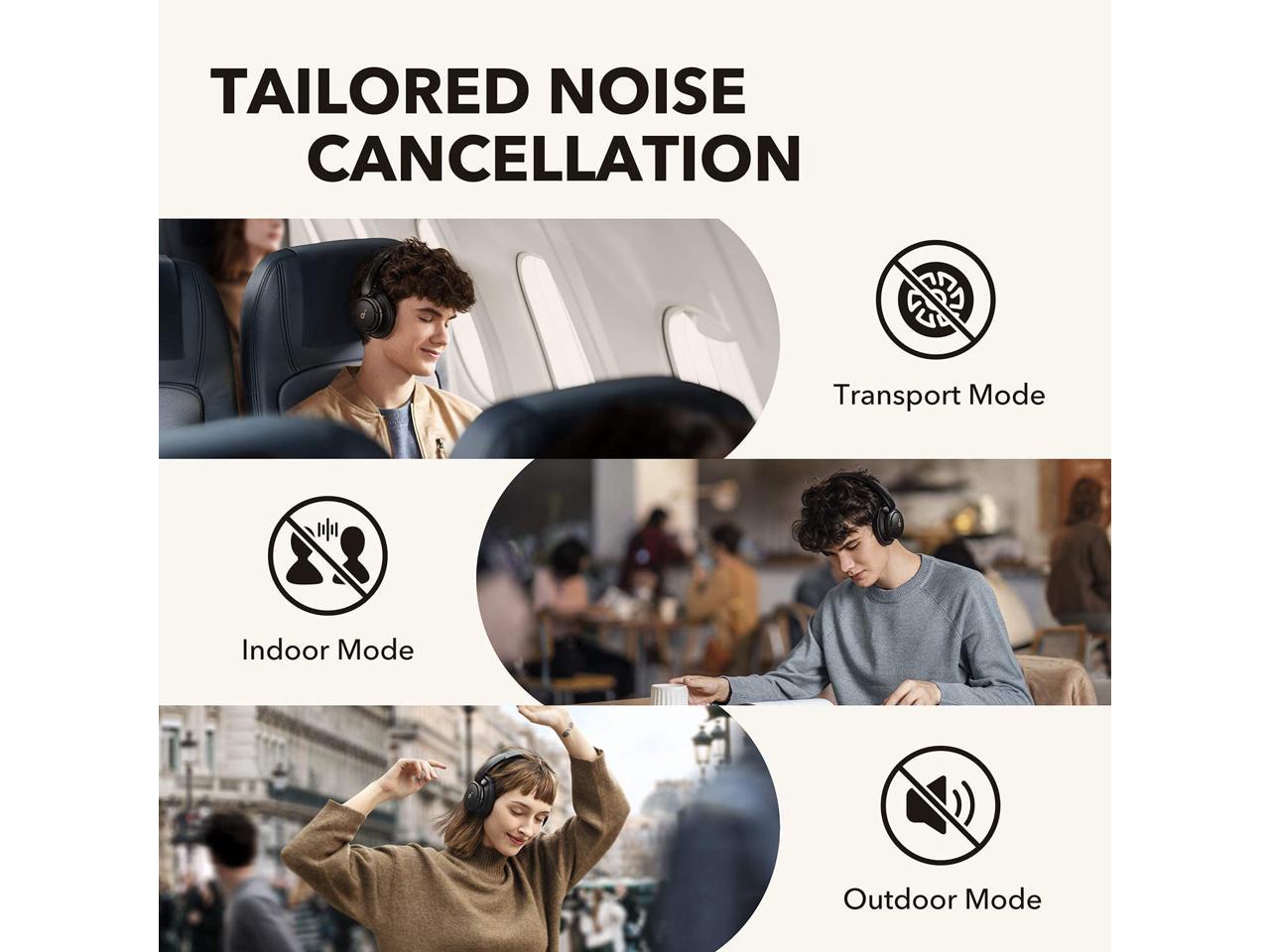 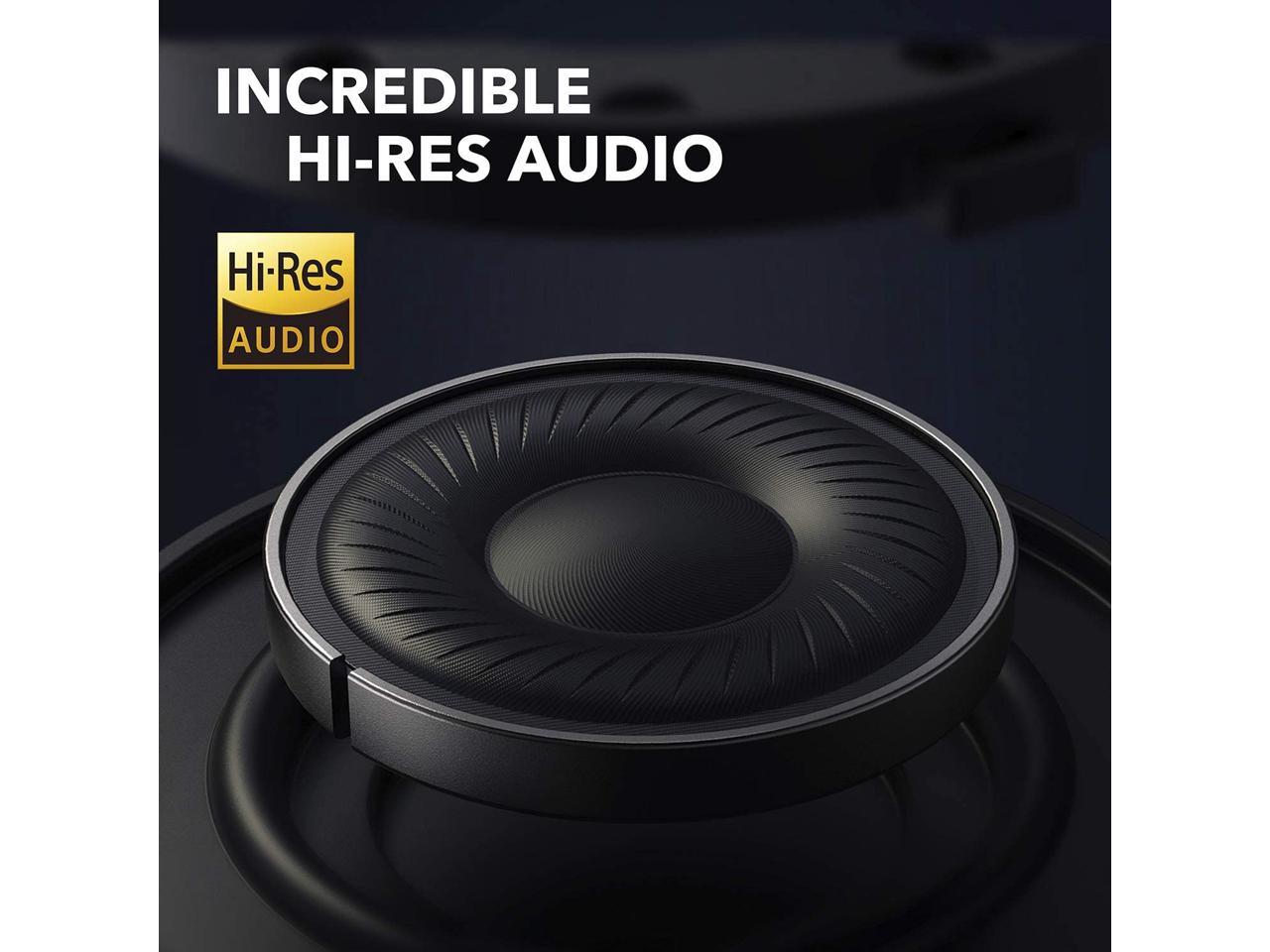 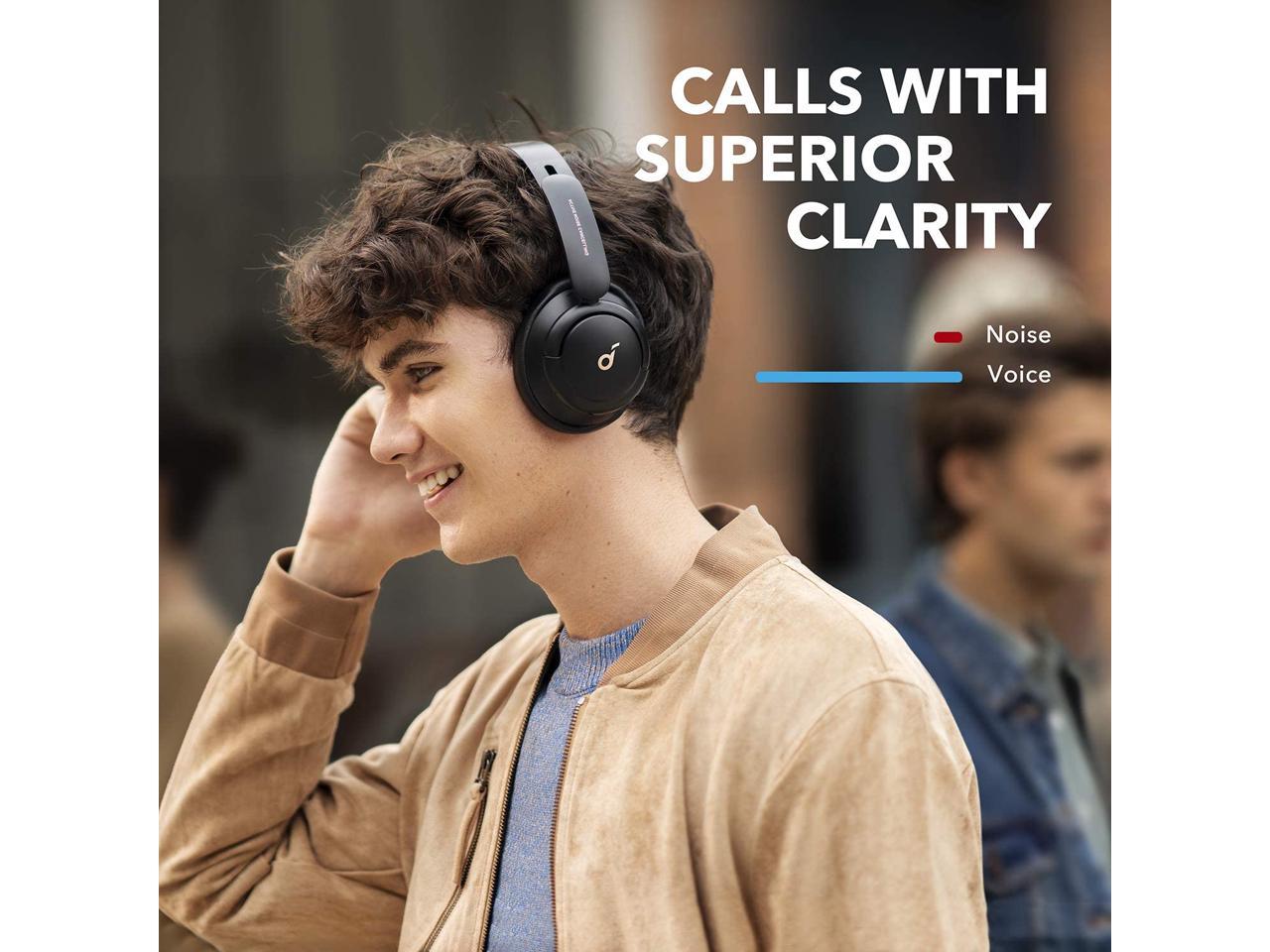 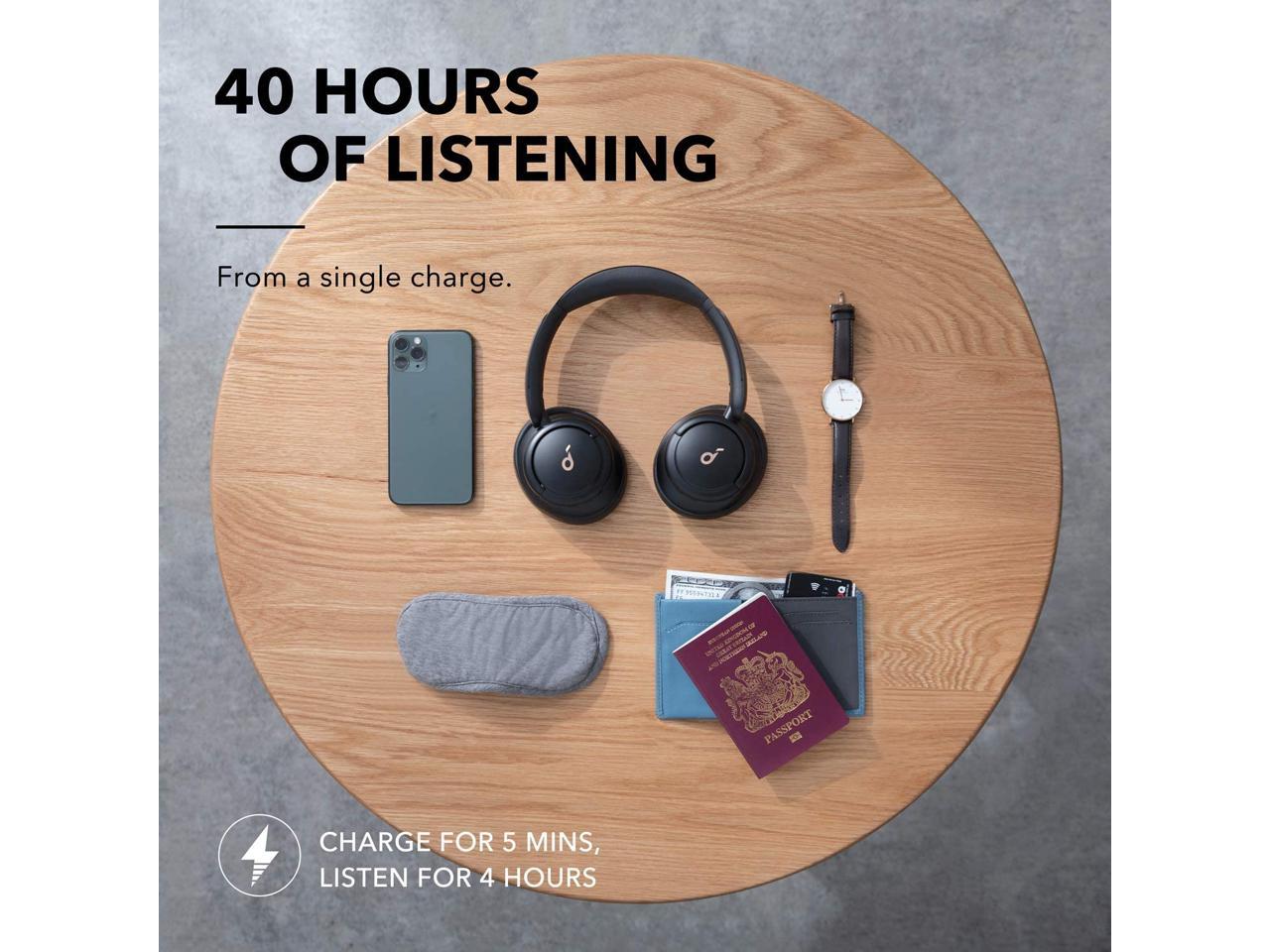 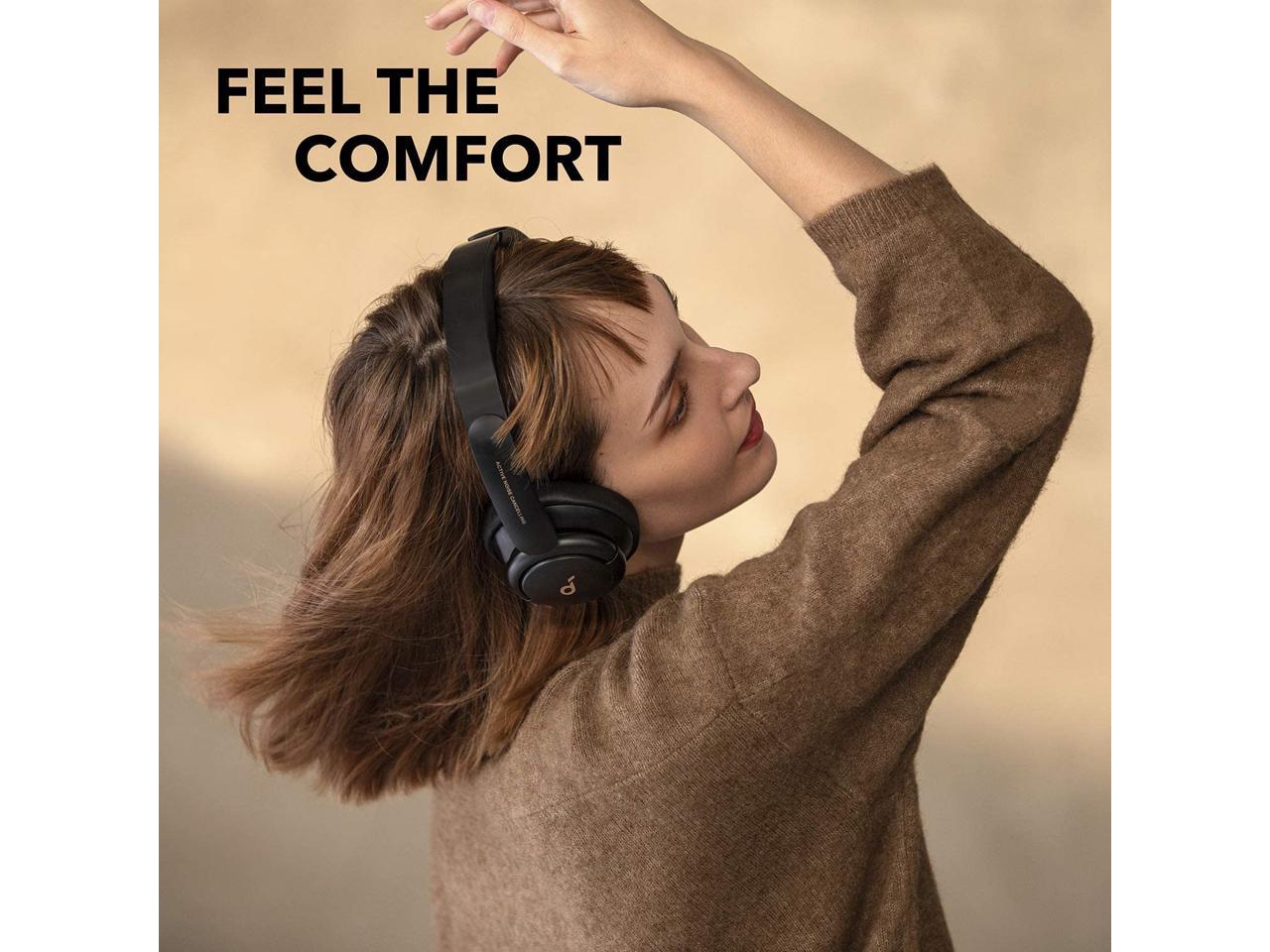 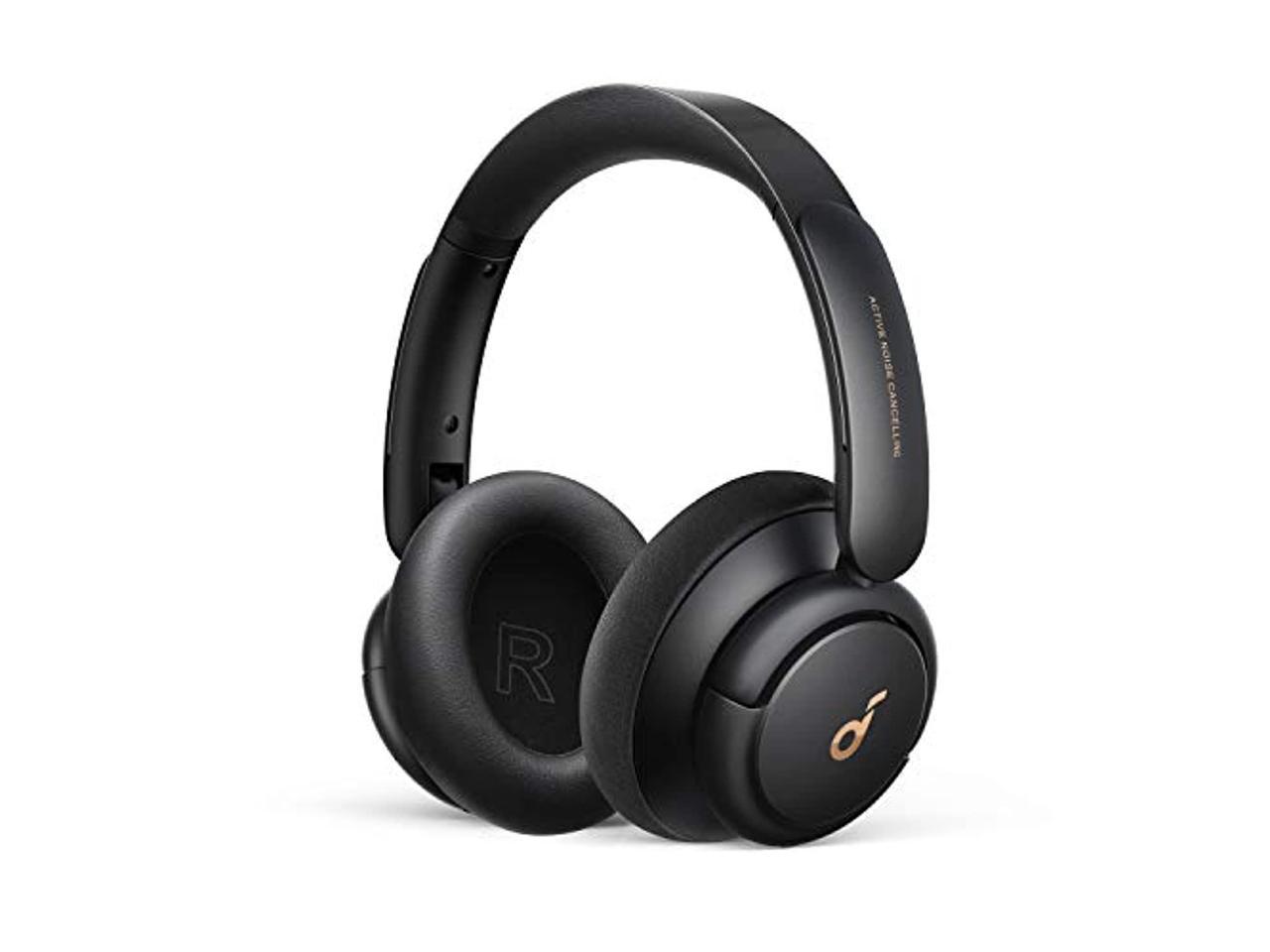 Enjoy a distraction-free listening experience with Life Q30 hybrid active noise cancelling headphones. Choose from three noise cancelling modes to hear the purest music wherever you are. Or you can customize your own noise cancelling modes. A simple short press will let you hear the world around you. You can pair the headphones with two devices simultaneously to make everything under control. Just put them on and play with background noise and your digital life, all with comfort.

Imagine the roar of takeoff and the endless drone throughout a flight—and then imagine it's gone. Life Q30's Transport mode cancels out up to 95% of engine noise to give you a more restful journey.

Tune out the chaotic soundtrack of the city streets as you walk. Outdoor mode reduces the din of cars driving past and blocks out the noise of the wind to ensure nothing stops your music from sounding its best.

You're trying to focus, but the air conditioner is whirring, people are talking in the background, and a coffee machine is grinding. Switch to Indoor mode to adjust Life Q30's noise cancelling to suit quieter locations while still blocking out distracting sounds.

Hear The World Around You

Let the sounds of the world into your personal space by pressing the right earcup for 1-2 seconds to activate Transparency mode. Ideal for when you need to speak to people or want to hear traffic.

Select a noise cancellation mode, choose from 22 EQ presets or customize your own, and tailor your own white noise soundscape for when you need to rest.

Enjoy all-day comfort thanks to the memory foam earcups and headband, plus a lightweight frame weighing just 9oz (260g). For a secure fit, Life Q30 active noise cancelling headphones have earcups that adjust by up to 15°.

Connect to two Bluetooth devices at the same time to switch between calls, video conferencing, listening to music, and more without needing to reconnect.

Pros: -The sound quality is hard to beat. They honestly match up to high-end Sonys. -New app connectivity and customizable equalizer. -Battery life is absurdly long. 60 hours will last you like, a solid month with light use. -Comfort is really good. -Noise cancellation is absolutely fantastic, with BT connection and 3.5 WIRED!

Cons: -Noise cancellation when wired does not function properly. Audio is lowered over 75%. - THIS FEATURE HAS BEEN PATCHED AND FIXED -No low latency codecs for BT connection. Massive lag with any gaming. -May experience some faulty build quality. -Was just shipped in a bag, was severe damage to the box.

Overall Review: Updated review: 12-9-20 5 STARS. Ankers customer service is unparalleled. They reached out to me to discuss my problems with this headset, as reviewed below. They worked with me and have delivered a giant fix via a firmware update. Anker has officially patched my number one problem with the headset, and now the ANC works when wired, and works very well. You can now enjoy those story heavy single player games and intense movie watching while wired, WITH Active Noise Cancellation, high volumes with a great custom sound profiles and tremendous bass response, NO LAG what so ever (as it's wired) and best of all, NO distortion what so ever. This is the huge problem that plagued the prior model, the Q20's, and now this is the nearly perfect headset, regardless of price. The microphone is still a problem for some people, but that should not be a main reason to buy this headset anyway. To make this set even better, all it would need is a low latency codec implemented. Perhaps this could be addressed through a future patch as well? That would mean they could be used wirelessly, (with a bluetooth transmitter) for ANY gaming and movies without lag. As they are now, there is severe lag in those use cases, but that's the point of a wired connection currently. The value of this set is now beyond even the big boys like Sony and Bose, who will charge you 200-300 dollars, for nearly the same performance found here with the Q30's. Unbelievable. Original Review: The main reason I bought these was for Ankers superior noise cancellation. The Q20's impressed me so much, that I'm on board for the foreseeable future. The main flaw in these, is that when wired via the 3.5 AUX cable (for the most minimum latency) Noise cancellation cuts ALL sound by at least 75%. The highest volume with ANC on, is FAR too low for any enjoyment. This set simply doesn't function correctly when wired. Anker has to understand that this is still such an important feature! The simple operating buttons do not work, such as volume up and down, the ANC limits volume over 25% and of course the mic does not work at all when wired. Now, hopefully there is a way to patch these headphones via firmware update to at LEAST have a proper, higher volume choice when wired WITH Noise cancellation activated. And I certainly hope they can avoid the ANC problems of the Q20, which was extreme distortion at high and low level sounds when 3.5 wired. A part of me thinks they haven't even tried to fix this, and just drastically lowered the default volume to avoid the distortion that plagued the Q20s? Other cheaper noise cancelling headphones accomplish noise cancellation with 3.5 wired perfectly! Even sets with a push button instead of a switch. Why can't Anker get this right? These do not have any low latency codecs. Just the basic 5.0 Bluetooth connection, which is fantastic for music listeners as latency does not matter in that situation, but bad for stronger connectivity, high quality/4K video/movie watching and most importantly, gaming. Apt-X of any sort would make a world of difference in connecting to certain devices and make the value of this headset skyrocket. Now, this doesn't make or break the set, the connectivity is still really GOOD. So this isn't a huge problem for many people. The design of the headset is great. The look, button layout and weight are all proficient. The buttons feel natural once you figure out where everything is. It's easy to get used to. Build quality on my unit is a mixed bag. So compared to the Q20's the ear cups are larger, a bit thinner and slightly less comfortable. The overall construction is a bit creaky, the plastic finish isn't ideal, as it attracts fingerprints and skin oil. The passive noise isolation (the general hug of the earcups) is weaker than that of the Q20's. The sound quality is fantastic. The sound quality beats the Q20's by a fair margin, and the customizable options through the app, are a welcome addition. The Q20 models only feature a "bass up" button function, which honestly just muddies the sound, and makes it a bit too boomy. The neutral sound of the Q20's was impressive for the price, but now a fine-tuned Q30 is so much better! Clarity, lows and highs are all better and less distorted than the Q20's at higher volumes. With the Q30s you can pump the bass up and literally make the ear cups rumble your brain (to the point that it made me dizzy!) and it is STILL a clearer sound profile than the Q20's "bass up" function! That really told me everything I needed to know about the purity of sound in this set. Pick a preset, and adjust the equalizer to your liking. My personal favorite is "classical" with some minor adjustments. You can have many "custom" profiles and swap between them on the fly to really determine the best sound profile for you. Simply wonderful. The battery life, as everyone has noted, is fantastic. No qualms there at all. 60 hours... is ridiculous! In a good way!

Pros: Very good for the price.

Cons: Only con is that it doesn't sound as good without noise cancelling enabled.

Cons: Plastic for the right side where it connects with the metal headband was defective, and broke twice. (I fixed once with some epoxy, but need to do it again) It's entirely possible that the damage was caused by my method of pulling it off my left ear so I can listen to someone talk while still getting music/games in my right ear. No low-latency wireless codecs, which means you have to go wired if you want to game, but since ANC still works with wired, it's not a big issue. Do have to have a seperate mic when wired though. (I really wish it was a 4-pole plug so I could use the integrated mics, since those are quite decent quality)

Overall Review: The sound quality, ANC, physical controls, and battery life are all competitive with much higher price headsets from other manufacturers. I have convinced several people to look for and buy Soundcore and Anker products by demoing them these headphones, my pair of Soundcore 3 speakers, and an Anker charger/battery bank.

Cons: - Need to use App in order to adjust the equalizer

Overall Review: I would recommend this product because it is easy to set up and is not expensive. No issues.

Overall Review: Great for the price, only real issue I had is if you connect it to more than one Bluetooth at a time, it can forget the volume and either be very loud or very quiet

Overall Review: I would definitely recommend these to anyone who is looking for great sound. And the noise cancelation is just a plus for me.

Pros: I don't know this brand but I bought it anyway after some good reviews from all over the internet. And when I put it on, it sounds acceptable and good only for Ipad and Iphone . See below why.

Cons: I was kind of disappointed because the headphone can not handle very loud sound output from my Creative SoundBlaster sound card out from my Logitech Z623 speaker. I like it loud and heavy bass but the sound gets distorted when I put too much energy I need

Overall Review: For the price I pay is what I expected to get. So if you just listen to Pop or light music this is the one you need. The bass out from the Ipad and cell phone is decent good, but not very loud enough the way I like it. I don't know how other headphone sound but this one is ok to go for the price I paid.