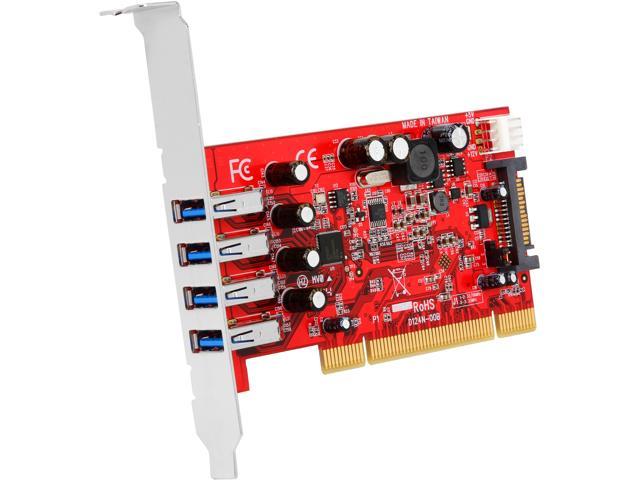 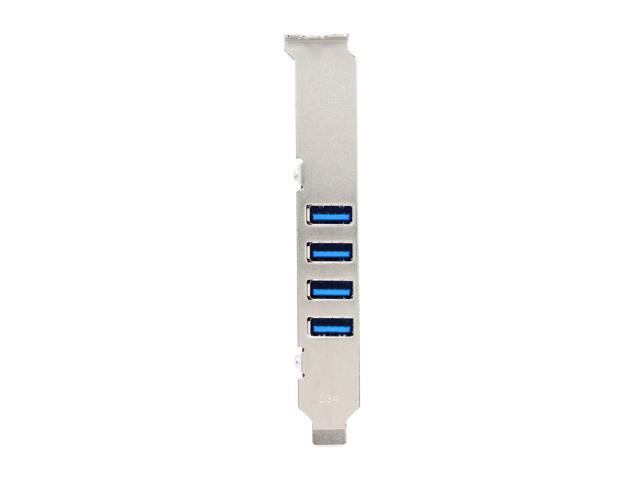 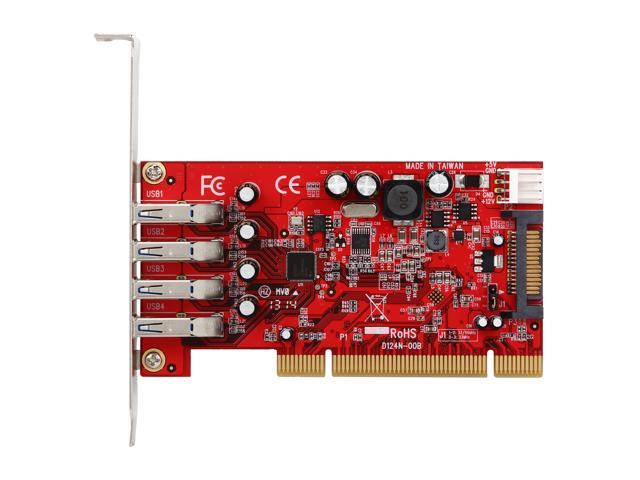 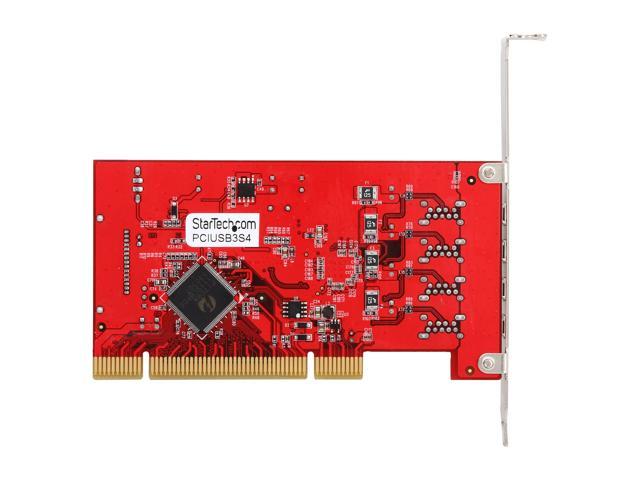 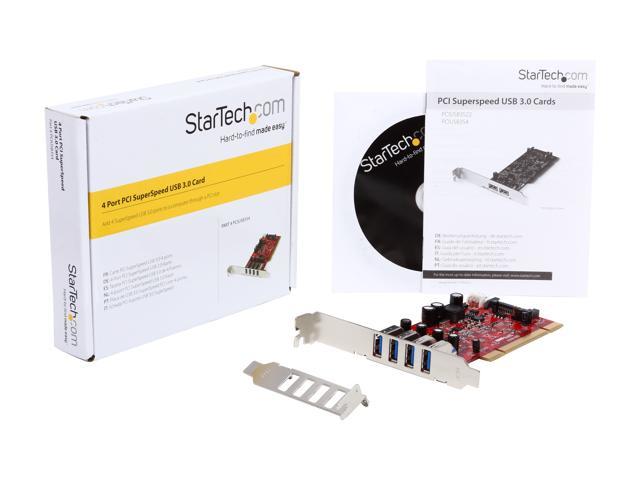 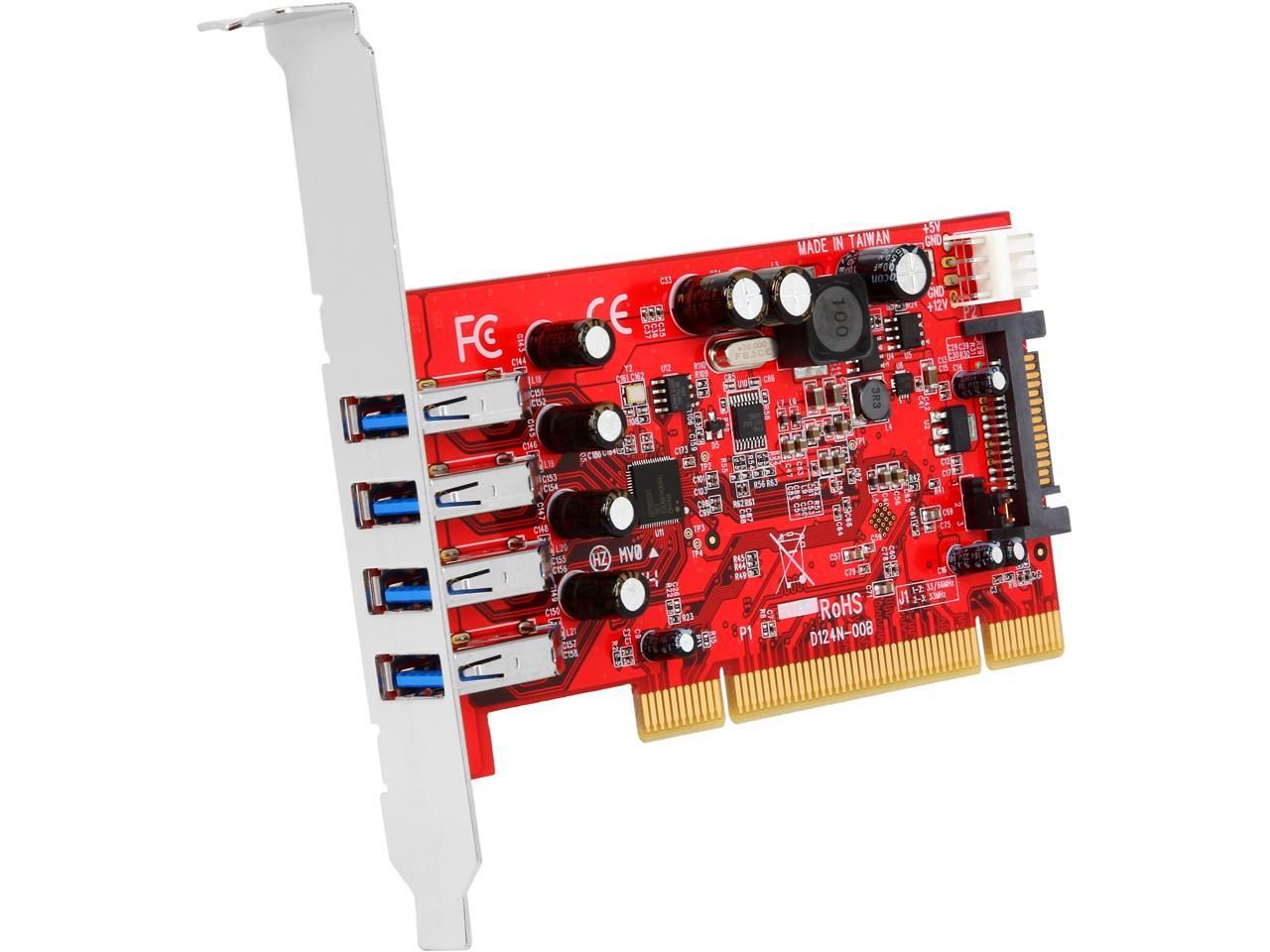 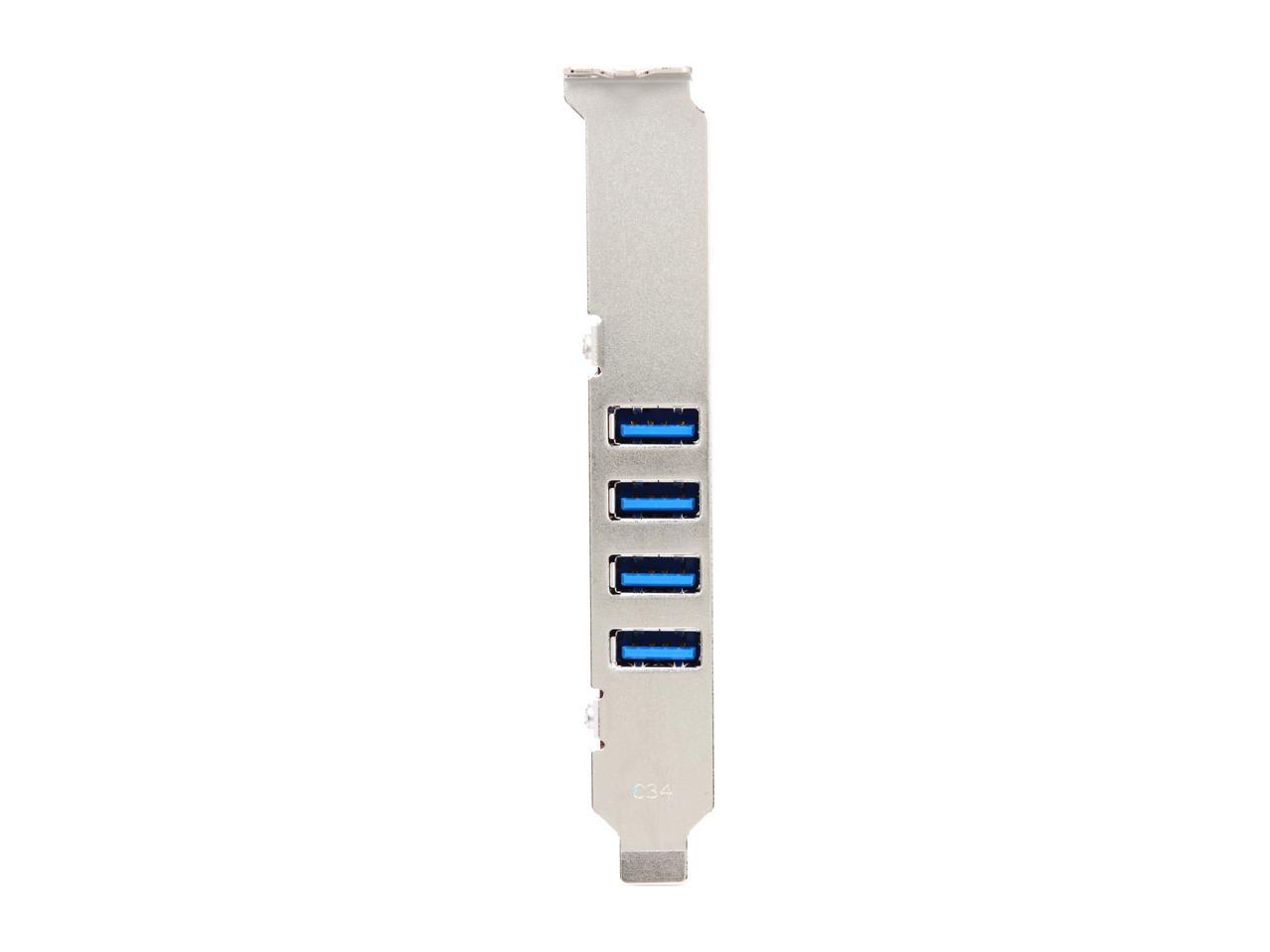 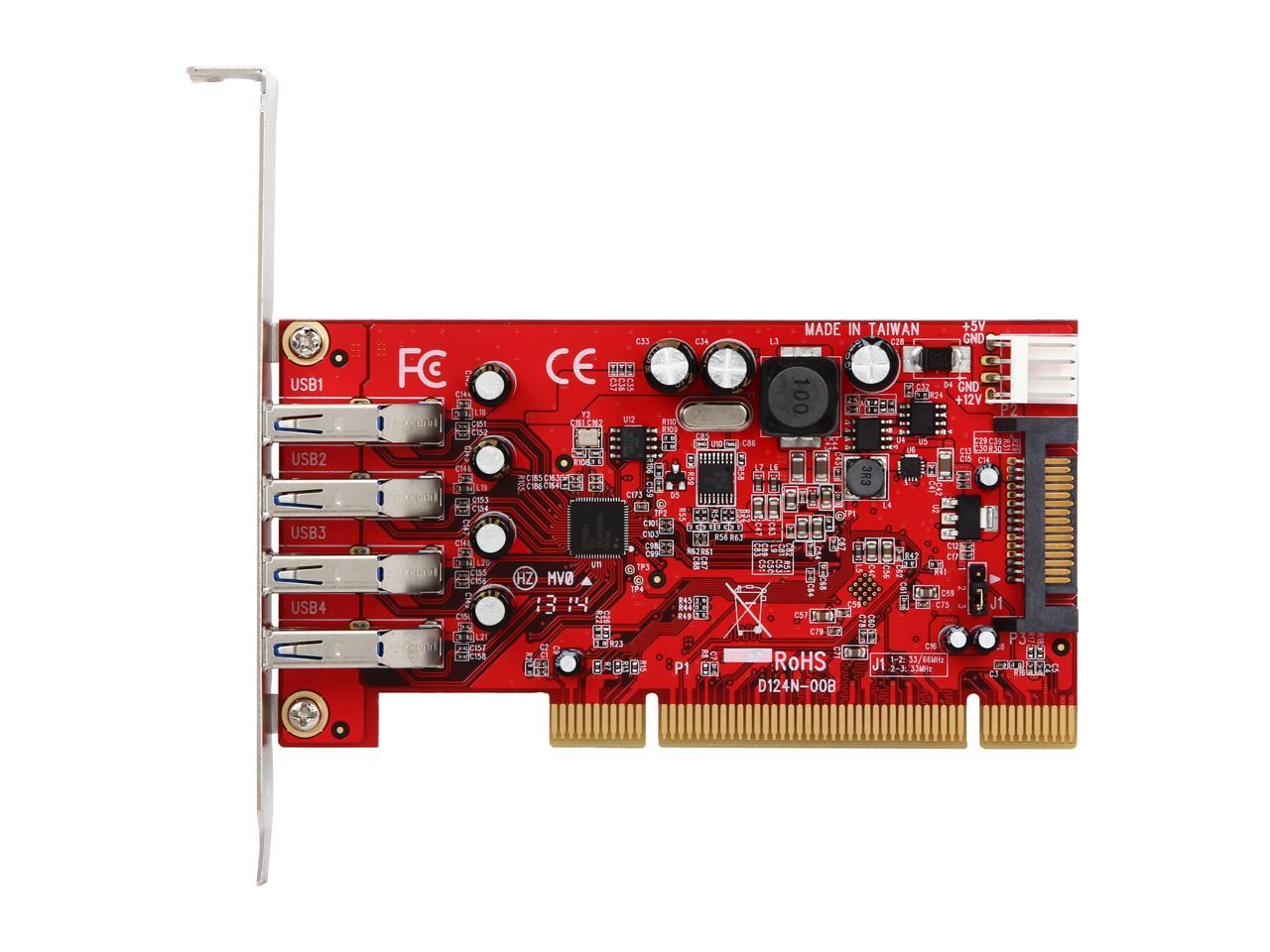 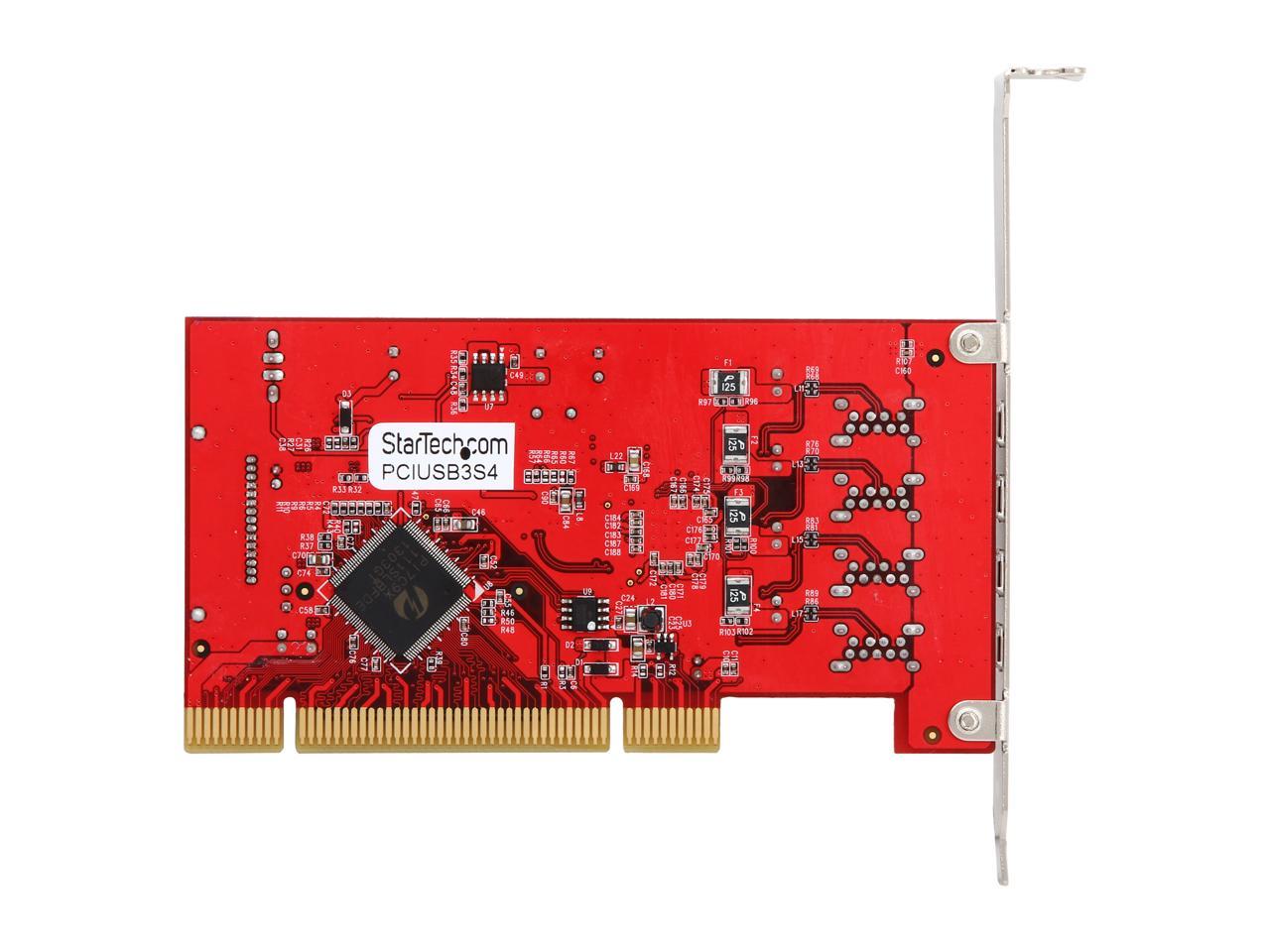 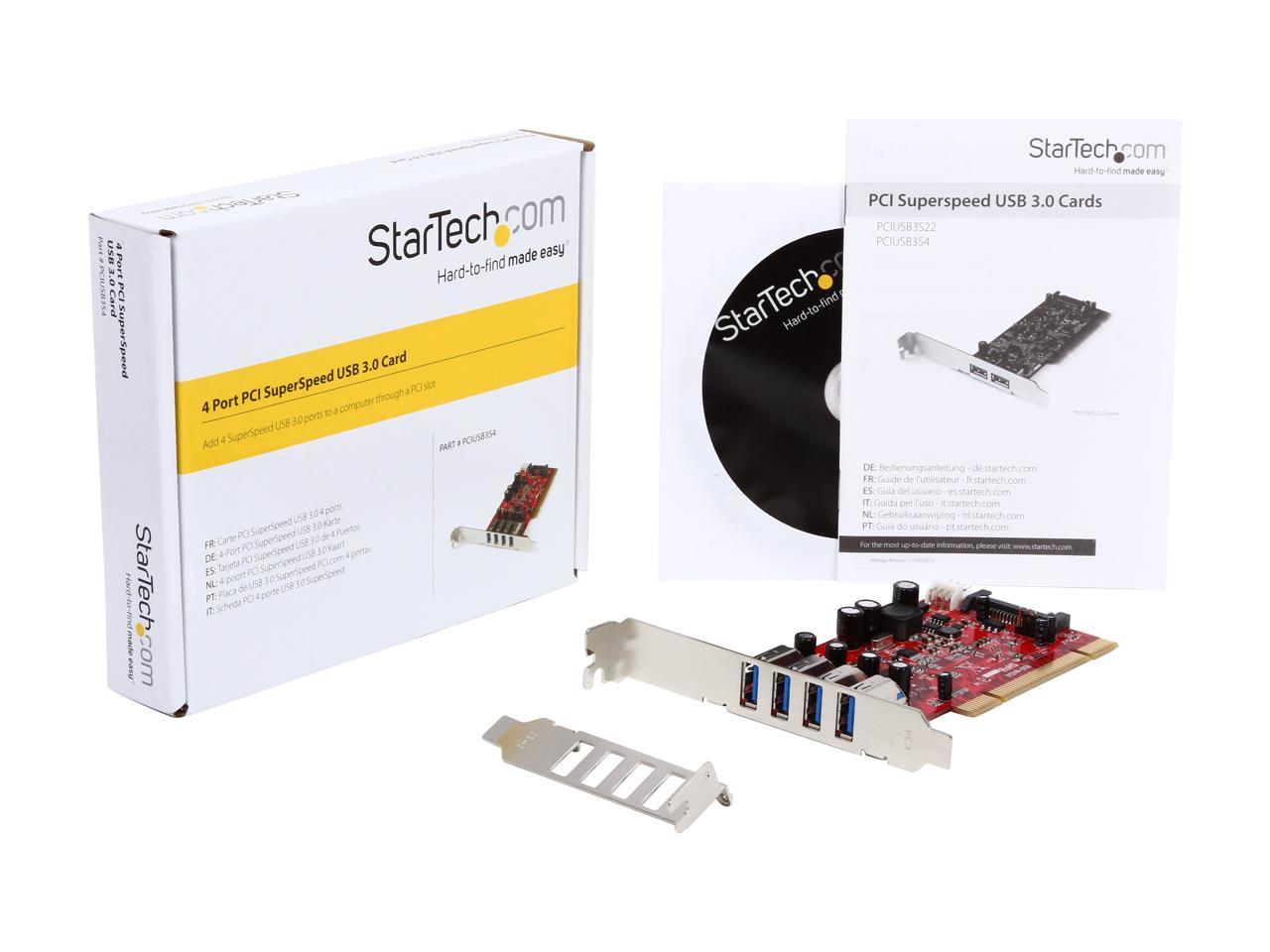 Learn more about the STARTECH PCIUSB3S4

Overall Review: This card is twice as fast as the built in USB 2.0 on my computer. However it is much slower than the USB 3.0 standard. This is not the cards fault, it is the limitation of the legacy PCI bus. This card provides enough power to power my external 2.5" laptop hard drives. You must connect an internal power source to PCI card. To achieve the best performance with this card, limit the amount of devices connected to it. Example - My keyboard, mouse, non USB 3 devices are running off my USB 2.0 ports. When I was running these off the USB 3.0 card it dropped transfer rates by 10MB/s! Tested using a USB 3.0 to SATA adapter with 256GB SSD connected. Bart's Stuff Test v5.1.4 USB 2.0 (built-in USB on my computer for comparison) 33MB/s Read 29MB/s Write USB 3.0 (Startech PCIUSB3S4) 83MB/s Read 58MB/s Write USB 3.0 (Built-in to newer PC) 142MB/s Read 158MB/s Write

Cons: - High Cost. This is twice the price of an equivalent PCIe card. - Not Plug N Play. Requires loading drivers from CD. - Windows OS will not recognize card.

Overall Review: I needed more high speed USB 3.0 ports for a Lenovo ThinkCentre M58p SFF desktop that I had set up as a Plex Server. I had already used up the one PCIe slot for an eSATA card and only had a PCI slot left. This was the only 4-port USB 3.0 PCI card I could find so I purchased it. The cost was more than double that of a PCIe card from the same manufacturer but it was the only one to fit the requirements. Other reviewers have stated that Windows OS will not recognize the card automatically. The card comes with a CD that has the Rensesas drivers on it and the instruction manual that comes with the card clearly and specifically states how to load the drivers. If your PC doesn't have CD drive, you can download the drivers from the startech.com USA website. After switching out the bracket for the low profile one to fit in the PC, installation was quick. I did need to make a slight adjustment to the bracket (loosening the screws and readjusting the position) to get the USB 3.0 cables to fit in the ports. That only took a minute, or so. After loading the drivers from the CD and rebooting, the PC the card was recognized and has functioned flawlessly. I tested read/write speeds using a 3GB .mp4 file and a Seagate 5TB External Enclosure Expansion Drive. Using the USB 2.0 ports on the PC I got the following: Read - 24.2MB/sec maximum Write - 22.0MB/sec maximum (more like 18 MB/sec average) Using the USB3.0 ports on the Startech PCI card I got the following: Read - 97 MB/sec maximum Write - 87 MB/sec maximum If I do the test on a Lenovo ThinkServer TS-140 that has SATA III buses and USB 3.0 ports connected to the same Seagate 5TB expansion drive I get the following: Read - 134 MB/sec Write - 111 MB/sec Yes, the Startech USB 3.0 ports are slower than those on a new machine with SATA III bus but they are 4X faster than the USB 2.0 ports on the PC. This is definitely a great improvement. If you are transferring large amounts of data, you will definitely appreciate the speed increase! In conclusion, if your PC does not have the ability to use a PCIe card and you need higher transfer speeds than USB 2.0 provides, this is the only PCI card available new. It is pricey, but it works. I deducted one egg because of the high cost and because the card is not PnP. The card appears to be well built. I hope it lasts.

9 out of 9 people found this review helpful. Did you?
Brandon H.
Ownership: more than 1 year
Verified Owner
Great performance, LIFETIME warranty, 33/66 MHz operation, both SATA and SP4 power connectors4/6/2016 11:54:34 AM

Pros: 1. Performance I have both PCIe and PCI-X (it's a server board) on this machine, and I have another USB 3.0 card that uses the same Renesas chip on the PCIe bus, so I did a performance comparison using the same SATA drive (WD Blue 2.5-inch 500GB - WD5000BPVT, reformatted) on a USB 3.0 to SATA cable (StarTech USB3S2SAT3CB USB 3.0 to 2.5" SATA III Hard Drive Adapter Cable w/ UASP) using DskSpeed from roadkil-dot-net Interestingly enough, on my system the PCI 3.0 card matched the performance of the PCIe USB 3.0 card. Note: This is a PURELY COMPARATIVE test, NOT a performance benchmark. It answers the question of "How does it compare to a PCIe USB 3.0 card?" Startech PCIUSB3S4 on PCI bus: Max Read: 95.79 MB/sec (512KB blocks) VANTEC UGT-PCE430-4C on PCIe bus: 94.15 MB/sec (256KB blocks) a. Is it faster than USB 2.0? DEFINITELY YES. 90 MB/sec is 720 Mbps, which is well beyond USB 2.0's 480 Mbps bandwidth. b. Is it as fast as a PCIe USB 3.0 card? On MY system, yes, *but* I have PCI-X slots and I switched my PCIUSB3S4 to 33/66 MHz mode, so it's probably running faster than it would on a standard PCI bus. On the other hand, my PCIe is only v1.0, so I'm pretty sure a _modern_ system's PCIe or native USB 3.0 would be faster than the results I'm getting (in which case the answer would be "No, it's not faster than PCIe") Still, if you're on an older PCI bus system, I think this is a reasonable addition to the system, as it's definitely faster than USB 2.0 2. Warranty I've had this card for over a year and it recently had an issue. I contacted Startech, explained the symptoms and what I had tried, and they quickly issued an RMA replacement. Got what appears to be a brand new card (full retail box) back and I'm running normally again. Excellent support, justifies the premium. 3. 33/66 MHz operation It isn't mentioned in the instructions, but there's a jumper on the card for 33 MHz and 33/66 MHz. The default is 33 MHz, but I have PCI-X slots so they can run at 66 MHz, so I set my card for 33/66 MHz. Not sure if there's a performance difference, but at least the card can run at 66 MHz and not slow down other cards on the same bus to 33 MHz. 4. Both power connectors Having both the traditional SP4 floppy drive style power connectors and SATA power connector eliminates the need for adapters or finding the right plug. Less extra cabling means better airflow.

Cons: 1. High price, but IMO it is justified with the lifetime warranty. 2. Windows (7 at least) does not have native drivers for the Renesas controller, but they come on the driver CD, *and* drivers are available on Startech's site as well.

Overall Review: Definitely use the driver from the CD or download the driver on Startech's site. They even had a firmware update (though my replacement card was already at the newest firmware version). You probably should ask yourself, "Do I *really* need to add a _PCI_ USB 3.0 card?" If the answer is yes, this is a good choice. It you're on the fence, you might want to consider spending the money to upgrade your system to a modern one with native USB 3.0

Cons: Would have been nice if they had supplied one internal USB 3.0 along with the card also besides the 4 external ports.

Pros: Works like a champ. Real world transfer speeds very near onboard USB 3.0 ports on a companion computer

Cons: None really. Would like to see a Next Gen card with external SATA/eSATA powered ports..

Overall Review: This is one of the first USB expansion cards of any generation I have seen come close to claimed functionality. Most are sad performers. I have a couple of USB 2.0 expansion cards I use for paperweights.

Cons: Only the time it takes to put it in the slot !!

Overall Review: This PCI card allows more slots of a LGA 1155 XEON server board to be used.

Did you find this review helpful?
Michael L.
Ownership: 1 month to 1 year
Verified Owner
Disappointed and Surprised Not Compatible2/25/2019 2:01:48 PM

Pros: Startech tech support and customer service tried to help, very prompt to respond, offered to RMA to replace with another unit.

Cons: Not compatible with my motherboard apparently, but how is the customer supposed to know this? There is no compatibility chart or any info provided by the vendor where a customer can look this up. Here is what I tried: - install onto Windows 7 pro, then upgraded to Win 10 latest to try - upgraded bios, all drivers, chipset, etc. - Uninstall and delete drivers, reinstall as admin - Shutdown, power cable out, install/reinstall card, boot up - PCI card jumper adjustment (there is a jumper - BIO usb compatibility settings No luck. Unfortunate that they would not let me return something I cannot use.

Overall Review: Startech says there are too many mobo's to test for compatibility. If so then you should simply state this to be the case and it "usually works but no guarantees so take your chances"

Did you find this review helpful?
Manufacturer Response:
Thank you for your review of PCIUSB3S4. We apologize for the issues you've had with it and hope to help. We found your case with our Technical Advisors, and based on the information we have and the troubleshooting done, it seems this may not be resultant of incompatibility, but a faulty card. We'd be happy to provide a replacement card under PCIUSB3S4's lifetime warranty. To get your replacement, please contact our Technical Advisors again at 1-800-265-1844 or www.startech.com/chat and mention your case number. We're available 24 hours a day, 5 days a week. Sam, StarTech.com Support