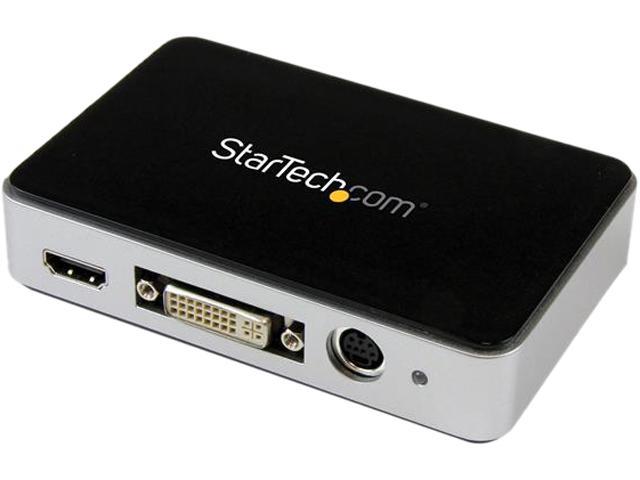 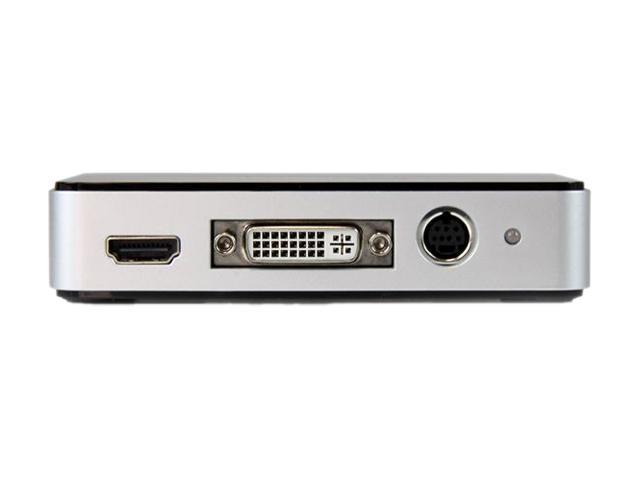 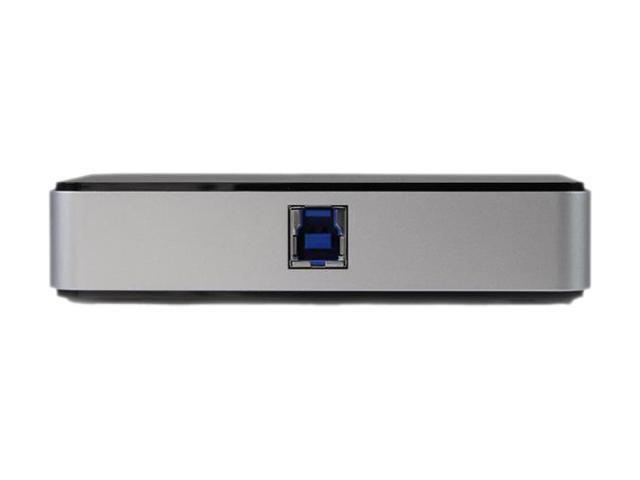 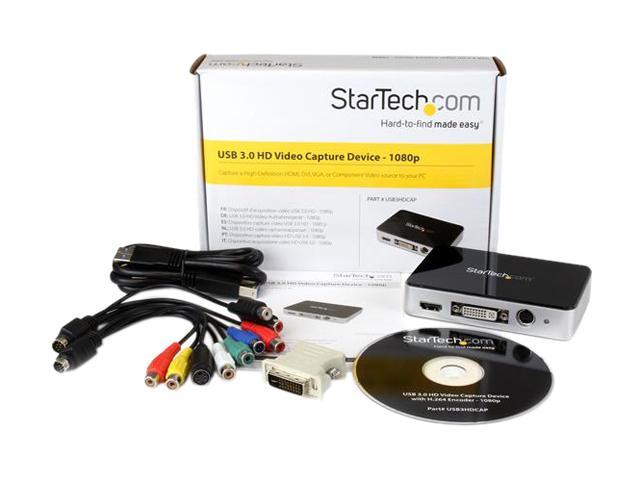 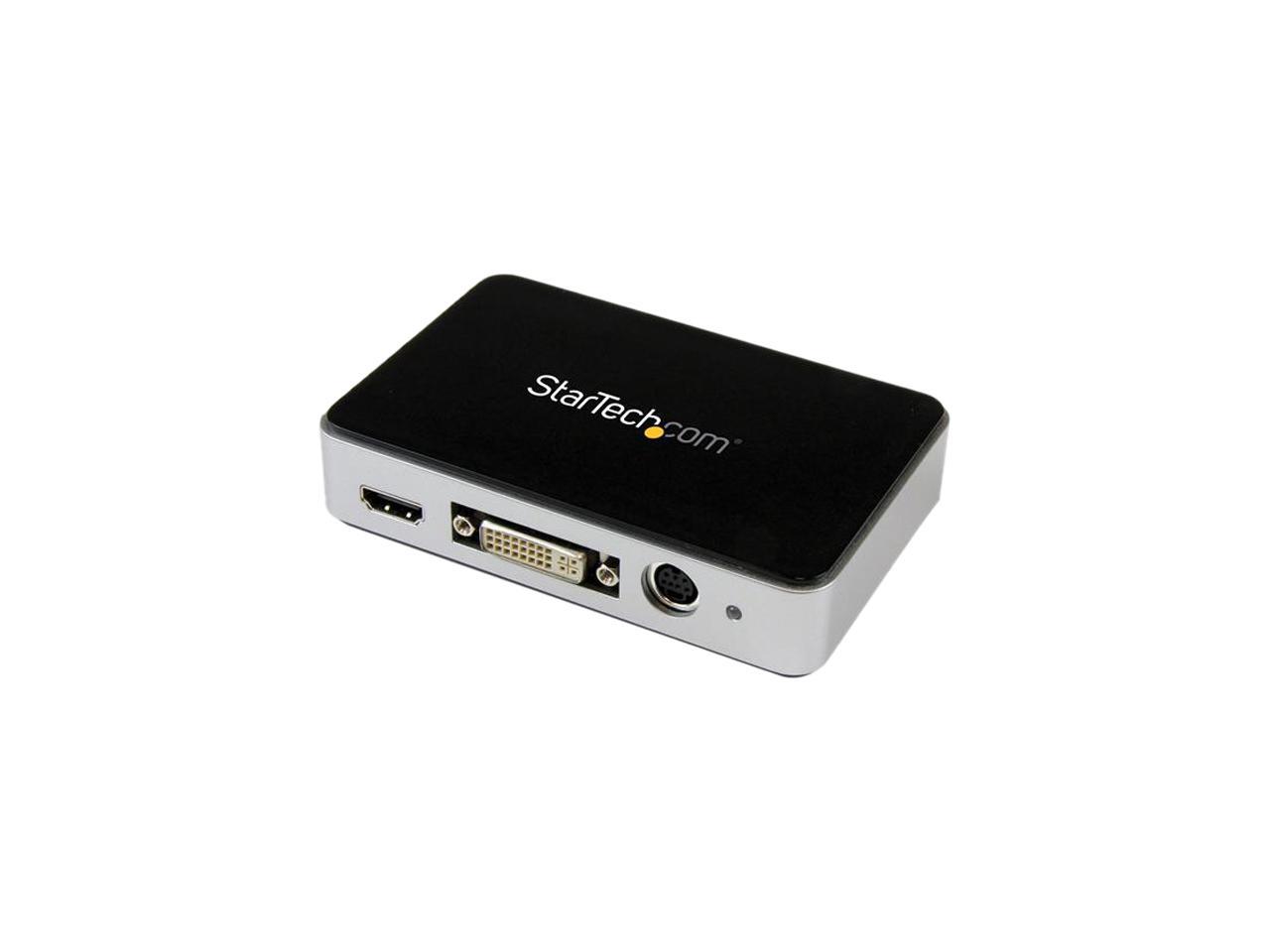 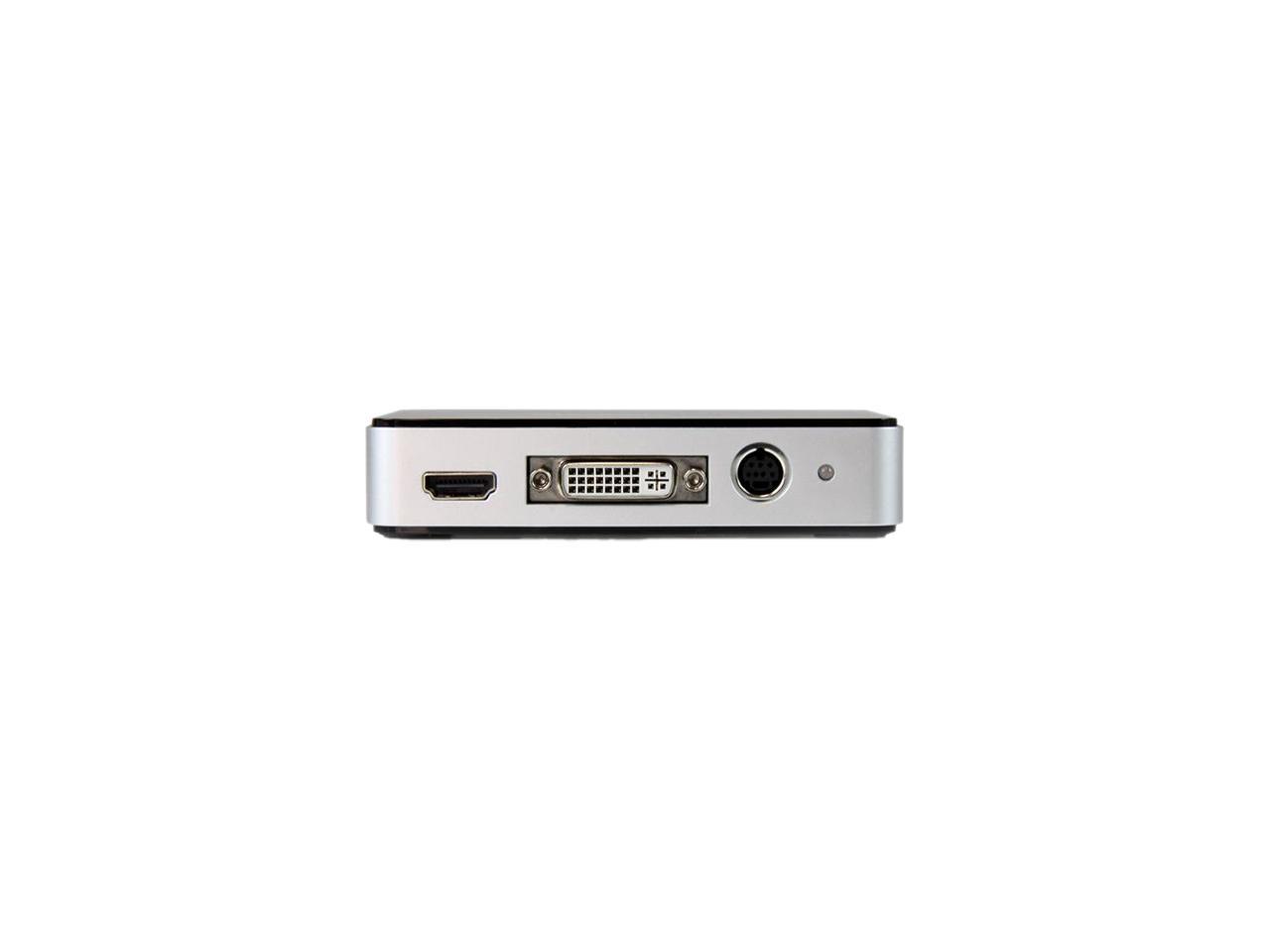 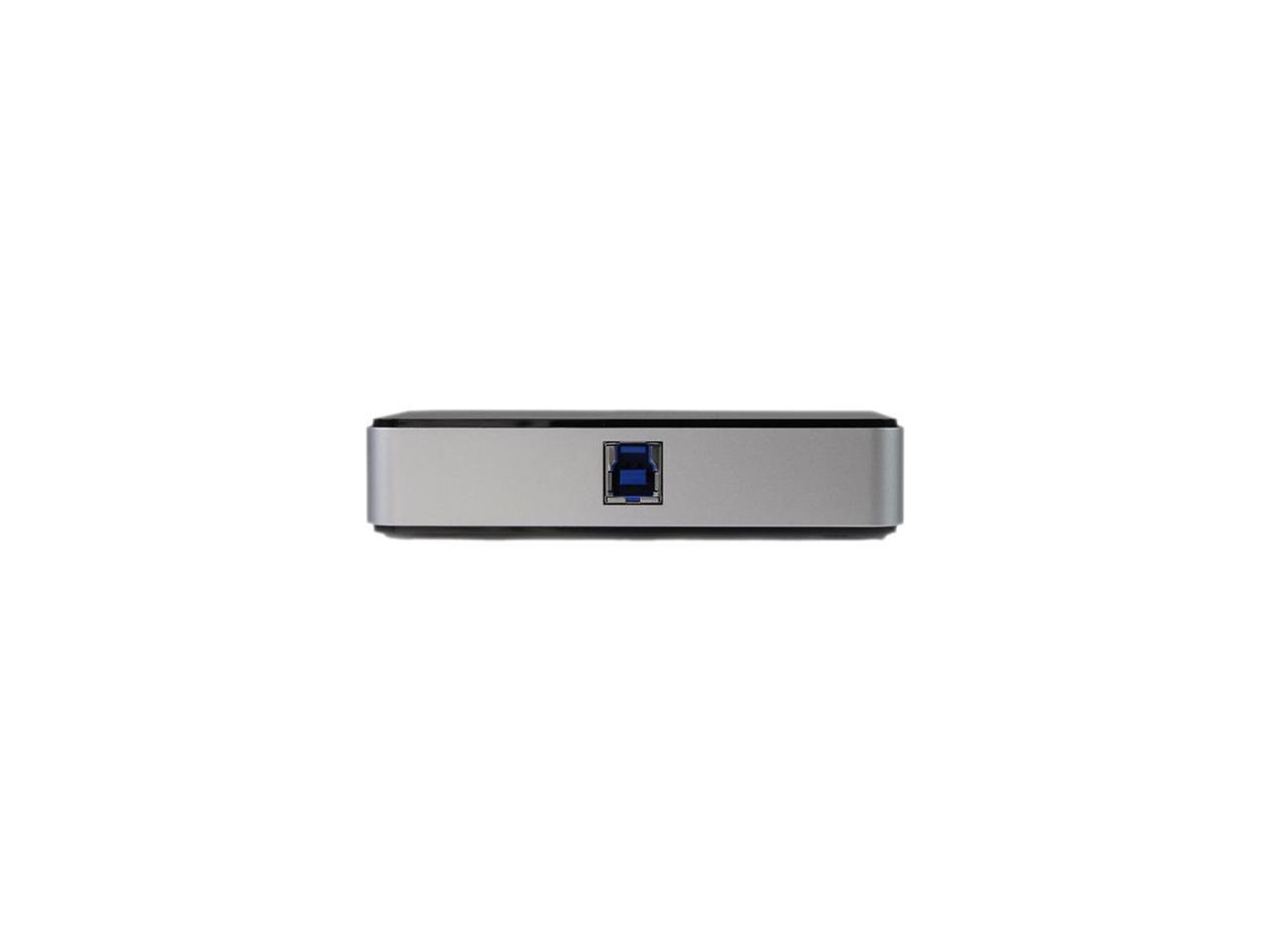 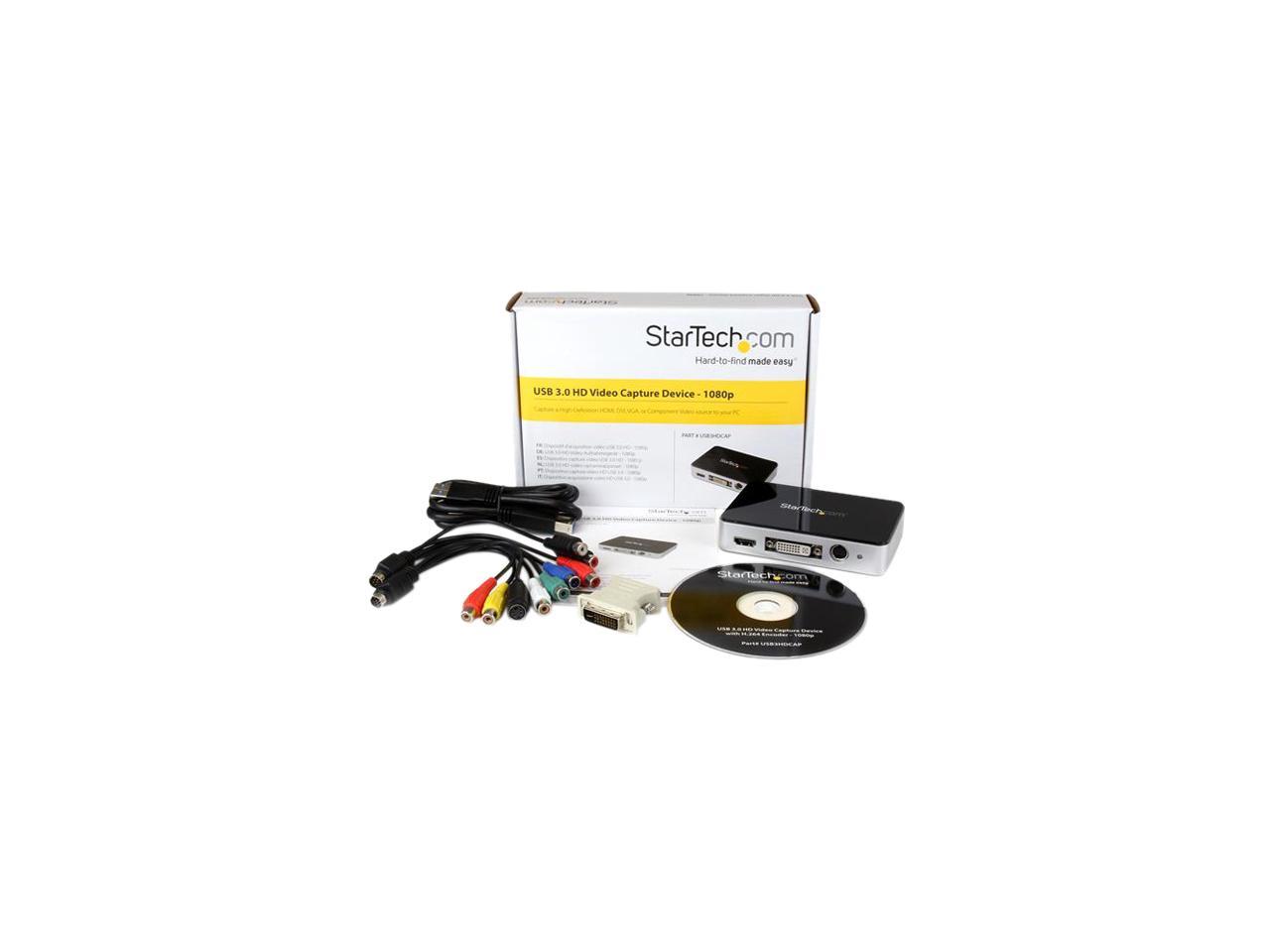 The StarTech USB3HDCAP external video capture device lets you record Full HD 1080p video and stereo audio onto your computer. It connects to your host computer via USB 3.0, which offers adequate bandwidth to capture 1080p video at up to 60fps. Multiple video inputs, including HDMI, DVI, VGA, Components, Composite and S-video, allow this gadget to work with various devices like computers, camcorders, POS terminals, game consoles and more. And with high quality, high efficiency H.264 encoding that's compatible with multiple device platforms, this device is a perfect solution for capturing high-definition video for editing, compiling, and archiving.

Record lossless video at 60 FPS ensuring every frame of content is saved, unlike 30-frame-per-second capture devices that only catch half the action. 60 FPS exactly matches the output of most computer video cards, which is great for recording the output from your PC, server, or POS station when creating software training and tutorial videos. The included software encodes in H.264, the most widely adopted video codec in the world, ensuring your video captures will be compatible with almost any device platform such as PC, Mac, iOS and Android with no editing or converting required. H.264 is also widely supported by most software titles including Adobe Premiere and Windows Media Encoder. Plus, the software not only lets you capture and export videos, but it also lets you take screenshots, schedule recordings and instantly stream your video source over the Internet using online services such as Twitch or Justin.TV. With multiple A/V input options you can capture from a wide variety of sources including HDMI, DVI, VGA, and component. You can also use this capture card with A/V adapters to record other video sources such as SDI using the SDI to HDMI converter (SDI2HD). Support for a variety of A/V device is ideal for archiving analog video footage into a digital database.

The device also includes easy-to-use software that’s compatible with NTSC and PAL systems, making it a must for professional video archiving applications where source media can change from project to project.

Learn more about the STARTECH USB3HDCAP

Pros: -low latency; you can play on your PC through OBS with minimal lag if you want -can play pretty much any analog device -Built in de-interlancing option in the settings menu

Cons: -no passthrough, so you need a cable splitter if you plan on capturing from a TV

Overall Review: I've been using it for a while and it's been really reliable! Stick with the official firmware though; The fanmade custom firmware floating around can blue screen your computer.

Overall Review: This device's drivers does not present both the audio and video as selectable devices in Windows 10 which means it will not provide both audio and video from the HDMI stream to programs such as Microsoft Teams and Skype. The video stream is made available and selectable within these programs but the audio stream is not. The StarTech StreamCapture application can access both the audio and video from the HDMI feed but not other Microsoft programs. If you want a more compatible device, I'm told the UVCHDCAP is the one that will seamlessly in Windows across all applications.

Overall Review: Would not recommend Would not purchase again