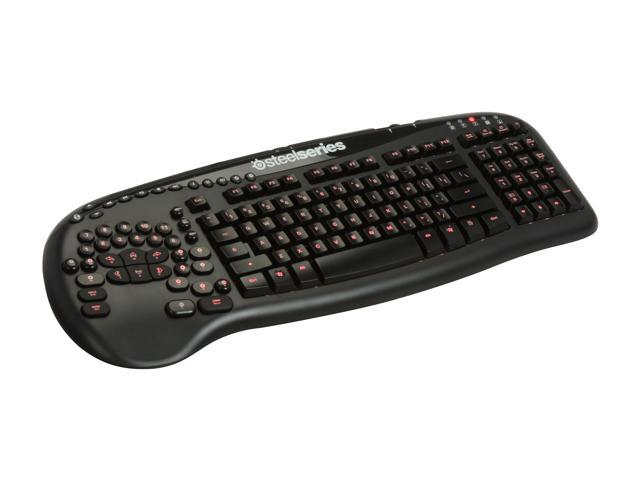 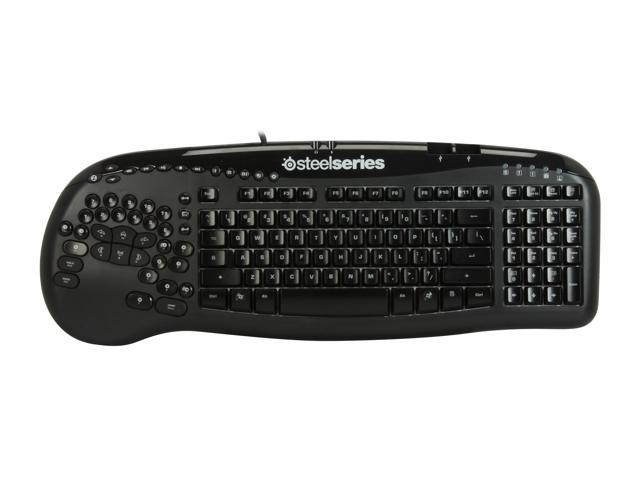 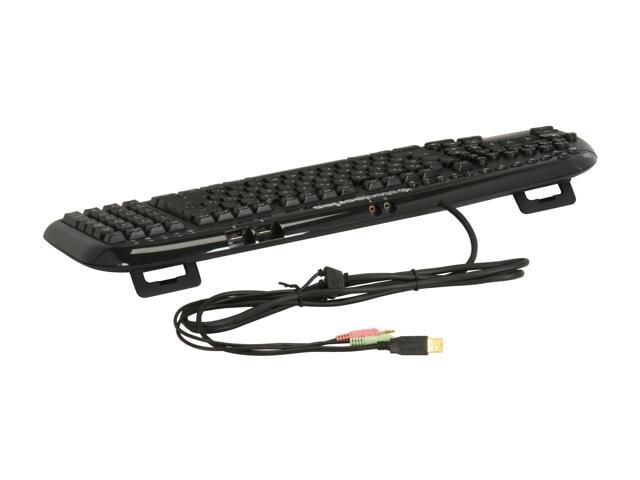 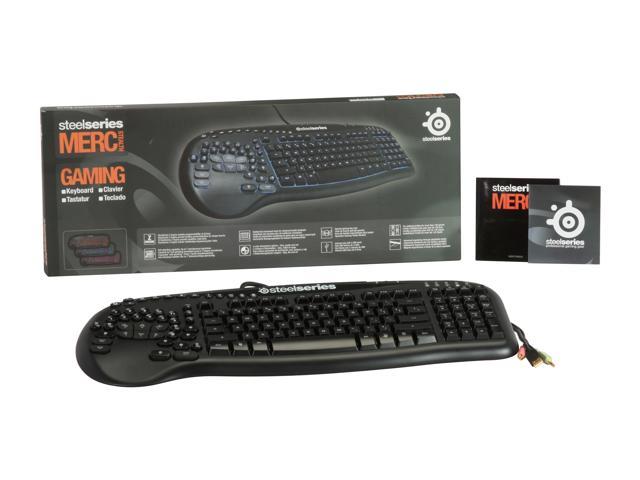 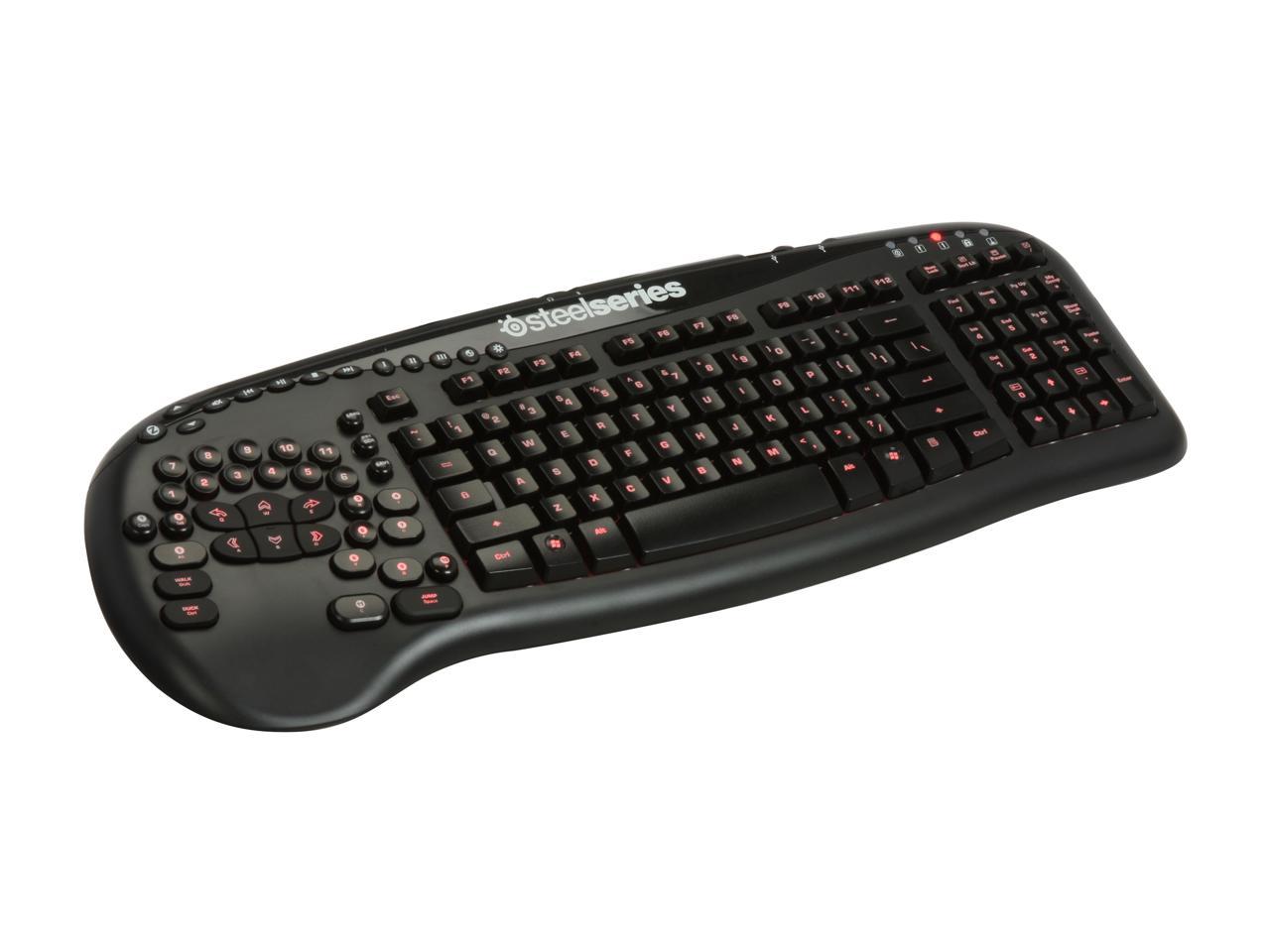 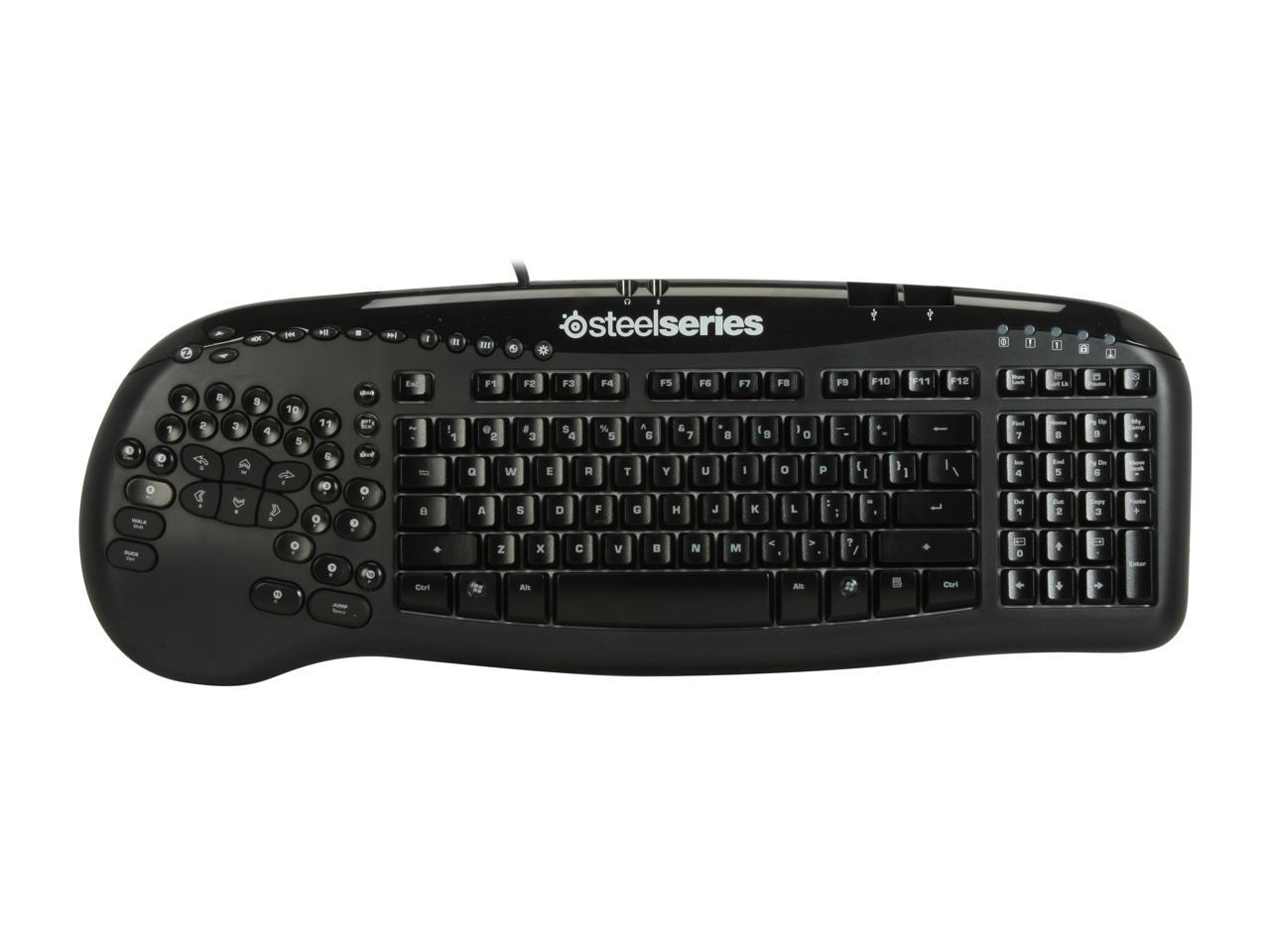 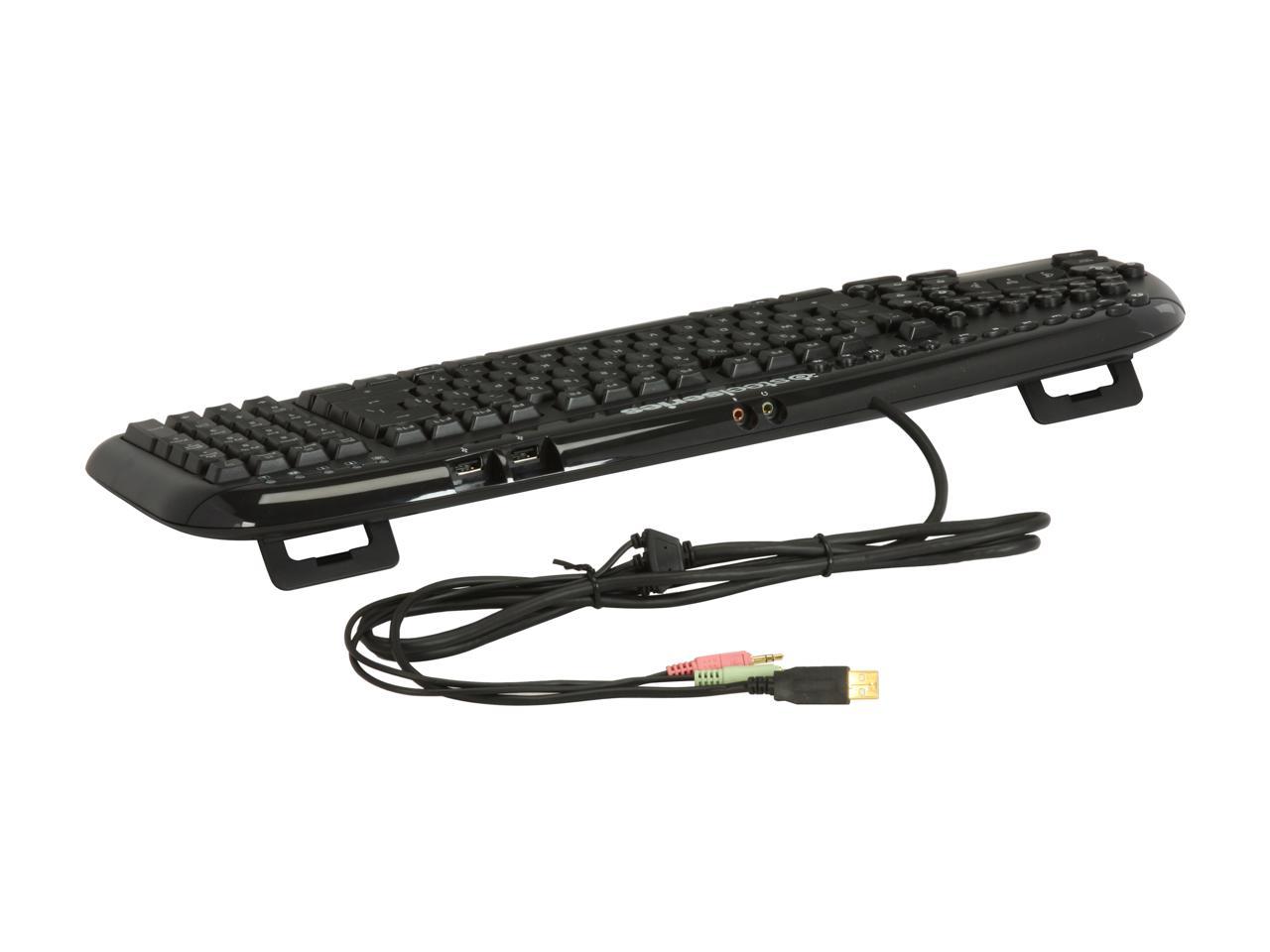 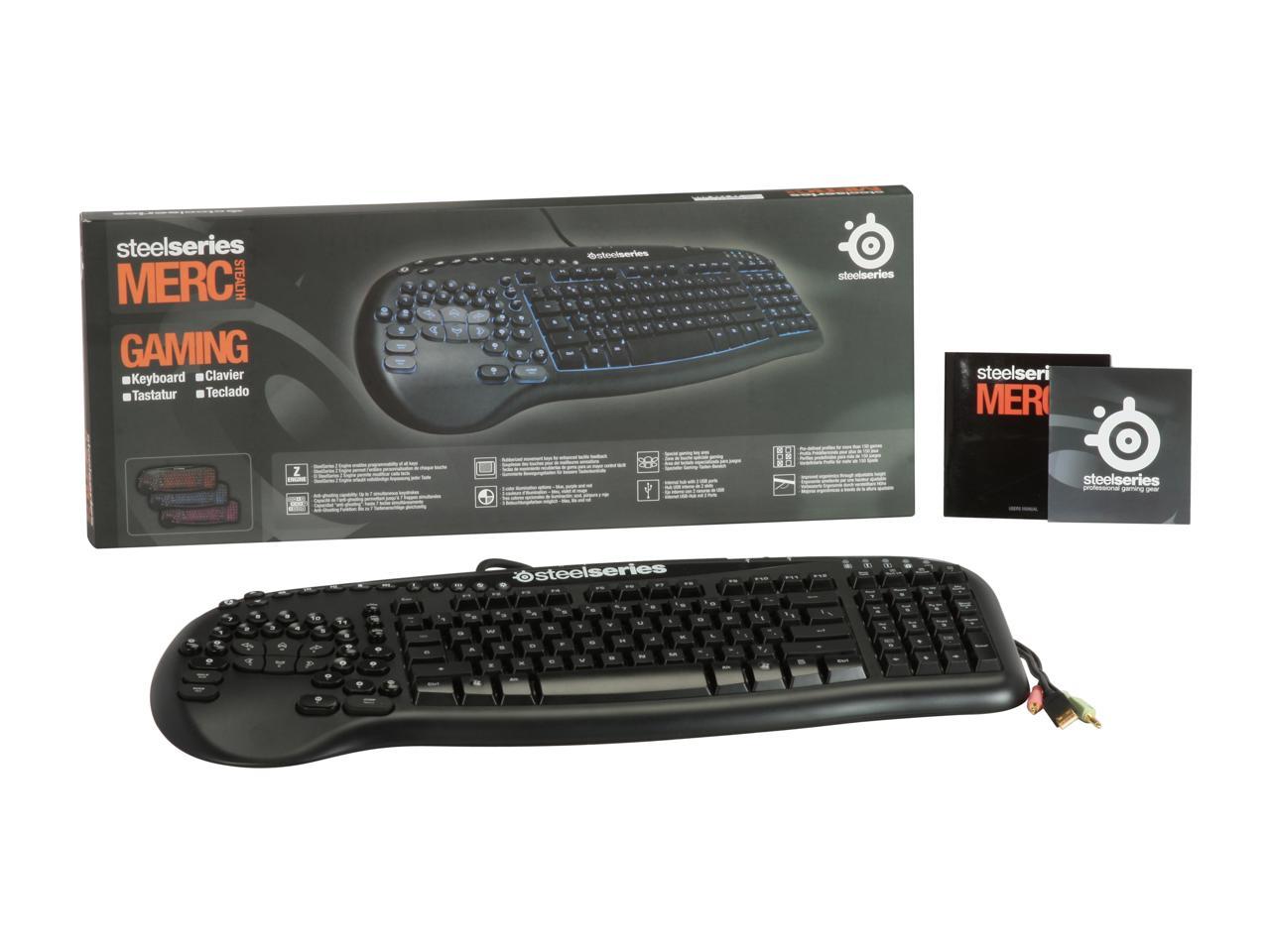 (158) Write a Review
See more "ergonomic keyboard"
OUT OF STOCK.
Overview
Specs
Reviews
The SteelSeries Merc Stealth gaming keyboard is a FPS gamer's dream come true! This versatile keyboard features 34 dedicated gaming terrain keys, making it easier and more intuitive than ever to walk, run, jump, crouch and move directionally in games. These dedicated keys are tilted at 11-degrees and are ergonomic and comfortable no matter how long you play. The keyboard features 3 different illumination colors (blue, red and purple), which can be set to 4 different illumination modes (subtle, ambient, intense and off).
SteelSeries Merc Stealth supports simultaneous keystrokes and features a number of hotkeys for multimedia, navigation and other one-click controls. The keyboard features two USB 2.0 ports, gold-plated microphone and headset jacks all connected through a gold-plated USB connector. All keys on the keyboard can be programmed with the powerful SteelSeries Z Engine software, allowing for programmable keys and easy to use drag-and-drop macro creation. Now get out there frag some enemies!

Cons: first one didn't work so well, but newegg replaced free: replacement is flawless--can't think of anything I don't like about it, if forced to come up with a con...when I boot up it always starts off with red, and I prefer the blue...QQ

Overall Review: it is a good keyboard with a lot of great options for gaming. Any company can have a dud get out the door, and the RMA process was no hassle. Besides the obvious "cool factor" in its appearance, its a very useful and versatile board. I have used it on computers as old as a 7 year old gateway (XP) without a hitch. I would buy it again without hesitation--and buy it from newegg

Pros: As far as gaming keyboards go, the Merc Stealth is exceptional. The keys are precise, are nicely spaced apart and feel sturdy and smooth. The back light is an excellent touch, and the potential that this keyboard has to the serious gamer is unfathomable. The keys on the left hand side of the keyboard (where it's angled at 11 degrees) allows WoW players to be able to easily keybind any number of abilities in an ergonomic fashion. During arena matches, I no longer have to worry about "fat fingering", or mis-clicking an ability. No reaching halfway across the keyboard with your left hand or awkwardly pressing buttons that eventually leave your hand feeling cramped. With other FPS and RPG games, it's performance remains stellar. Modern Warfare 2, Age of Conan, Everquest II, to name a few. If you are serious about your game, then this keyboard is worth every penny. Don't let the price tag deter you - it's a worthy investment.

Cons: The only issue with this keyboard is, the adjustment period or "breaking in" period of this keyboard is a little bit more then your average keyboard. Getting where all of your abilities can take a bit, leaving you looking at the keys more then at the gaming screen. It took me about an hour and a half before I started getting it down. A tip for WoW players: go to any major city and just wail on a target dummy. For any other game, just find an open area and just start chaining moves. Or just find some easier, lower level monsters to beat on until you start getting it down. Once you do, it's SO worth it! The reason I had to give it 4 stars is because the red lights indicating Num Lock, Scroll Lock, etc, are a bright, irritating red. Even with the red backlight mode on, they tend to stick out like a sore thumb. It's, again, something that grows on you, but they could've made it change colors along with the other million keys on this thing.

Overall Review: The "Z" software that you have to download to use the keyboard is a little bit tricky to get at first. If you just want to plug and play, you don't have to touch it at all, but if you wanted to program the I, II, and III keys to start whatever game you want (yeah, cool, right?) then you might have to do some exploring. Otherwise anything as far as key binding for whatever game can be done in the game. The media buttons are great. They worked for me on Zune, ITunes and WMP, nothing special about these but again, it's nice not to have to minimize to change, pause or mute a song. The added USB ports on the keyboard are great, currently have my cell phone charger plugged in along with a few other tinkers. Just be wary that you need to plug the speaker input into the keyboard, and the keyboard has it's own speaker input (and microphone input) so you can have access to the media/voice buttons. They won't work otherwise.

Pros: Nothing beats the size & placement of the left hand gamimg keys on this board!! I bought this keyboard for a friend after using the Z-Board that Steelseries bought and now manufactures for a year now and have almost, no, actually become dependant on it!! I would have bought the Merc when Z-Board was making it but it wouldn't fit on my keyboard drawer along with my mouse!!

Overall Review: Watch out as this is a rather wide keyboard so make sure you have room for it with your setup!!

Pros: Works excellently for games, especially those with a WASD control setup.

Cons: Insert, Home, Page Up, Delete, End and Page Down do not have their own keys. You must turn Num Lock on and off if you are using the 10-key.

Pros: I use this board for work, play, and for school. My primary computer is an ASUS laptop, and I despise laptop keyboards so I carried this over from my last pc, which cratered. Works wonderfully for gaming, the left pad and layout is fantastic once you learn how it's mapped. Another bonus is the keyboard itself is scaled and oriented perfectly for how I sit and my hand size; the keys are backlit which is perfect because I often work with low lighting. For work applications, I use AutoCAD, Inventor, Solidworks and a few other applications. Remapping does not always work with these programs, as I will note in cons.

Cons: The ZBoard program itself is 100% incompatible with AutoCAD. Attempting to remap a profile for AutoCAD causes terrible lag and ultimately crashes the program, sometimes leading to irretrievable data. That being said, this is a GAMING keyboard, and AutoCAD allows for remapping within itself. It makes life harder when you go from station to station and you are familiar with your own mapping, hotkeys, and layout - but that's not a really big deal.

Overall Review: All around, I love this keyboard. I've spilled beverages into it ranging from coffee to milkshakes - and in quantities ranging from 8oz cups to 64oz sugar-junkie sip-cups. I've cleaned it thoroughly maybe five times, and it still functions perfectly! I've worn a few keys so badly that the they can no longer be read, but it's still going. Backlight rocks, I do like to go back and forth from violet to red; I avoid blue as it screws with my eyes. In closing, this board has brought me years of enjoyment - from WoW to LoL and SCII, I've never encountered a better board, nor have I been more attached to a piece of hardware.

Pros: I have owned two of these boards for over two years, and only replaced the first after one of my kids dumped a full soda on the thing. Anyone who FPS's with a lefty WASD has got to try this thing and you will never go back. The separate WASD area on the board with all of your favorite support buttons (e,f,c,space, etc) clustered for easy use makes this thing killer in gaming. I owned this board before steelseries bought out Merc, and I am glad to see it still around as my second board is starting to get a bit tired. This is only because of constant and consistent use.

Cons: I wish the keys were mechanical, so they would wear better. The larger WASD buttons on the left are rubberized (at least on the original Stealth version), and if you do not keep the board clean, they can get sticky from a lot of use. I'vefound using a wipe (clorox or baby) can clean them up pretty easily. It does not appear steelcase is committed to updating the software for newer games (the software is AWSOME!), and I would like to see this as many FPS's change up certain keys, although really you can map any key to any thing you want in your own set-up, it just takes more time. Also, the USB outlet on the keyboard are bogus, and I have never gotten them to work, but really, I didn't even know the thing had them when I got it, so it was never really a loss to me.

Overall Review: A recent post to this keyboard prompted my review as I cannot believe anyone would say the software does not work on Windows 7. I have been on 7 for nealry a year (back when the multi-license package came out, thanks uncle Bill!), and I had no problems updating it, or using it since. Again, I will point out I have the Stealth version disk, but have updated the software from the steelcase website without any issues. Bambam, you might want to try re-installing or something, because it definitely does work.

Pros: I really like the dedicated keys on the left. They're very comfortable and easy to reach. Everything is in it's proper location.

Cons: If you are doing anything else but play games like typing a document or just basic work, this keyboard doesn't work well. The arrow keys on the right are hard to press since they are mixed in with the numpad. Also, there are no dedicated keys for 'delete' or 'home', etc... Instead, these keys are mixed in with the numpad keys which gets annoying since you have to keep pressing num-lock to do anything.

Overall Review: Really, my only complaint is the fact that the numpad and arrow keys/dedicated home, delete, page up, page down keys are mixed in together. It makes anything but playing games difficult and annoying. Other than that, if all you're doing is playing games then this is a pretty good keyboard for the price.

Pros: I owned the orginal Zboard for 7 years, and figure its time to upgrade with the new verison of same keybaord. Love the feel of the keys, they have this rubber coating on them. Button to change the color of backlight and brightness (and off) are located on the keyboard. keys have a quick response to them. Its everything I was hoping for, just like the old Zboard but better.

Cons: load, prt scr, and save buttons on the left are dimily lighten compared to all the other keys.