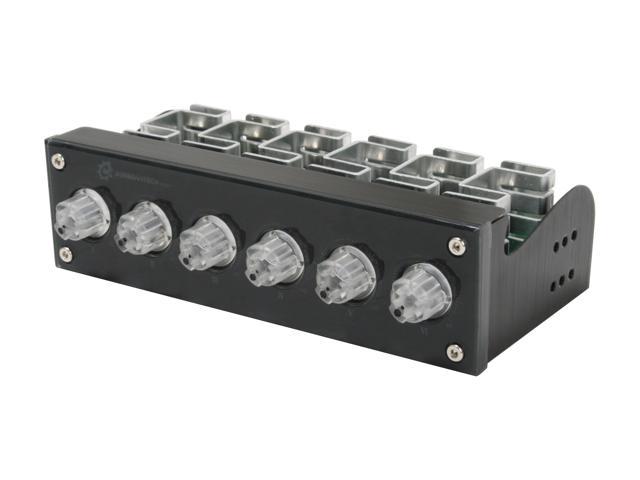 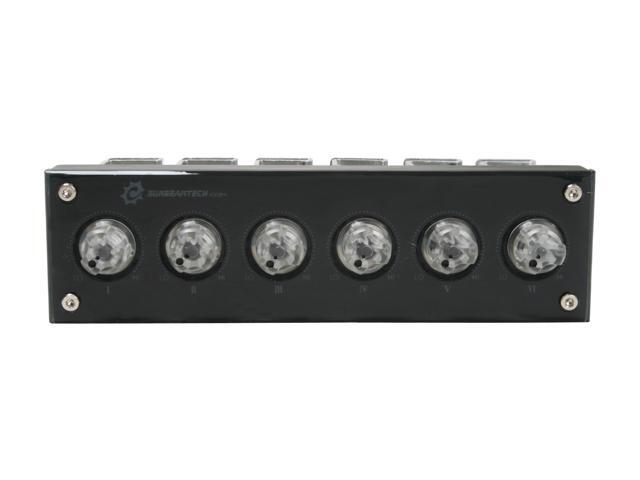 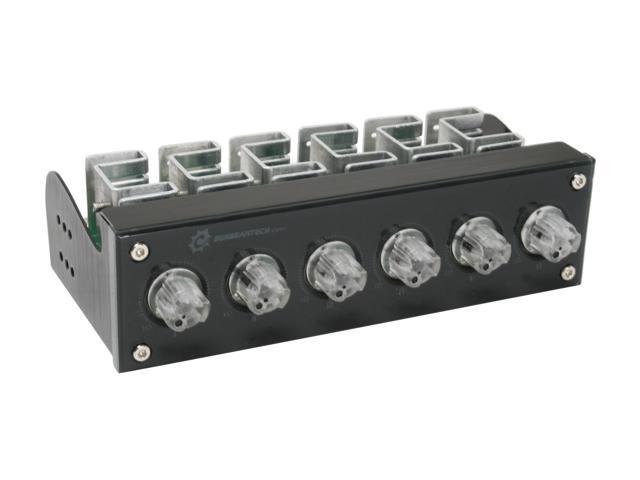 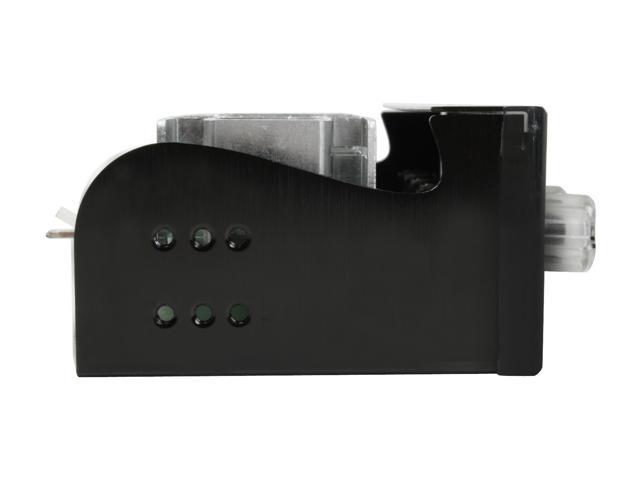 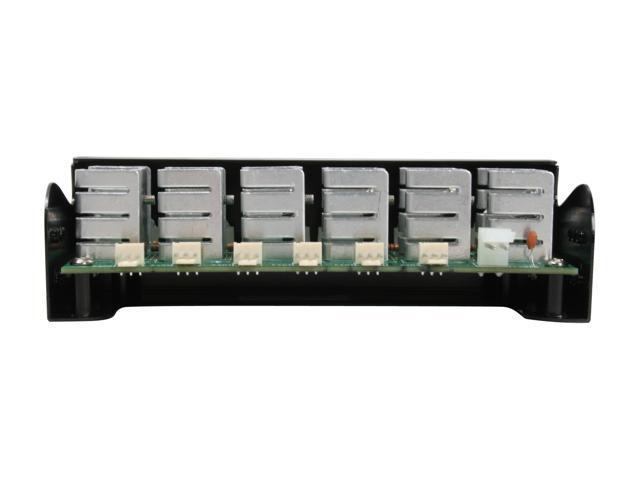 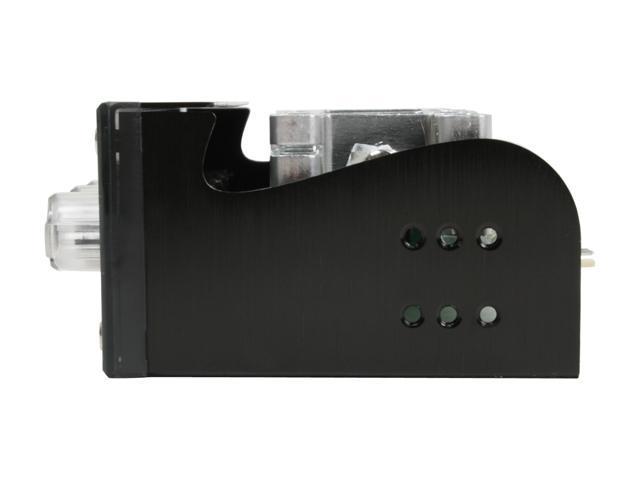 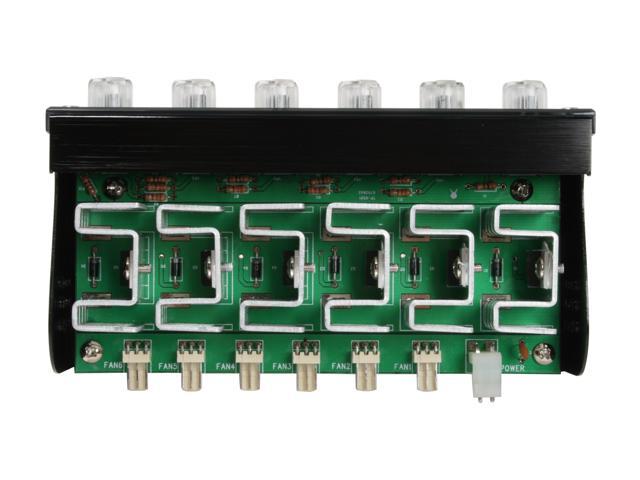 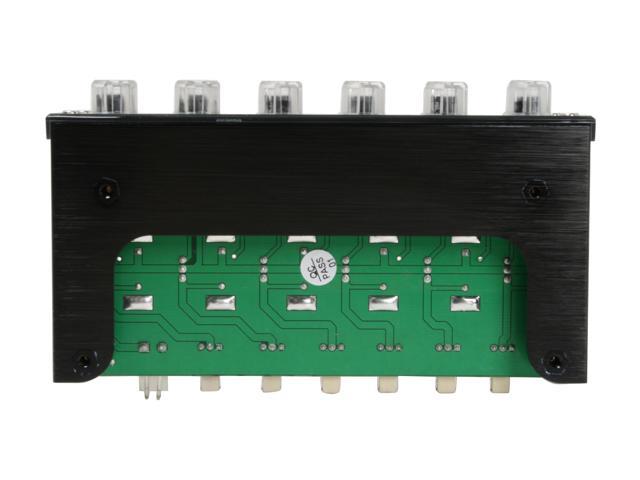 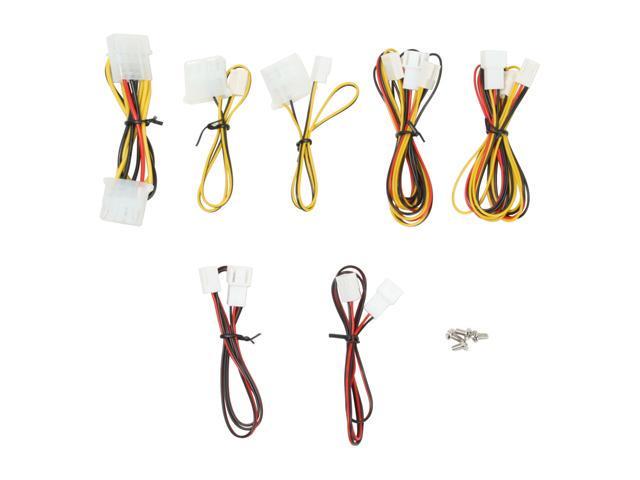 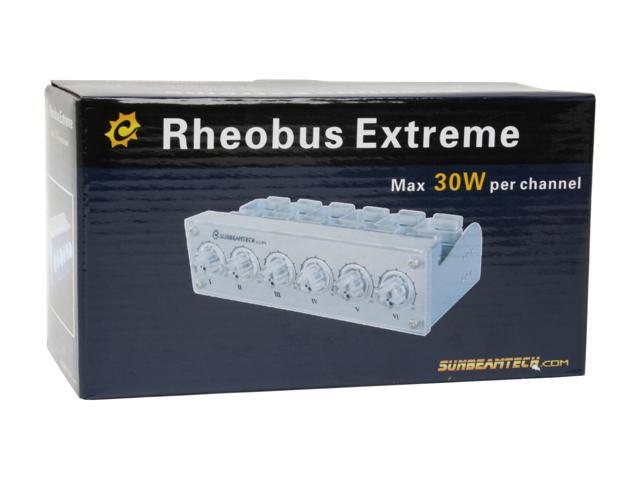 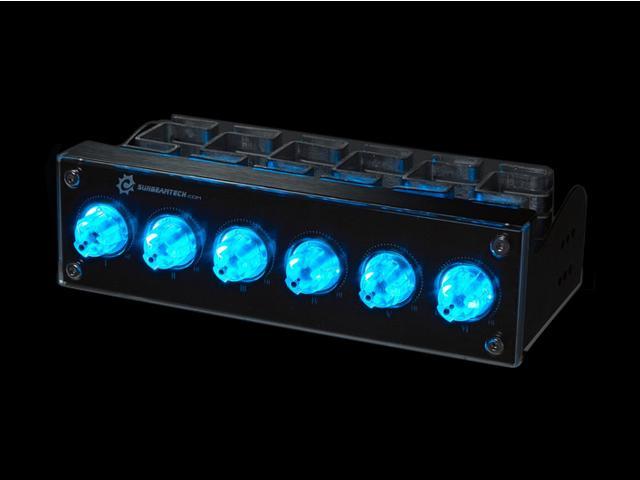 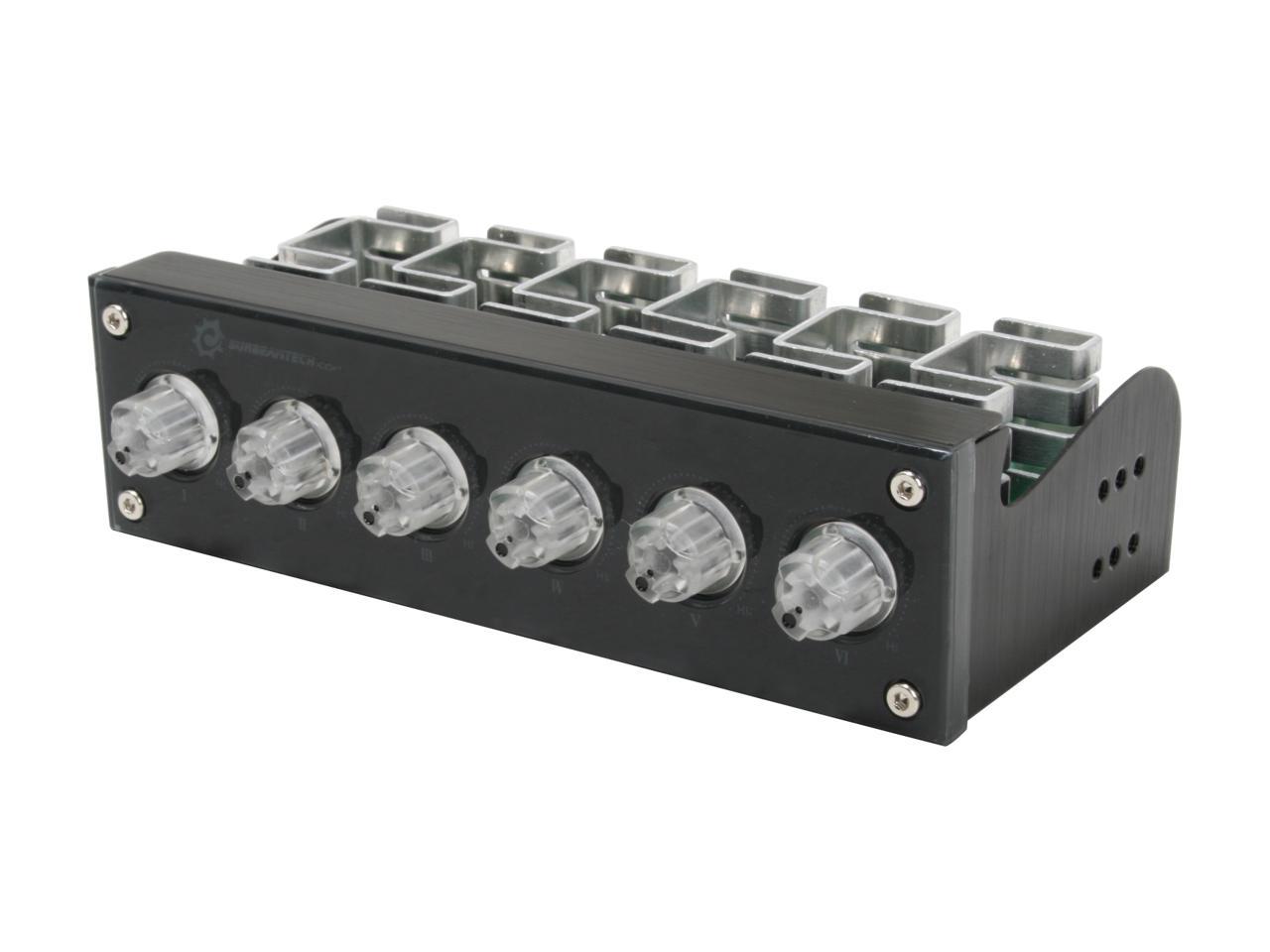 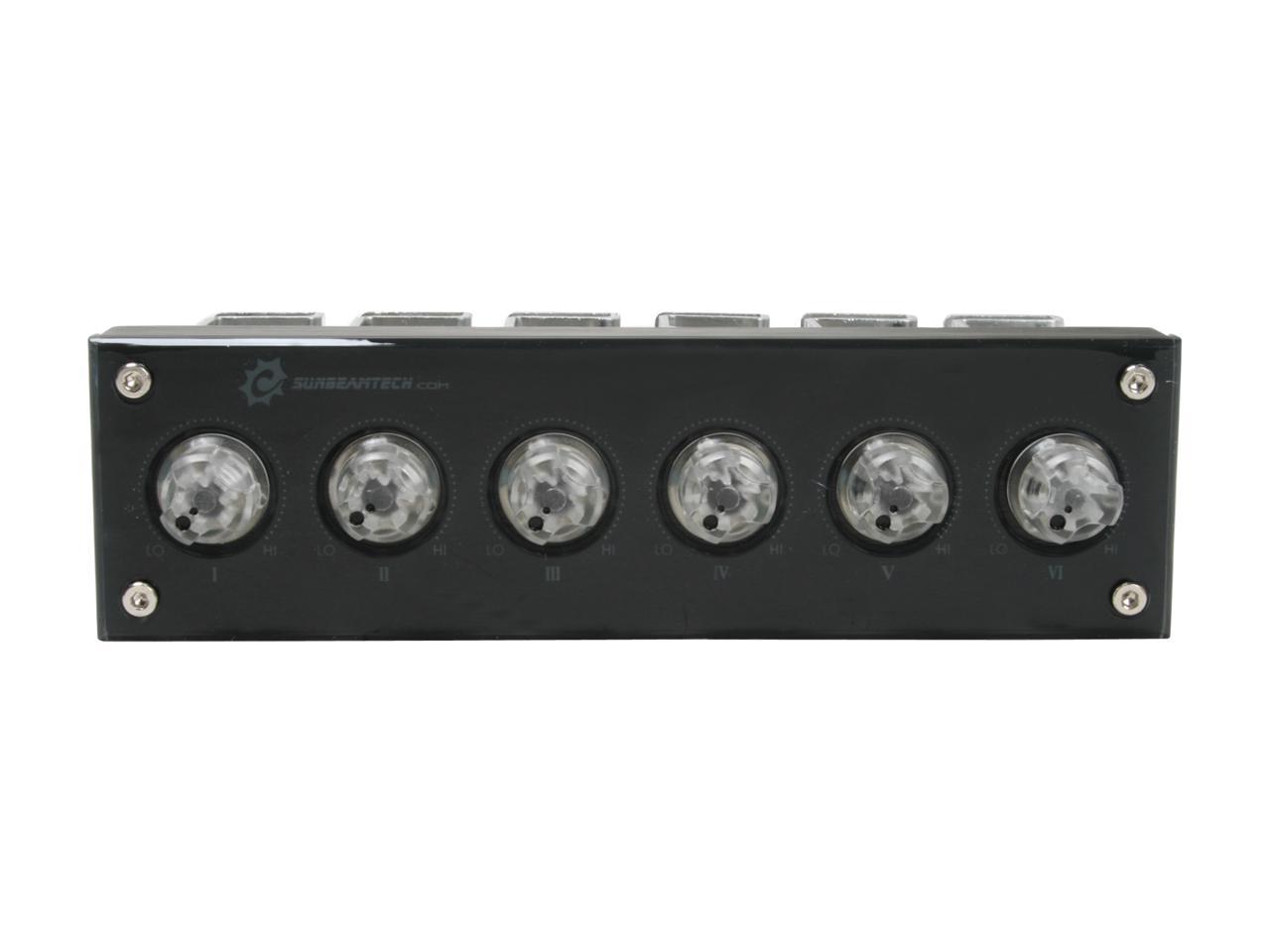 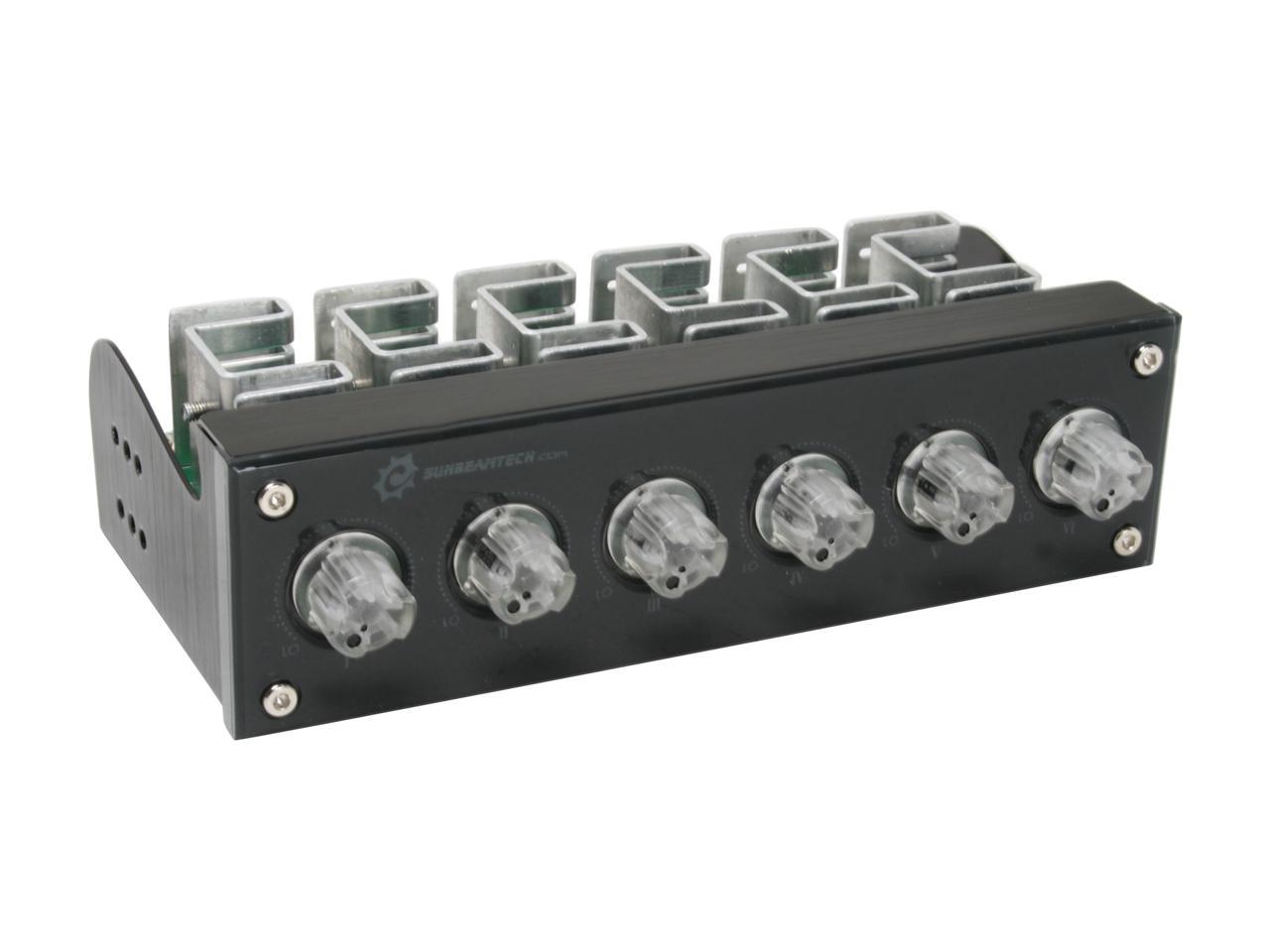 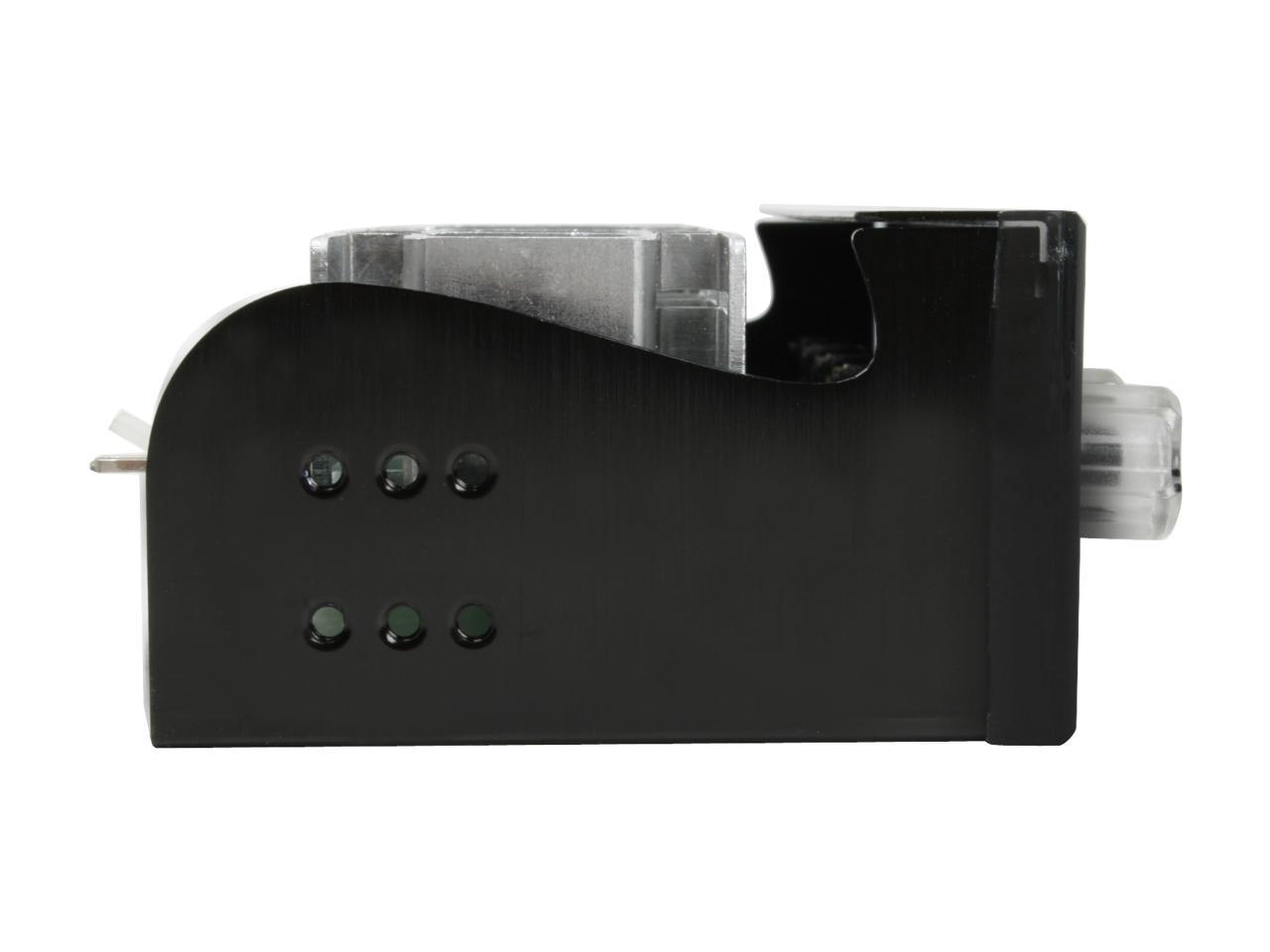 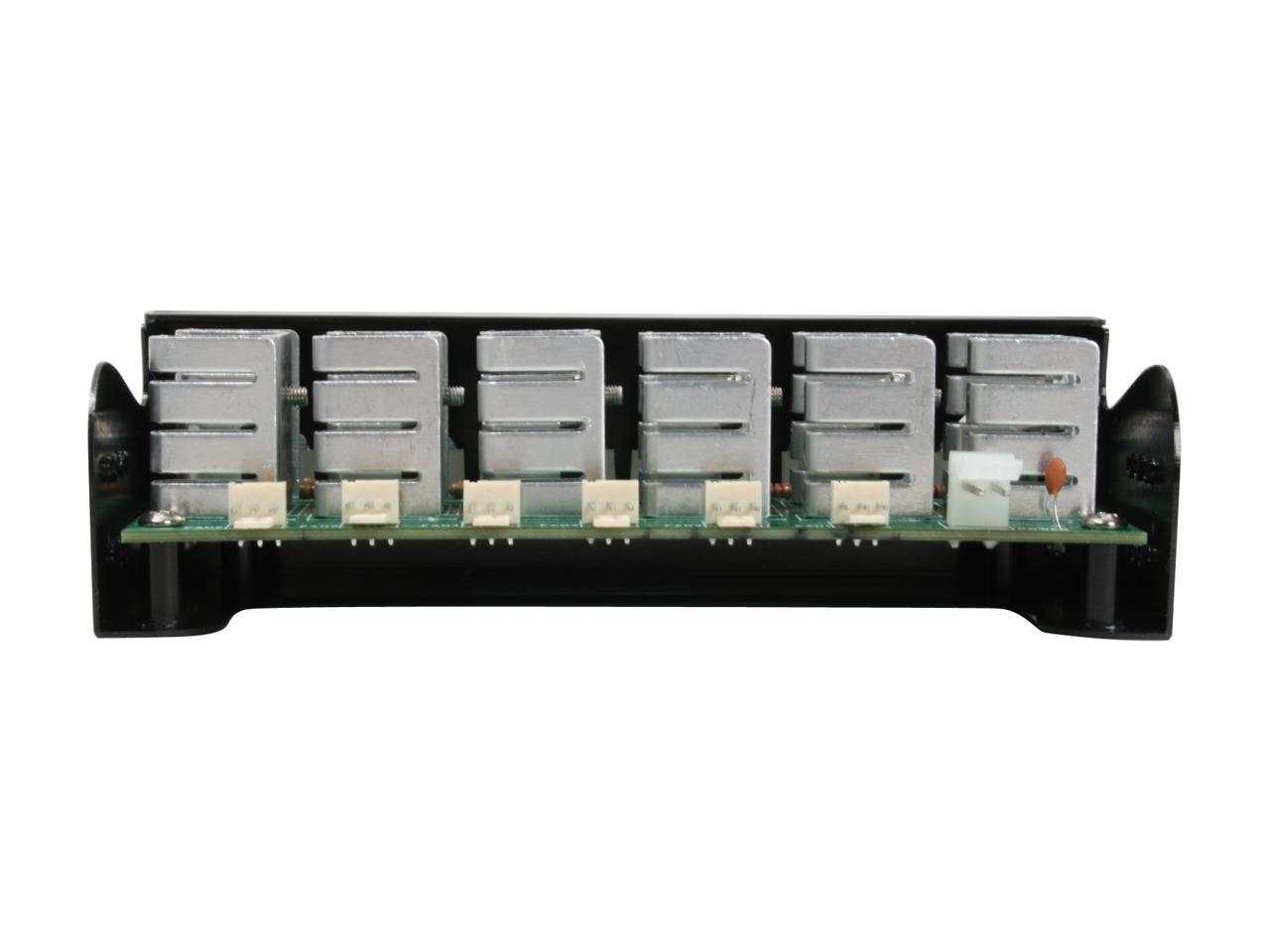 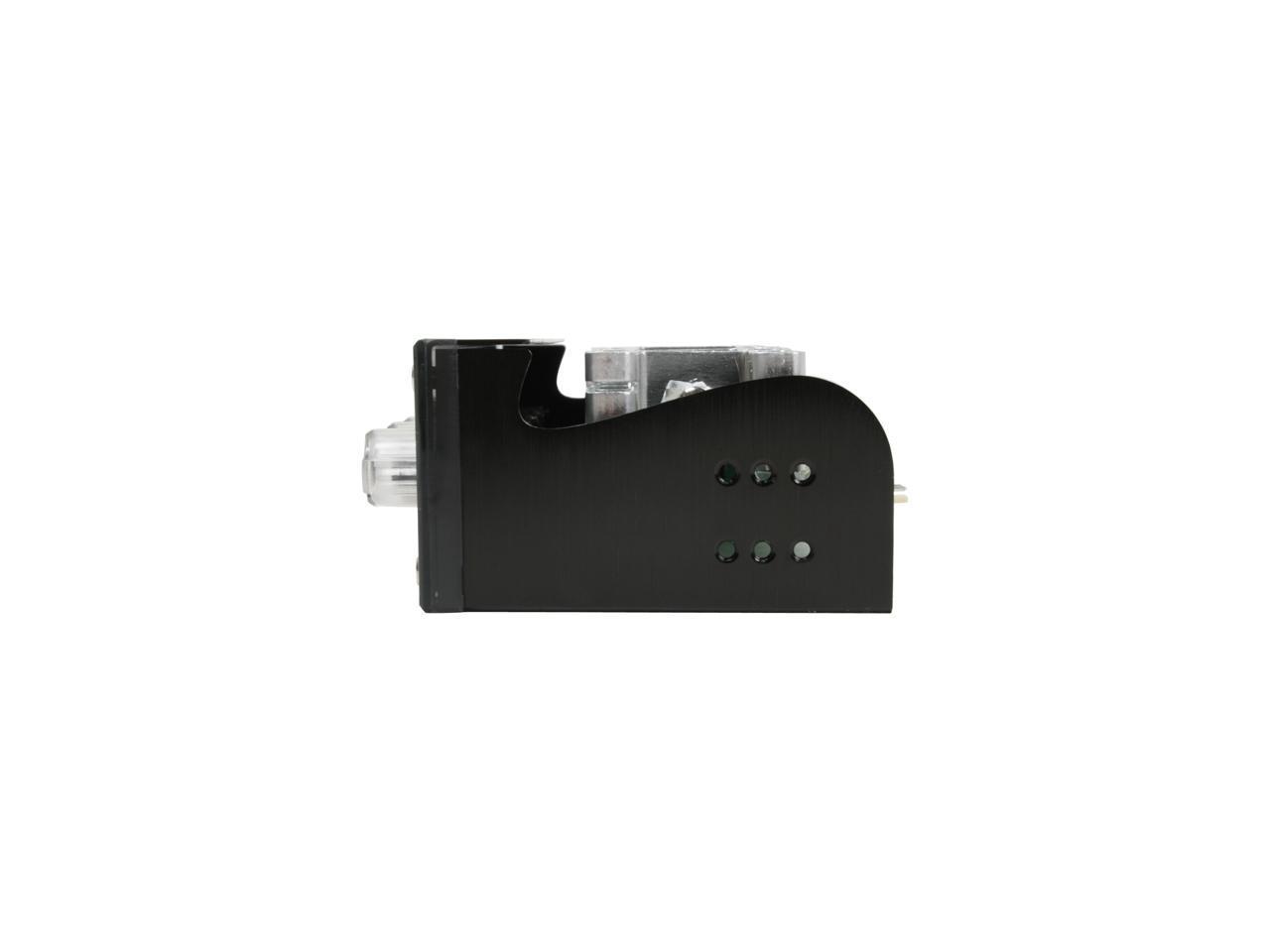 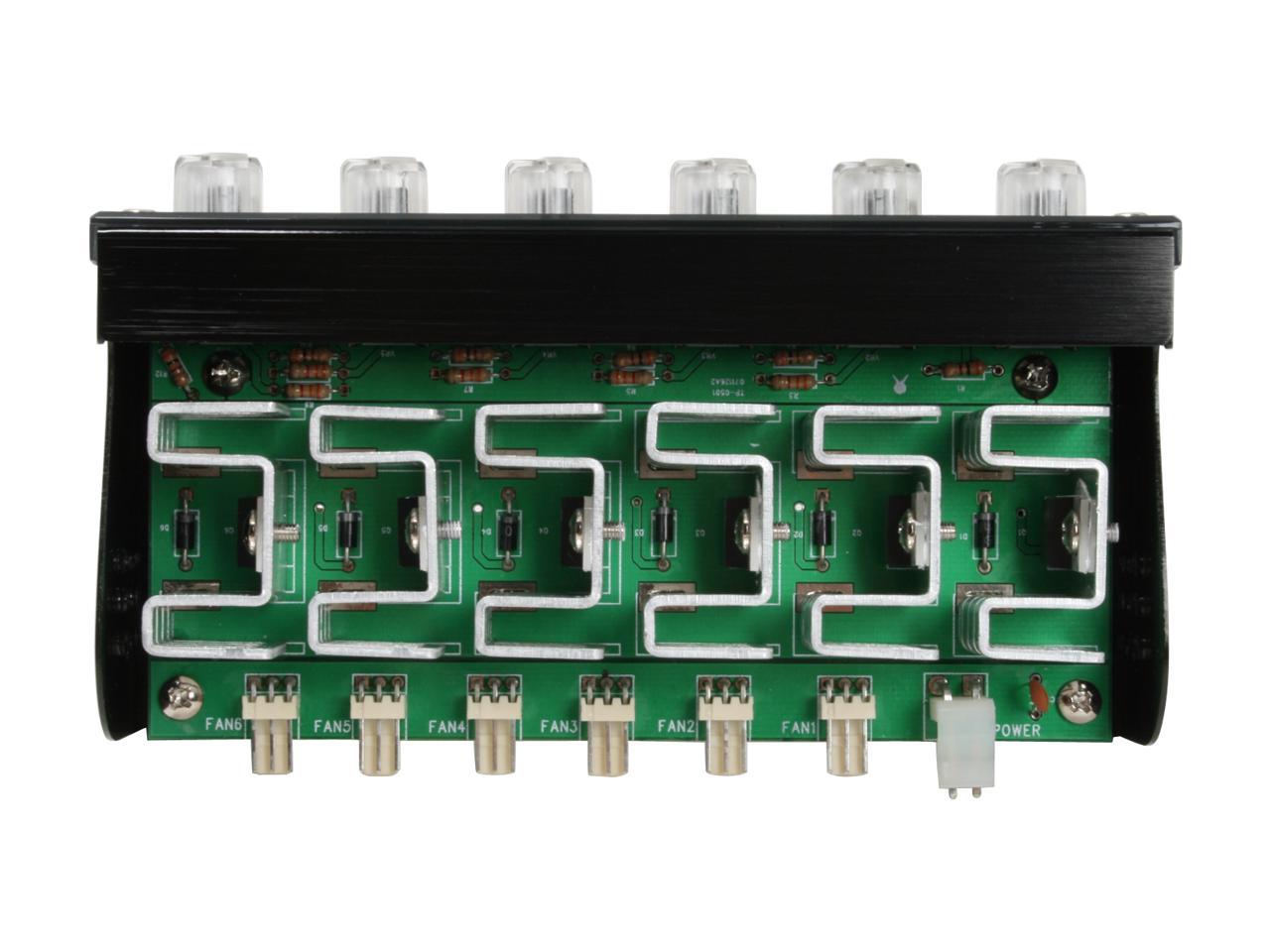 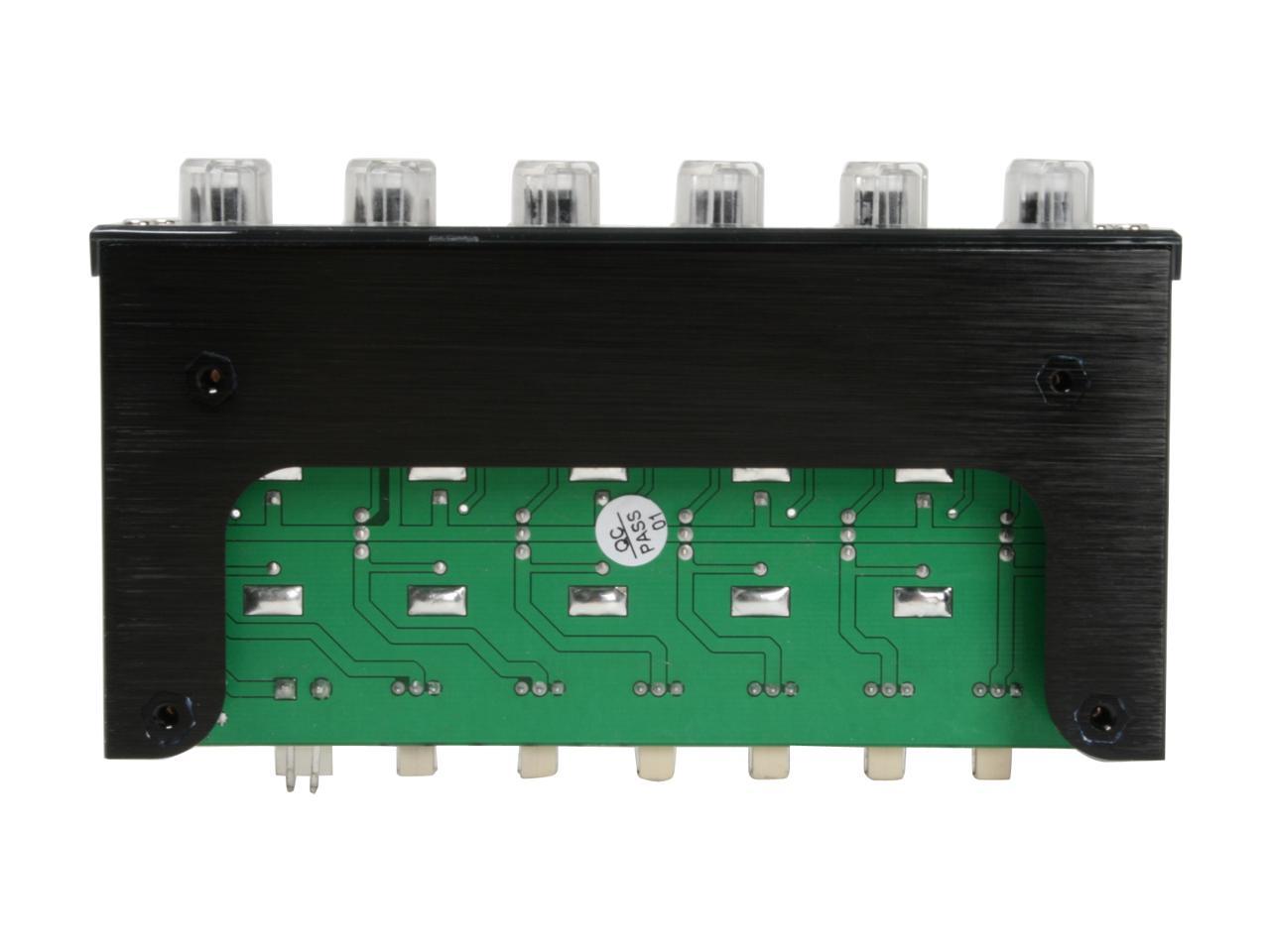 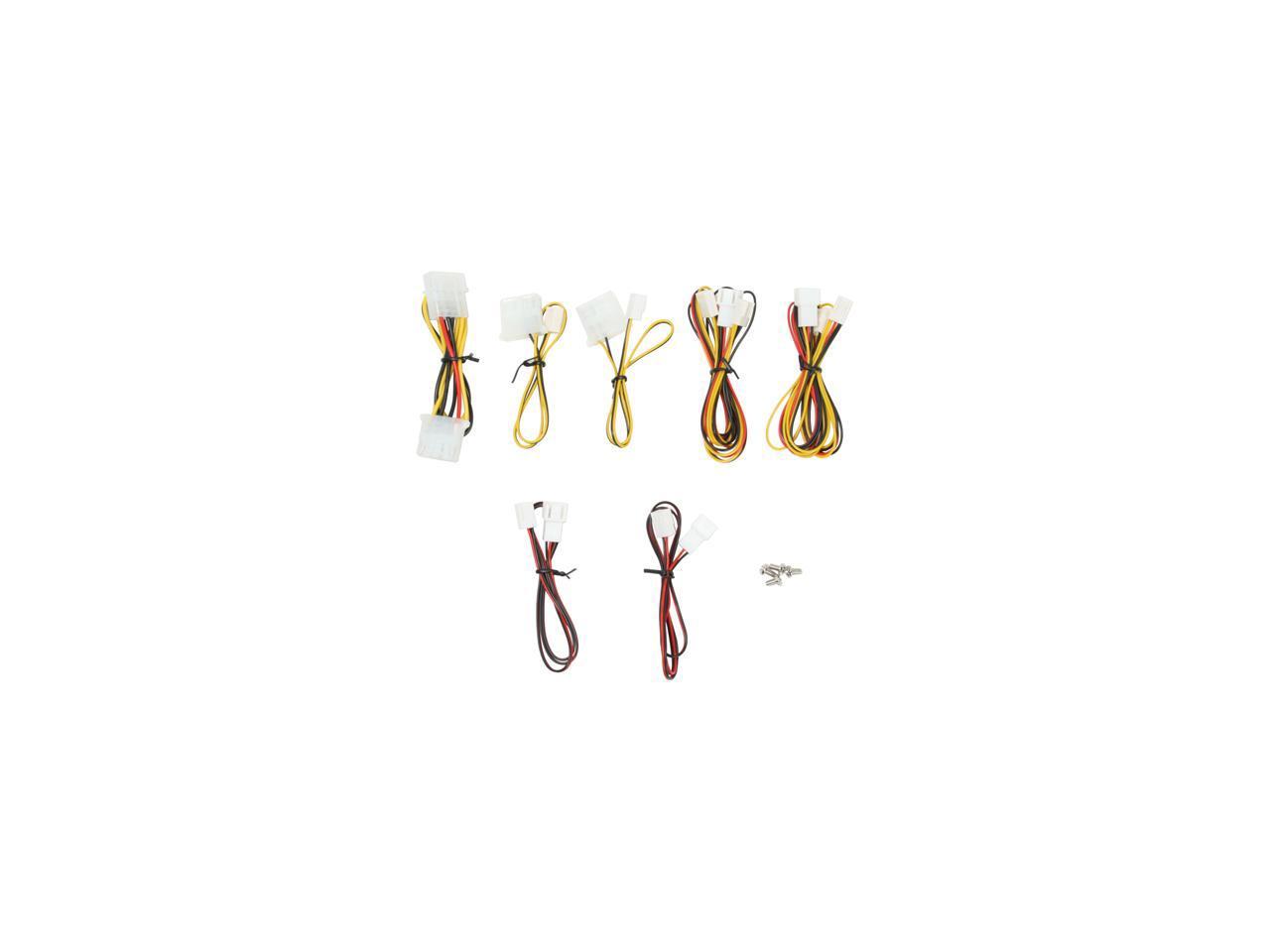 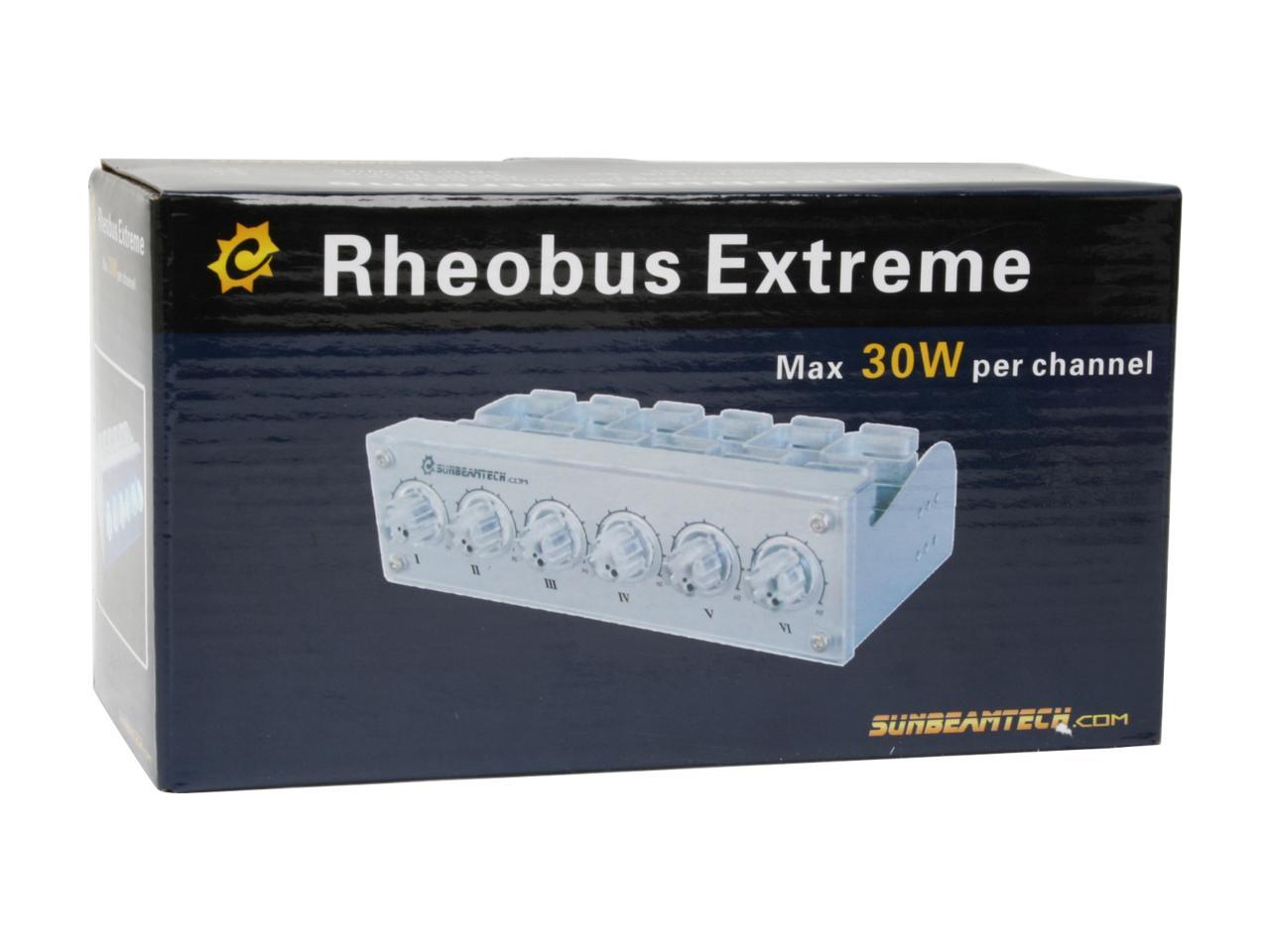 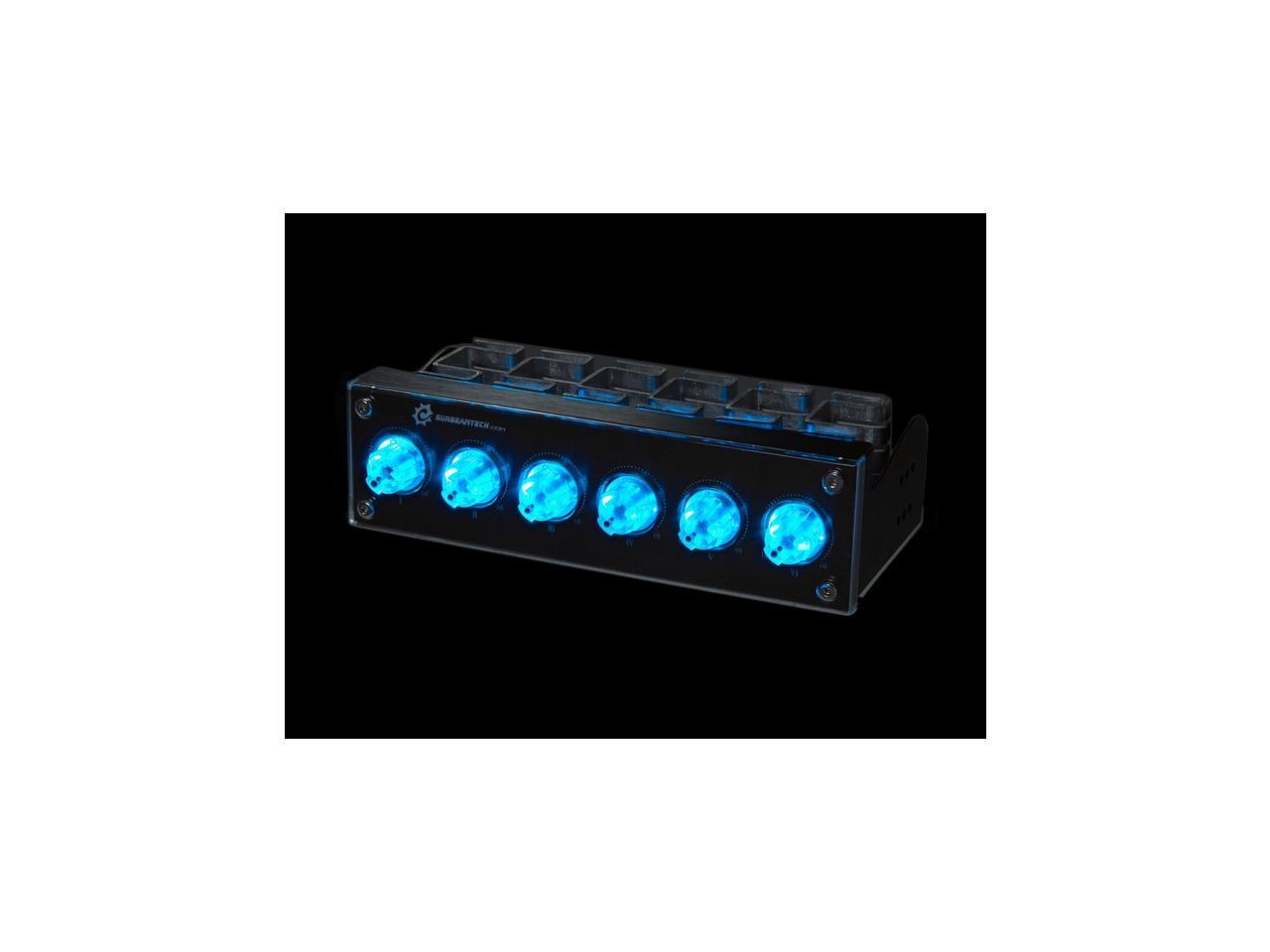 (167) Write a Review
OUT OF STOCK.
Specs
Reviews

Pros: - Nice-looking dials. - The front of the unit has a clean/glossy look to it. - Light.

Cons: - The included cables are a joke. First of all, they were cheap and ugly looking. To compare other Fan Controller companies, for instance, where they sleeve the included cables black, these cables were saddening. I guess the price matches the cables, but sleeved cables would be nice or not as ugly and cheap as they were. The headers were an ugly beige, black would be ideal. Also, the included assortment was rather senseless. Only two 3pin extenders? Since this controller has 6 channels, it was befuddling as to why they would only give two extension cables. So if you are going to purchase this, make sure your fans' cables are long enough to reach the 5.25" bay. If not, you'll be forced to buy at least four more extensions. - To speak as to how poor the included cables were, once I plugged in the fan controller into my external PSU, immediately an entire wire (one of the RPM MB 3pin cables) blew out of its sleeving, exploding and causing an electric spark. After that came the hideous smell of burning electronics. Mind you, this cable was plugged into my motherboard. I was lucky that the Mobo wasn't powered on, or else I assume it could have fried my system. The puff of smoke that accompanied the explosion nearly filled my entire case. After all of this, the entire fan controller was blown, dead, and reeking. Each time I turned it on (only 3 times thereafter) smoke just kept coming out of it. Maybe it was just a defective unit, and I got the lottery of losers, but I'm not too confident about this fan controller, guys; instead of getting a replacement, I opted for a refund because I cannot in good faith, hook this up again in my computer or anyone else's. - Unlike almost any other fan controller on the market, the Rheobus is powered by a proprietary two pin connecter. Why not just a molex? - Three of the six dials for RPM control were really stiff. The other three were loose. Taking into account this thing's build quality, I wasn't surprised by this.

Overall Review: Personally, I urge you not to buy this. There are other great fan controller companies out there. I wanted the RPM control that this could have brought, but after my experience, I gladly went back to 5v / 12v switches. Now I'm very wary of this company.

Pros: Solid construction and durable components with punishment in mind.

Cons: Bright LED's - You may have to learn how to sleep with the lights on.

Overall Review: Sunbeam is a personal preference, I've been using their control panels for 8 years. When the time came to upgrade my rig and I went with the Air Cooling method, the fans necessary were too much, literally, for just about every other controller to handle... Not this one. The Rheobus Extreme is designed to be abused, with 30Watt, 4.6Amp per channel, you can plug upwards of 6 basic fans of any size into just one channel... Or a really big fan into each. As it stands, this is one of the few controllers capable of handling the most demanding top-end fans on the market, and it does so with ease. A heads up to future buyers; many fans, regardless of type, will not turn on until about 50% power is applied because this controller is fine-tuned. So if you're turning your PC off for the day, remember to leave the necessary knobs at halfway so your next start-up doesnt result in a bad day. Afterwards, many of them may be set below 50%, though 20-30% mark seems to be the cut-off for many.

Pros: 30 watts per channel. Everything else is just gravy. 2 or more fans per channel are handled easily. I'm running: 2x Scythe Ultra Kaze's in push/pull on a Corsair H50 2x 250mm Xclio A380 case fans 1x 120mm Coolermaster case fan 1x dual 40mm RAM cooler It has lowered the overall noise of my PC by a LOT, yet allows me the airflow I need for OC'ing and gaming.

Cons: Some say that the lighted knobs on the controller are too bright, and I would agree if it weren't for the fact that my case door has a little leeway when it comes to clearance for the controller. Also, this thing can easily power multiple 3 and 4 pin fans on each channel, so why didn't Sunbeam include 3 pin Y adapters? Now I have to order them separately! For some bizarre reason, they did include (TWO!) dual 3 pin female to 4 pin male connectors...

Overall Review: This is a very capable fan controller with a tremendous wattage rating. It's worth every penny if you want flexibility in your case's power management options.

Pros: It's control 6 of the thermaltake A2018 Blue LED case fans. 3 X 120mm and 3 X 80mm. running maximum most of the time to cool the Sunbeam UFO cube and the Danger Den radiator.

Pros: 1. Reliable! It definitely worth the money I paid for it 4 years ago! 2. Maybe not on the specs, but it can turn the fan off while it is still connected to it. That is unlike other fan controllers around which can turn the speed of the fan down, but can not turn it off completely. 3. Right now it powers 1x 200mm, 4x120mm, 1x92mm fans, no problem at all!

Overall Review: I'm using this in my Antec 1200 case. Due to complicated and time consuming wiring in my case I've decided to cut and extend wires going from the rheobus to the fans by soldering some exta wire in. That solved the wiring problem, and the thing still worked. From the day of the build I did not change a thing for 4 years now. I'm still adjusting the speed of the fans time to time, but no issues whatsoever. I was actually looking for a second fan controller for my other build and I remembered about this product. I'm glad it's back in stock now! I am definitely going to buy another one!

Pros: Very small, depth-wise, and fits perfectly in a 5.25" bay, good fit. The LEDs are nice and bright and they dim as you turn down the Fan speed. They only light up if a fan is connected. If you turn the knob to the lowest setting, the LED is completely off and the fan is off too. It's good control. Comes with plenty extension cables and what not. This fan controller is good as one dial can many fans. I have control I and II controlling up to 3 fans each. So power is not a problem.

Cons: One knob started to give me issues after 1-2 months. The slightest twist to a lower setting and the fan turns off competely, and the LED shuts off too. I have to keep this knob on the highest setting to get this one to work. Kinda annoying and irritating as I don't have any real control but yah. The potentiometer for that knob is pretty broken or something :( Don't let this stop you from getting this fan controller, i might have just gotten a lemon or something.

Overall Review: I have this one fan controller controlling 9 fans. Works great and is very pretty. Highly recommend this to anyone who needs to control their fans. Can really help improve airflow and/or make the fans more quiet.

Pros: This is the first fan speed controller I have ever owned, and it works like a charm. I only have 2 fans that need to be hooked up to it, and it takes them from their max of 5000 RPM's to around 500 rpms. Slower than 500 they shut off, but that is no biggy, always run faster than 500 anyways. These two fans are right under the wattage limit per channel of the controller too. Real great for when I am not in gaming mode.

Cons: Not one con. All the knobs and lights work as they should.

Overall Review: Once again I am amazed by some of the reviews. It really must be operator error, because I am still at 0 defective computer parts across the 7 systems I have built. I plugged it in and everything up to it and it worked. Try not to treat your PC parts poorly, maybe that will help.

Pros: I control 2 fans per port with this no problem. I have 8 120mm fans plugged into 4 of these ports, 1 for 1 on the other 2 ports. Fantastic! Easy to see and easy to tell the position of the nobs.

Cons: I removed the clear plastic piece in the front because it looked cheap to me. Looks more "professional" to me now: but that's just looks and opinion not really a con.