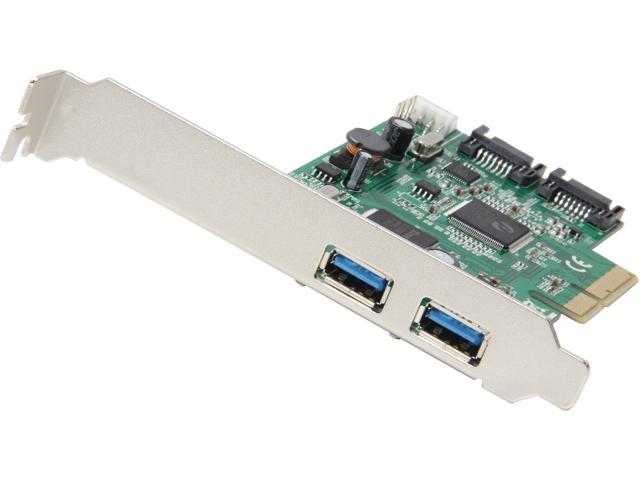 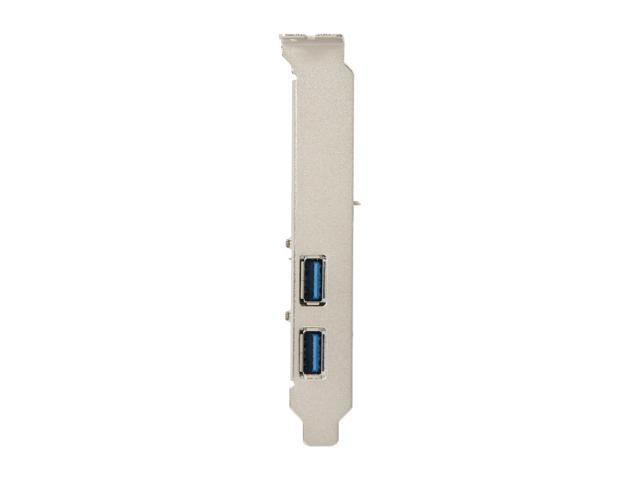 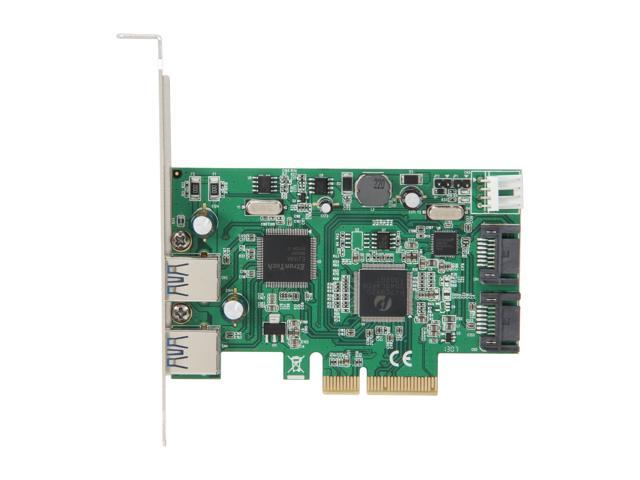 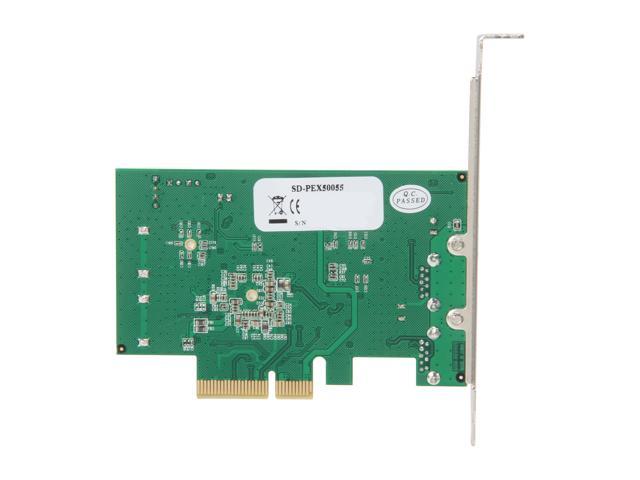 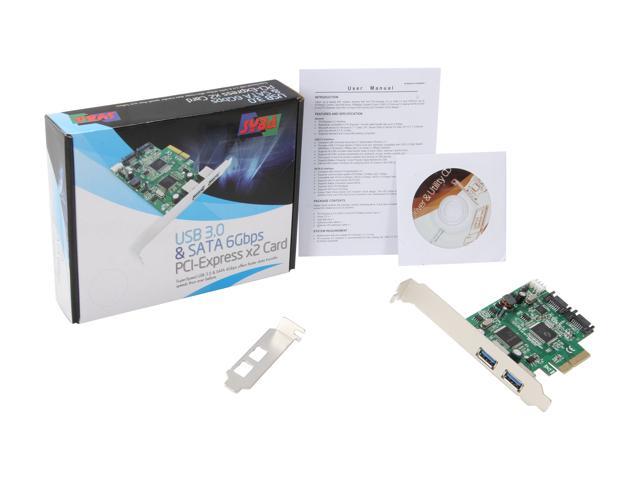 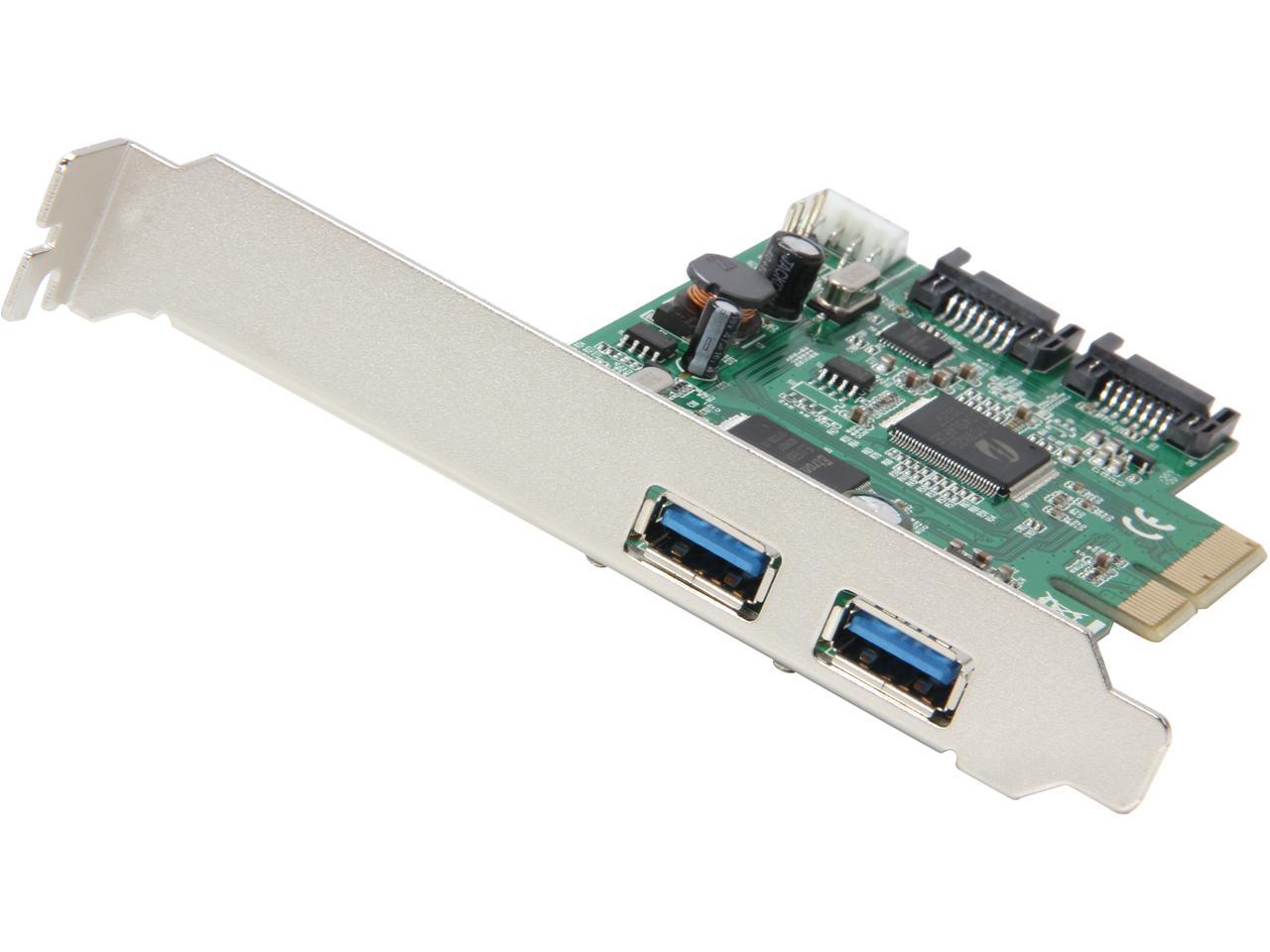 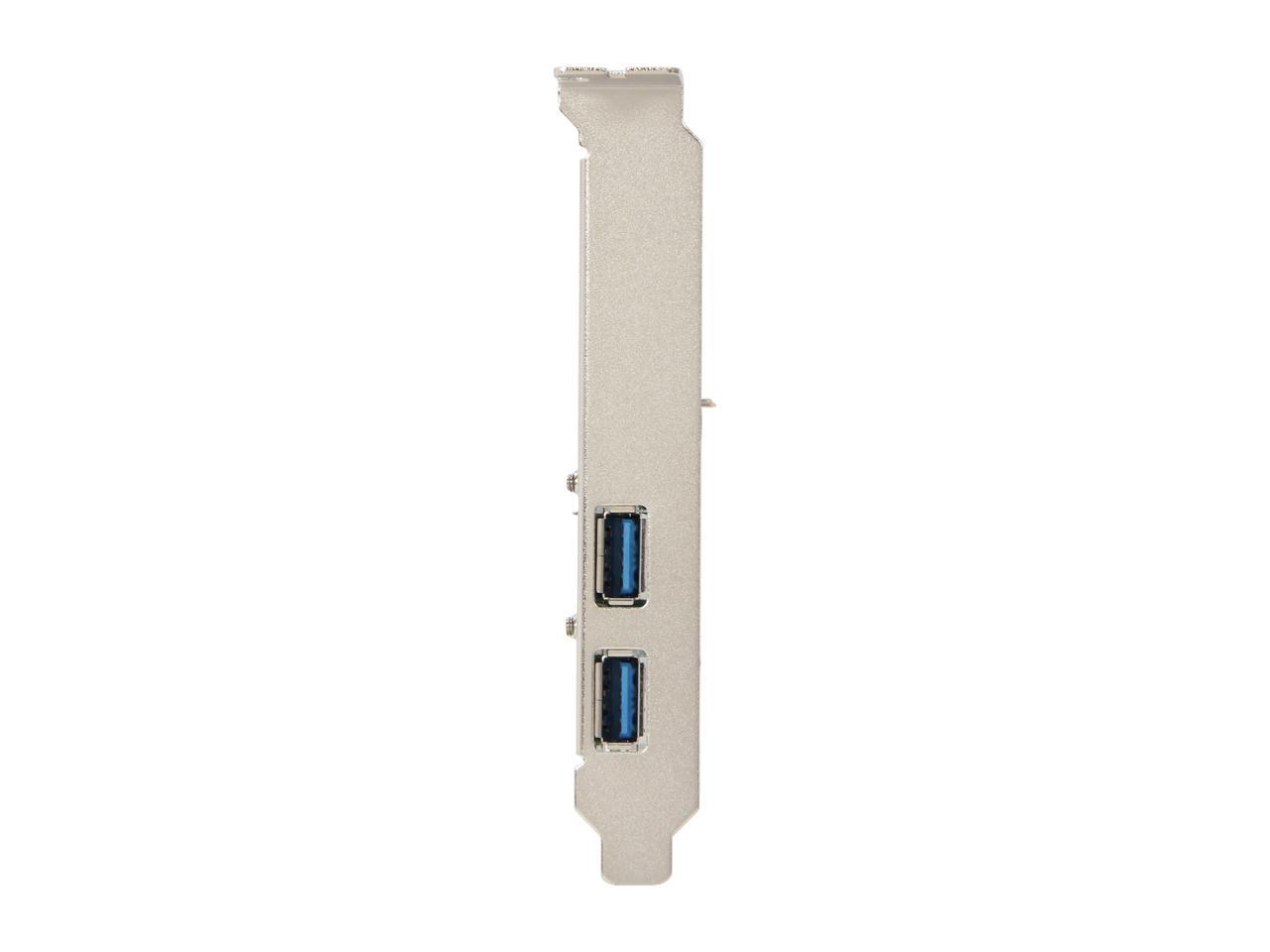 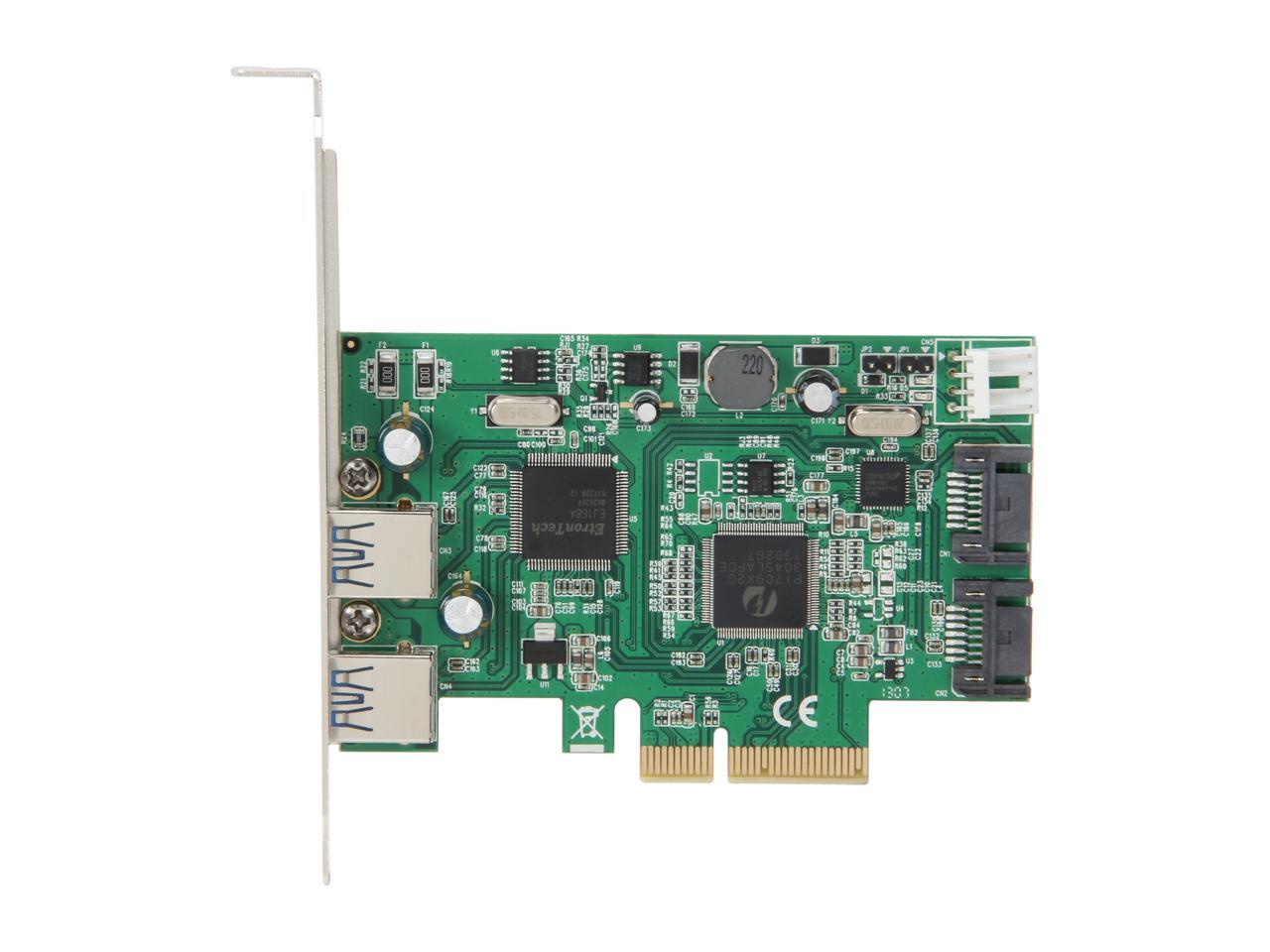 (47) Write a Review
See more "usb controller"
In stock.
Ships from United States.
Overview
Specs
Reviews
Catch up to speed with modern devices with this PCI-Express 2.0 to USB 3.0 and SATA III Combo Card (up to 6Gbps = 550mbps transfer speeds). Has both Etron EJ168A and ASMedia ASM1061 chipset. Designed with 2 USB 3.0 Ports and 2 internal SATA III ports in one PCI-Express card with a Unique HDD activity LED indicator circuit design!

Learn more about the Syba SD-PEX50055

Pros: See Other Thoughts below.

Cons: none at the price.

Overall Review: USB 3.0 ports must be able to supply some power to whatever device you plug into them, hence the need to connect a power lead from your power supply (the PCI-e slot can't supply enough power for the SATA ports plus the USB ports.) Regarding the PCI-e x2 vs. x4 : This is a very frequent misunderstanding based on the fact that THERE ARE NO X2 SLOTS on motherboards. There are only x1 and x4 slots (and x8 and x16 slots for really big stuff). So, if you have a card with 2 "lanes" of bandwidth (x2) it plugs into an x4 slot on your motherboard. So, why don't they just go ahead and include extra lanes of bandwidth to make it a "true" x4 card? It's because the chip on the card would have at least 4 times as many connections and pins, and it would be more expensive to manufacture. Just look at the prices for controller cards that have 8 or more ports with full bandwidth - no $40 bargain cards there!

Pros: 2 in 1, I have a server with a mini ITX MOBO. The board doesn't have USB3.0 and only has 4 SATA ports, so I was looking for a way to gain at least two more SATA ports and have the ability to use USB3.0. This card to the rescue. I was very leery about the SYBA brand, I've never purchased one before. But its great, it installed quick, the drivers worked the first time with no issues. Windows 7 32-bit. Both the USB and SATA work great.

Cons: the only thing I didn't like about this card was the physical sata connections. They are flimsy and don't have an actual socket, so if you have locking sata cables they will not help you at all. Not a big deal, the cables aren't going to get up and walk off, but SYBA should consider spending another $0.10 and provide better connectors. It would make this card the jam.

Pros: I can't vouch for Windows support on this product, but I can tell you that in Xpenology or Vmware ESXI it works great and is natively supported. Getting the max read / write speeds posted using a 4x slot on my motherboard. Also getting the posted / advertised speeds for USB 3.0 file transfer rates.

Cons: card requires a 4 pin adapter for power. Card does not include this adapter or adapter to molex Had to spend another few dollars for a SATA to Molex Y adapter to power this card correctly. Card will not run / operate correctly if you do NOT power the card (seems obvious but people seem to ignore this fact)

Overall Review: As stated previously it is natively supported in Linux / VM Ware ESXi. I'm running this card in an HP N54L that is powered by the Xpenology project. I'm able to utilize the 5 internal SATA / SAS + ESATA ports, plus this card. THis gives me a total of 6 plus 2x usb 3.0 for external hard drive backups. Again, solid card. I've been running it for 5+ months with no issues. Just make sure you POWER the card correctly with floppy / molex adapter.

Pros: -Inexpensive for TWO SATA III ports AND two USB 3.0 ports. -Increased my SSD's WEI rating from 7.2 to 7.7 -Easy to set up and you can even connect your boot drive to it.

Overall Review: This doesn't come packaged with the "optional" molex-to-floppy power connector but you probably don't need it unless you are going to be using 2 or more of the ports at once (I am using all of them.). The box for this card says it's a PCIe v2.0 2x card, but it is actually a PCIe v2.0 4x. Also I recommend getting the latest drivers from SYBA's website instead of using the CD that comes with it.

Pros: No problems with the SATA III functionality. USB3 is working well after installing the 1.0.0.118 driver.

Cons: Latest driver for the USB3 controller is not on Syba's website, and the card's USB3 functionality is unreliable without it.

Overall Review: Like many other reviewers, I've had some trouble using the USB 3.0 ports on this card, running with the latest driver available on Syba's website (1.0.0.115). However, the USB controller's creator, Etron Technologies, has a more recent driver (1.0.0.118) at their own site. Since installing the latest driver from Etron, the USB3 functionality has been much more reliable. If you're having trouble, head over to http://www.etron.com/en/products/u3hc_detial.php?Product_ID=1 and give it a try.

Cons: - Spent half a day trying to solve the INACCESSIBLE_BOOT_DEVICE error. Tried re-imaging the System from System Image backup, tried fixing MBR, BCD, bootsector, etc. (Not sure if it had any effect, probably none). Then connected the drive back into my Sata 2 port, and installed the SYBA drivers from drivers-download website as SYBA suggests in the manual, connected the drive back to the card and it booted!!! When I first connected the card, window installed some old generic SATA drivers from 2006. - Boot times are like 5 seconds slower because the PCIe card needs to initialize (but afterward you really see the different in speed).

Overall Review: - Haven't the USB, since I don't have the floppy power cable. Update: put in the Sata to Floppy adapter and tried out the USB. On one brand of USB drive I got 80/75 speed, on another I got 40/35 (USB 2speed), then installed the software that was on that drive and I got 105/105! So the speed is good, but I've noticed that I getting KERNEL_DATA_INPAGE_ERROR if the PC goes to sleep on its own. Update: KERNEL_DATA_INPAGE_ERROR(Sometimes from KBDCLASS.SYS), CRITICAL_PROCESS_DIED (sometimes from VOLMGRX.SYS, CDROM.SYS) , DRIVER_POWER_STATE_ERROR persist even with the newest drivers directly from Asmedia (driver version 3.1.9.0). There's some driver incompatibility and it has to do with the sleep stages and power. Disabling the S3 sleep, and leaving just the S1, solves the issues, but then it uses more power and the fans are always running. The S3 works most of the time, and it seems to work better if I put the PC to sleep as opposed to the system doing it automatically. In fact, I have disabled sleep on the computer and created a Windows Task to put the PC to sleep-- for some reason it works best but not 100%. Really weird PC gremlins. Another Update: Using hibernation instead of sleep resolves all errors. Really strange, as hibernation is usually frowned upon, but it seems to work flawlessly. So type "powercfg -h on" in the command prompt and you're done.

Overall Review: I installed this card in an open slot on my MSI X58M motherboard. (As a precaution I first downloaded and installed the latest drivers from the SYBA website.) I powered up the machine, and everything worked fine. Note that this card provides 2 internal SATA ports in addition to the external USB3 ports. The card requires both a SATA driver and a USB3 driver. I then plugged in a Western Digital Passport USB3 hard drive. This drive previously managed about 25 MB/s transfer across a USB2 port to an internal SATA drive. With this new card, the same drive managed 65-70 MB/s transfer rate. Also, the cable I used was a special longer (6 foot) cable from CiTi to go from the USB port on the machine to the special Western Digital port on the drive. The card had no problems delivering USB3 speeds, even over the longer cable.

Pros: A great solution for upgrading older motherboards. After installing latest drivers from SYBA website, both USB 3.0 and SATA III work flawlessly. I used this SYBA board with an older Intel i5-650 CPU and Asus LGA-1156 motherboard.

Cons: Driver disk included is littered with many drivers for other boards SYBA makes. The fine print in the manual included with the board mentions the two type of chips used on the board. That information allows selection of the correct drivers to install from the mini-CD. A much better solution is to go to the SYBA web site, search for the product type, and download the identified drivers.

Overall Review: I used this to allow use of SATA 6.Gig interface with a new Intel SSD. I was getting disk corruption and CHKDSK scan requests on bootup. Loading the latest drivers for the SYBA board solved that problem. Will boot straight from BIOS with no special considerations. Highly recommend installing new SYBA drivers as soon as possible after loading the OS.