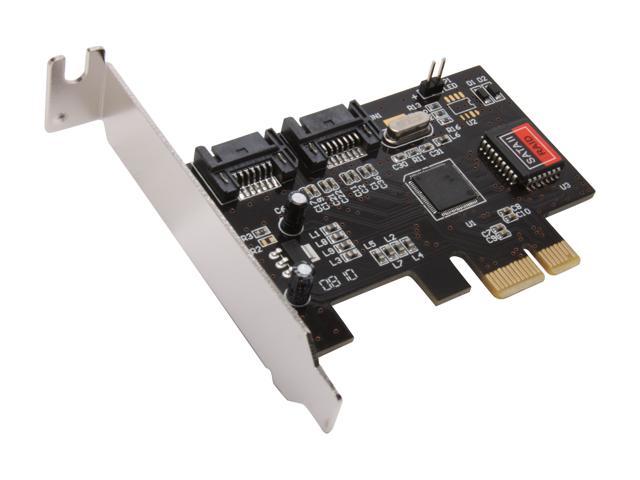 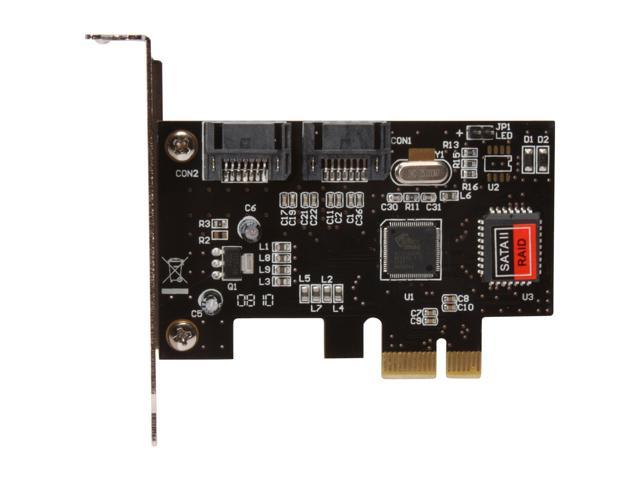 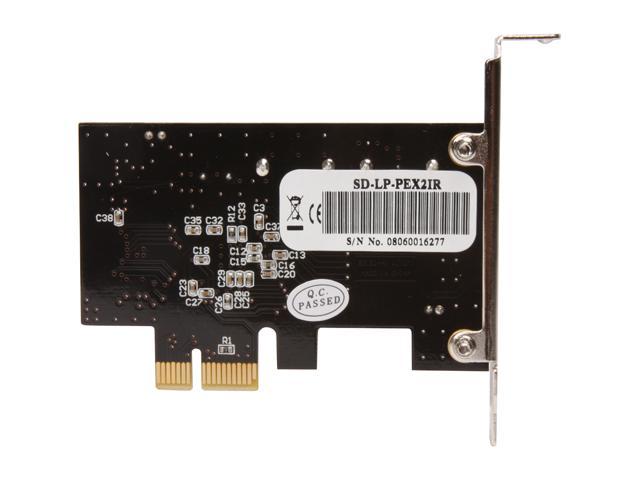 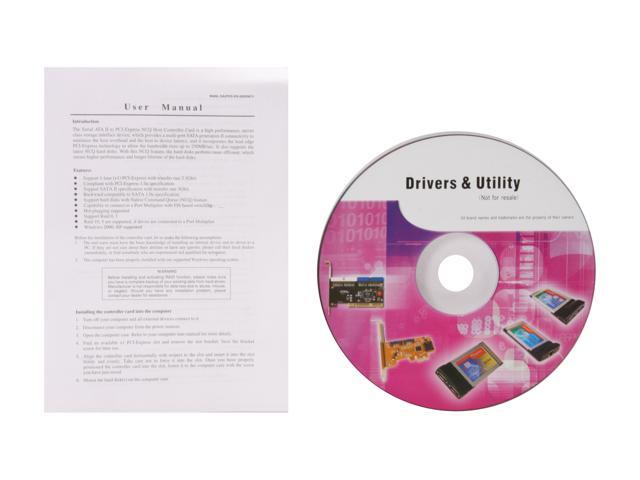 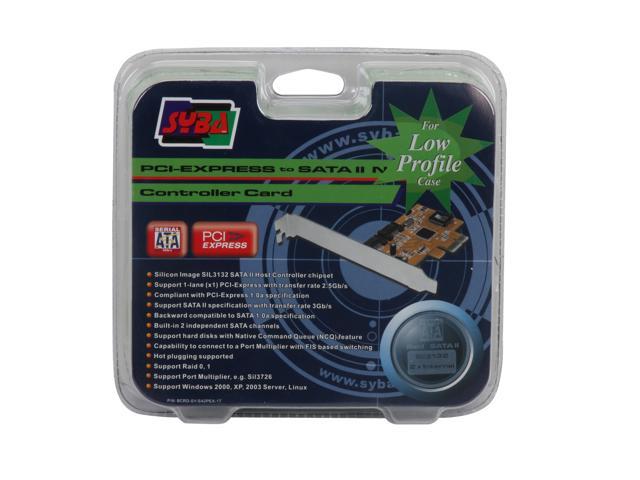 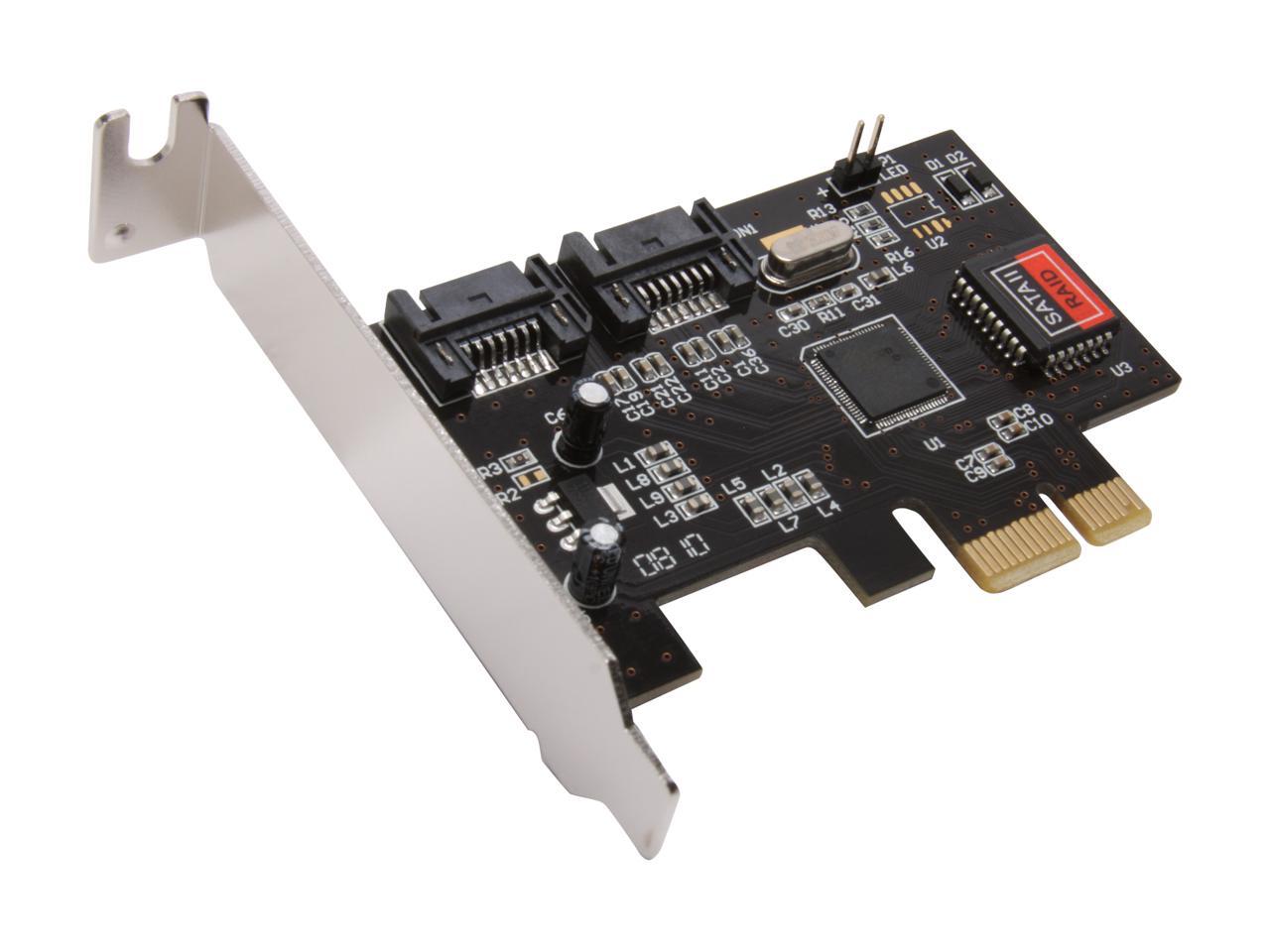 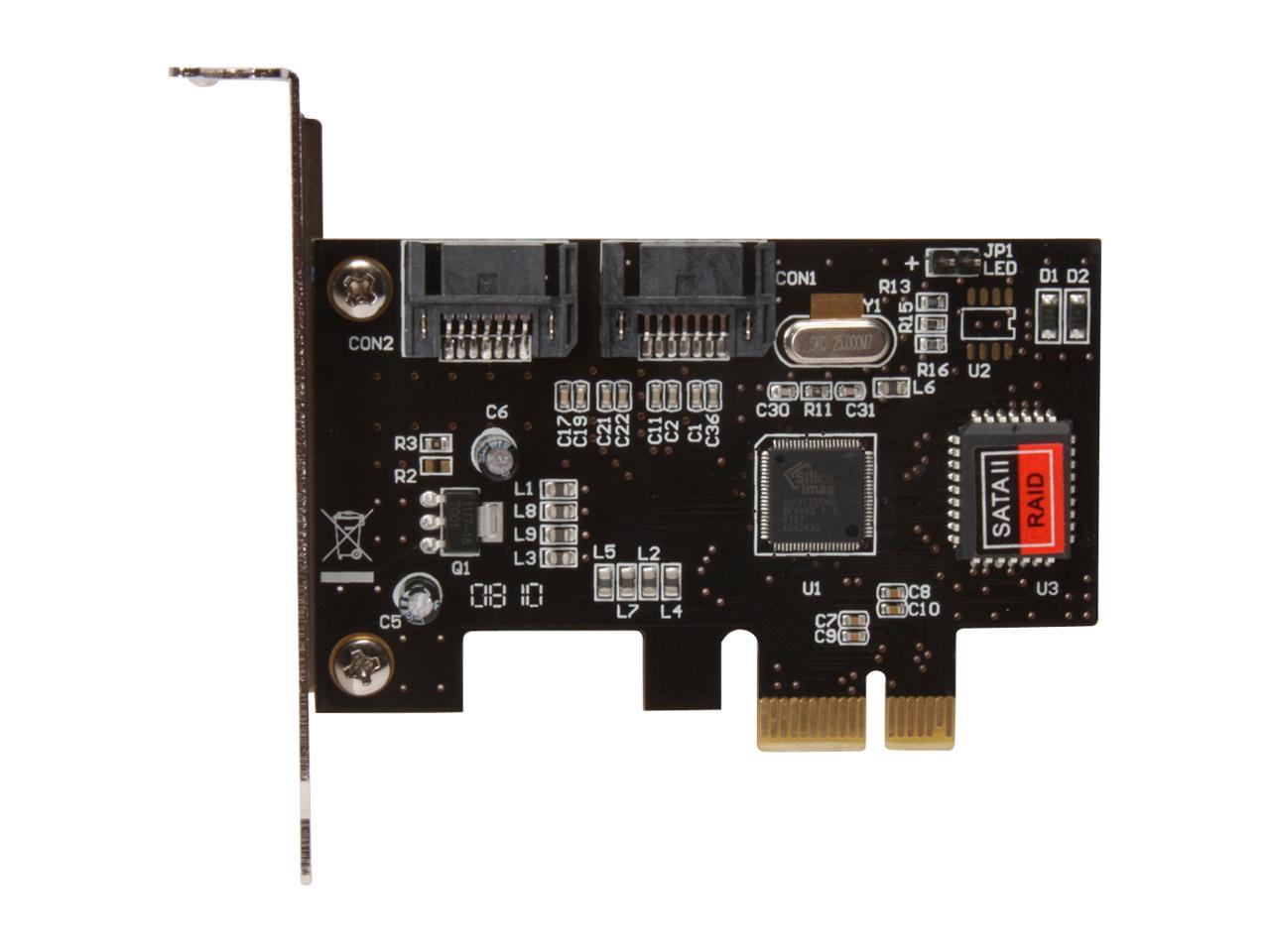 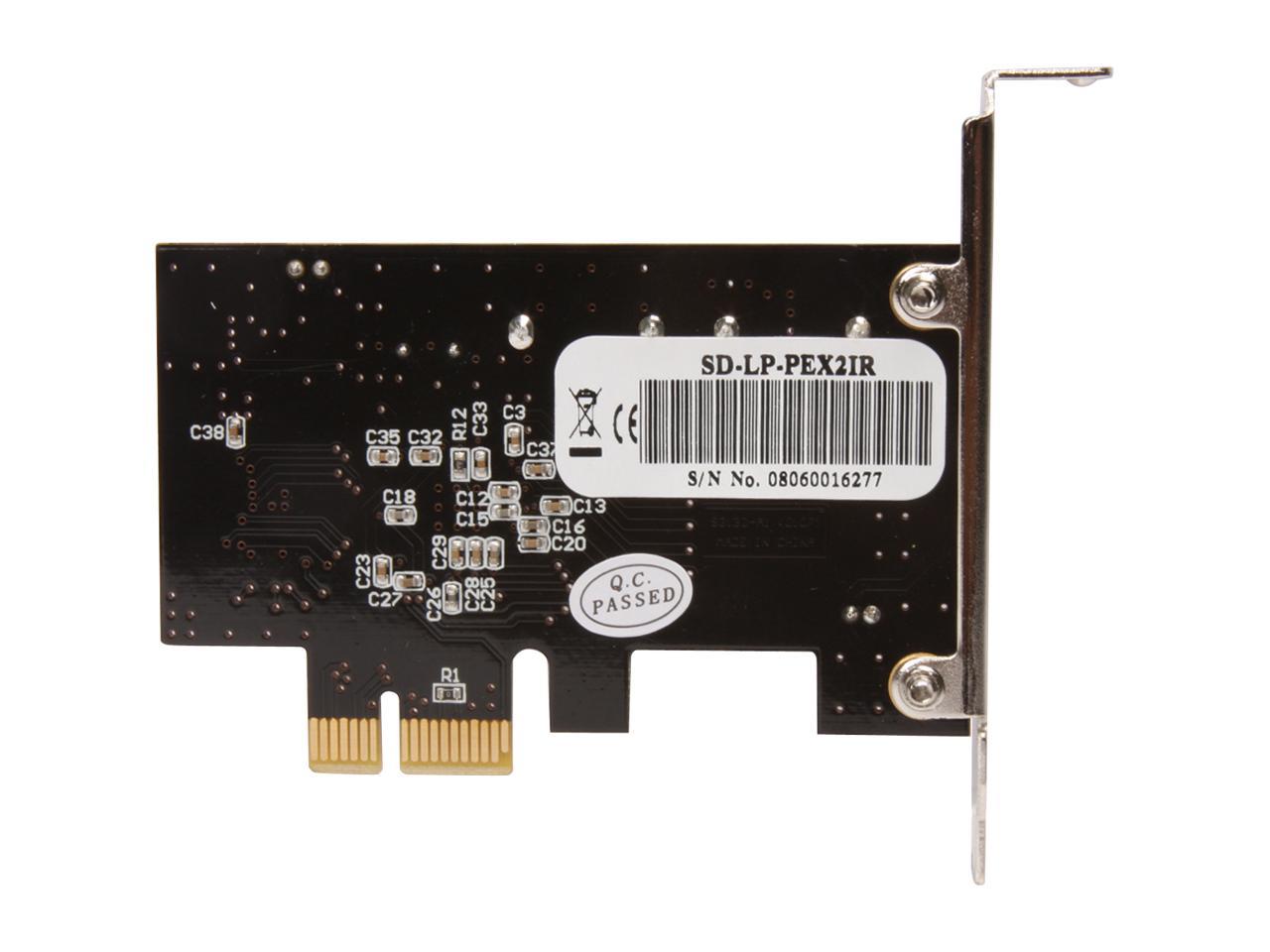 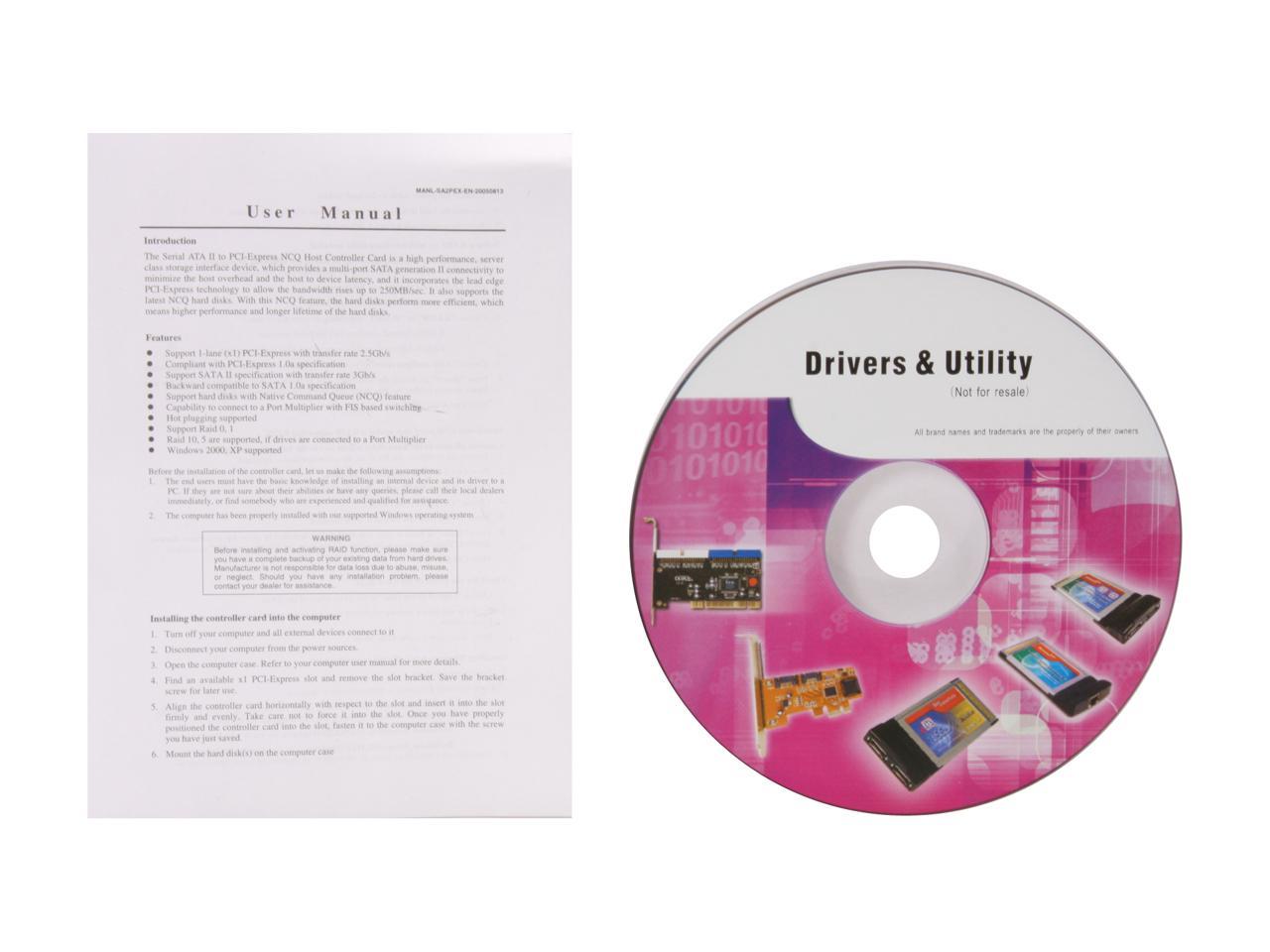 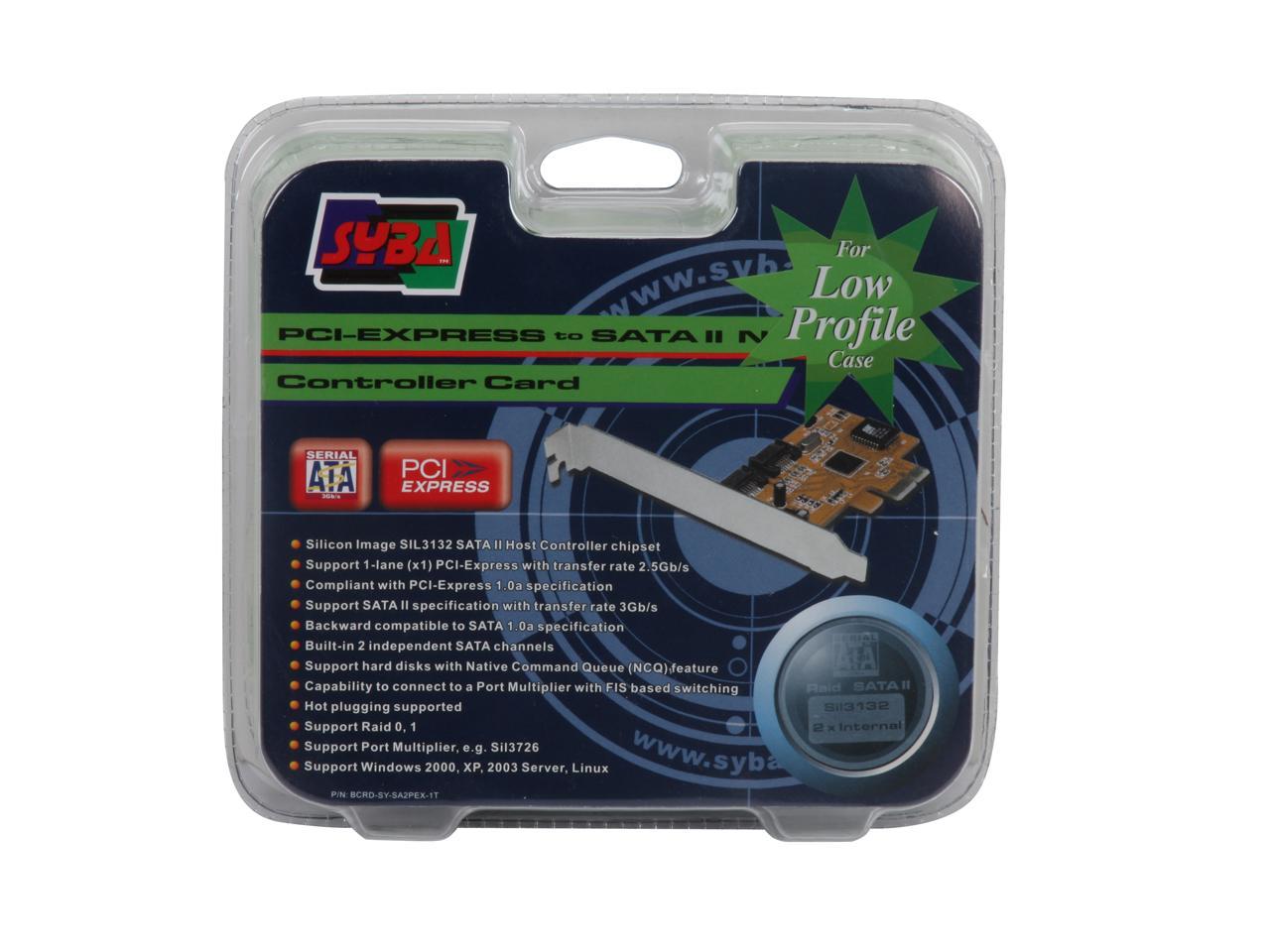 Learn more about the Syba SD-LP-PEX2IR

Pros: Cheap and works, Bought monday 2 pm, delivered tuesday 11 am. (newegg should have a warehouse around the corner) can be used in normal cases (just remove the bracket) Slicon image have a new bios update in their website which lets you update the bios within windows. However you need to use command line to flash the bios. See my instructions below.

Cons: In order to flash bios within windows download flash utility: http://www.siliconimage.com/docs/SiFlashTool.zip download the non-raid bios: http://www.siliconimage.com/docs/SiI3132_7702.zip put them in same folder, run cmd, go to folder with the files. type siflashtool /v and see your product info. use below format to flash utility where xx & yy should be read from the command we typed above SiFlashTool /BusNum:xx /DevNum:yy /File:b7702 /v

Overall Review: Hope this helps, took me an hour to figure out. since device has its own bios, you time until post bios will be 2 seconds longer than normal. if you are obsessed with boot time, avoid this product.

Pros: Less expensive than the full height version (SD-SA2PEX-2IR) but it's the exact same card. Works with Windows XP and Ubuntu 8.04.

Cons: Has an older BIOS that needs to be updated in order to boot a single drive.

Overall Review: In order to get my hard drive to boot I needed to flash the bios (version 7.4.05) available from silicon images website and use the recommended driver (version 1.5.18.0) for that bios. Otherwise, if you do not need to boot off of the card, the stock bios and driver will work with Windows XP (I have Windows XP Pro SP3) and Ubuntu doesn't need any drivers as they come built into the kernel. If you have a different back plate that fits you can buy this card and save some money, I used one off of an old ethernet card.

Pros: Quick shipping from Newegg. Very intuitive setup. Install the card in your PC, turn on the power, and it is readily recognized. Load in the correct driver according to the model number on the controller card and you are in business. This "low profile" card currently selling for 18 bones her on Newegg is IDENTICAL to the Regular Profile card selling here on Newegg for almost TWICE the price! I purchased this low profile card, unscrewed the backplane riser from the card and installed it in my PC. Not an issue for me! I saved about 16 bones over buying the same card with the full size backplace spacer. (SYBA SD-SA2PEX-2IR) --> Full Size @ 34 bones! I've heard that if you call SYBA customer service that they might swap out the backplane riser for the full sized version. I opted not to trouble myself with doing that... It is working fine right now and I am a very happy camper with its performance.

Cons: The only drawback that I've seen or had with this incredible controller card is the boot up time seems a bit slower. This is due to the system now recognizes the RAID 0 controller card setup upon booting up and seems to pause for a second or two during the boot process. The last time I set up a RAID 0 was using the motherboard's options. So, looking back I wish I had just incorporated a RAID 0 using the motherboard...?

Overall Review: I purchased this card a couple of months ago and placed it on a shelf for later use. At that time I had two Seagate 500gb drives that were acting up due to the firmware issue. Not wanting to test the waters in rough seas I put this installation on hold. I purchased two WD 1TB drives and wanted to install them in a RAID 0 configuration. So, after yanking out the questionable Seagate's, I installed the two WD drives using this controller card. Piece of cake to install. Not one issue. You WILL need to know the model number of the controller card as you sift through the driver CD. Yes, the CD is chock full of SYBA's controller card drivers...so, having the box next to you will be a good idea! Anyhow, this really is an easy install. Probably easier than setting up a RAID using the motherboard's chipset. However, there is a slight delay in booting up as it has to access the controller card first, then the hard drives to read Windows. After that, it does speed along rather well.

Cons: Ships ONLY with the low-profile bracket, as others have mentioned. The ports on this card do not have anything for newer SATA cables to "clamp" onto. Can use JBOD without installing alternate BIOS, but there will be an error message that no RAID volume is detected.

Overall Review: Contacted Syba support for the full-height brackets, and after filling out a simple form, I received them within a few days at no charge! The newer SATA cables with the clamps DO work fine on this card, just make sure you get ones that fit snugly, as they won't actually clamp. I've added three of these to fill up the PCI-e 1x slots on my motherboard. The initialization screens for these cards pass within moments on my system (even with three cards installed), and as I rarely reboot, it's not much of an issue. If you're looking for extremely fast startup times, however, you may want to look elsewhere.

Cons: -Only 2 ports -The Bios GUI is really lacking and I feel sorry for anyone who uses two 2 TB hard drives and only wants to raid the first tb, you get to scroll from 2000gb to 1000gb VERY SLOWLY. -Instructions are lacking on all ends (Syba, Silicon and Microsoft) -Had to bend metal to fit in case (which is because this is low profile) -Longer boot up time (which could be fixed possible with firmware updates if they felt like it more than likely)

Overall Review: I found this info on the net after trying to find out what Microsoft Error 0x80300001 was.... 1. Load the RAID driver from CD. (Vista driver will work) 2. Install the driver and create partitions. 3. Remove the driver CD and insert the Windows 7 DVD. 4. Click on Refresh and the error should disappear.

Overall Review: Once I downloaded drivers from Silicon Image and got the darn thing working, it's just fine (so far). SYBA did send me the longer bracket, but save yourself the headache. Just order the SD-SA2PEX-2IR (http://www.newegg.com/Product/Product.aspx?Item=N82E16815124027&Tpk=sd-sa2pex-2ir) card for five bucks more.

Pros: Recognized RHEL 5, RHEL 6 and multiple Fedora Linux distros with no issues. The card came with the low profile bracket attached (and no full height bracket) which was great. Inexpensively priced.

Cons: PCB is the full height of the low profile bracket and the SATA ports are along the top. This means that if you are using this card in a 2U you will HAVE to use the 90 degree angled SATA cables.

Cons: I specifically purchased this card because it did not take up the full height of a 2U bracket and had enough clearance to plug a SATA cable into the [poorly placed] top connectors. The card pictured is ~1.5" tall and appears to allow enough clearance for a low profile SATA cable in a 2U case (card is about 2/3rds the height of the bracket). The card I received is 2.5" tall and does not allow any clearance to plug in a cable. Comparing the card received to the card in the picture, I see that they are different cards with the same model number.

2 out of 2 people found this review helpful. Did you?
Manufacturer Response:
Dear Customer, Thank you for purchasing our Syba products. We are sorry to hear that the product has stopped functioning as it should be. Please refer to the reviews on this product. We have good reviews for this product. I would like to point out that we can also issue RMA returns. We always try to provide the most reliable products to our customers and all products come with at least 3-year warranty. So please don't hesitate to contact us at support@sybausa.com for replacement or question. Regards, Syba Customer Service KN 030211