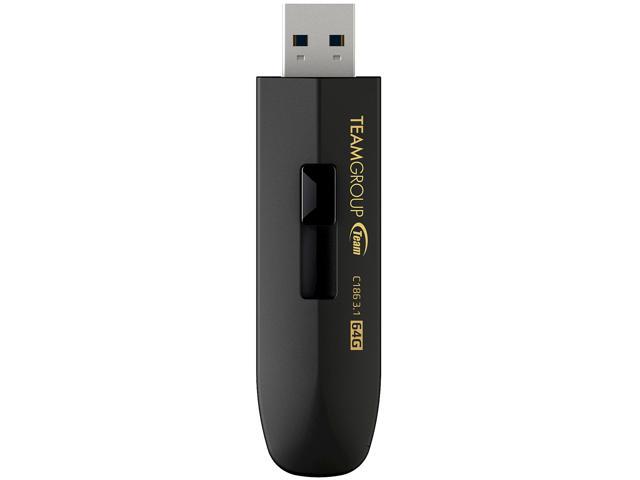 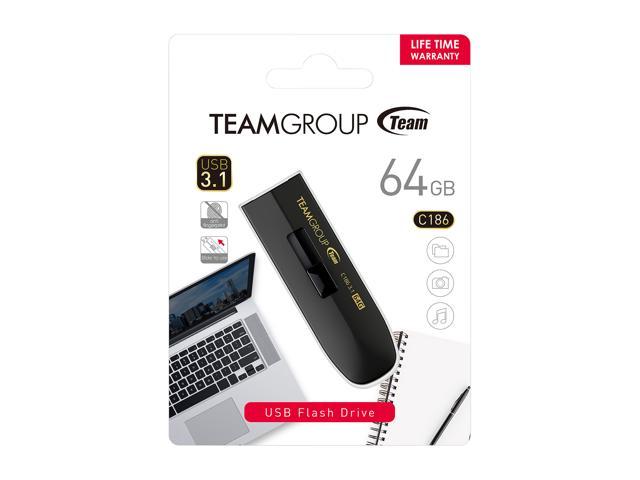 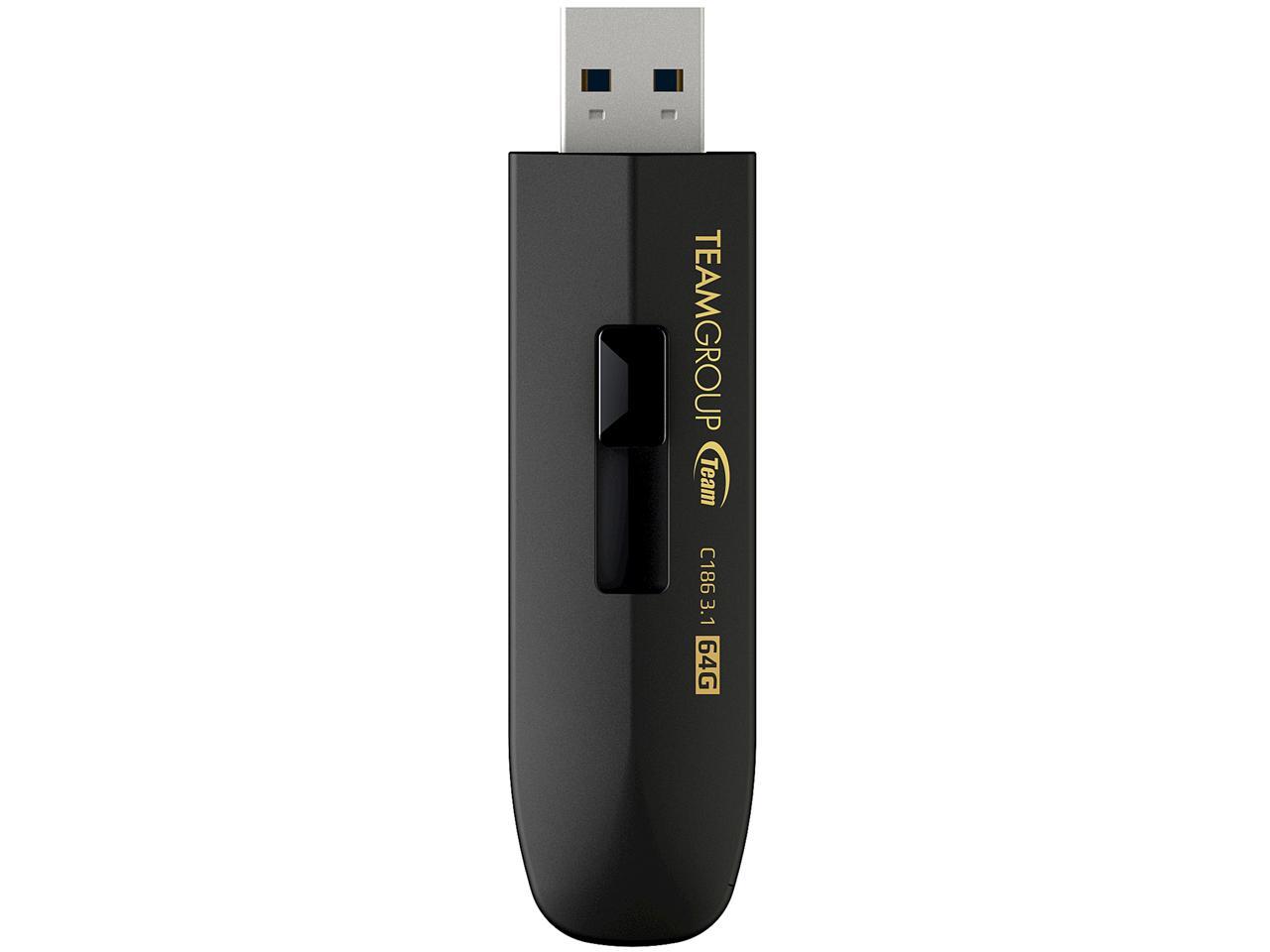 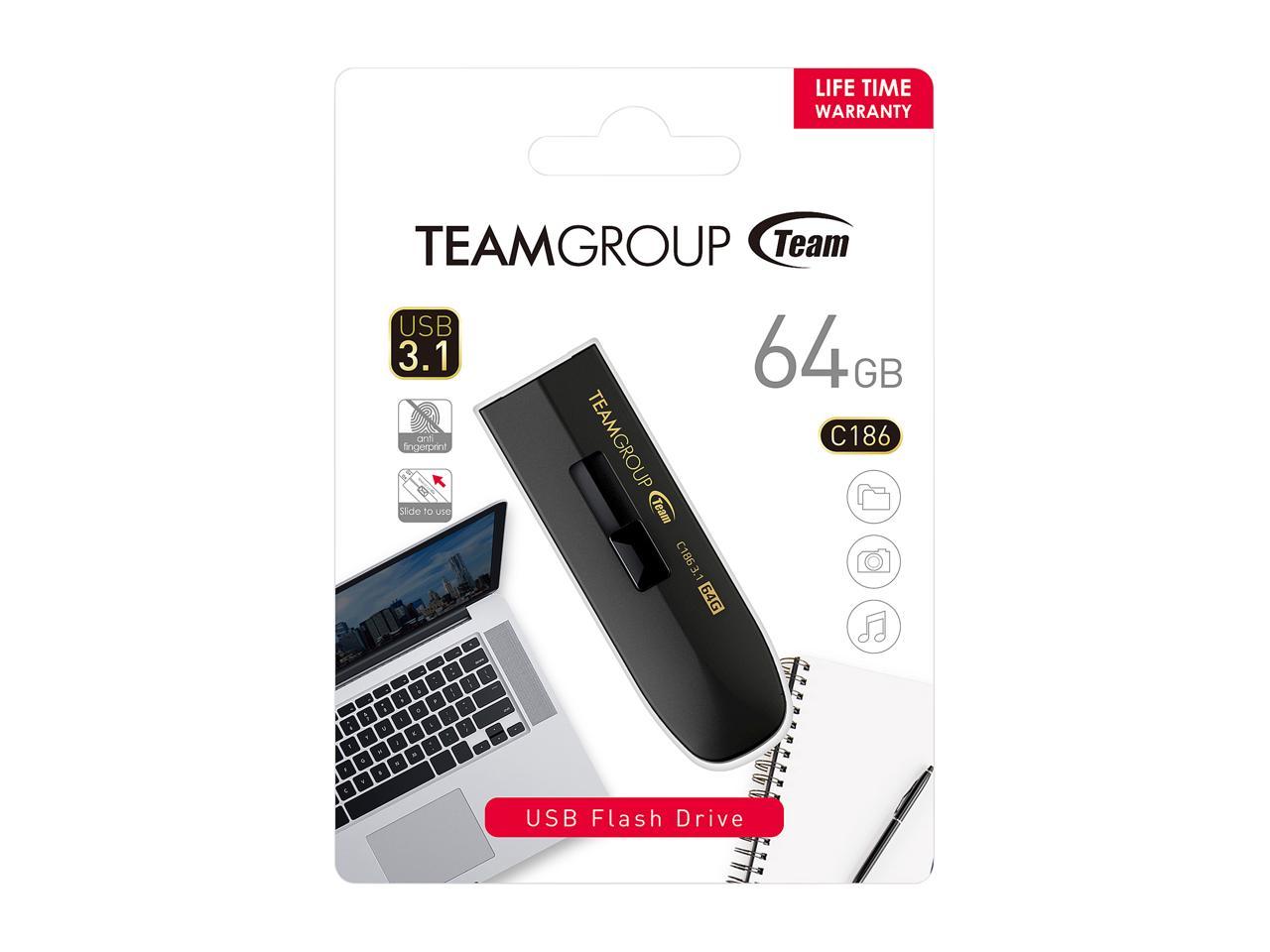 Team Group C186 USB 3.1 Flash Drive is a simple, portable solution to back up and share your valuable files, photos, videos, and more. The drive offers a premium look and feel. The retractable capless design enables easy operation and eliminates the possibility of missing cap. Your data will be transferred fast through the SuperSpeed USB 3.1 Gen1 (USB 3.0) port. A Perfect and Elegant Ridgeline Design

The C186 USB 3.1 drive has an excellent look and feel. The low-key black tone and the premium golden characters are perfectly combined together. The simple and sleek ridgeline also matches with the round and smooth design. The push-button slider is using bevel design to create the most comfortable handheld feeling for users. The C186 USB 3.1 drive is designed with a retractable USB connector, so you don’t have to worry about losing the cap. The special designed structure can slide with ease to reduce wear and tear. It's durable for up to 10,000 times of usage, making file transferring, sharing and storage easier than ever before. Pros: I think these drives are great for someone doing small transfers day to day. Cheap. Build Quality is good.

Cons: I have bought about 8 of these so far. I buy loads for sending footage to people. I'll upload about 80 gigs at a time onto the drive. They all seem to suffer from the USB 3.1 buffer issue. I notice that better designed drives do not have this problem and cheap ones do. The transfer speed will constantly go from 75MB/s to 0MB/s because it does not manage the small buffer on USB3 well. This issue makes transfer large amounts of data nearly impossible. What would take another USB3 flash drive 20 minutes takes this one hours. Team group actually makes a very similar flash drive with rounded edges and a cap that is able to stay a constant 40MB/s.

Overall Review: Would not recommend as the drives transfer speed constantly drop down to zero. I have given this drive two chances and bought two batches. They all have the transfer speed drop issue. Will not be buying them again as I cannot use them.

Cons: Mediocre speed that you'd expect from most budget flash drives. I'm not holding that against it at this price. Also, to be fair to the manufacturer, they don't even market this as a super fast drive. If you want a really fast drive, spend a little more for one specifically made for that purpose, ie Sandisk Extreme Pro. I have one of those as well and it's literally several times faster than this, but also more than twice as expensive.

Overall Review: What I'm really disappointed about is that my TV won't recognize this drive, which is specifically what I bought it for. It recognizes and plays video from other drives, such as the Sandisk I mentioned, but insert this and it says no drive connected. However, I want to be very clear that I'm putting the blame on Philips for this! I very meticulously read the manual. Philips acknowledges that external HDs won't work, and drives that require an external power supply won't work. Beyond that, they only say they don't guarantee every USB drive will work. So what, am I left to guesswork? Trial and error with drives that might average around $35 each? They need to endeavor to be more specific. Better Philips test 100 different drives and make a compatibility list than the consumer! So now I have this extra 128gb drive that I don't particularly need... I'm going to keep it because I don't like returning things and it's not like it's Newegg's fault. Look at the trouble you've caused, Philips. I hope you're happy! TL;DR - Good budget level drive that just didn't happen to work out for my purposes.

Cons: No hole for keychain - but can be made - DIY No Light window for LED - But can be drilled - DIY

Overall Review: TeamGroup cats the corners - but can be a perfect drive.....

Cons: Randomly died in the middle of transferring some files from on computer to another.

Overall Review: I loved the stick when I got it, merged my other two sticks (that I've had for years) on to this one to consolidate. Haven't even been using this one as much as I did the other two after consolidation. Went to use it yesterday, transferred my files on to it, plugged it into the next pc and it just died. now unrecognizable. Was able to reformat it through MiniTool. Saw it for another few minutes. Then unrecognizable again. now I can't do anything with it. Sad.

Cons: No published Read/Write specs anywhere that I could find, either on Newegg's listing nor the retail package. Capless push button design. Eventually most of these buttons wear out. But then, caps get loose and lost. Pick your poison.

Overall Review: Mediocre speeds from USBFlashSpeed: 120MB Read and 64 Write from file sizes 128KB and above. Smalller file sizes slower. But no complaints really, I got everything I expected for eight bucks.

Pros: I wish I could take all my books and put them on one or two of these. Same goes for my CD's. All kidding aside, I've got maybe 50 movies on one now, mostly old B&W films, some from archive.org. It's great for getting upstairs and seeing an old movie.

Cons: Once in a while one of these goes bad, and since this one sports a LIFETIME GUARANTEE (this Team Group 128GB C186 is my first, and so-far, so good, I can't say I've taken this to the bank. However, I did send back another brand to newegg and got a replacement 36GB of that type no problem.

Overall Review: I'm an older user, so the fact that I can have so much on such an easily transportable storage device is still very awesome to me, like having humans in "outer space" right now. I only wish we knew how to be better to each other on earth. But that's not a FLASH DRIVE issue.

Overall Review: - Compared to the couple of SanDisk 3.0 drives I have, this one is very slow on large transfers. We're talking 3-7 times slower, where the performance depends on the size of the transfer. The larger, the slower. There is an initial burst of speed for the first 100MB or so, but then it struggles for the rest of the transfer. - The limit for fast transfers seems to be approximately 100 MB. I ran a few tests with individual and multiple files and the write would stall when the amount became around 90-110 MB. - That said, once the data is on the drive, it works just fine. The read speeds are actually slightly better than my SanDisk drives. So, if you are mainly planning to read data from the drive, the one-time cost of the slow write speed may not matter too much in the end. Or, if you are going to be putting on data in small doses of under 100 MB per transfer, you'll probably not even notice a problem. -As for the physical drive itself, it's decent. The slide button works well, pretty much as good as my SanDisk drive, and while it is a bit larger than I'd expected, I wouldn't say it's too big.

Pros: Worked great until it died

Overall Review: One minute it was transferring, the next it froze up, unresponsive. I have literally never had a USB drive fail on me in over 17 years that could not be-reformatted to bring it back to life. I guess my luck ran out.