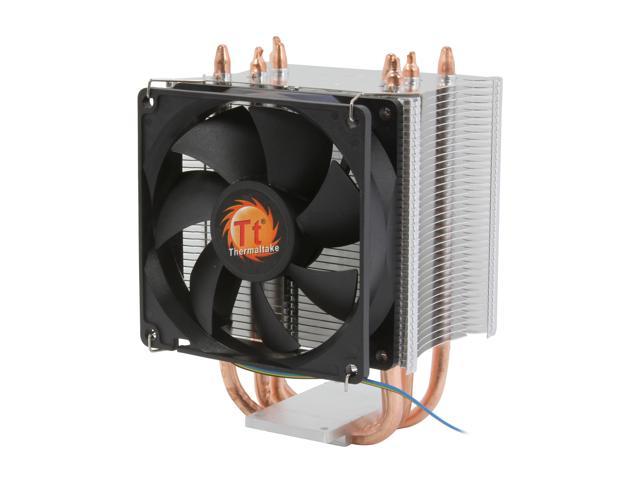 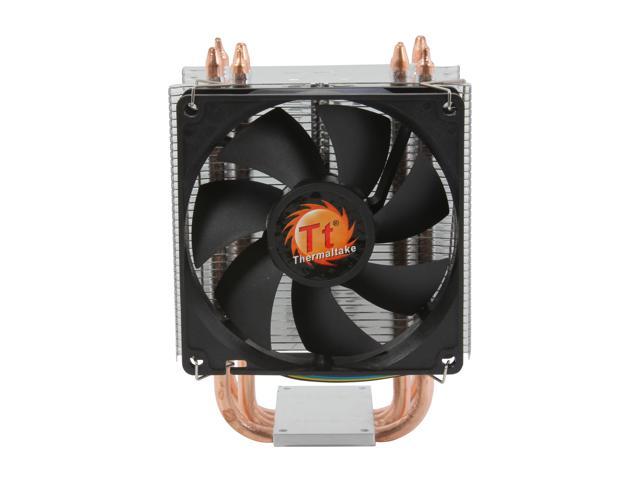 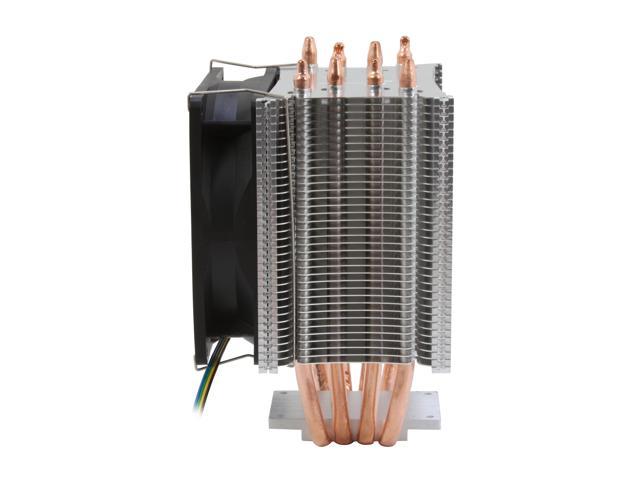 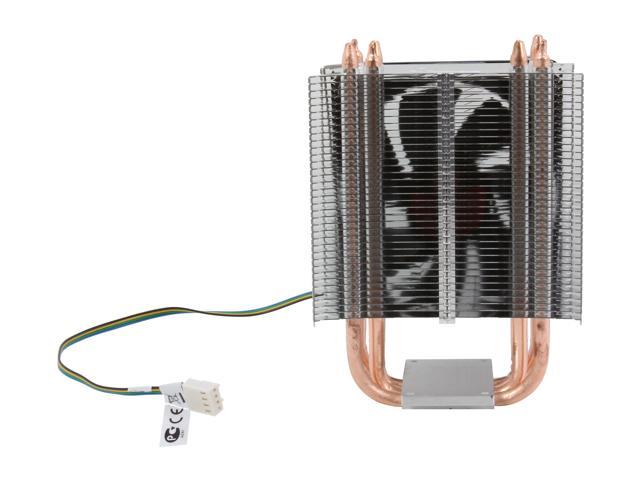 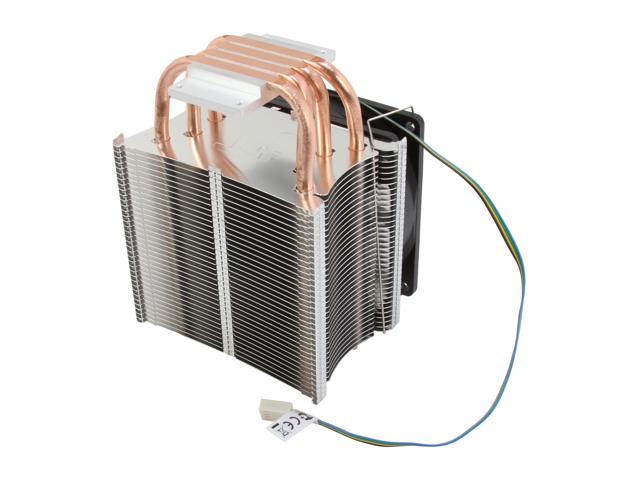 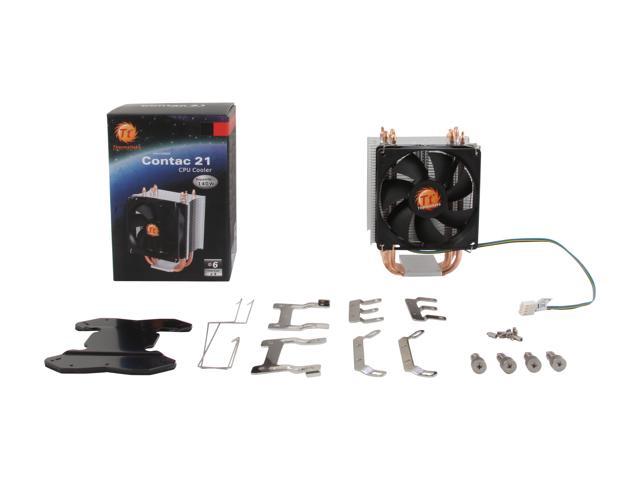 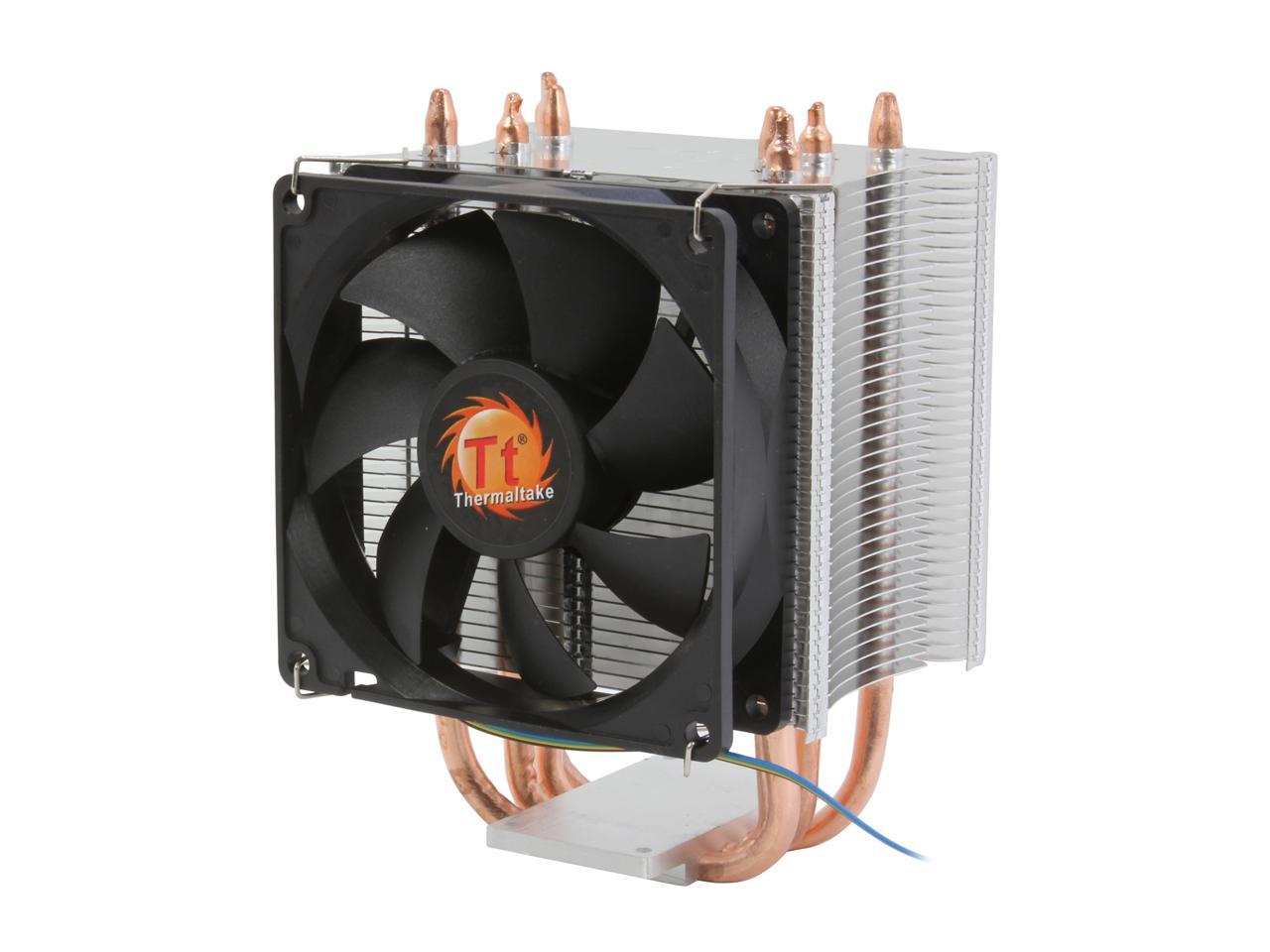 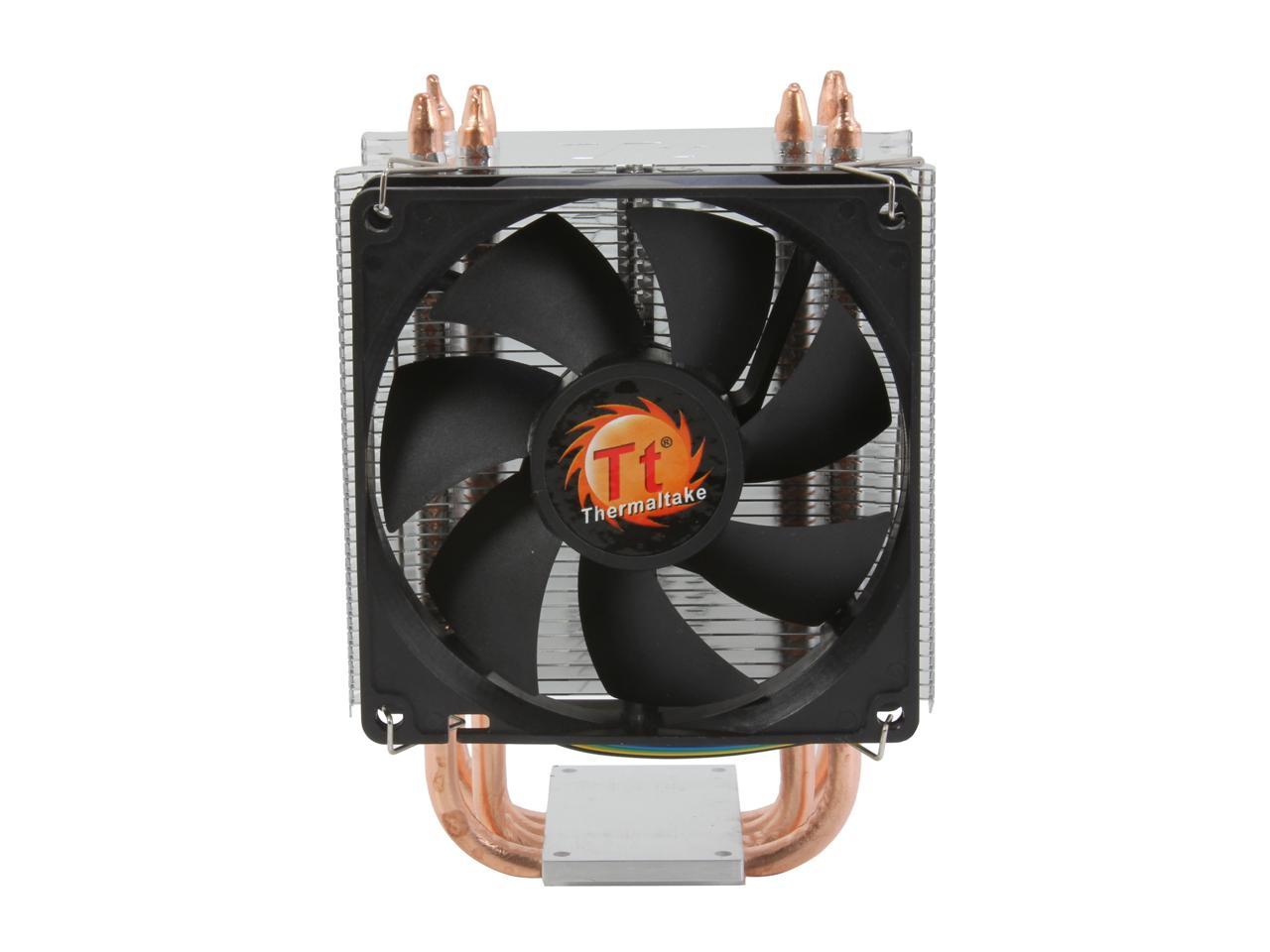 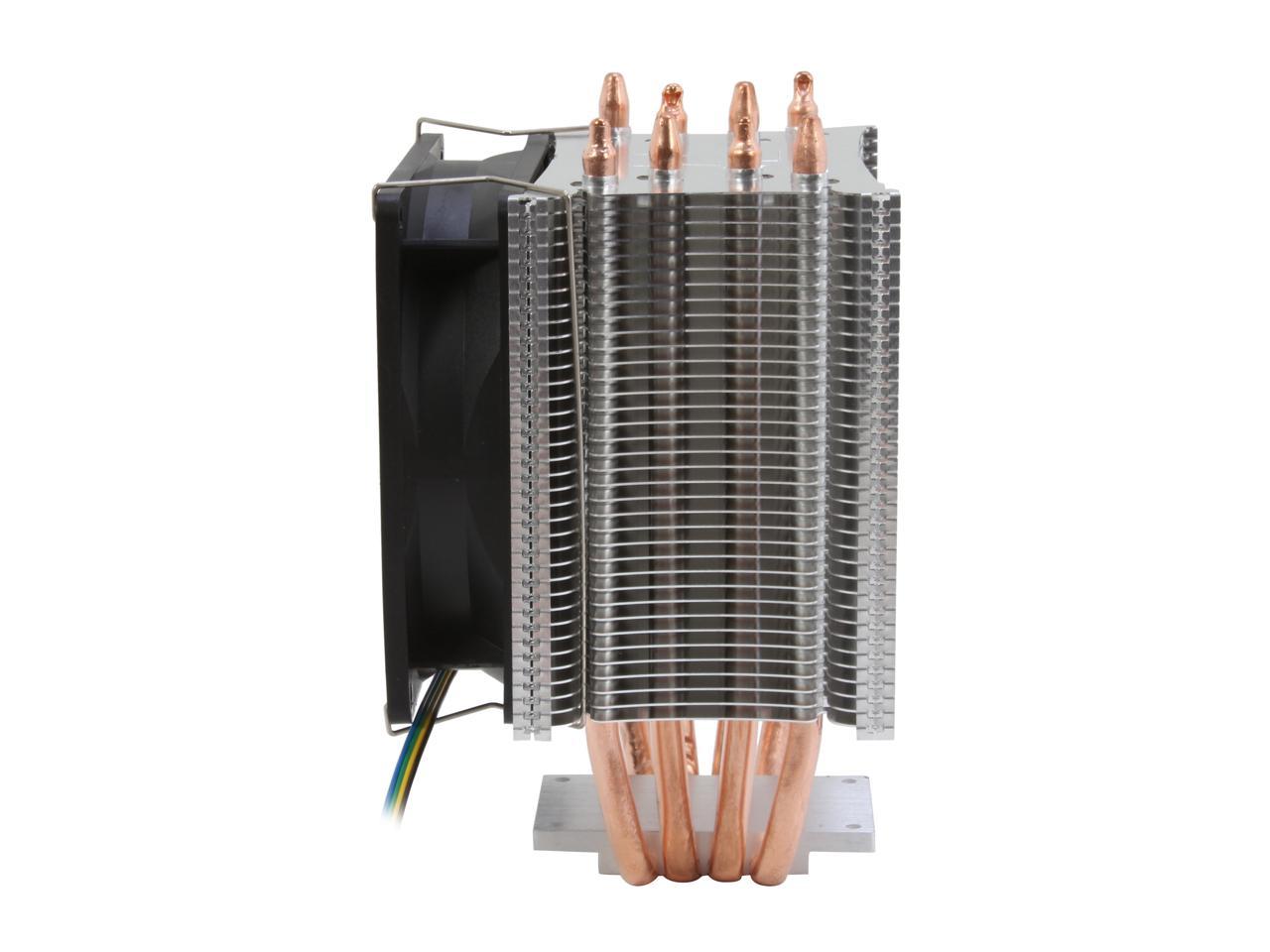 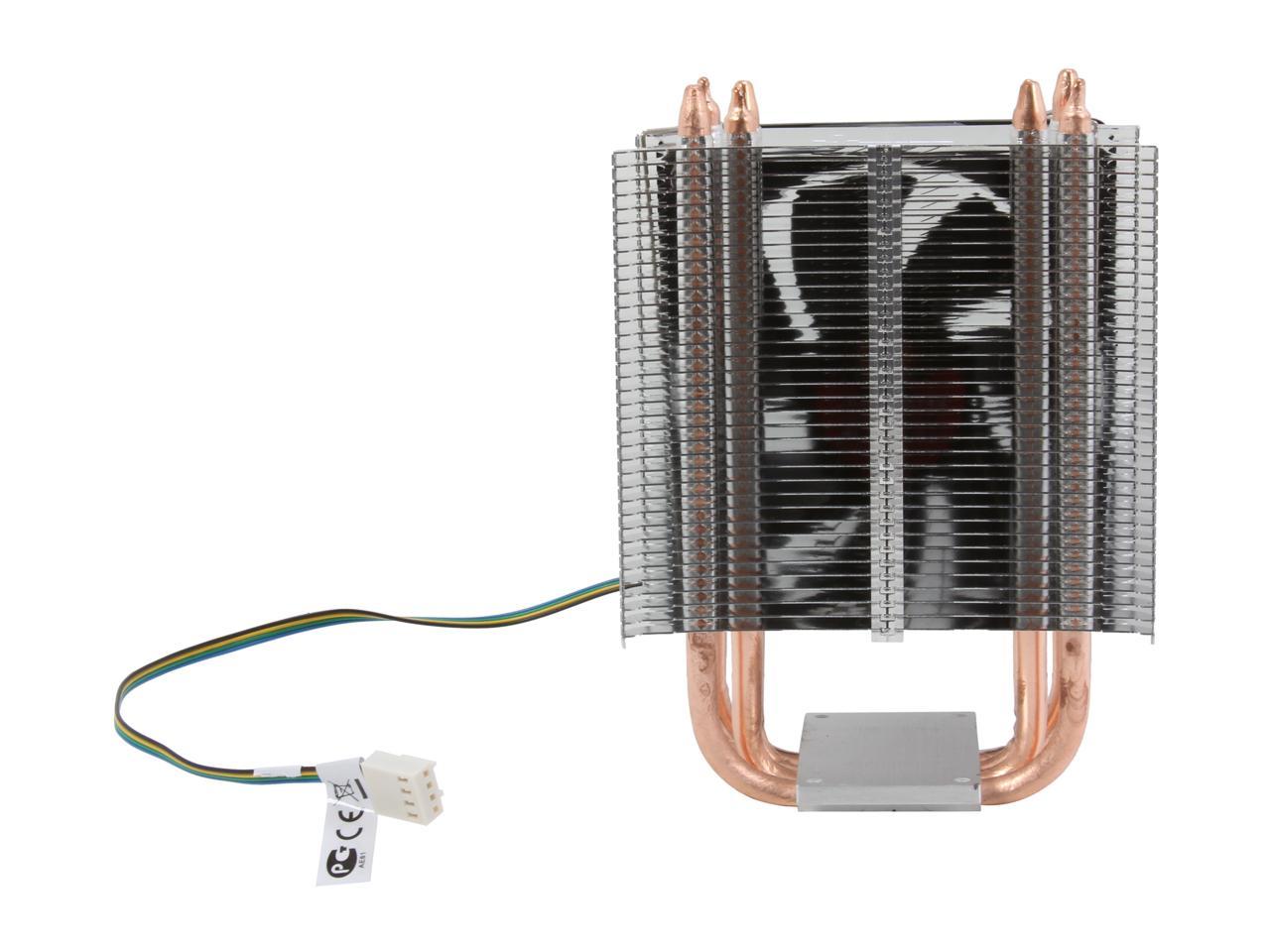 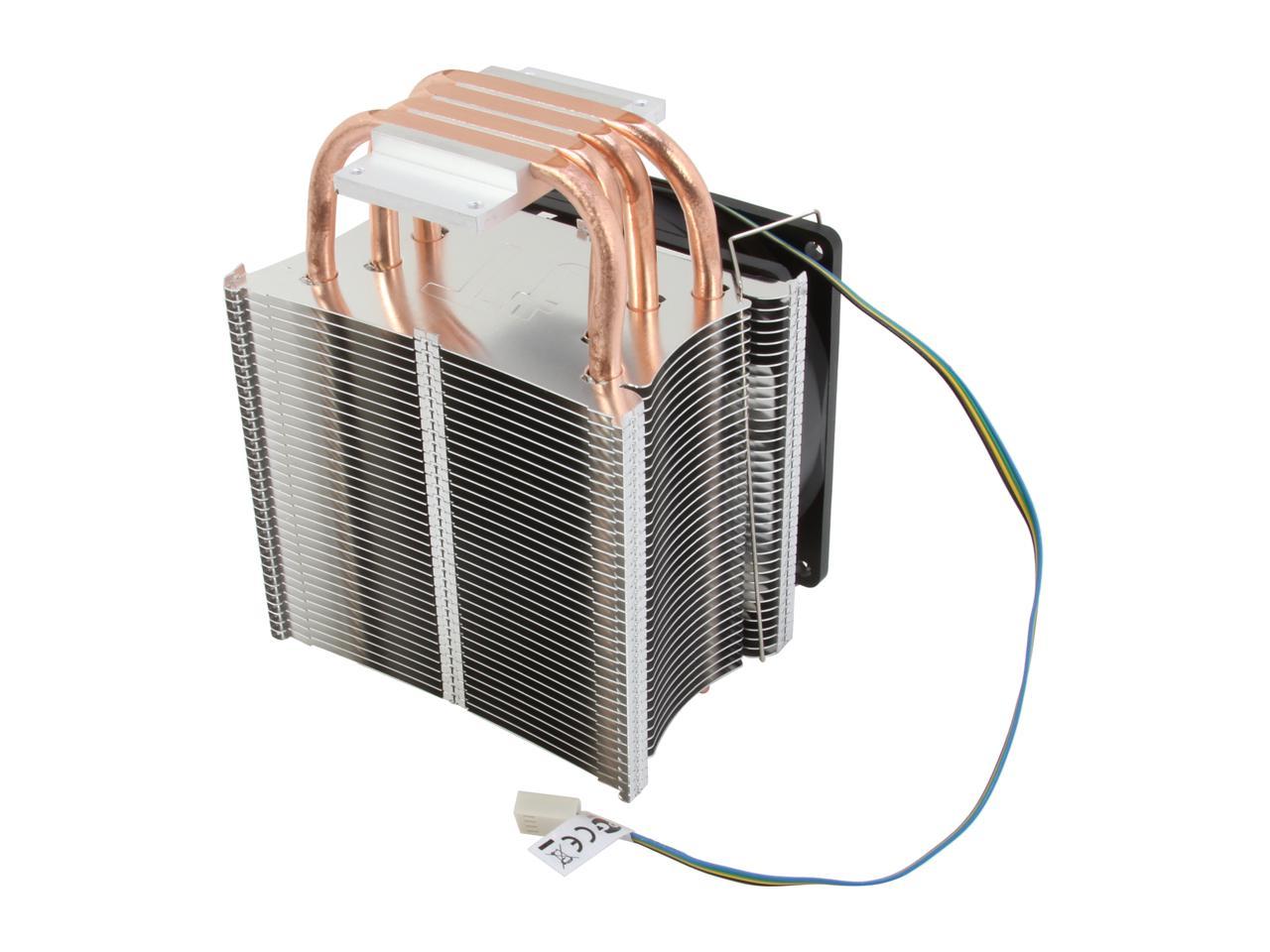 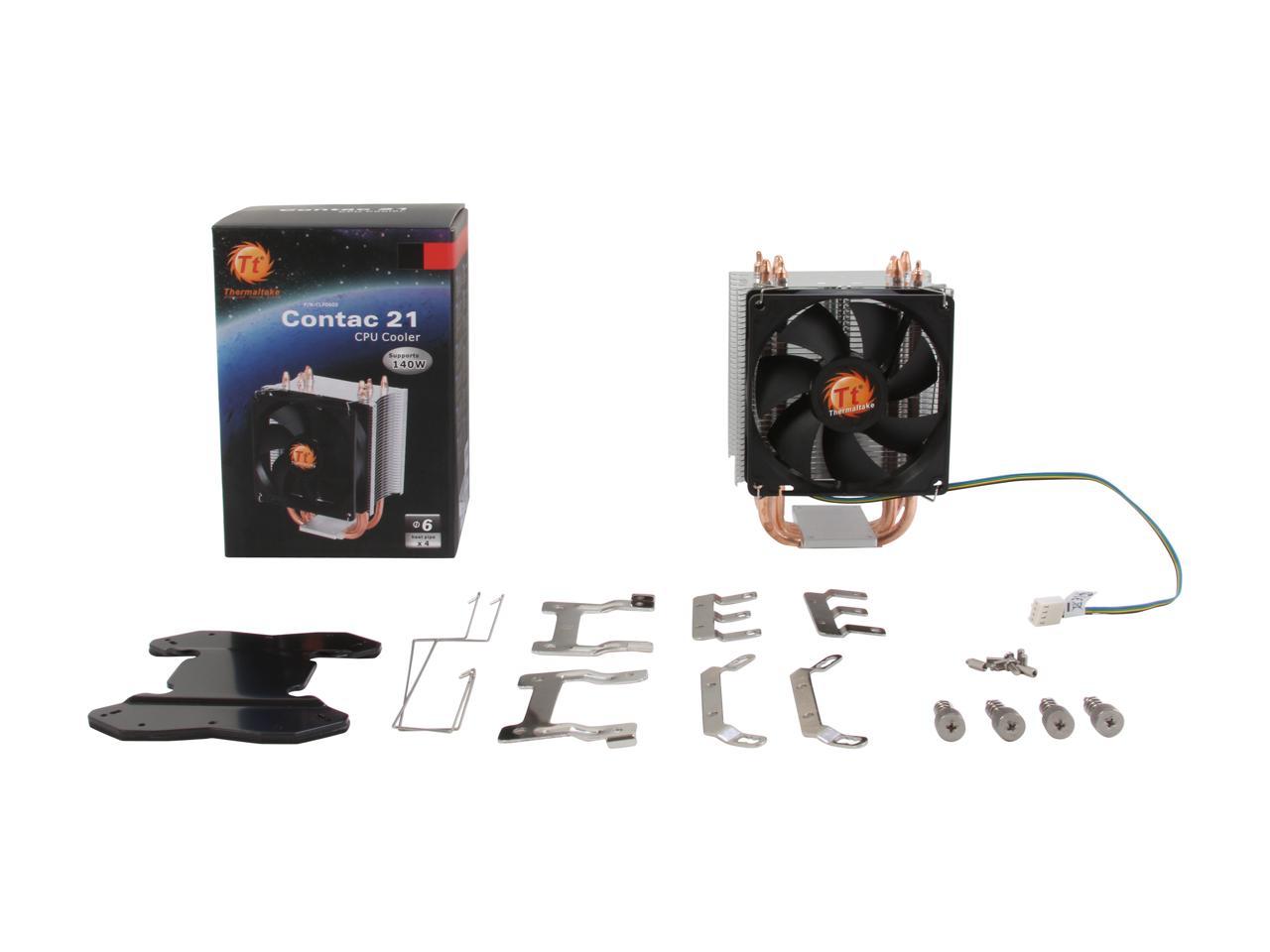 The Thermaltake CLP0600 is built to perform with four 6mm Heat-pipes with Heat-pipe Direct Touch Technology for superior heat transfer and one 92mm PWM fan along with the capability for installing a second fan. It is compatible with the mainstream CPUs with TDP up to 140W.

Learn more about the Thermaltake CLP0600

Cons: Terrible mounting. The quality of the hardware is good, and the brackets/backing plate are well designed, but we're expected to bolt it all together at once which is ridiculous at best. The backing plate should be mounted separately, then the heatsink to the plate. In this case, even if the backing plate was mounted first, the screw design makes it nearly impossible to secure the heatsink without it tilting/moving etc. Good cooling potential is almost negated by poor fastening. To make it work, you must spend more effort & money.

Overall Review: Not recommended for people on a short schedule, low patience, or the mechanically challenged. Only recommend for NEW builds or for someone who is planning to remove the motherboard. Nearly impossible to mount on an already installed MB. If you like a challenge, go for it. To make the install easy as it should be, expect to spend a few bucks on new screws/nuts/washers and maybe drill some holes. Helps to know your way around tools, and enjoy minor customization. I mounted this on an AMD AM3 board cooling a Phenom II X4 830 which will be overclocked after I'm sure it's stable, and after enough thermal cycles.

Pros: The fan is very quiet, and it's keeping my CPU temperature down a LOT lower than it was on the stock fan/heatsink that came with my computer. Right now it's measuring at 28 degrees celsius. It's not nearly as hard to install as some other reviews claimed. The trick, I found, was in detaching the motherboard and assembling the brackets while not connected to the computer. So it wasn't easy, but the process was simple once I figured it out. I have an AMD processor too, so I don't know what other people found difficult about it.

Cons: I was hoping not to have to detach the motherboard for installation, but that took all of 5 minutes at the most. I really don't have anything else bad to say about it.

Overall Review: Things to remember: a bracket has to go under the motherboard in order for it to attach on top. The whole system is rather large also, so make sure you have room. Mine fit perfectly in, but I can imagine that it might not if you have an older computer.

Cons: A little hard to install, since you had to take the entire motherboard out to install the bracket.

Overall Review: i7-2600 was running about 65C with stock Intel fan, now running at around 30C

Cons: Every now and then the fan will not turn on when the computer sets up. This is easily solved by re-starting the computer. Not really a con, just can be an inconvenience.

Overall Review: I have used this CPU fan for over six years now. Still works fine.

Pros: Great Cooling. Nice a quiet and keeps my CPU well under temp under heavy extended load.(folding app) You get a lot of cooling for a good price. Plus it looks nice in the case.

Cons: Harder than average install. I installed this one as a replacment for my LGA775 Intel Core2 duo. Very hard to install in the case event with back panel access. Its a very sprung system for good reason so take your time doing the install. Easy way is to have the board out.

Overall Review: I really like the option for a second fan with the included brackets but I can't see the need unless you are OC.

Pros: Temperature reduced quite a bit (33%) over my stock heatsink/fan.

Cons: The installation of this unit is ridiculous. I've built over a dozen PCs, rebuilt car engines, built decks, fences, etc. I know how to work a screwdriver! It took almost 3 hours to install this thing. A few tips: 1. Run the screws through the threads on the backing plate. The holes on my backing plate were poorly tapped. Also, this will show you which holes aren't actually vertical 2. Remove the fan during install 3. Fully compress each screw spring. This will allow the screw to thread into the back plate more easily/cleanly. Shortening the spring a bit by fully compressing it doesn't affect the tension it generates.

Cons: Higher priced than some competitors, but you get what you pay for Its kinda big, but as long as your rig can handle it, its not really a con.

Overall Review: Overall, the installation wasn't too insane. I have a mATX so my space was a little more cramped; I did have to remove my video card and the fan from the unit, plus I made sure to compress the anchor springs down a bit with a pair of pliers because they are wound pretty tight -as other reviewers have mentioned.

Cons: I have assembled 4 computers from scratch with not the least trouble, and consider myself somewhat of an expert. However, on trying to install this cooler, I found it IMPOSSIBLE. Removing old backplate, installing CPU, thermal grease, positioning Thermaltake backplate, and putting the proper clips on the cooler base were routine. However, this cooler requires 4 spring screws to go through the cooler clips, and some distance to the motherboard holes and Thermaltake backplate. The first problem was to align the cooler clips, motherboard holes, and. hidden backplate. I solved this by putting 2 screws, without the springs, in diagonally to align everything. But when I tried to put the third screw in with the spring, it took excessive pressure to overcome the spring enough to reach the baseplate and screw it in a little. The cooler immediately tilled toward the spring. It was literally impossible to tilt the cooler back enough to install the 4th screw with spring. If I could have done this, I would have still had the same problem with the other two screws when adding springs to them. Other coolers usually have a section attached above the motherboard. And this is what the cooler is attached, often with a lever to easily apply the needed spring pressure. I later found that other websites also warn against this problem. I haven't even mentioned the danger of all this pressure to the CPU and motherboard. Fortunately, they weren't damaged. Thermaltake trying to save money has made a defective product. I told their rep this problem is very severe and needs recall. Rep said will pass it on, but can only RMA for the same product.

Overall Review: If the above wasn't enough, I sent 3 rebates together to 3 companies including this one. The other 2 have confirmed receipt of the rebate; not Thermaltake. This used to be a good company. Now trying for worst around.

Manufacturer Response:
Hi dspear, I believe I had spoken to you over the phone and I did in fact pass the information to our HQ for review. In regards to the rebate, we actually hire a 3rd party company for rebate processing which means that we do not have any of your paperwork. If you have not yet contacted the rebate company please do so at 1-800-286-9146. If for some reason they fail to help you, please contact our customer support team immediately so that we can step in and assist you in dealing with the rebate company. Thank you! Thermaltake USA Customer Service 0057 1-800-988-1088 M-F 9am~5:30pm (PST)