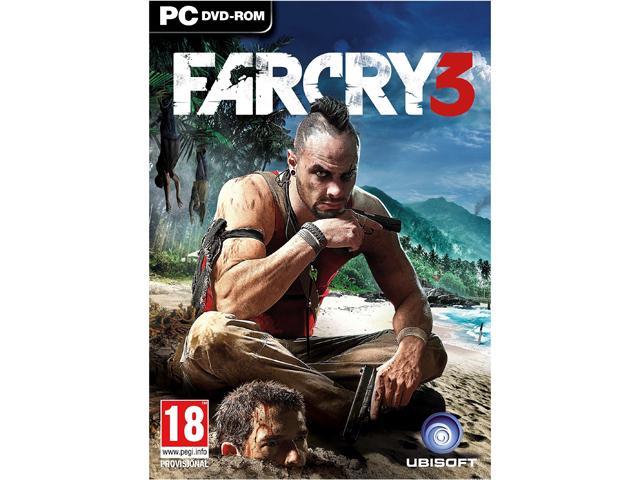 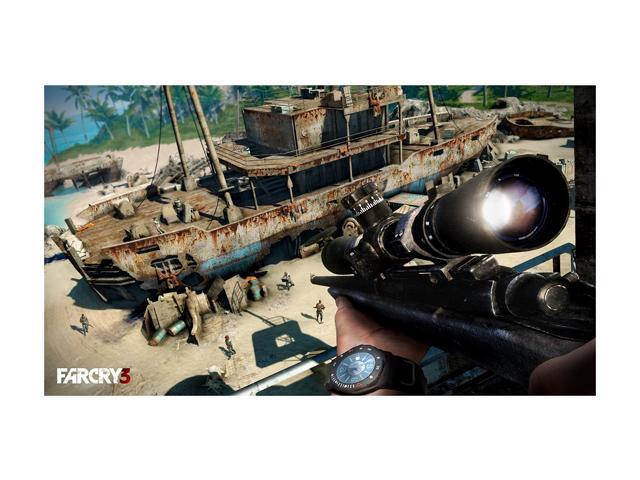 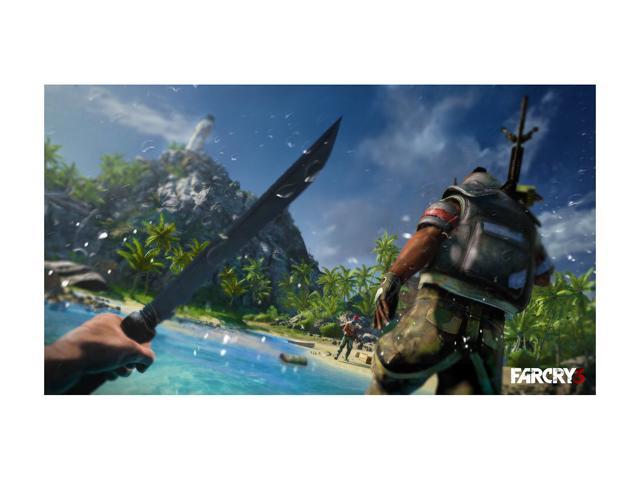 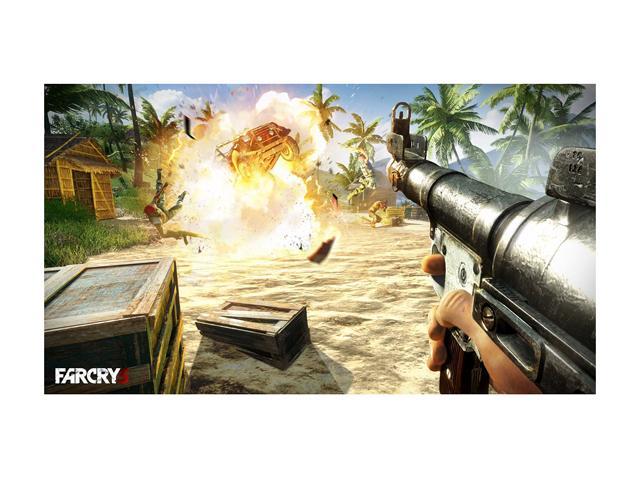 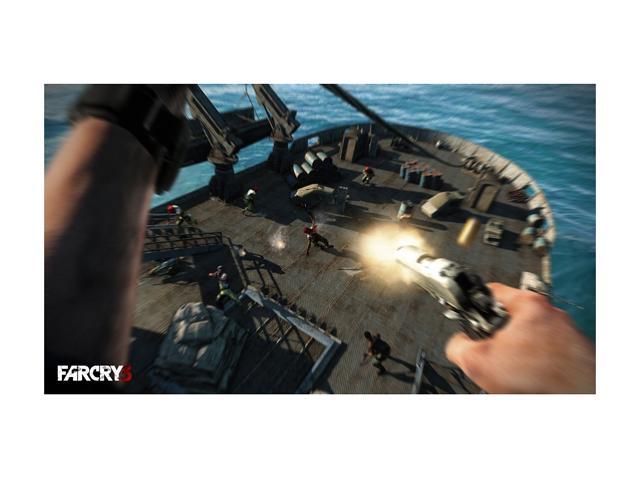 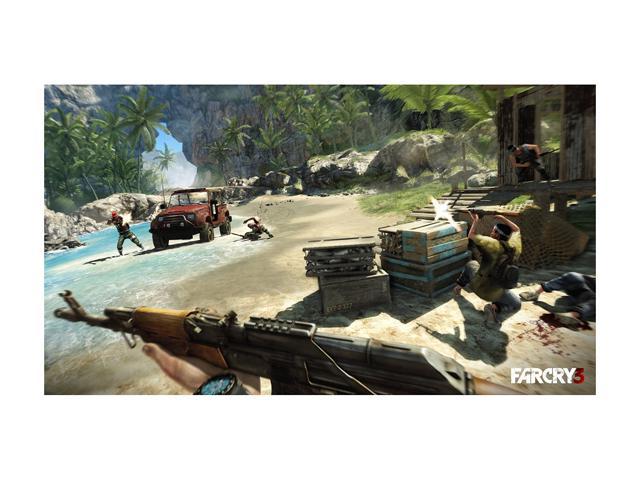 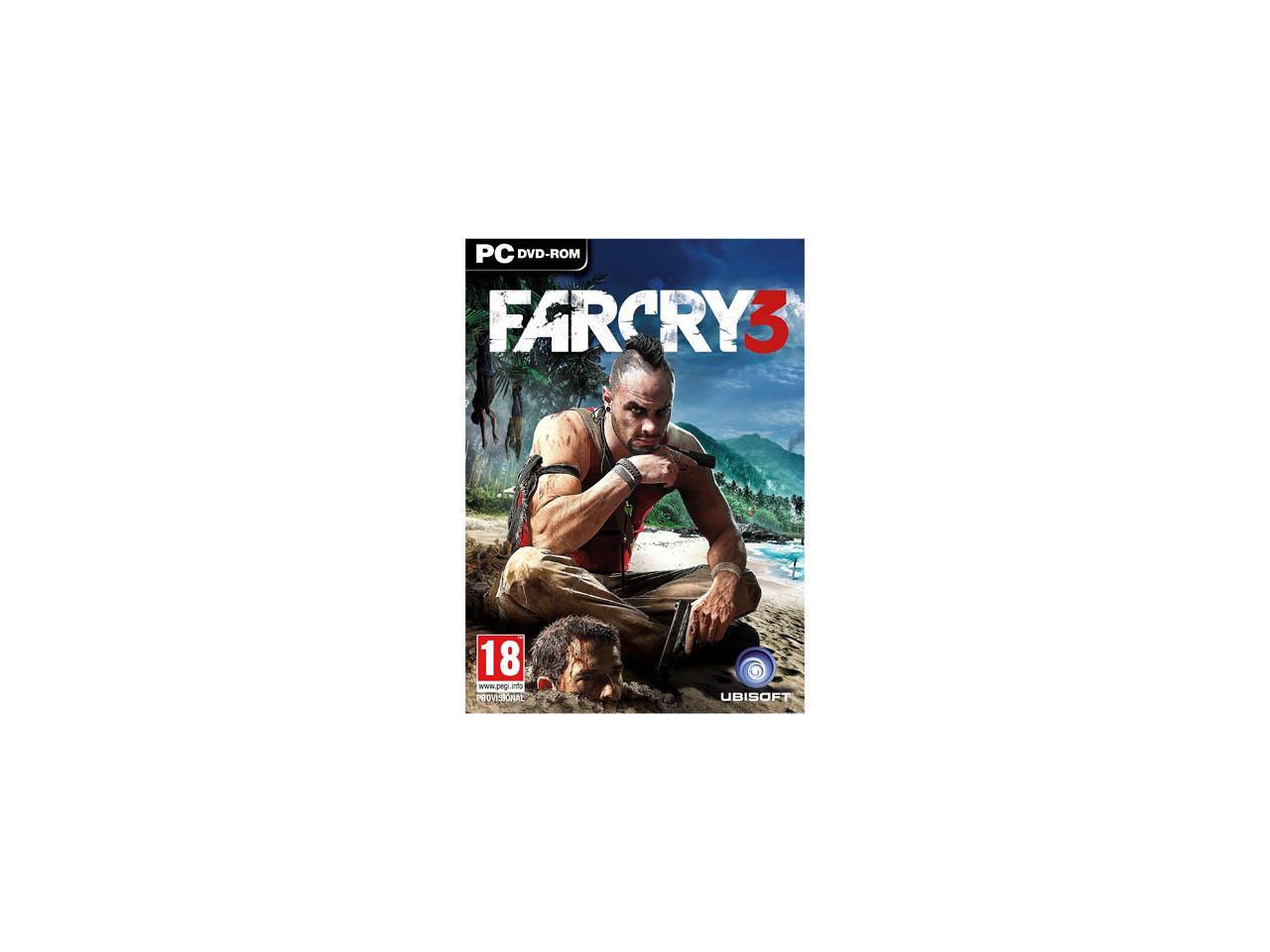 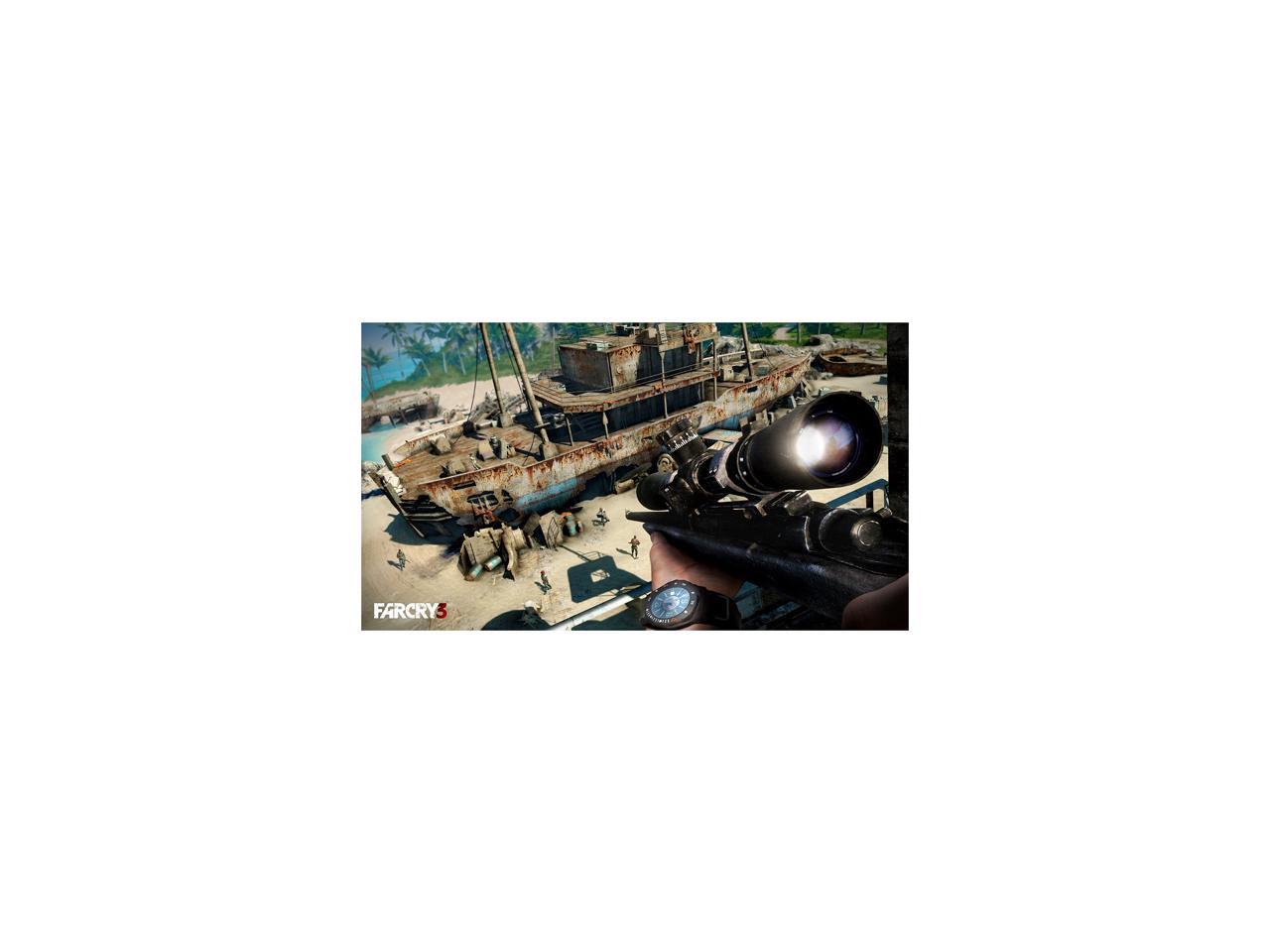 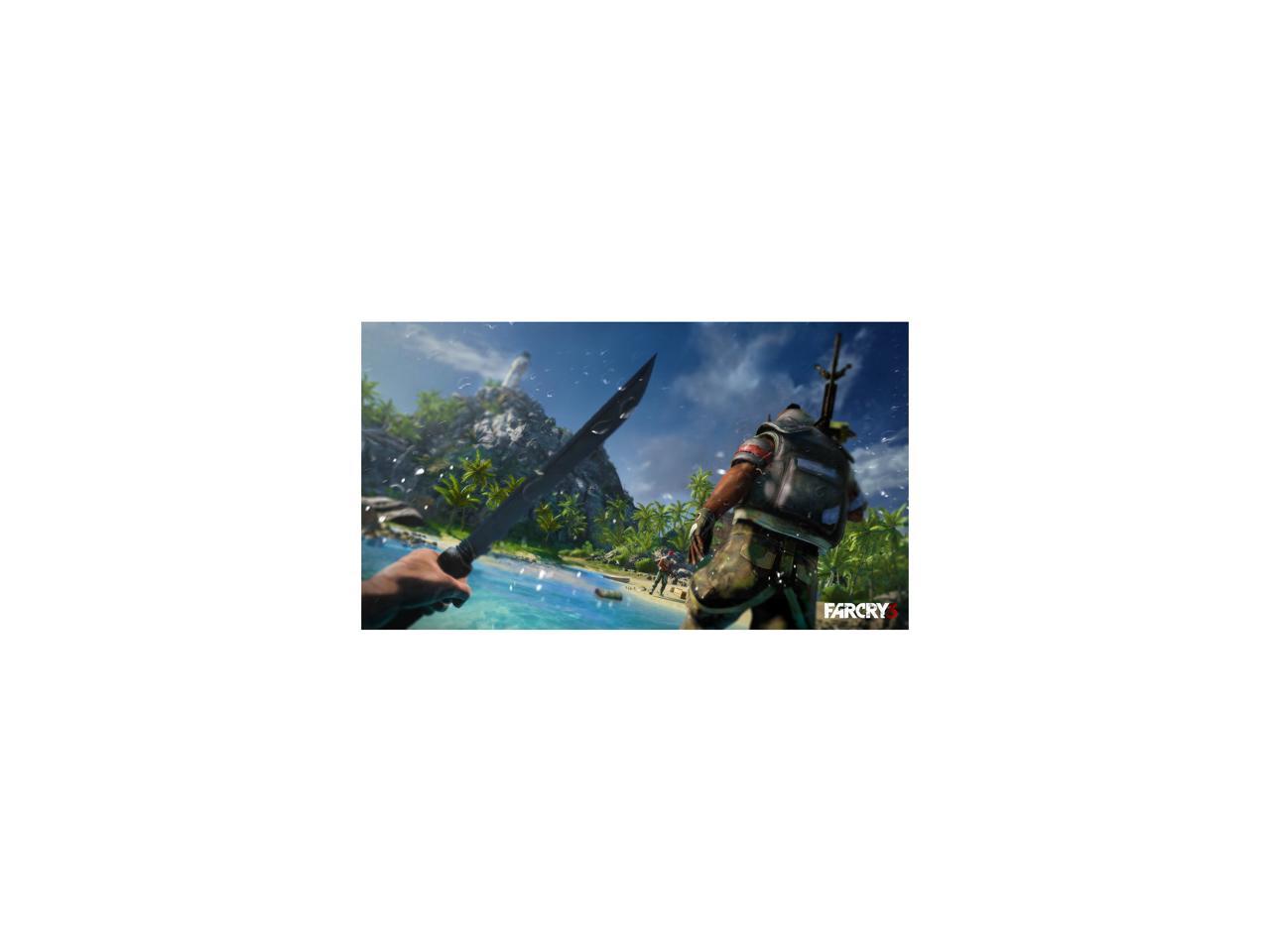 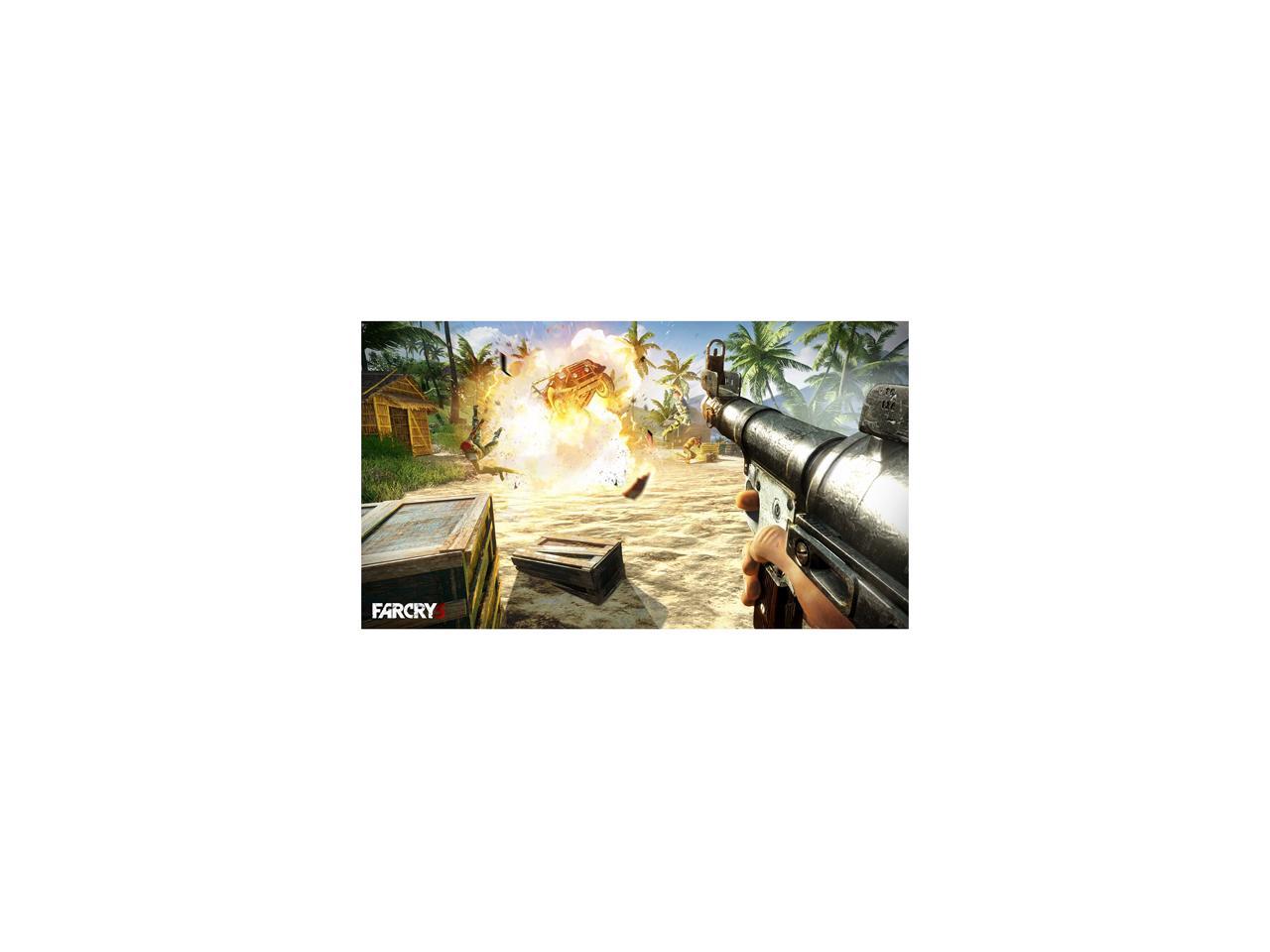 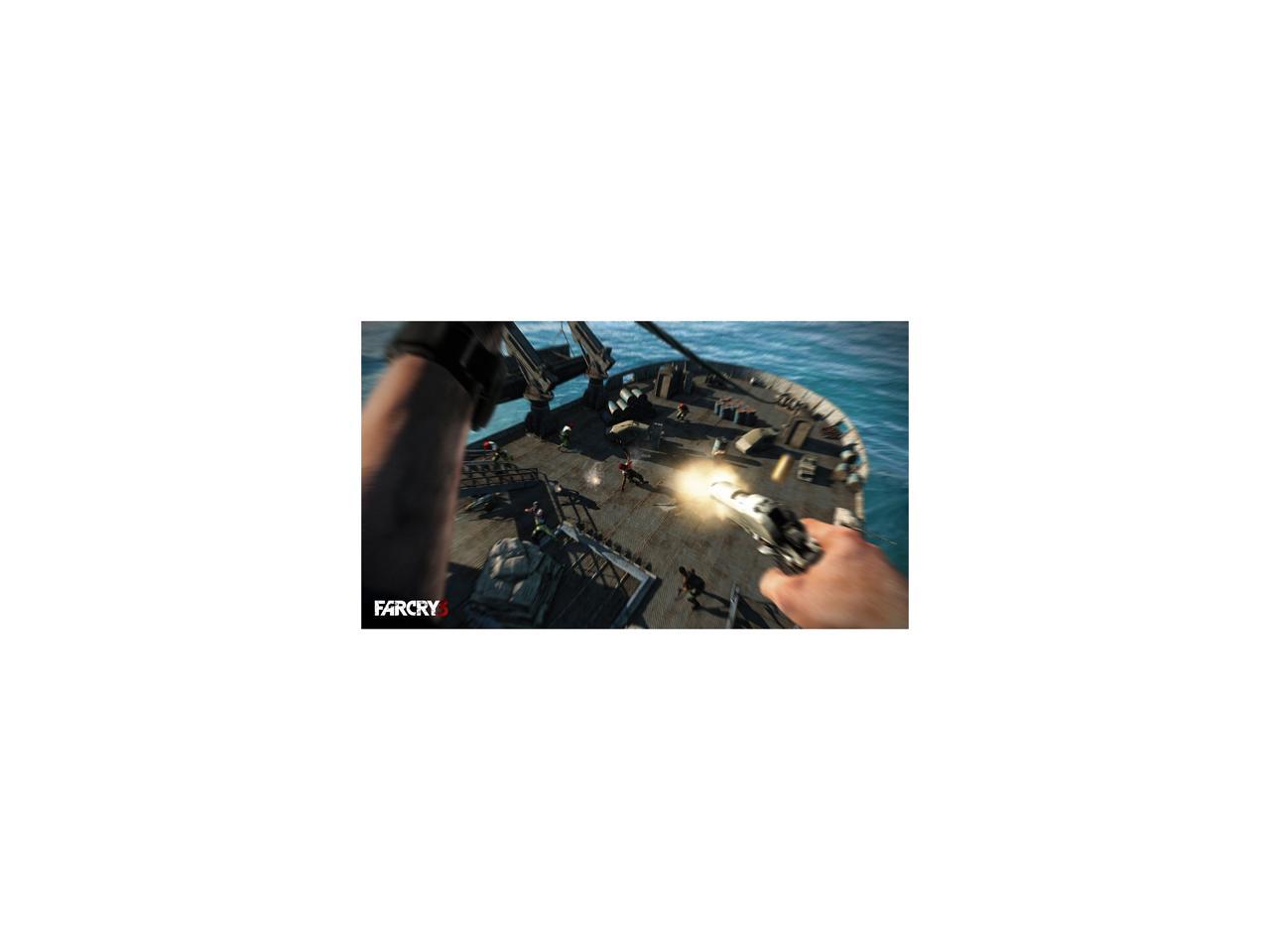 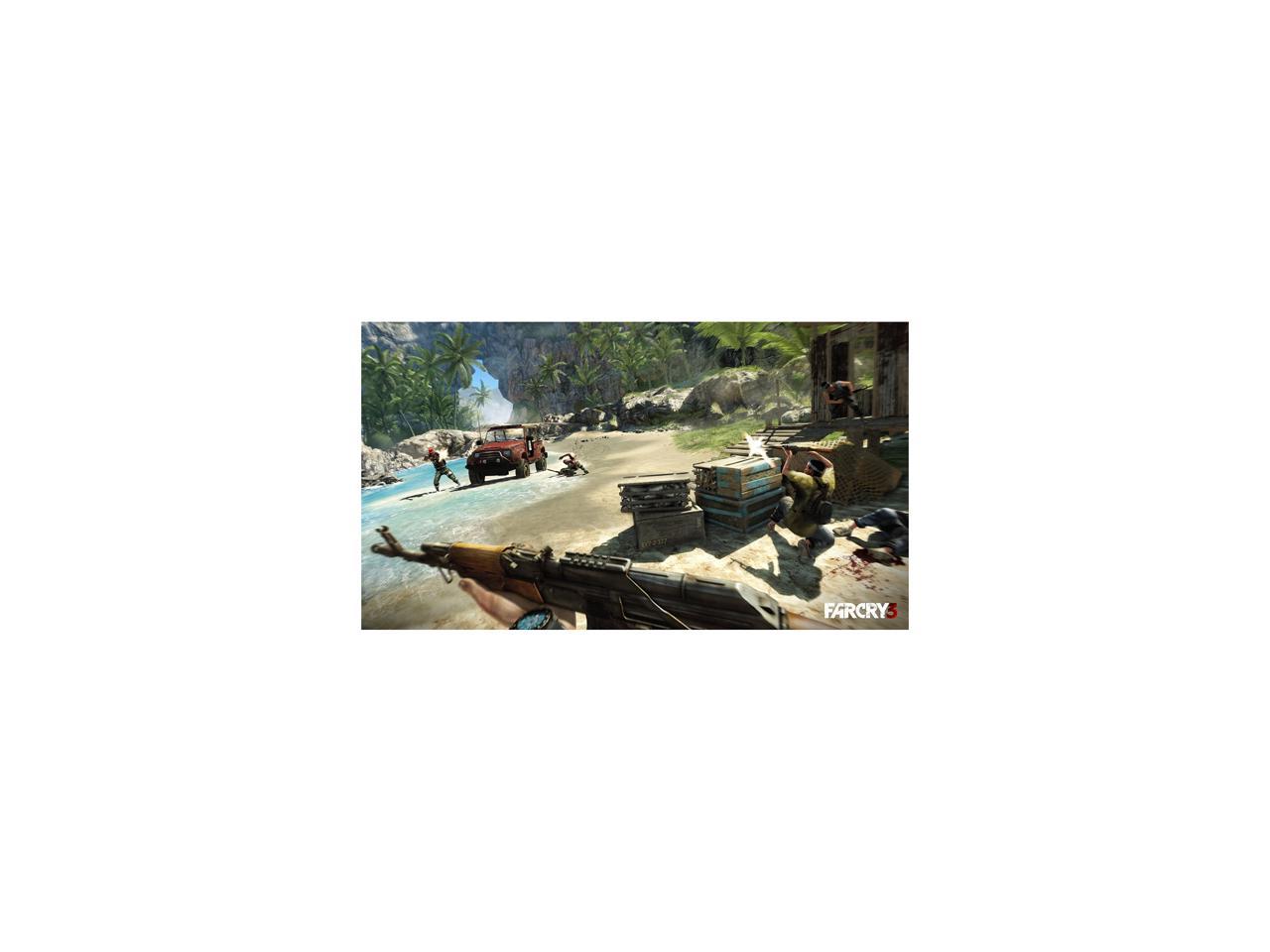 
Beyond the reach of civilization lies a lawless island ruled by violence. This is where you find yourself stranded, caught in a bloody conflict between psychotic warlords and indigenous rebels. Struggling to survive, your only hope of escape is through the muzzle of a gun. Discover the island’s dark secrets and take the fight to the enemy; improvise and use your environment to your advantage; and outwit its cast of ruthless, deranged inhabitants. Beware the beauty and mystery of this island of insanity… You’ll need more than luck to escape alive.

Learn more about the Far Cry 3

Pros: Graphics marvel. Basically the game looks stunning on a high-end PC. (But so did Far Cry 2 back when it came out) There is a ton to do in Far Cry 3... lots of RPG elements, quests, upgrades, weapons, crafting, buying, selling, etc. Cut scenes are excellent. Character acting is good.

Cons: Can't holster a gun unless in a safe zone. If I am exploring or running around the beautiful island for fun, why would I want to keep my gun out the whole time?? This was a problem I had with FC2... but so far I like FC3 much better. I've noticed a few bugs but nothing major.

Pros: Not a single glitch on my overclocked i5. windows 7 EVGA 550ti Waited for the right price after farcry2. Got it! Just enough cartoon factor Satisfying game play Great Graphics

Cons: It's not a game for everybody based on the other reviews Ai faults made gameplay a bit too easy. I've been around FPS for a real long time and it's either they smell you coming a mile away or you can kill without a sneeze. Save limitations reduce replay vale. This was a big one for me early on. Sometimes dying was a major setback. O prefer the fallout save system where you can save, try a new technique for a kill and try again quickly if things go wrong ( and in FC3, there are plenty of twists and turns)

Overall Review: I've played all three FC games, enjoyable distractions if not somewhat frustrating at times. I had zero problems with Ubi play. With the very wide variety of copy protections systems on market, I prefer a live internet connection to something that plays havoc with my file systems. The voice acting was good even with the stereotypical mercenary types., I felt the role of Jason while playing. Too bad they didn't include a full sheet of temp tattoos that could be applied during gameplay. While I finished the main section of gameplay with only about half the map explored the developers could have forced the unlocking of far more parts of the map before allowing the final chapters to play out. so don't be in a rush to follow the main storyline. Plenty to do. The taking of artistic license from some of the Indiana jones movies was a bit of a cheap out on one hand, but fun to play on the other. It was a bit predictable in that regard. At the heavily discounted price I paid ( a bit less then the currently discounted price) It made for a good summer distraction

1 out of 2 people found this review helpful. Did you?
Leann M.
Ownership: 1 week to 1 month

Pros: editor that is all map i made is better then the game

Cons: it cost $60 its just like farcry 2 1st fry cry still the olny good one what a waist of time

Pros: Don't know yet just got it to start --- no sound yet - vary choppy video

Overall Review: My fix, to get it to just get it to start-up Fix was remove .NET 's re-install / Beta drivers from ATI (xfx ON-xfx1-pls2 radeon hd5450).. I hope to update with better new's

Pros: Simply best open world sandbox type game around. Use Ziggys Mod at Nexus to make all the bad stuff go away on HUD and GUI things after first playthru, amazing when you play game like you are there and no interference from tips and guides. Try his hardcore master setting, it is a challenge, you can play the game as you like, it is your choice with his mod.

Overall Review: Get it for this price and put Ziggy's Mod on it and you will thank me.

Pros: I've never played any of the previous Far Cry games, but I did "look at the very first game" way back in the early 2000's. ...And wow, I play a LOT of games, but Far Cry 3 has really got me impressed! The gameplay reminds me of Skyrim + Uncharted, that's a great combo IMO. I have almost no complaints with the game, and I'm already 1 month into playing the game. It's easily one of the best games of 2012. If you like "open-world games" then this is the game you should play!

Cons: My only complaint with the game is the menu system: some stuff is a bit cumbersome to manage, but honestly the game kinda knows it, and the Developers did a decent job of mitigating it, and helping the player to access these limitations... Nevertheless, the game is pretty fluid, and I recommend it to all my friends -no questions asked-.

Pros: Played FC 1 and FC2. So far, this beats both, by a wide margin. 1) Amazing graphics on an average rig (q6600, 4850 x2 crossfire). 2) Storyline is great. 3) World is enormous - exploration is unlimited. You can really get diverted. I've spent 15 hours on the game and have barely cleared 3 maps (out of 16?). At this point in COD MW3, I had finished the game. 4) vehicles are a ton of fun to drive 5) biggest pro - sandbox flexibility 6) love the new system where you clear out enemy camps. However, the map gets pretty boring once you clear it out - no one to shoot at. The excitement is when you sneak into an uncharted map while enemies are everywhere. 7) Love the wildlife - the island is teeming with life 8) AI is pretty amazing. Enemies AND Animals try to flank you. 9) Love the skill trees and building up your character to be a badas. Great satisfaction when you chain together takedowns like Batman.

Cons: 1) Some missions are lame. - the one where you get a mission to intimidate a mother's daughter's abusive husband. You basically walk 20 feet, shoot at the guy's legs, come back, and done. Wow. 2) repetitive loot and relic finding. I hate that game developers try to get you to expand the gaming time by making you "collect them all. " It does force you to explore the entire world, however. And not just rush through the main missions. 3) not enough weapon types - would like to choose beyond 3 in each category (handgun, shotgun, rifle, etc) 4) Crafting syringes is kinda silly - especially since they don't give you such a great boost. I've ignored them mostly except for the invincible syringe.

Overall Review: DHL is absolutely awful. Please don't use them anymore Newegg. I used to get my packages from Newegg the next day, even with super saver shipping via UPS. DHL lost my package for 12 days. I finally got it after reporting it lost and reordering. Those 12 days were excruciating.

Pros: Graphics,coding and very fun . more about the grahics , when i first saw BF3 i was amazed at the adaptive AA , but this game amazed me once again , the lighting effects are very spectacular i can't even explain the rest. just get a Dx11 GPU and see for your self. RUNS well on my AMD CPU, i was getting between 92% and 99% most of the time. some seens it would consistantly stay at 99% for over 20 mins without dropping. I liked the cut seens and the story.

Cons: only issue i had was when i was just figuring out the new voltages for my GPU on this game , everytime i had to reload the game i couldn't skip the cut scenes ; which is sorta nice so you don't skip it by pressing exit when trying to get to the menu , but still can be anoying , anyways doesn't deserve to have an egg taken.