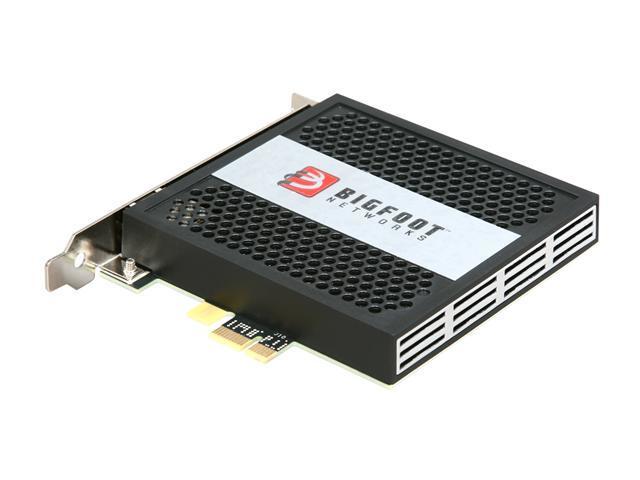 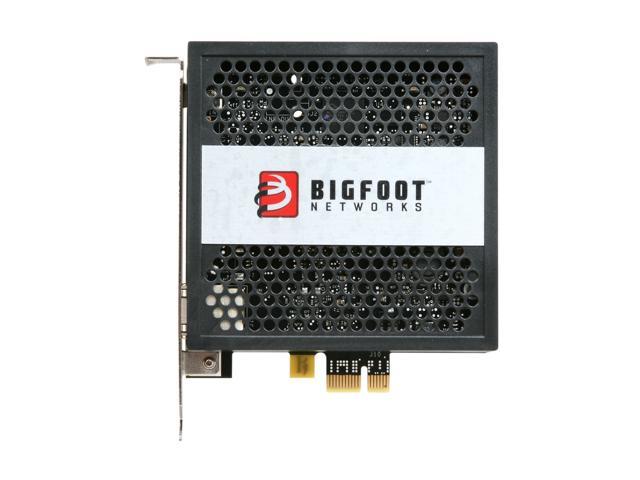 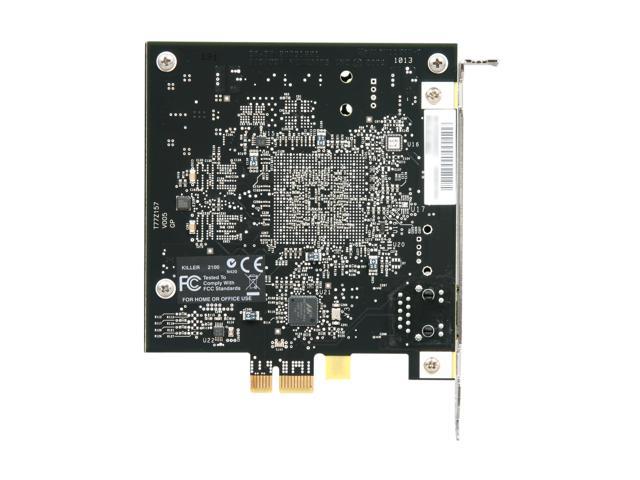 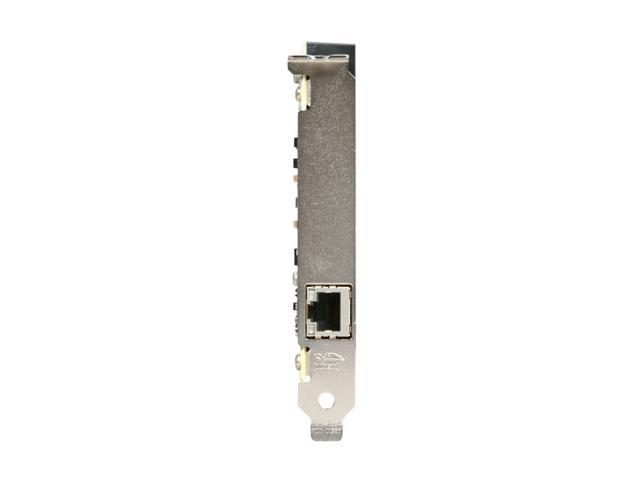 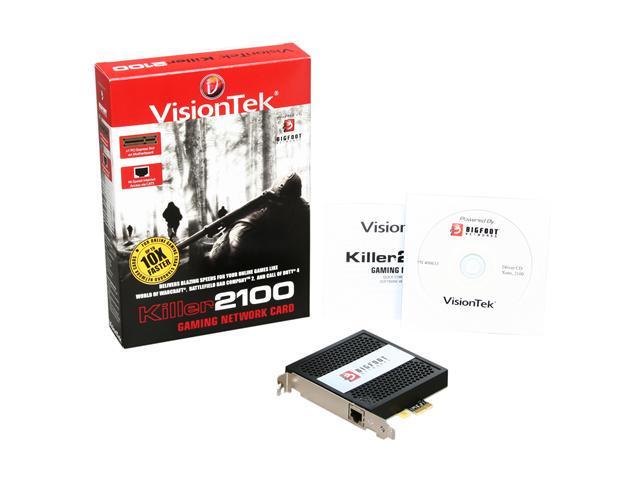 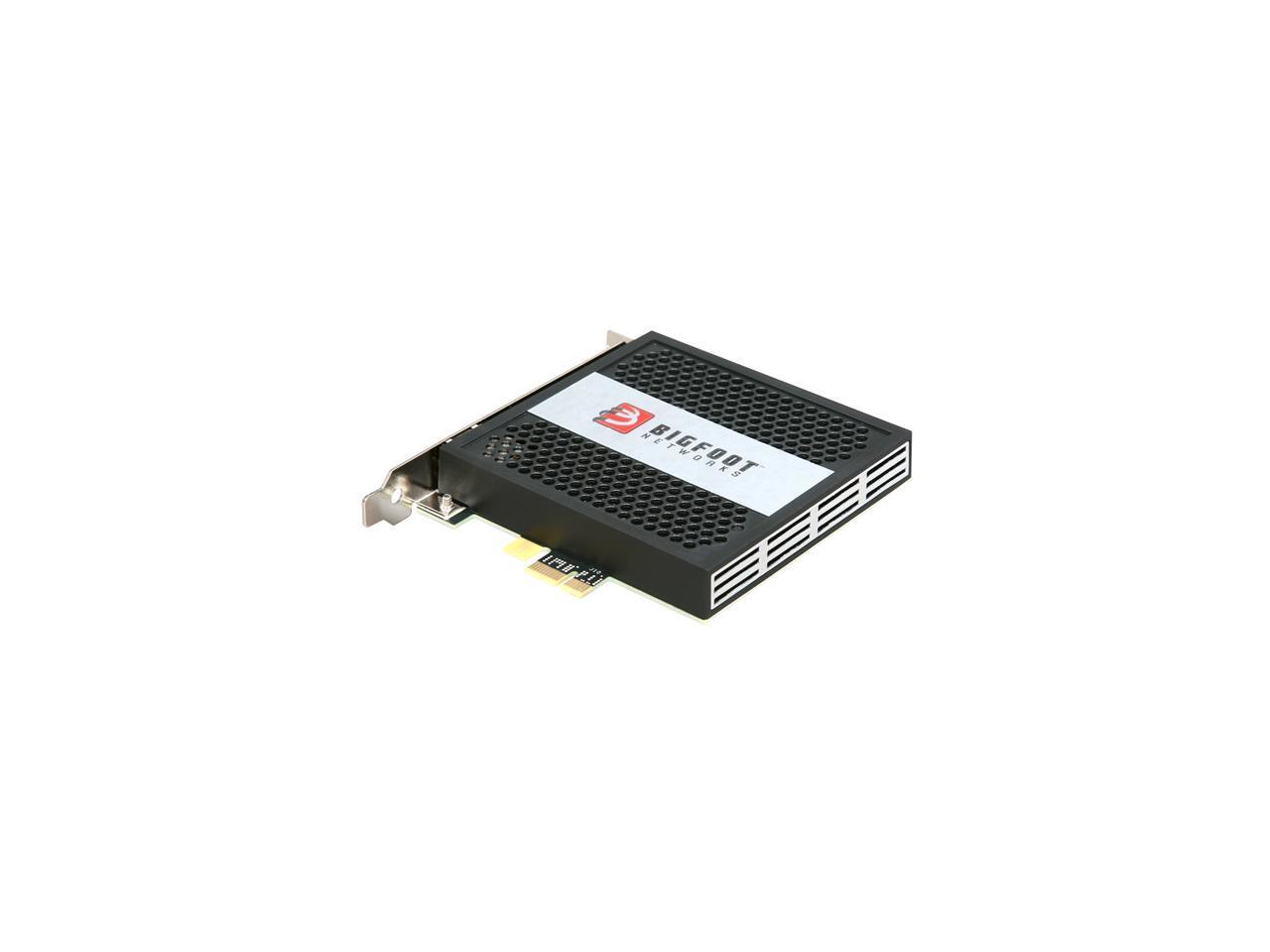 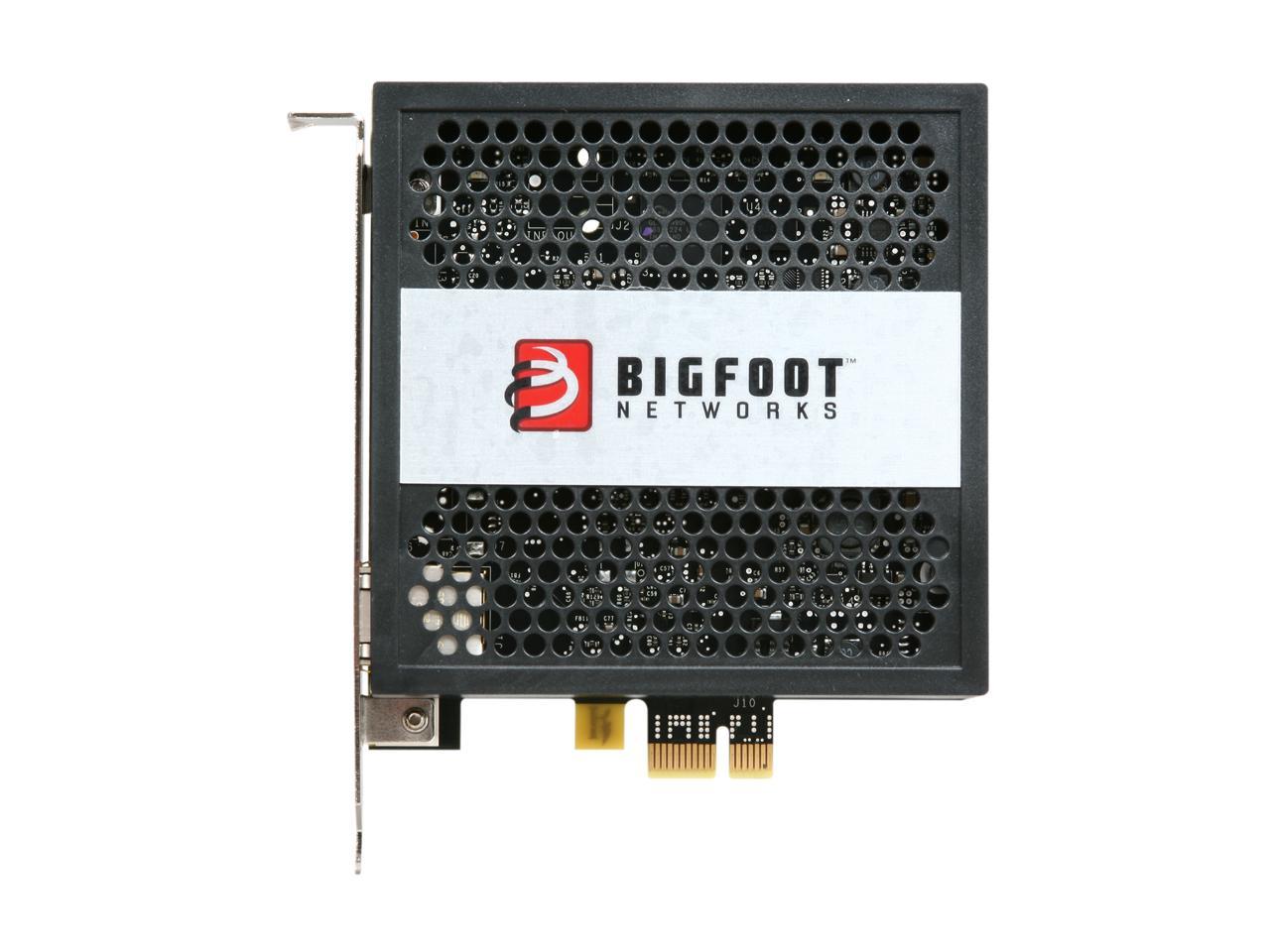 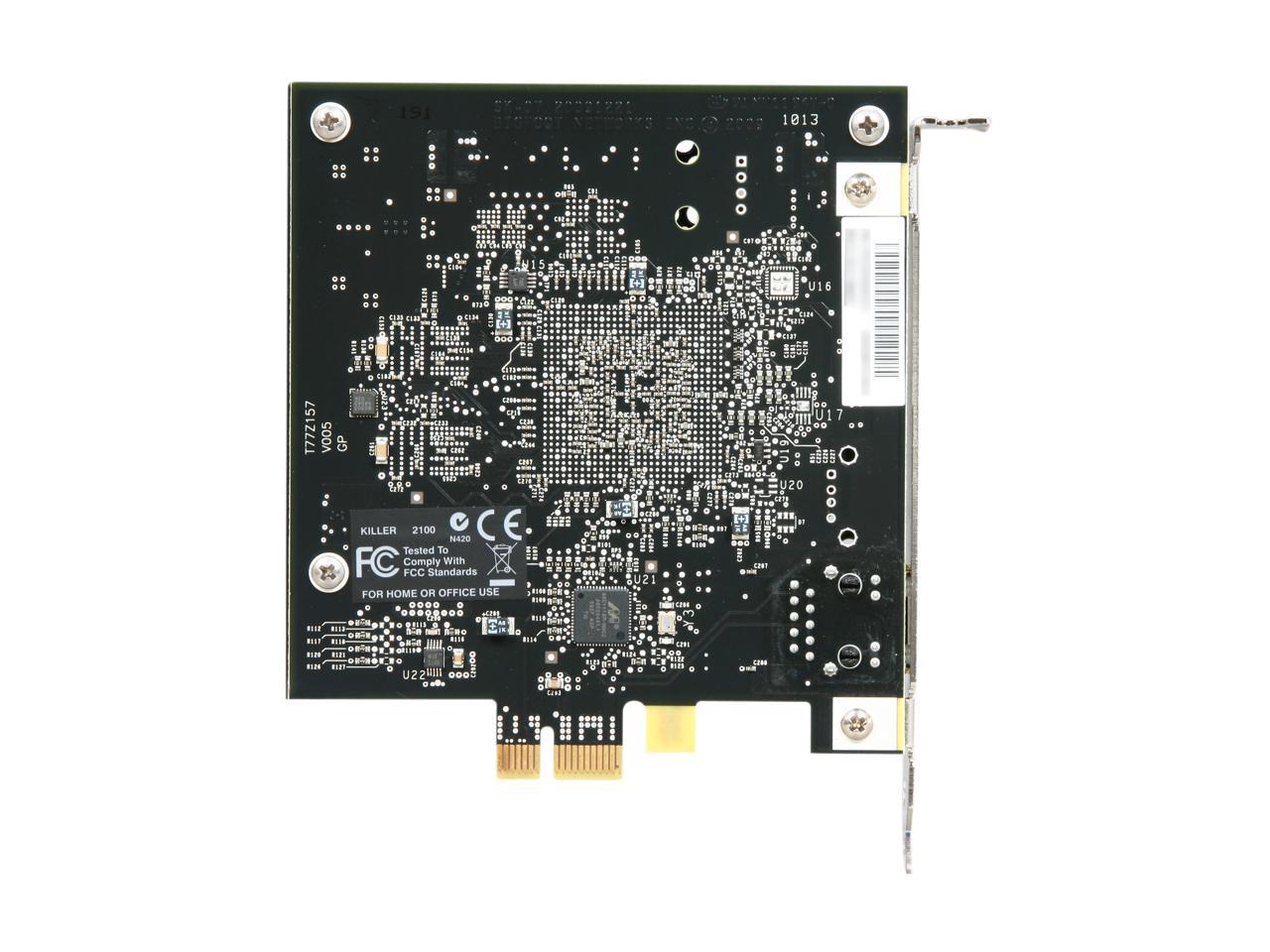 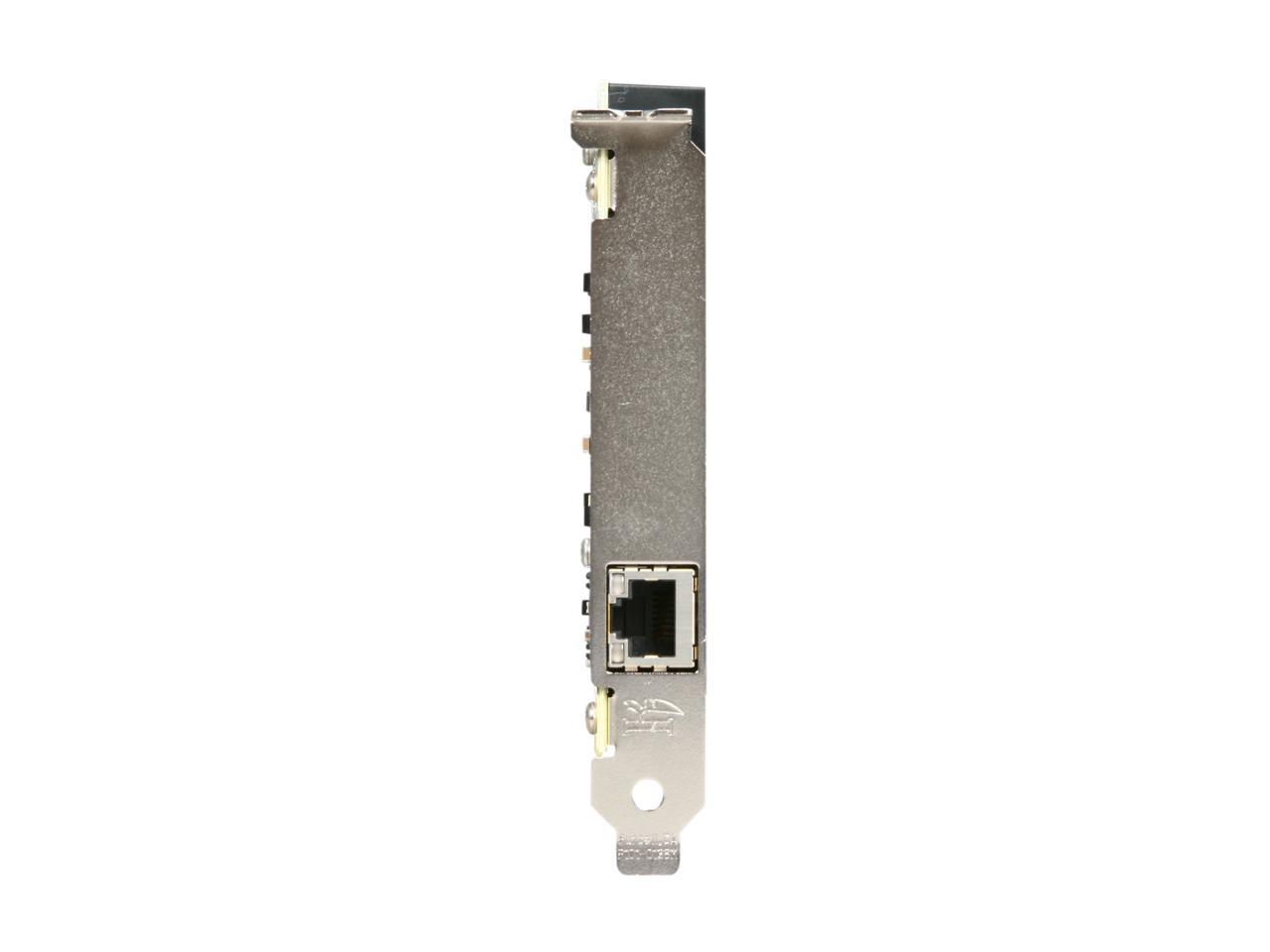 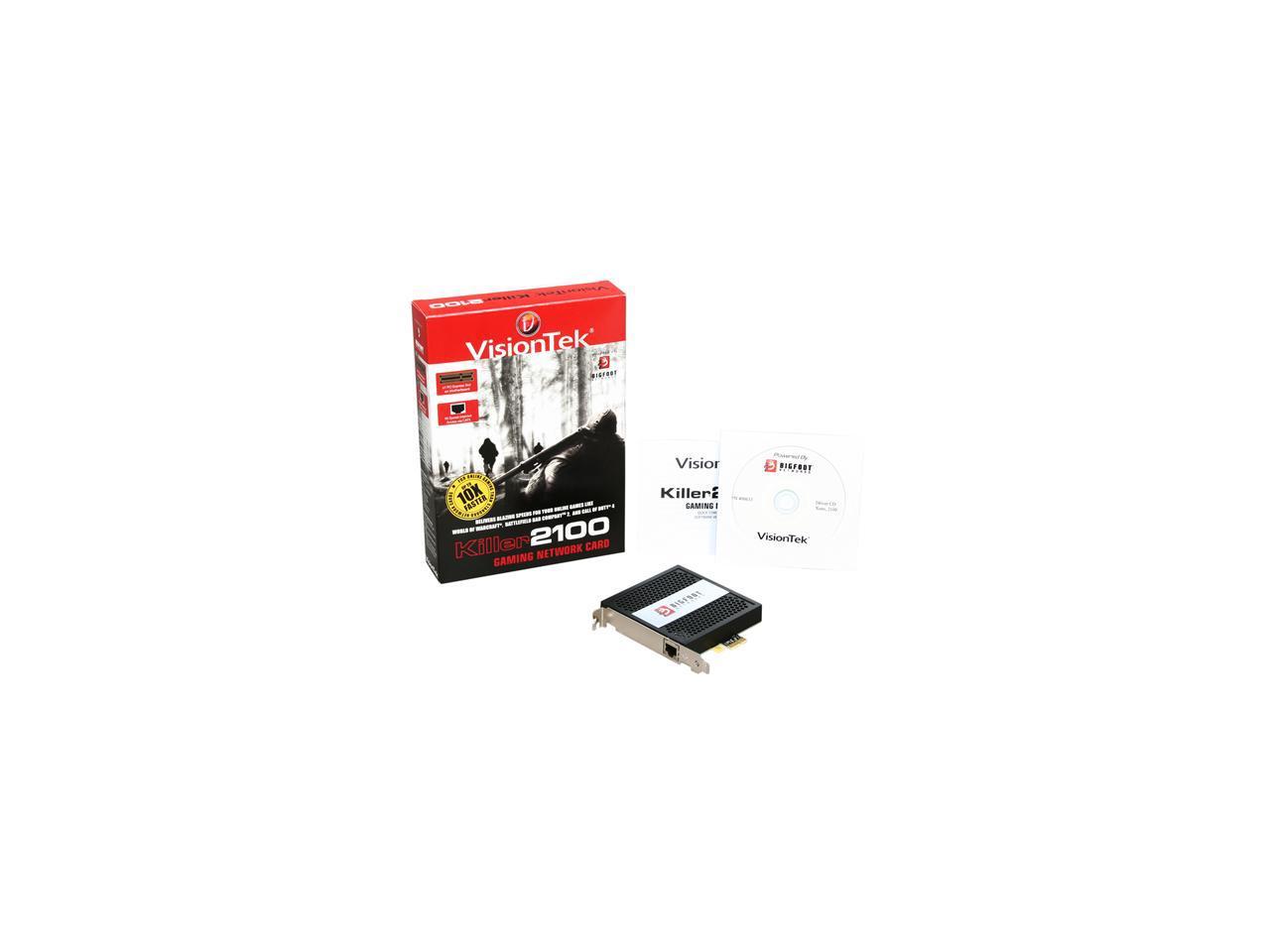 Learn more about the VisionTek 900317

Pros: while in the game it does feel like i get a slight advantage. its not enough to turn a noob into a pro, but it does help balance out the advantage that the players with a really low ping have. I'm no longer getting knifed by players that are a mile away. i looked through the metal mesh on the front and side of the card.. there is not any electrolytic capacitors on the card. that means this card should not be as vulnerable to heat as a regular card is. and the card should outlast pretty much everything else in your computer. it should be perfectly safe to place this card between or around video cards that generate a lot of heat. i did about a hour of gaming over the internet then quickly took the side off my case and touched the metal housing on the card, its not any warmer than the air in my case.

Cons: i wish the software that came with the card was more informative of the detailed options you can set. the software performs a test to set up the settings for your connection.. odd but it is saying i have a 35.17 (Mbps) connection.. which cannot be true. i have a 10mbps connection. which i have never seen go above a 2Mbps download. Update 9-30-16 some games have problems with this card. I am unable to play GTA-V or Age Of Empires 2 Over the Internet With This Card. I had to replace this card with a Intel Network Adapter to Play Those Games.

Overall Review: my in game pings did not change much, but i'm noticing some funny differences... i went to speedtest.net and benchmarked my internet connection with my standard old nic, and then did it with this card once i changed them out.. only my upload is quicker by exactially .06 mbps. but my internet downloads did not change at all. but while browsing the web, internet pages seem to complete and open faster. but my old nic was from 2005, so i don't know what kinds of hardware improvements have been made since then. however when i'm in a game and at the server browser, while looking for a game to join, some pings are much much lower. in quake3 arena a server that did show up with 53 ping now shows 1ping. now when i actually connect to the server and get into the game itself. the ping is the exact same as it was with the standard old nic. I will post another review with the same name if i run into any problems in the future. I just got the card today :D

Pros: Setup was a breeze! The Killer Network Manager has some really cool dashboard features as well: bandwidth limiting, application prioritization, and some nifty monitoring tools. My pings in Bad Company 2 went from ~130ms to ~90ms, and my World of Warcraft pings dropped from 226ms to 80ms. My connection just feels 'better' overall.

Cons: The PCI bracket on the card seemed like it was a bit too short for the card to seat properly, but everything works fine.

Pros: I had a significantly lower ping as well as latency rate which gave me an advantage in most of my games.

Cons: Price could've been lower The Red LED light. Won't speed up downloads if you're wondering.

Overall Review: Good thing I got rid of my Killer Xeno Pro right as this was about to come out. Otherwise I would've gotten a quarter for it.

Pros: *It looked cool sitting in my case. *The user interface was well made and detailed. *Being able to turn the red light on and off was nice since i have Blue LED's in my case. *It was an easy install.

Cons: *I just didn't see the performance. *I had a problem with TF2 where my character would get stuck in one place, but I'd see everything else happening realtime, but I couldn't do anything or move from where i was. I pluged my Cat5 cable back into my Mobo's network and it does not do it anymore.

Overall Review: *Well... I do have a higher end computer and fiberoptic internet so that could factor into it. *I bought it because i've been curious about it and it was on sale for like $86. *It just didn't amaze and dazzle me like I thought it would. *I didn't want to give it a 1 or 2 egg because the software was really well made and it did connect me to the internet, but it just didn't improve my gaming experience.

Pros: This card supposedly overrides winsock, which in my mind is a pro by itself. I loved the bandwidth control, since I have family that uses bandwidth also with wifi devices and Pandora internet radio. Though I can only adjust bandwidth from my computer itself, need the gaming router to adjust my families devices. I love mostly, the lower ping and lack of lag spikes that I was used to having with my onboard NIC. Software (works) fine. Increased my pring from 58-65 to a low 13-15! According to Speedtest or pingtest.net

Cons: None that I can think of except the price, maybe that I had to update the firmware to get my computer to detect the card, however, that is only a con for novice to beginner users, not myself. This is a gamer card though, and I am sure most gamers have the required tech knowledge to update firmware. Especially since the software included had no issues auto-updating the unit for me. man people wined about the software on here

Overall Review: I just had to make a comment because of so many cry babies that claim this card barely works. Funny thing is, most of their tech levels were 5 eggs. If you don't completely know your S#i!t, don't say you do and especially when you decide to make huge comments that could cause novice enthusiast needing that extra or / I mean less latency due to cruddy ISP's, to decide and not buy this device because of you. I have decent ISP, and decent router. For those interested: -AMD 1055T CPU at stock speeds, most stable, however, some can overclock, I think I got a weak unit, no cpu is the same, just the model numbers are the same) -Ocz Gold 1333 memory CL9 timings, most dependable memory I -have ever used and meant for phenom II memory controller) -Twin Frozer GTX 560 ti at stock settings, and custom fan settings) -Cooler Master V8 HSF-I love this cooler) -ASRock 990FX Professional Fatality Edition mobo (Awesome board) same quality as Asus I believe) --only bottleneck, WD Raptor 450 GB

Pros: takes one more thing off of the motherboards shoulder, it does indeed lower ping on all games, some more than other. my ping for wow now is 18ms, which is obnoxious. if playing games like cod6 that auto choose host, you will get host almost everytime. and it looks pretty cool.

Cons: you have to make sure to adjust the tcp protocol depending on what your doing, it comes setup for throughput. but you want it changed to lower ping, so you have to turn tcp nodelay ON. and then you have to set the ACK frequencey to 1. then your good to go for gaming.

Overall Review: use the drivers off of the disc, after you install those it will link you to the website to update, then you can update. if you download the drivers right off the website but not from a link you will get extremely outdated drivers that do not work at all. also like others have said it flashes firmware without warning so be ready!

Pros: Yes, it's a really cool idea. VisionTEK put what is essentially a game console to work just handling network traffic. With a 400mhz PowerPC cpu and 128mb of ram, you could probably confuse this with your xbox. That just sounds like a cool idea. And it looks awesome. It has what I can only describe as an almost tasteful red led. Plus, the price was right. At $128, I don't know if its worth it, but if you can get it for $70 -- I'd say pick it up. IF you're using the onboard lan on your motherboard, AND it isn't one of the Intel onboard nics, AND it's not currently working... I would seriously consider one of these. If you're using realtek onboard ethernet, then its gonna die soon anyway. Pick one of these up. The way I figured it, I had to get a PCIe NIC anyway, so it was either this or the $30 intel. This was over twice as much, but almost purely on the idea of the Network Processing Unit and the asthetics, I figured it was worth the $40 upcharge.

Cons: I don't really game online enough to make it worth it. But I noticed with the onboard realtek (when it worked), that it used a not insubstantial amount of cpu when downloading and streaming videos. Just doing a speed test on my ISP would peg one core of my Athlon II X4 3.0gHZ. So, I like that I have a whole other computer, inside my computer, just handling packet patrol. But seriously, its not worth the full msrp. It awesome, and it is certainly an improvement in almost every way over onboard lan (that isn't Intel. Most intel boards don't even use intel GbEthernet). You aren't going to get a massive difference in anything. At the current price, its not a bad deal, but still more than I think it should be.

Overall Review: It's the cream of the crop as far as NICs for gaming machines go. There really isn't anything else like it. It's a great idea -- use a dedicated CPU and RAM running linux, to bypass windows' own TCP/IP stack. It actually has resulted in higher maximum download speeds -- unless my ISP decided to give me an extra megabit at exactly the same time I installed this card, though I'm not sure why this is. I don't think this card should do that, but I'm not complaining. All the same, its some good hardware, and if they would market it a little more as a high end NIC, and not just some gaming gear, I think it would pay dividends. A good idea, with good execution, decent network management software, great looks. The current price is way better that the 130 bones they were asking, and as long as you don't expect to much, you won't be disappointed. If you spend all day playing WoW, or TF2 or CS:S, it couldn't hurt to have.

Cons: Takes up a PCIx slot, but that's unavoidable.

Overall Review: I have a high-end PC so I don't notice the claimed FPS boost or load removed from the processor.