Purchases from these Sellers are generally covered under our Newegg Marketplace Guarantee.
7,453 Ratings (90% Positive)
Sold and shipped by:

Wavlink TechnologyContact Seller
This product is sold direct from the manufacturer.
Ships from United States.
7,453 Ratings (90% Positive)
On-Time
Delivery
92.19%
Product
Accuracy
94.74%
Customer Service
Satisfactory
91.78%
View All Seller's Reviews
This item is currently out of stock and it may or may not be restocked.
Out of Stock
Add To ListFound on 3 wish lists 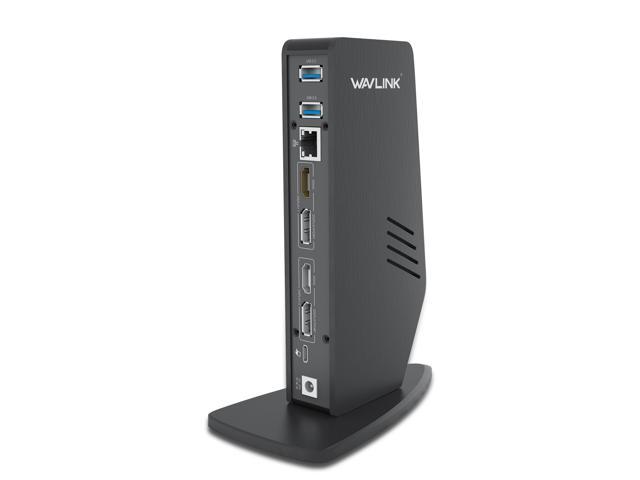 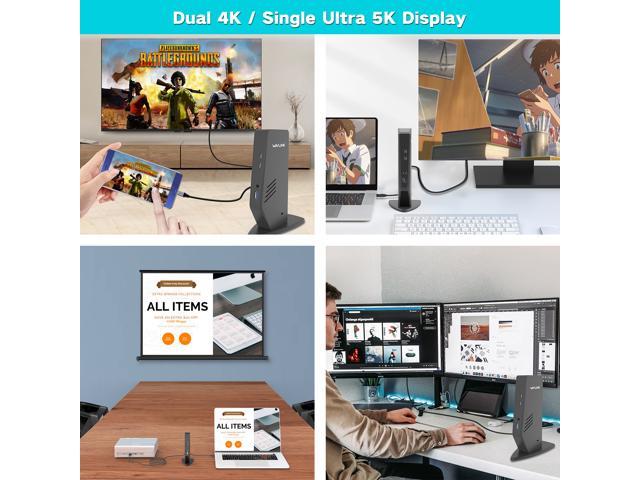 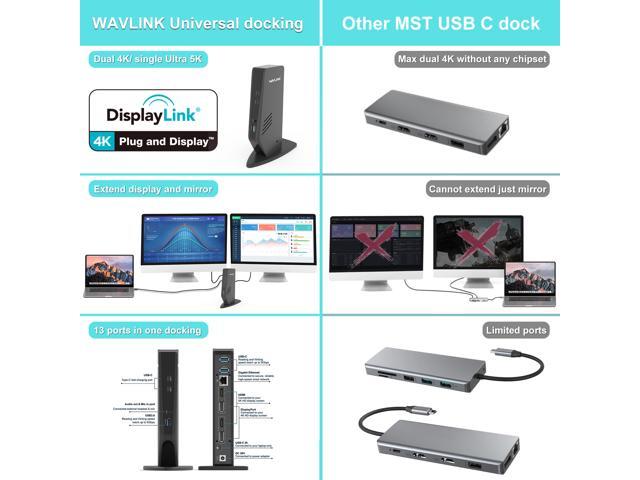 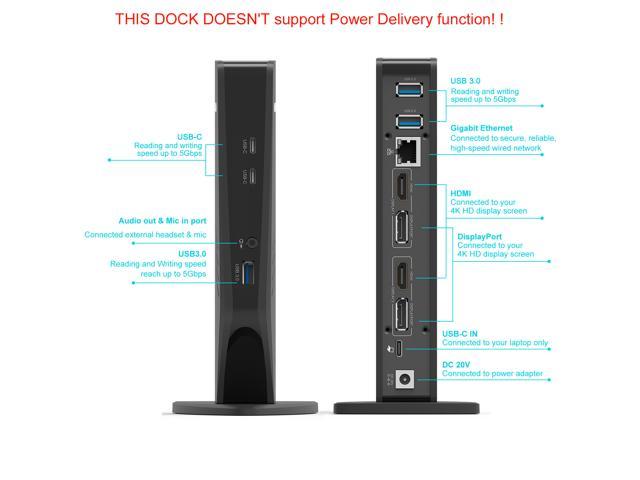 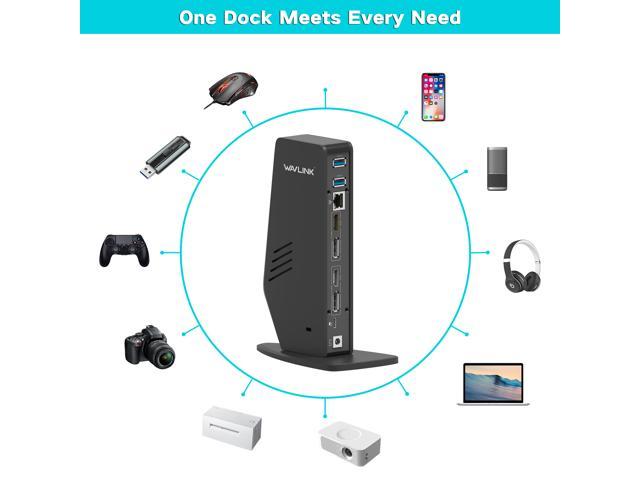 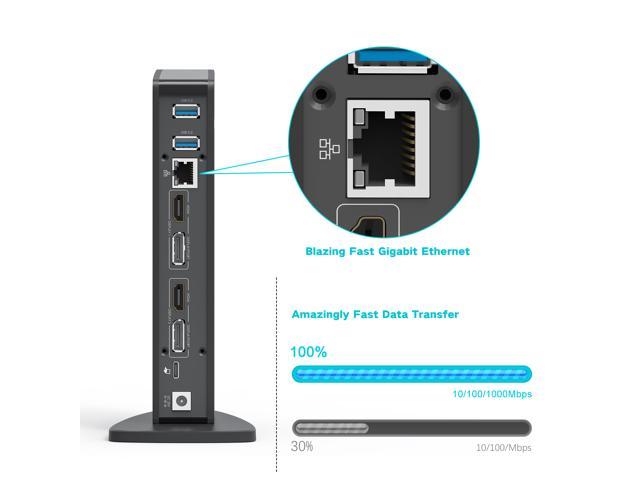 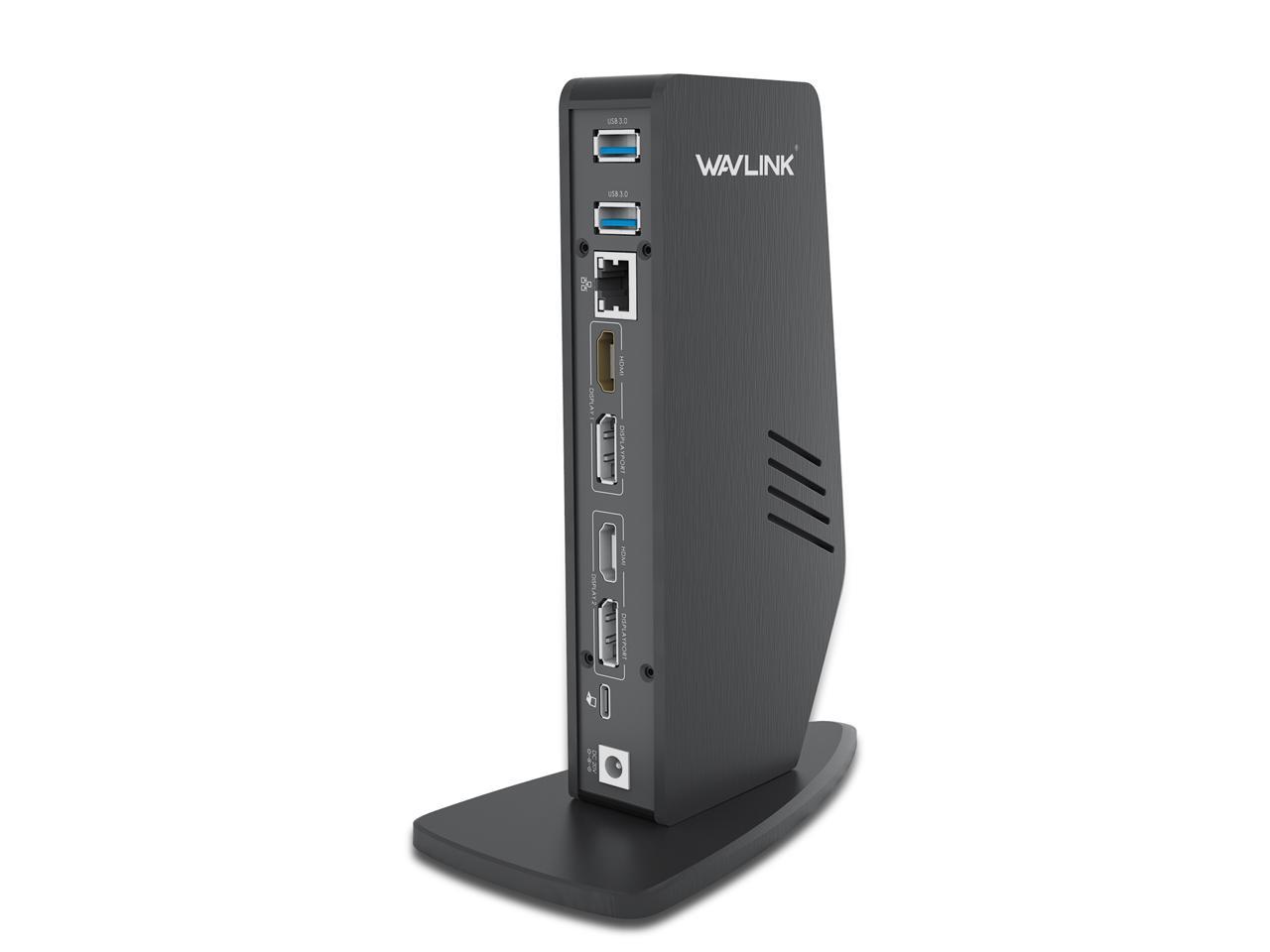 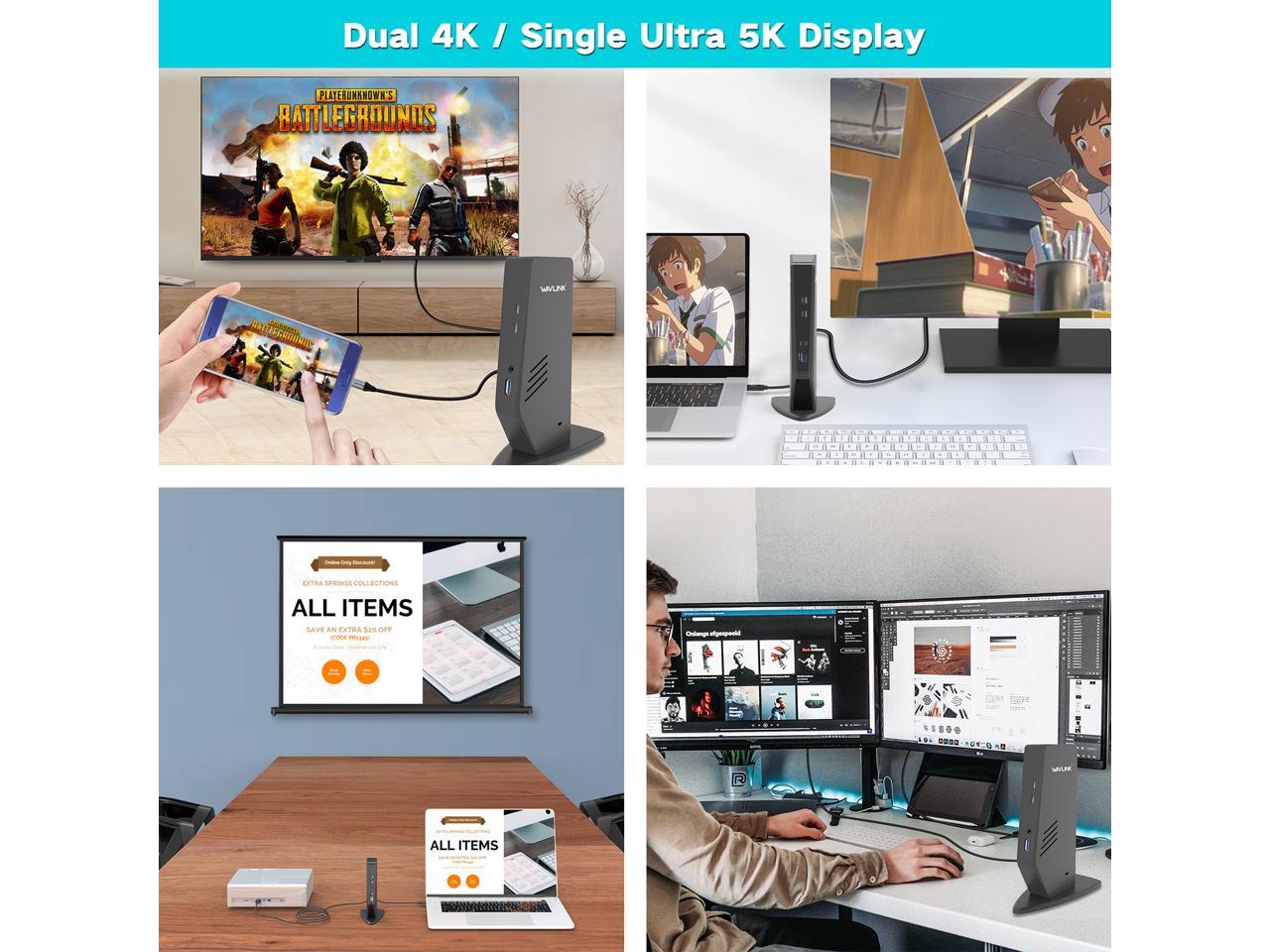 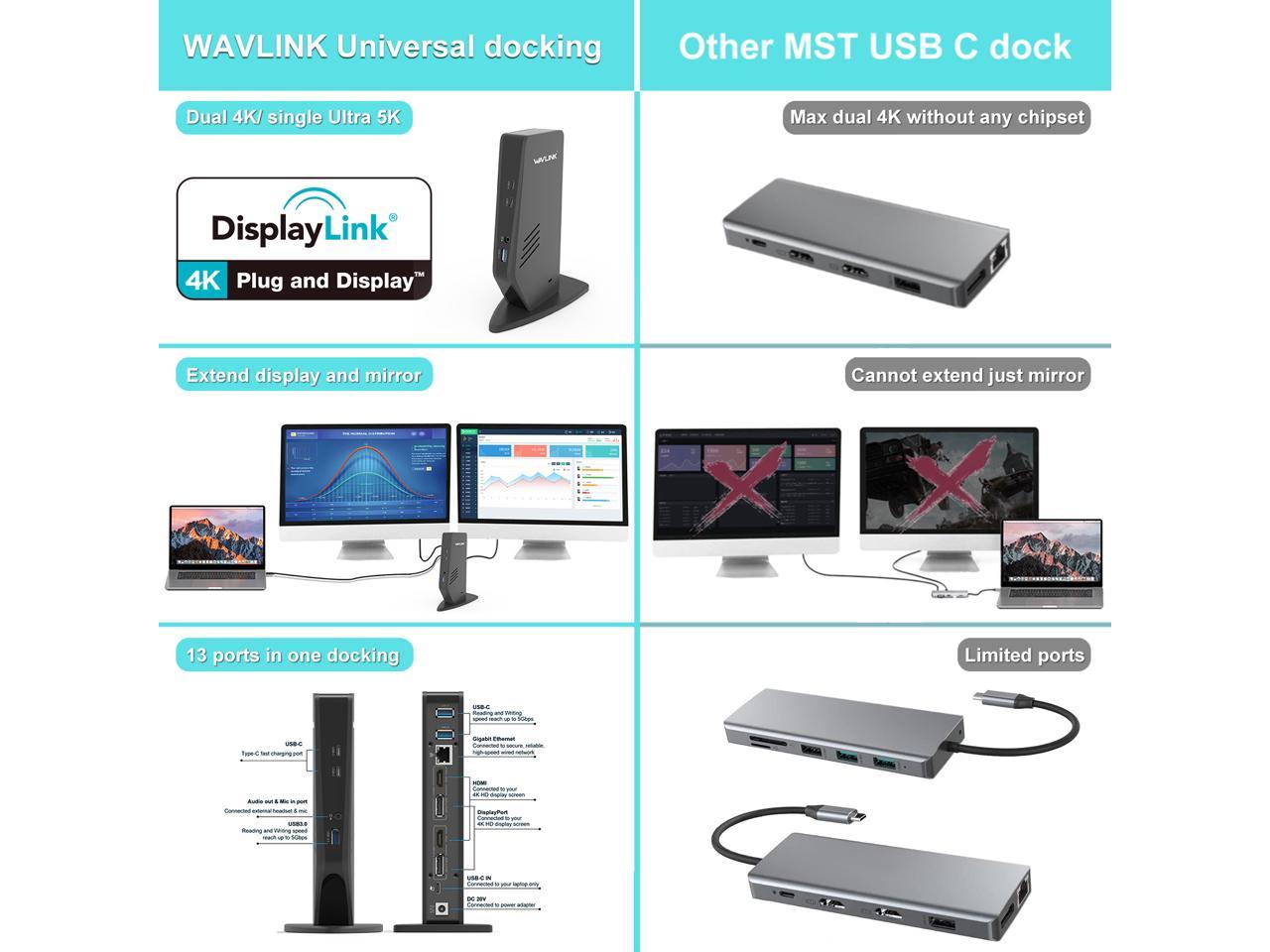 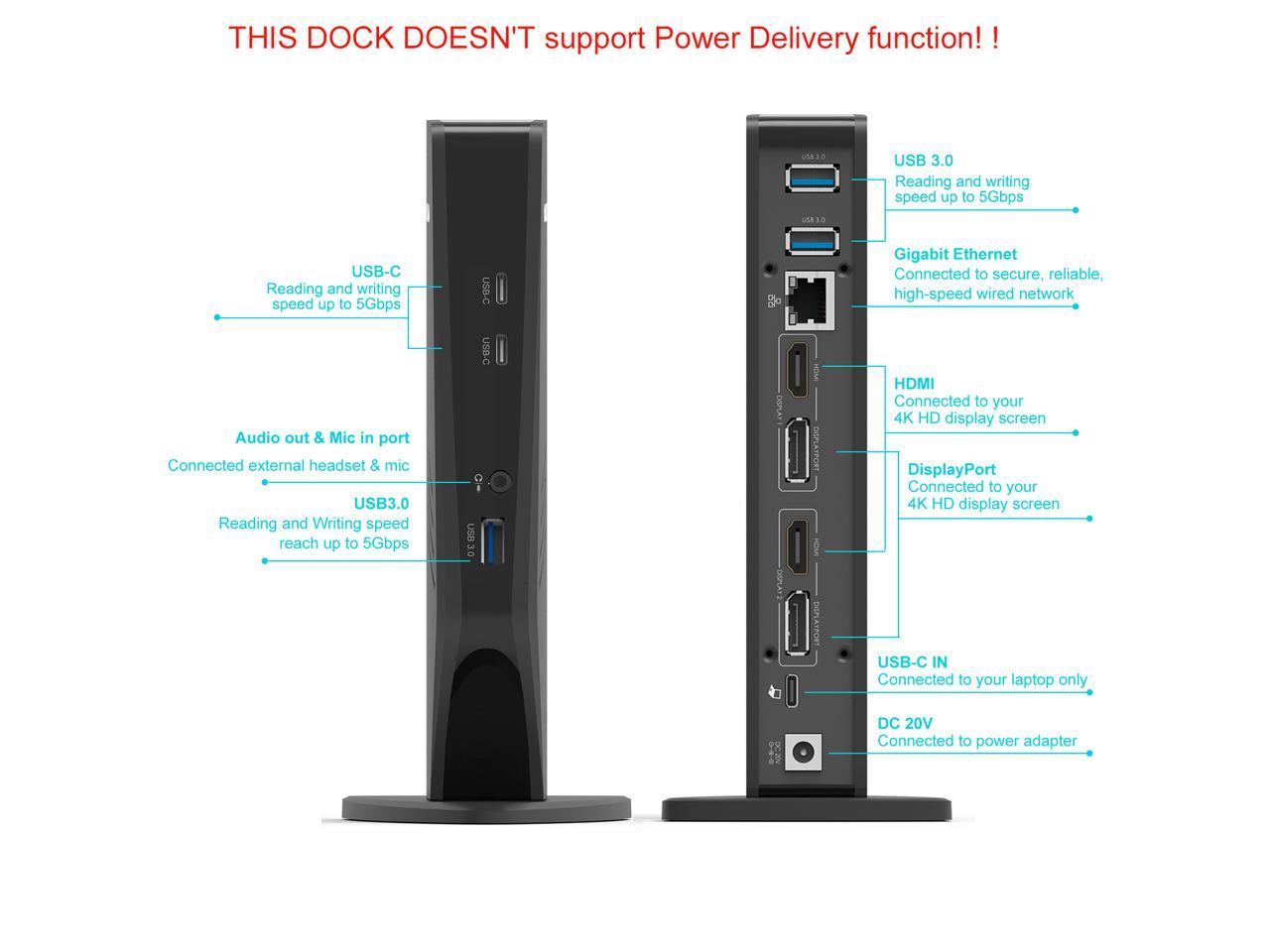 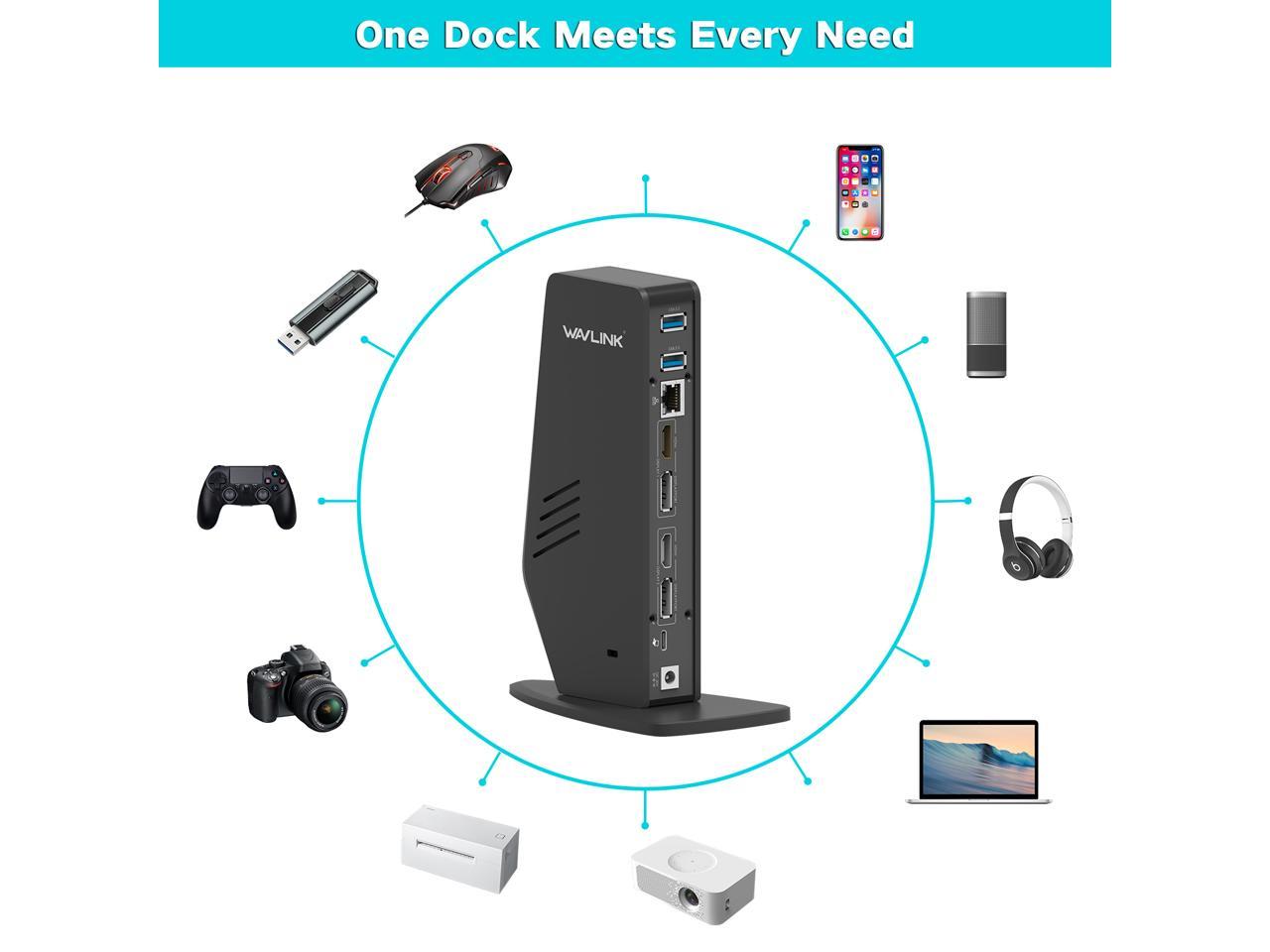 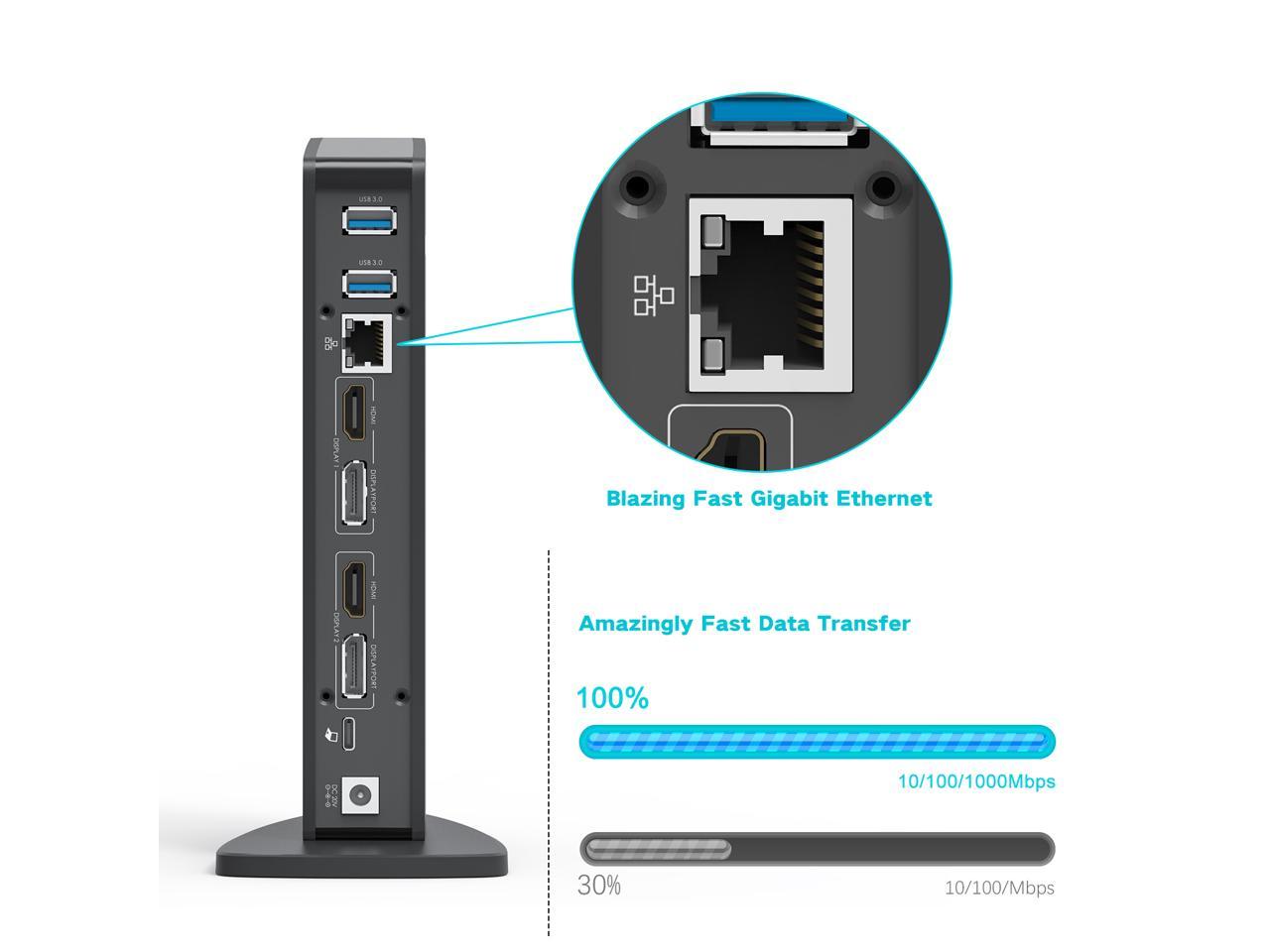 Get all the benefits from this docking station, Create a more efficient home office.

Unique plastic wire matte vertical design, The new USB Type-C connector works seamlessly with this Ultra HD 4K Universal Docking Station. It can connect to any host with Standard A or Type C connectors providing a fully backward compatible and future-proof docking solution. Allow you to connect up to two additional monitors and seven accessories through a single USB cable. Including the latest drivers for compatibility with Windows 10, 8.1 and 7 or Apple Mac OS.

NOTE -This dock do not support charging pc ! 3 x Type-A + 2 x Type-C ports compatible all USB 3.0 and USB 2.0 devices.Allows you to use them at the same time. Sync a whole photo album or music library instantly with the high speed of 5 Gbps data transfer.Get faster speed with less expenditure. 3.5mm Audio port ideal for connecting a wide variety of devices including headphones with and without mic, speakers, mic system and so much more. - 2.4Ghz wireless devices, such as wireless keyboard and mouse adapters, may not works well on USB 3.0 ports, connecting to a USB 2.0 port is recommended.

-If playing UHD content (4K), the system must be capable of decoding the 4K video in the graphics processor.

-New 10.0 version can not support Dual HDMI 5K display,other OS system such as win8 will not support

ANDROID and CHROME
ANDROID: Available on the Google Play Store. For Android v5.0 (Lollipop) or Later

Learn more about the Wavlink 69DK5

Pros: -MANY usb ports. -Support for multiple Monitors (both d.p. and hdmi) -Compact -Easy to set up (literally just plug it in)

Overall Review: So, I purchased this for use with my work computer. My work computer is a Dell Ultrabook. It's a 12.5" laptop with a dual core 8th gen I7 in it. It's not the quickest machine, but it is solid for work related stuff. I run dual monitors at my desk, along with two USB hard drives, a mouse and keyboard, and a fan mat that sits under my laptop. I also have a printer connected via USB. I plugged this in with windows 10, and windows took care of everything. I did not need to go find any additional drivers or do any additional work. I would suggest plugging it in by itself first, and turning it on. After windows has set it up, feel free to connect items to the docking station. So far, it has been pretty solid. Even my speakers work flawlessly. I have the speakers connected to the back of the monitor via a 3.5mm connector. So, the docking station/windows automatically figured out to send the audio through the docking station, down the HDMI, and then subsequently, down the 3.5mm audio jack out of the back of the monitor. Honestly, I think that impressed me the most. I didn't have to change any settings, it just worked. The only issues I have had is some unreliability as the temperature has increased. And, not by a lot. right now it's 78F in the room I'm in. It's not crazy hot, but a little warmer than most electronics would prefer. Earlier today I had an issue with one of the USB drives. It started connecting and disconnecting randomly. I did have the two USB drives sitting on top of the docking station. I disconnected both, reconnected them, and relocated them to let the box run cooler. Since then, no issues. Then, yesterday, while working I had a hard crash. Windows entirely locked up, the sound was stuck on some gosh-awful buzzing sound because the youtube music I was playing crashed. The whole thing just crashed hard. This may have been the PC, but I have a suspicion it was the docking station, as I have never had that issue with the ultra book in the past. So far I've been using it two weeks and have only had those two incidents. I would say, overall it has preformed better than I expected, and connected easier than I ever dreamed. I would absolutely recommend this device. The only reason I didn't give it 5 "eggs" is because of the instability.

Pros: - Able to have 2 extended desktop external monitors on MacBook Pro - Drivers exist and works for macOS 10.15.7 Catalina - Dock only a little bit warm on full load (external ssd, and 2 screens playing 4k videos) - Ethernet connected to USB3.0 bus internally - some bad hubs fallback to usb2.0. - A lot of USB3.0 pots - and no any usb2.0 ports is a plus - not waste of space on front/back panel. - Full 5Gbps speed USB ports, external SSD gives 450+ MB/s

Cons: - No laptop charging functionality. Original MacBook charger is better so ok anyway. - No SD/microSD card slot. But it have a lot of USB3.0 ports so i connected external one. - Power supply cable too short as for me.

Overall Review: Using it for my work from home fully. Tried a lot of other possibilities to have 2 external monitors on MacBook and only this dock station with DisplayLink work as i want for this! External monitors doe not work at all without driver. I downloaded driver version 5.2.5 from wavlink.com website for WL-UG69DK1 for macOS. It supports latest MacOS including macOS 10.15.7 Catalina, which i have. All works ok. All other peripherals like Ethernet port, USB3.0, audio in/out works ok without additional drivers.

Pros: Everything worked right away, both HDMI ports, LAN port, and the USB ports. The two screens I have plugged in are both 1080p and there is very little lag. You could definately play games on it as long as they weren't especially timing based.

Overall Review: With the physical size of this thing, it would be nice if there were a some more USB ports and perhaps a serial port or MicroSD card slot

Overall Review: This Docking Station is Just what I needed to use with my 2 24" LED Monitors and my ASUS PC LapTop. It all works very well with plenty of USB Ports.

Pros: The best docking station I have ever used. Works seamlessly for my work laptop and my 27" monitors. With HDMI and DP outputs and enough USBs to handle all of the peripherals.I connected this with a peripheral switch as well to switch between Desktop and my work laptop. All the other docks out there seem to provide only one or one with an HDMI that you have to end up buying another dongle/adapter to make it work. I don't know of anyone who has one of each monitor, so having one of each seems a bit odd. If you are going for dual monitors, usually you have one or the other, and Wavlink got it right. They also got it right when it comes to setup and installation. I am using Windows 10 and I literally plugged it in to my computer and watched the device drivers get added automatically. I had to do absolutely zero configuration and installation steps, it just worked out of the box plug-n-play! I know there were updated drivers on the Displaylink site, but I didn't have to do it...everything just worked! As for the displays, it actually seems like they became brighter and more clear than they were before. I have 2 DP displays running at 1900 x 1200 and the laptop running as well. The text was clear and I could not make the screen flicker or show glitches no matter how much movement I did on the screen, load down the Gbps Ethernet, or try to overload the dock. It all worked flawlessly.

Overall Review: I highly recommend this Wavlink dock. For office work, development, graphic editing, videos, etc. this dock is more than enough to keep up with the tasks with room to spare.

Pros: It works well, and it's silent. I like the single cable docking with my laptop.

Pros: I no longer use desktops these days. I have three (3) laptops at home and at work I also have a laptop. Although laptops are convenient due to their portability, I would need a laptop docking station to have more connections and also to ensure my connected devices are having enough power. This universal docking station USB type C by wavlink appears to meet my needs plus additional connection for display and Gigabit Ethernet and more. So I bought it from wavlink/newegg. The item arrived quickly in 4 days in a nice shrink wrapped retail box. The content include a docking station that is solid and nicely designed, 2 USB cables (A to C and C to C), a Quick Installation Guide, 1 software installation CD, and 20V power adaptor. The docking station has 6 USB 3.0 ports that are plenty for connecting a few external portable hard drives and flash drives for storage of my important data and for scheduled back up of data. I 2 external hard drives and 2 flash drives to the docking station connecting to my laptop and the devices are recognized and work seamlessly. I set up the 2 HDMI ports for dual screen setup and it works beautifully. There are also 2 display ports that support up to 5K monitors. I have not used them at this time but 2 DP ports are really nice. For my HP laptop at work, the OEM docking station only has 1 DP and 1 HDMI. The 1000BASE-T Ethernet works as expected as it is a standard for laptop docking station. I connected the audio out to the speakers and the microphone in to the microphone and voila` I have a complete system for multi-tasking and productivity. Even OEM docking station cannot match all connections this device provides and often OEM would cost more. I really like this docking station and would recommend it.

Overall Review: Yes definitely recommended for people who use laptop and need the multiple connection capability of a desktop at home or at work.

Pros: Works great and easy to setup. Besides the usb cable you need to connect to your laptop, they even include an extra usb cable. Works with two monitors, a printer, audio, external drive, and a network cable.

Cons: This is where I feel I am getting really picky and hesitant to say anything since it is a great product. 1. Cable on power supply can be a bit longer. 2. Should have made a suggestion in the directions how in Windows you can set up your laptop to keep operating when it is plugged in and top is closed.