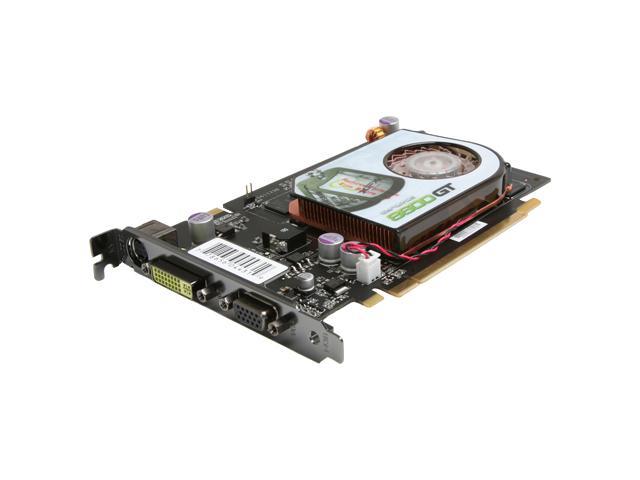 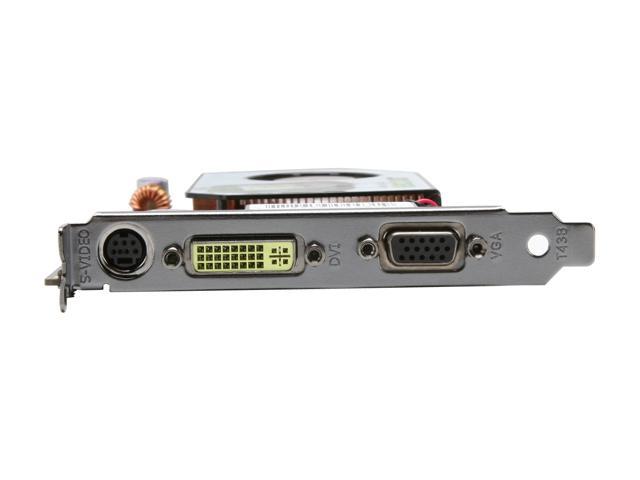 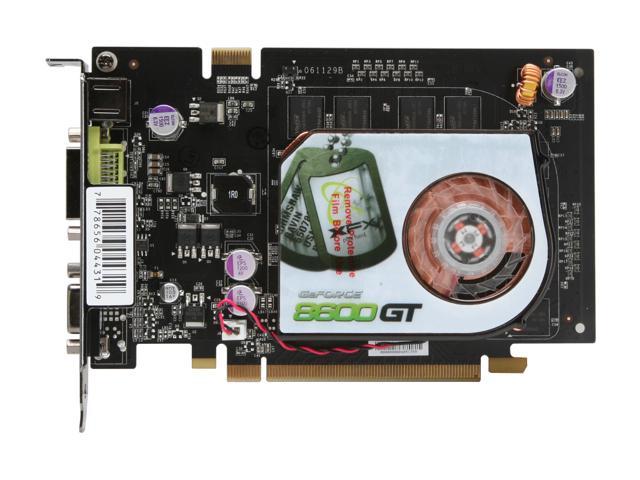 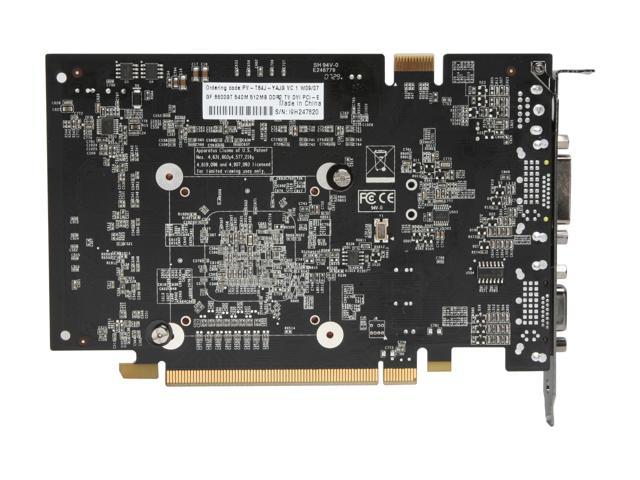 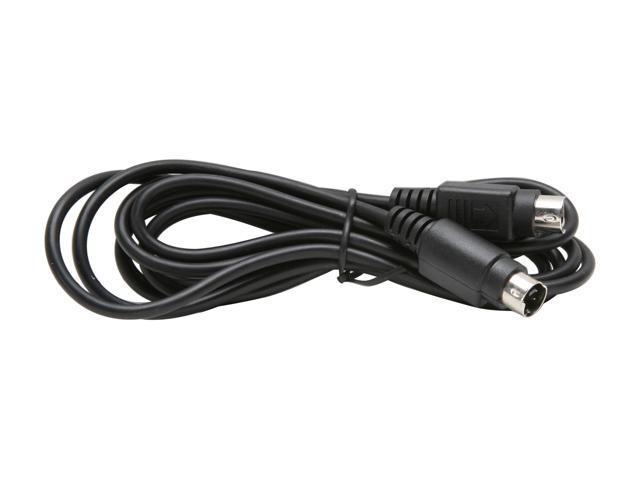 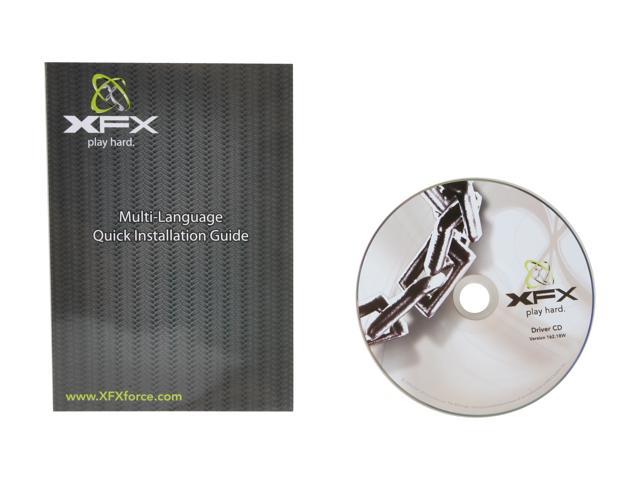 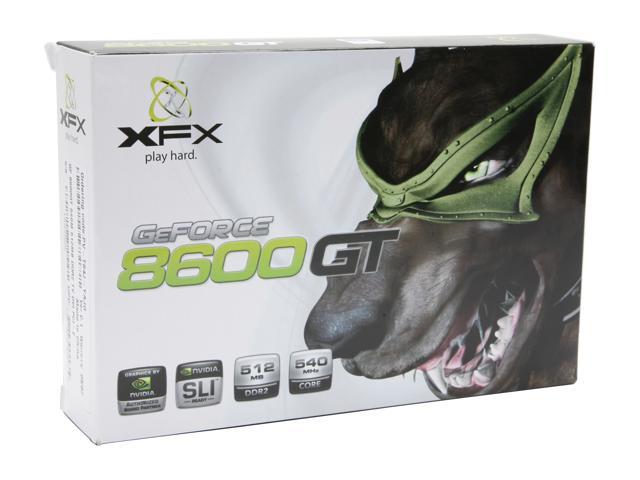 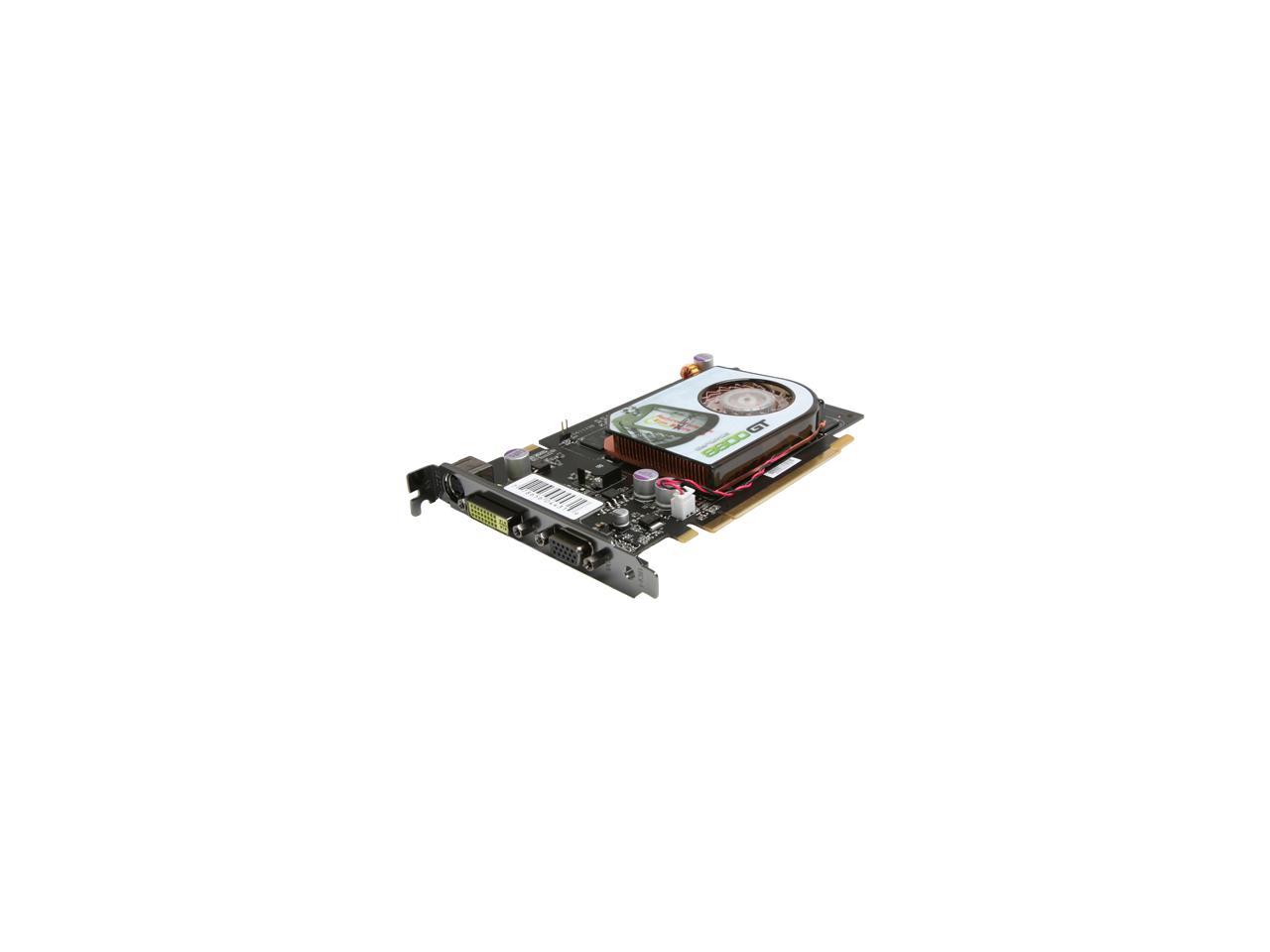 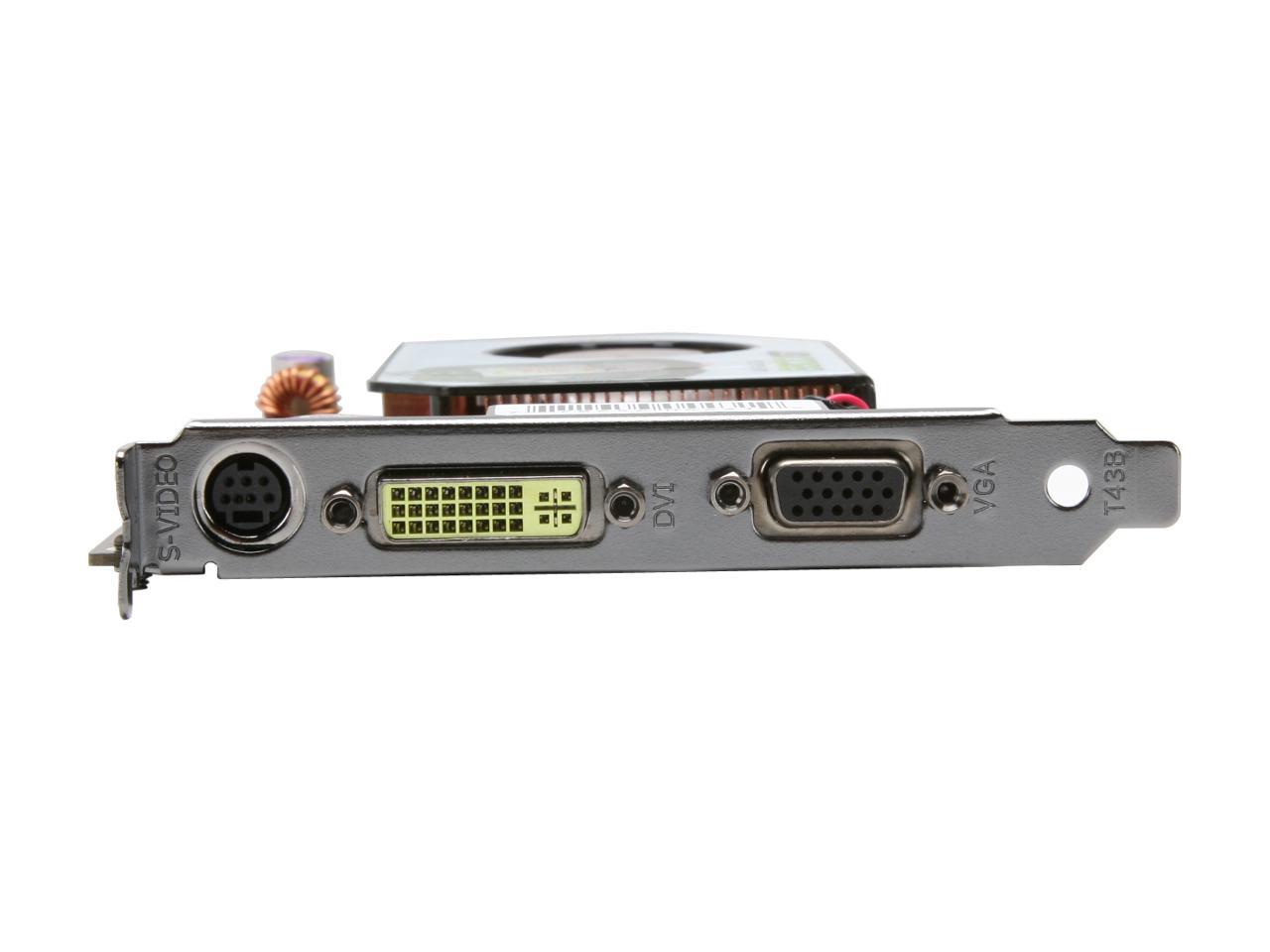 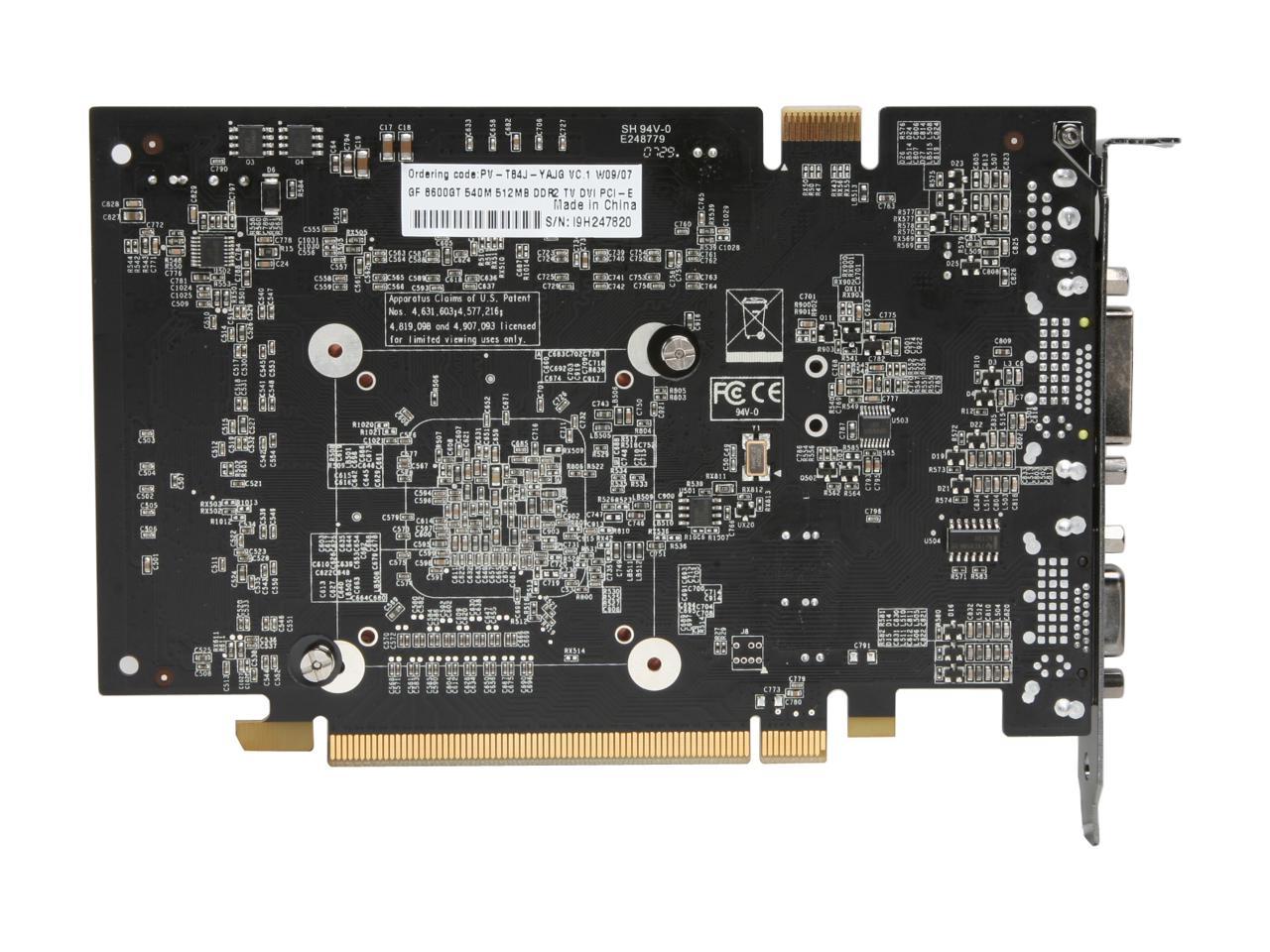 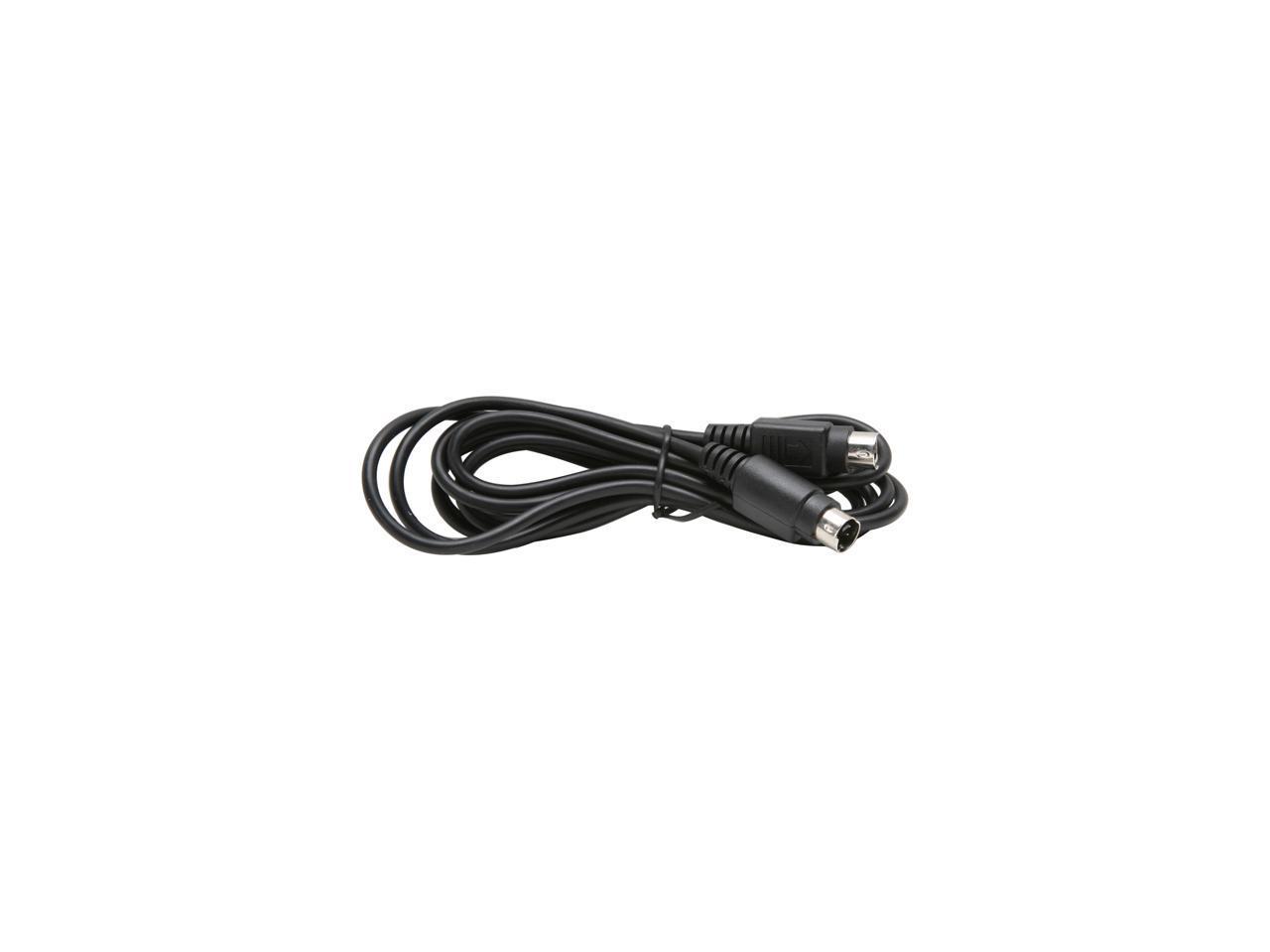 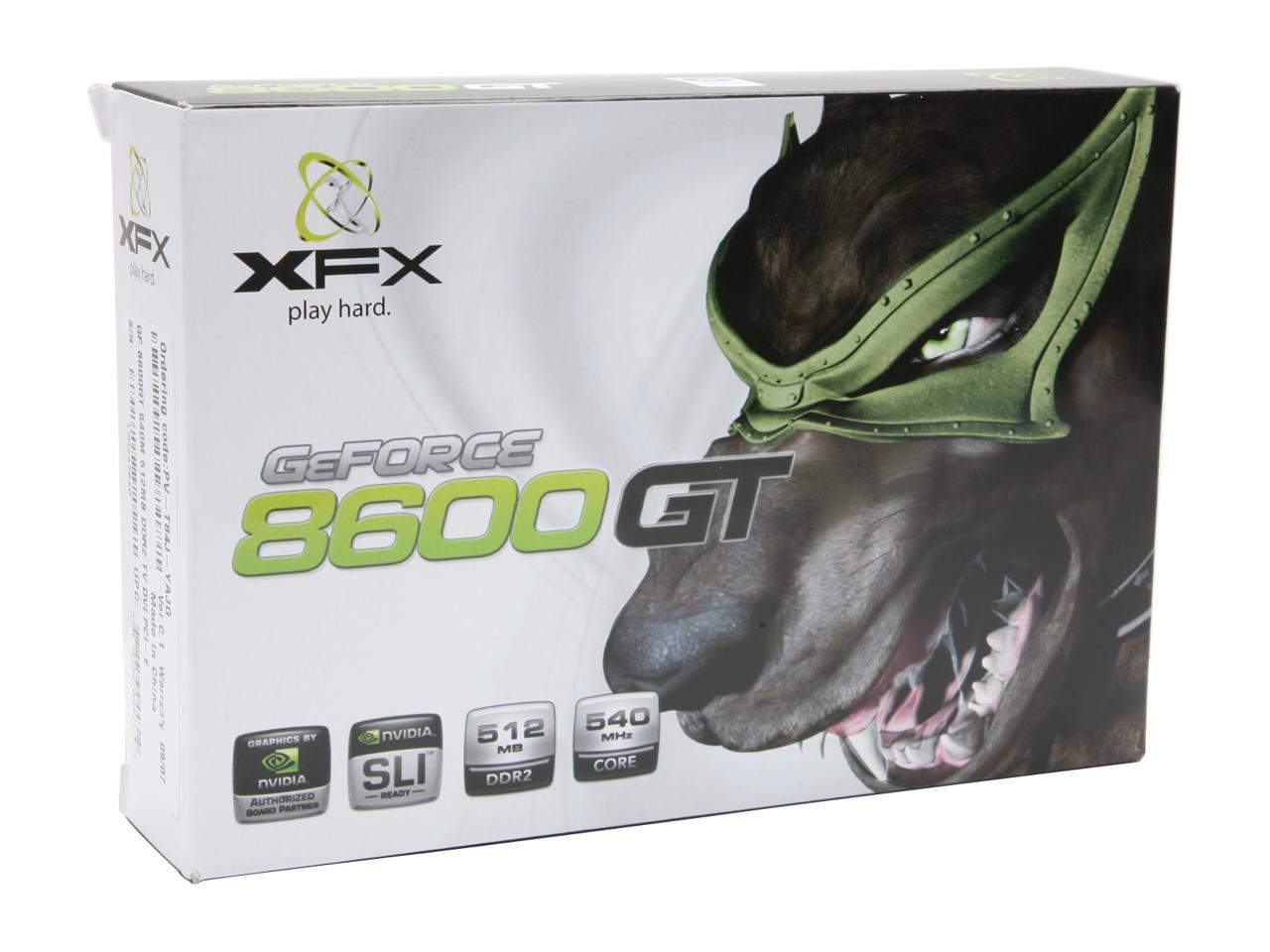 (265) Write a Review
In stock.
Ships from United States.
Most customers receive within 2-8 days.
Specs
Reviews

Learn more about the XFX PVT84JYAJG

Pros: Runs Gears of war on max settings with little to no lag. Runs COD4 very high without a problem at all.

Cons: I wanted to use this for my buddies HTPC setup. When we got the card it would not post to any hdtv, just an LCD monitor. So I toyed around with it for a week or two and then e-mailed their tech support. They basically told me there is nothing they will do, and that their cards are "hit or miss" when working with HDTV's. Shouldn't that be a disclaimer on their specs on their website? Below is the customer support response from xfx

Overall Review: [MICHAELC 9/9/2008 12:45:59 AM] Hello Richard; if you are connecting the HDTV as a secondary display, its not abnormal for the display to go blank after showing some of the BIOS information on screen. We typically do not recommend using an HDTV as a primary monitor exactly for some of the issues you have described here, as they are typically hit-or-miss and tougher to use when trying to troubleshoot other issues. We do not offer BIOS updates for our video cards as that type of thing generally will not have any effect on this type of issue. If the TV has any other inputs such as VGA, please give that a try just as a test to see if there are any different results. Regards, Michael

Pros: I can play oblivion and stalker with the settings maxed out. Works fine with XP. I was very surprised that this card is more powerful then a 8600gt 256mb gddr3 version.

Cons: Not at this price.

Overall Review: Make sure you remove the protective clear covering stuck to the heatsink. I get 5 more fps with this vs. 8600gt oc 256mb gddr3. And 10 more fps vs. 7600gt 256mb gddr3. So this makes me question is 256mb gaming dead? This is the card to get the ddr2 does not seem to have any negative effects.

Pros: Performance you cannot beat this card for price. I come across all types of computers and graphics cards and this is definatly one of my favorites. I build computers everday for people and test all cards from onboard to the very pricey. For multi taskers and gamers this is great. I run Multiple displays without issue, all the games I play from the least intensive CS 1.6 to COD and Left for dead runs all those games pretty well. The tempeture under load is decent compared to a geforce 6600 runs alot cooler. The fan is not as loud as most fans its pretty quiet compared to other video cards with fans. This card will not be the solution for newer games in the future. It will run newer games decently but you will start seeing the limits of this card. When the next big game comes out with a new video engine this card will probably only handle medium settings efficently. Obvious bonus its SLI also and can be paired with another card increasing its performance tenfold.

Cons: This card is a mid grade card and will only last so far into the newer games. Obviously alot of common pc's aren't SLI and are using a single card. Using it without the SLI will limit its future performance and handling newer games.

Overall Review: If your looking to purchase this card either single or as a pair SLI, this is a great buy. The performance and price is great. Ive researched multi cards off newegg before this purchase and this is the one I kept coming back too. I recommend this for anyone playing games such as any Half-Life 2 game or mod great performance and full resolution. World of Warcraft I have jacked up on full settings and runs perfect, some slow loading on inbetween zones big zones on full settings. For people that might do custom graphics or webdesign this is a great card for multiple displays and multi tasking. I watch movies play world of warcraft at same time no problem.

Pros: Excellent card... sure its old, but it gets the job done. Smaller design, not very large, unobtrusive. Doesn't need its own power connector.

Cons: Loud fan... wow... its constantly running. I have an old GeForce 8700 in another computer, and it's temperature controlled, so if I'm not running a game or some other 3d application its super quiet. This card's fan always runs, and its somewhat annoying mostly because I'm used to the fan not running on my other card.

Overall Review: I bought this mainly because the motherboard I was using didn't have on-board video. This computer I built wasn't going to be used for gaming, but I figured what the heck. I was surprised how well this card worked for the price. Despite the loud fan, it works well as a simple desktop card and if you're like me and occasionally enjoy a game, it plays most of them just fine (HL2, COD4, Counter-Strike, etc.). Probably on the upper-end of the cheap video cards.

Pros: What can I say, I'm not a hard core gaming build, casual at best I'd say. I just wanted a card that could handle the bloating of Vista and Blu-Ray playback and this card does not even stutter in either. Jumped my vista index from a 2.1 to a 5.3 for just $63 (after MIR). For what I wanted its perfect. Just for kicks I ran 3dmark06 and got a 3dmark of 3774.... Not astounding but considering on board graphics got a 41 I'm pretty stoked

Cons: None really, its an older card on a slightly outdated technology, I got more than I expected!

Pros: GREAT GREAT GREAT for the money. I built my first gaming comp on a $600 budget ($580 out the door) and this little baby has worked out... GREAT!!! No problems installing and updating drivers, everything was on the disk that it came with.

Overall Review: I run World of Warcraft on medium to medium-high resolution and graphic effects with very few hiccups.

Pros: I've got to say it did wonders with my computer i play all of the half life games an i'm pretty speechless it totally rocks thanks newegg!

Cons: Nada Zero it kinda lags a little but i think thats not the cards fault i think i need more memory sticks