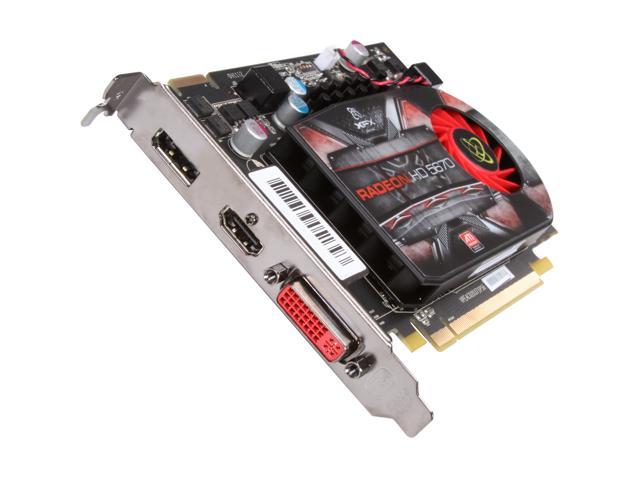 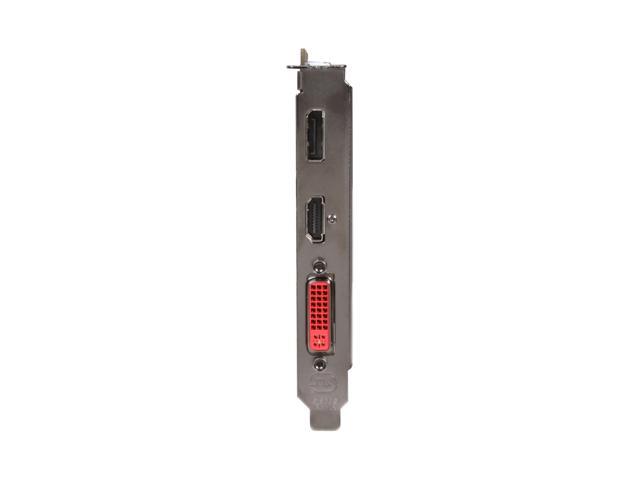 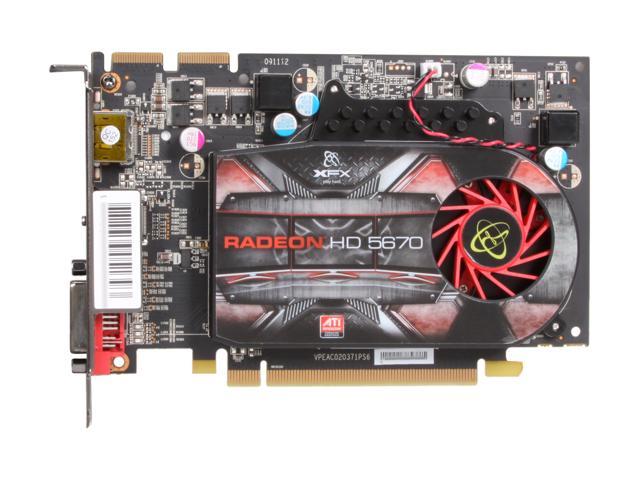 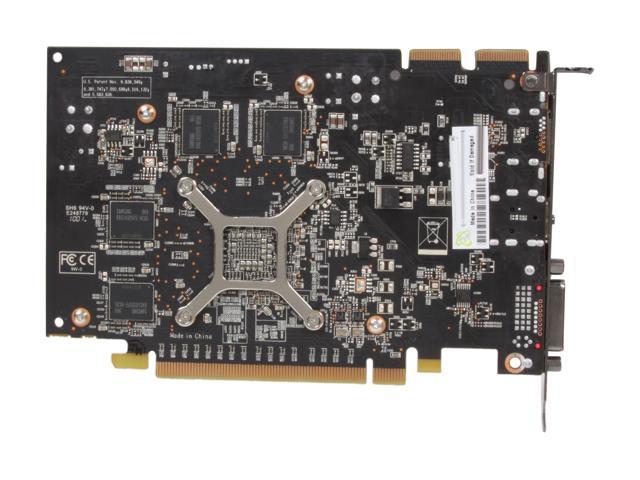 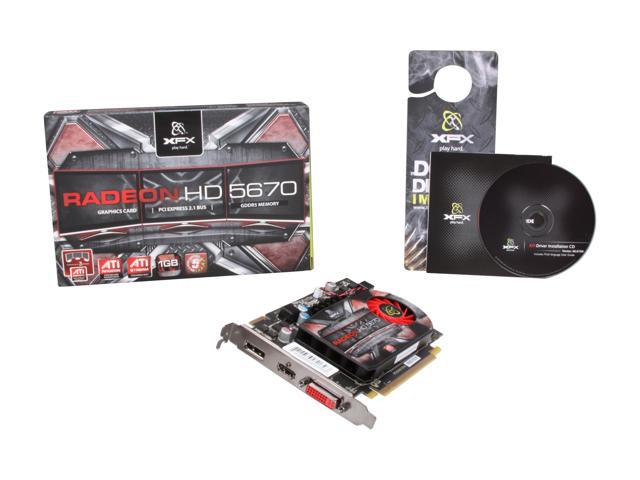 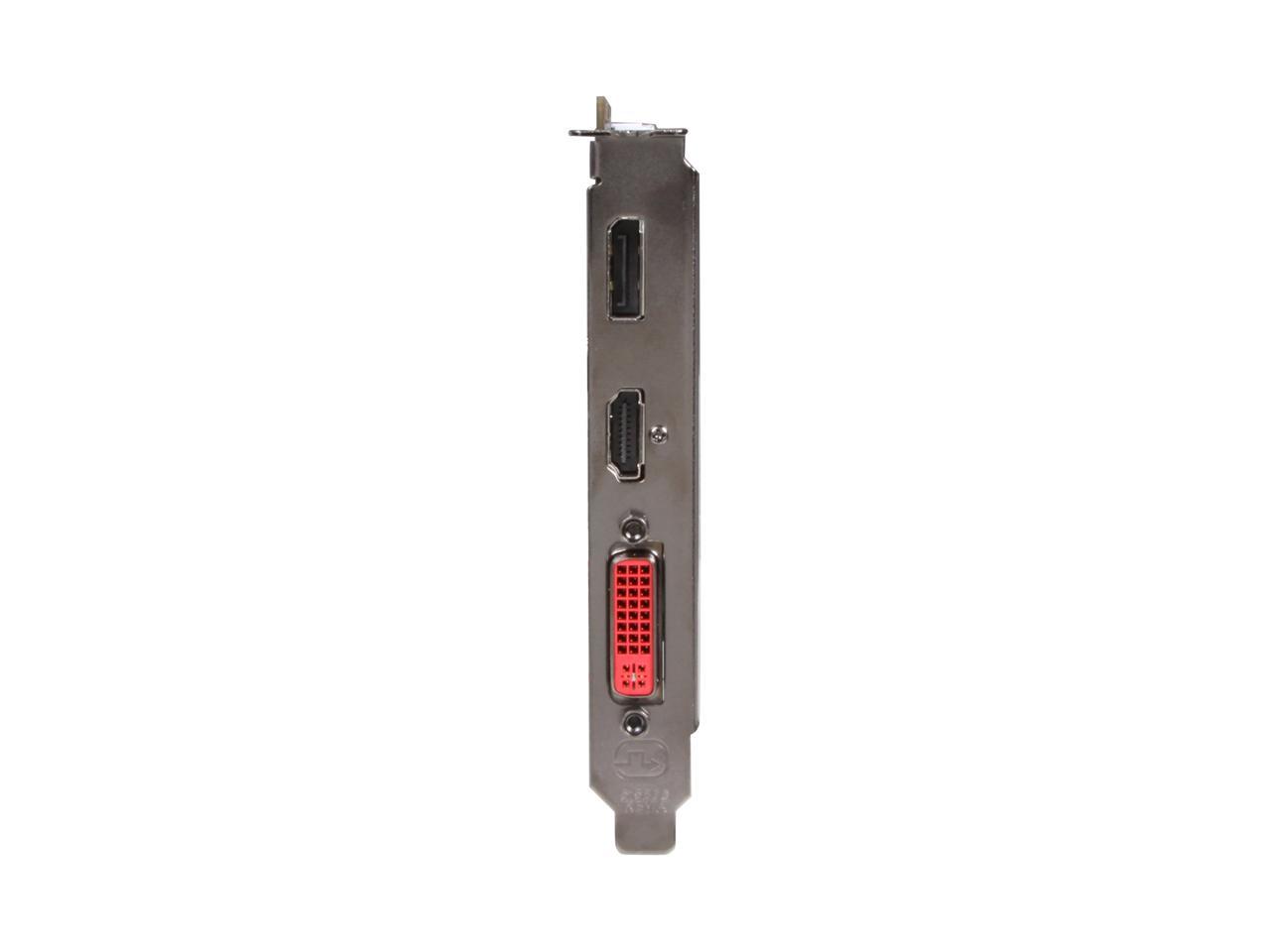 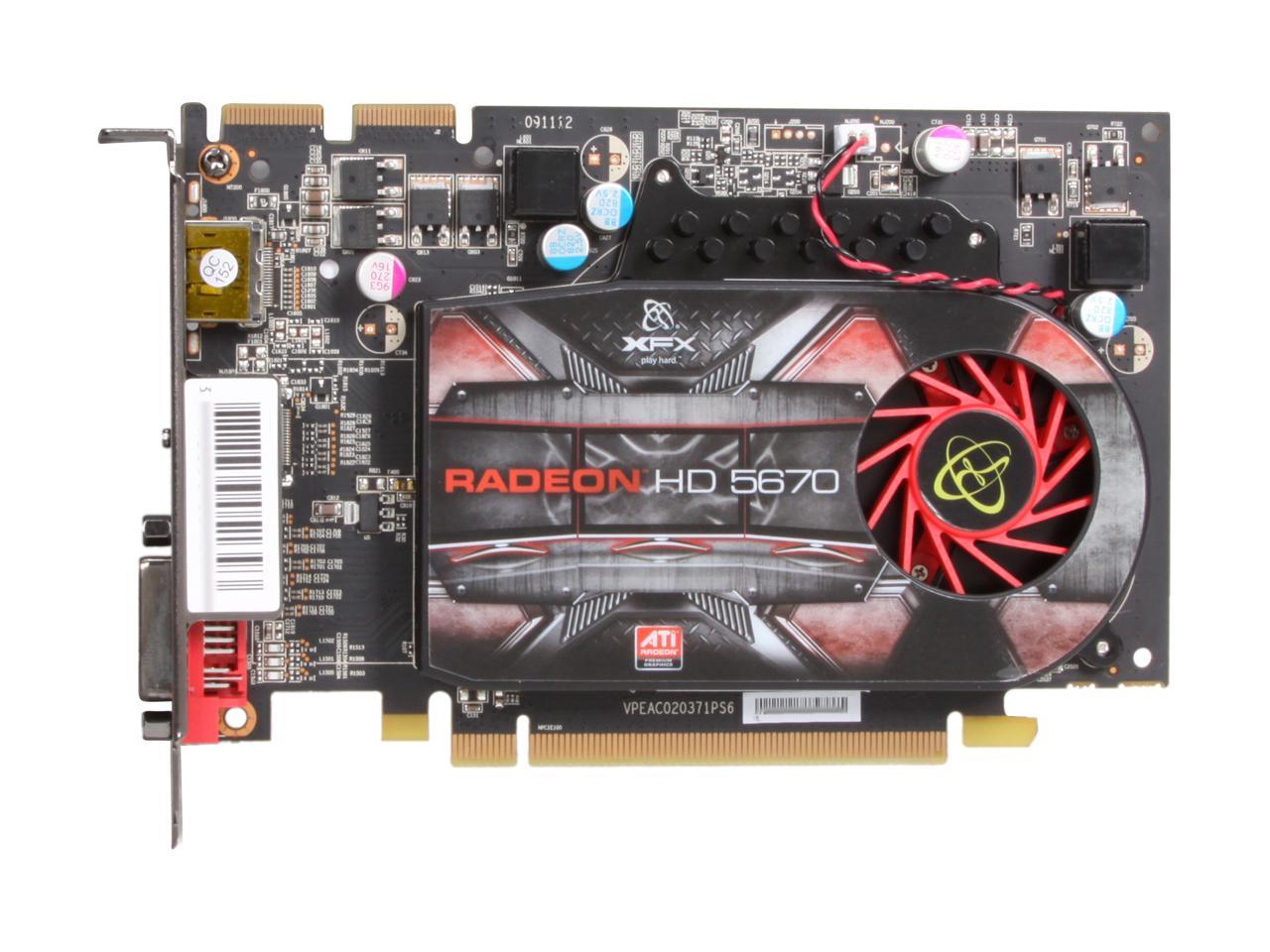 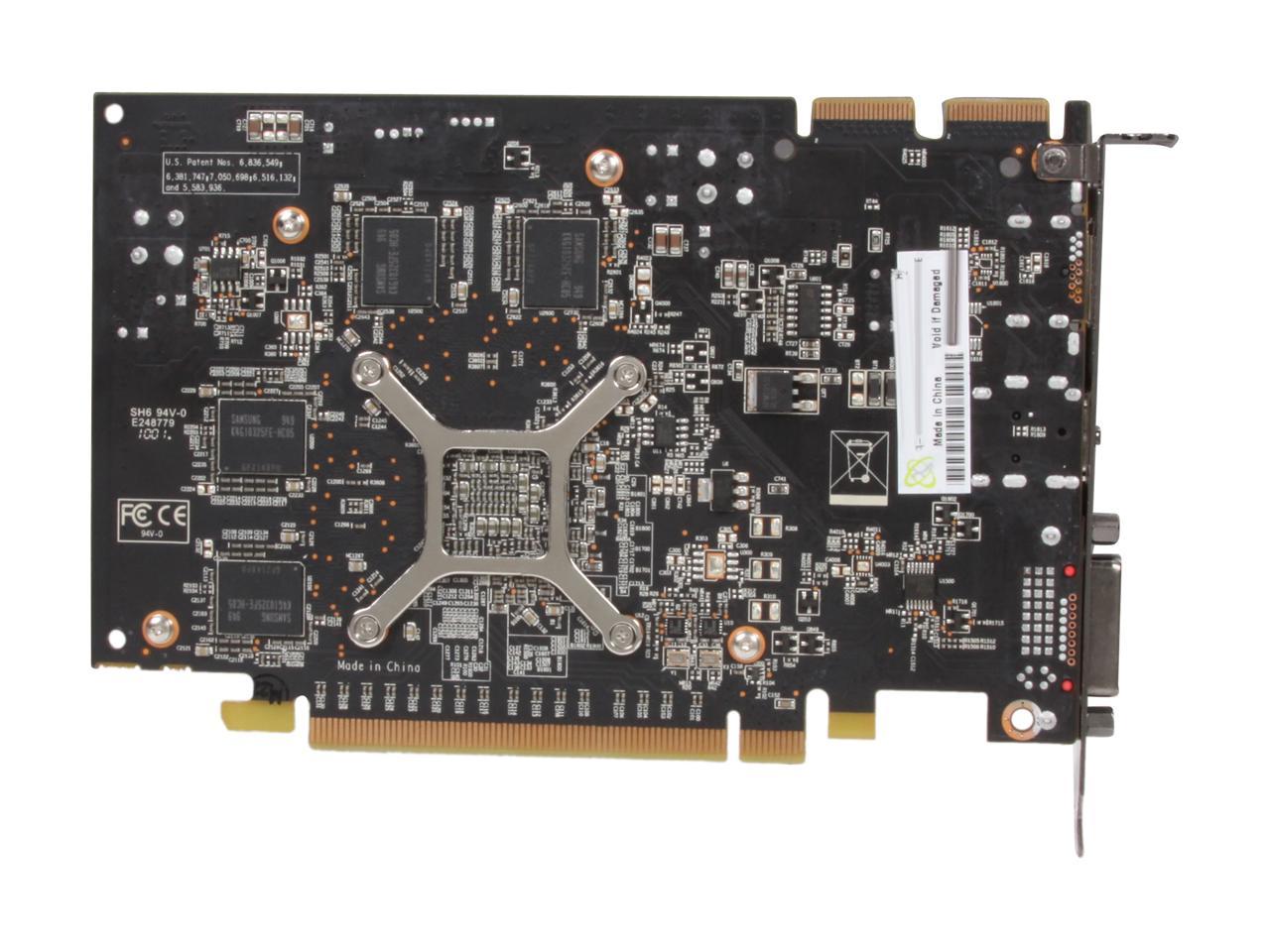 Learn more about the XFX HD-567X-ZNF3

Pros: This is a great card if your on a budget. By far the best card you can get in this price range. with one gig of ddr5 and direct x 11 support it has no trouble on any game I have thrown at it on highest settings, cod2, mass effect2, Batman... If your only looking to spend 120 bucks on a card... I would recommend this one

Cons: none so far, But I have only been using for a week

Cons: Wish it was dual HDMI*

Overall Review: * would rather be dual HDMI, instead i will just get a Display Port to HDMI adapter, if i want to triple monitor If your looking for a powerful graphics card with hdmi, that is also single stack and small then this has to be it. It plays WoW, Cod4, CSS the only games i play often all at high settings on 1920x1080p was also amazed at the temps i get with this card. even though it has a small fan and heatsink it is no warmer than my old double stack 8600gt.

Cons: My experience with the card really can't bring any to light. It does everything and more for the price. It would've been even better with a 256 bit memory bandwidth, considering the high speed 1GB memory, instead of the 128 bit. However, 128 bit bandwidth is not shabby though, so I took no points on that aspect.

Overall Review: I had a ATI Radeon 5450 that came with my computer purchase which yielded a 5.3 graphics rating on Windows Experience Index. Once I installed this card and my 500 watt PSU (I was not going to take chances installing the card with the 300 watt PSU that came with my computer, going against suggestions from the internet.), my Windows Experience Index went from the 5.3 to 7.0! Another example of this cards power is in the Resident Evil 5 benchmark. I ran the benchmark with my pre-installed 5450 HD and the results yielded subpar gaming experience: 23~30 FPS on high settings. Ran the same benchmark with the XFX card and got 55-60 FPS on high settings. A word of caution: it seems like this video card will complement a pretty fast processor, preferably a dual core processor. All the tests and benchmarks were done on my machine with a Phenom II X4. Your results will of course vary. However, my experience with the card is just great and would recommend it highly. Thanks XFX!

Pros: To change the "black border" around your screen via HDMI...open the Catalyst Control Center >> "My Digital-Flat Panels" >> "Scaling OPtions (Digital Flat-Panel)" >> Move the slider to "0% Overscan" (all the way to the right). That should do it.

Overall Review: Great card, a bit expensive...the things should be in the $50-60 range as their overall performance is mediocre....video cards in general are waaaaay to overpriced as a matter of fact....

Pros: Bang for the buck, a great card. I run HDMI straight from the PC to my HDTV and the sound and video quality are great.

Cons: With Windows Vista 64 I was having intermittent audio failure using the HDMI out. It would work fine, then it would suddenly show no audio device present for HDMI. I'd restart and voila - back in action. But since I upgraded to Windows 7 64, it has been flawless.

Pros: Same as before

Cons: Same as before

Overall Review: Note on installation: Forgot to mention this. This info would be useful for anyone upgrading a similar Dell unit to what I have. Installing the card was a little tricky. I opened the case, popped it in, and hooked the monitor and power back up per the enclosed instructions and turned it back on. I couldn't get a signal to the monitor. If I used the HDMI or the DVI on the card I didn't get any signal and if I reverted back to the HDMI or VGA hookups for integrated video on the back of the PC, I still couldn't get any signal. One might think the card was DOA. I pulled the card back out and found some instructions on the net that you need to disable the integrated video display adaptor in device manager. There is no option in the BIOS to disable integrated vid for these Dell models. If you disable the display adaptor in device manager, the screen will go to very basic resolution/graphics similar to safe mode. Then when you put the card in, it will default to the card.

Cons: HDMI display output to my 55" Samsung LED backlit LCD TV looks inferior to my DVI to VGA conection to the TV.

Overall Review: I bought this card specifically for a new HTPC build and wanted to use the HDMI output. My old previous HTPC could only connect via VGA. I was very disapointed to see that, after a fresh install of Win 7 X64 Ultimate and all up-to-date drivers, the HDMI display was inferior to the DVI to VGA connection to my TV. Admittedly this is the first PC I've built that I have used HDMI output, and after doing some Googling and TV and Catalyst Control Center tweaking I have managed to get it to look a little bit better but still not as good as the VGA display. The HDMI from my Blu-ray player looks great, but not from this video card. My thought is that the HDMI should look good out of the box but I've been disapointed. I will spend more time tweaking and researching but until I can find a solution (if there is one) I'll still be using the aged VGA connection.

Pros: Gets a 6.9 WEI (combined graphics scores) on my P965 pcie 1.1 mobo. Much more compact than the 8800 GT it replaced. The 8800 literally pushed up against the hard drive on the other side of the case. The 5670 card has 3 or 4 inches to spare. Requires no power cable. Quiet. Supposed to support 3 displays (haven't actually tried it myself). And directx 11. Also haven't tried that. The price is pretty good?

Overall Review: This card is part of a new system I'm putting together, which is all the latest and greatest (X58/i7/pcie 2.0). Well, the 5670 obviously isn't latest and greatest, but is pretty well reviewed. I just put it into my old mobo prior to launching the new build for sh175 and grins to see what it would do. Not all that much, apparently. I do like the low power/low noise aspect, though. And, it is likely to be future proof for a few generations with the directx11 and pcie 2.1 support. If it is doing as well in 2 years as the 8800 GT is doing now, I'll be very happy with the purchase. Kind of wished it had blown my socks off right now, though.