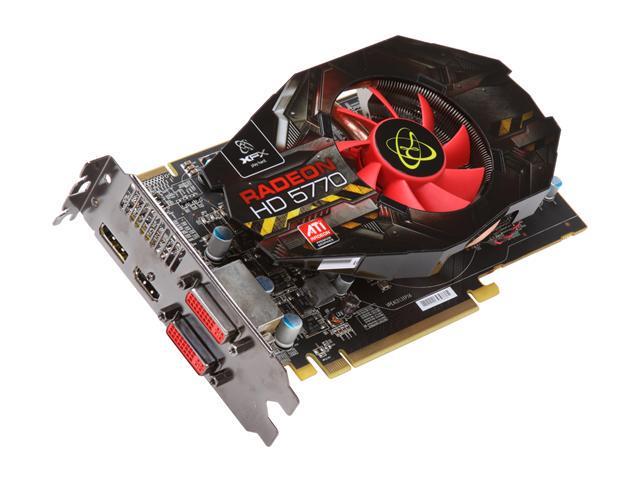 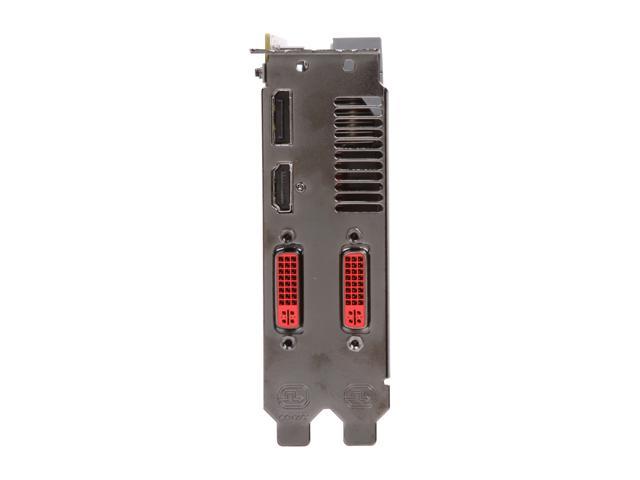 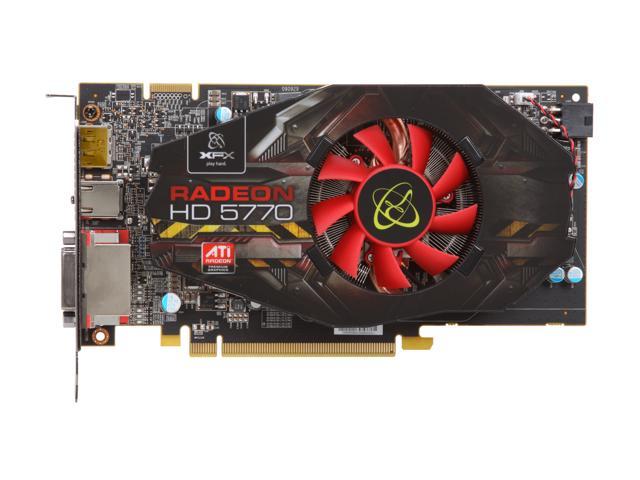 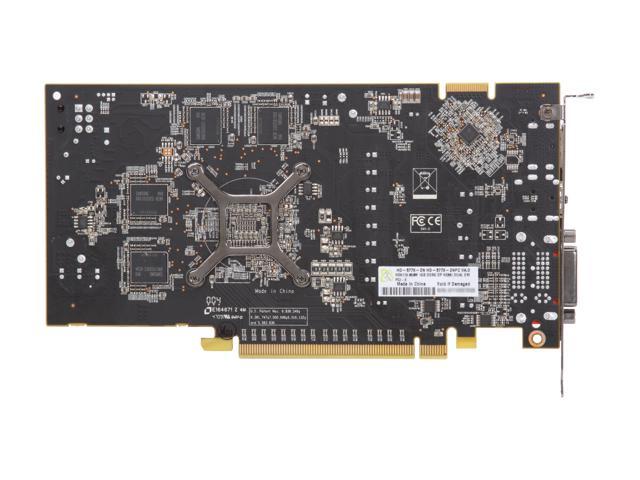 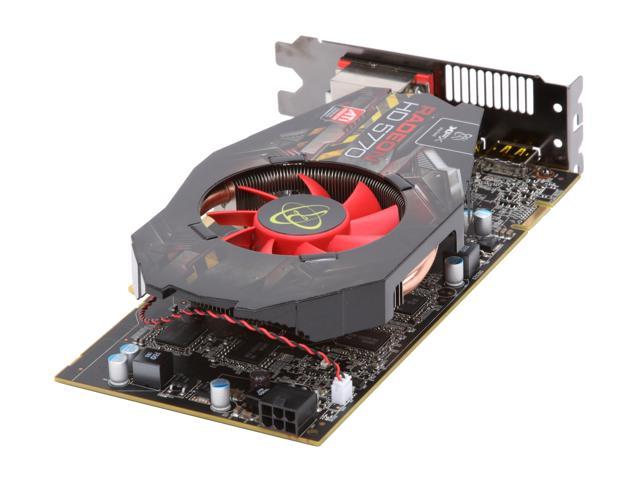 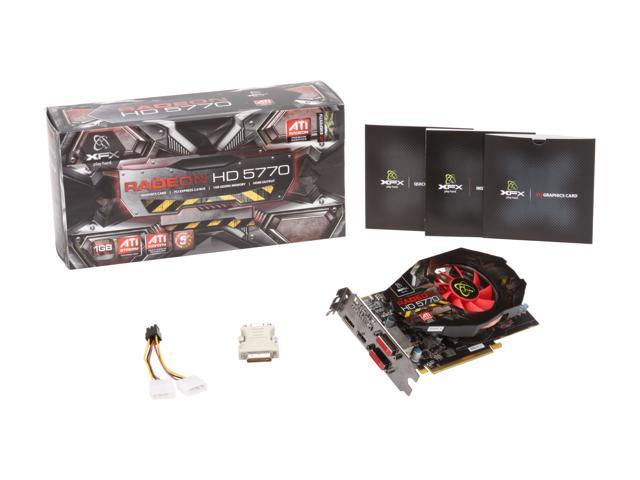 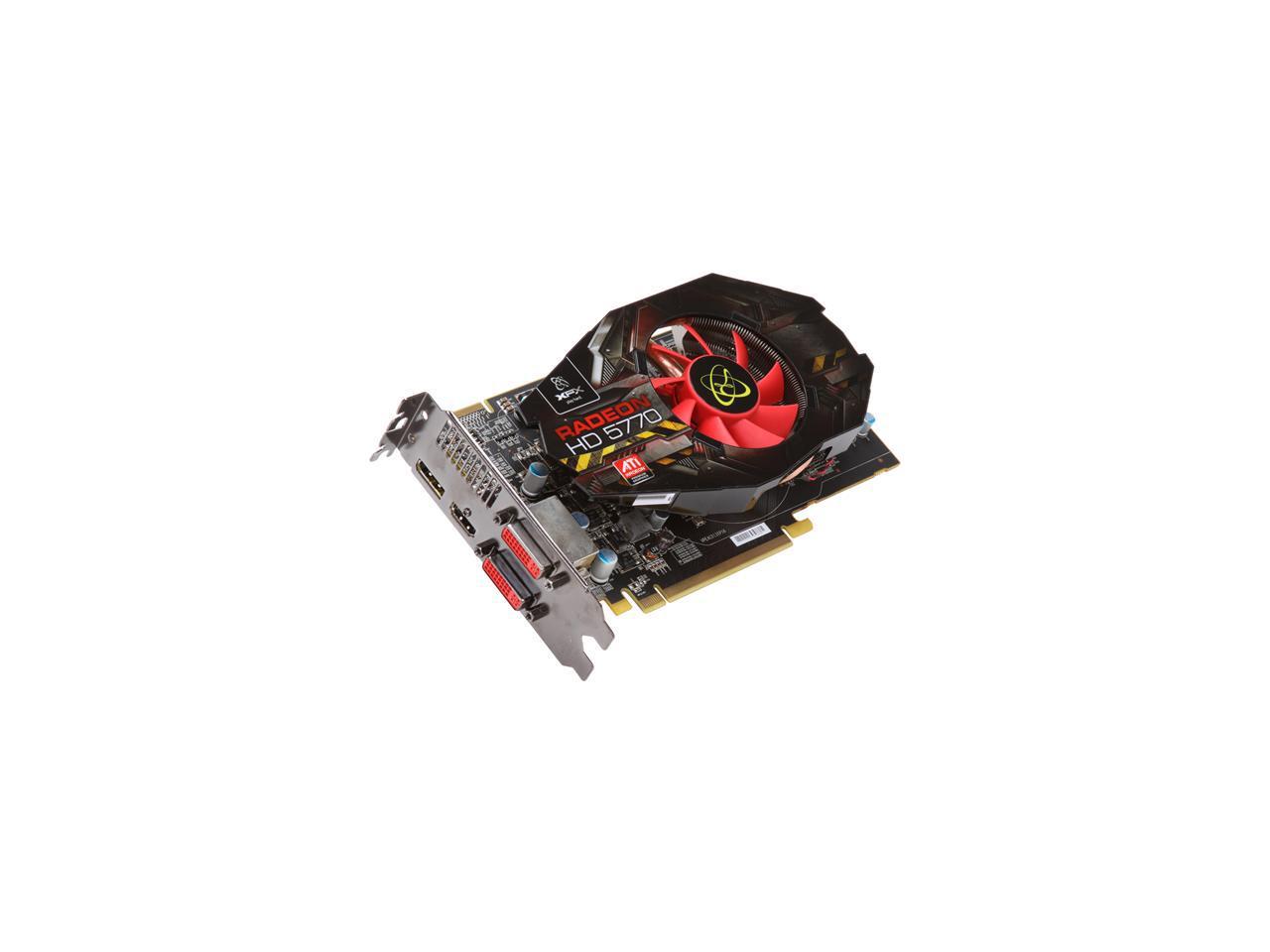 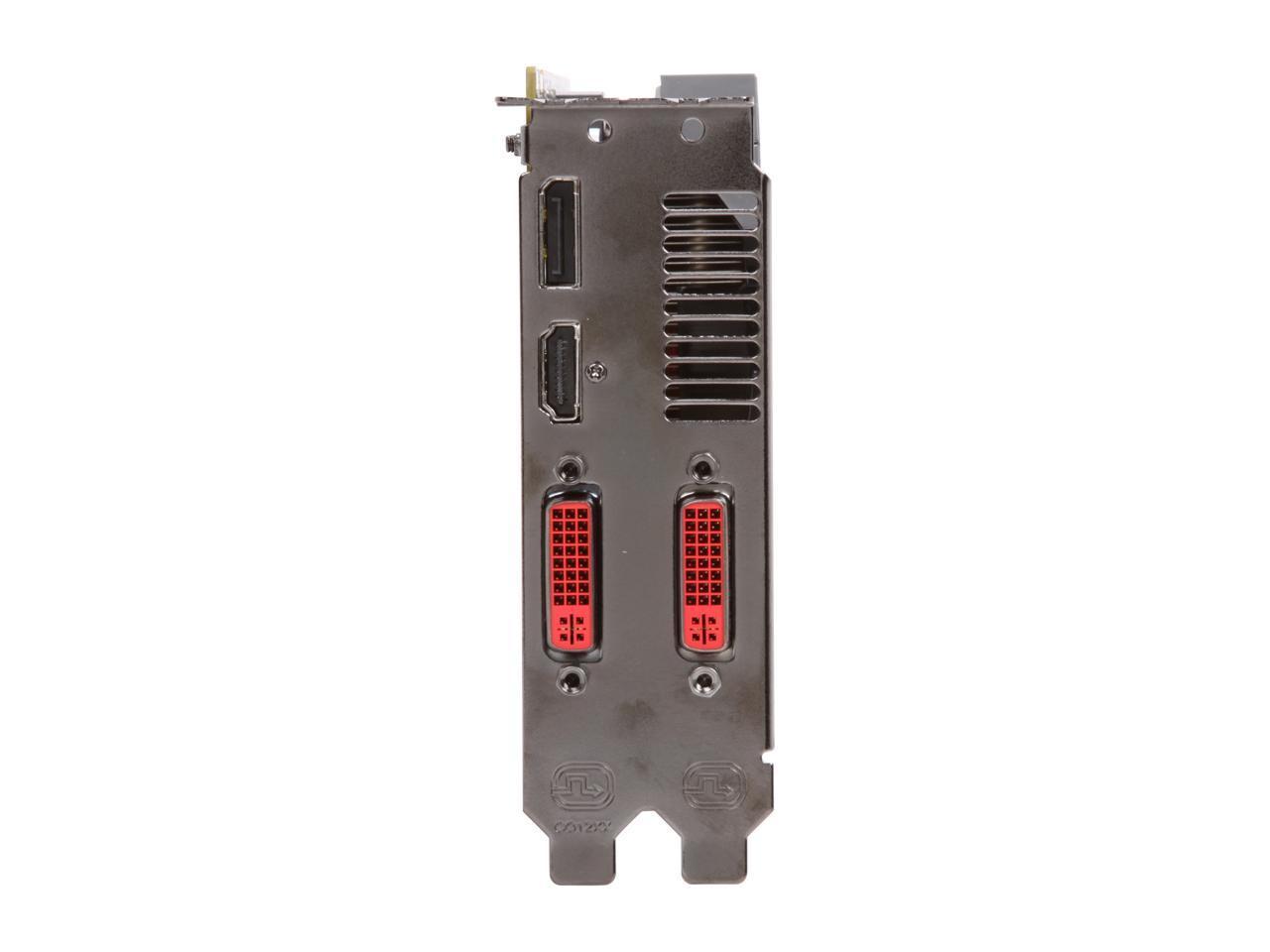 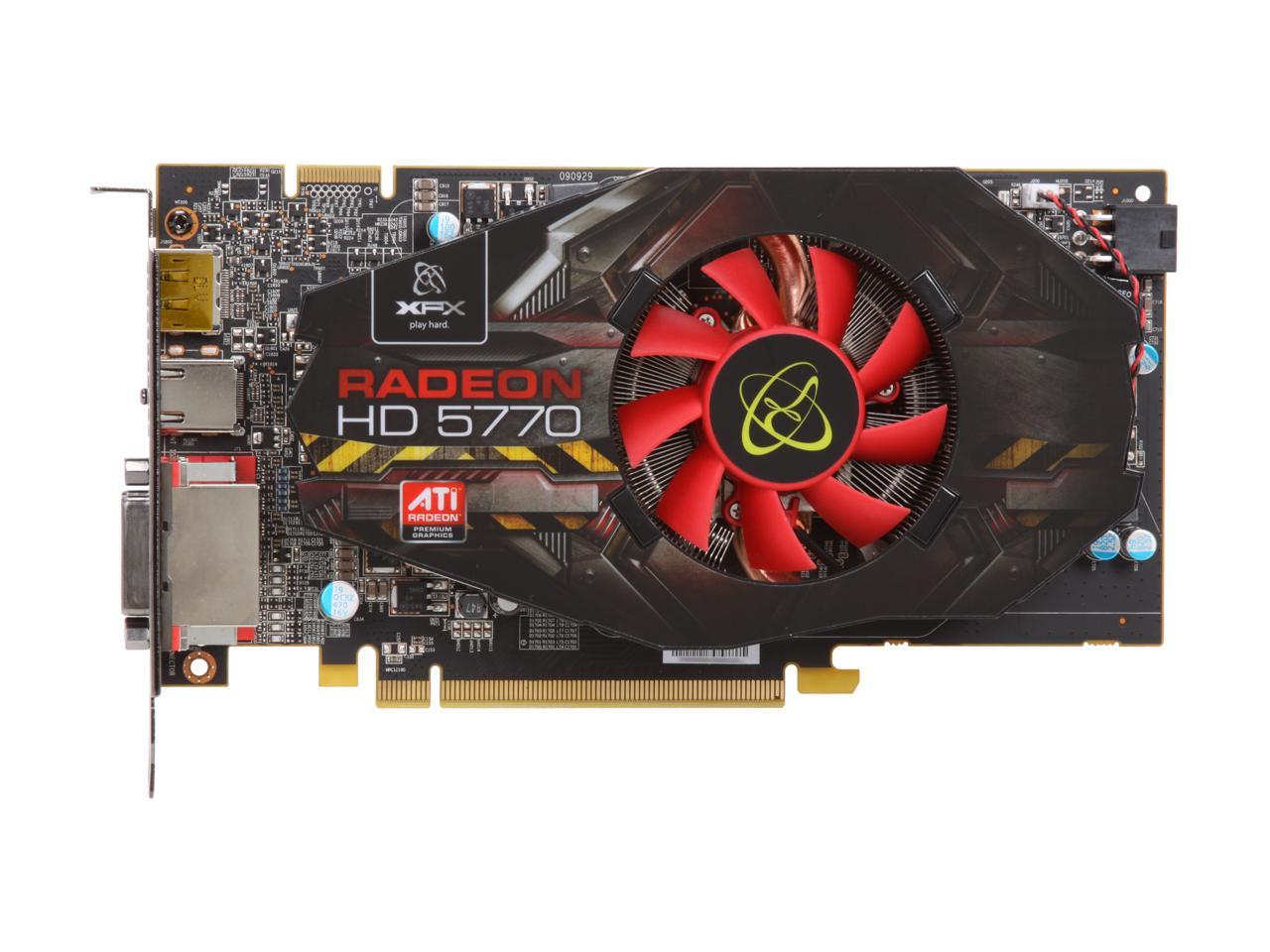 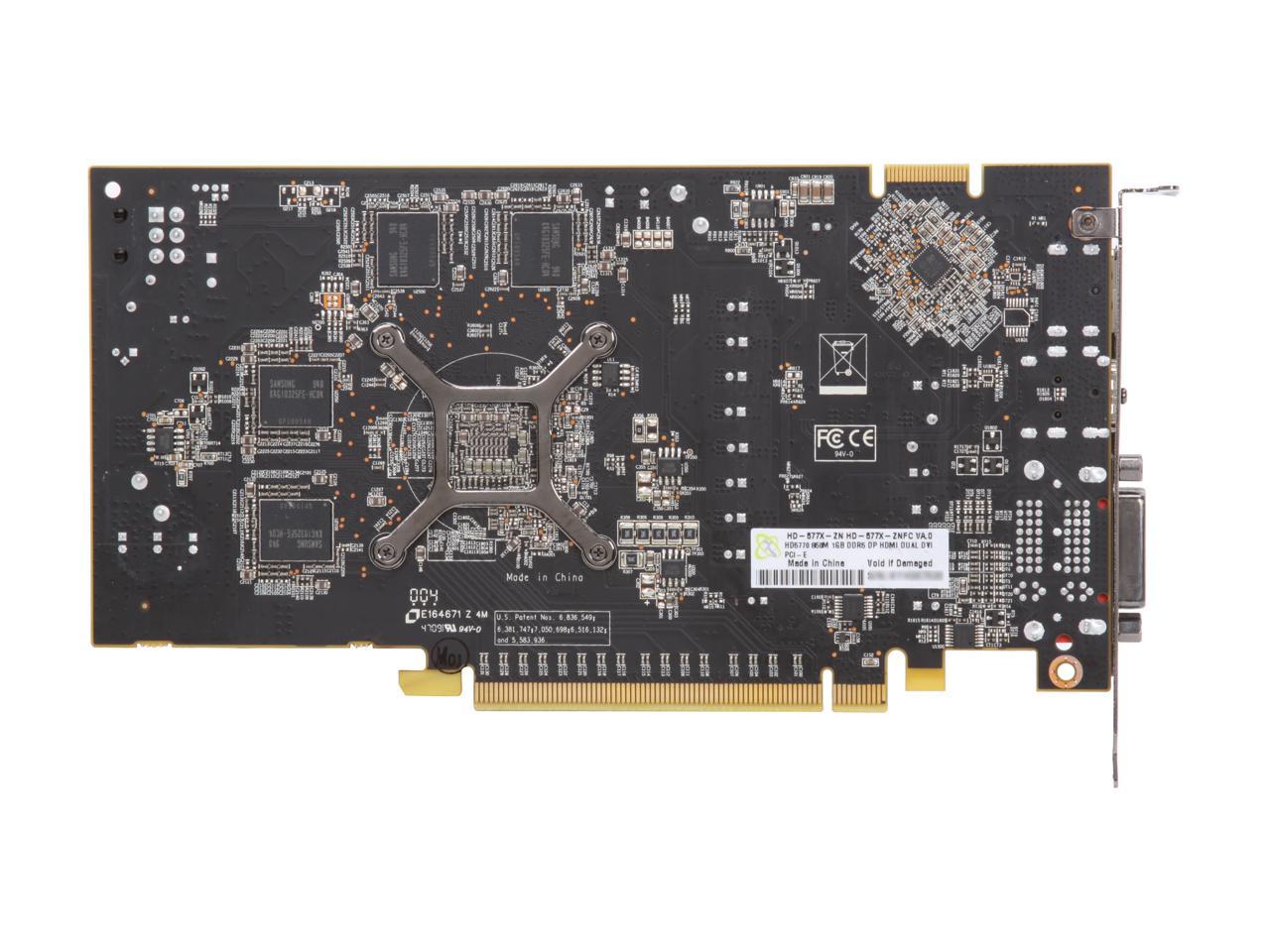 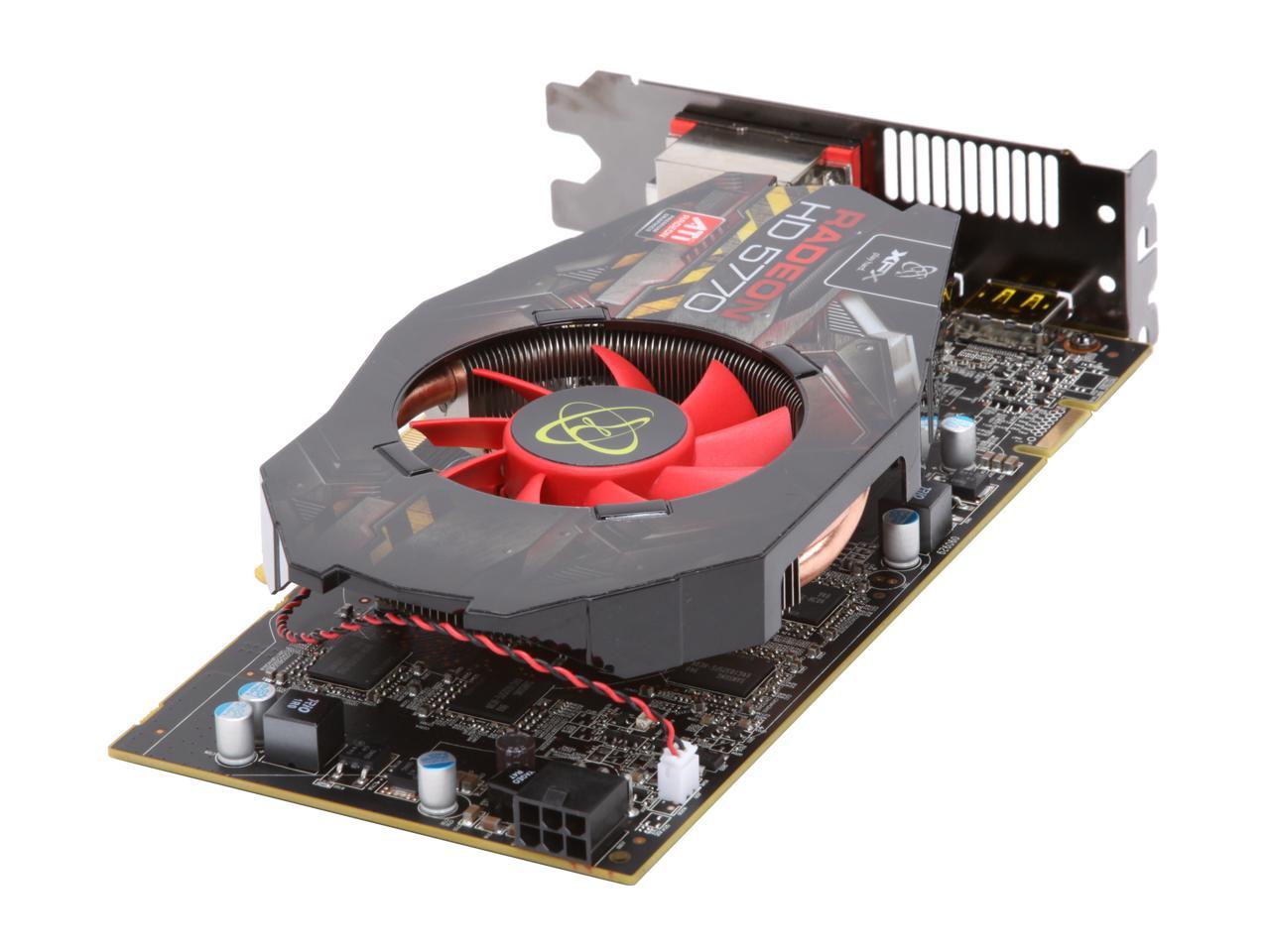 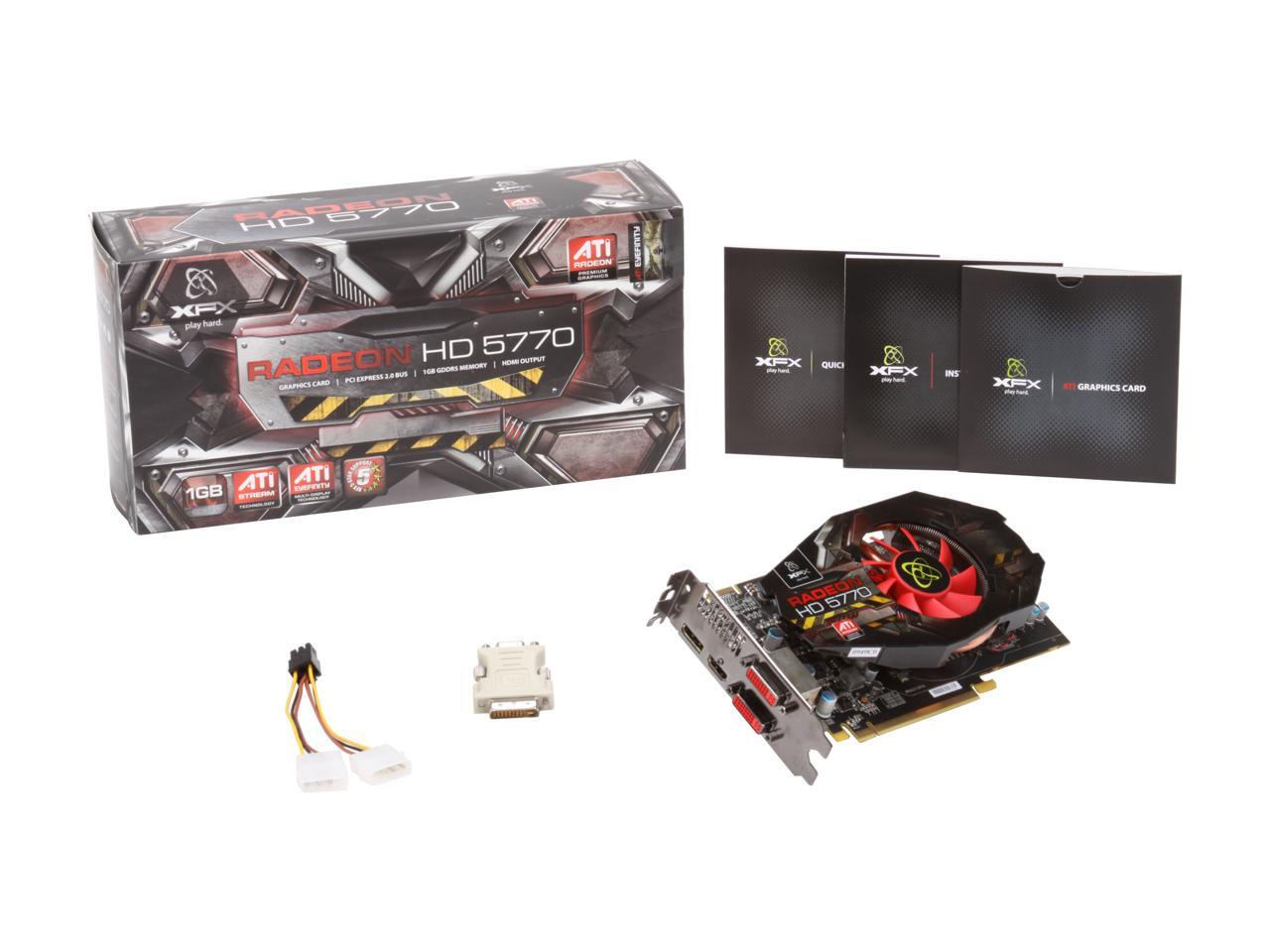 Learn more about the XFX HD-577X-ZNFC

Pros: I did a lot of research on Nvidia and ATI cards and determined this the 5770 was the best for my budget, power requirements, and amount (casual) of game play. No issues installing the hardware. Like the fact that it draws about the same power as the 8800GT it replaced. Fan is quiet, hefty amount of copper used in fan assembly. HUGE increase in performance noticed in Borderlands, and DOW2. Industry performance reviews are accurate. My luck the latest 9.12 drivers came out day of install so I did not bother with the included install CD and downloaded latest drivers from ATI.

Cons: No performance or operational cons so far however I've only had the card running for a few hours.

Overall Review: My System: Dell XPS 420 Windows 7 64-bit 8GB RAM NOTE: when you install a new video card expect windows 7 to be slow to respond if you do not do any prep work (revert to VGA drivers, goto safe mode, etc). I just did a straight swap and didn't even uninstall my legacy nvidia drivers. System booted slowly (as expected) and it did take about 15 minutes or so for the drivers to install however after the first reboot all systems nominal. This is a very new card and a lot of people are saying the drivers are still not fully developed. My short experience with this card is good so far. Kudos to Newegg for getting my product to me quick and without hassle.

Pros: Installed, downloaded drivers, restart, and everything runs smoothly. ZERO PROBLEMS :) This second edition cooler (egg shaped) is slightly smaller than the first (fully enclosed design) which is a plus for people will limited room in their case. Lastly, who can complain of double life time warranty?!

Cons: Does not come with a CrossFireX bridge (but I'm not knocking off an egg just for that reason). Other than that, none so far.

Pros: I bought this for World of Warcraft, I needed a card for 25m raiding that would pull it's weight. I replaced an older 4670 and the difference was amazing right out of the box. This card can play at Ultra settings at 1680x1050 with max multisampling. I'll probably lower the settings for 25's, but only because I'm ram and cpu limited (Phenom II X2 545, 2GB DDR2800). For people concerned about their mATX boards having trouble with this, I did not have an issue at all. It ends roughly right where my SATA ports begin (Gigabyte AM2+ GA-MA78-US2H). I believe it did cover up an expansion slot, but I never used it anyway. The fan is also a lot quieter than my previous card. Drivers/ATI CC also work under XP32, just install from the ATI site and you're good. I was a little worried after reading reviews, but it seems all the kinks have been worked out. I literally popped the card in, downloaded the drivers, and rebooted.

Cons: The only con I have is for UPS, the three day shipping was actually four and it really didn't go that far (From Cali to Arizona). The same happened for my last order, it was delayed for a day or two and it was somewhat annoying. I'll probably go with FedEx like a few other reviewers have said on NewEgg. It's a little more expensive, but if it arrives faster and in better shape I might as well opt for that.

Overall Review: I toyed around the idea of buying a Sapphire 5770 because I had a good run with my last card from them. But with XFX you're not only getting a solid card, but piece of mind. If this thing blows up somehow down the road I have a warranty. Not to mention, if I give this to a family or friend they also get that same piece of mind. <3XFX :)

Pros: stable, fast, runs cool. I haven't had any problems in the week and a half i've had it. easy install. didn't even have a problem switching drivers from my old Geforce card (that died spontaniously)

Cons: the fan is a bit louder than i'd like. of course, i have a case with side vents that sits on top of my dest next to me. if i had a closed-sided case or i had it on the floor next to my desk, i'd probably never notice.

Cons: only thing really is that having a PSU with a pci-e connection is a must. i was running a 500w that didnt have one and i was using the included connection adapter that turns 2 molex into a pci-e and it wouldnt power the system properly so i had to buy a new PSU for this thing. Not really a con, just somthing to be aware of.

Overall Review: What is the world do you need Sli or Crossfire for? i havent ran a single game that this card couldnt handle on highest settings very well.

Pros: Overall massive increase in performance from older HD3850. Eyefinity was a breeze to setup just need to get used to have so much move real-estate to take in. Only BF:BC2 has gotten this baby even warm. definitely a buy!

Overall Review: Price was on target, performance is very pleasing as well as DX11 and eyefinity, no cons what-so-ever !

Overall Review: - Make sure your MoBo slots are spaced out to allow other cards to be used without blocking the air fan intake on card. I think this card is a little wider than normal and may interfere with an adjacent card such as sound card, fax, etc. Had to move cards around to allow proper ventilation.

Pros: Fast. Plays all my games (no current FPS) silky-smooth at 1920x1080. Cooler is quiet. Sips juice. Card is not too long (will fit in some mini-ITX cases).

Cons: Having an issue with CCC, but the card's drivers work just fine, and I probably won't need to overclock it. The fan is audible when it ramps up, but isn't whiny or obnoxious.

Overall Review: May use this in an upcoming "minimalist" build in a mini-ITX case with a possible 300W power ceiling; with either a 45W AMD (announced, but not available yet) or a 73W i3.