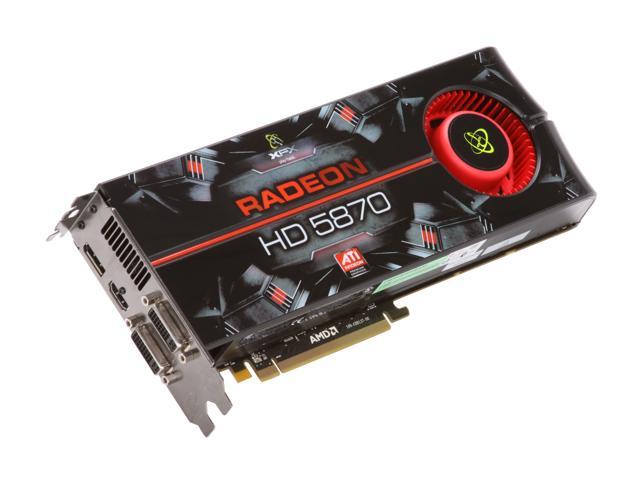 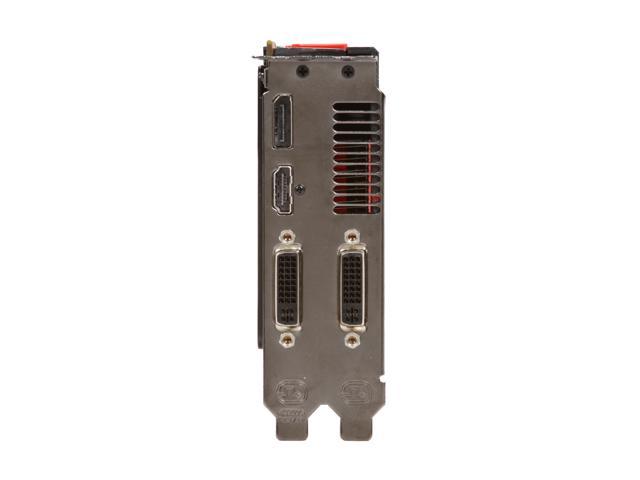 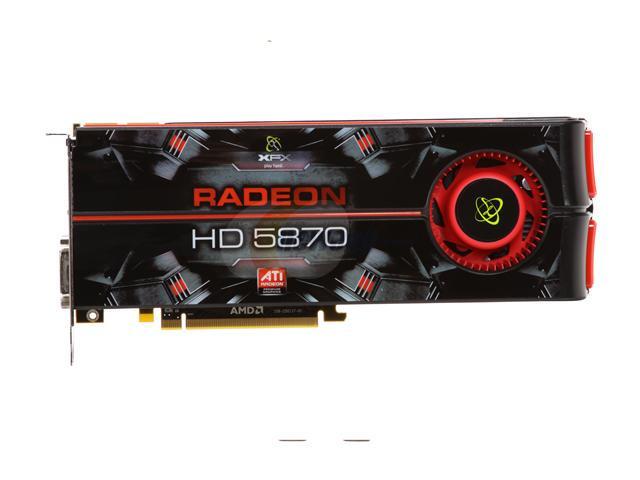 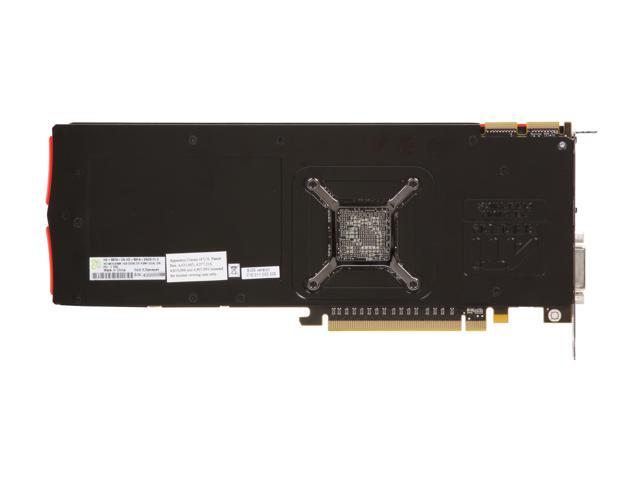 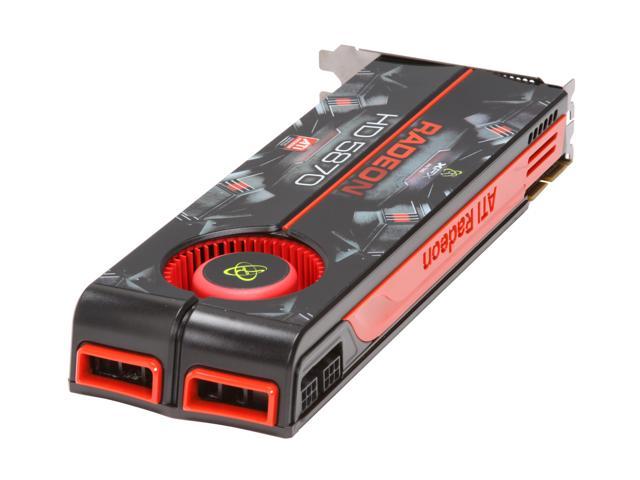 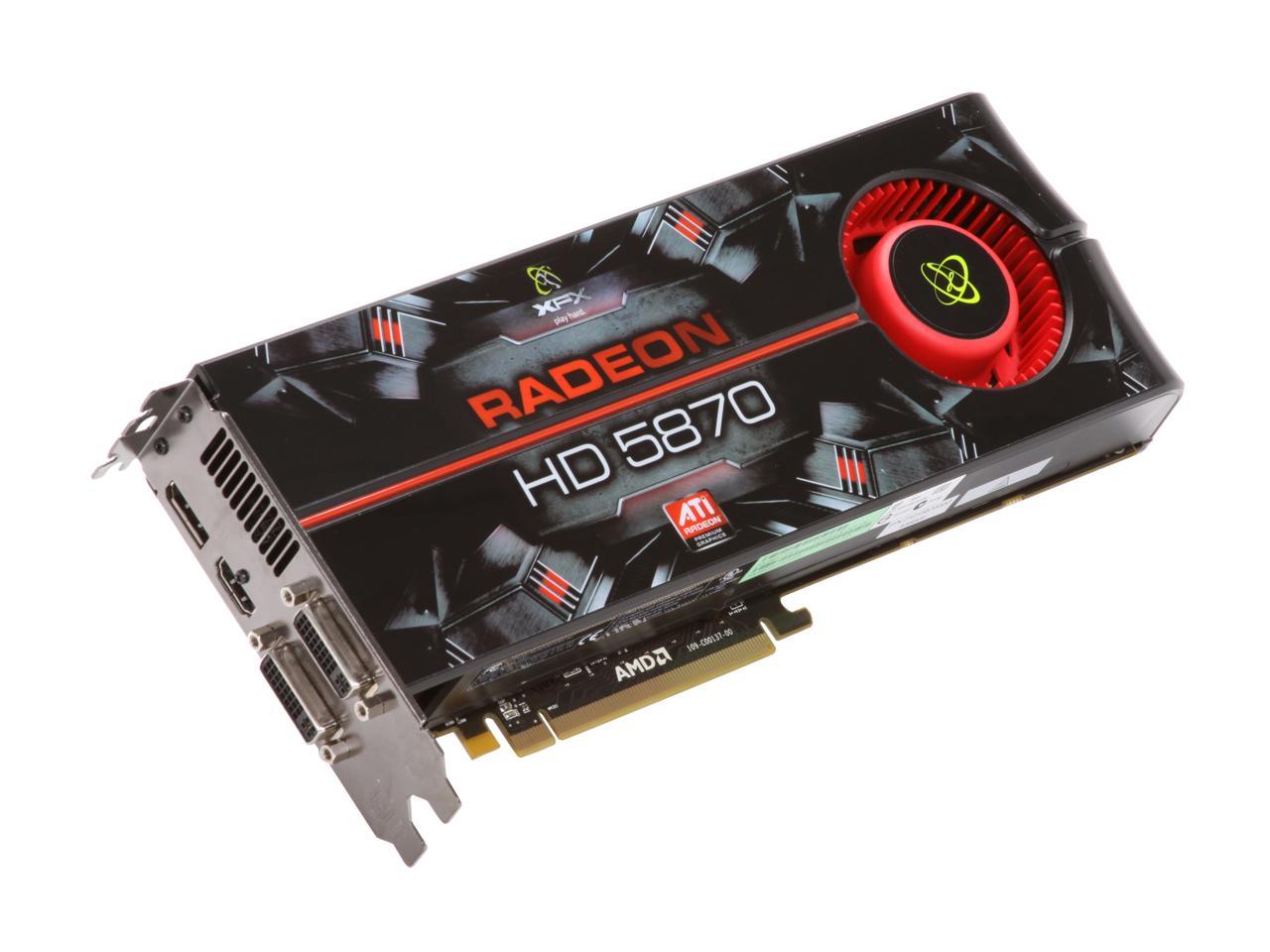 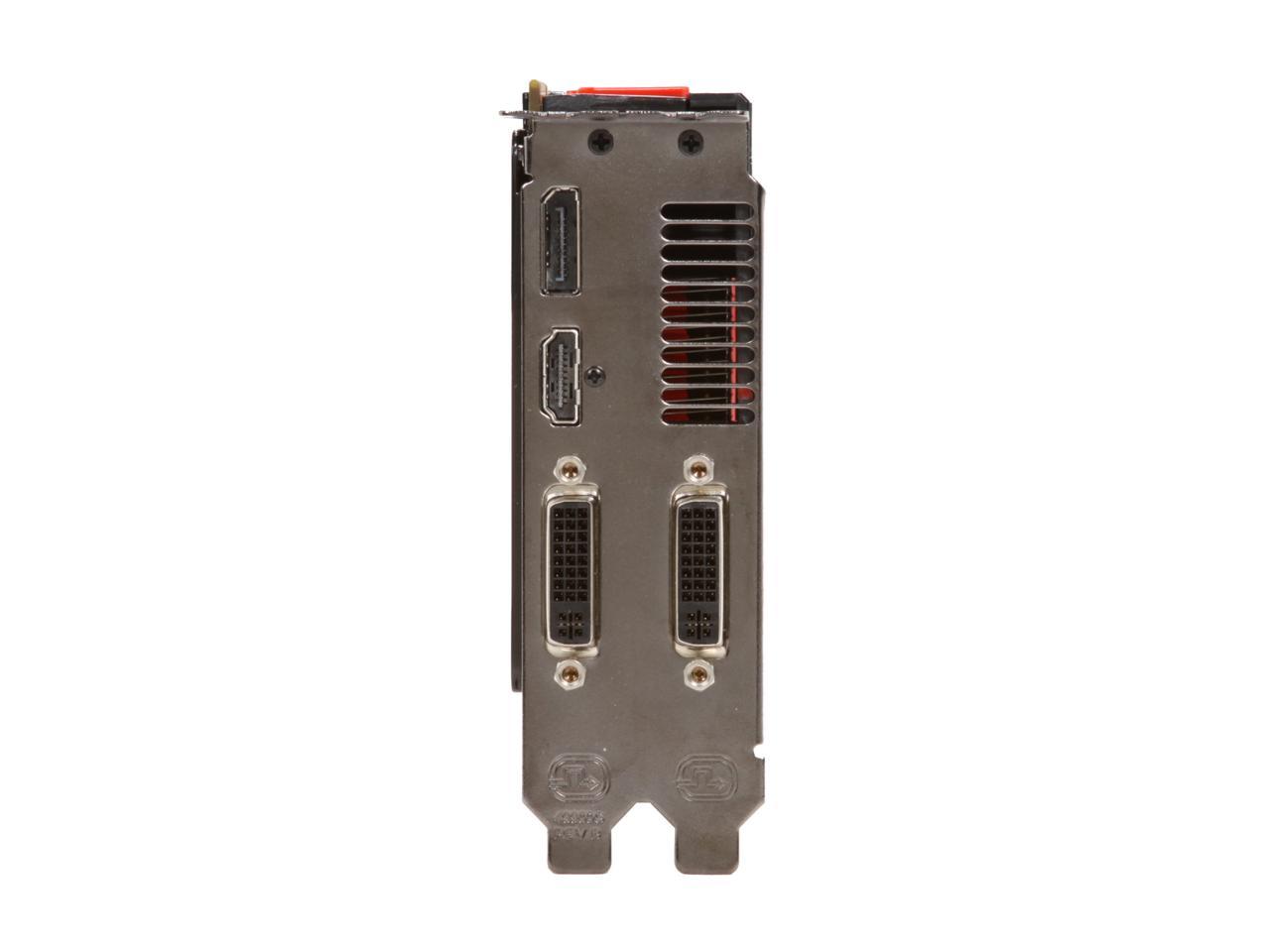 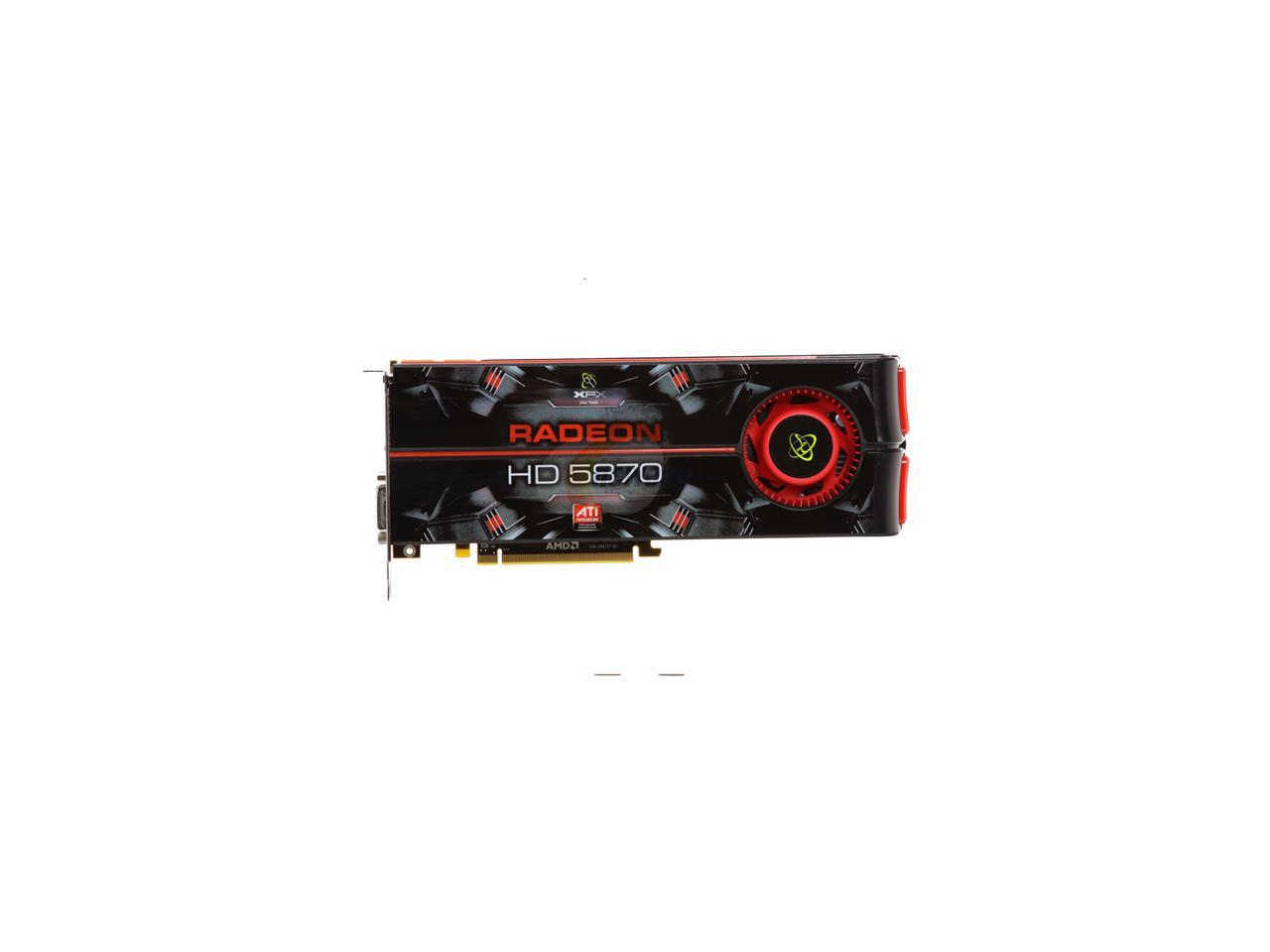 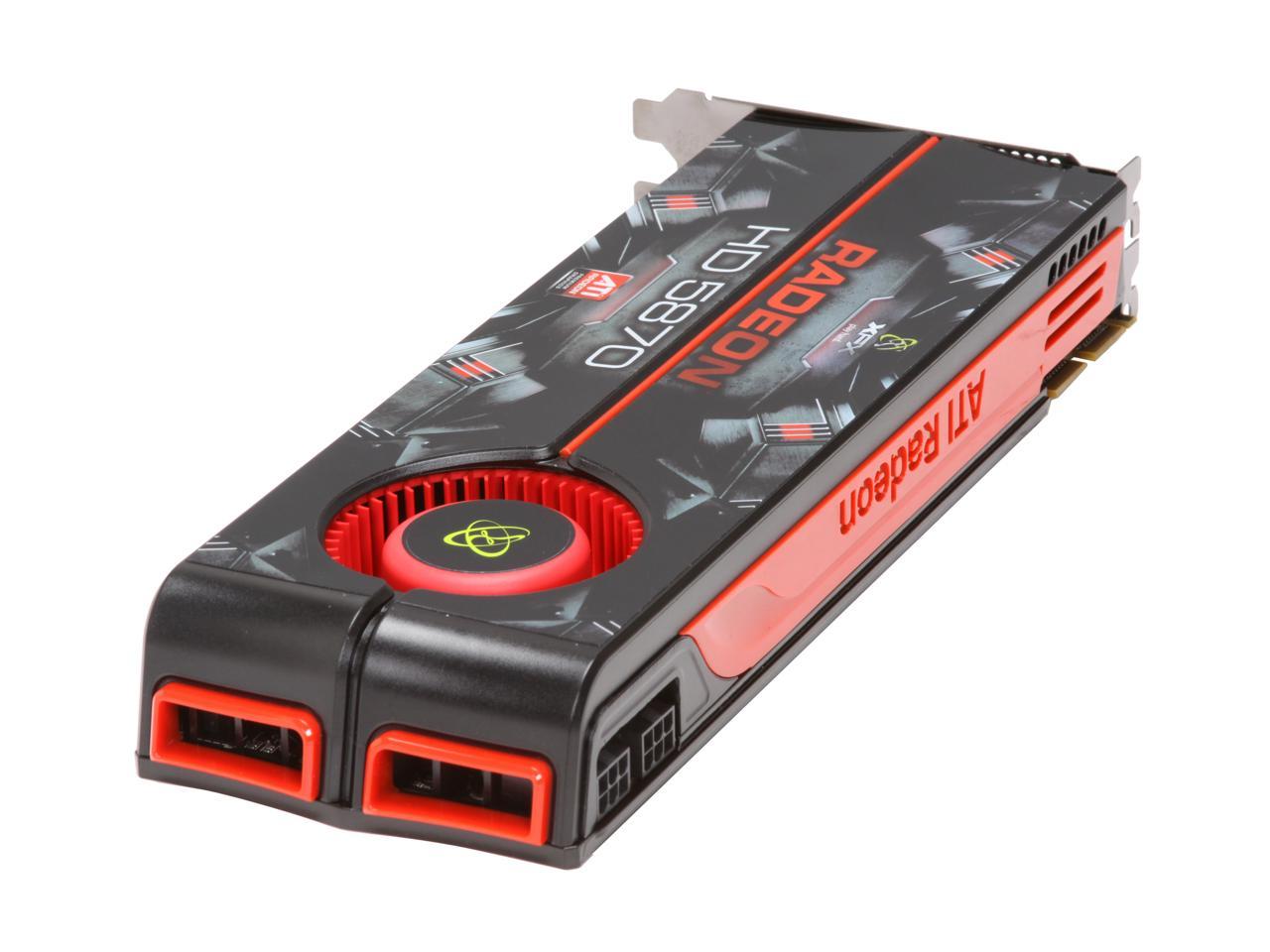 (191) Write a Review
OUT OF STOCK.
Specs
Reviews

Learn more about the XFX HD-587A-ZND9

Pros: Worked right out of the box! Had no issues with drivers, stability or size. Took my windows experience rating from 6.9 to 7.3 with this baby! Better stability than my old card.

Cons: Doesn't get up to 100c like my old video card, so the space heater aspect of this PC is ruined.

Cons: XFX have altered the BIOS to set the default GPU and RAM speeds above ATI stock settings. The card is NOT stable at the new default speed. Both the Windows 7 Experience Index test and World of Warcraft caused the GPU to lock up after a period of time using Catalyst 9.12. I noticed that the fan doesn't seem to spin up much when the card is under load; maybe manually turning it up would help, but the product should work correctly out of the box! -1 egg for not working correctly out of the box.

Overall Review: Not worth the extra price tag over a stock-clocked 5870, as you can overclock those yourself via the drivers. I only bought this one because I wanted an XFX 5870 and the stock-clocked one wasn't available. It looks like I'll have to underclock it to get it stable :(

Pros: This is by far the most amazing performance I have ever seen in a single card. There is nothing this card cant handle. Zero issues. When I first installed the card and updated the drivers I immediately loaded Crysis and cranked all the settings up to Very high with max resolution. I have never seen a game run smoother! I tried to get it to bottleneck and it laughed at me. Get this card people - if you can find one lol.

Cons: Not a performance con by any means but FYI - if your putting this into a HAF 932 case, don't use the plastic retainers in the case - It's too heavy and I didn't feel good about the PCI-E slot/MOBO supporting the weight so went old-school and used a couple screws.

Pros: Fantastic performance in just about any game I've played, until it crashes! XFX tech support seemed kind, and insisted I RMA the card, so I did. They tested my original and came to the conclusion that it was "faulty" and shipped me a replacement. Two weeks later I get another card (different serial number) that suffers from the exact same problem. It literally crashed within an hour with the same symptoms and error message. I tried it on another computer (as I did with the previous one) and the very same problem happens on a completely different system with a different OS, motherboard, CPU, and RAM. Now, if they said the card was faulty, I'm going to assume this RMAed card has the same issue.

Cons: Do yourself a huge favor and go to Google, and type "5870 BSOD" and you'll get hundreds of people, all with the same problems. Gray/brown/green screen crashes, sound stuttering, and people just pulling their hair out over these cards (mostly from XFX). HardOCP, Guru3D, TomsHardware, and even the ATI forums have MASSIVE 30-40 threads over this issue. PLEASE, think it over carefully before spending your hard earned money on one of these faulty cards. Overall, I tried the first card I had in three different systems, sent it back, and they said it was faulty. The replacement is doing the same thing, and I've tried it in two different systems. Seems pretty obvious to me that they sent me another bad card. Not to mention the RMA'ed part had dust and fingerprints all over it when I removed it from the box. It's likely they just shipped me a card someone else had RMAed.

Overall Review: It looks like ATI is working on a fix according to the news over at Toms Hardware, but how long will that be? Many of the people having these problems have been dealing with this issue for several months. I can't play many of my regular games, including World of Warcraft and Modern Warfare 2. Sometimes it happens while browsing the web! While some of these cards are obviously going to be fine, people should know that there is obviously a very high failure rate and it's well known by XFX, ATI, and many gamer communities around the web. Do yourself a favor, and save your money!

Pros: This is my second purchase from the egg for an XFX HD 5870. Best money I have spent to date on my system. Game play is as fast on one HD 5870 as it was on my GTX295 in every game I play. First Run out of the Box I place in the top 150 in the world in all of the single card entries for all brands of cards... At stock GPU clocks.... on HWbot running the Performance test in Vantage. This card is much lighter (Weight) than my 295. Makes me feel better about it hanging on the PCI-e Slot. The Heaven bench tool looks amazing and shows this card and DX11's true potential. All the Red parts on the case react to my UV lights in the case! Love the look!! Very pleased ATi is making Nvidia work for their crown every six months again. This is great for us as consumers. It helps bring out great products like this. Just think about how p!$$ poor ATi was just two years ago! This card is perfect in every way. Can't wait to see the first "Real" driver for these so we can see what they can

Cons: Pricing... I think $329 for this card would be far more appropriate.

Overall Review: ATi has finally caught back up to Nvidia. This is very good for us consumers. True competition instead of hype wins every time. I had enough of ATi with my 1600.. swore I would not go back.... Then they came out with Eyefinity. Add this to the Nvidia delays, and I simply could not wait any longer. I buy most games as they come out and wanted DX11 and Multiple Monitor support that this new tech brings. Eyefinity... well...... Eyefinity= Remember those stickers on the back of pickup trucks as kids that said something like.... "You can have my Smith and Wesson, once you pry it from my cold dead hands"? Yeah.. it is like that. It is that frikn impressive! Running... EVGA Classified, 920, 2000 RAM, RAID0, Win 7-64 (3) Dell P2310H's in Portrait Eyefinity, Crossfire 5870's

Pros: its twice as fast as my 4870.it runs so much cooler.no problems or lag in games like modern warfare 2,crysis, bioshock 2,left for dead 2,

Cons: i kept on getting the pixilated blue to black screen.i could hear the game so it was not the computer did not crash.i have seen it before with my 4870 from trying to over clock to high.so i took the 5870 from 1300 to 1250.no more crashes.

Overall Review: hope this helps some others out there

Pros: Fast, Google the reviews and check it out for yourself. I've had no BSOD, grey lines and no crashes b/c of this card. I did not apply the patch that was issued earlier this month to address grey lines. I recently installed driver 10.2. I've had no problems before or since.

Cons: None for me. Although, it would have been nice if a game was included for free. But I choose this card for XFX's life time warranty.

Overall Review: Dell 30" 2560x1600, GIGABYTE GA-EP45-UD3P rev. 1.6 BIOS FD, G.Skill 8GB F2-8800CL5D-4GBPI, Win7 Pro 64-bit. It's an excellent video graphic card, my experience with this has been nothing less than great. I'm dying to try Eyefinity and play DX11 games. Make sure you register the card with XFX to ensure the lifetime warranty. Also, if your curious this card will fit in your case, when installed, the card extends a little over 1 inch beyond an ATX sized motherboard. It fits nicely inside a Cooler Master Stacker 832.

Pros: -First off, this baby is running cool. Mid 30's at only 40% fan. That's 20 deg. less than a Nvidia 200 series card. -Goes perfect with my case and setup in terms of coloring and backplate. More on coloring in "cons" though. -Great drivers, and I absolutely love the Catalyst Control Center. Everything all in one place. -XFX with its second-party warranty. Means someday I can sell this to somebody, and they get full coverage. -DX11 and real, not paper, performance months ahead of the "mysterious" Fermi. Gave you more than enough patience. Whatever Nvidia, you lost my business!!!

Cons: -That CrossFire bridge has got to be remade, in either a black or red color scheme. The diarrhea brown does nothing to compliment anything in my system. -At 100%, the fans are seriously louder than my five Ultra Kaze case fans that I previously had. -I beseech some company to put the card images on the side of the card where we can actually see it.