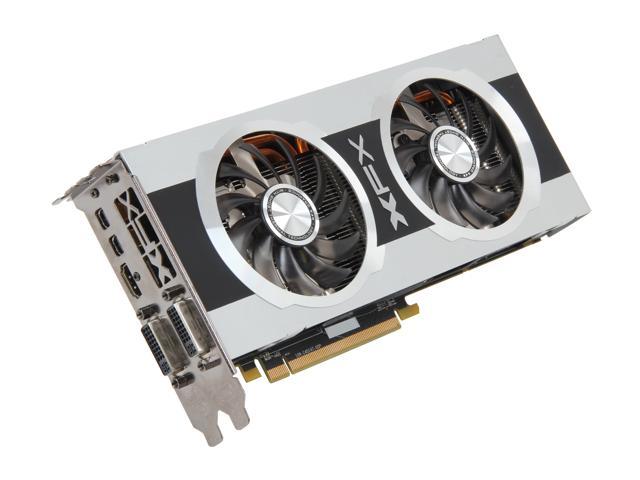 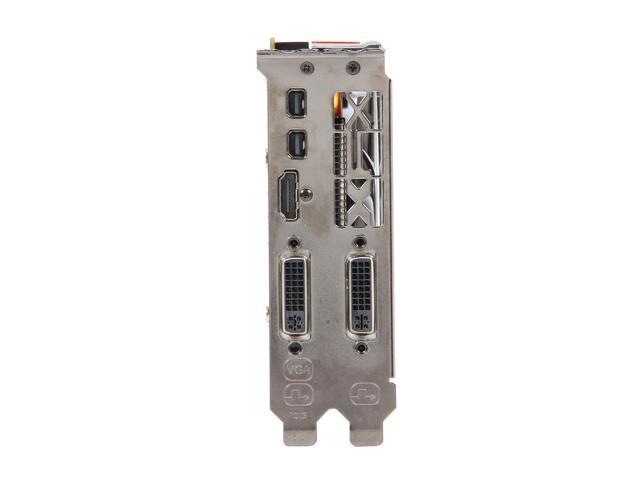 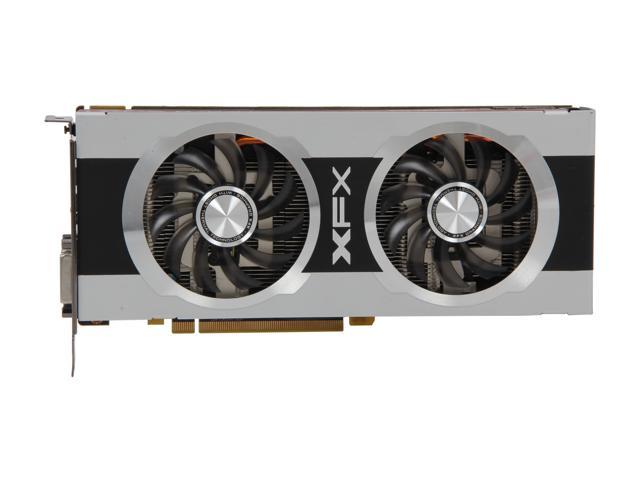 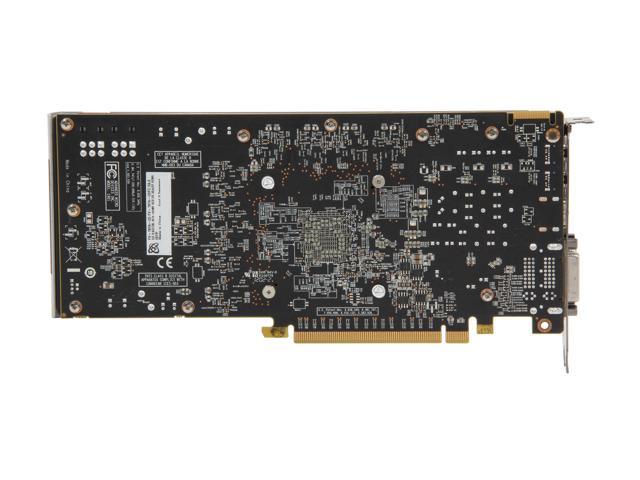 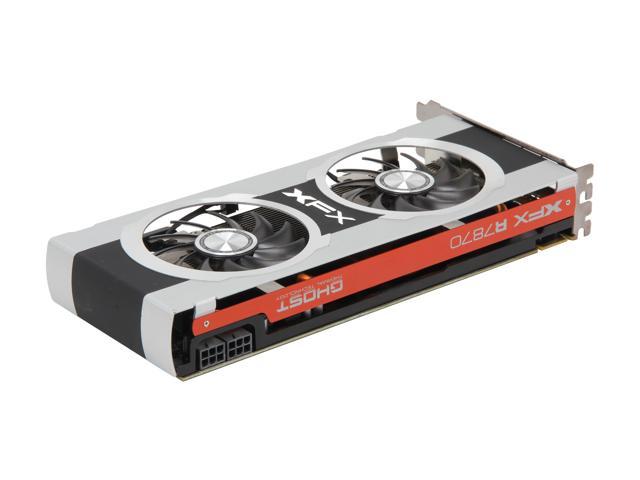 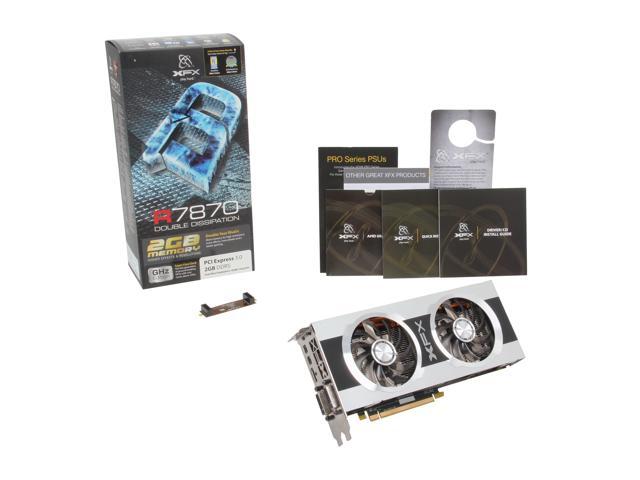 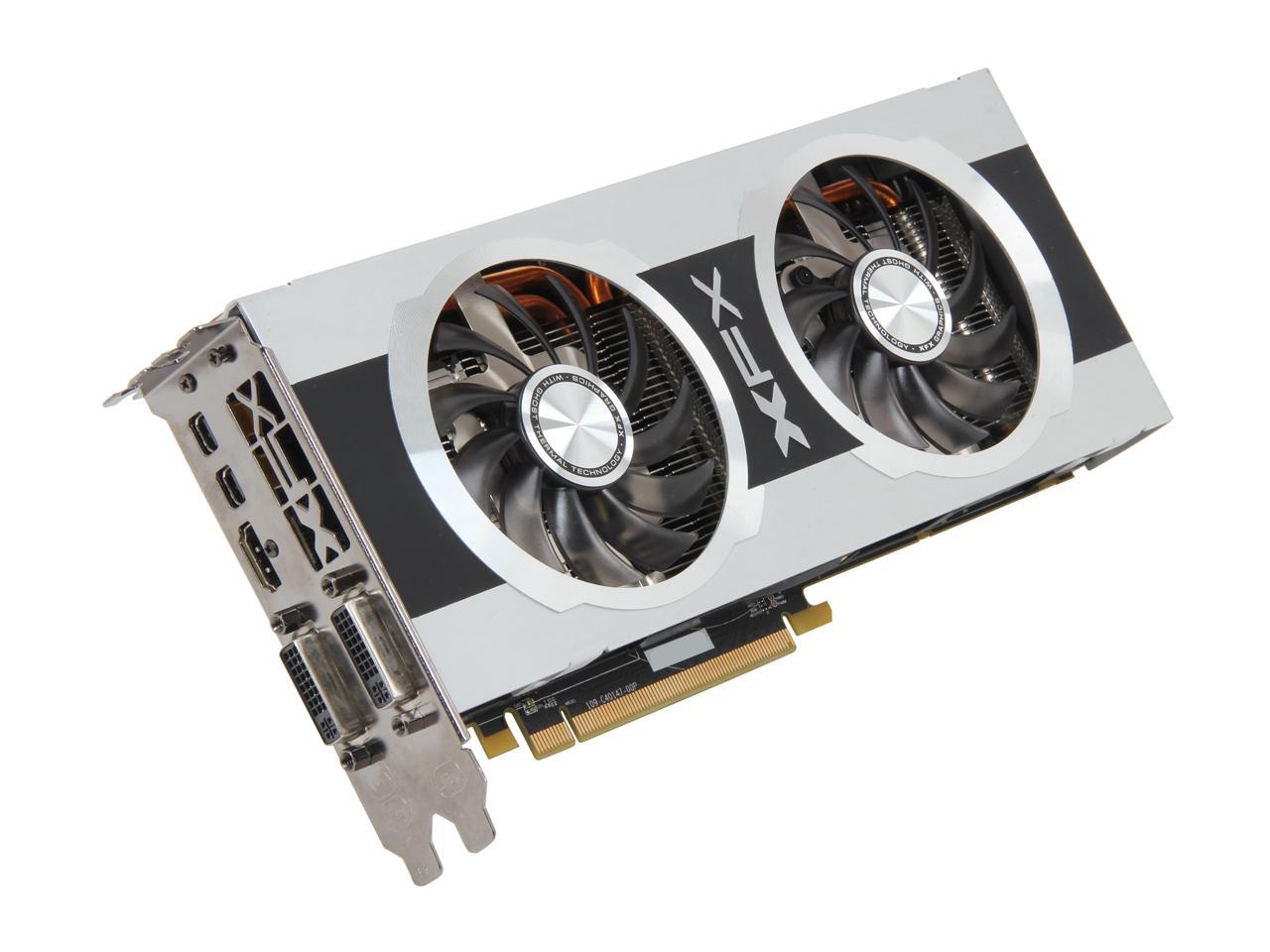 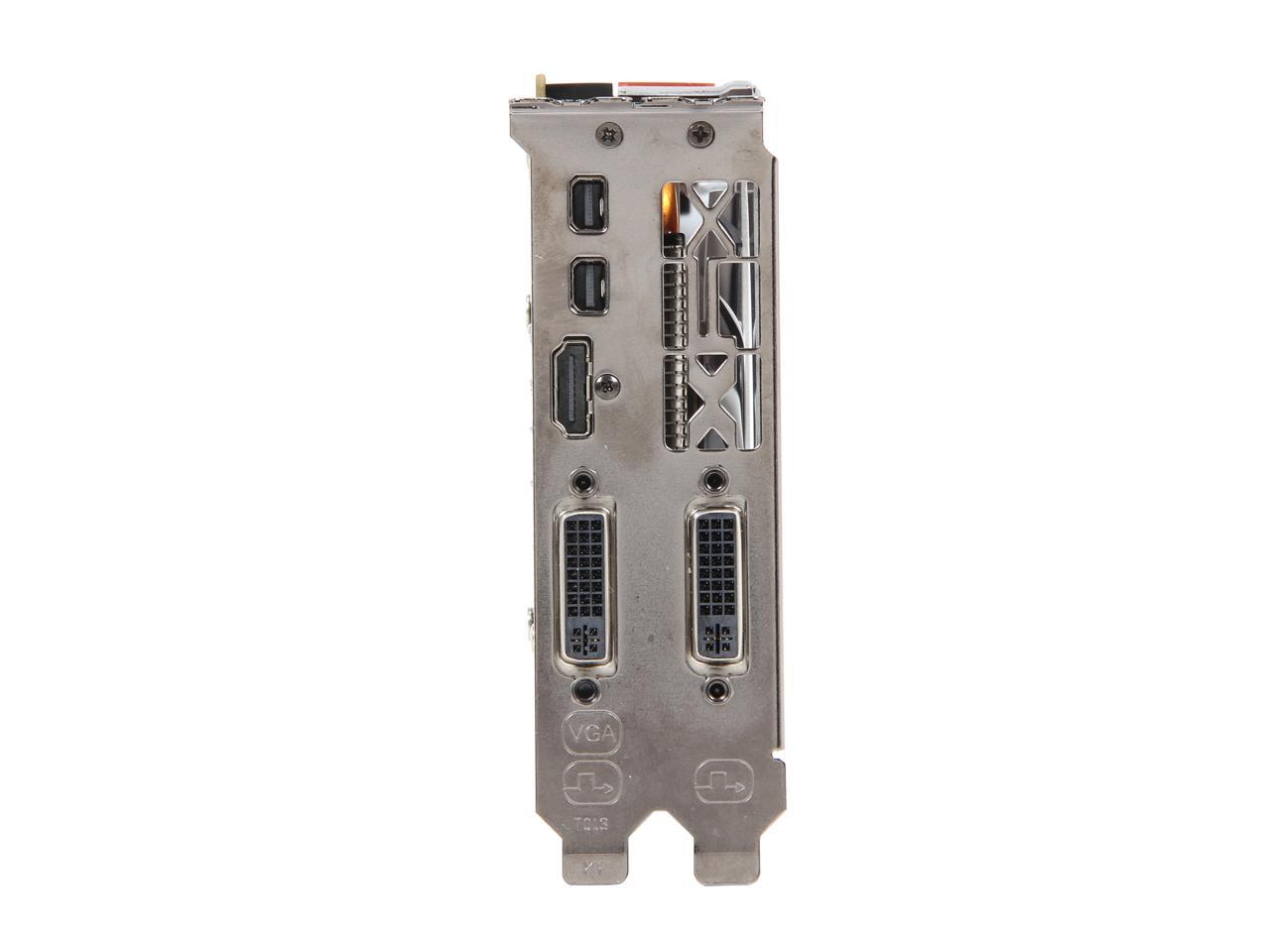 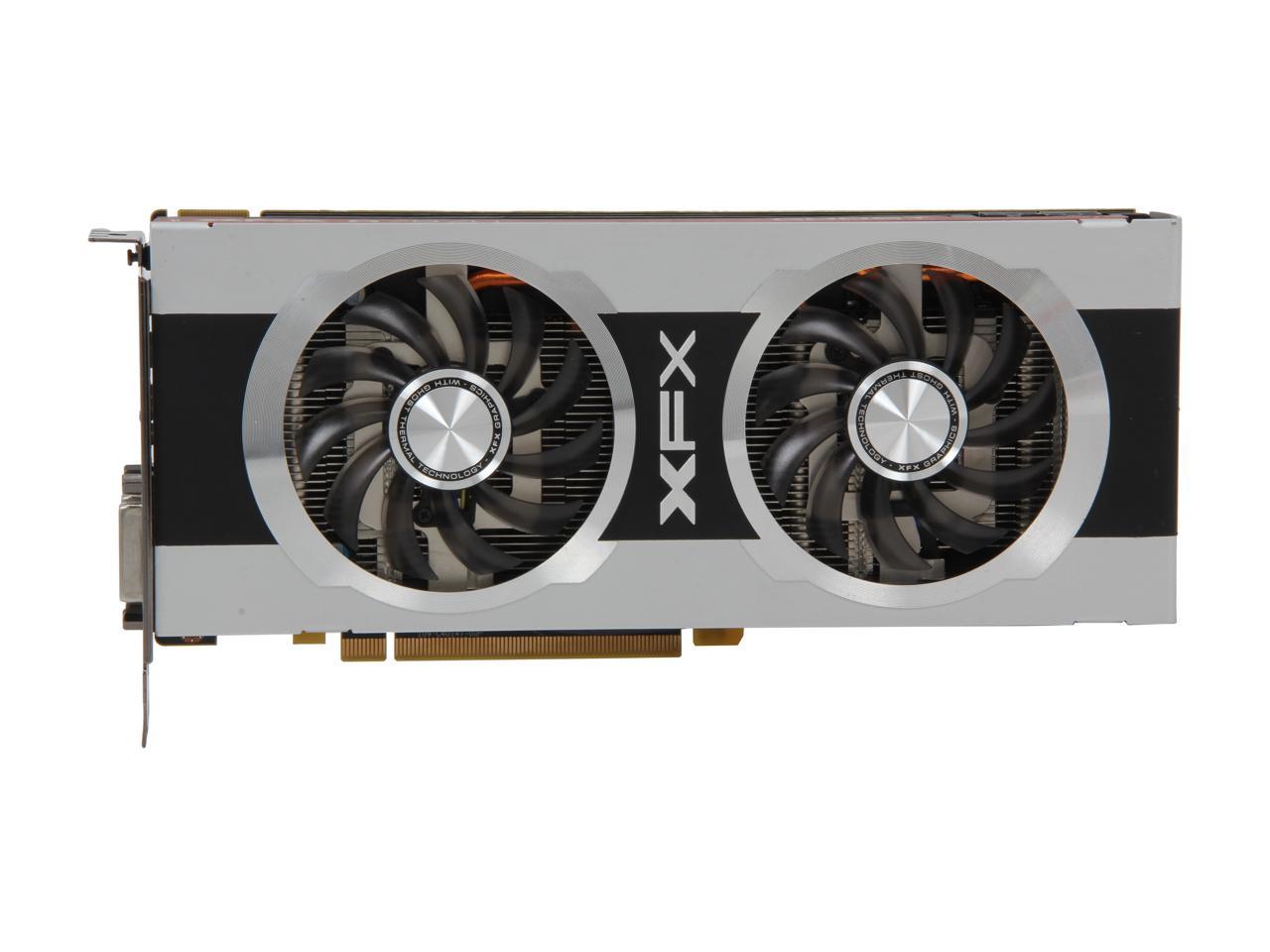 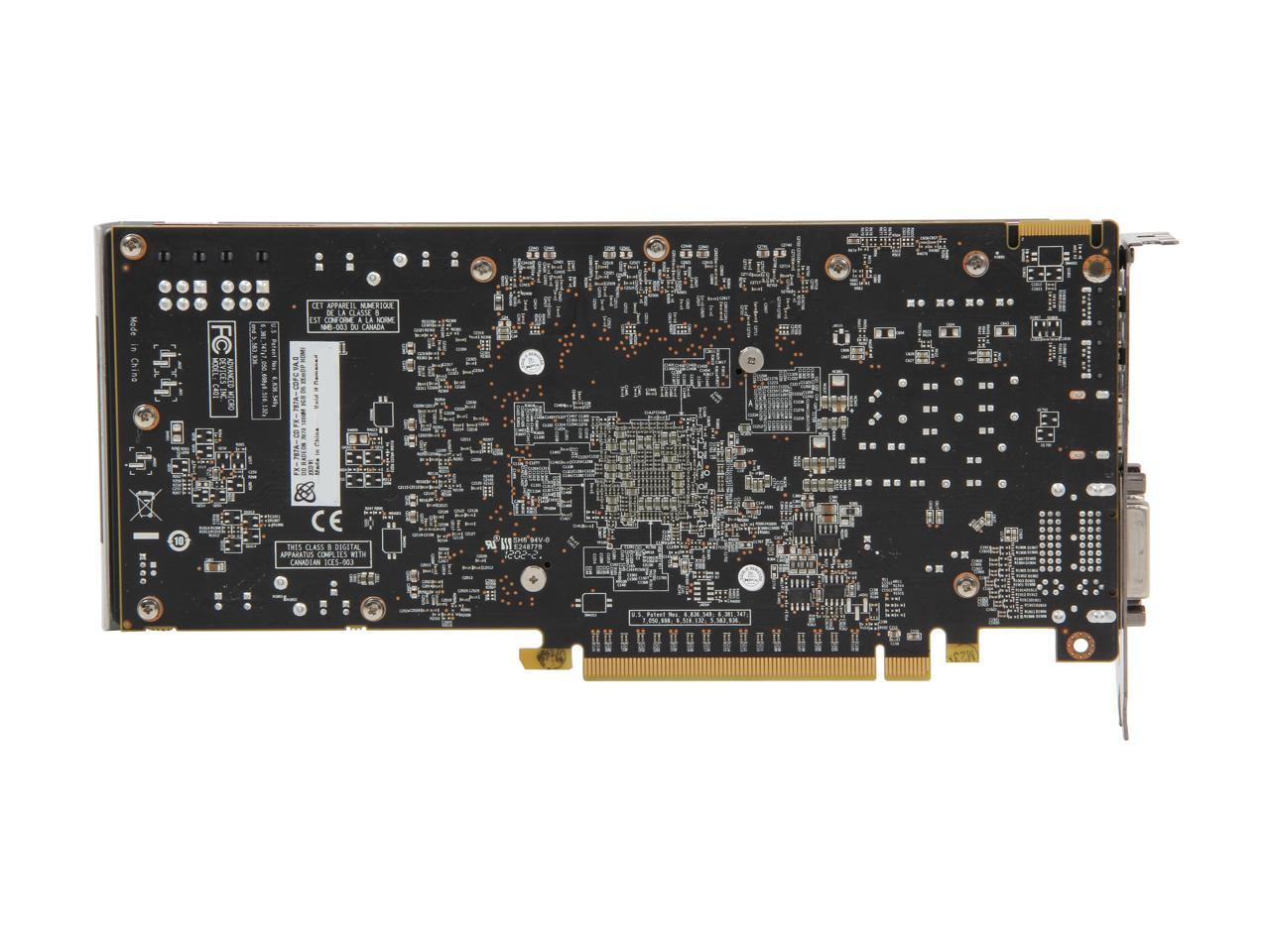 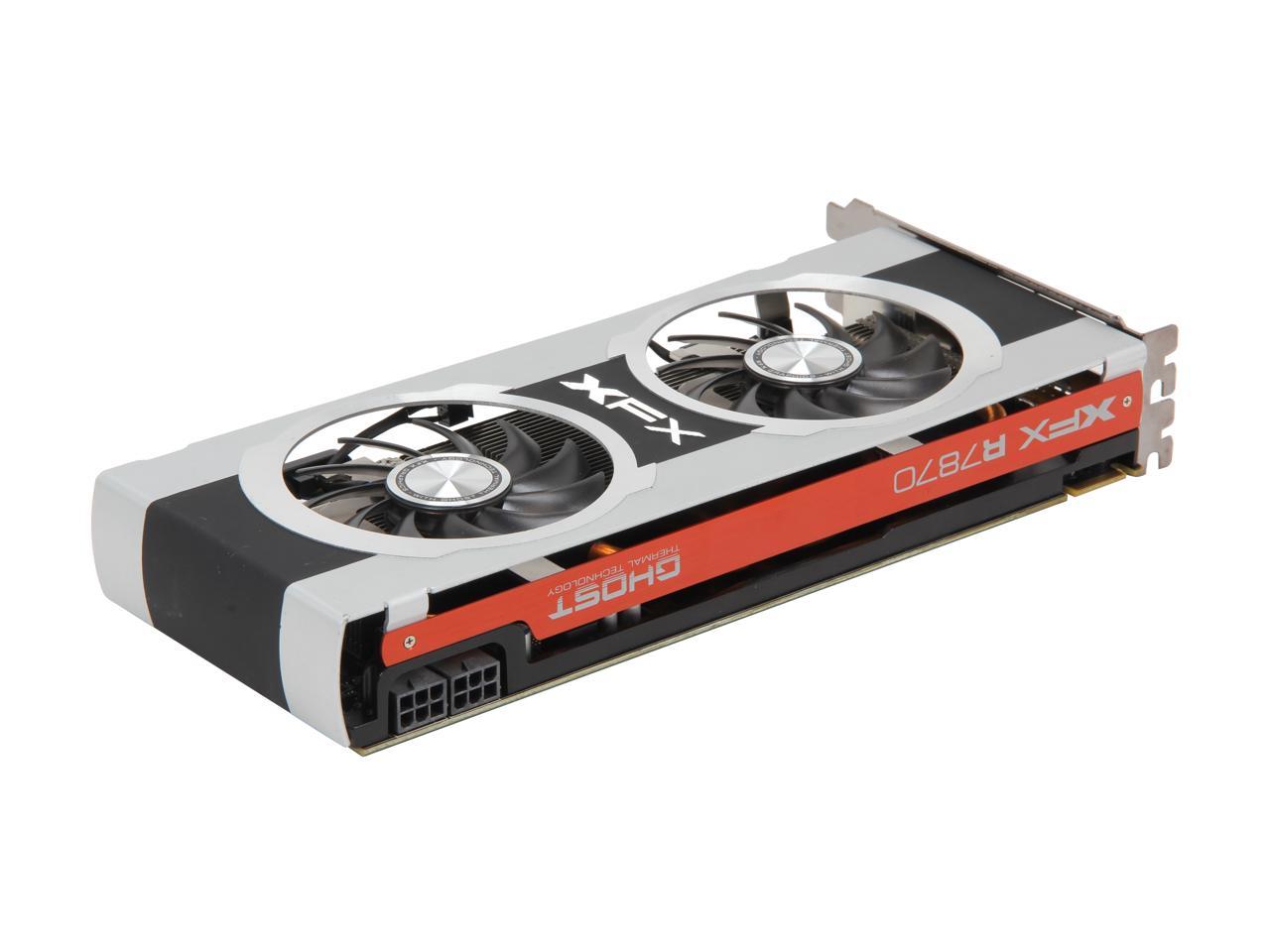 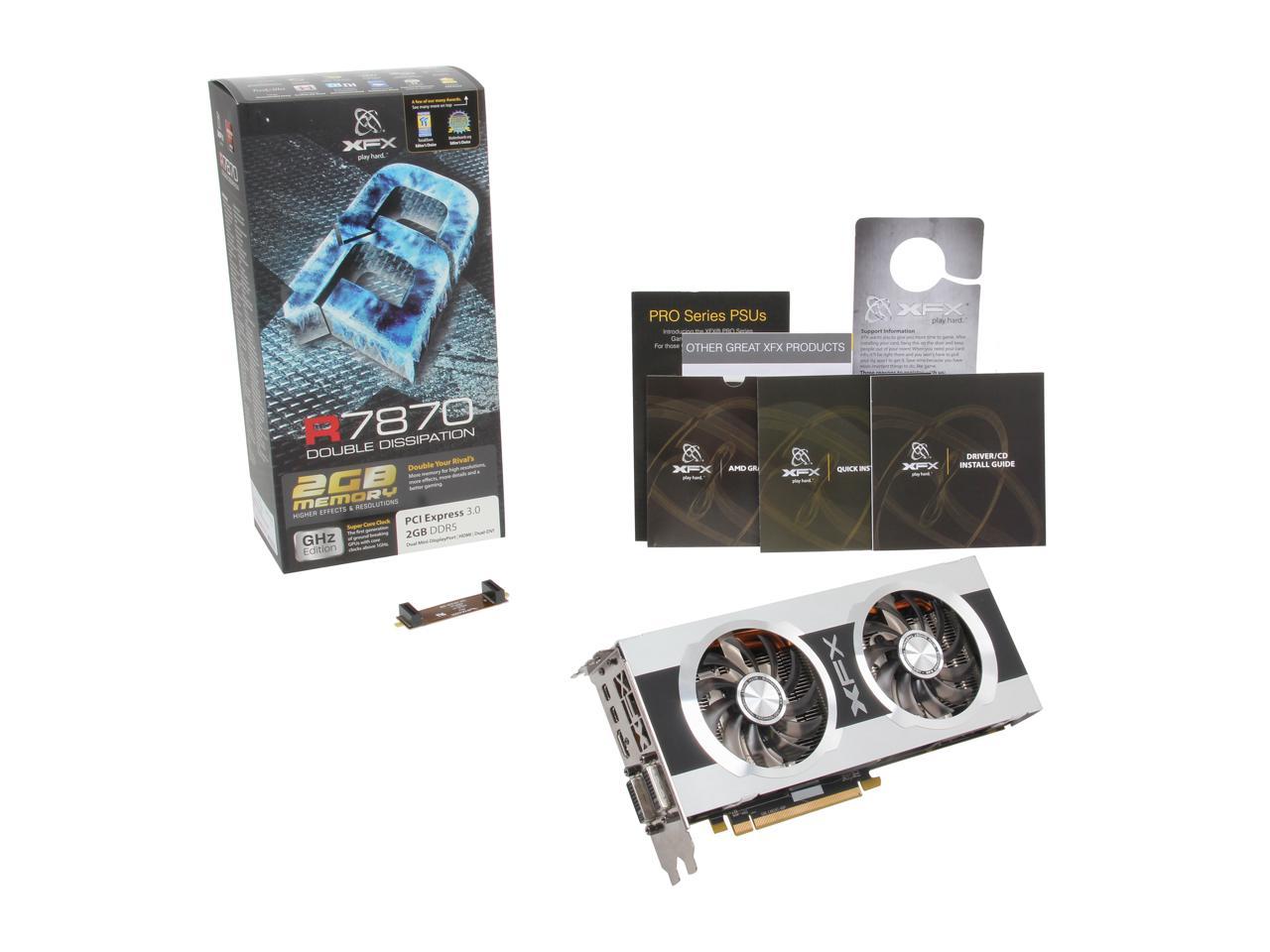 A weapon of choice for serious gamers, the XFX Double D FX-787A-CDFC graphics card delivers exceptional performance to render the latest blockbuster games with dazzling visuals and smooth framerate. Based on the award-winning GCN Architecture, these cards are engineered for supremacy with the industry’s very first 28nm GPU design. Packed with incredible features, such as support for PCI Express 3.0, the ultra-efficient AMD ZeroCore Power technology and gaming at resolutions up to 7680x3200 with AMD Eyefinity technology, serious gaming starts here.

Learn more about the XFX FX-787A-CDFC

Pros: Got this card last night. BF3 Ultra Settings 1680*1050 (my monitor's max resolution), I pulling about 70 FPS on average. Much more entertaining than a pet. The biggest thing on this card was the price to performance ratio. I was going to purchase a 660ti, did a little research and discovered this one would do what I need - and more.

Pros: I just completed a new build using this card, and so far, this card has run all the games I own on the highest possible settings flawlessly. Being able to turn up the graphics to max settings on games I've played for years and finally see all the glorious detail is amazing. It's like pixelated crack for my eyeballs; keeps me coming back for more! This card is definitely worth every penny you'll spend on it!

Cons: I don't all-together agree that this is a con, but the card is rather large, so you'll definitely want to be putting it in an ATX full tower.

Pros: I probably shouldn't review this card since I only just installed it today, but why not? I've had a chance to see the difference it makes, so here it goes! I upgraded from a HIS 5670 1GB card (I had two running in Crossfire for awhile, but had to put one of them in another system). In crossfire my HIS 5670's would do newer games like Skyrim at High settings with only 4x anti-aliasing turned on, but even then there was some lag. I installed this XFX 7870 card within minutes, fired up my build, downloaded and installed the drivers, and restarted. I immediately loaded up Skyrim to see just how well it would perform. To my surprise, Skyrim automatically detected my new card and set all of the settings to Ultra High (I checked all the settings, and they were turned up as max as they could go). I played for awhile and was just amazed at the difference...I could see campfires off in the distance, water looked more realistic, and there was fog, I tell you, fog! And I could see off into the distance, objects and people, and the world looked amazing, and there wasn't so much as a skip or hiccup, or even a graphical glitch. A tear formed in the corner of my eye. I then loaded up L4D2 (yeah, not the most graphic intense game ever, but still I had to see what it would do), and turned it up as high as it could go and the game ran so smooth, even when hoards of zombies were running at me and my faithful bots. I was spinning around with my axe, chopping off heads and throwing pipe bombs, and there was no blur or choppiness at all. My heart leaped for joy, my fingers shook with glee, as I pounded zombies into the ground on the highest settings possible. Unfortunately, my rampage had to be cut short because I had to work, but the time me and this card spent together were wonderful. I intend to taker her for another spin, and try out a bunch of my other games later on, but I would imagine that this card can pretty much handle any game I will throw at over the next year or two. I'm pleased with the quality and the price. It's worth every penny. My build: AMD 8 core CPU ASUS Mobo 16 GB Ram SSD as main drive HAF 922 Case

Cons: None as far

Pros: -Amazing price/performance. -Very cool and quiet. -Form-factor isn't huge. Looks good as well. -Room for overclocking. -Performs nearly the same as a 7950 in most games/applications. -Got it with a rebate!

Cons: -The whiner below shouldn't have docked an egg because the price changed. THAT'S HOW THE WORLD WORKS. When a product is released, it is usually MSRP... As time goes on it slowly drops. If you had waited to do your review months from now, you'd be giving it one egg because you were 'ripped off' by ~$100... Lame.

Cons: Ran really hot. I couldn't get it to stabilize at anything below 92 degrees when running valley. Exhaust blows towards the front of the case instead of out of the back. Voltage locked.

Overall Review: I really wish this card would have worked out. The stock clock settings are impressive for the price. Double check what gpu you actually get. Mine came with a modified Tahiti chip which would have been an awesome bonus if it didn't run so hot.

Cons: The fans can get a bit loud and this thing can run hot if you crank up everything to the max in games like Crysis 3. I've actually had it overheat, but I probably just need better cooling in my case. I bought this about 3 weeks before the price dropped... but that's what I get for being impatient and wanting a new system after 4 years of the same thing.

Overall Review: Highly recommend this for gaming. I haven't tried animation yet, but I'll get around to that when I have time again. If I had money for another, I'd totally Crossfire them.. but alas, I don't.

Pros: Quiet with fans set at 60%, Did a burn-in using FurMark which puts a pounding on any card checking for stability. 1300mhz seemed to be the breaking point on the gpu as the stress test would lock it up. Brought the core back down to 1200mhz and did a 30 min burn-in with the temps reaching 67 C with fan left running at 60%. The memory could run at max using CCC during burn-in but these cards don't seem to be limited with memory bandwidth so not really gaining much by overclocking the memory alot. I settled for 1300mhz on the memory. Picked up around 6 fps with this overclock and left the FurMark running for an hour with no problems and temps remaining at 67C for the high. Upgraded from a 6950 after it went bad on me and the 7870 averages about 20fps more with graphics all maxed in my games. Dual fans do a great job keeping it cool and remaining quiet. My cpu and northbridge chip is watercooled so overall I'm well please with the low noise level.

Cons: Even though it has an exhaust vent on the back, most of the heat is being exhausted into your PC so do keep that in mind if you have overheating problems with your PC. I have a 120mm fan on the back just above the card which I tied into speed controller and it pulls most of the heat out really well.

Cons: On XFX web site it says this card is 9½ inches long but it's not. From the face to the back end is 9 7/8. if you remove the metal cover itself it is 9 3/4 and the card from the face is about 9 3/4. Easy enough to remove the face to barely make it fit in my Lian Li aluminum ITX case. The latest driver as of today (catalyst 12.8) from AMD will not work with windows 8. have to use version 12.7.

Overall Review: Tried catalyst 12.8 in a windows 7 machine with an old i7 and worked great. Pretty good card. Only purchased because its shorter than others and that spec was wrong. Boo on XFX. Always love Newegg. Thought I was going to have to permanently modify this card to make it fit voiding the warranty but alas I did not. Mine is very very quiet. Rosewill RCX-Z90-CP processor fan is super loud tho.