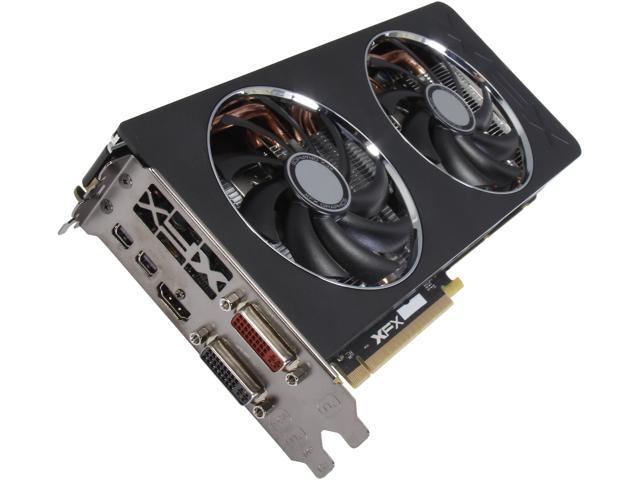 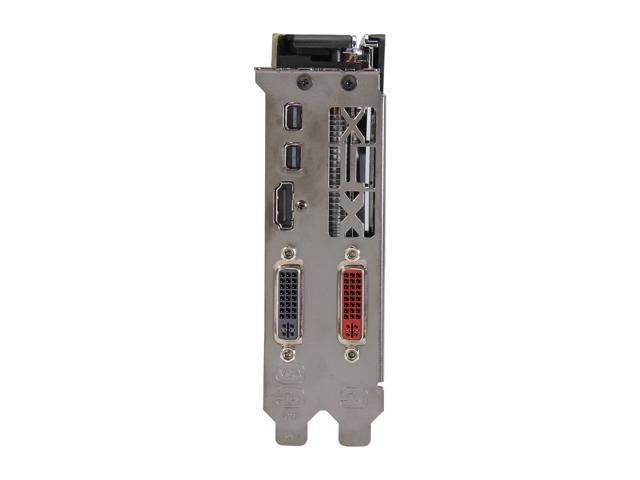 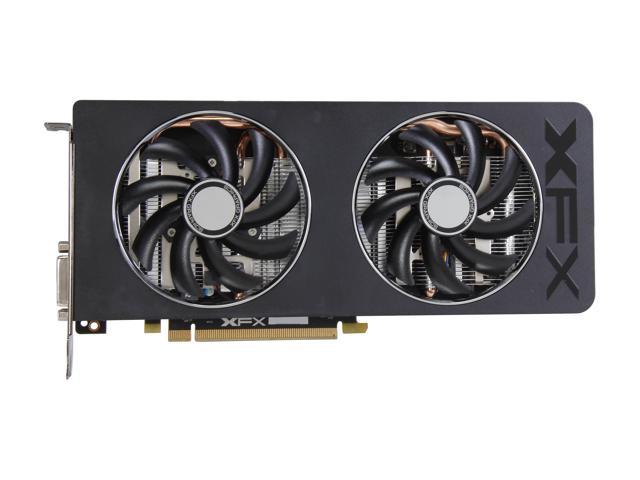 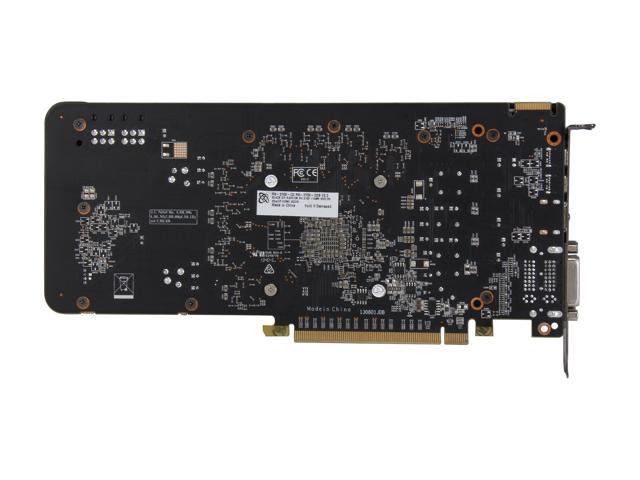 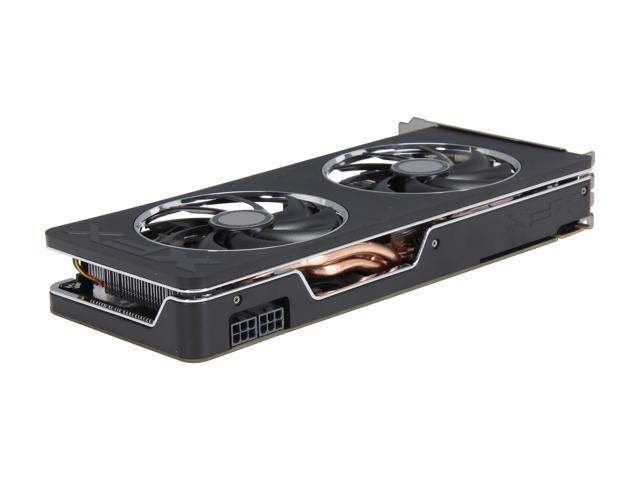 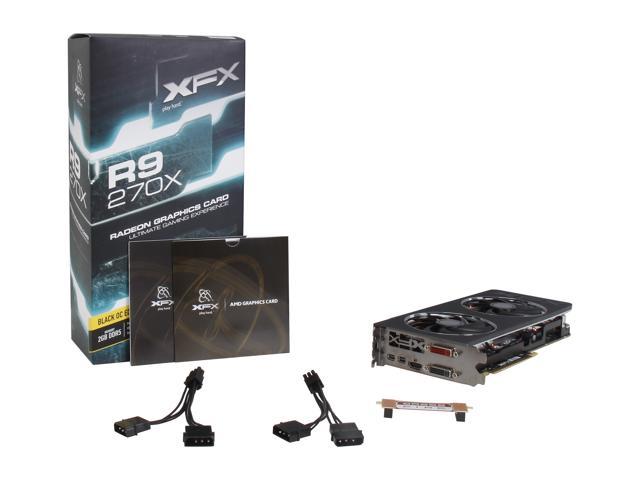 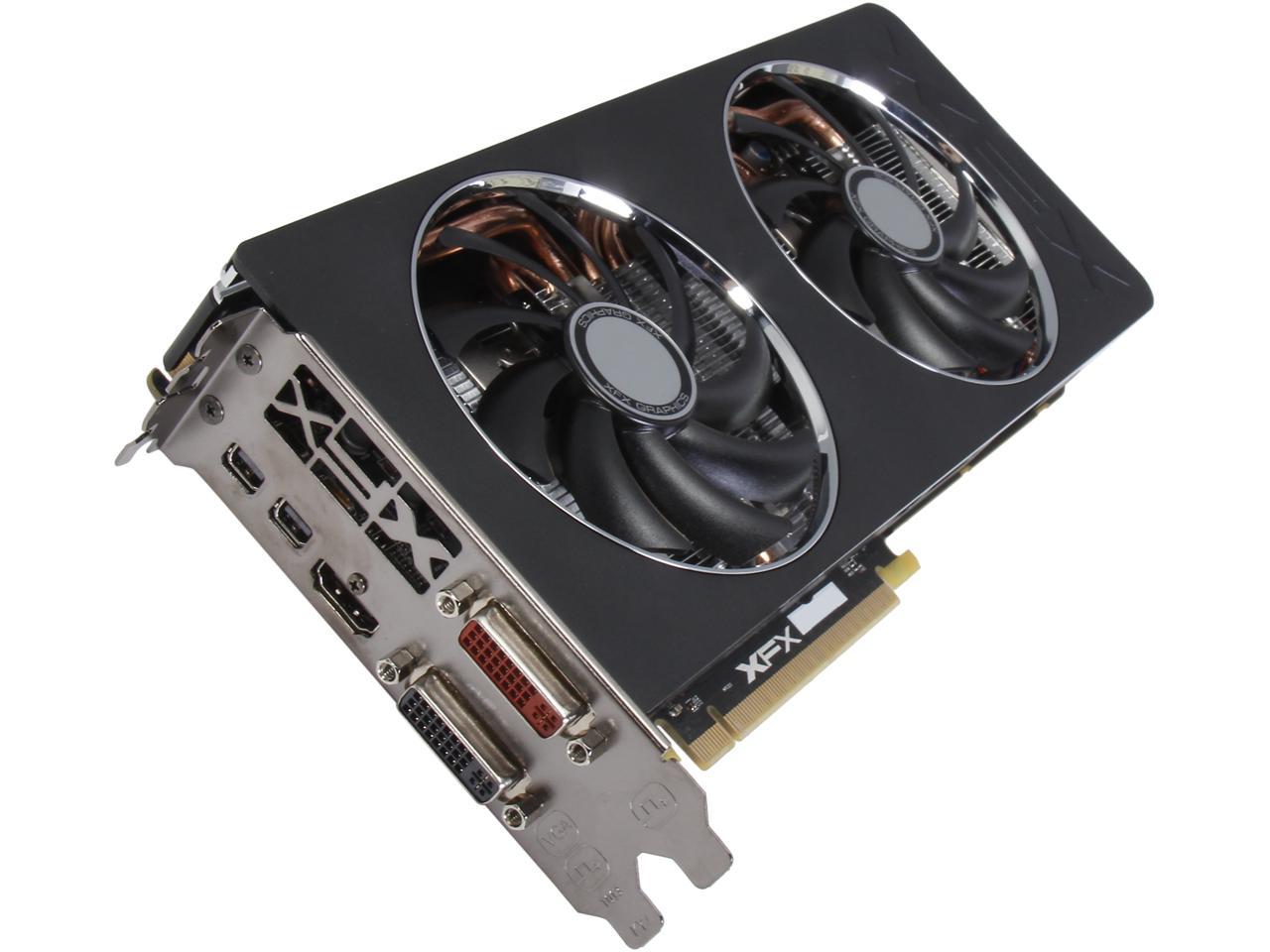 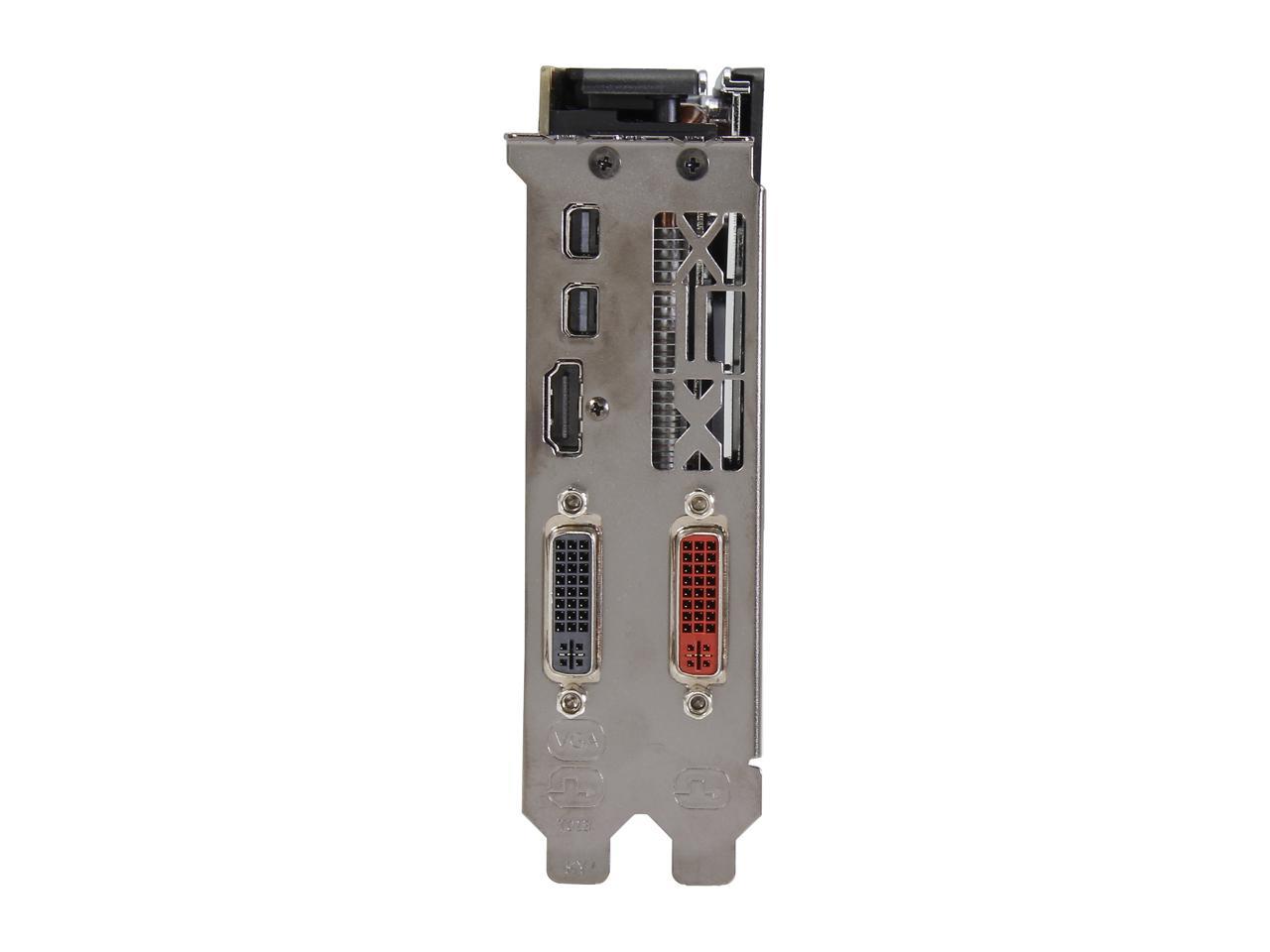 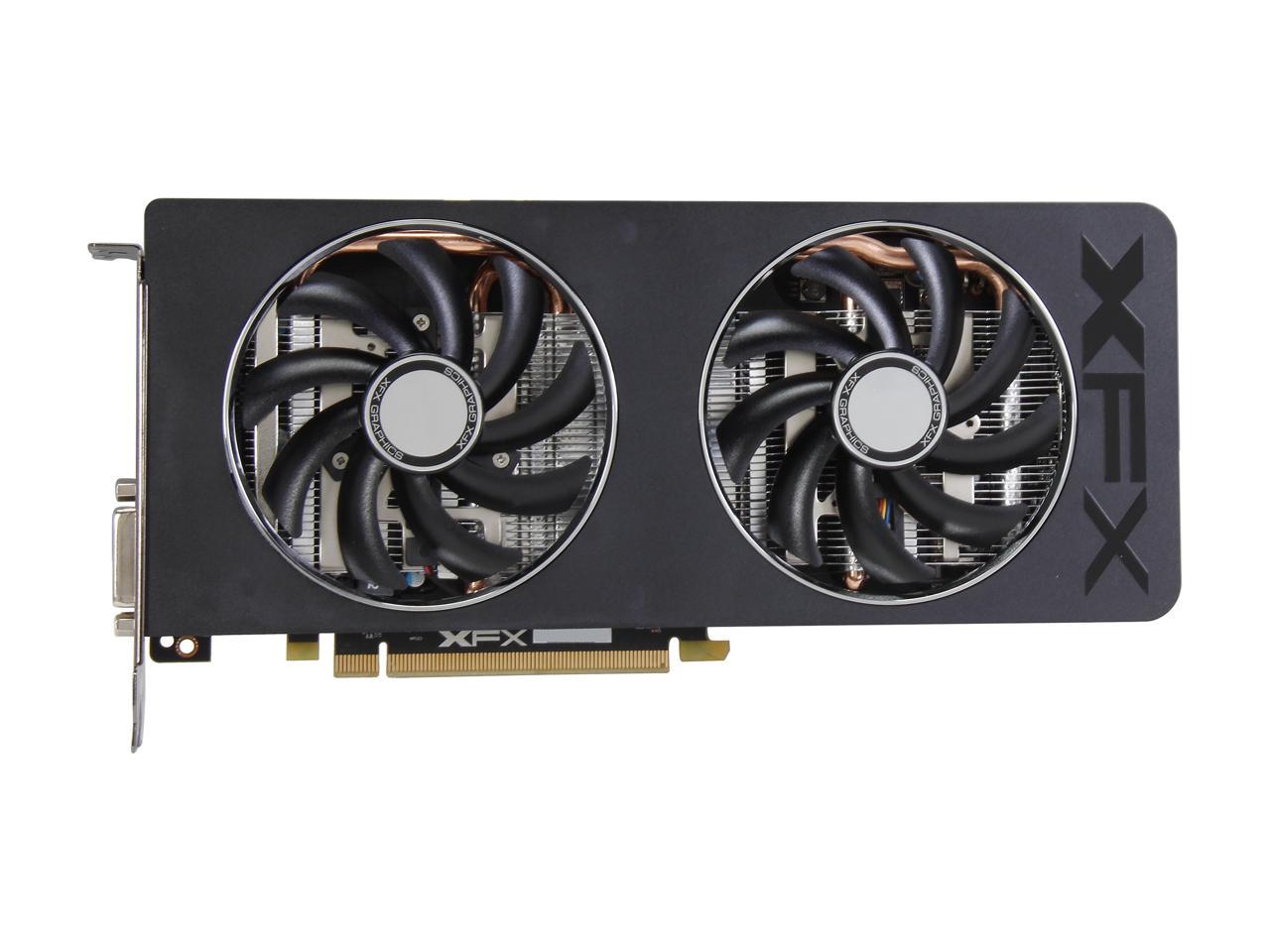 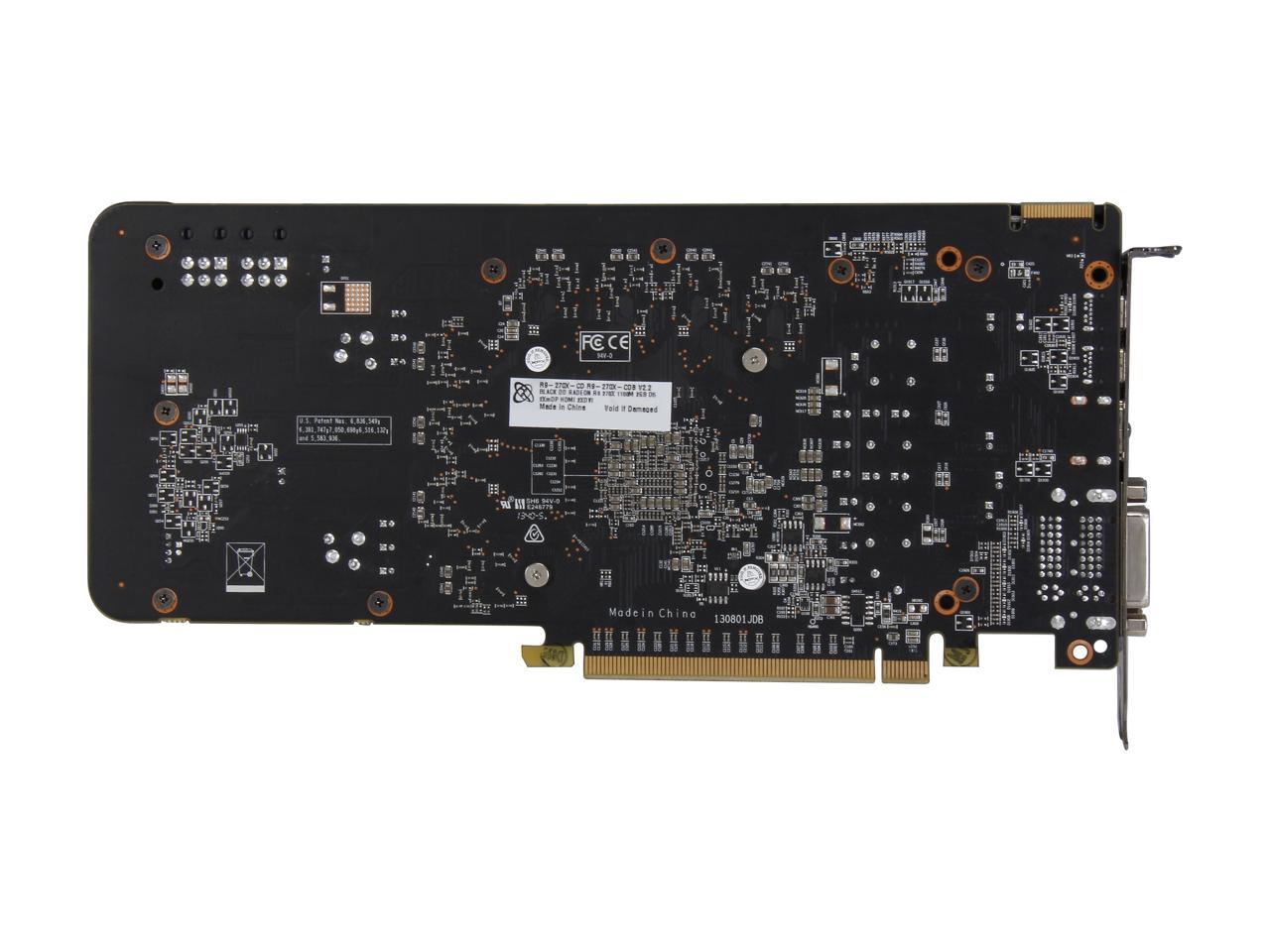 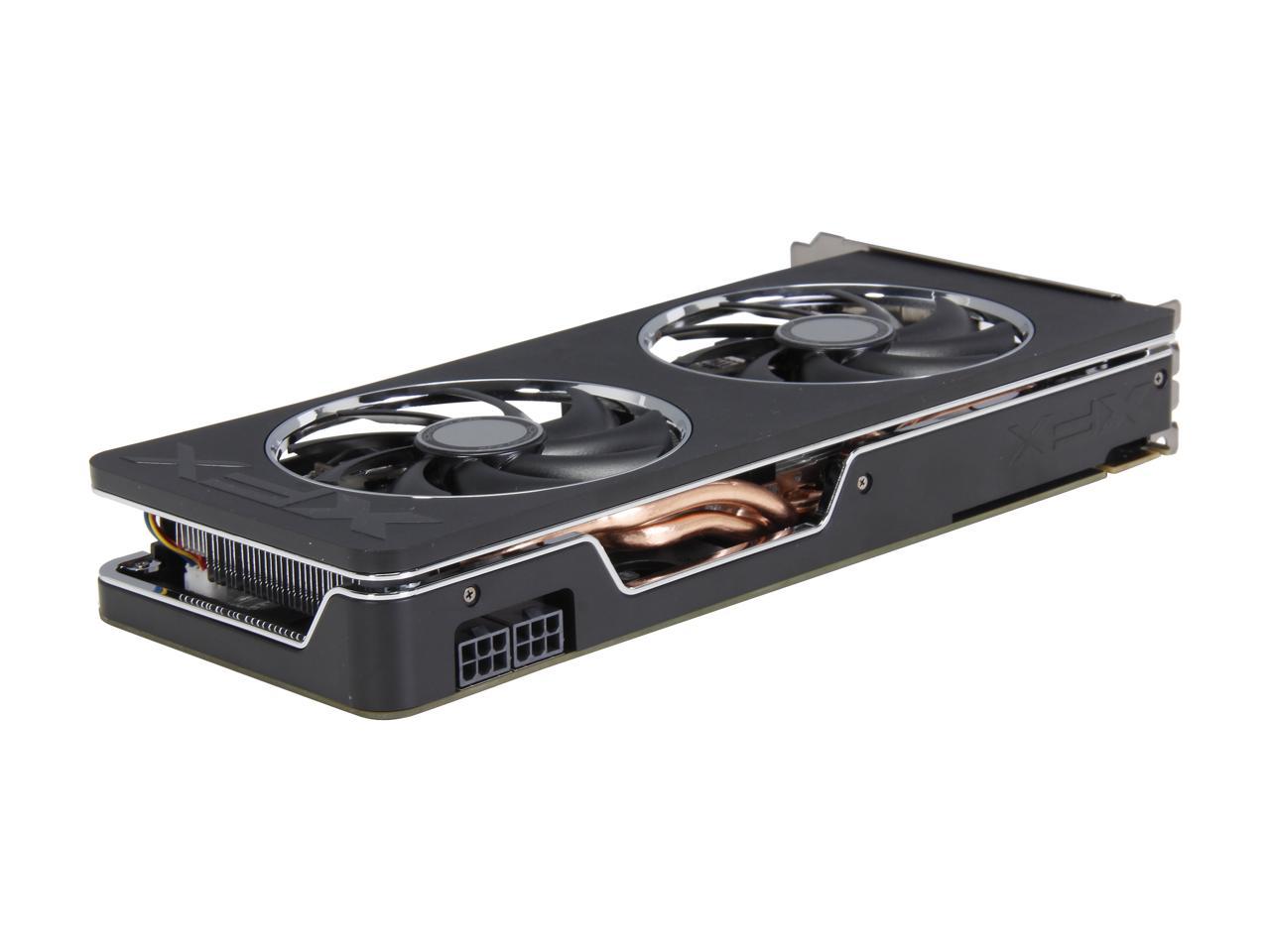 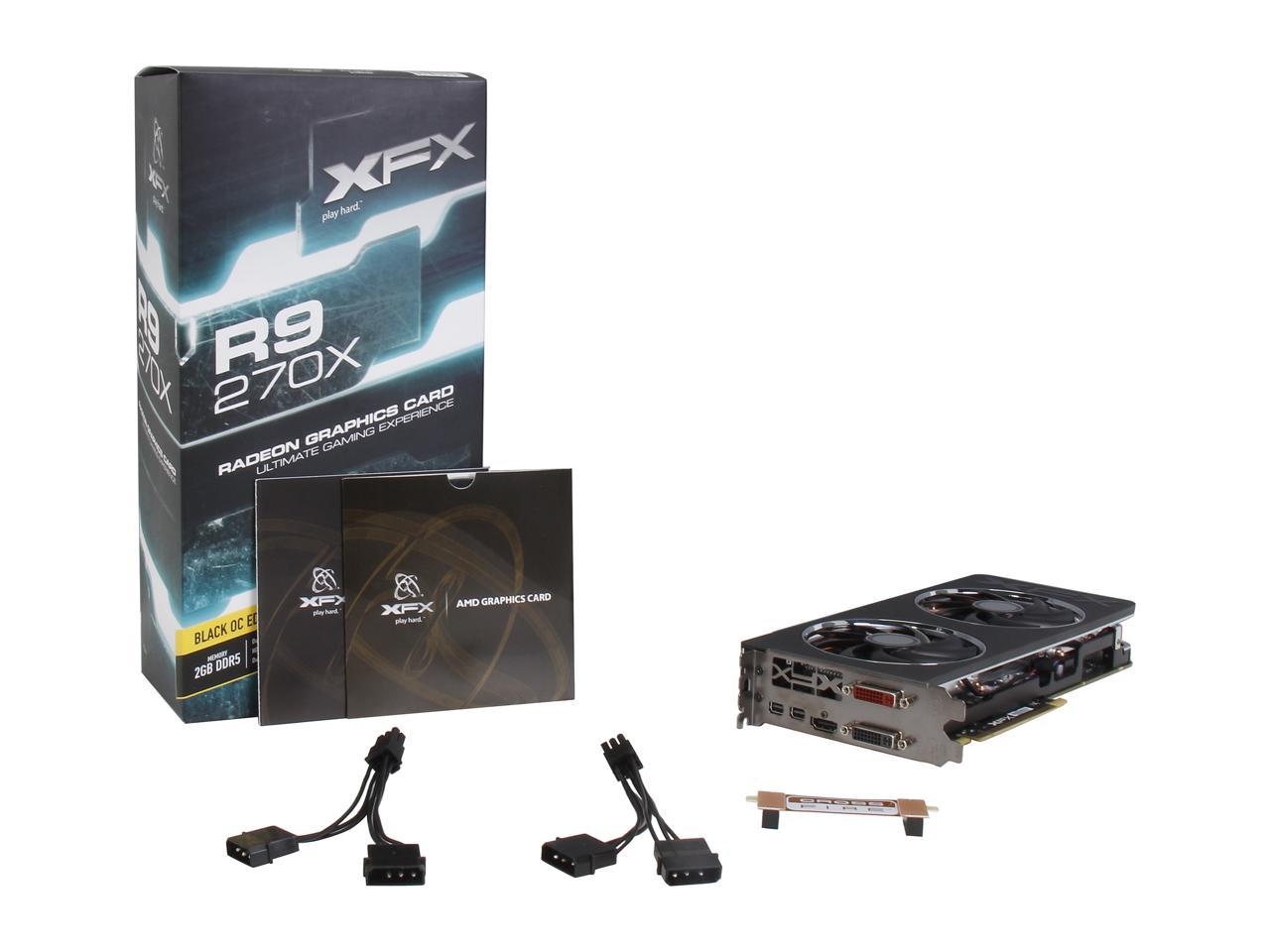 XFX's exclusive Black Edition graphics card are the most rigorously tested graphics card. They are pre-overclocked to the maximum core clock achievable and come from the highest quality yield GPUs which make up the top 1% of those produced in the world. In addition, we pair it with the highest quality components to ensure there are no bottle necks so you can be certain you are getting the best graphics card possible on the market today.

XFX's exclusive ghost thermal 2.0 design creates a floating heatsink with open airflow between the PCB and the cover so that air can quickly ventilate off the card while simultaneously cooling the core process and the components. We've also made major advances from our first generation which includes a heat tested light weight plastic to create an overall lighter thermal which reduces the physical strain on your gpu.

XFX's exclusive dual fan double dissipation design utilizes two larger fans which run at slower RPM than comparable single fan soltuions which must run at much higer RPMs just to barely achieve the same cooling needs. Because of this design, XFX is able to achieve up to 13dB lower noise than the competitor while simultaneously increasing the overall cooling by 7°C.

The Details Of Tesselations can Make the Difference Between a Flat, Dull Surface and a Realistic, Bumpy Surface

XFX graphics cards offer the highest Tesselation capabilities while still maintaining the higest performance. We don't sacrifice one for the other so you can expect to get the riches detail in your games without slowing down your gaming experience. See bumpy roads, textured fabrics and realistic rippling waters with high Tesselated graphics from XFX.

Take advantage of the 3D Physics capabilities of some of today's newest titles which include completely destructible objects, walls and buildings collapsing from gun fire, real particle effects such as fire that react to the environment and realistic details such as moving hair, water and much more.

Radically Change the Detail of Your Games from Flat to Realistic

Even in the latest titles, gamers may have noticed that games often reuse or repeat textures, particularly on the ground or in background scenery such as mountains or trees. This is because increasing the physical size or number of textures in a game can have a negative impact on the performance of a GPU. PRT is a radical technology that hopes to break this cycle.

Learn more about the XFX R9-270X-CDBC

Pros: It is said that this card will play BF4 on ultra. We shall see.

Cons: The price should be lower as all the cards should be. The R9 cards have gone up in price because the litecoin mining is at its peak but will fade away as the bitcoin mining has. Or as the profit in it has. There is going to be a lot of broke az people trying to EB the cards. I think in 3 to 6 months you'll be buying 280x, 290 & 290x at two for one pricing. Miners will have no use for all the extra cards. and buyers will not pay top dollar for used ran to death cards.

Manufacturer Response:
Hello and thank you for the great review! If you have any questions, please contact us at neweggsupport@xfxforce.com. Play Hard!
Anonymous
Ownership: 1 week to 1 month
Verified Owner
Beast6/9/2014 9:49:04 AM

Pros: This card is in beast mode. You can just crank up graphic settings to max on anything and this video card gets the job done quietly. What a top quality from XFX, im impressed over all. 5 eggs accross the boad, get your moneys worth!

Cons: None at all. Nothing, nada zero zilch

Manufacturer Response:
Thank you for the great review. We appreciate the positive feed. If you have any questions, please contact us at neweggsupport@xfxforce.com. Play Hard!
Amy S.
Ownership: 1 week to 1 month
Verified Owner
Great card for the price.12/30/2013 5:38:11 AM

Pros: There is a great deal of confusion on the way this card is listed and I see a few questions that I would like to clear up. This card did come with BF4 from XFX at my time of purchase. The difference between this card and the other one Newegg has listed is this is the Overclocked version. Meaning this card factory made to be slightly faster than the standard version. Overall this card has run flawlessly for me and was a big upgrade over my 6870. It runs BF4 and Metro Last light with no problems, just make sure you gat the latest drivers from amd.

Cons: This card is huge. It is 2 inches longer than my motherboard but fortunately I have a Fractal Design R4 case. If you have a small case this card may not fit.

Manufacturer Response:
Thank you for the great review! if you have any questions, please contact us at neweggsupport@xfxforce.com. Play Hard!
Sesha R.
Ownership: 1 week to 1 month
Verified Owner
2/7/2015 8:57:35 PM

Cons: Having a hard time getting it to run my Dell 3011 monitor at 2560x1600 resolution with DVI...tried a couple of different DVI cables. HDMI gives me only 1920x1200. At wit's end..don't know what to do. Their support site is too cumbersome-can't even call them for help without divulging my grandmother's personal health details.

Manufacturer Response:
Hello Redsam, Our tech support # is listed on our website under support: 800 880 3225. If you dont want to divulge your personal details, you are welcome to insert false data. We only use it to mail you back your replacement card. If you provide the wrong address in your shipping address, it could cause complications. You have a 2560x1600 so you need to run a Dual-Link DVI cable to the graphics card and it should automatically detect it when you restart once or twice. We appreciate the time you took to write this review. If you have any questions, please let us know. XFX Support Neweggsupport@xfxforce.com
Robert P.
Ownership: 1 month to 1 year
Verified Owner
Good Cards12/24/2014 5:44:18 PM

Pros: Have 2 of them in Xfire Setup Runs any game and no problems with the cards.

Manufacturer Response:
Hello, Thank you for the great review. If you have any questions, please let us know. XFX Support neweggsupport@xfxforce.com
Michael R.
Ownership: more than 1 year
Verified Owner
Loved the Card9/19/2016 11:01:19 AM

Pros: I bought this card for my 1st build and it was easy to install and set up. It was quieter than I thought it would be even when I ran my games at max settings.

Cons: It died on me 2.5 years into its life and even though it has a life time warranty it wasn't honored since I did not register my card.

Overall Review: I would still recommend this card since it treated me well while it worked.

Manufacturer Response:
Thank you for the review, we really appreciate you taking the time to write it. If you have any questions, please let us know. XFX Support Mark at XFX Neweggsupport@xfxforce.com
David G.
Ownership: 1 month to 1 year
Verified Owner
Support doesn't actually read emails sent3/9/2015 8:31:10 PM

Pros: Excellent FPS and smooth gameplay. Came with 3 games via the AMD promotion, only one of which I ended up playing (Alien Isolation).

Cons: Hate and I mean HATE Catalyst software and especially AMD Evolve bloatware. Don't get me started on unreliable drivers. Never had issue with Nvidia in my life. Had an issue where no matter what monitor I plugged in to wither DVI output the primary would randomly SCRAMBLE when I moused over to my secondary monitor. I had to reboot to get the darn screen back to normal. HDMI simply would not work at all! (Found that out after the 30 days were up). Epic failure and had no luck finding a solution via support.

Overall Review: I sent VERY detailed info and the responses I got indicated that support had ignored much of what I told them. They only replied 3 times then stopped responding. Should have just returned the card but decided to keep trying to troubleshoot on my own and ended up past 30 days. So I boxed it up and will try and sell it. Such a waste of time and money.

Manufacturer Response:
Hello Grandmasimulator. Please send your emails to neweggsupport@xfxforce.com or create a ticket at xfxsupport.com. Your card should still be in warranty and should have no issues with being offered an RMA replacement. Thank you XFX Support
Mike N.
Ownership: 1 day to 1 week
Verified Owner
Great Card1/12/2015 1:03:56 PM

Pros: Benchmark at 5721 on my system, compares to cards costing $350 and more. Was easy install, exactly same set up as previous card (AMD 6800HD) which died. Took 3 day ship option, was here next day (nice) shipped from LA area and I am in Phoenix. So far, so good. No problems.

Overall Review: Only 4 stars because it is still new. Could be 5, just not sure yet.

Manufacturer Response:
Hello and thank you for the great review. We appreciate your feedback. If you have any questions, please let us know.