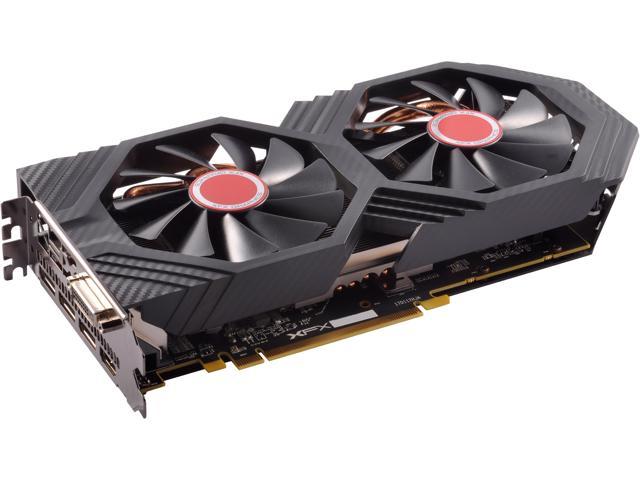 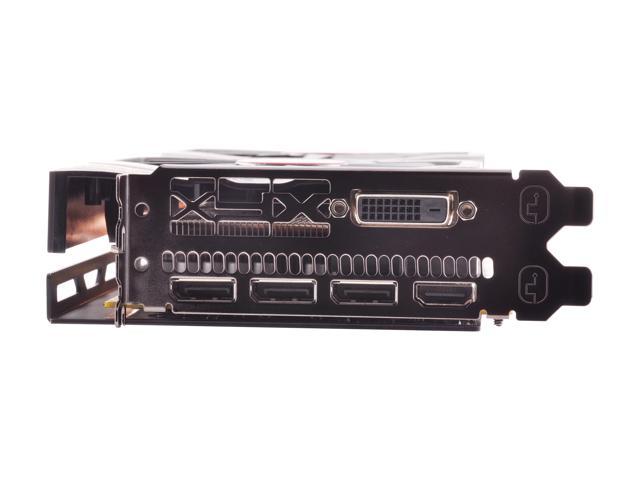 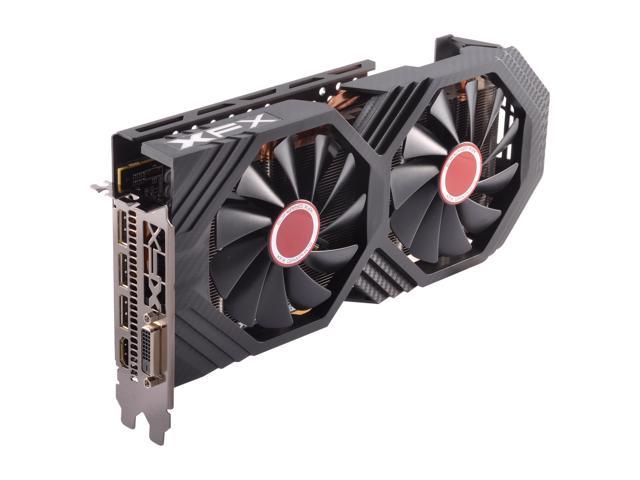 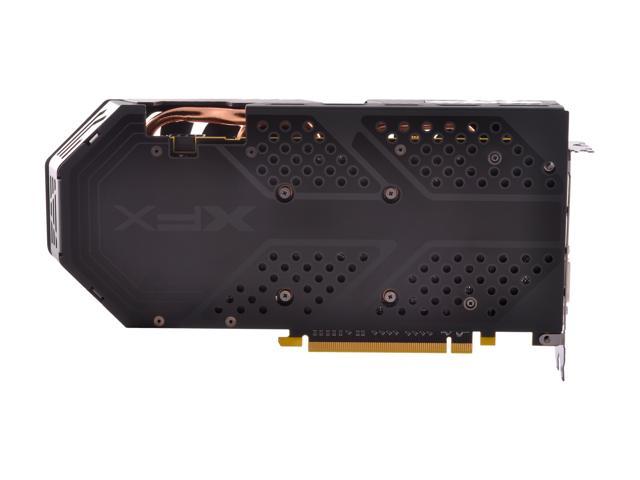 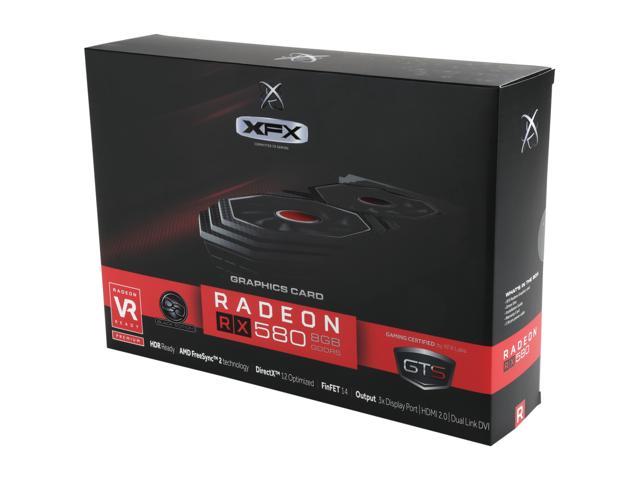 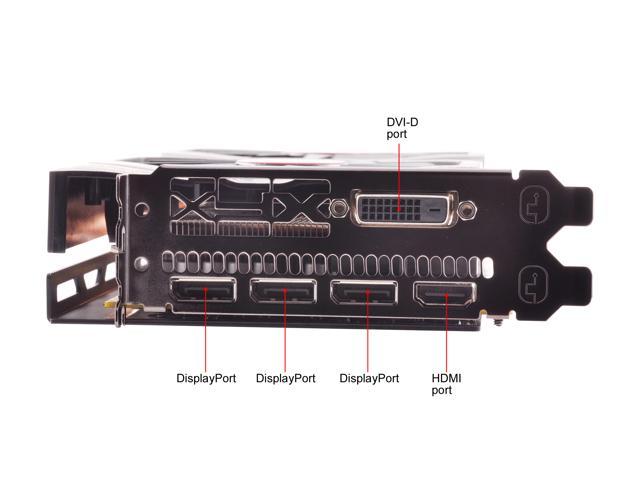 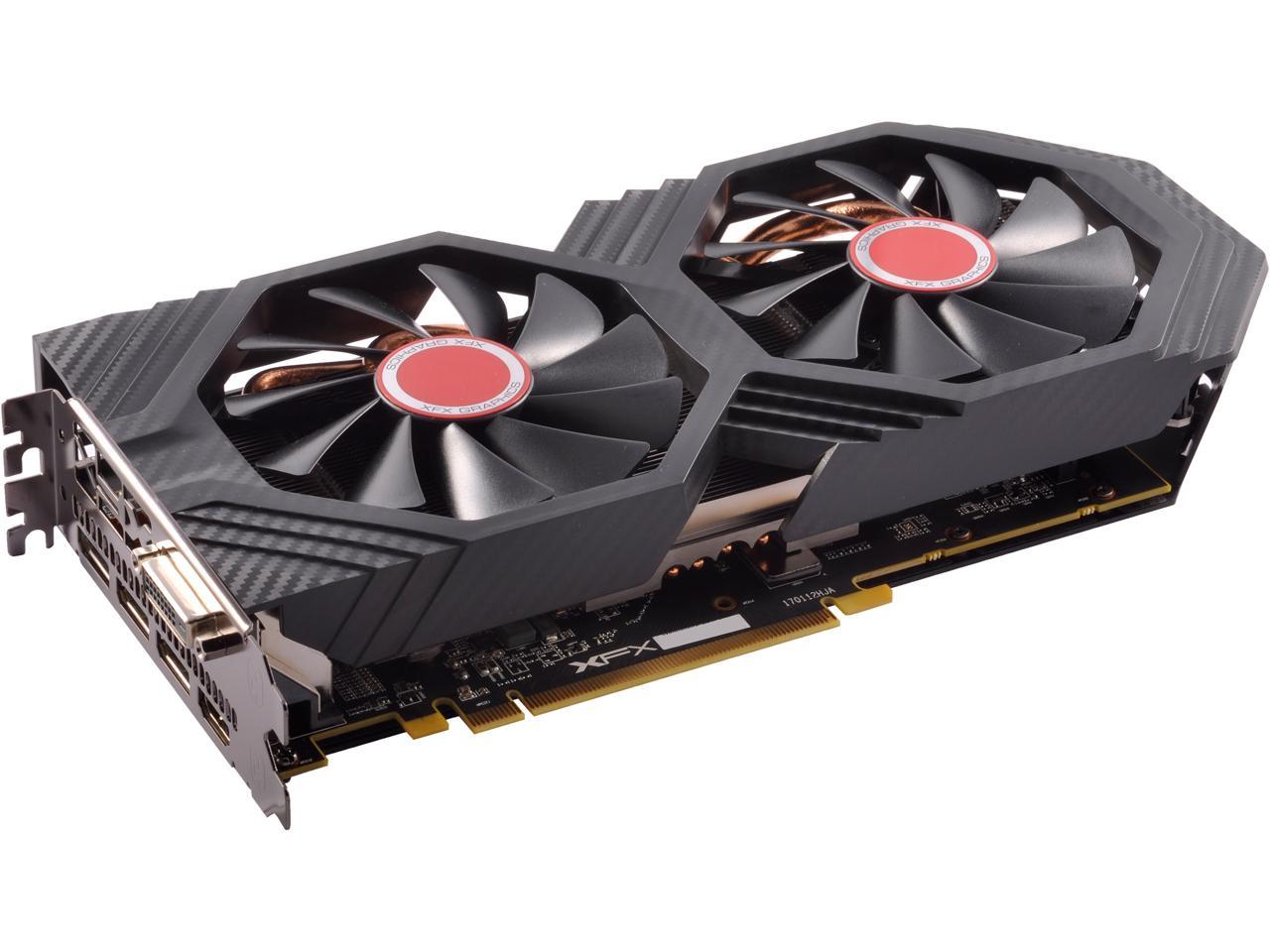 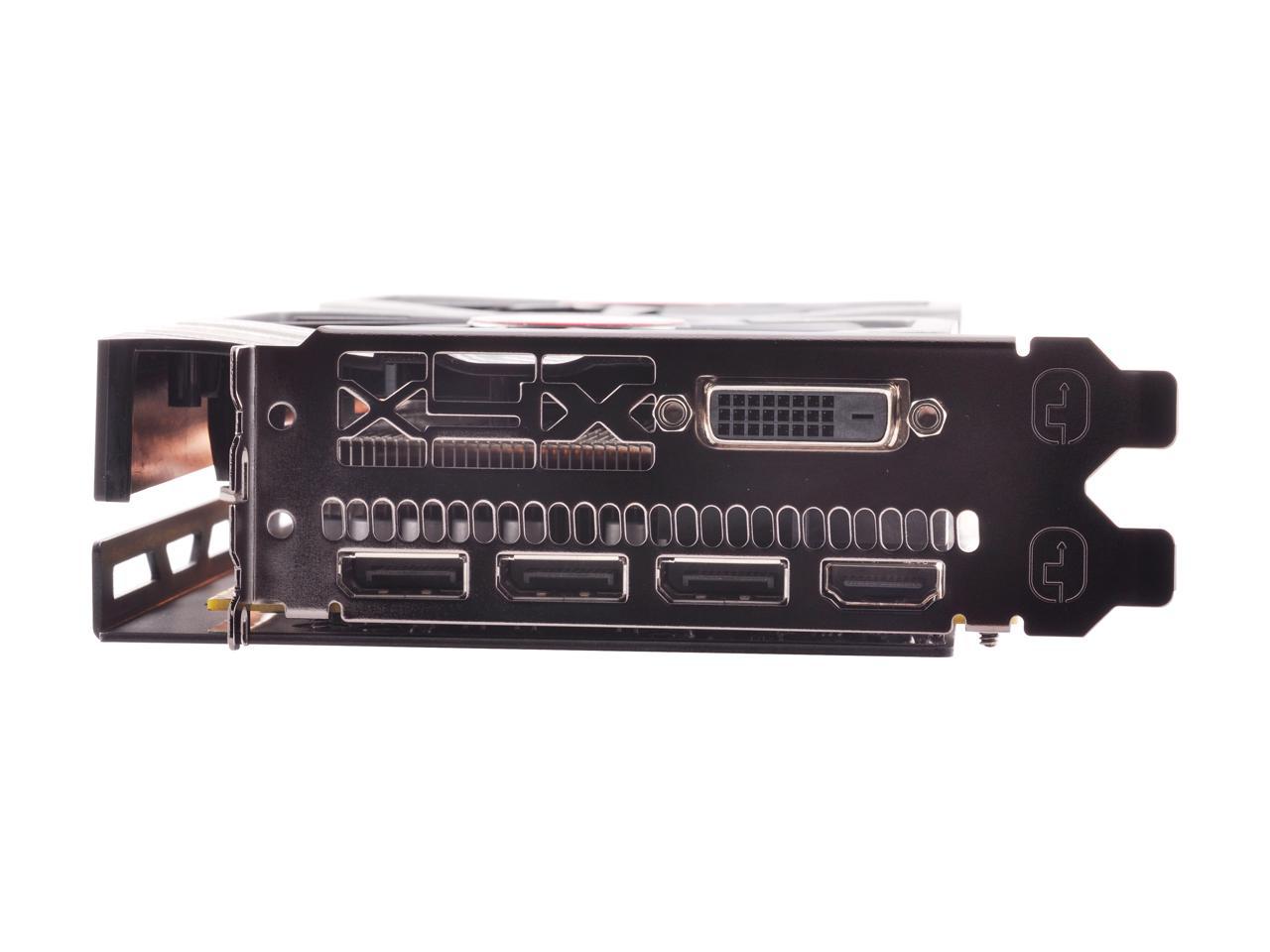 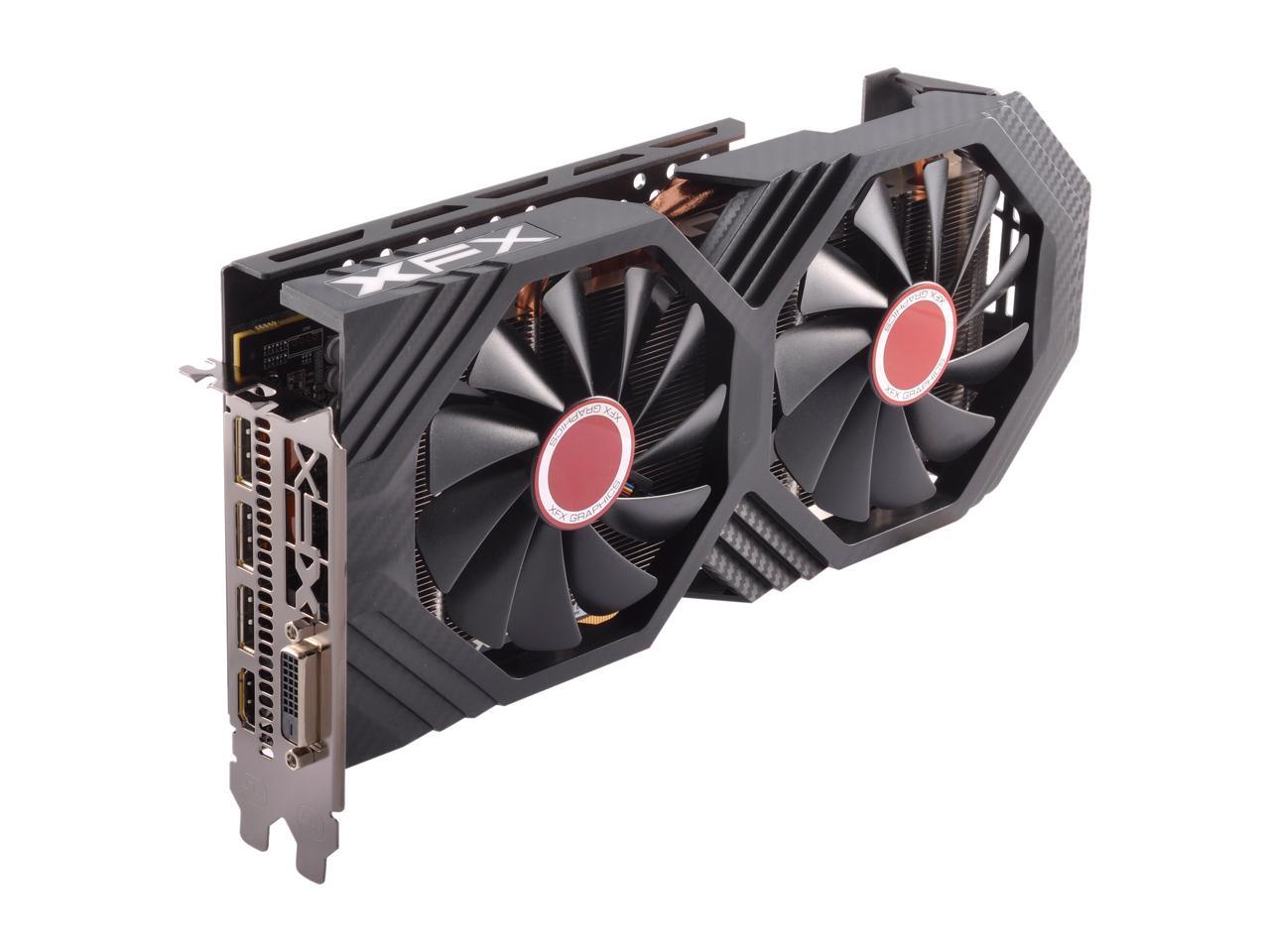 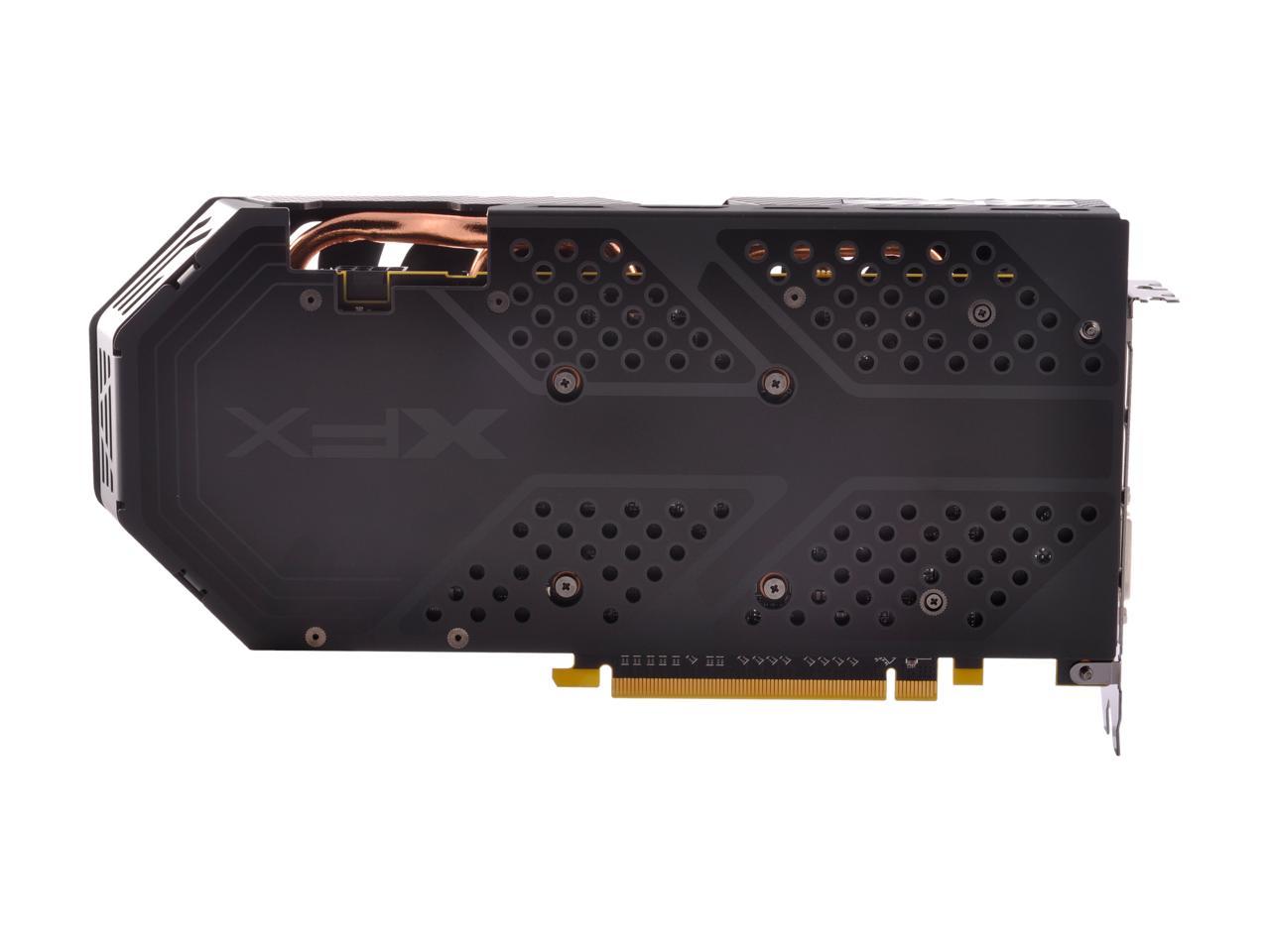 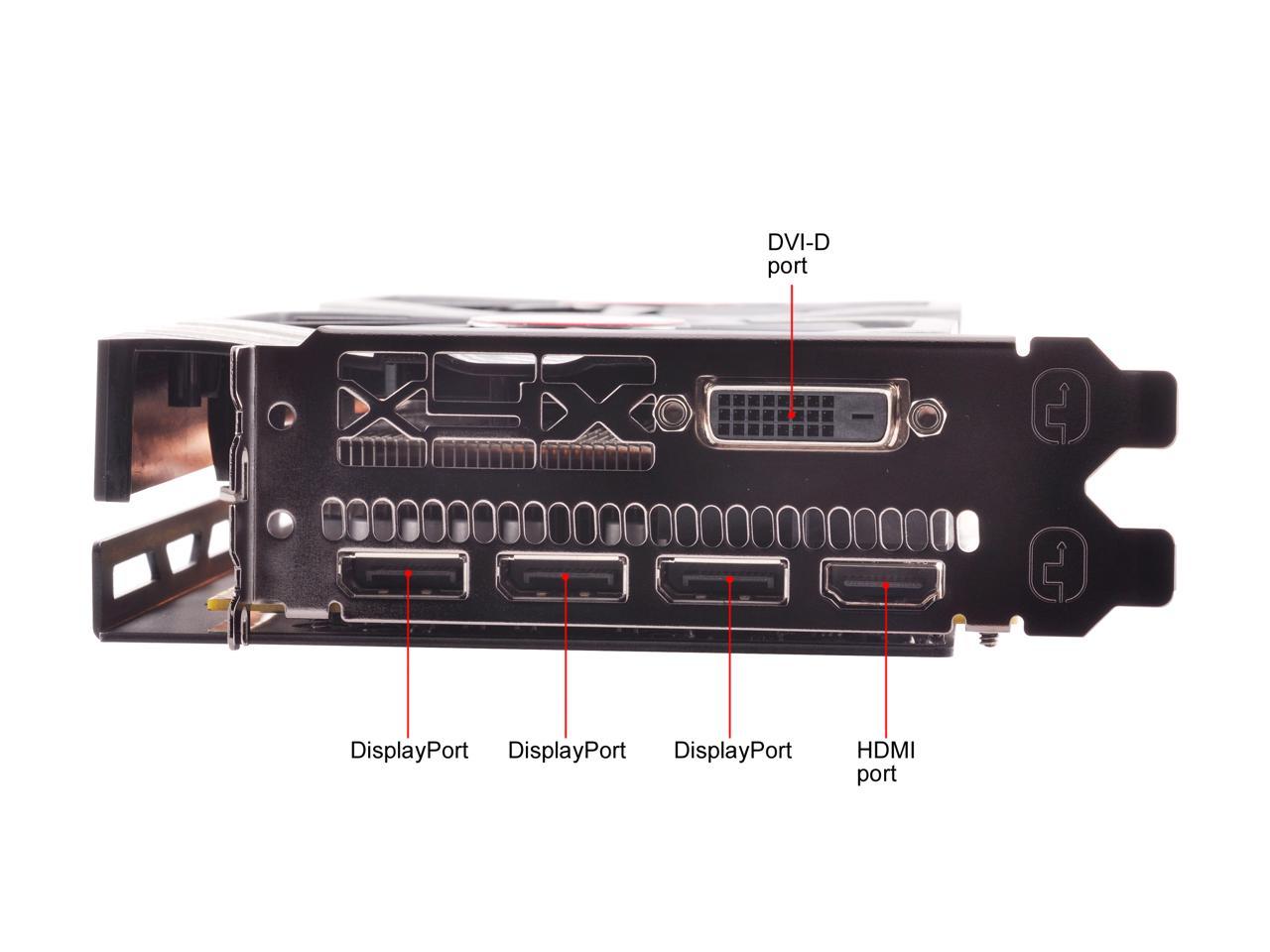 Pros: The card worked as a graphics card, until it broke.

Cons: The card broke after four (4) months! The XFX support website is a joke, and doesn't even allow uploading things like proof of purchase. You have to E-mail that to a specific person's E-mail and even then they will claim they have not received it. XFX support's definition of "prompt" is replying to each message three days later. I opened my support ticket three weeks ago and still haven't even gotten confirmation that they will RMA my card. Oh, and if you think you can just call, good luck. The phone tree explicitly says they won't process RMA requests without a ticket made on their website. But that doesn't even matter because when I called they just played an automated message saying all support people were unavailable and to call back in an hour or so. It then just hung up on me! It gets even worse. XFX has informed me that they do not cross ship replacements. Need a graphics card or your computer is useless? That's too bad, because they don't care.

Overall Review: The one page instructions that came with the card indicate that you have to overclock it to get the advertised speed. It seems like even that 1405 MHZ is not how the card comes out of the box.

Pros: Solid piece of hardware. Runs 60-80 FPS (with occasional drops) on PUBG despite being a very un-optimized game, and this while streaming. The 8 GB of VRAM comes to really good use when running GPU heavy tasks simultaneously. Great price for this performance which I'd consider mid-high range.

Cons: Temperatures go high if the case has no good air flow. Had to remove my mini ITX case cover to allow adequate air flow keeping temperatures at steady 70 degrees on full load. No GPU water block available for this back cover design. I would love to watercool this because performance just gets better at cooler temperatures on this card.

Overall Review: XFX should design a waterblock for this card.

Manufacturer Response:
Hello, Thank you for taking a moment to write this review, we truly appreciate it. If you have any issues moving forward, or any questions, please contact us xfxsupport.com. Cheers Mark at XFX Neweggsupport@xfxforce.com
ROBERT M.
Ownership: 1 month to 1 year
Verified Owner
Well Done XFX12/1/2018 10:08:27 PM

Pros: XFX has always been a solid performer for me whether AMD or NVidia. The price was decent and the card was not overloaded with all of the flashy juice sucking LED garbage. I purchased three of them total, one for an upgrade about a year ago, and two more for new system builds recently. The upgrade has been running without issue the entire time. The two new system builds have been up for a few months and there have been no issues. The cards have been run balls to the wall with mostly older games. (JO, L4D, C&C, Fallout3, Half-Life series and Star Command: Origins) WOW. All the options at the maximum and it just plows through it all without skipping a beat. Its the 8Gb memory that really levels things out. If you are and O.C. freak or a bit mining troll you may want to buy the water block for this one.

Cons: Nothing to drop and break an egg over but AMD or NVidia doesn't matter. I have owned both over the years and some others that are no longer with us. They all seem to be a little glitchy out of the box until you dial in the perfect version of driver software. Of course the perfect version is also determined by your MoBo BIOS version and the type and brand of memory you have, the CPU brand you chose as well as what you ate for breakfast while standing on your head in the sunlight on a Tuesday afternoon while chewing watermelon bubble gum. I use to have fun making it perfect and solid but these days maybe just once I would like to be able to just plug and play. I know I know but I can dream about it.

Cons: Its hot but theres fan curves for a reason

Overall Review: It was great for 2 months then i started getting crashes and screen flickers like it wasnt getting any display connection. then right after a random shutdown i turned everything off waited 20 mins and ate some food came back and plug in everything, put the cmos battery back in plugged in basically everything and as soon as i turned on my computer my grphics card made a sizzle then a loud pop and shot some sparks out the back plate there was smoke all in my case i immeditally turned it off so nothing else messed up. after that i unplugged it and put it in the box and for 4 days my room still has small moments where the smell of burnt plstic or whatver fried in my gpu and its smells like burnt plastic . Now its waiting game for a refund or a replacement. But all i know is if i didnt turn it off right away my pc wouldve caught on fire. It was a great card i had no problems with it at all untill i guess it started dying even tho i bought it brand new and only had it since 2/4/19

Pros: Fantastic card for 1080p gaming; it shrugged off every game I threw at it on Ultra settings. The card is even capable of Ultra settings at 2k though some games (eg. Rise of the Tomb Raider) will experience some stuttering at demanding parts but remain playable. All of this at the stock speeds. Overall, I am very impressed with this card. Works flawlessly on Ubuntu 17.10 and extremely well on Ubuntu 18.04 with only one exception (note cons). AMD's (open source!) drivers have come a LONG way in the past few years and I highly recommend their cards over nVidia to anyone running a modern Linux kernel. I've had no issues running Fortnite at highest settings on Windows either.

Cons: After upgrading to Ubuntu 18.04 (kernel 4.15), I began to experience occasional screen brightness flickering when the card is not under load (it may occur under load but I haven't noticed it at all). I'm fairly certain this is a driver issue and NOT the card's fault.

Pros: -Can play just about anything you throw at it with ease (as long as your drivers are fully up to date, which isn't anything difficult considering you can update through the cards software). -Not as loud as I was expecting, despite what some other reviews say. I was pretty impressed on sound levels. -Maintains great temps under pressure, highest the card got was 78 -Install wasn't too hard to get onto my motherboard. As long as you have good lighting to see what you're doing, it'll be a breeze. It IS a little bulky, making it a tad difficult, but it fits perfectly in my ATX mid-range case with plenty of breathing room. -Little to no headache making sure it was up-to-date software wise. I used the AMD site for the initial driver installation, but it also comes with a disc to use if you're unwilling to take that route. -Price isn't anywhere as high as some other cards, it fit my price range when it wasn't on sale, and more so when it was. I got it on sale for a little under $300 and it beats the $550 and up prices I see on comparable cards by other manufacturers.

Cons: None that are related to the actual card per-se, but a few minor issues I had were: -When I pulled the card out of the box, I heard a rattling sound thinking card was broken. Turns out, the tab that was supposed to be in the HDMI port slipped out and ended up in the card. When I tried to reinsert the tab, it didn't want to hold and kept on fallout out. Fortunately, it seems like just a tab issue and the plug itself is fine considering all my HDMI cables fit just fine -After installing the drivers from the AMD site, the first time I booted up Deus Ex: Mankind Divided on the card it refused to play, stating that my card wasn't powerful enough (despite the game calling for a 4GB card) and to make sure my drivers were up to date. I had to update the software to the optional 17.11.2 (as I only installed the based required drivers not knowing it wasn't going to work), it worked without a hitch after updating through the Radeon software. Again, not really anything to difficult to do. But I'm sure these are mostly user related, not so much card issue as both were resolved within moments.

Overall Review: If you can fit a 120mm fan onto the front & back of your case, you should be ok with the sizing of this card, even though the plug for power is on the side opposite the MOBO an not the back like I was expecting. I didn't OC the card, so I cannot speak for any possible issues that may or may not arise from OC, but you can adjust the OC from the Radeon software without having to use a third party program, which is pretty awesome. As long as you fully update the card as soon as you install it, optional updates and all, you should be ok to use it. I haven't had any major issues with my build since installing the card other than a few minor hiccups that comes with installing a new piece of hardware such as this.

Manufacturer Response:
Hello, Thank you for taking a moment to write this review, we truly appreciate it. If you have any issues moving forward, or any questions, please contact us xfxsupport.com. Cheers Mark at XFX Neweggsupport@xfxforce.com
JOHN B.
Ownership: 1 day to 1 week
Verified Owner
Too hot, too loud, too unreliable4/13/2019 2:07:17 PM

Pros: It runs games like a champ... before it dies.

Cons: When I first got everything installed things were going great, except I noticed the card was running hot. Very hot. Unigine Heaven pushed the poor thing up to 89C, completely unacceptable. Admittedly the case I have (H200i) isn't exactly the best for GPU airflow (it cramps it pretty close to the top of the PSU shroud), but there's solutions here: simply undervolting with the AMD driver utility. But oh wait! Turns out if you do this the card will decide to randomly fail and shut off all power to the system! Only peripherals were receiving power after this event, and the system wouldn't boot until I removed the card. There's a VERY small chance that the issue lies with the power supply since an older card boots and runs fine (though it only require the 6-pin power hookup). I ordered a nice gold-rated 850W PSU and if it changes anything I'll update this review. Until then, DON'T WASTE YOUR MONEY ON THIS GARBAGE.

Overall Review: No wonder it's on a replacement-only policy with Newegg, they'd go out of business if they had to refund all the cards that failed. It also just so happens that apparently XFX decided to overvolt the card in its VBIOS, real classy and cool XFX. Oh wait, just kidding, screw you, the stock parameters from AMD are probably perfectly fine. If the new PSU doesn't work and a card replacement doesn't work I'll be out way more money than anyone would like. Absolutely shameful.

Pros: Excellent card if you only want it for a few days.

Overall Review: My hat's off to Newegg though. some of the best customer service I've ever experienced. Helped me get resolution and a full refund. Customer for life.