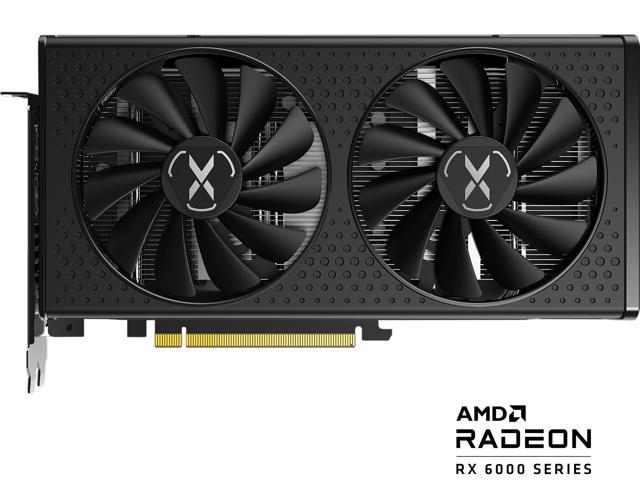 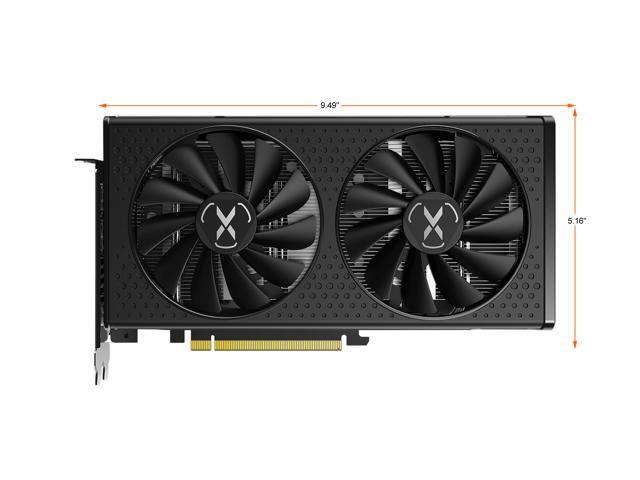 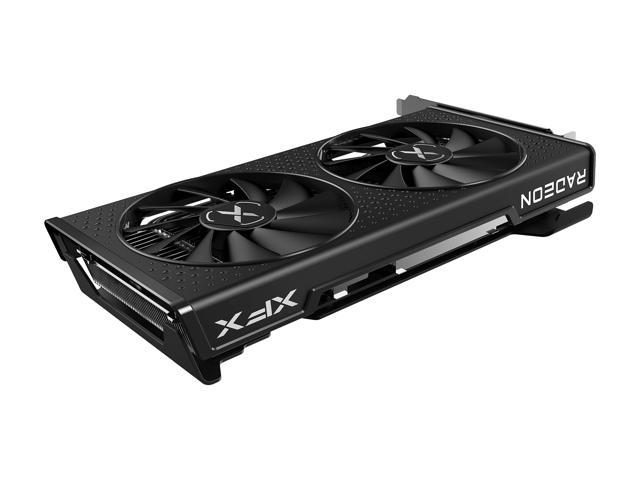 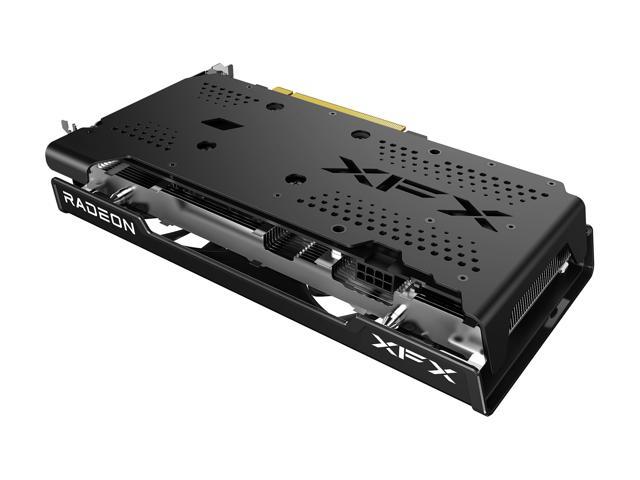 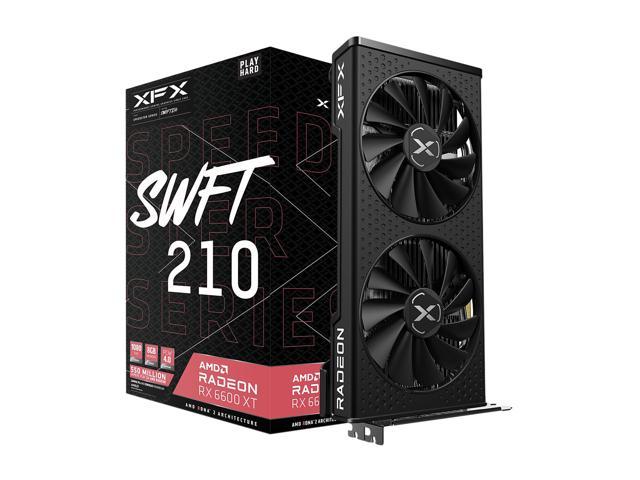 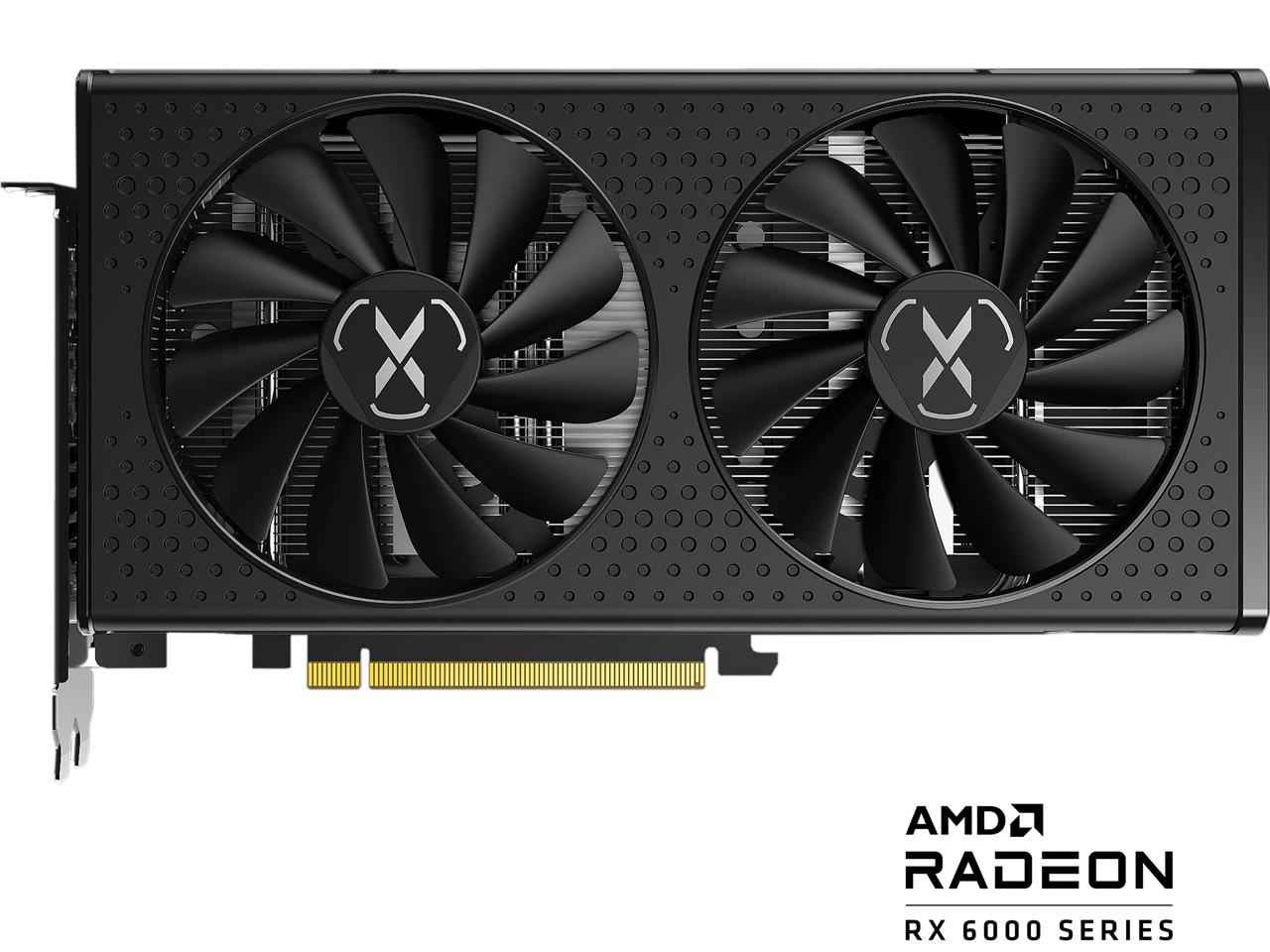 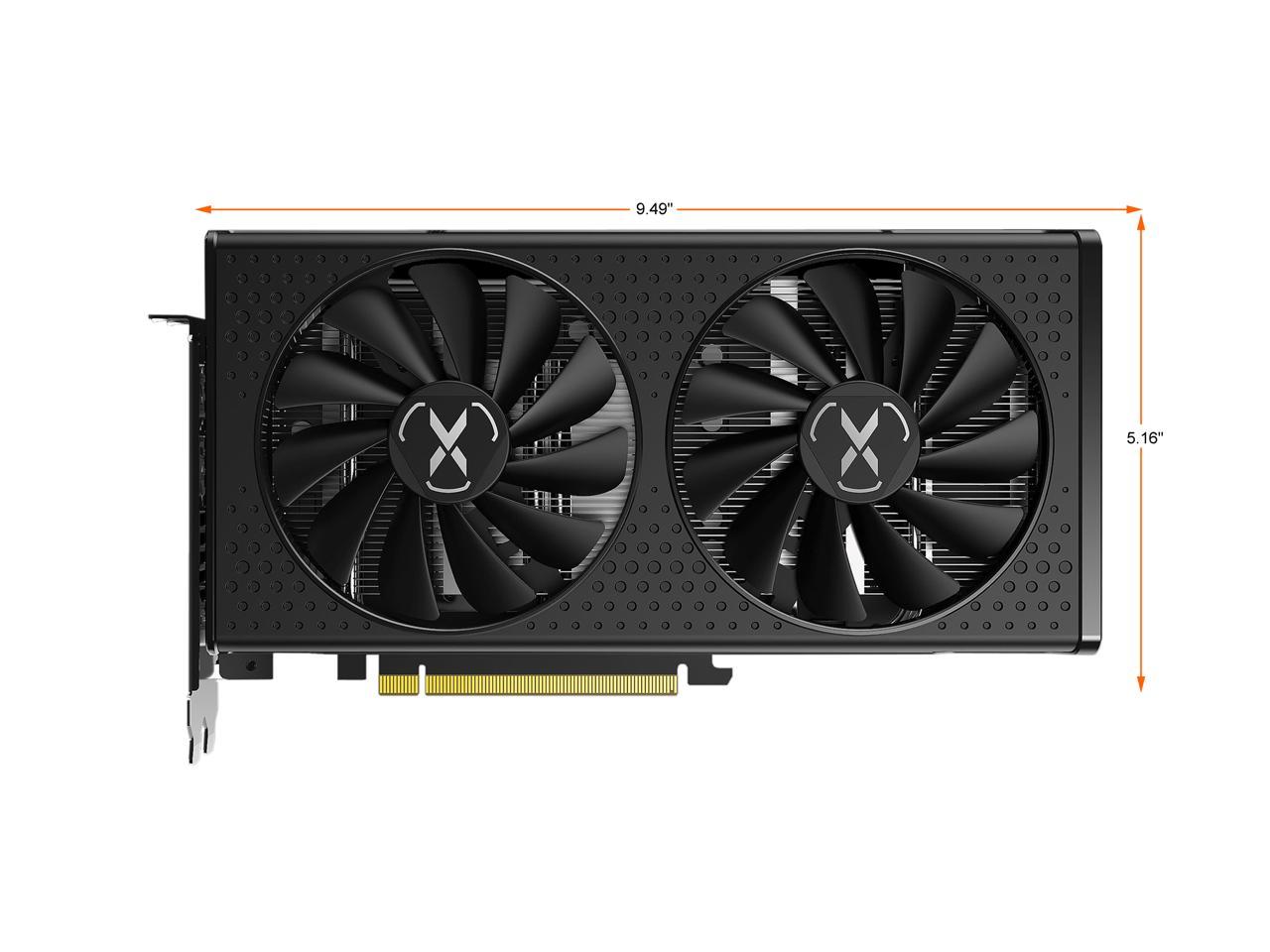 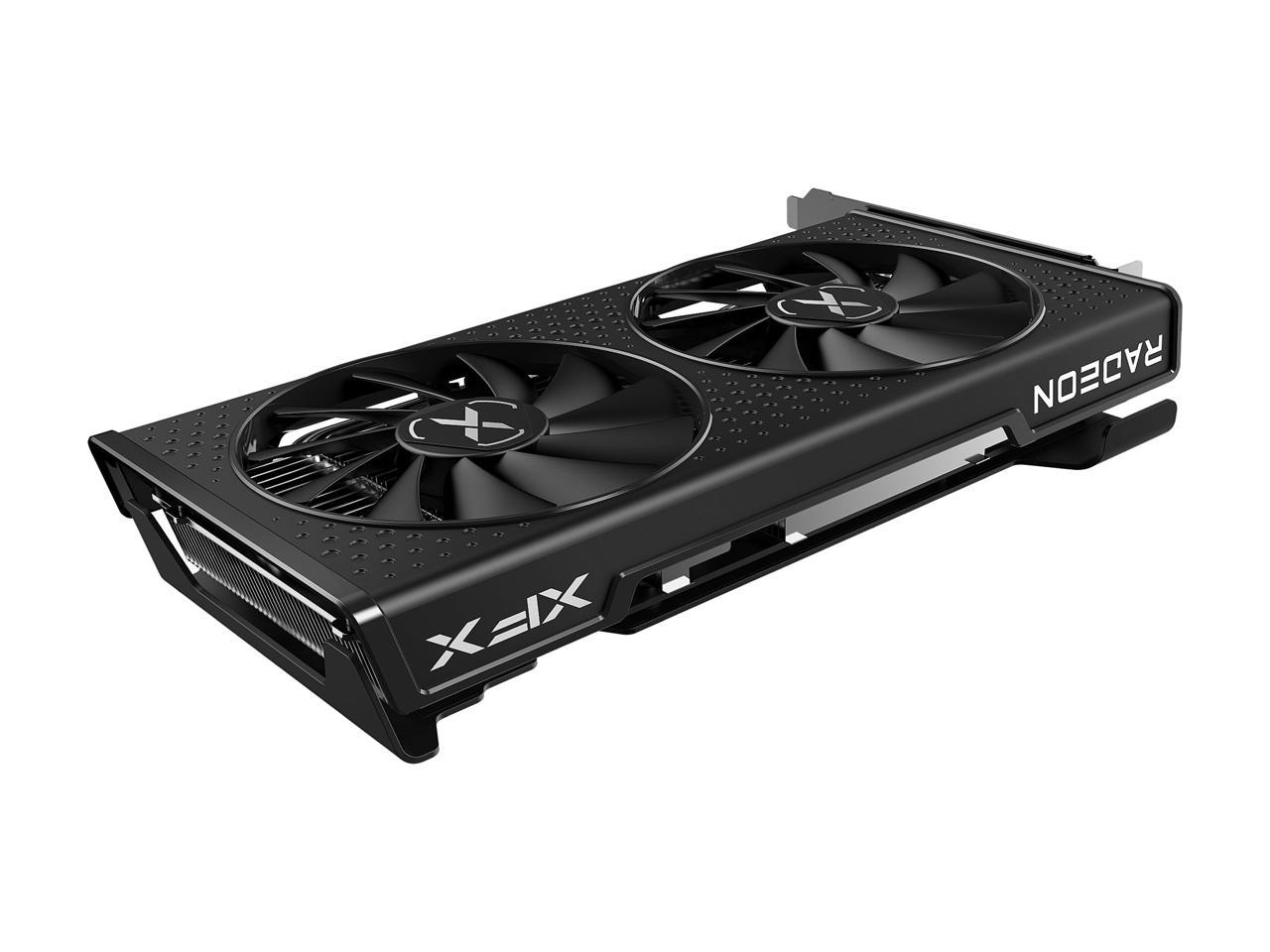 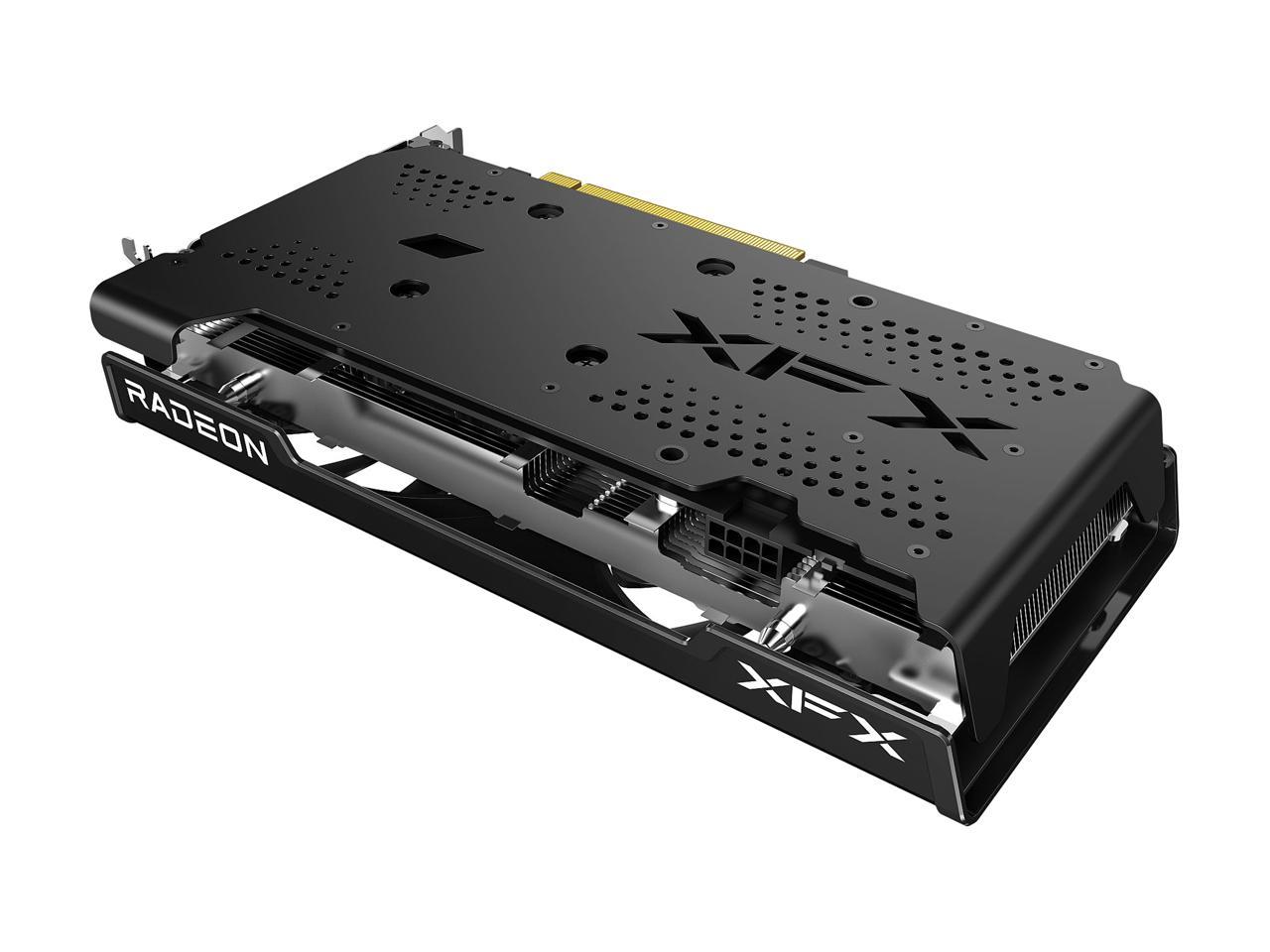 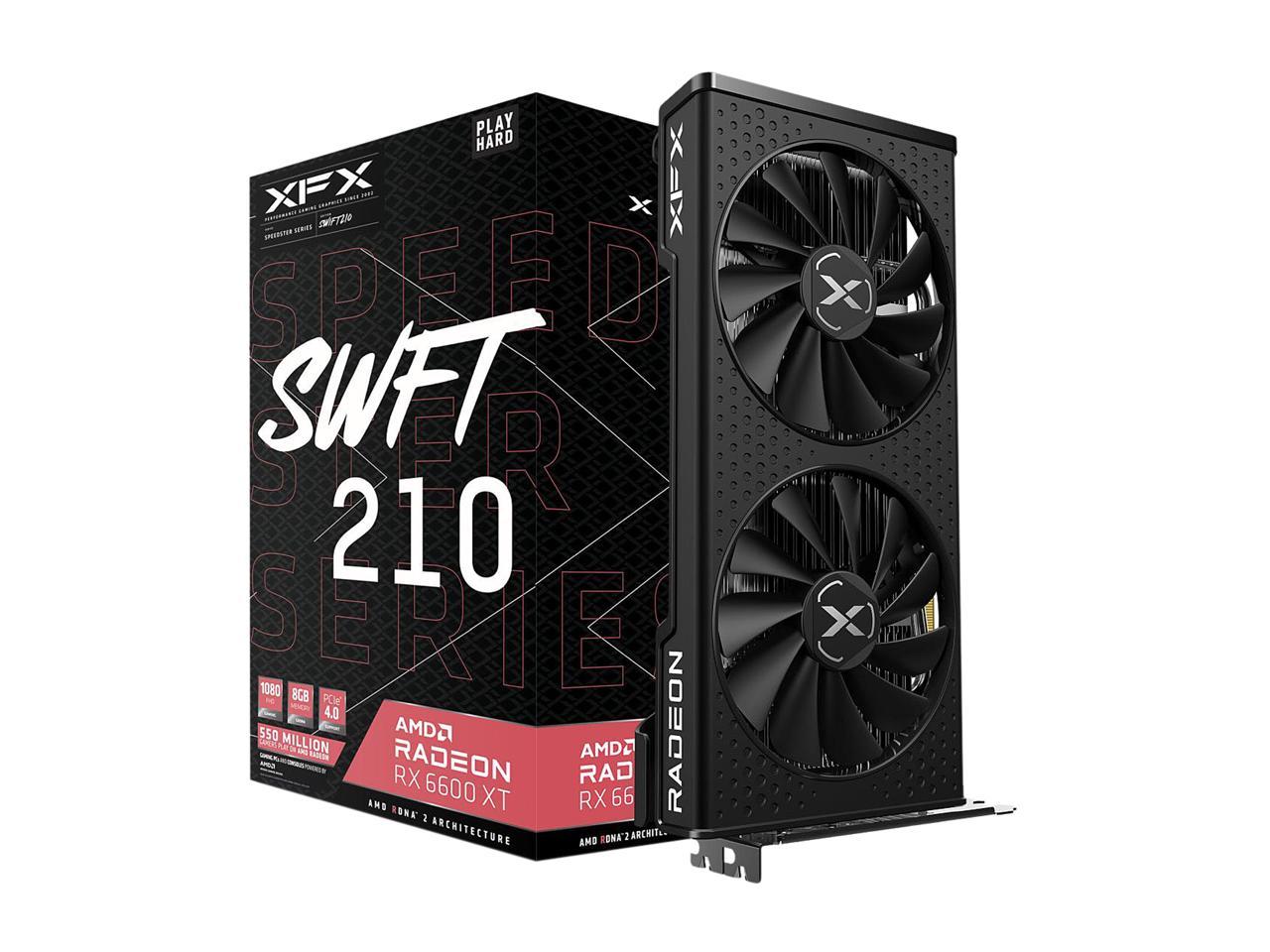 Finding the balance between a good looking card and maximizing it's performance is an art. Where we could improve airflow, we did it, we opened it up while keeping the design clean and cool.

The XFX RX 6600 XT is built for high-performance high definition gameplay. Experience smooth gameplay performance at 1080p. With support for 8k you are ready for Next-Gen displays. See everything in mind-blowing detail without sacrificing performance.

Learn more about the XFX RX-66XT8DFDQ

Pros: Just picked up this card from NewEgg and it rocks. Its better than the 3060 and almost as good as the 3060 ti. The size is great, actually these two fans cover more surface area than the 3 in the 3 fan model, I'm sayin. Love the small size and its working great at fast!

Overall Review: I recommend this card without reservation. Its powerful, power efficient, small size, couldn't ask for me, except if it were a 6700 xt.

Cons: Less solid performance at 1440p and above Mythical MSRP that will never be seen again after launch Performance reduction on PCIe 3.0 or older Ray Tracing cripples this card

Overall Review: Five eggs for XFX as this card has worked fine (mostly) without issue for months. There were some initial errors, but this seems to have been cleared with updated drivers. For this specific model, XFX has done a great job creating a product that runs cool and quiet. That may seem like faint praise, but the MSI 570 Armor 8GB this card replaced constantly ran hot (almost to the point of shutting down) and loud (3000+ rpm) despite a lower TDP. Any attempt to undervolt resulted in crashes and lowering the fan speed caused overheating. Another review mentions the two fans here have a greater surface area than the triple fan set up. This is true for the QICK, but not the MERC, while both have a better heatsink. That is fine as this card was built to sell at AMDs initial MSRP. Consequently, it probably will not overclock as well (or at all), so look to the other variants if that is your preference (not that it matters as of this review, GPU prices are insane). Suffice it to say, the card is built well enough for the spec. For a review on AMD, it may not be the hot garbage that is the 6500XT, but this card is bad value. This is supposed to be a mainstream offering but a ~$400 1080p card is absurd. I managed to get one from the Truffle Shuffle at MSRP, but these shenanigans need to stop. At the very least, these companies need to stop lying and just say theyre outright gouging consumers. Of course, theres also the PCIe 4.0 issue and lack of memory bandwidth. HUB and GN have good analyses of this issue. Generally, PCIe 3.0 is fine with some game exceptions (e.g., Doom Eternal), but this will likely be an issue in the future. Oh well...not like there were better alternatives available at MSRP.

Overall Review: I am very happy with the purchase. I works for the games I play and haven't had any issues. This is my first XFX card and it won't be my last.

Pros: - It was most definitely a massive upgrade from my previous RX480 8GB -Was one of the few GPUs actually worth its price IMO due to the current situation. -Every game I played with it ran fairly well on whichever graphics I choose. Though the triple-A titles definitely had to tweak the settings, primarily going from medium to high for a crisp 144fps etc.

Cons: -Well, it worked incredibly well for the first month and a half that I've had it. Though recently I've been running into an incredible amount of problems - Primarily, the GPU tends to freeze up both of my screens, regardless of load. I've tested the ram and all of my other hardware and everything works fine without the GPU. -Others have been having similar issues I have had with this same product along with the model itself. The screen will freeze up, regardless of the stress its put under. Hell, it even freezes up after it wakes up from sleep mode. -While it could be a driver issue with both Radeon and Windows, it's just not worth the headache.

Overall Review: -I would've recommended it had I not had the issues I had with it. -A solid GPU, just hope the issue I have is either resolved with XFX itself or the drivers.

Pros: This card immediately optimized for my 4K tv. Anyone who has tried to run a PC game on a large tv knows that it takes a LOT of tweaking and tuning (moving ambient occlusion to low etc) to make it work well. NOT WITH THIS CARD. I plugged it in, ran the updater, and my tv immediately started talking to it. It automatically upscaled from 1080 to 1440. It handled the tv vertical sync flawlessly. And of course... It's quiet! The quietest card I've ever used and doesn't get too hot.

Cons: Would love a 12gb version just to really see what it could do. It has had a few sound drops during loading screens - only loading screens but it has still been a concern.

Overall Review: Easy choice to recommend this card if you're looking for a good option. It's not a 6900XT and it doesn't need to be!

Pros: Shipping was very fast! I was pleased ! Installed without a hitch and so far I haven't had any problems.

Overall Review: Is a excellent gpu for gaming at 1080p.