OUT OF STOCK
Sold by: Newegg
Shipped by Newegg
This item is currently out of stock and it may or may not be restocked.
Out of Stock
Add To ListFound on 105 wish lists 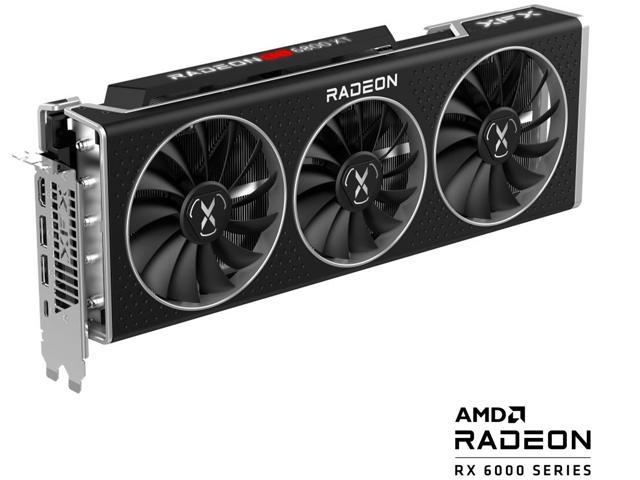 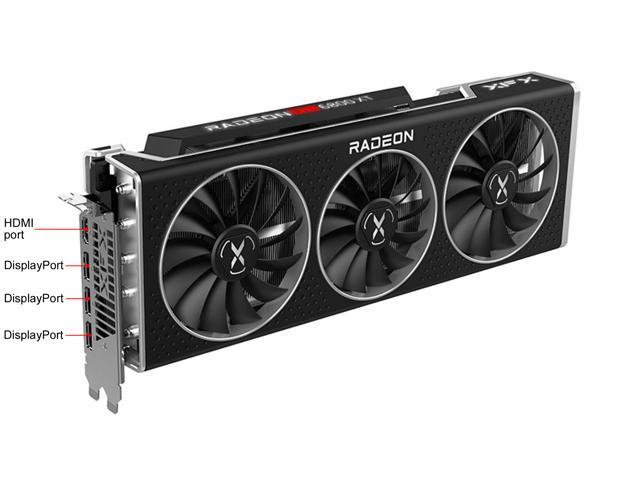 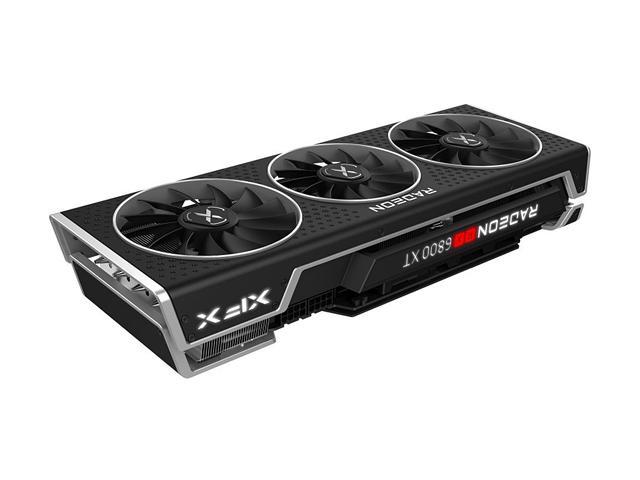 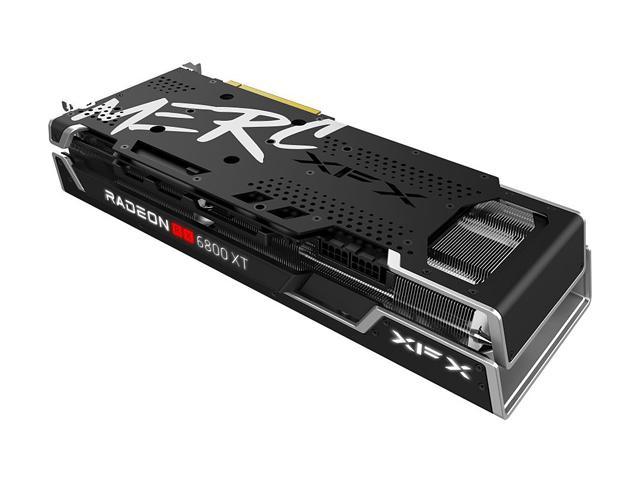 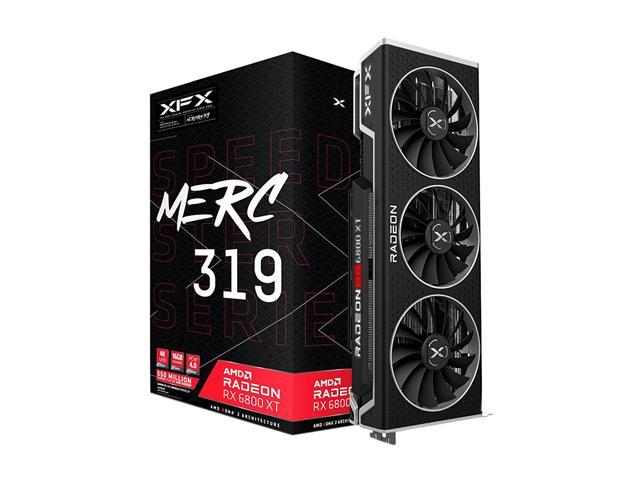 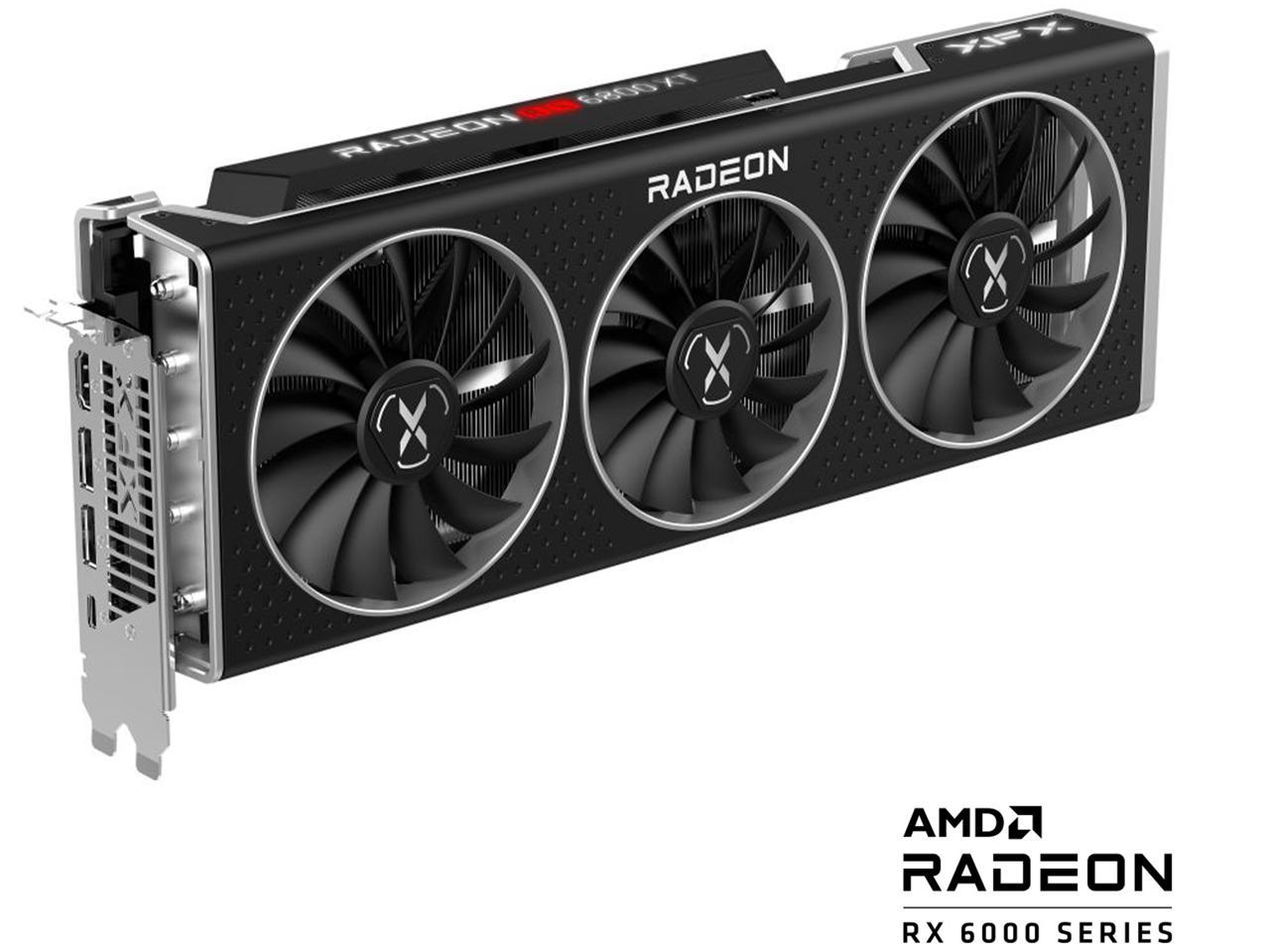 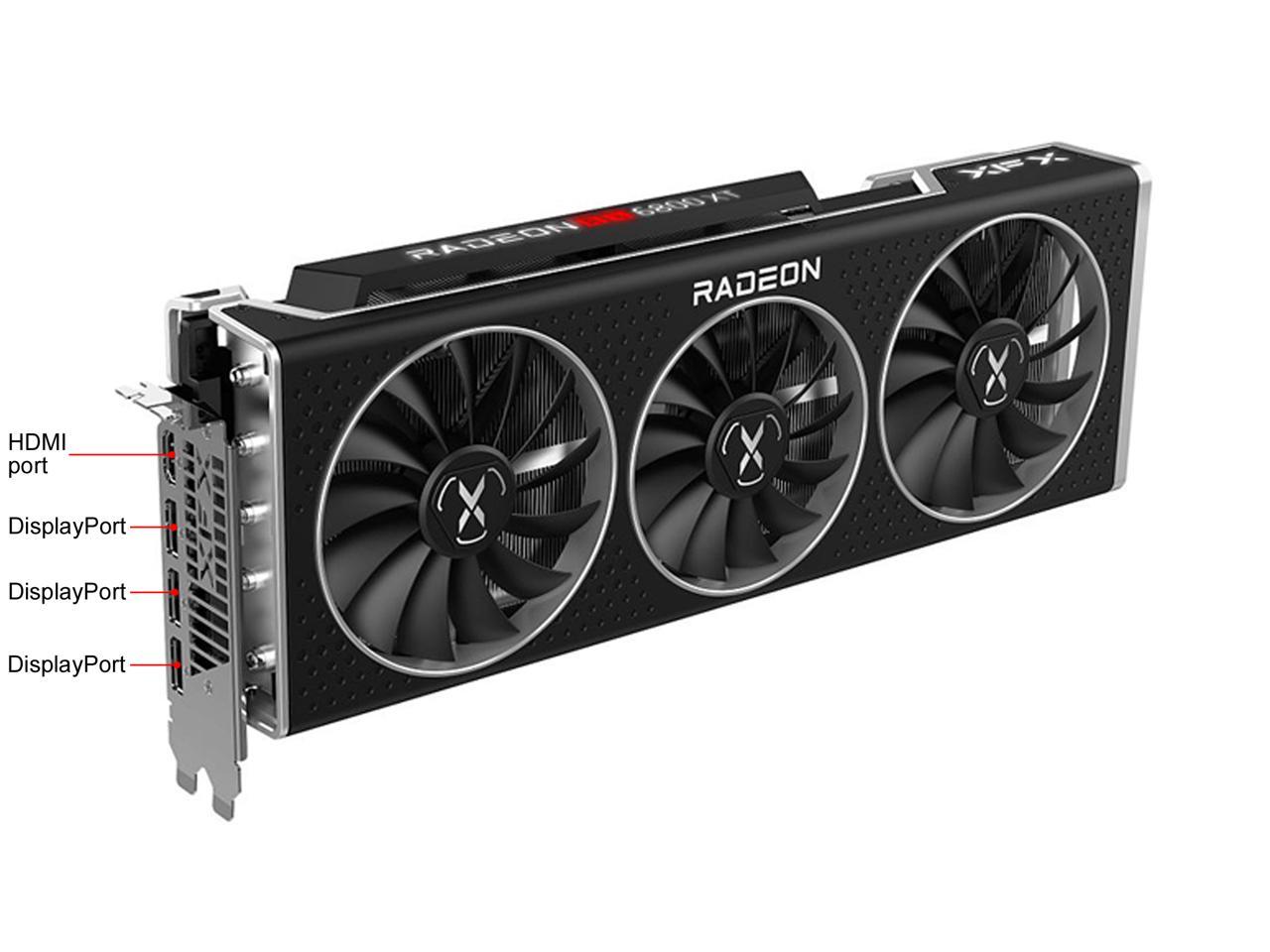 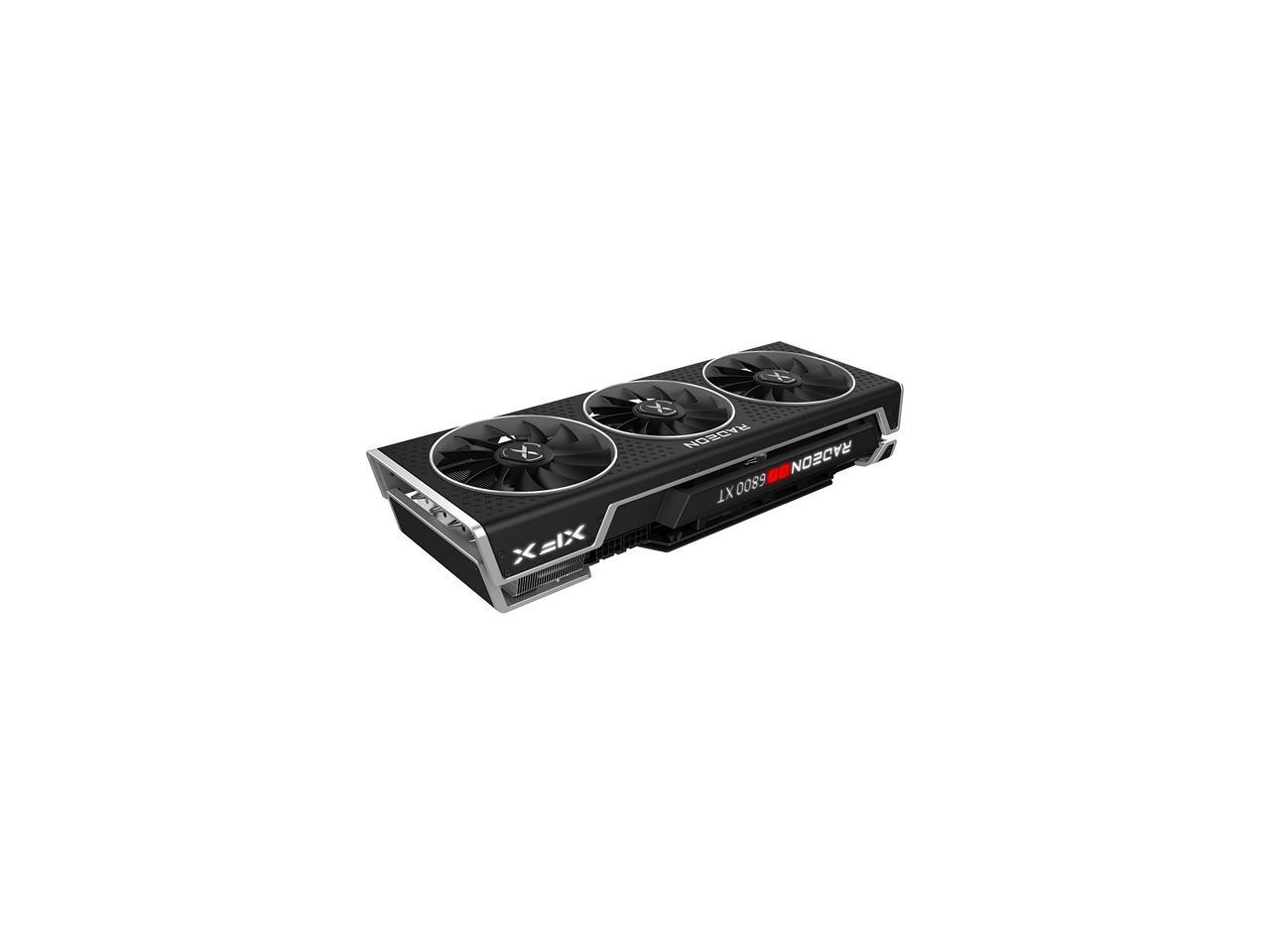 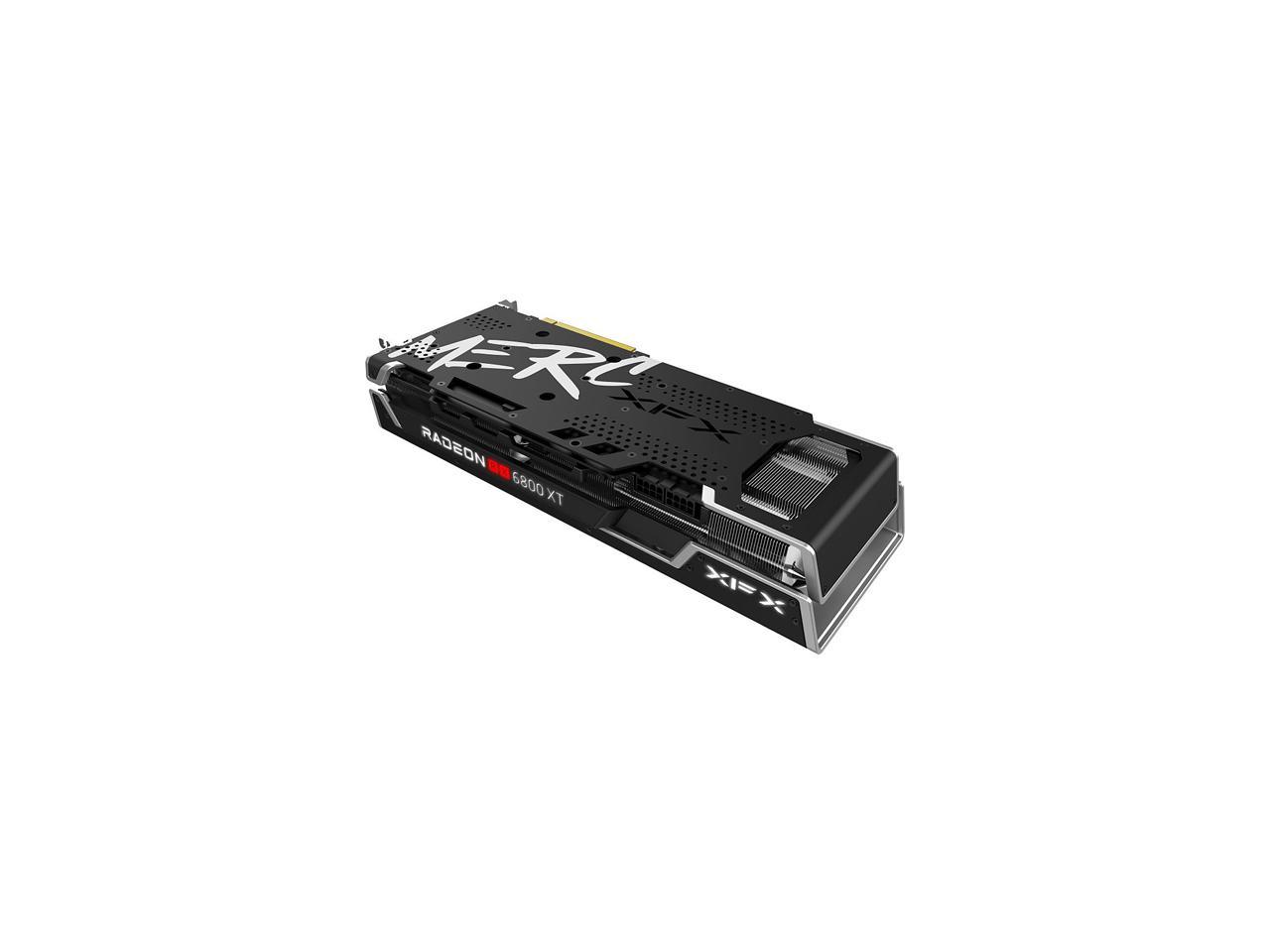 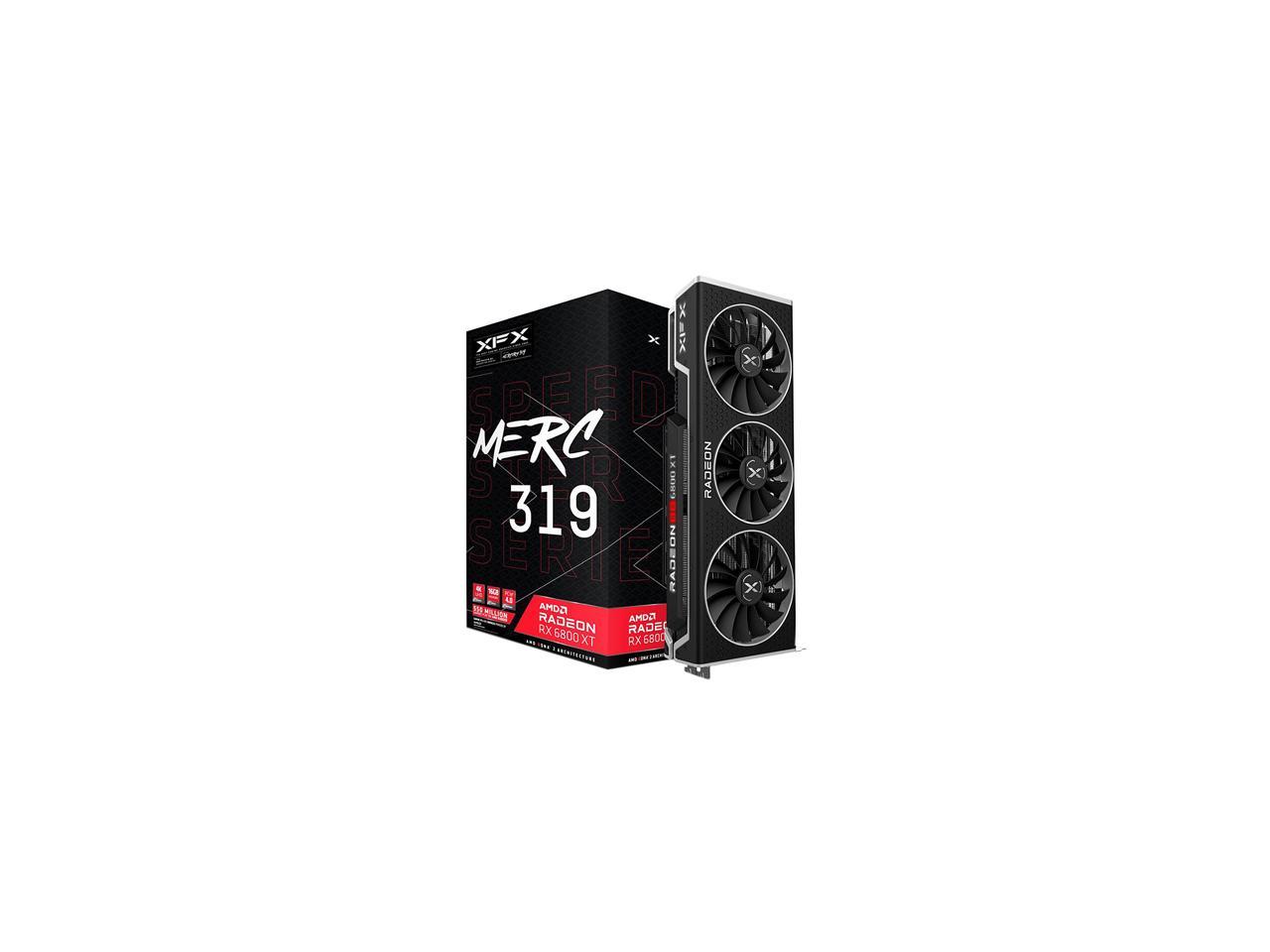 Learn more about the XFX RX-68XTACBD9

Pros: - Runs cool, best air cooled 6800xt - Mine can stay at 2600ish mhz when I crank the fans up from the default, which I think tops out at 35%, not too noisy at 60%, loud at 100% - beautiful card - It doesn't sag because it has a reinforced aluminum plate though it's length, which is supported with the screws on the back side of your case Updated review: - I think I won the silicon lottery. After hours and hours of testing I can safely say my card can stay at 2750mhz on the core and 2120mhz on the memory with "fast timings" perpetually without going over the temperature going over the low 80s on the hot spot. I set up the fans to max out at 80% which to be honest is quite quiet compared to other cards i've had before, it's for sure audible but I can't notice it with my headset on or if there's some other noise source. All I had to do is crank the overclock sliders to the max for the core and max out the power limit. Stable after hours of gaming and a 5 hours unigine superposition stress test. - This card is so powerful and properly cooled that the fan will stay at zero rpm when playing games like league of legends at 1440p with maxed settings while giving 240+ fps and the core frequency stays between 300-500mhz. If I uncap the FPS limit it gives me around 550+ with my setup, but that's more than my monitor can handle so I don't use that.

Cons: - It's freaking huge, make sure you have 34cm to spare inside your case - I think it's too expensive for what it is, even though it's still a beast card - 2 of my monitors stopped being detected at all by windows after I accidentally pressed the "quick setup" button for eyefinity. Resetting the drivers to "factory settings", restarting or plugging out and in the monitors didn't help, had to reinstall the drivers Updated review: - The drivers have an issue with setting a custom fan curve. While I can set it and it for the most part works, the fans won't spin up to the exact speed I set them to and when they spin up or down they don't do it at my configured temperature, but somewhere close. I'm not sure if this is intentional or not by AMD, or if it's some driver issue which will be fixed later. I certainly would prefer to have absolute control over the fan.

Overall Review: - If you aren't on a budget but still don't want to splurge too much then i think this is a good card. It should be good for 1440p for at least 2-3 years max settings - AMD will have their version of DLSS and ray tracing in 2021 hopefully, since consoles also use RDNA2, I'm expecting to see most games support this on AMD cards. THat will make this card more future proof than a 3070 or 3080 since it has a lot more VRAM

Pros: this thing stays cool, looks cool, and is cool. stays super cool when i was OCing and was able to get crazy numbers on timespy and timespy extreme.

Cons: got when it was still at 799. price now is just way too insane for anything really. and the size of this thing is huuuge 340mm it barely fits my lian li mesh ii

Overall Review: i would 100% recommend if prices go back down

Pros: Was always an Nvidia/Intel user, but decided to go team Red and paired this card up with an AMD 5950x. Benchmarks are solid and is a great competitor to the RTX3080. Have not pushed any overclocking, but the heatsink on this monster should handle anything thrown at it.

Cons: This beast weighs at least a good 4 pounds. There is some slight sag, but not too noticeable. At 340mm long, you need to make sure you have a big enough case to hold it. I have about 20mm clearance in my Corsair 4000d case. It must be the longest card on the market. Also, noticed that the logo on the side sometimes blinks off then back on again. I think it does this when the monitor times out. Not sure if this is some feature since there really is little documentation on this card.

Overall Review: Great card if you need this much power. Price is steep, but you get what you pay for.

Cons: Card is huge I have a full tower case and had to move the reservoir for my water cooling forward a inch and a half so that it's touching the front intake fan and the GPU still rubs against it. Fans get fairly audible after extended play time Ray tracing cuts frame rate in half

Overall Review: Overall this is a great card and was a massive upgrade from my 1080. Ray tracing cuts the frame rates in half. In Control at maximum settings running 3440x1440 ray tracing on around 80-90 FPS, ray-tracing at medium around 45 FPS, ray-tracing at high 38+ fps hoping things get better with newer games coming out optimized more for AMDs solution

Pros: I have owned NVIDIA and AMD cards in the past. I have never seen such an over built cooler. I'm not exaggerating when I say, if you set the fan curve to max out at 70% fan speed. This card will never go above 55c while gaming. Therefore you could also do a lower fan curve that's almost silent and top out AT 65 to 70c. This card have a metal brace that goes around the entire perimeter of the PCB. Because this Graphics Card is so massive they did this to garuntee that the card will never warp/sag. Dual Bios is nice. I use the high performance bios and run a healthy overclock. The VRM can handle heaviest of overclocks.

Overall Review: Amazing card. Best cooler I have ever seen, overclocks very well, and looks very cool inside of your PC.

Cons: -Hard to get due to shortage -Costs more than pre-tariff

Overall Review: -If you can and are willing to spend for it, go ahead.

Pros: This thing is a beast. I only game at 1080p, but the amount of performance increase I got over my 1080ti is insane. I'm a high refresh rate type of dude. I use a BenQ XL 2546K @ 240hz and my gosh does this thing pump out the frames. My card auto OCd to right under 2600 Mhz and I'm sure I could pump out some more juice from it.

Cons: The only con is the price jump. Sucks I wasn't able to get this card before the MSRP increase, but I still think it was worth.