Purchases from these Sellers are generally covered under our Newegg Marketplace Guarantee.
295 Ratings (77% Positive)
Sold and shipped by: PC Power MarketplaceContact Seller
Ships from Hong Kong.
295 Ratings (77% Positive)
On-Time
Delivery
81.69%
Product
Accuracy
82.71%
Customer Service
Satisfactory
69.43%
View All Seller's Reviews
This item is currently out of stock and it may or may not be restocked.
Out of Stock
Add To Wish List 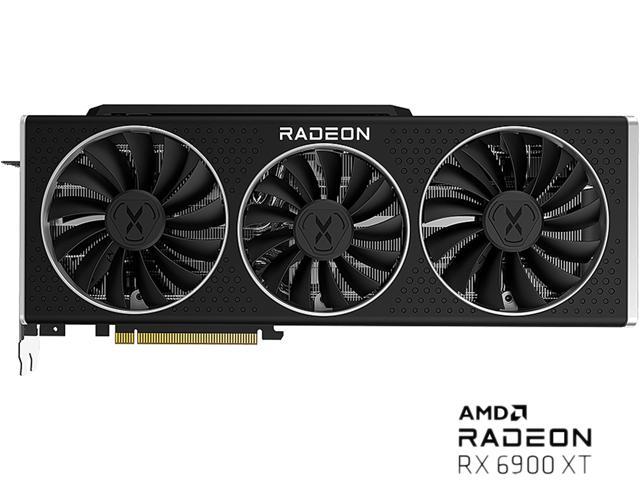 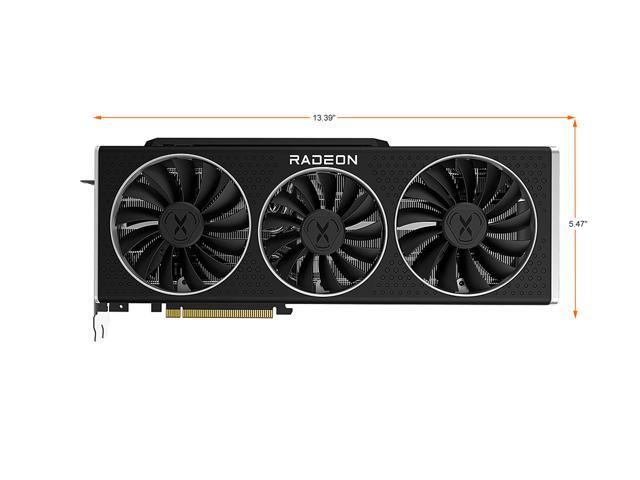 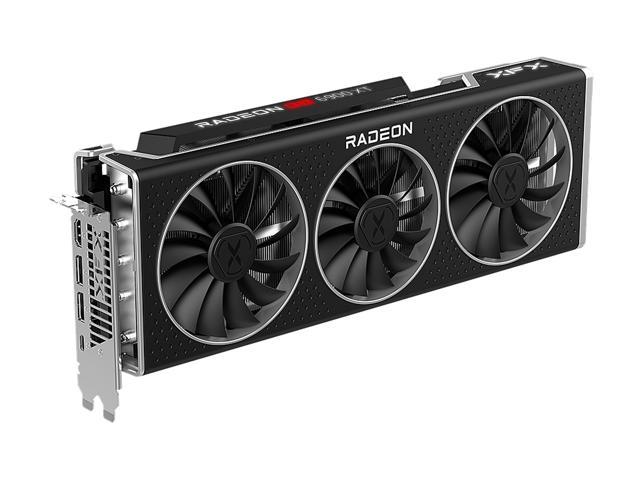 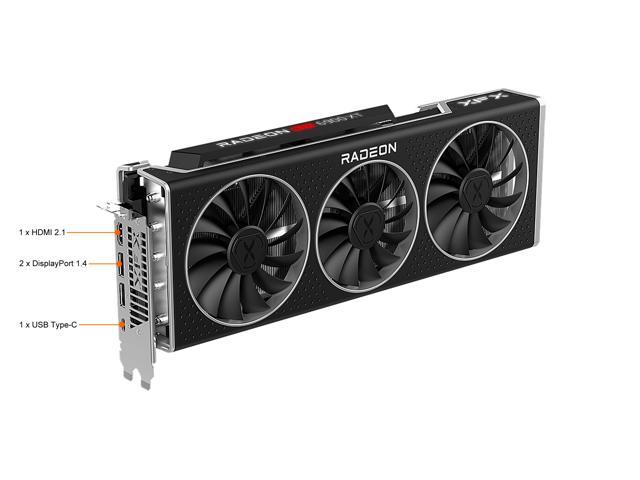 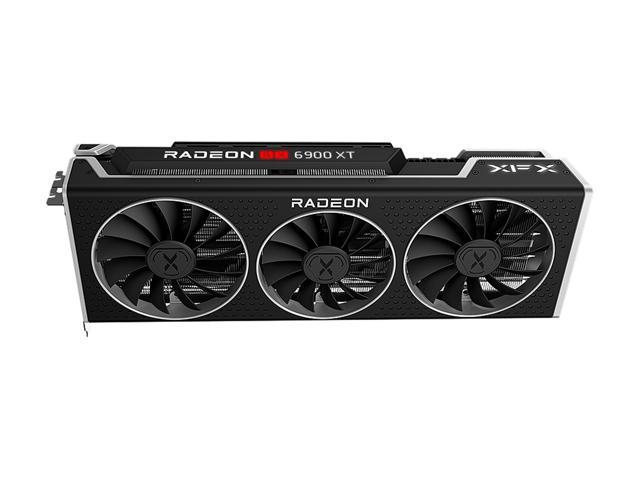 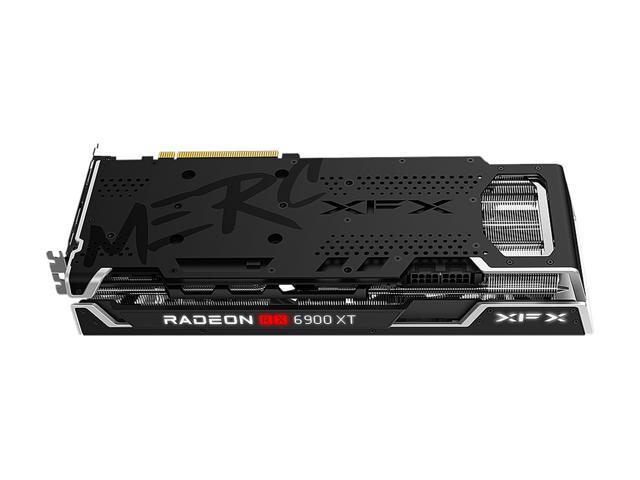 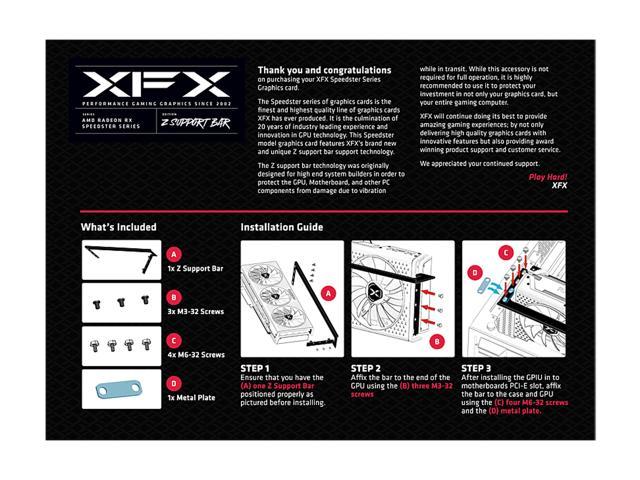 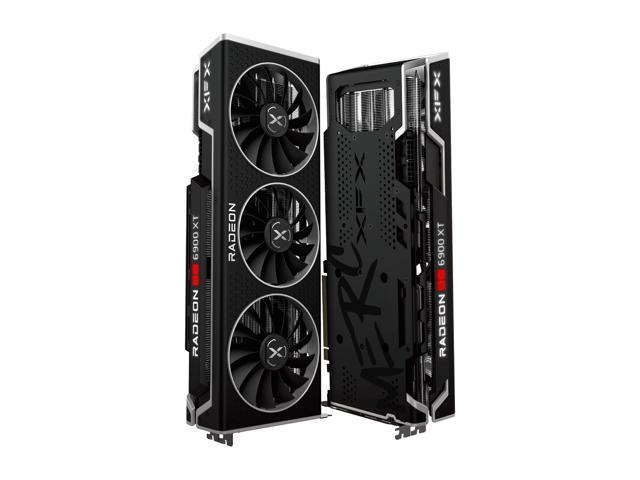 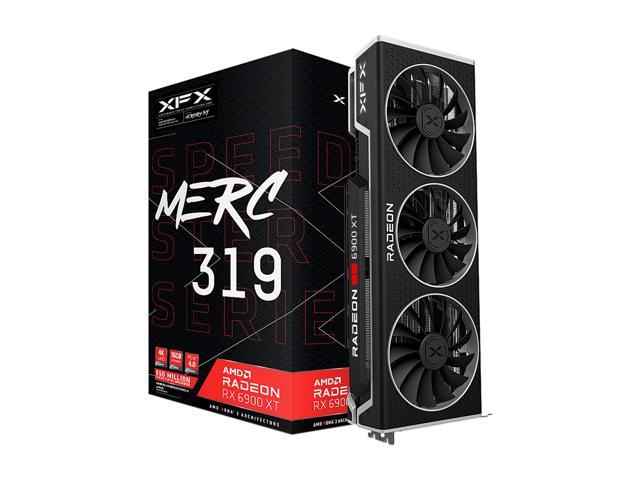 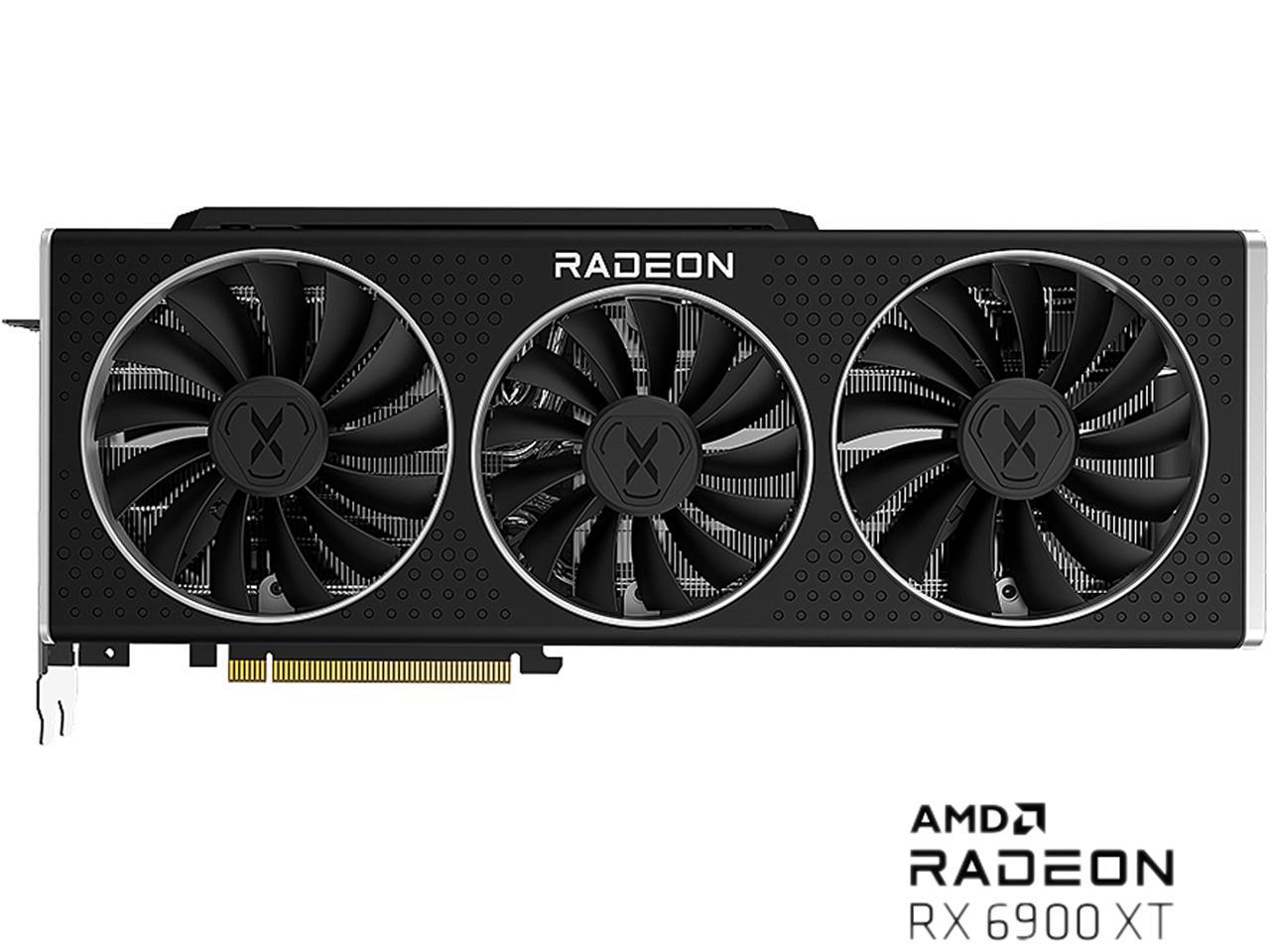 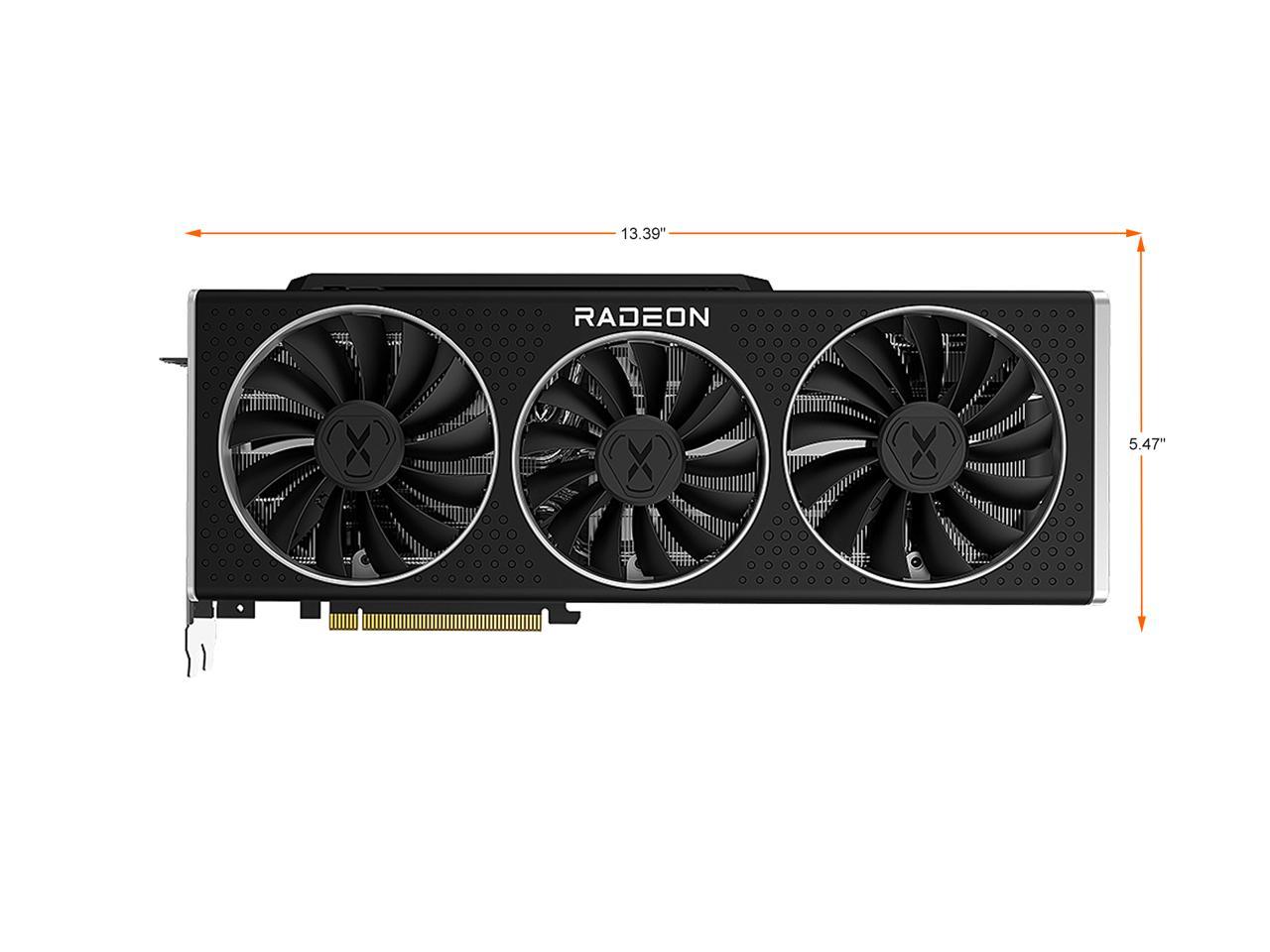 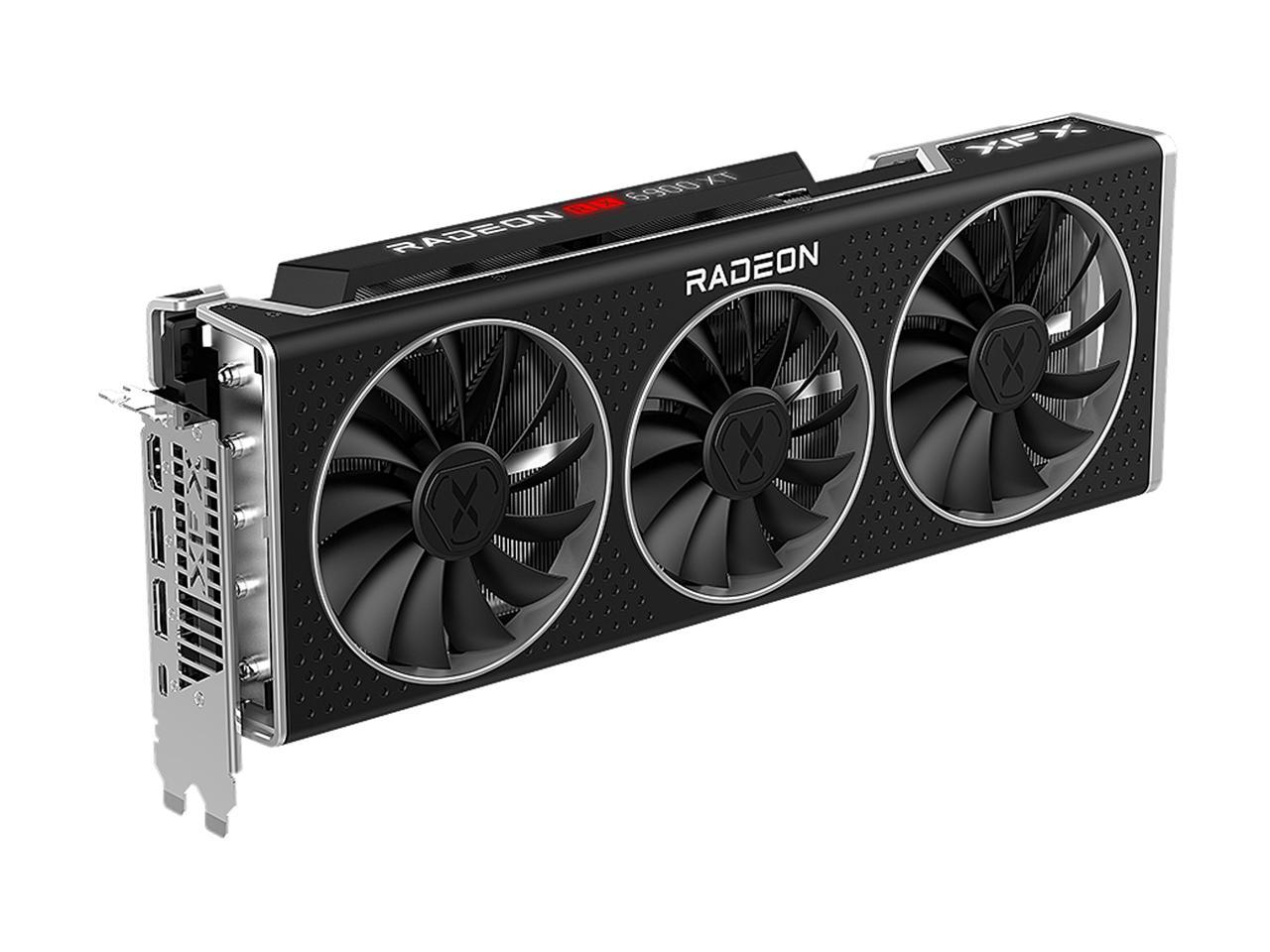 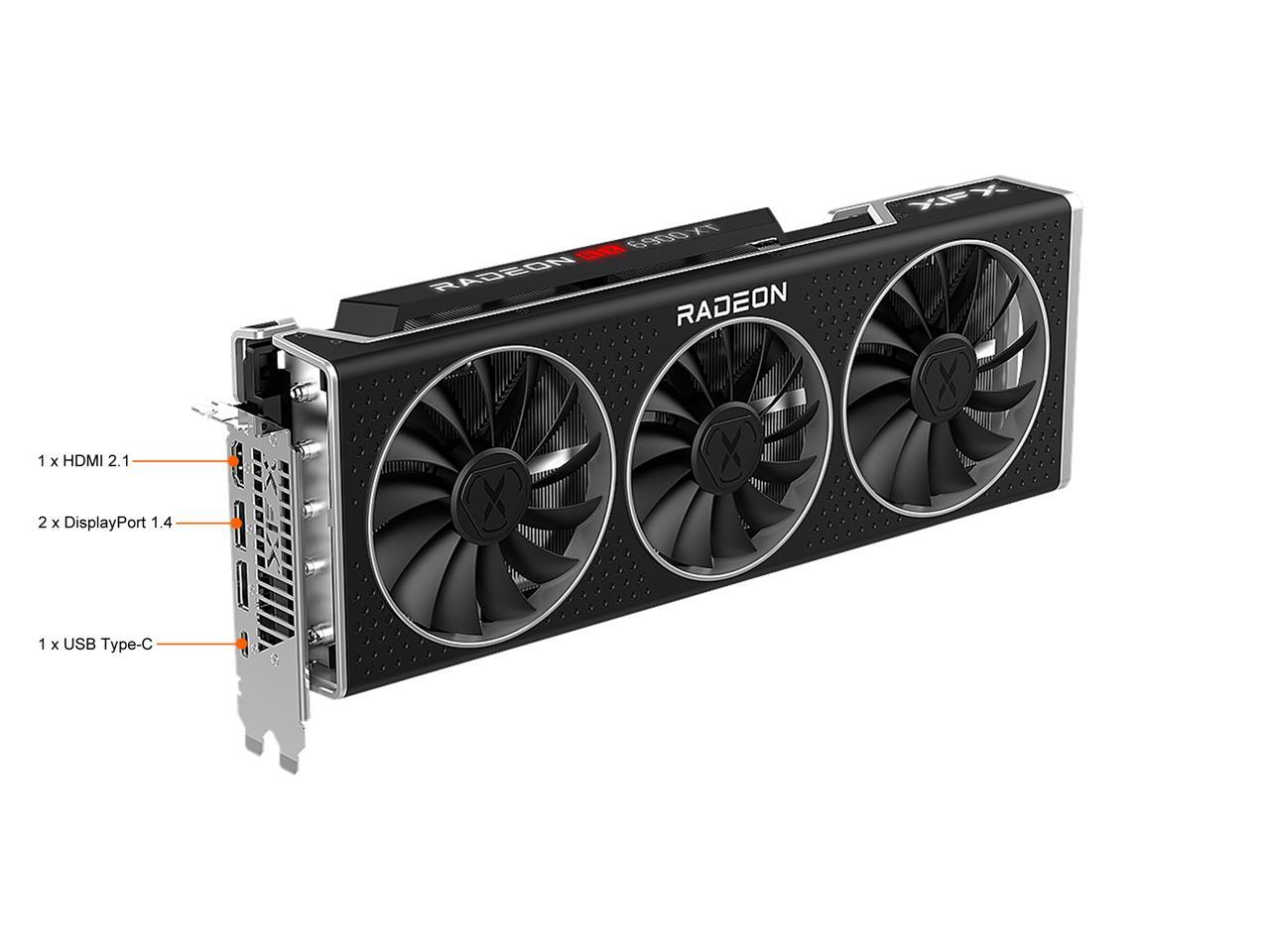 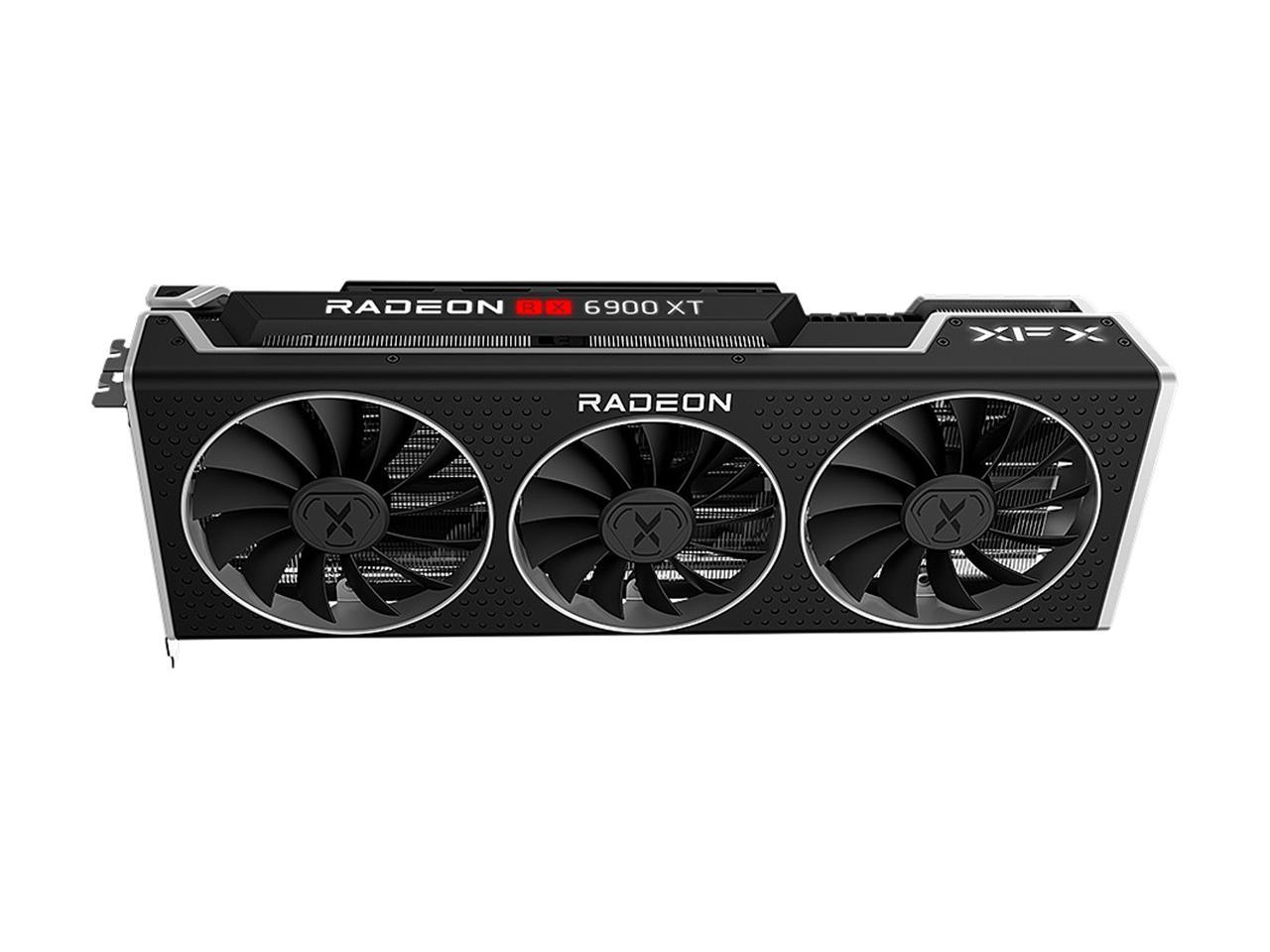 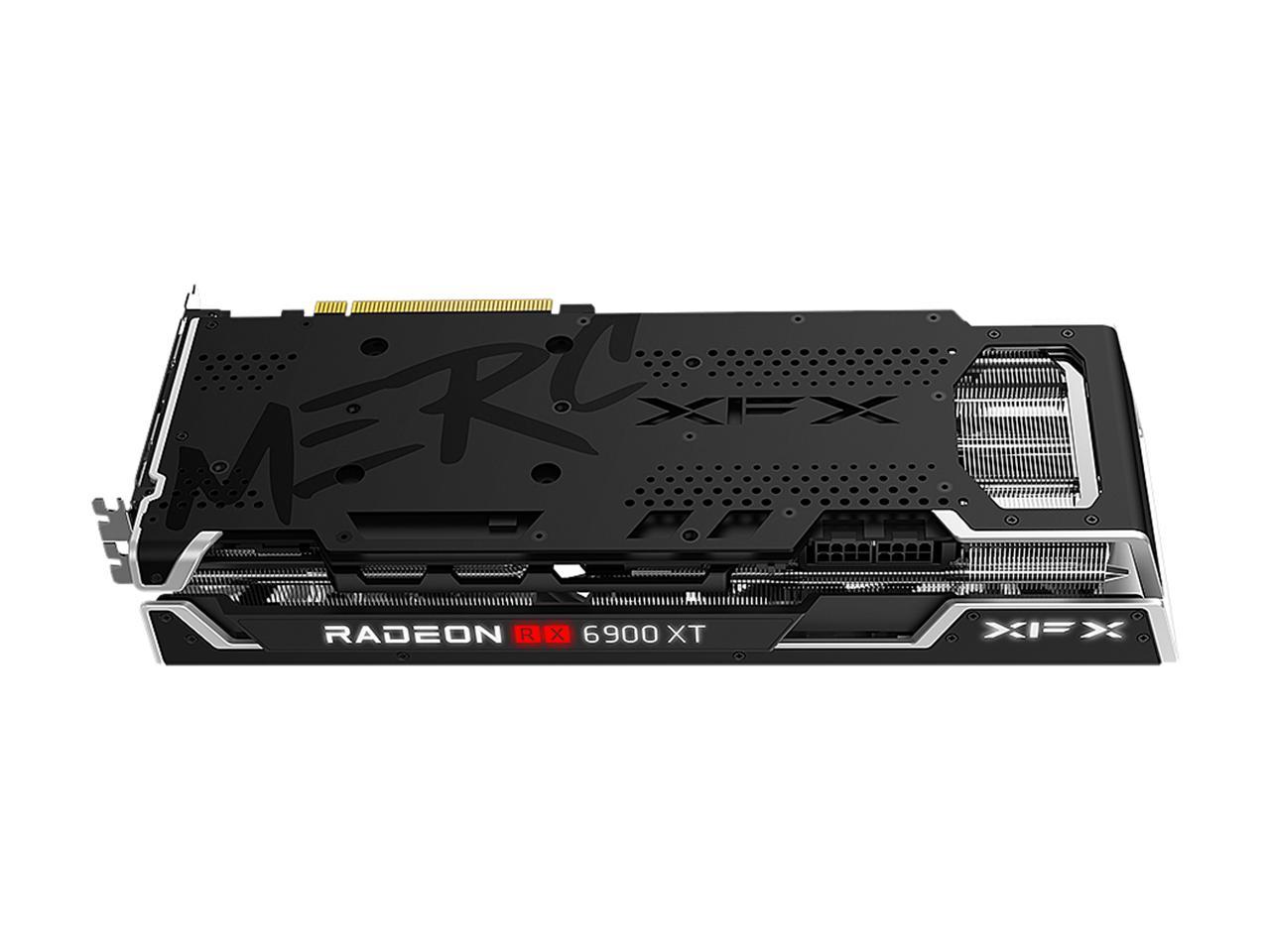 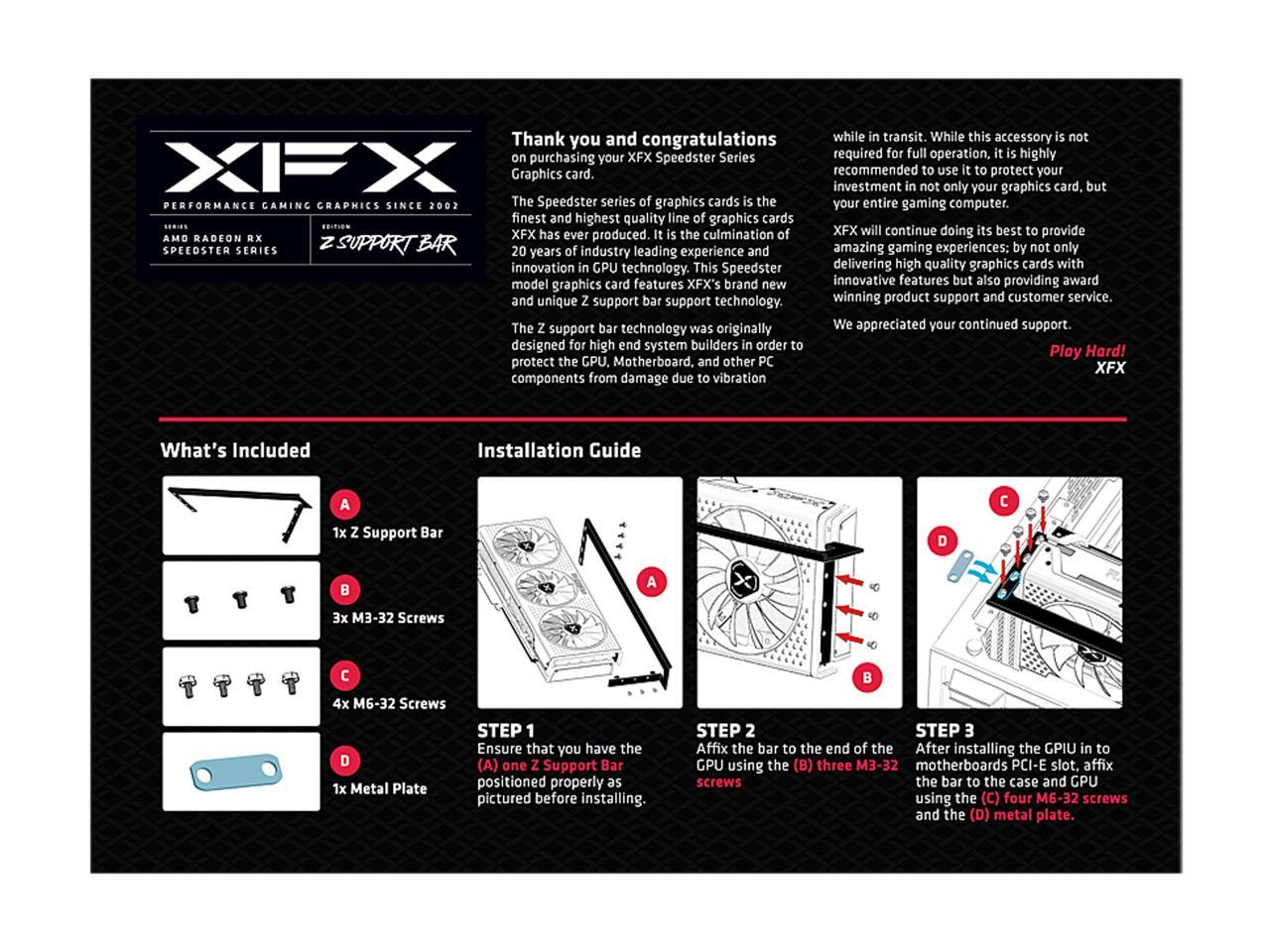 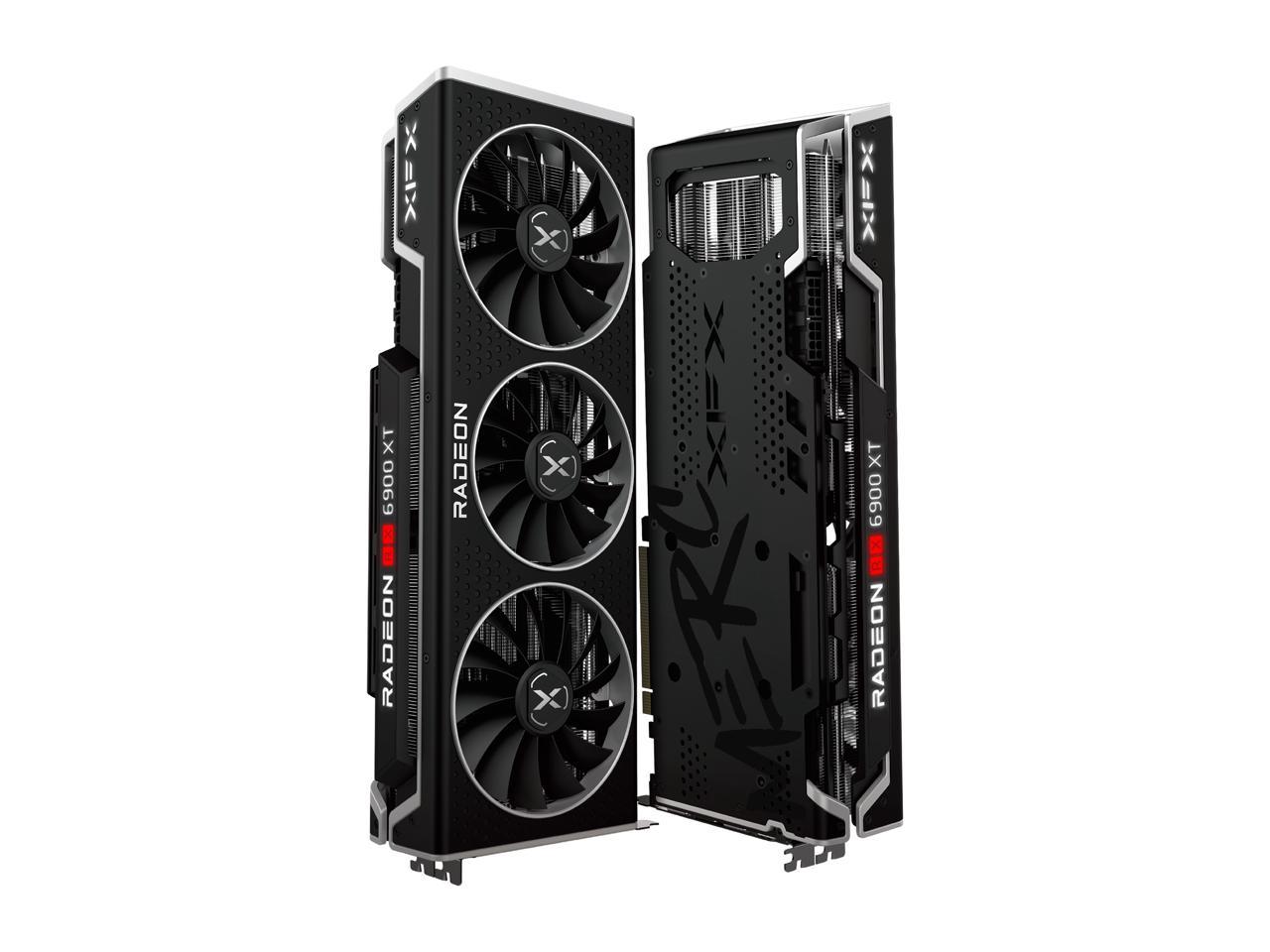 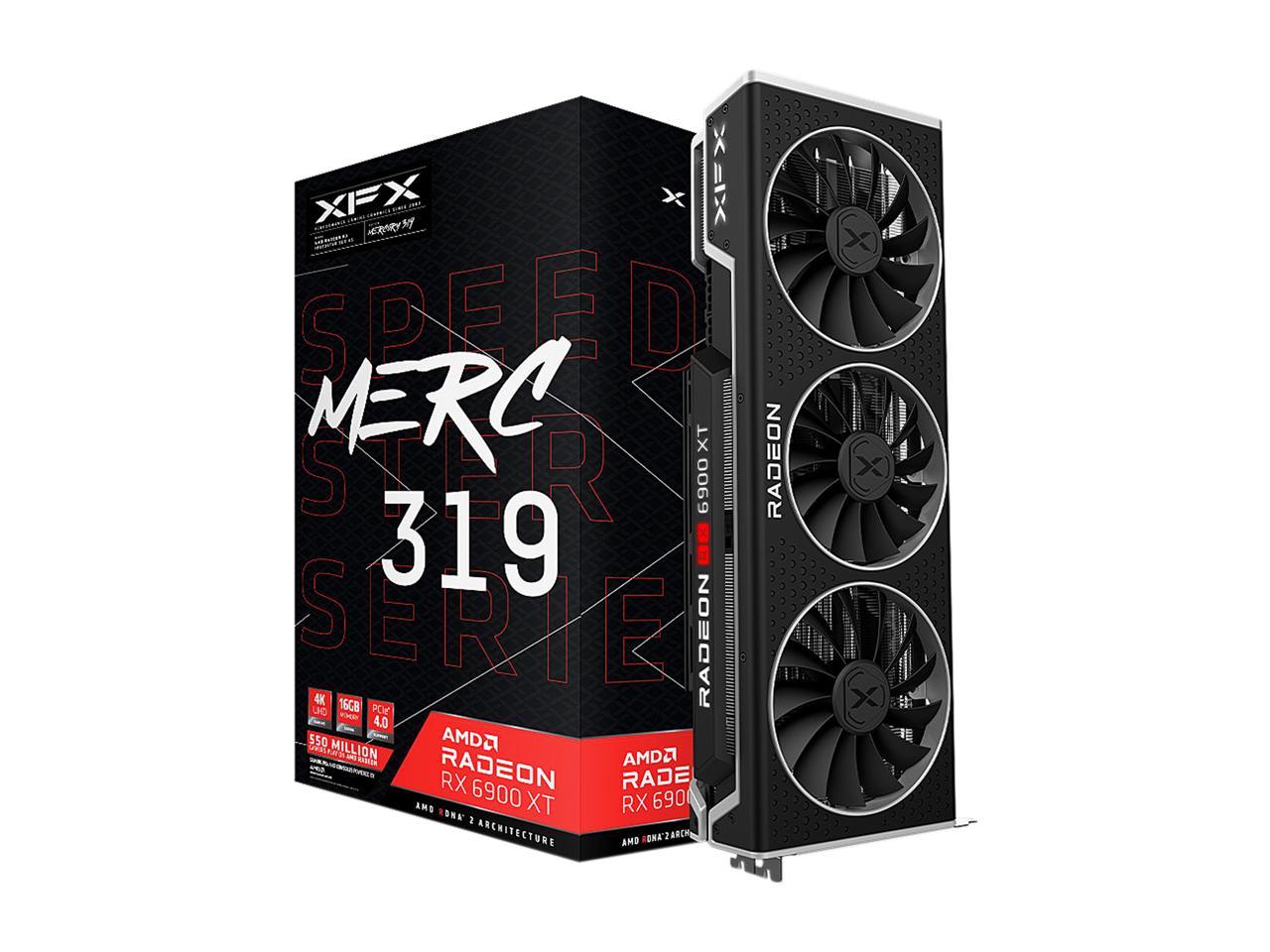 Introducing the AMD Radeon RX 6000 Series graphics cards, featuring the breakthrough AMD RDNA 2 architecture, engineered to deliver powerhouse performance for all gamers. The AMD Radeon RX 6900 XT graphics cards power a new generation of competitive and 4K gaming with vivid visuals, and elevated experiences in every game and every frame.

BOOST CLOCK (MHZ), UP TO

Finding the balance between a good looking card and maximizing it's performance is an art. Where we could improve airflow, we did it, we opened it up while keeping the design clean and cool. The MERC 319 6900 XT features an all black logo backplate.

XFX maximizes the cooling effectiveness of our cards by increasing the number of thermal padding throughout the card. This includes thermal pads on all VRM's, Memory, and GPU on all sizes of the PCB board. Ensuring stable high quality performance.

We know enthusiasts like options, so for our MERC 319 RX 6900 series graphics cards we are offering dual BIOS. Giving a backup BIOS in the case of a failed BIOS update.

14+2 Phase Power Design implements a larger V-Core than the AMD reference spec so it's able to provide you with more stable gameplay by better distributing power across more VRMs which results in more headroom. This allows the GPU to operate cooler at baseline but also have tremendous room to overclock.

Get more performance in select titles through new levels of communication between AMD Ryzen desktop processors and AMD Radeon graphics cards over PCI-E 4.0.

Learn more about the XFX RX-69XTACSD9

Overall Review: This GPU is huge, but looks great and feels good in your hand. Barely fit in my Phanteks Eclipse 200a but - it did! Mine had one fin that was slightly bent but it was an easy correction. I honestly hate to leave a review because I wish I could forget spending this kind of money but - hey, it's a beast of a card and if you can stomach the price it's absolutely worth getting. Excuse the cable management in the picture, as this is purely just to show how it fit in a mini-ITX case.

Pros: Seems like solid build quality from XFX. Says boost clock is 2485 hz which I wonder if this has the XTXH chip.

Cons: Hard to find a waterblock if youre into that, Bykski has one available though. Price obviously, but it is what it is. Still cheaper than 3080 Ti or 3090 but I cant compare to those cards since I havent owned one. Not a con of the product but I thought Id mention I spent 700 bucks on a monitor a few years ago and just realized its only Gsync and not Freesync. I may be looking for a new monitor

Overall Review: First time with an AMD card. Decided to grab one since I dont see 3080 Ti or 3090s becoming available for a decent price anytime soon. Just installed it today and played for about 15 mins so this is based off a short period. I mainly play FFXIV at 1440p. Settings maxed out and stays locked at 144 hz and fans barely spin. Card was probably overkill for what I do but so far everything is butter smooth. Will see how things hold up over time. Got a waterblock for it too but Im kind of falling in love with original heatsink and fans. Another thing to keep in mind is the size. Just make sure it fits your case.

Overall Review: I had this card under two thousand. Well, when I see a 67 for a thousand that makes me feel I did not overpay too much. Taking into account the prices of the new GPUs everywhere, I think this one is one of the best value in the market right now.

Pros: Large and makes use of almost all of the space for cooling. Excellent cooling when Idle and light to medium gaming. The simple estetics makes for a great look in any case. Good temperatures in most situations. Perfomance is great in all games I played with high to ultra settings. A good starting point for overclockers.

Cons: Large size makes for a difficult time installing it into a crowded or compact case. Can get loud under heavy loads but the cooler seems to handle the temps well. Heavy but it comes with an extension bracket for additional support. Perfomance is ray traced games are a mixed bag. Expensive even when you account for inflation.

Overall Review: I recommend this product to anyone who play a lot of demanding non Ray-tracing games on a 2k-8k freesync monitors. Make sure you have a good quality 850W or higher power supply.

Overall Review: It is loooong gpu 340mm It is xtxh chip Looks has good headroom for overclocking with lc

Pros: Best high-end graphic card with out the Newegg shuffle at the moment.

Overall Review: Would by it if you need it at the moment

Cons: Not MSRP! But lowest price 6900XT I have found on new egg that is not a part of the shuffle you can never win.

Overall Review: I can now play games on my 34 inch ultra wide 3440 x 1440. I have tested a handful of games and they all run smooth. Cyberpunk runs around an average of 80fps and ultra settings in 2k. I wanted the fastest AMD card. Not sure what is up with NVIDIA lately with my eyeballs, but anything above a 1000 series cards gives me a headache and makes me feel nauseous playing games. I tested with a 5700 XT and I did not have that problem. Hoped for the best when I got this card and sure enough I can play games again.

7 out of 10 people found this review helpful. Did you?