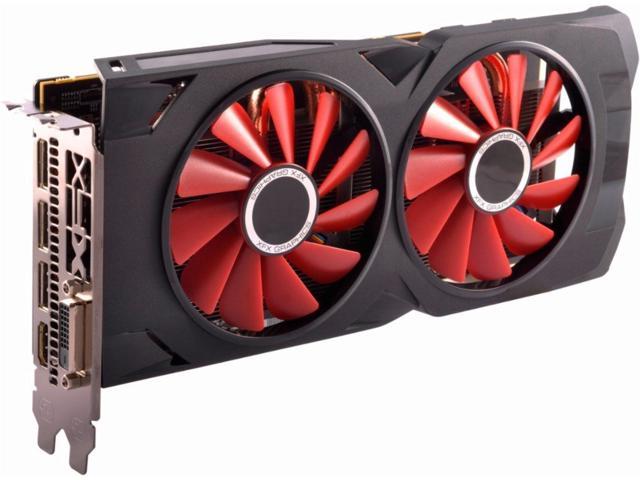 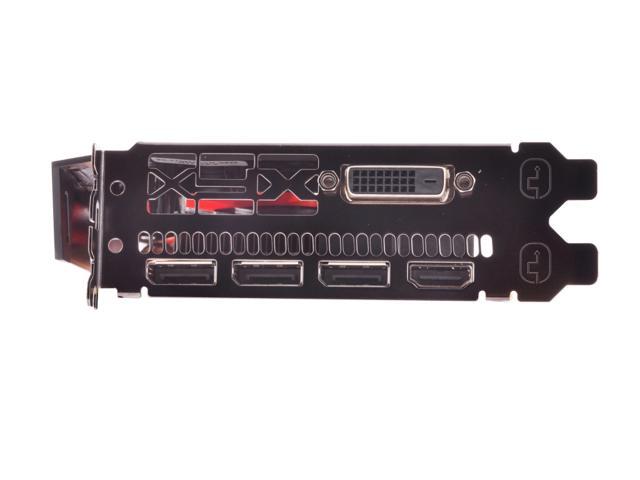 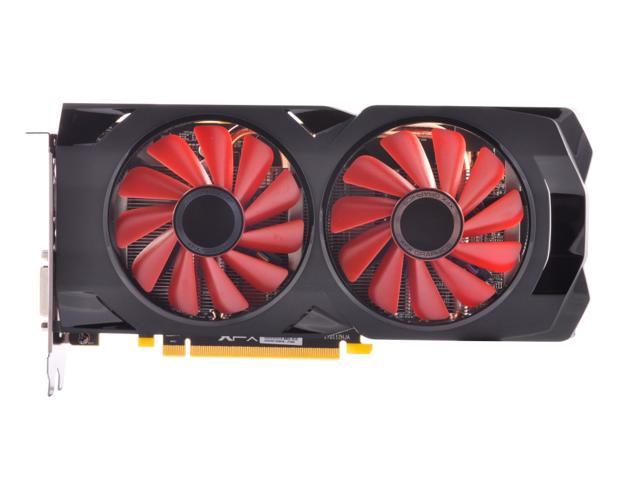 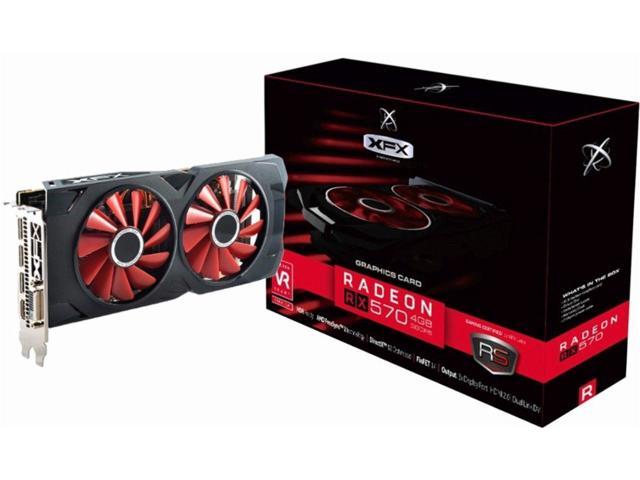 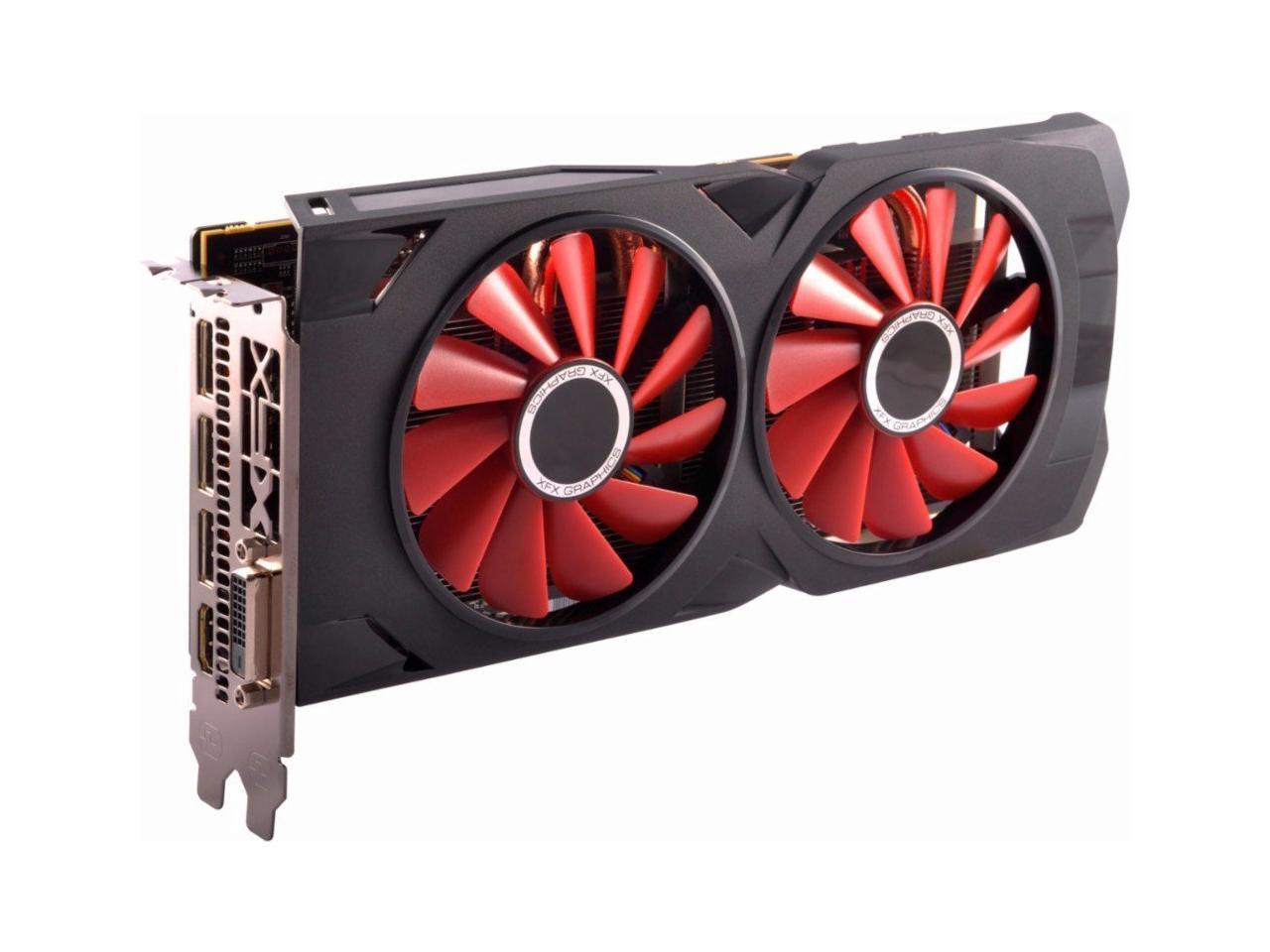 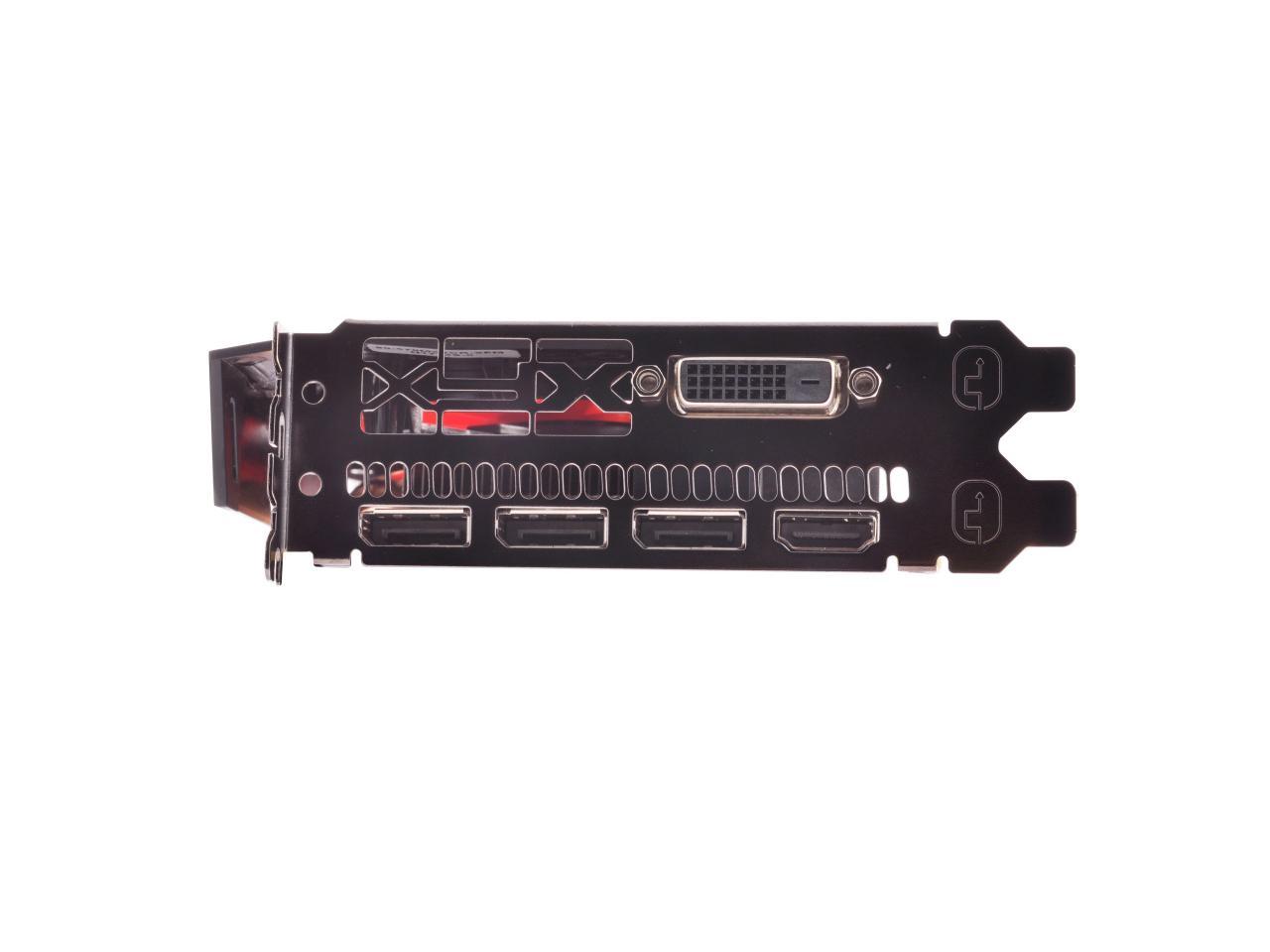 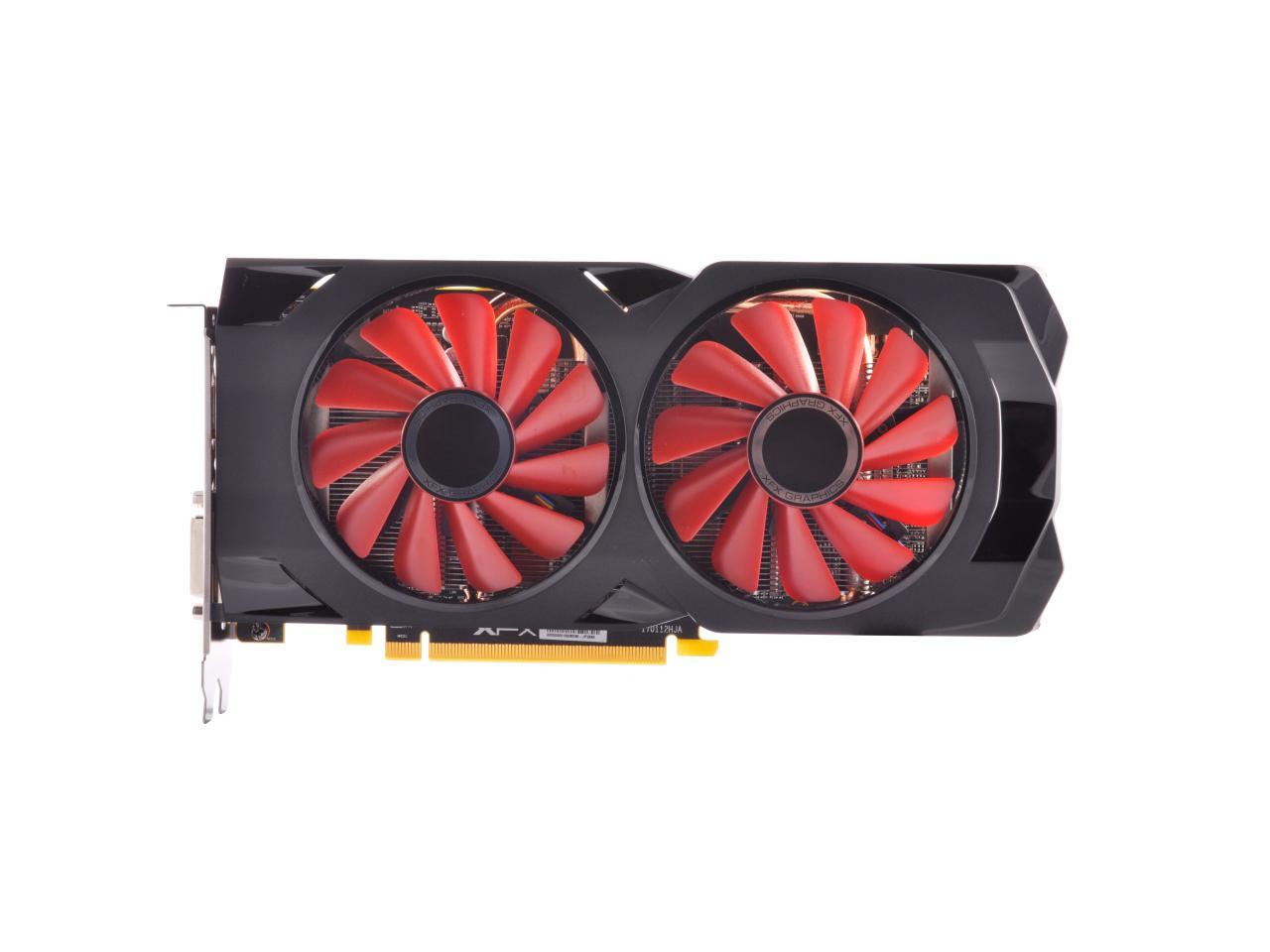 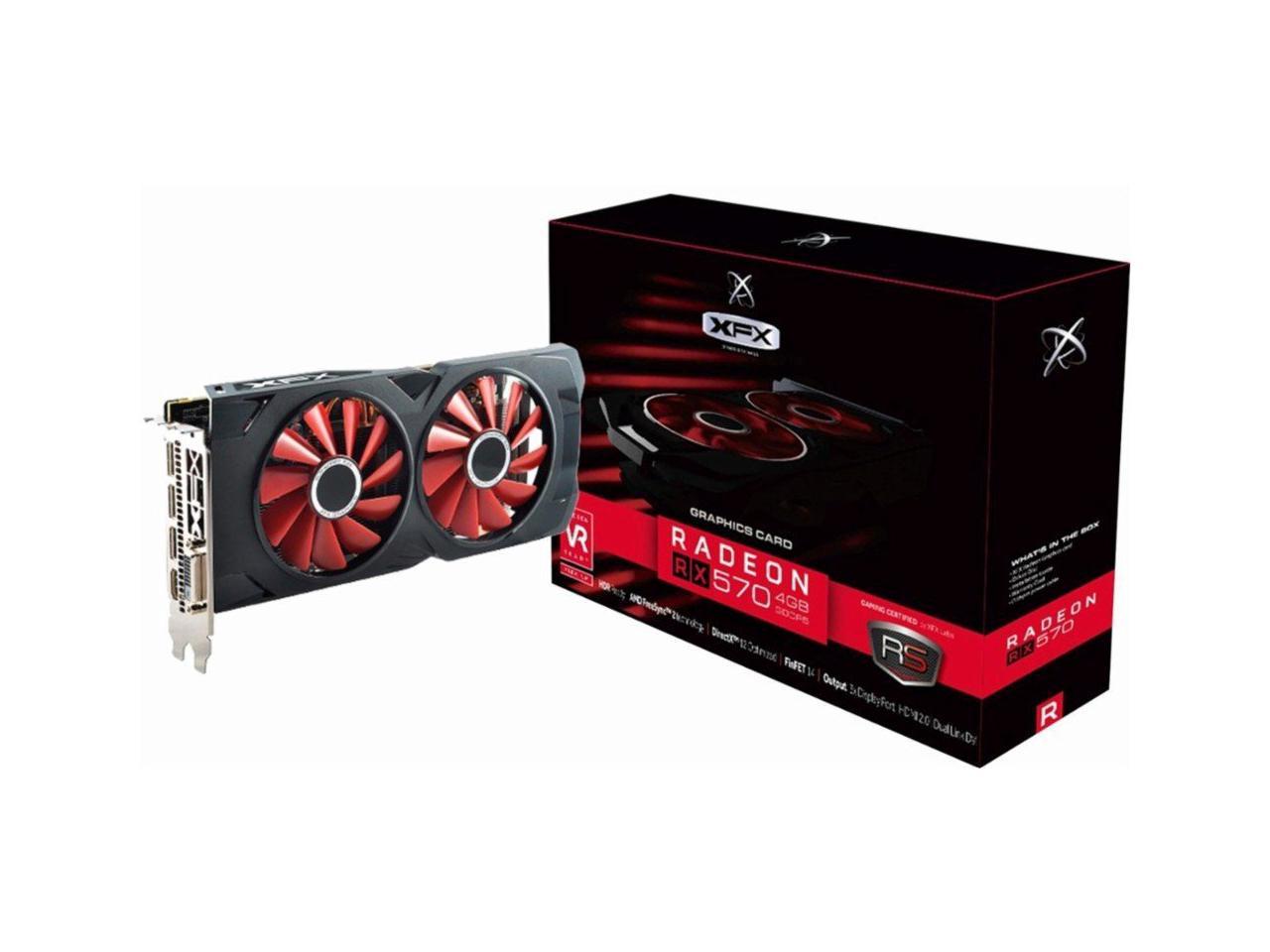 XFX Radeon RX 570 RS series video card is based on the revolutionary AMD’s Polaris architecture with 14nm FinFET for enhanced performance and efficiency. The card is factory overclocked by XFX and has endured rigorous testing to ensure stable peak performance. Get a total immersion in 4K, HDR or VR gaming with silky smoothness and realistic effects. Heat will be effectively dissipated with advanced thermal design. Together with technologies like Radeon Chill and Radeon Relive, this card will take your gaming experience to the next level. With Dual BIOS, you can even use it as a mining card. Equipped for gaming and mining

XFX knows enthusiast like options, our RX 570 and 580 graphics cards are shipped with a Dual BIOS. If you want optimal gaming performance just install it and go. For cryptocurrency mining, simply shut the system down and flip the BIOS switch on the card. Our mining BIOS is already tuned to give increased mining hashrates without hassle. While True Clock locks in a super fast optimal speed on a hardware level, RX Series cards with an OC+ rating are tested at the factory to go even beyond XFX's True Clock. XFX encourages you to try these factory tested speeds by using the simple to use AMD Wattman utility, letting you squeeze every last bit of performance out of your card.

Radeon Chill is an intelligent power-saving feature for Radeon graphics that dynamically regulates framerate based on your movements in-game. During peak gameplay, Radeon Chill works to deliver the full framerate potential of Radeon graphics. As movement decreases, Radeon Chill reduces your gameplay framerate. Designed to save power, lower temperature, and increase GPU life, Radeon Chill enables high performance graphics when you battle and saves power when you explore. The XFX RX 570 RS series features our all new Unibody VRM Heatsink construction which enables direct transfer to the primary heatsink and heatpipes. This unique combination of material and construction enhances thermal efficiency by a total of 40%.

*Image for representation of technology only, actual heatsink will vary by model. GPUs are one of the most important, complex and delicate pieces of hardware in your computer and as a game, nothing is as important and the slightest bend can drastically affect the performance of your graphics card. But that's a thing of the past because XFX's solid backplate keeps the card strong and secure, eliminating card bend. Graphics cards also emit some heat from the back as well which rises up and affects other components but our cool aluminum backplate can absorb that heat and keep the overall case cooler. After countless hours of research, development, and testing our engineers have developed all new VRM and Memory cooling technology, reducing VRM temperatures by up to 30°C and GDDR temperatures by 20°C, all while reducing noise by an additional 5%. Best in class for the GPU enthusiasts.

*Image for representation of technology only, actual circuitry will vary by model. We combined technologies to create the first super heatpipe.

The new composite heatpipe design used in the XFX Radeon RX 570 RS combines the technologies of both Liquid and Capilary Action heatpipes into one. Doing so allows us to increase the total heatpipe surface area by 30% which tremendously increases the thermal efficiency. No stuttering. No tearing. Just gaming. Gaming shouldn’t be a choice between choppy gameplay and high performance. With XFX Radeon RX RS Series graphics and FreeSync technology, it doesn’t have to be. Transform the most demanding games into a liquid-smooth, artifact-free, 4K cinematic experience with the highest performance at virtually any frame rate. FreeSync works at the speed of your game for incredible responsiveness and uncompromising smoothness. Every gamer deserves perfectly smooth gameplay and peak performance. Unlike the competing technology, you don’t have to choose with FreeSync technology.

New features and functions bring new computing experiences to life with AMD Radeon graphics on the Windows 10 platform. Take your gaming further with XBOX ONE on Windows. Play and connect with your games and friends. Everywhere. Unprecedented efficiency on next gen GPUs

Expand your territory and customize your field of vision. Connect up to six displays on a single GPU for dynamic, panoramic multi-screen gaming. You’ll get an expansive experience that’s truly out of sight. (Additional displays may require the use of MST hub.)

Tuned By XFX for Peak Performance

Giving you the performance you have come to expect from XFX.

Overclocking your card to its peak performance potential is not an easy task but a stock card is simply under-utilizing your graphics card's full potential. Luckily for you, XFX has factory overclocked the RX 570 RS at the BIOS level and has fine tuned it for optimal gaming performance. Our state-of-the-art equipment and testing labs ensure that your card reaches its maximum performance level safely and optimally. Expand the range of colors.

Premium HDR - High Dynamic Range (HDR) is a state-of-the-art technology for gamers and cinephiles that care deeply about the display quality of their TV or monitor. Modeled after the acuity of human vision, HDR vastly expands the range of colors and contrast ratio that can be shown by compatible displays. HD-Rready games and movies played on an HDR display appear strikingly sharp, colorful, and vivid, with enhanced contrast and sophisticated nuance compared to even the most stunning SDR content.

The Radeon RX 500 Series graphics card’s brand new display engine and HDR ready capabilities equip you for the new wave of HDR displays, content and the future of gaming. A premium set of driver utilities.

As sophisticated as the Polaris architecture based graphics cards are, the software that powers the cards is equally as sophisticated. Radeon Software delivers the ultimate in performance, features and stability to help ensure an exceptionally smooth and fast out-of-the-box experience.

With Radeon WattMan (formerly AMD Overdrive) – Push your hardware to the limits. Radeon Settings takes customization to a whole new level with per state control over clocks, voltages, and temperature. Radeon GPUs with the Polaris architecture support HDMI 2.0b and DisplayPort 1.3 for compatibility with a new generation of monitors that would make any gamer excited:

Experience resolutions up to four times higher than HD and see everything your opponent throws at you without sacrificing a single detail. Great performance, even on the go.

AMD XConnect unlocks the best of both worlds on systems designed for Thunderbolt 3 eGFX enclosures. Finally you can use a desktop graphics card on a notebook.

Learn more about the XFX RX-570P4DFDR

Cons: Black and Red isnt my color scheme, but i dont really look inside my computer so, meh.

3 out of 3 people found this review helpful. Did you?
Manufacturer Response:
Hello, Thank you! We appreciate you writing this review. If you have any issues moving forward, or any questions, please contact us at xfxsupport.com. Cheers Mark at XFX neweggsupport@xfxforce.com
Edward C.
Ownership: 1 month to 1 year
Verified Owner
So far so good!6/21/2019 10:05:14 AM

Pros: I liked the price. So far it is running great. Only had about a week up and running due to having to get an adapter for the power connector.

Cons: I needed to buy a adapter for the power plug as my computer only had the Sata type power plugs. Other then that the shipping takes a few weeks.

Overall Review: With the power connector being just as much my fault for not looking in the case to even see if the power cord was compatible. I had taken for granted that it would come with what I needed. I would diffidently recommend this video card as the price was the best I could find.