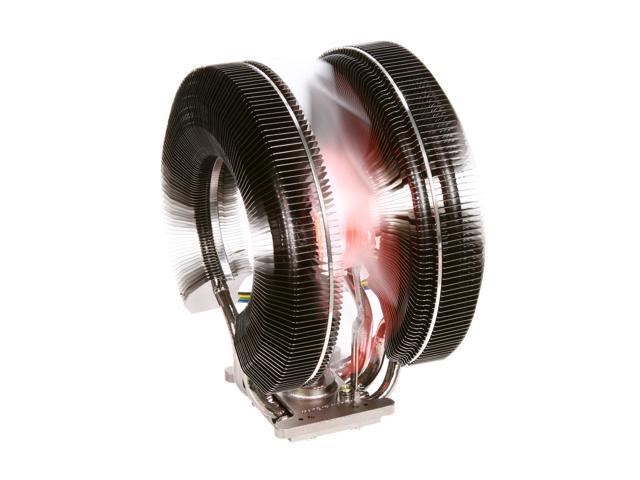 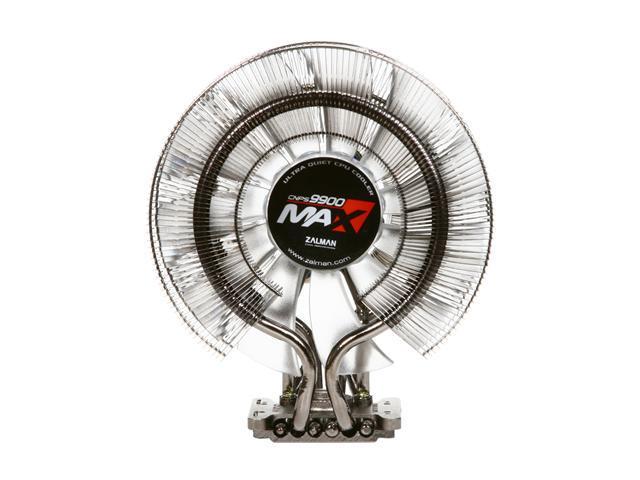 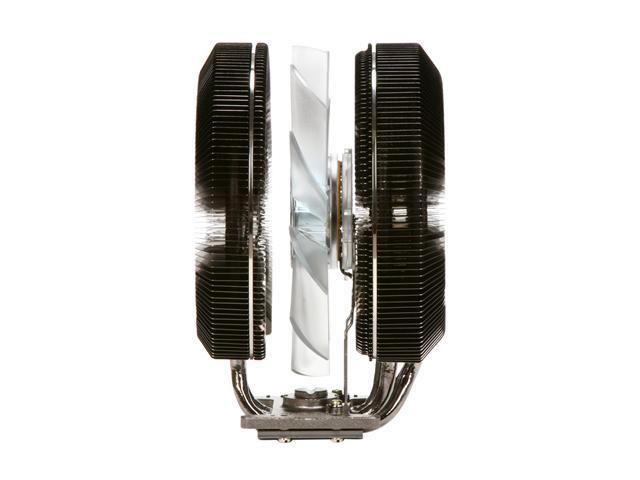 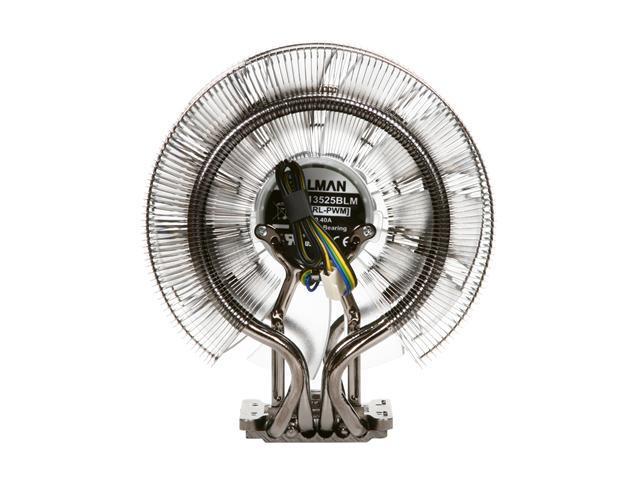 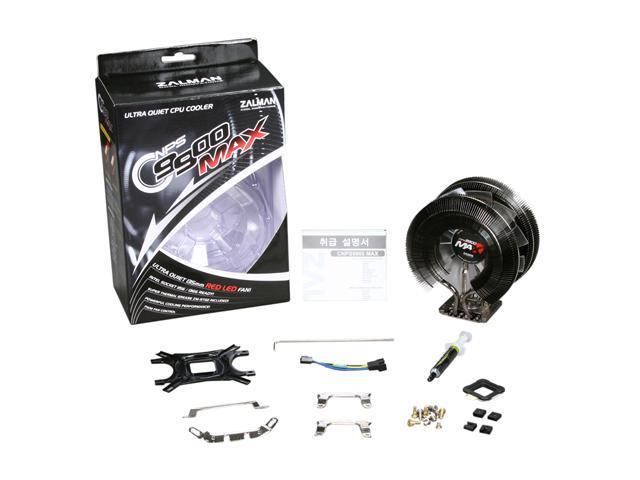 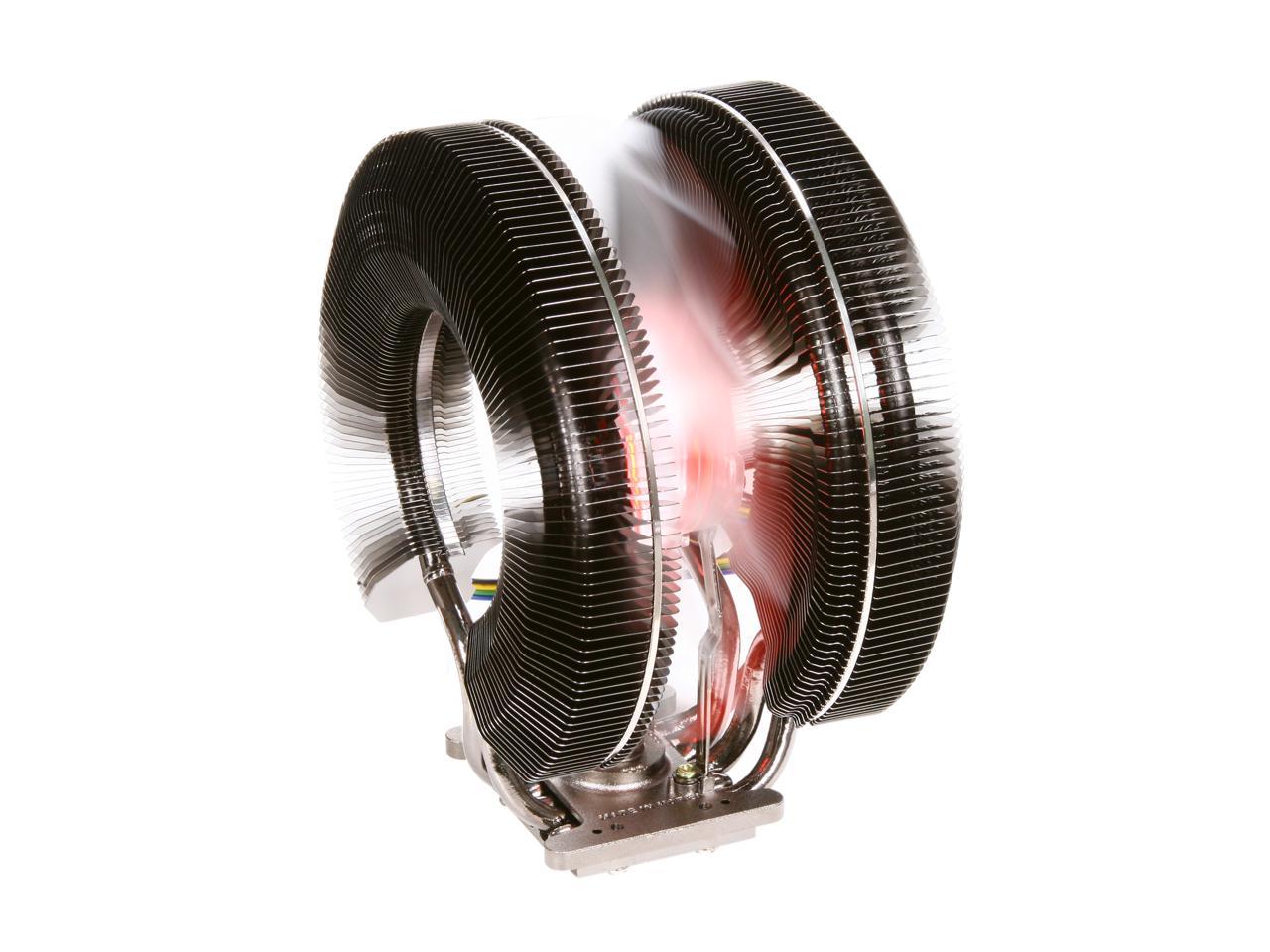 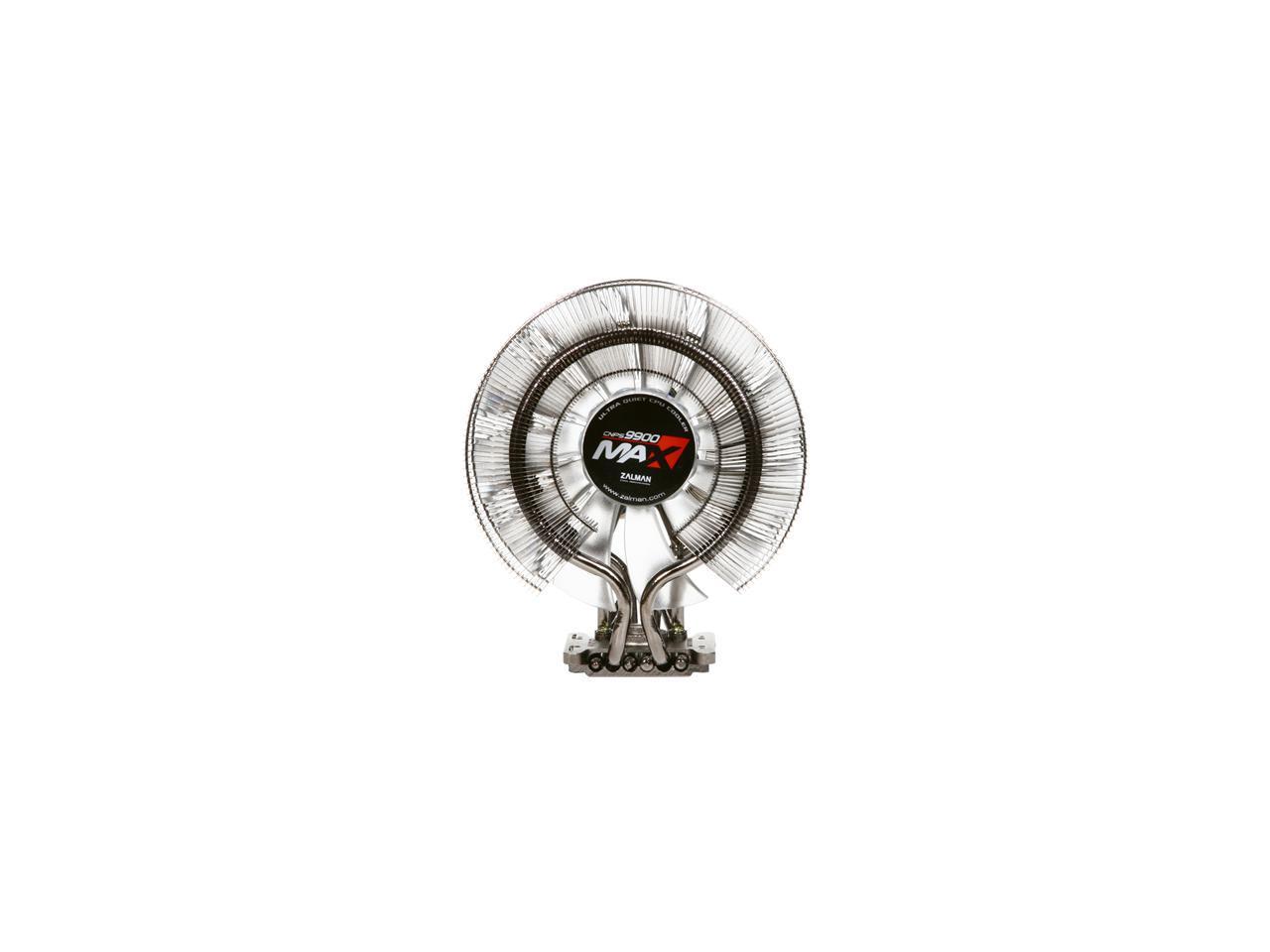 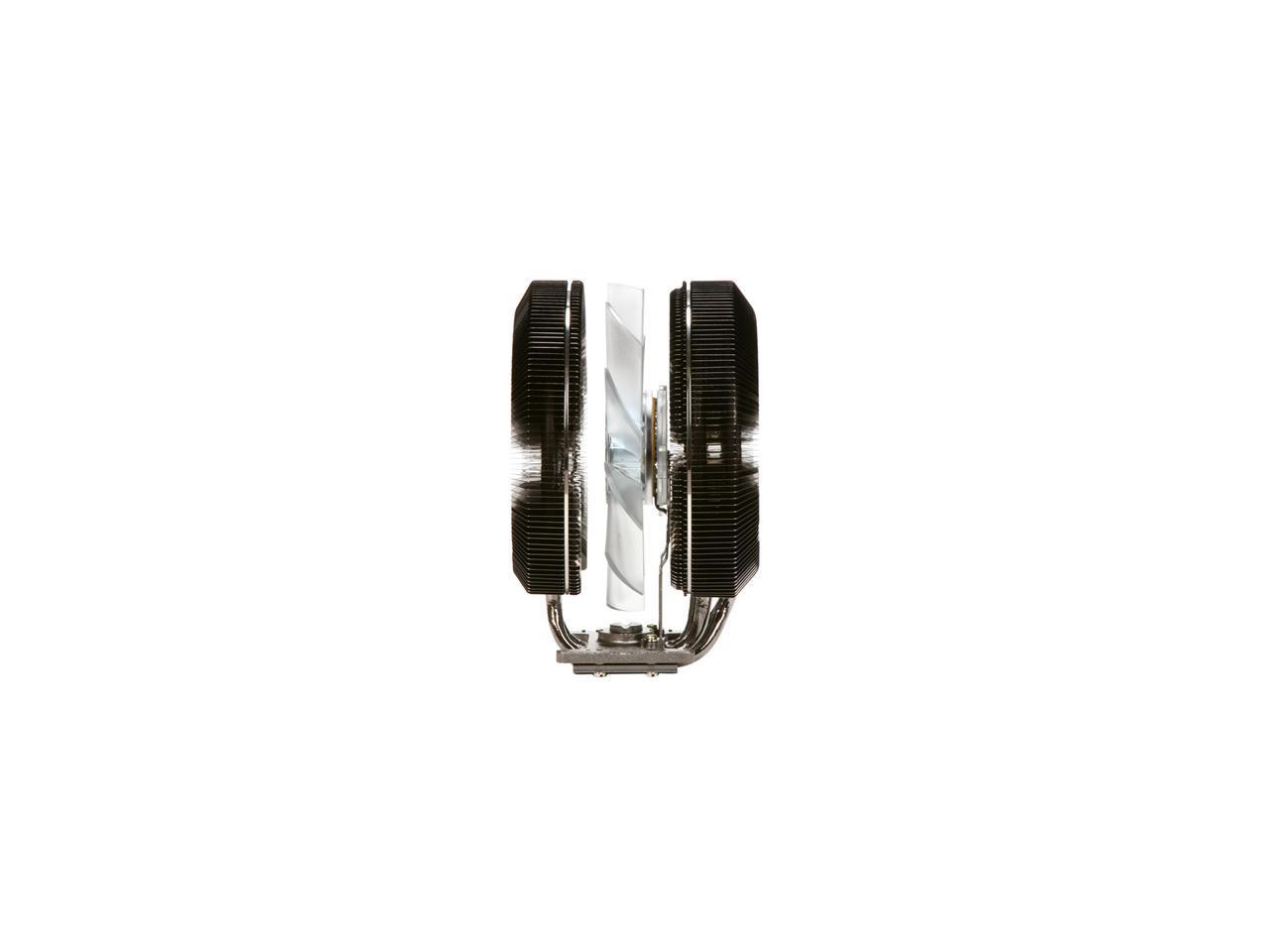 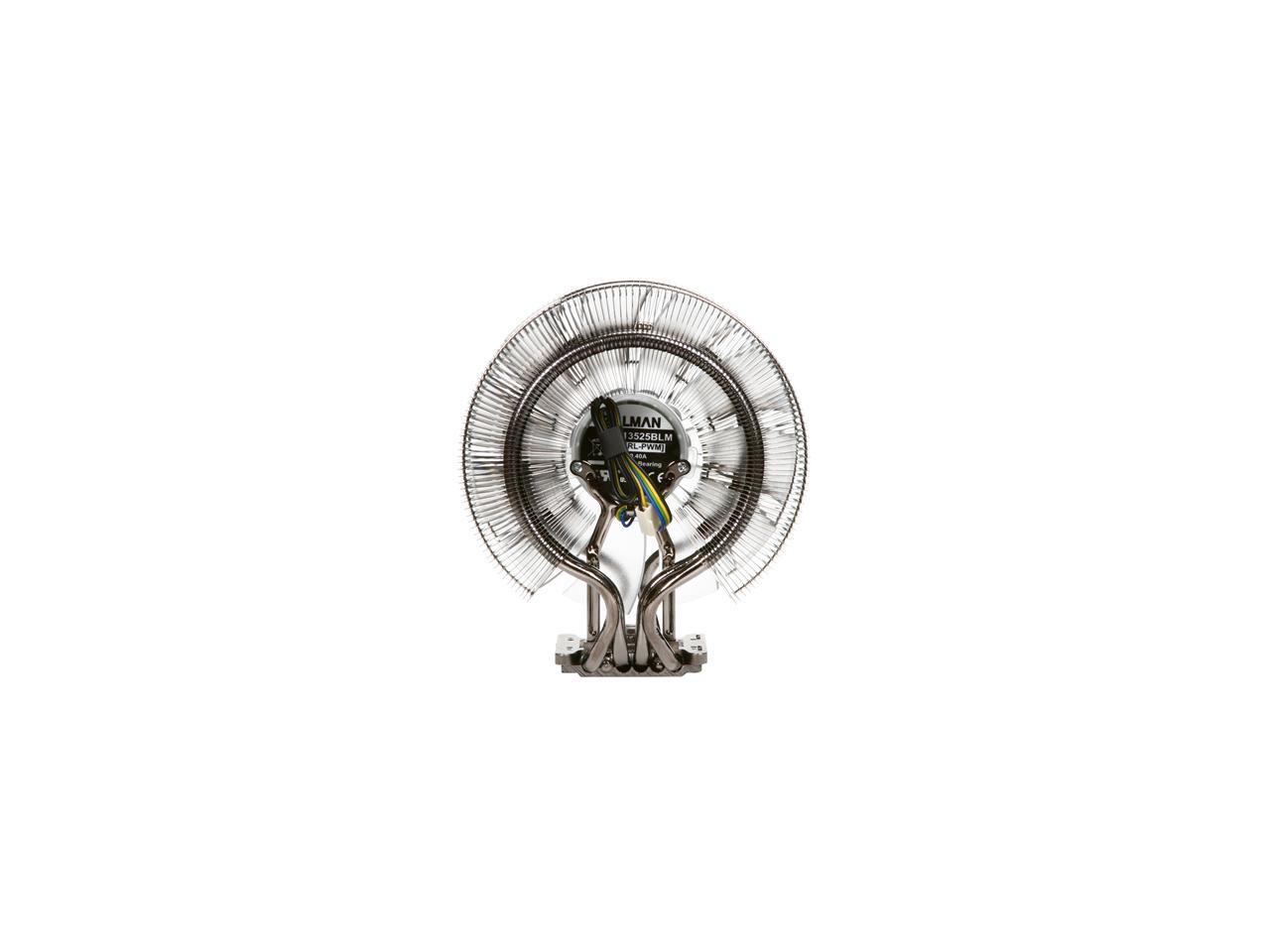 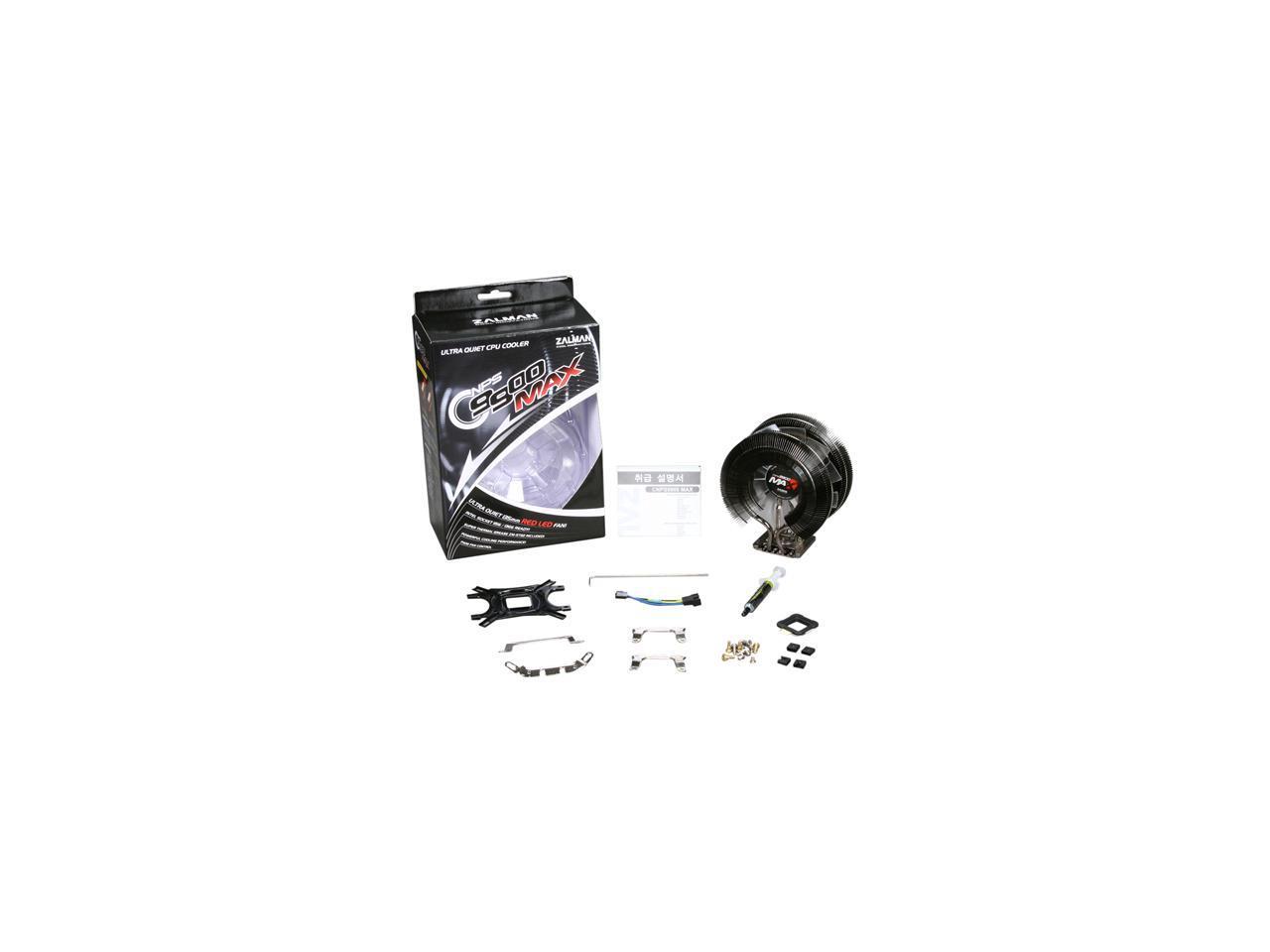 (267) Write a Review
See more "zalman cpu cooler"
In stock.
Ships from China.
Most customers receive within 3-16 days.
Overview
Specs
Reviews
The Zalman CNPS9900 MAX-R combines some of the most advanced technologies in the market used for CPU coolers to create powerful cooling performance. The CPU cooler utilizes composite heatpipe which is 50% more effective in transferring heat compared to ordinary heatpipes. Combined with a whisper-quiet 135 mm red LED PWM fan positioned between two massive nickel plated pure copper heatsinks, the CNPS9900 MAX-R is more than enough to satisfy overclockers and users who are looking for ultra powerful cooling performance in silent operation.

Cons: *Didn't seem to offer much more cooling than my old 9700... Temps stayed approximately the same with 35-38c idle with my Phenom II x4 956 @ 3.4 GHZ Under load it doesn't go over 46c - the 9700 would hit 49c or so max under load... marginal performance improvement. I had a hell of a time trying to mount this without watching a video or checking the website - I gutted out my old chasis and put all my new parts into the new chasis so I didnt have internet during the install, but I eventually figured it out after reading the directions 30 times! Personally - I liked the latch system the 9700 used...

Overall Review: ***WARNING*** If you are mounting this to an AMD board - MAKE SURE YOU WATCH A VIDEO ON HOW TO DO AND I STRONGLY RECOMMEND HAVING SOMEONE ELSE HELP YOU IN THE PROCESS!!! You will need: *Patience *An allen wrench (approx 3/16 in diameter) *A helping hand or two *A sandwich The LED light is really not that noticeable unless you look at it from a certain angle, the blue is much brighter. Make sure to do a test mount before applying your thermal compound/grease!!! Overall, I give it 4 eggs for marginal performance improvement... all the other things I mentioned just come with the territory :p

Overall Review: Install is involved, read manual a few times and do a mock up before applying thermal grease and torquing down bolts

Pros: Will not interfere with MOSFETs, heatsinks, RAM. Notice how few complaints there about such in the reviews here compared to other CPU heatsinks. The rare complaints here are likely the result of a perfect storm of bad motherboard design and excessively large RAM. Weight-to-perfomance ratio. The CNPS9900 Max weighs 755g, but can compete with the best 1kg heatsinks. I suspect it has something to do with the composite heatpipes. Either way, it's good news if you're worried about CPU cooler weight bending the motherboard. Straightforward install process. The user manual was easy to follow. I spent more time taking out the motherboard than performing the actual installation. Comes with a tube of Zalman's ZM-STG2 thermal compound. Its performance is comparable to Arctic Silver 5, the famed thermal compound which all others are compared to. The CNPS9900 Max-R's red LED is tastefully bright. This is rather subjective, so if LEDs are important to you, look up a few videos and de

Cons: Backplate is reasonable but could have been more elegant. You will need access to the back of your motherboard. Would be better if the backplate could be secured onto motherboard before mounting the heatsink. Minor annoyance, but see TIP #1 below. Height. 135mm fan should be a tip-off. Heatsink is a little shy of 160mm. Fits in a NZXT Zero case with about 1cm space from the side panel fans. May have to re-route wires inside case around heatsink. Weight. 755g is still heavy. Not entirely a bad thing since it's the result of the heatsink being pure copper, which has better thermal conductivity than aluminum. Also, its mass aids heat transfer. But even with a backplate, you will want be extra careful when moving your PC after this is installed. You might want to tie a string or two from the heatsink to the upper supports of your case. Backplate installation isn't worth docking a point. The other two cons are endemic among upper-end CPU coolers so senseless to deduct for that.

Overall Review: Composite heatpipes and a shape that doesn't block things on the motherboard makes for greatness, but I think Zalman can make a shorter (under 150mm height) and lighter (closer to 500g) heatsink without sacrificing too much performance. Also comes in a blue LED version, CNPS9900 Max-B. They're priced differently here on NewEgg. Guess it's supply-and-demand. TIP #1: An easy way to align the backplate with the motherboard is to hold the latter sideways. Move the plate into place and screw the bolts a little into the openings. The mobo can now be turned flat with plate aligned underneath. TIP #2: Note the roundish tip on the long end of included Allen wrench. Use it to screw the heatsink. The grip isn't as good, so be careful not to strip the screw heads. Use the short end later for a better grip to tighten. Attempting to screw with only the short end will take forever. TIP #3: RC7P resistor not needed unless mobo lacks PWM. Everyone else, remember to adjust the fan speeds in

Cons: It is a bear to install.

Overall Review: Considered just putting the stock fan on but I'm glad I didn't. The installation of this fan tests your patience but it's well worth it.

Pros: If you are looking for quiet air cooling with the sexy look that would get you laid if you could manage to set down that keyboard, then this is the cooler for you. Red LED is not overpowering but radiates a nice menacing glow. I found the assembly instructions and process to be both adequate and quite easy.

Pros: Installing for an AMD socket board may be the worst I've experienced (the installation manual is even worst?) but with help from customer service and some parts, I'm up and running. Keeps a AMD FX-9590 Vishera 4.7GHz Socket AM3+ 220W 8-Core CPU running at about 31C in the Zalman H1 case.

Cons: As mentioned, the AMD installation is tough. The manual leaves a lot to be desired. Intel may be a dream though.

Overall Review: For cooling this is the bomb. The red led business of the fan is subtle. It's actually quite small for 220watt cooling. The Cooler Master V8 GTS (I love by the way) is a monster compared side by side with it. The 'be quiet! DARK ROCK TF' may be my favorite 220w cooler though.

Pros: On long hard gaming runs (BF4) on an 4th gen I7, the temps have reached a max of 45C, or 113 F with this cooler. The case is a Thermaltake, G10 Snow edition, ROG Formula board, SLI GTX 670's. The case may help with all the fans keeping the CPU temp down this low. It is very quiet, love the design, and red LED is a nice addition.

Cons: Seen some complaints on the install, there, black holding clips have to be installed with the bolt in them, and then slid onto the lower bracket, otherwise you will wonder why they did not provide long enough screws. Once I got that right, and followed the same bolting pattern for the 1155 socket for my 1150, it worked just fine. Not really any cons to speak of, just make sure you have a wide case, it stands over 6 inches high.

Overall Review: I would use this fan again in another build, the only thing better that would be considered would be a liquid cooling solution.

Pros: Right, so I'm sure you're reading all of those "waaaah! It's so hard to 1nstallll!" Don't know what those toders are crying about. If you've never opened your pc case before then yes, this might be hard.(if so get a bro or go back to consolas)Barring that. It's a breeze. Mounted it on an i3 and my 8350 without issues. Further, she keeps it netflix and chill, never going above 38c on the fx with 4.6ghz oc under load.

Cons: Bit on the 'spensibe side, but water cooling is worse at this price point. She did beat my old cooler master by up to 15c so you're getting what you pay for.

Overall Review: Few parts can stand the test of time in the technocracy. This is the exception. Buy it now and bathe in the crimson light of the PC Master Race.